With the remnants of Typhoon Songda sending a series of storms over the Pacific Northwest we were wondering what kind of conditions we’d be hiking in as we headed out to the Columbia Gorge for our 56th hike of 2016. The storms had not lived up to the dire predictions we had been hearing but there had been a good amount of rain and some stronger than normal winds over the previous couple of days.

Our goal for this hike was Nesmith Point, a 3800′ climb from John B. Yeon State Park. 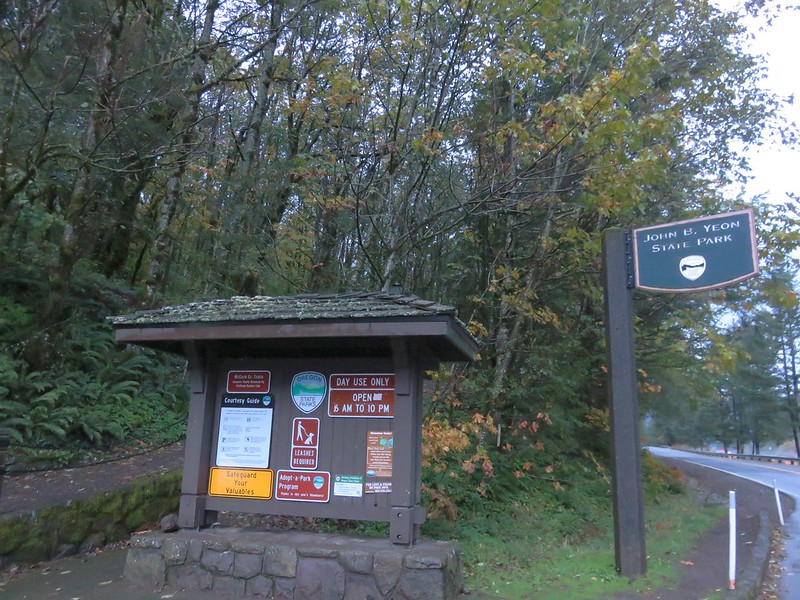 We had started at this same trailhead in March 2015 when we visited Elowah and Wahclella Falls. The trail set off uphill from the parking area where it promptly forks. 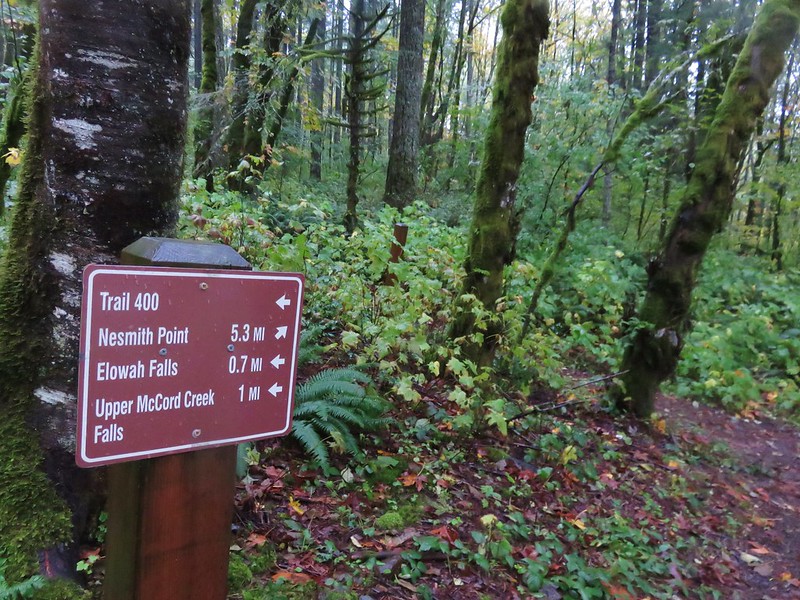 We hadn’t originally been planning on revisiting any of the waterfalls from our previous visit, but the recent rainfall piqued our interest enough that we decided to hike the .7 miles to Elowah Falls before heading up to Nesmith Point. There was definitely a lot more water pouring over the basalt now. 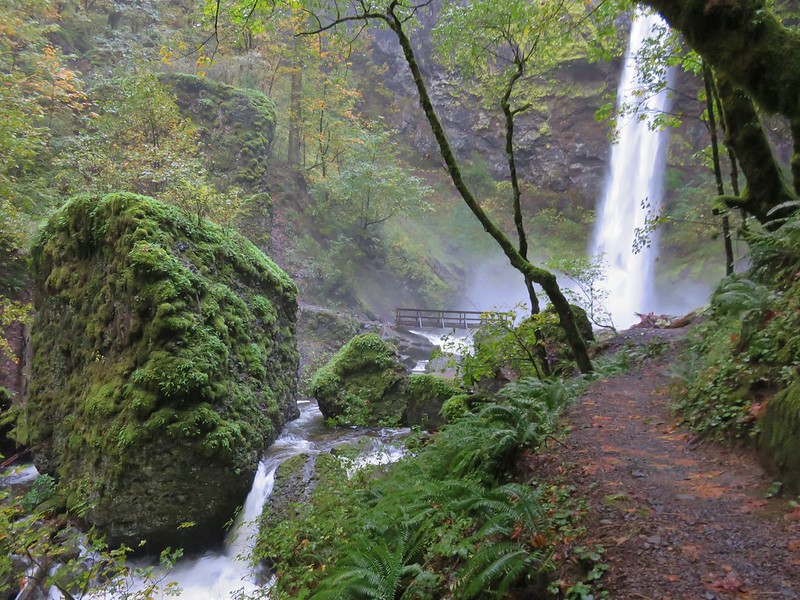 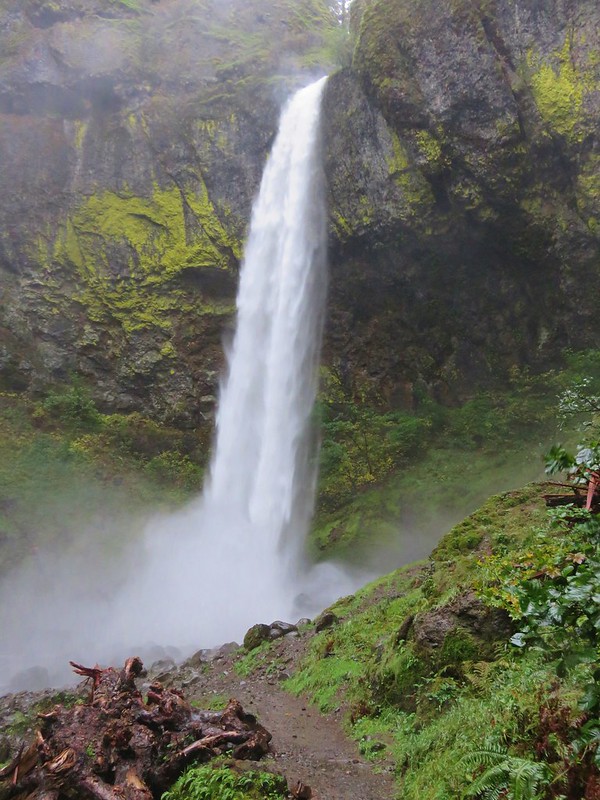 One of the great things about Elowah Falls is that the Gorge Trail crosses McCord Creek on a footbridge very close to the waterfall’s splash pool. Crossing it was literally a blast as wind and water sprayed out from the thundering waterfall. 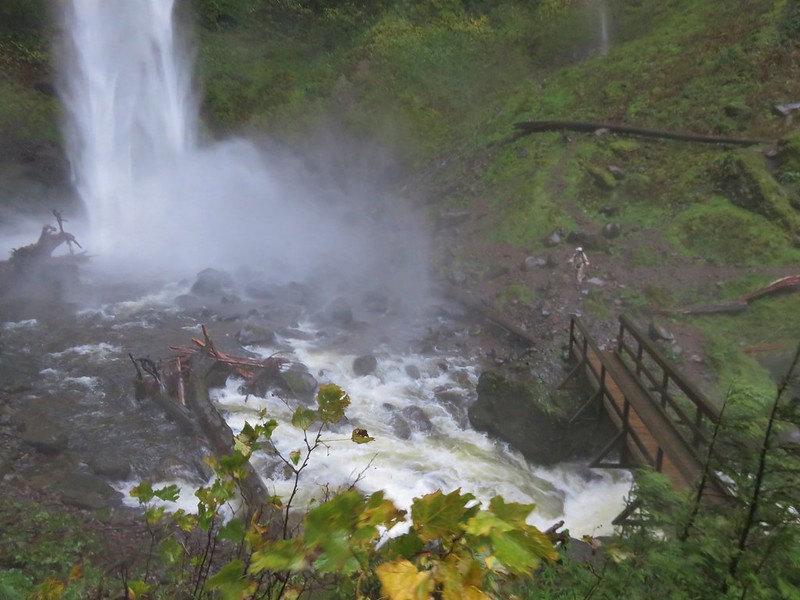 After crossing the bridge we turned right back around and headed back across. We were sufficiently wet at that point and ready to begin the day’s big climb. When we got back to the fork in the trail near the trailhead we stayed on the Gorge Trail following the pointer for Nesmith Point. The Gorge Trail led uphill at a reasonable grade crossing an unnamed creek that was also swollen with rain water. 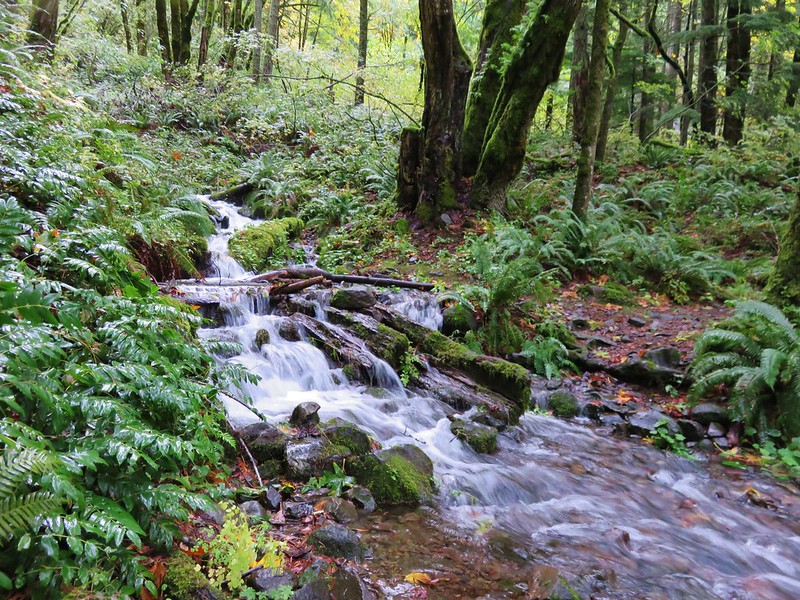 Our maps showed the Nesmith Trail splitting off from the Gorge Trail after approximately .9 miles at a swtichback along another creek. We passed the switchback without realizing it because there was no sign of the Gorge Trail continuing from it across the creek. It turns out a 2.4 mile section of that trail is missing from the creek to Ainsworth Campground. We were now climbing in earnest and wondering when the .9 mile section was going to end. I eventually took a peak at the Garmin which is when I discovered that we had already passed the switchback where we should have split from the Gorge Trail. Heather was quite relieved when I informed her that we were now well into the 2.4 mile climb from the phantom trail split to a ridge top saddle. This portion of the Nesmith Trail was forced to climb steeply due to the narrowness of the valley we were heading up. Several sets of switchbacks alternated sides of the valley allowing views from different angles. 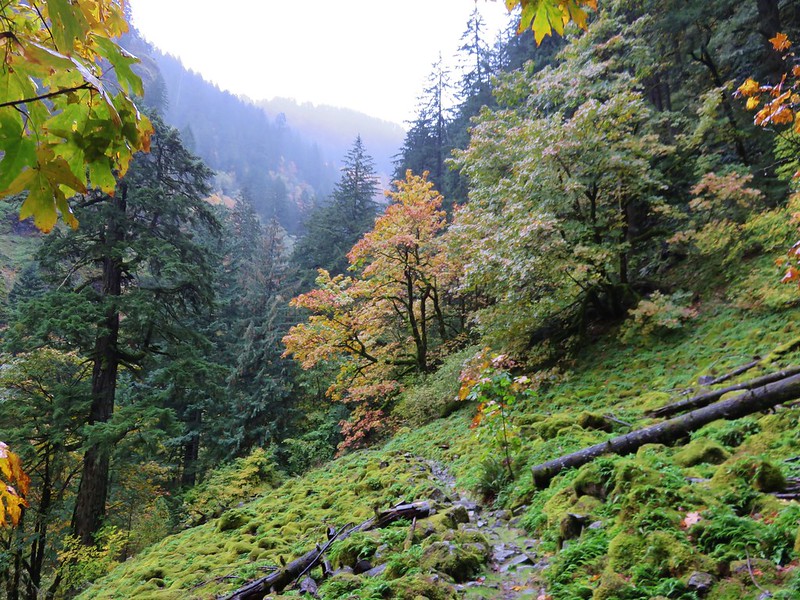 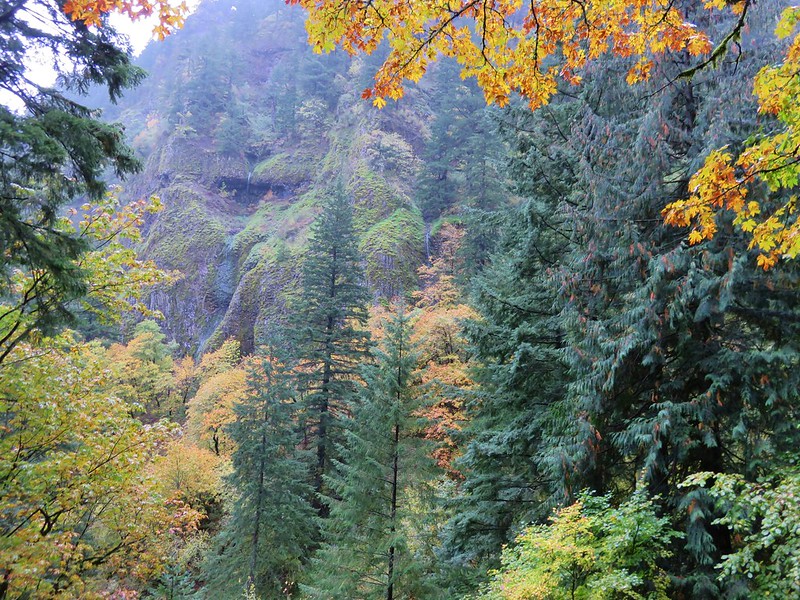 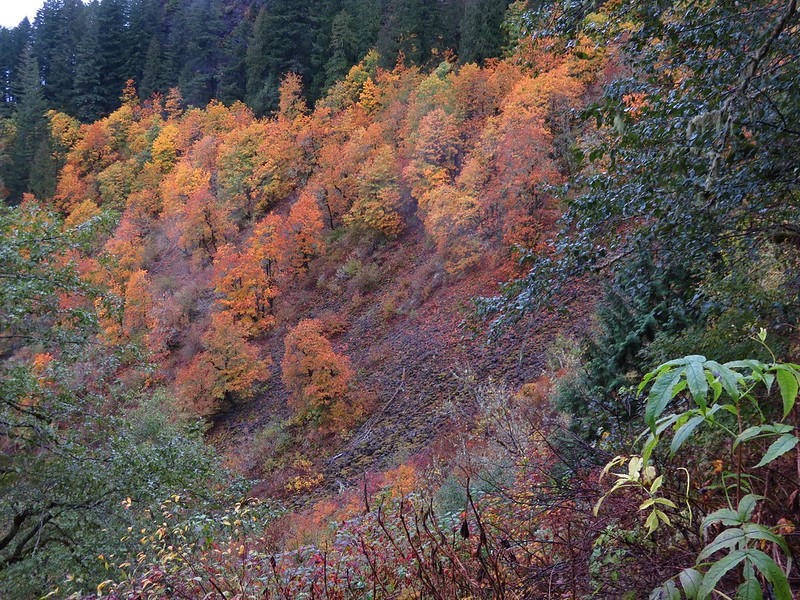 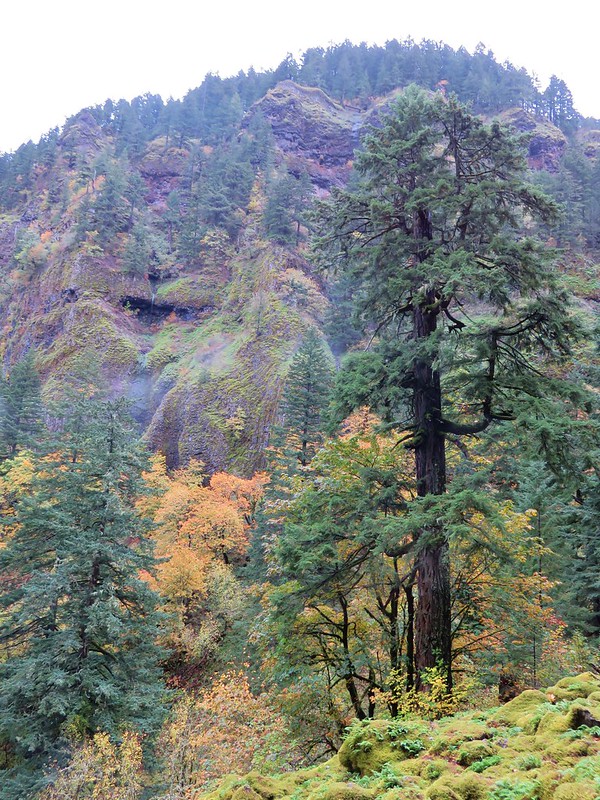 Occasional views across the Columbia River included Beacon Rock along with Hamilton and Table Mountains. 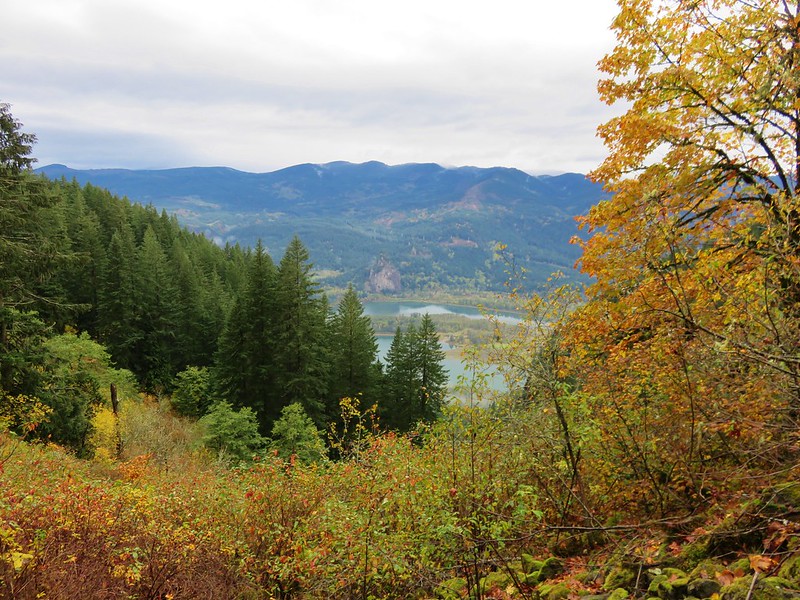 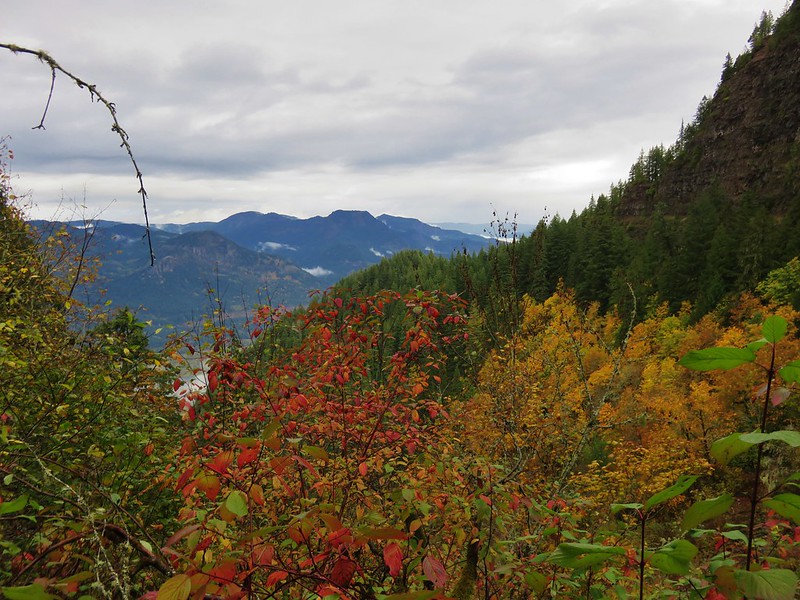 The trail showed little sign of damage from the storms as we slowly made our way up to the saddle where a trail sign awaiting announcing it was only 1.6 more miles to Nesmith Point. 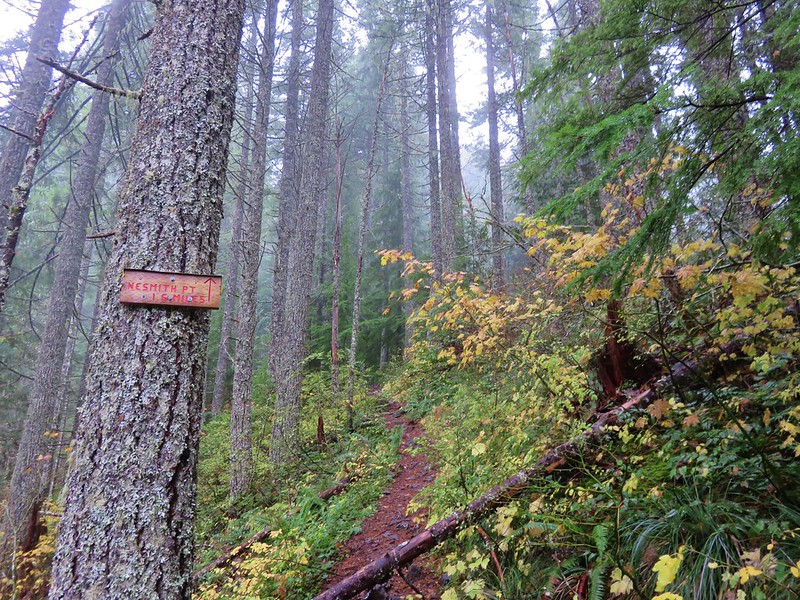 At the saddle we could see across the McCord Creek valley to the next ridge but not beyond. 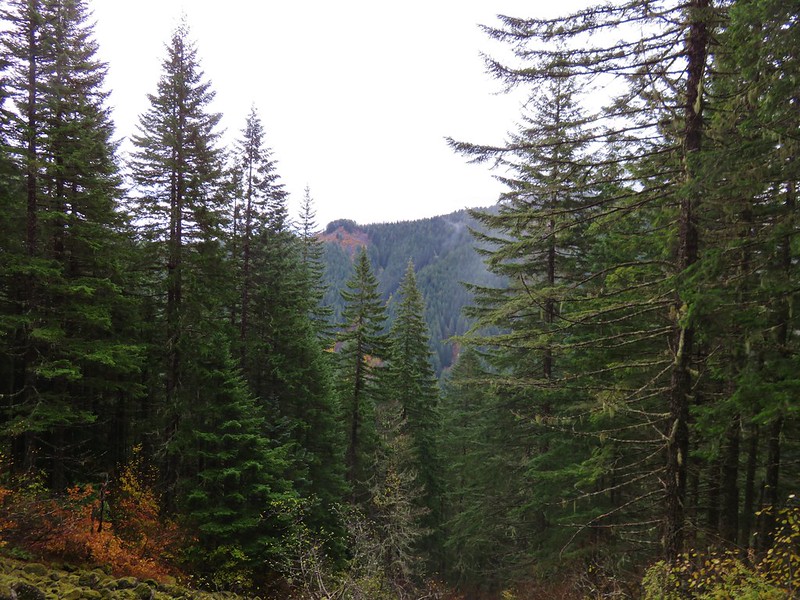 From the saddle the trail wrapped around the SE side of a ridge extending to the NE from Nesmith Point. One of the rewards of climbing up out of the Gorge is getting to experience the change in the forests. At the lower elevations along the Gorge the forest typically looks something like this: 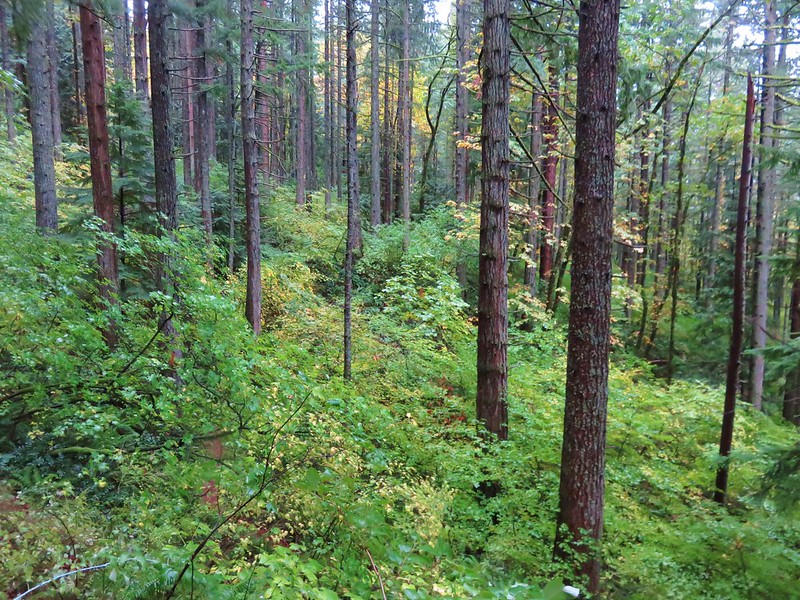 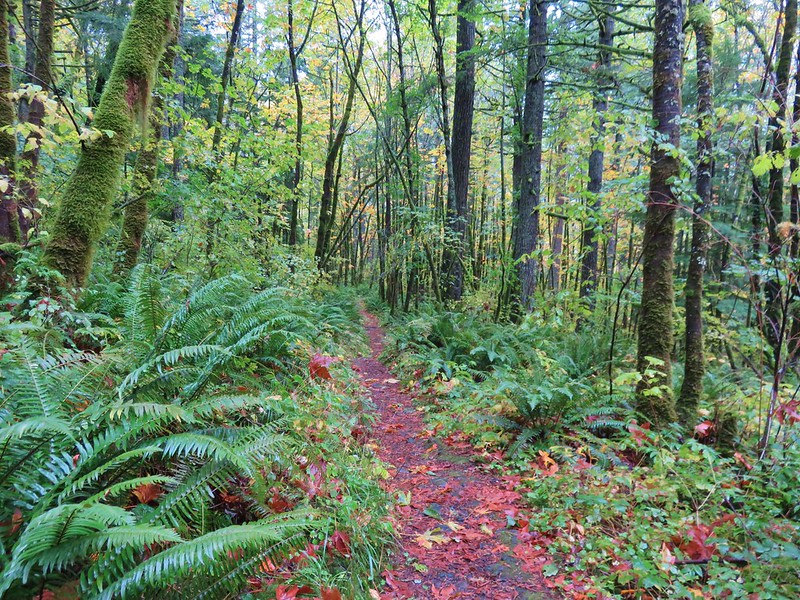 On top of the basalt plateau the forest is noticeably different. 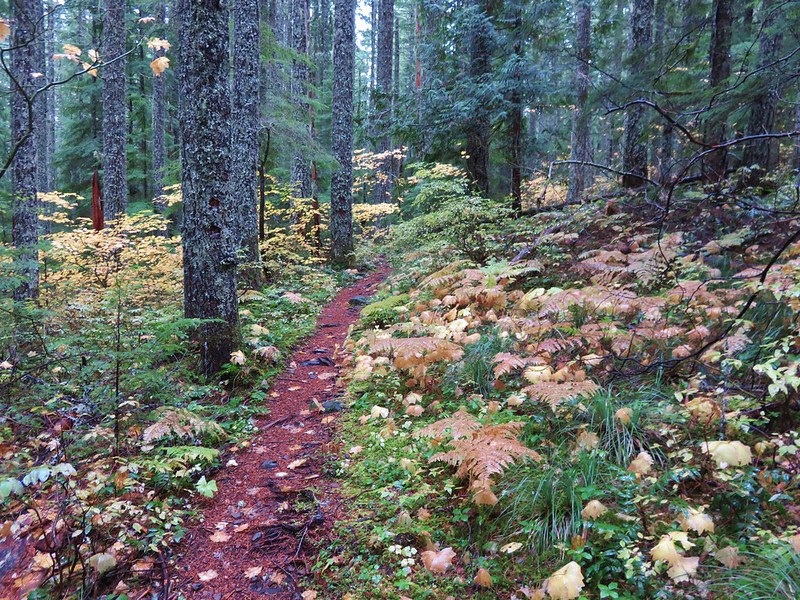 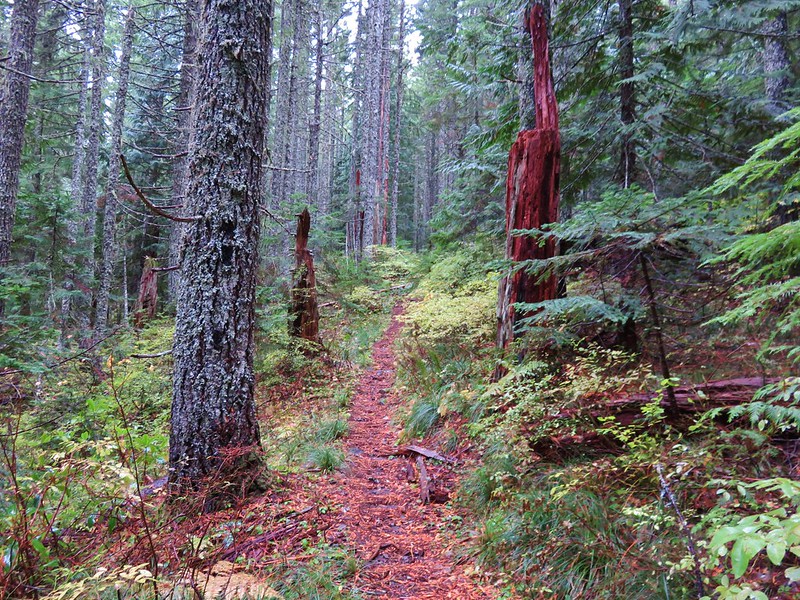 The stark contrast makes it hard to believe that these ecosystems are so close to one another as they feel like different worlds. We were now climbing at a much more reasonable grade. Approximately 1 1/4 mile from the saddle the trail curved sharply to the right at a pointer for Nesmith Point. 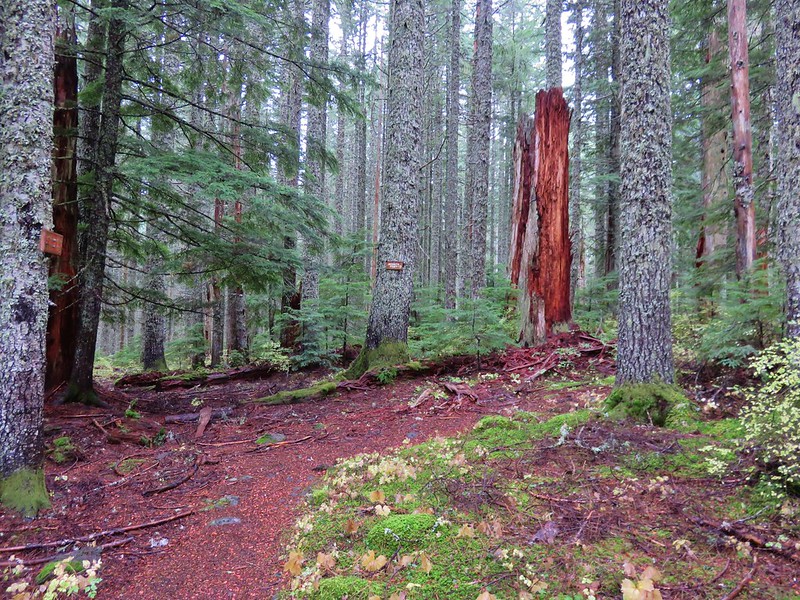 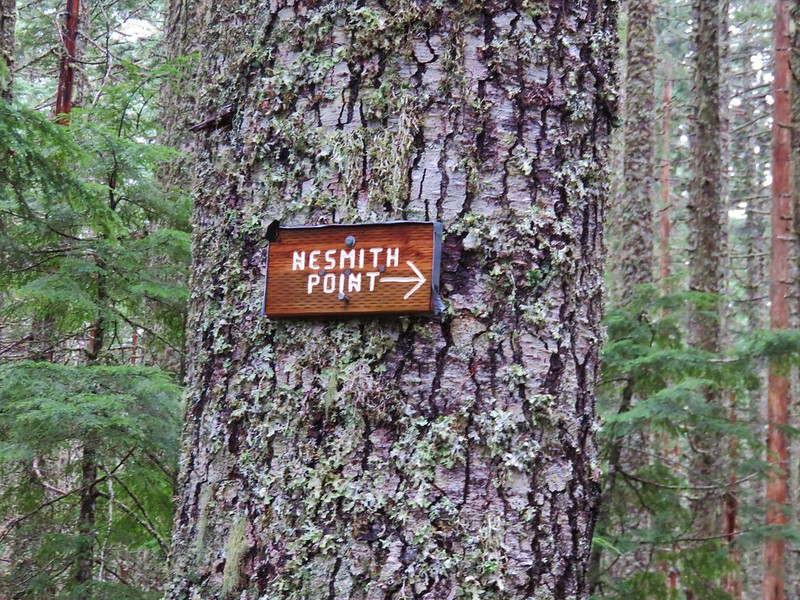 Less than a quarter mile from the sharp turn we arrived at the now closed road that led to the former lookout tower on Nesmith Point. 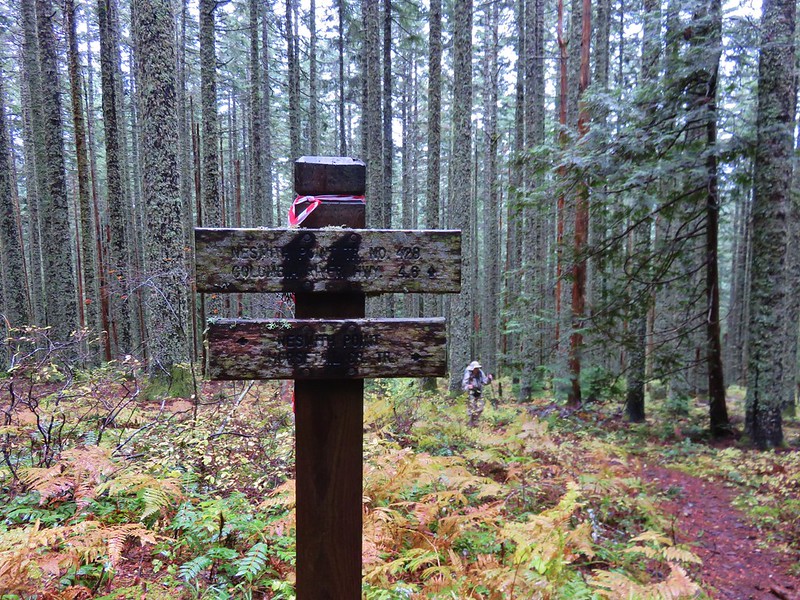 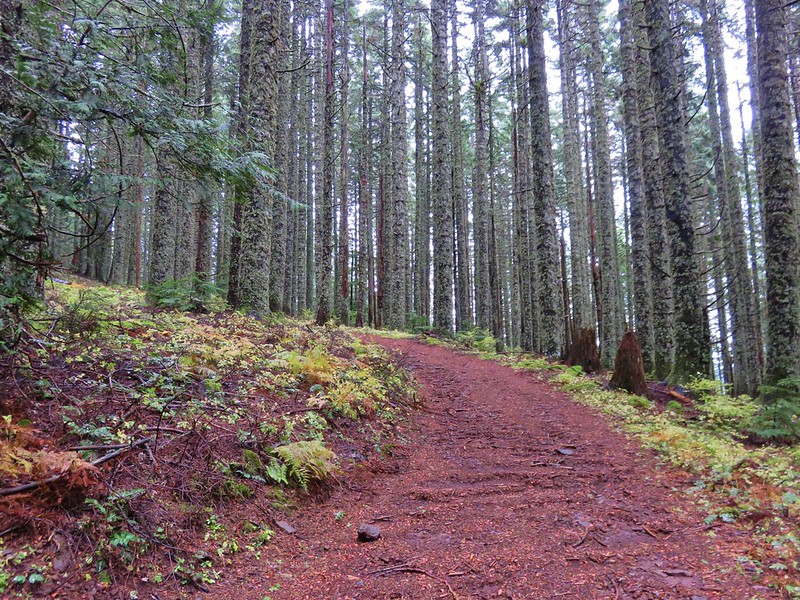 We followed the old road uphill .3 miles to the now overgrown site of the old fire lookout. 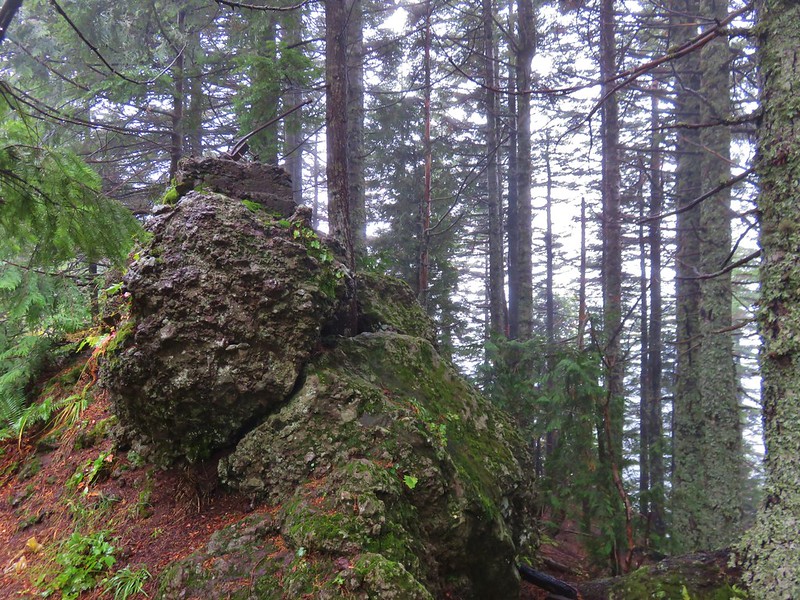 Just before reaching the lookout site there was a break in the trees that offered a bit of a view across the Columbia River Gorge. 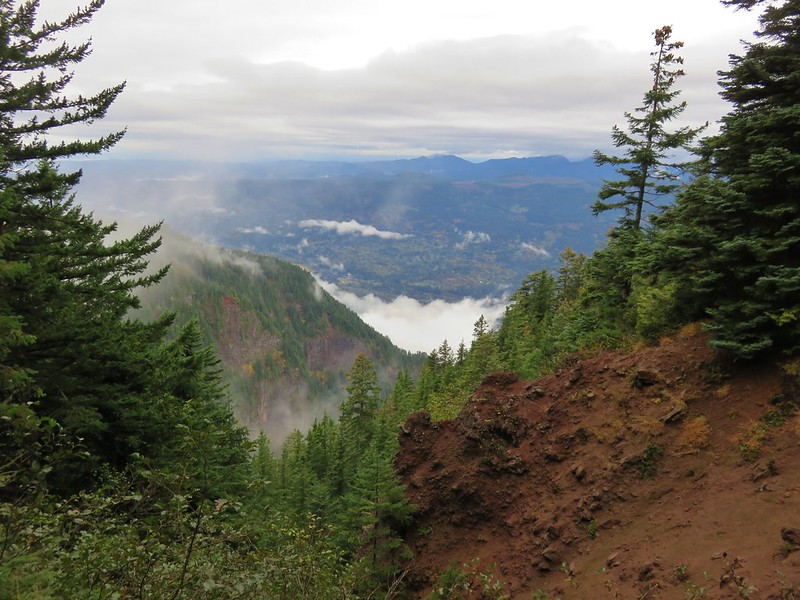 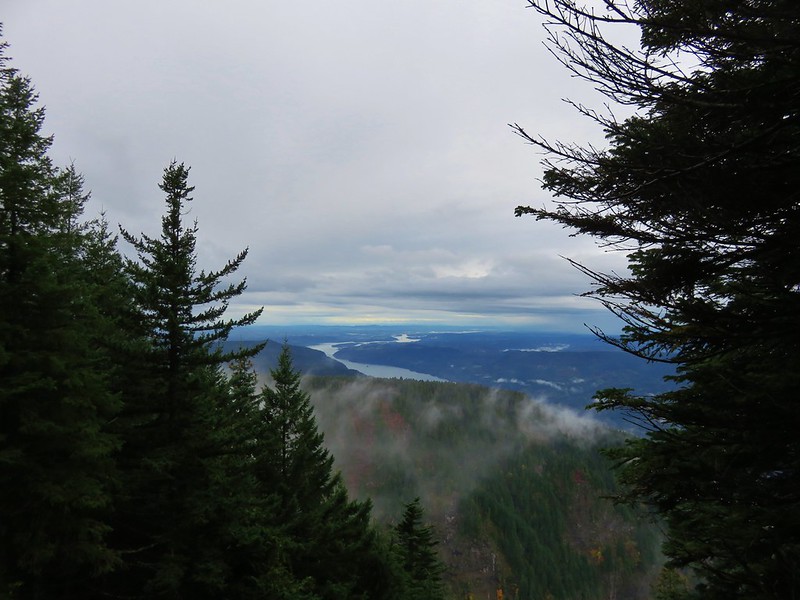 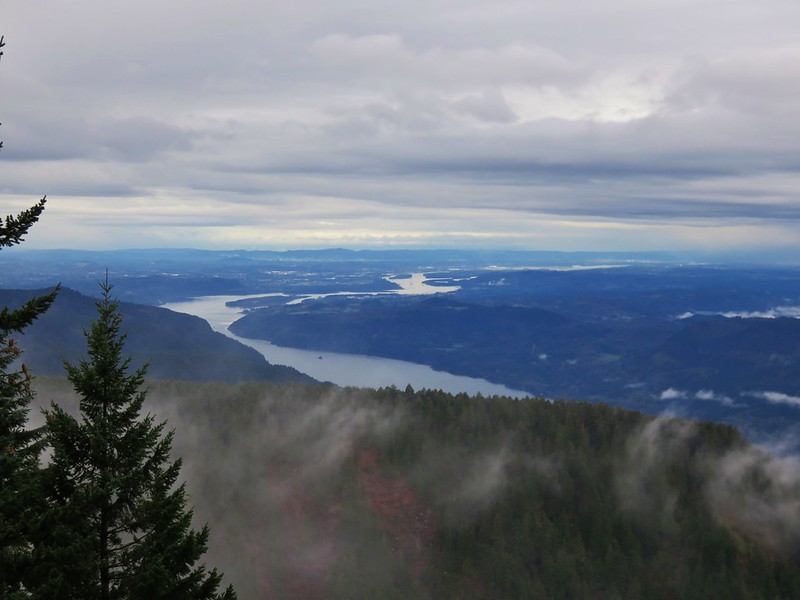 To get a better view (and on a clear day a view of Mt. St. Helens and Mt. Adams) we continued on the trail past the old lookout site. This path led downhill before splitting. We took the right had fork to begin with which led us down to a cliff top viewpoint that was a little sketchy on such a damp day. The cloudy conditions weren’t allowing for any better view than what we’d seen at the viewpoint before the lookout site either, so we backtracked to the split and took the left hand fork. This fork led to a viewpoint across from where we had just been. Again the clouds effectively canceled the views but it was fun to watch them as they swirled below. 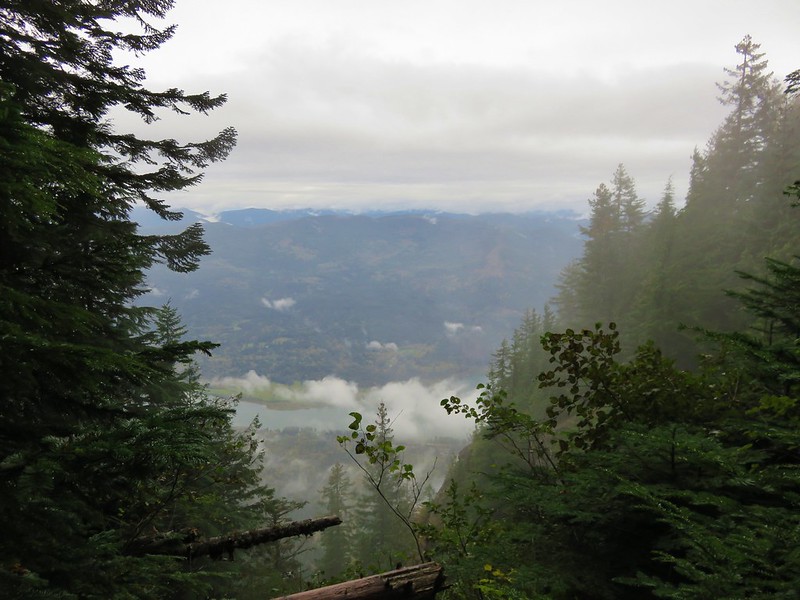 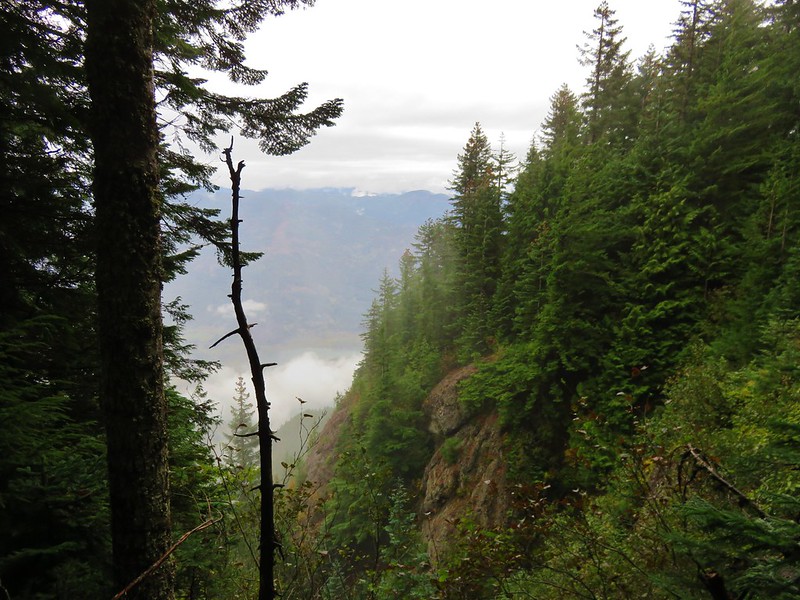 We decided to take a break there and eat some food. It was very peaceful being that far above the noise of the cars on I-84 and the trains chugging through the gorge. I found myself thinking I could spend quite a while just watching everything pass by below. Just a couple of minutes later our hands were becoming numb and we were ready to get moving again. Between the damp conditions and the breeze on the plateau our core temperatures had fallen and now we were cold. So much for the peaceful bliss 🙂 We retraced our steps making our way back downhill past several hikers and a number of beetles. 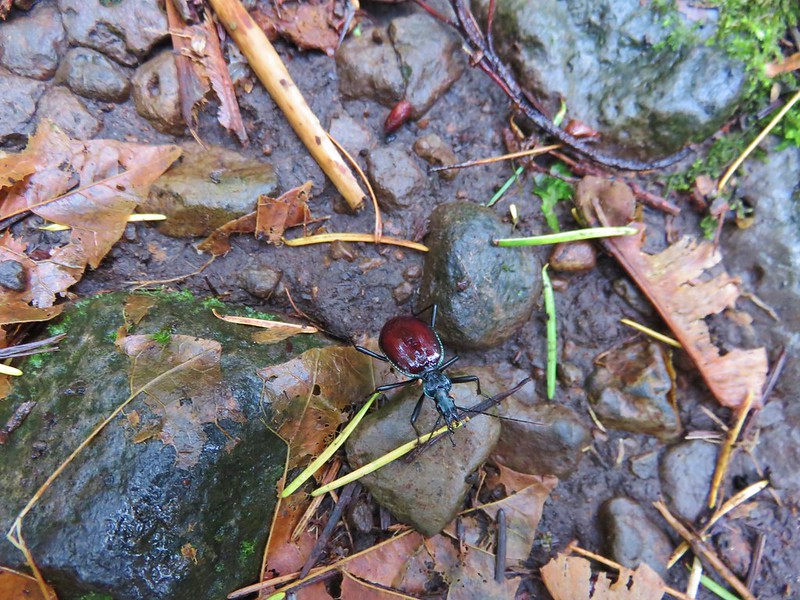 At the switchback where we had expected the Gorge Trail to split off we looked for any signs of the other trail. The only thing we could see was a wooden post surrounded by rocks at the switchback but there was nothing on the other side of the creek to even hint at where the Gorge Trail had been. We felt better about having missed that spot now that we knew there was really nothing there that we should have seen. We returned to the now full trailhead having finished our 56th hike of the year equaling our total from last year. Only 4 hikes remained on our 2016 schedule and we wondered what would be in store for us on those. Happy Trails!

It’s interesting to see old official signs, new official signs, and new homemade signs now in this area. The junction & footbridge to the Gorge (400) trail that you couldn’t find washed-out in the winter of 1995-96. Some “lost trail” hikers have found the remnants of the 400 on the other side of the creek and been able to follow it to Dodson. Love the beetle – wish I was better at IDing the smaller wildlife.

We often find ourselves wishing we had a geologist, botanist, biologist and/or entomologist along on our hikes. There are always so many questions raised by the sights along the trails.

[…] numerous trails, some paved and some not, as well as an off leash dog area. It reminded us a bit of Minto-Brown Island Park in Salem except there were hills instead of a […]

[…] before passing a brushy unnamed lake. Bonneville Dam on the Columbia River. Nesmith Point (post) is the rounded high point to the right on the Oregon […]