Well it seems that summer has arrived early in the Pacific NW. We’ve enjoyed some unusually warm/dry weather which has me making some adjustments to our hiking plans. We’re hoping that some of the trails will be snow free earlier this year than the previous couple. On the flip side we’re hoping that the weather doesn’t translate to an early or particularly bad fire season, but I digress. On to the trip report for the South Breitenbush Gorge trail.

For the second hike in a row we headed to the Detroit, OR recreation area, and for the 2nd week in a row we were greeted with great weather. This time we would be hiking the first 3.6 miles of the South Breitenbush Gorge trail. The trail itself continues on to Jefferson Park (one of my favorite places) where it meets the Pacific Crest Trail. The trail sets off near the South Breitenbush River and quickly crosses it on a series of footbridges. Our sources (William Sullivan’s “100 Hikes in the Central Oregon Cascades” and Oregonhiking.com) had warned that these bridges are prone to floods which was apparent upon seeing them. They were a patchwork of styles and materials which only added to their charm. This one in particular was rather bouncy which Dominique found a bit unsettling. 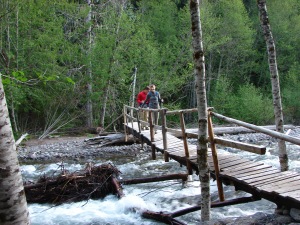 Once across the river the trail followed along at a distance through the forest. Never out of earshot but seldom in view the South Breitenbush flowed along on it’s way to Detroit Lake. In addition to the sound of the river there was almost always a bird singing, and though we didn’t see many we knew there was always one close by.

Like last week we spotted a flower that we had not previously seen on a hike. Last time it was Fairy Slippers (of which we saw many on this hike) and this time it was Fairy Bells which are twin small white flowers. In addition there were many other flowers in bloom including Wood Violets, Sourgrass, Red-Flowering Currant, Salmon Berries, Strawberries, Trillium, Vanilla Leaf, Oregon Grape, and Solomonseal. Rhododendron and Beargrass were present but had yet to bloom; although, there was a very colorful bud showing on a single Rhody and I managed to spot a Beargrass bloom along the road on the way back to Detroit. Heather is sure I am obsessed with Beargrass. She might be right.

The trail was well maintained and never steep. Our goal was to reach Roaring Creek then continue another .5miles to a pullout on road 4685 that can be used as an alternate trail access. Roaring Creek was the scenic highlight. The water cascading over mossy rocks down through the forest was very pretty. 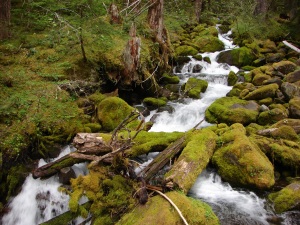 After spending some time taking in the view we continued on to our turnaround spot where we spotted a rough skinned newt and headed back to the car. This was our final planned hike with less than 1000 feet of elevation gain as we get ready to start climbing up to some better viewpoints. Something of which we are all looking forward to. Until next time – Happy Trails.