Well we survived the marathon, and even though it didn’t go as well as we’d hoped, we all finished. It was a beautiful day but that meant temperatures that were 15 to 20 degrees warmer than what we were used to and we all struggled to stay hydrated. While we recover from the race and prepare to put our hiking season into full swing I thought it might be a good time to look back at how we got started hiking.

Heather and I have now set out with the intention of hiking just over 100 times. It has become one of our favorite pastimes and we have learned a lot along the way, but it took us a long time to get here. In fact you have to go back almost 20 years to find that first hike. Heather and I were only dating at the time and I was taking a backpacking class in college. One of the assignments was to go on a hike. I don’t recall much from that class, but that one assignment planted a seed that would eventually grow into our love of hiking.

For the assignment I decided on the Fall Creek trail to Green Lakes in the Three Sisters Wilderness and Heather agreed to join me. Our knowledge of the trail consisted of the location of the trail head when Heather and I set out one day in mid-spring. If we had done even a little research we would have discovered that even though the trail heads in that area might be snow free in May the trails themselves are usually still buried under snow. We didn’t get far before we were forced to turn around and abandon the hike, but in that short amount of time a seed was planted.

We had the trail to ourselves that day (apparently everyone else had done their research) and the solitude of the path through the forest and along the creek was wonderful. We were having a great time when we began running into the first patches of snow. We hiked on for a bit but the snow was too deep and we realized we would have to turn around. We had both done some camping growing up but had never been anywhere as beautiful and peaceful and yet as wild as this hike had taken us. We were disappointed at having to leave the hike incomplete and agreed that we would return someday and make it to the Green Lakes. The seed was planted.

Life had other plans and the memory of that hike was pushed aside and buried, and the seed lay dormant. We started jobs and a family and became sedentary in our lifestyles. Eventually we started getting ourselves back into shape though. One of the ways in which we did that was to take walks whenever we had the chance. We walked in our neighborhood, in town, and even at Dominique’s sporting events. We took opportunities at other times too. We walked along the Deschutes River while staying in Bend and we walked around Suttle Lake while staying in a cabin there on summer. We weren’t consciously thinking about going on hikes, but looking back I can see that those walks woke up that sleeping seed and it began to grow under the surface.

It finally broke through during a company picnic at Silver Falls State park. We had decided to take a walk down to some of the falls when the picnic began wrapping up. It was a very hot day and we didn’t think to take any water with us. We made the classic mistake of wandering without considering the return trip. When we started to get thirsty we realized there was no way we were going to make the full 7 mile loop and took a cutoff trail back to the visitor center. Between the heat and the climb out of the canyon we thought we might not make it back. There was something about that experience though, perhaps not being able to complete the entire trail, that reminded us of the Fall Creek hike so many years before. Once again we began thinking that hiking might be something that we would enjoy doing.

It took us several more years to develop a hiking “routine” and to begin to figure out what worked for us. A mere 6 hikes from 2006 to 2009 was all we managed. Despite the small number the experiences on those hikes were enough to allow the seed to continue to grow and eventually mature. Each time we made it out we fell in love with the trails a little more. There was something about the experience of every hike that was satisfying and at the same time left us longing for more.

There are a number of aspects of hiking that combine to create that experience. The trail is a classroom, an art gallery, a gym, and an escape all at once. We find it benefits our minds, bodies, and souls. Every trail offers some combination of these aspects to varying degrees. The end result is that after a day of hiking we have taken on a physical challenge, experienced new sights, made new observations, reduced our stress levels, and most importantly been reminded of our place in God’s creation.

We have learned things about the wildlife and vegetation we see. We’ve learned about the history of different areas and why they appear the way they do. We have also learned how to use a map and compass to navigate, and we continue to learn what we are physically and mentally capable of.

Always make sure you have enough water and food 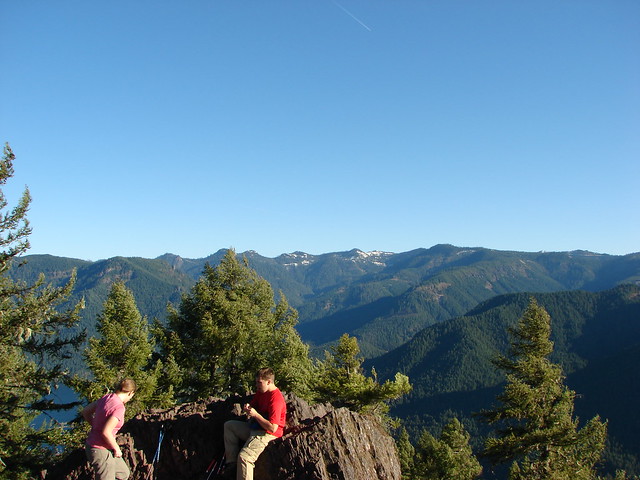 Mosquitoes will cause a person to lose all sense of fashion 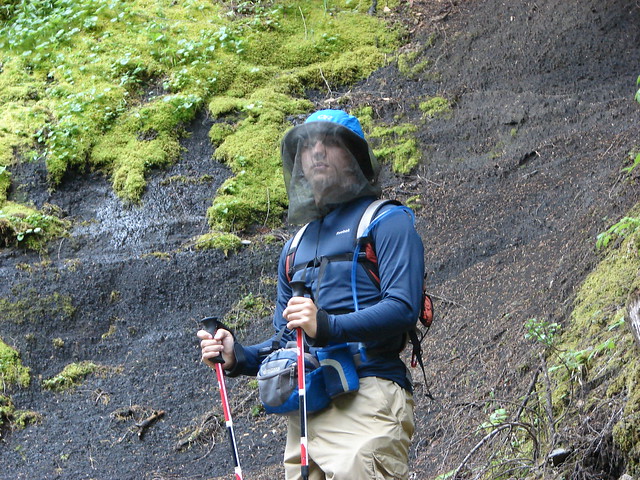 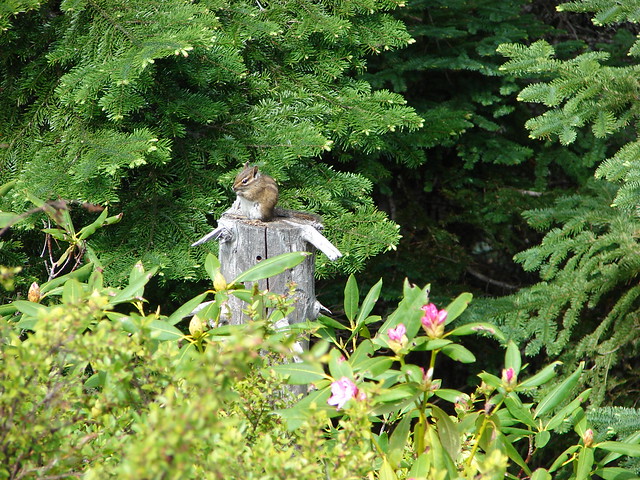 Ponchos have a mean streak 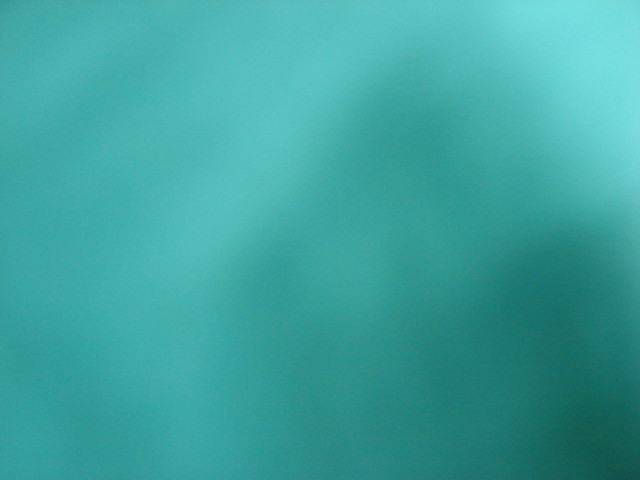 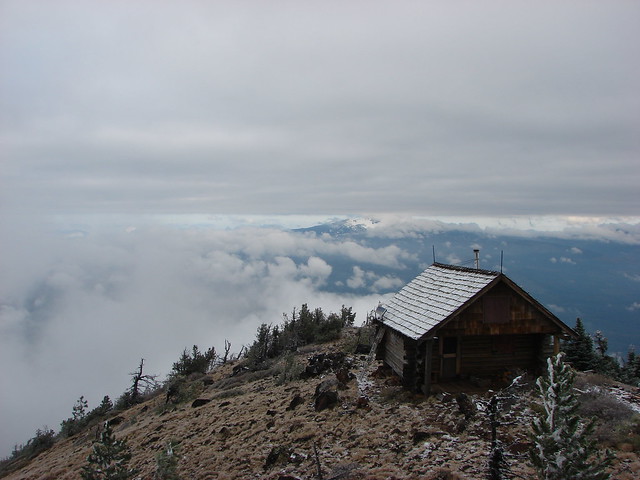 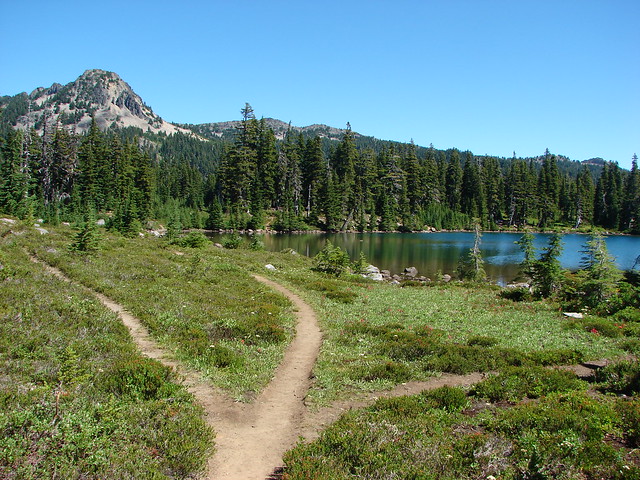 Sometimes it pays to take the side path 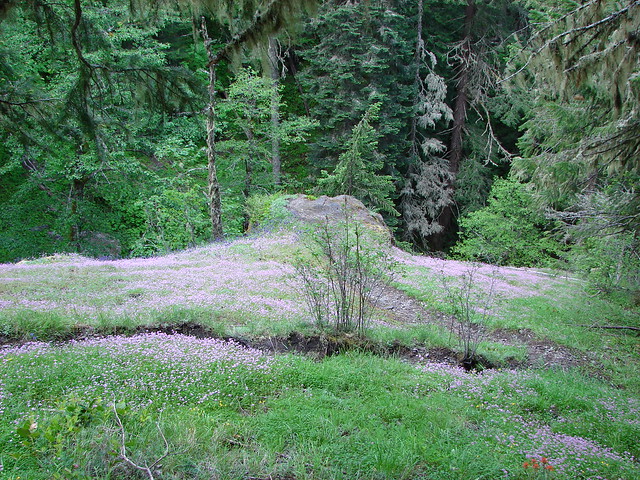 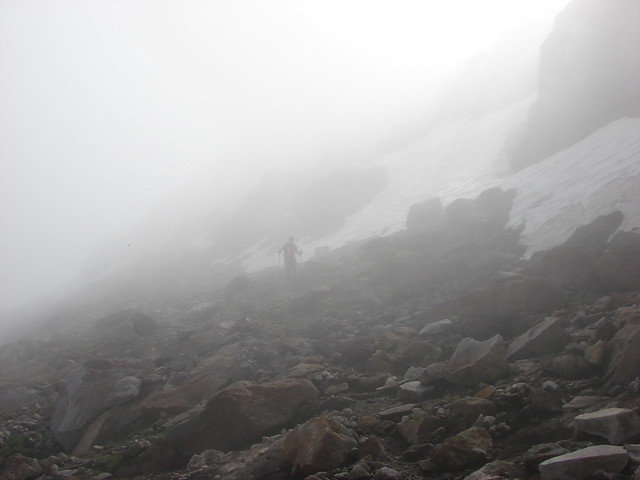 The number one lesson though is that there is no such thing as a bad hike.

When we headed out for my assignment 20 years ago neither Heather nor I had any idea what we were getting ourselves into. Today we can look back at that assignment and see that the seed planted that day is what led to our hiking pastime. As for our return to Green Lakes, it hasn’t happened yet. Just as it was the previous three years it is on our schedule. We have been derailed by snow, fire and lightning, but one of these days we will finish the hike that started it all. Happy Trails.

2 replies on “A Brief Look Back”

[…] with a hike since an ill prepared jaunt at Silver Falls State Park in 2006 gave us the hiking bug (post). I was extra excited for this outing having just received a replacement for our camera and looking […]