Since 2010 we have been closing out the year by taking our final hike along the coast or in the coastal mountain range, but this year that streak came to an end. Recent storms and heavy rains that damaged roads and left creeks and rivers swollen caused us to rethink our original plan to visit Fort Clatsop near Astoria Oregon. Instead we decided to put our fallback hike into play and visit Champoeg State Park.

Champoeg State Park is located along the Willamette River less than a ten minute drive from Interstate 5 at the Donald exit between Portland and Salem. The 622 acre park is at the site where Oregon’s first provisional government was formed by vote in 1843. On May 2nd of that year 100 men arrived at the Hudson’s Bay store to decide if they would form an American style government or stay aligned with Britain. The group consisted of Americans, Britons, and French-Canadians. The vote was initially tied 50/50, but two undecided French-Canadians eventually chose to vote with the Americans breaking the tie.

By 1860 Champoeg consisted of 200 buildings but in December of 1861 the river flooded when it rose by 55 feet and effectively wiped out the townsite. No lives were lost in the flood but it marked the end of the bustling town.

We parked in the Riverside Parking area located at the northeast end of the park planning on starting our hike on the .5 mile riverside loop. 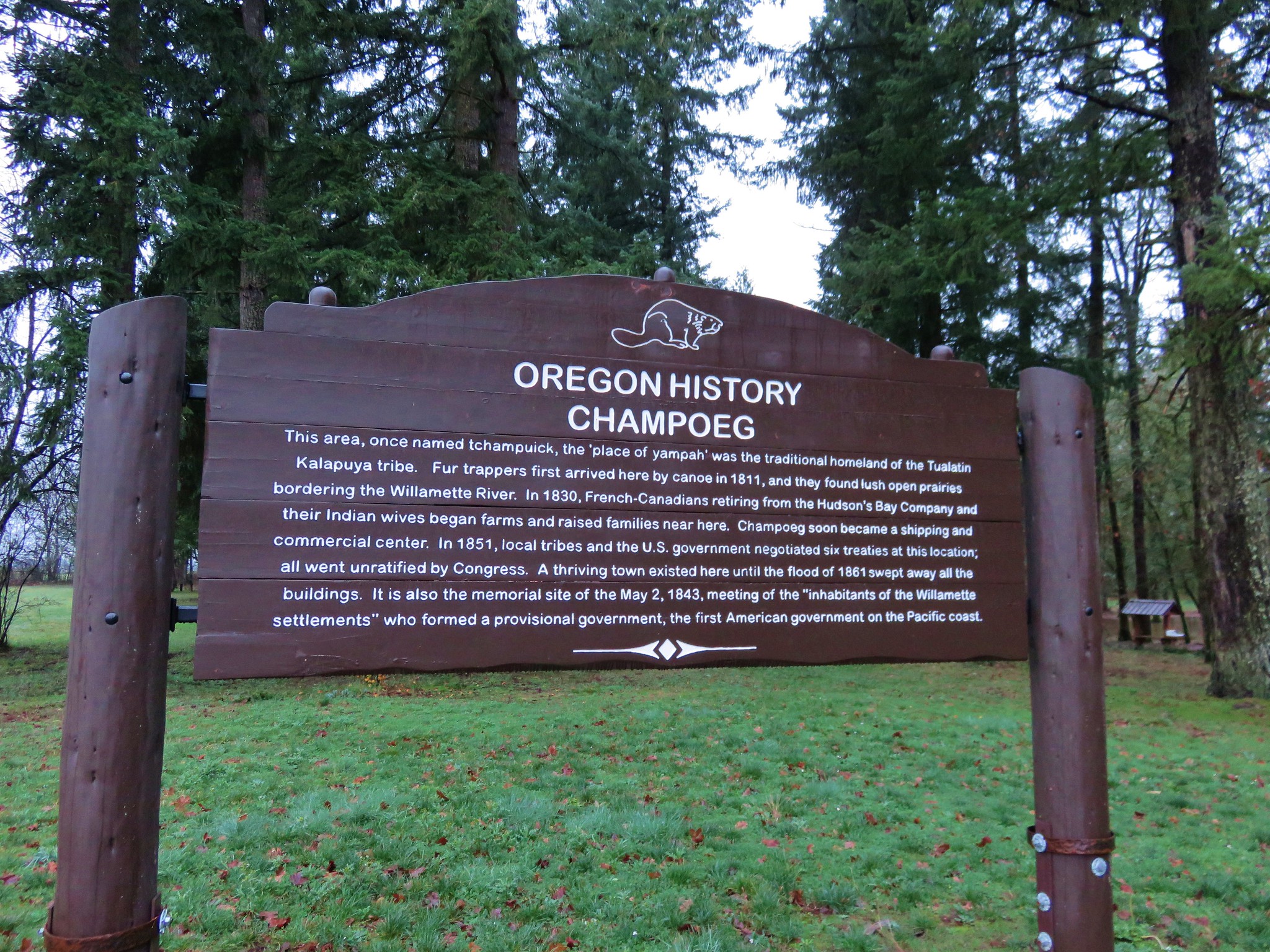 The recent rains had left the park a bit waterlogged and we found portions of the trail underwater. 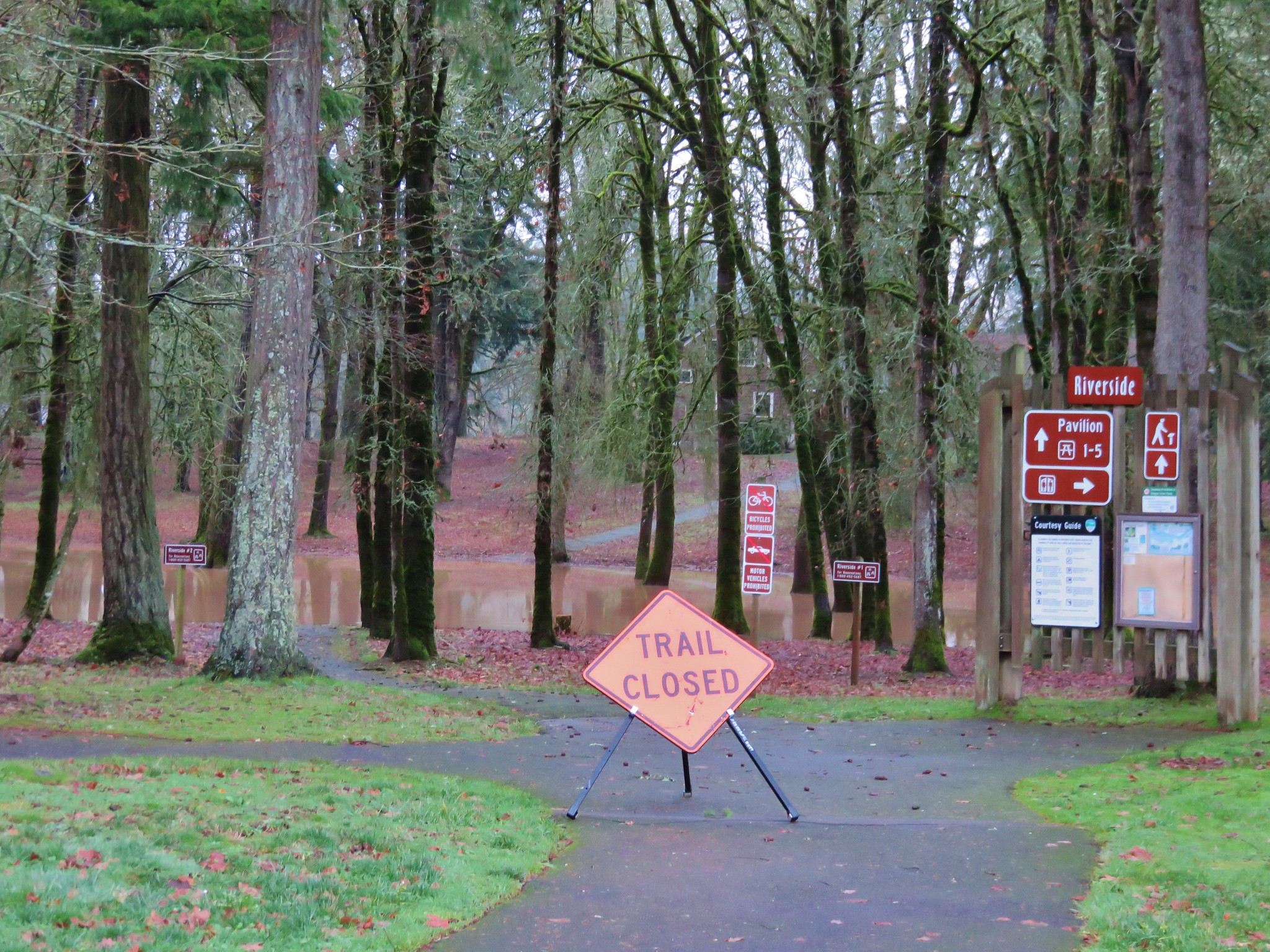 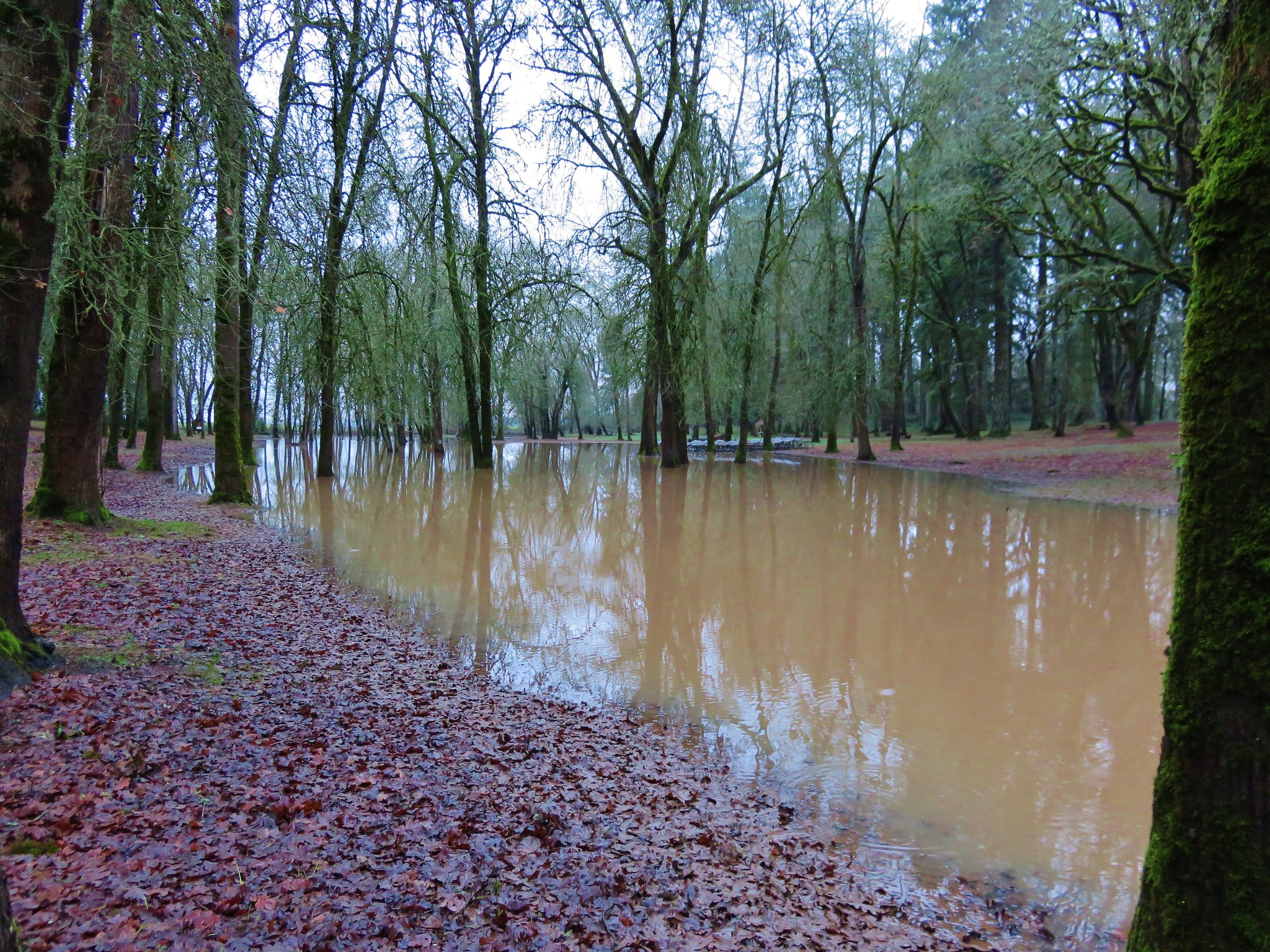 We made our way around this first obstacle and climbed a small hill to the Pioneer Memorial Building. 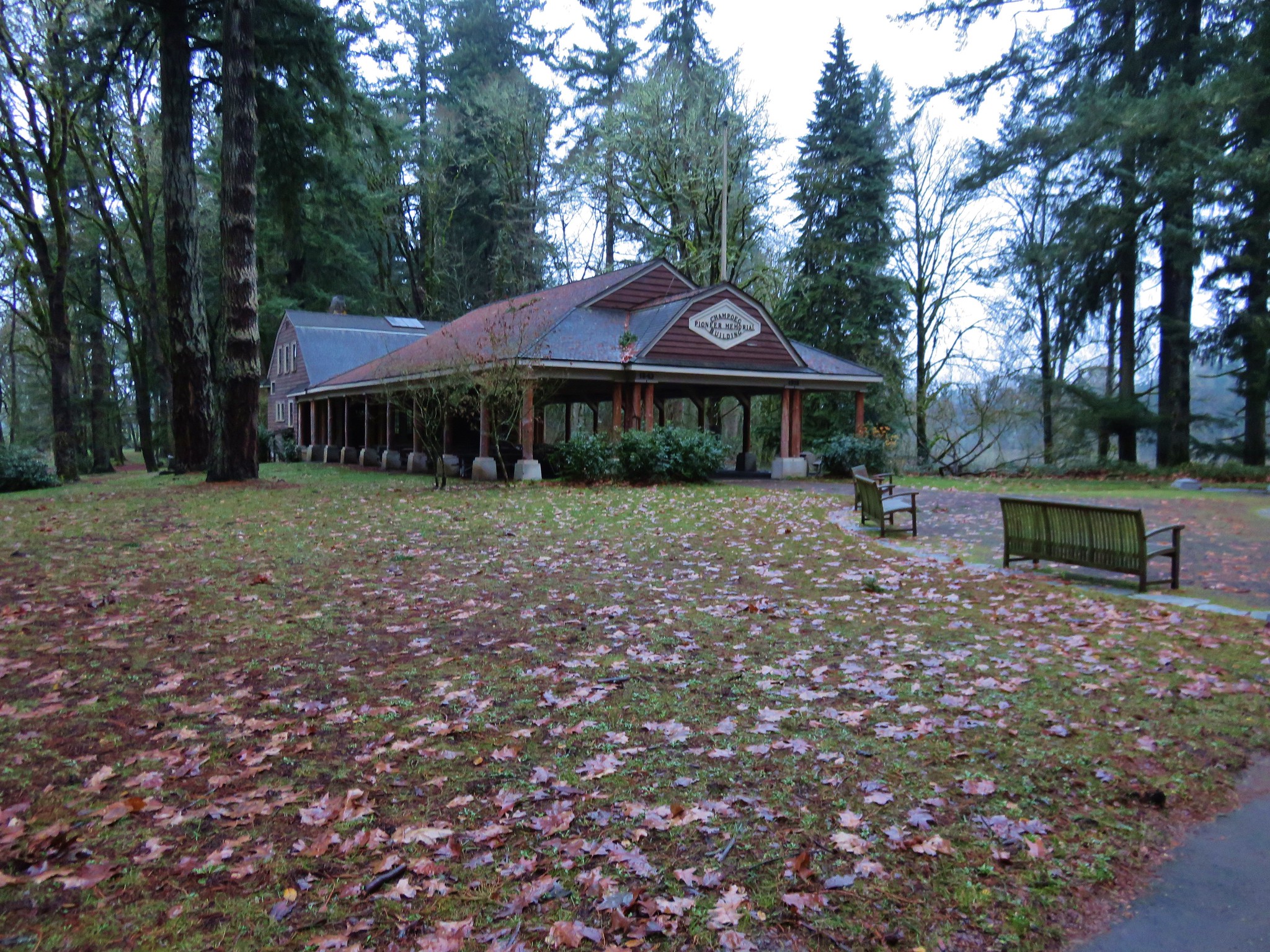 A 1901 memorial commemorating the 1843 vote sits in front of the building. 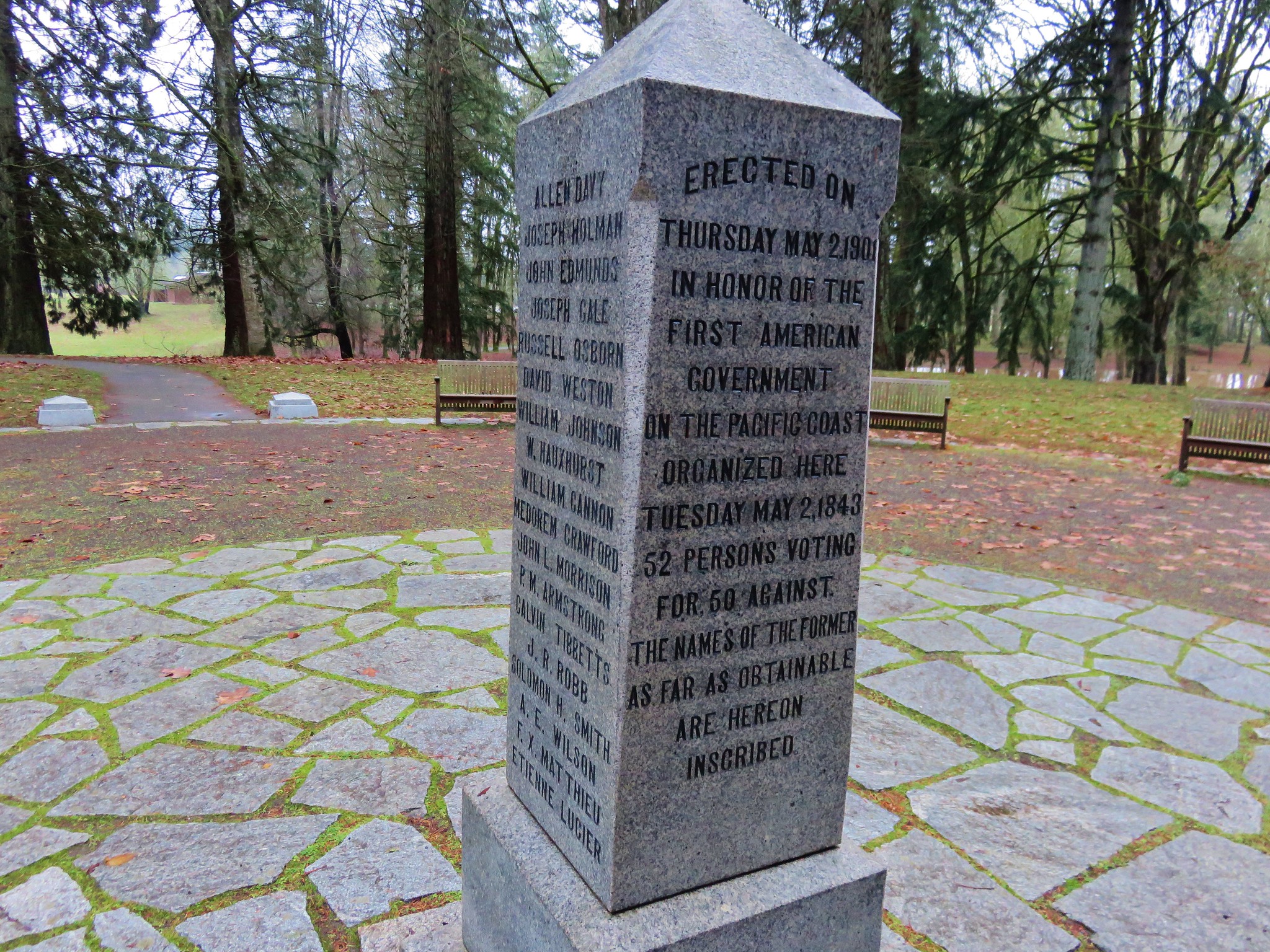 We set off on the Riverside Loop next to a muddy and swollen Willamette River. 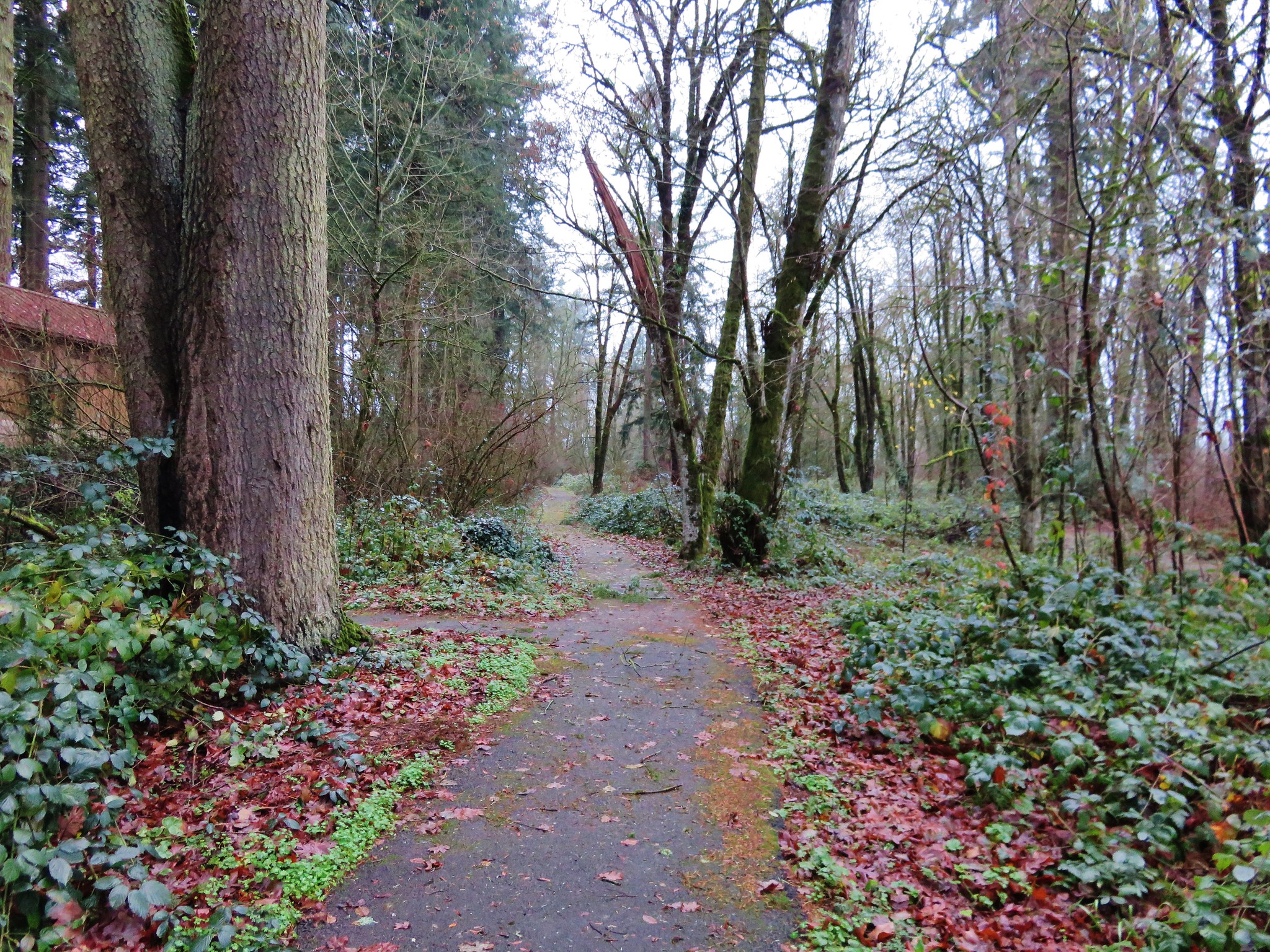 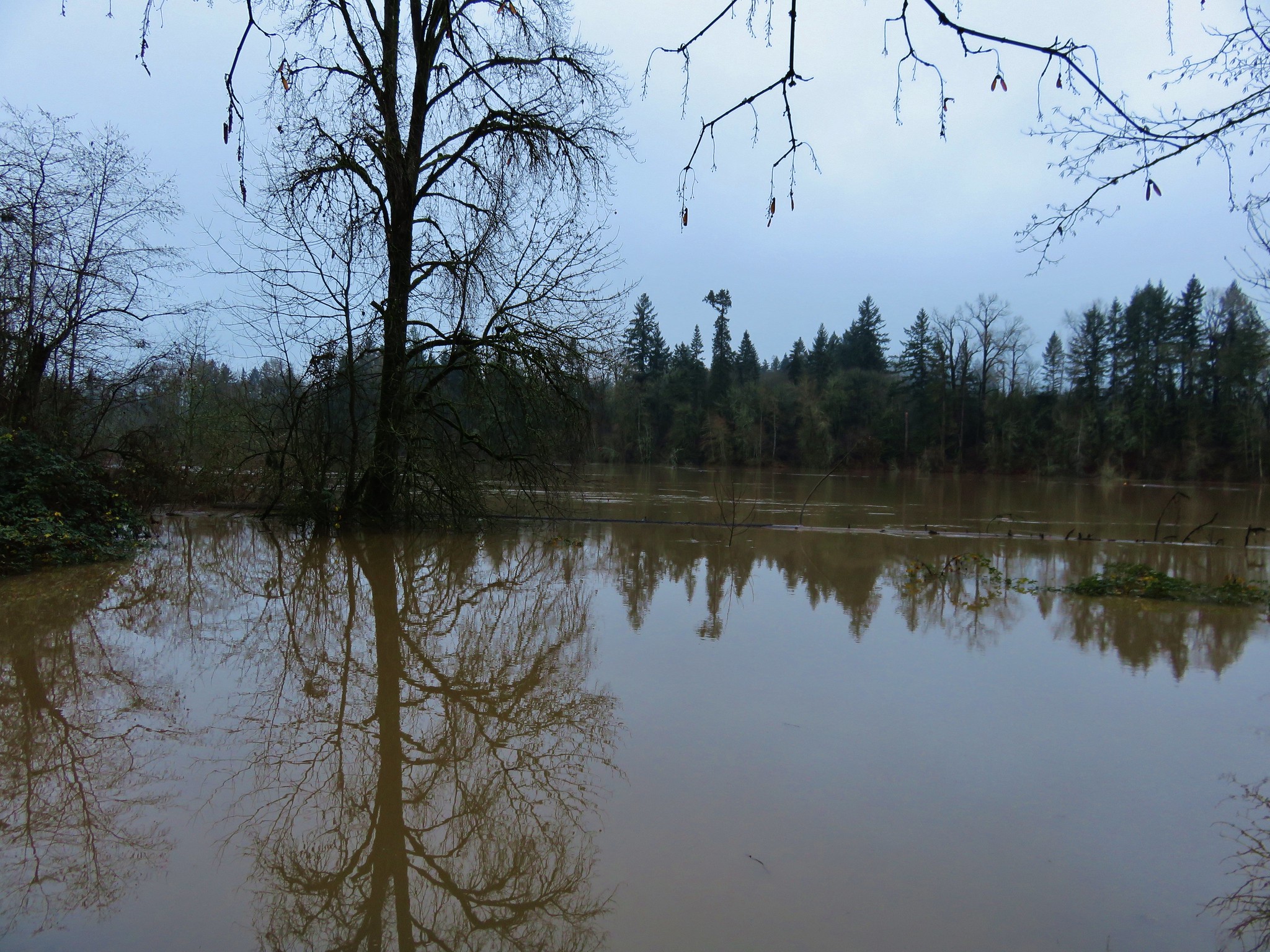 The loop wasn’t possible on this day due to several flood portions, but we walked the portions that were accessible. 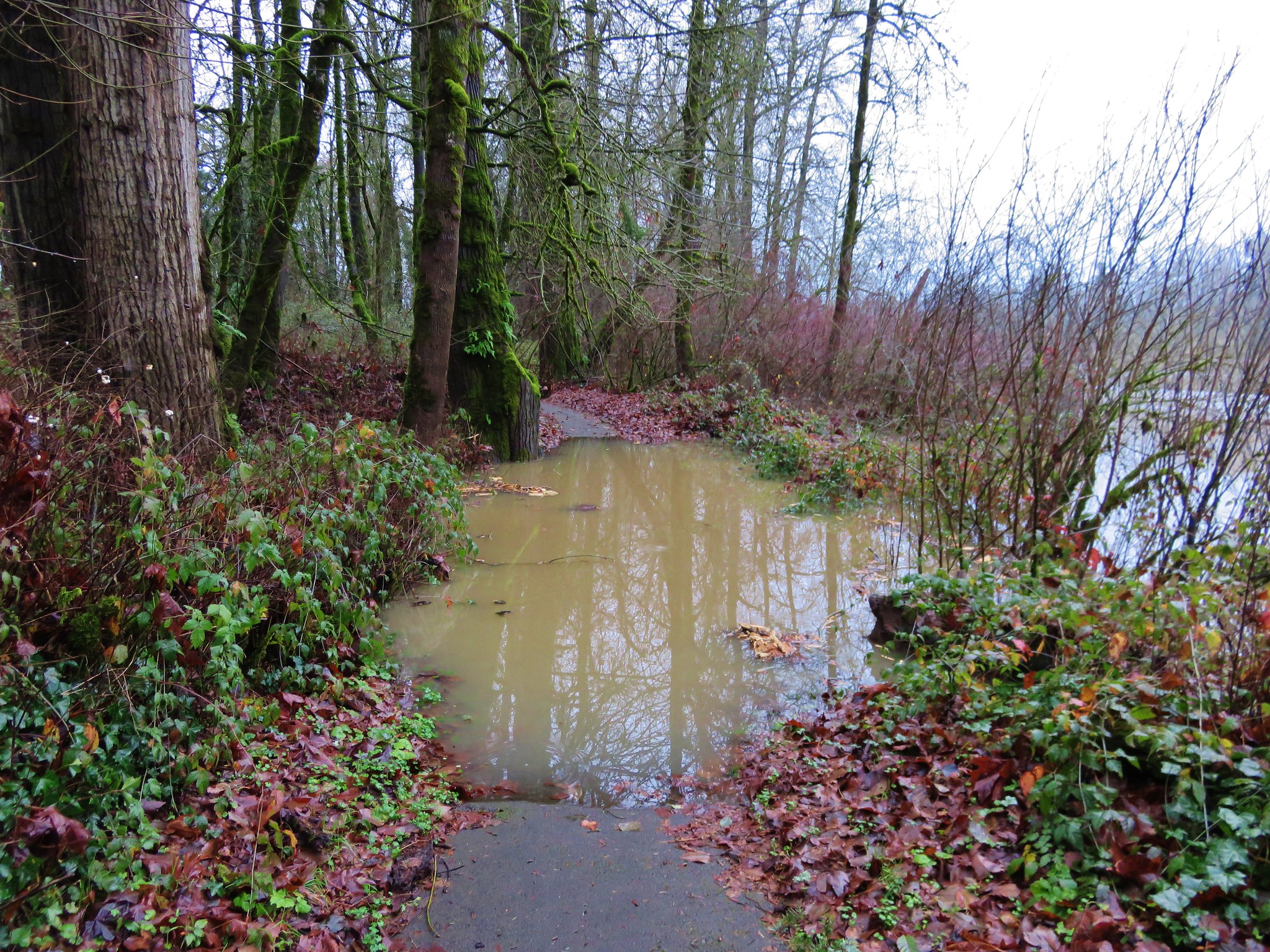 We returned to the memorial and headed west on the Townsite Trail, a 1.5 mile barkdust path that led to the Park’s campground. 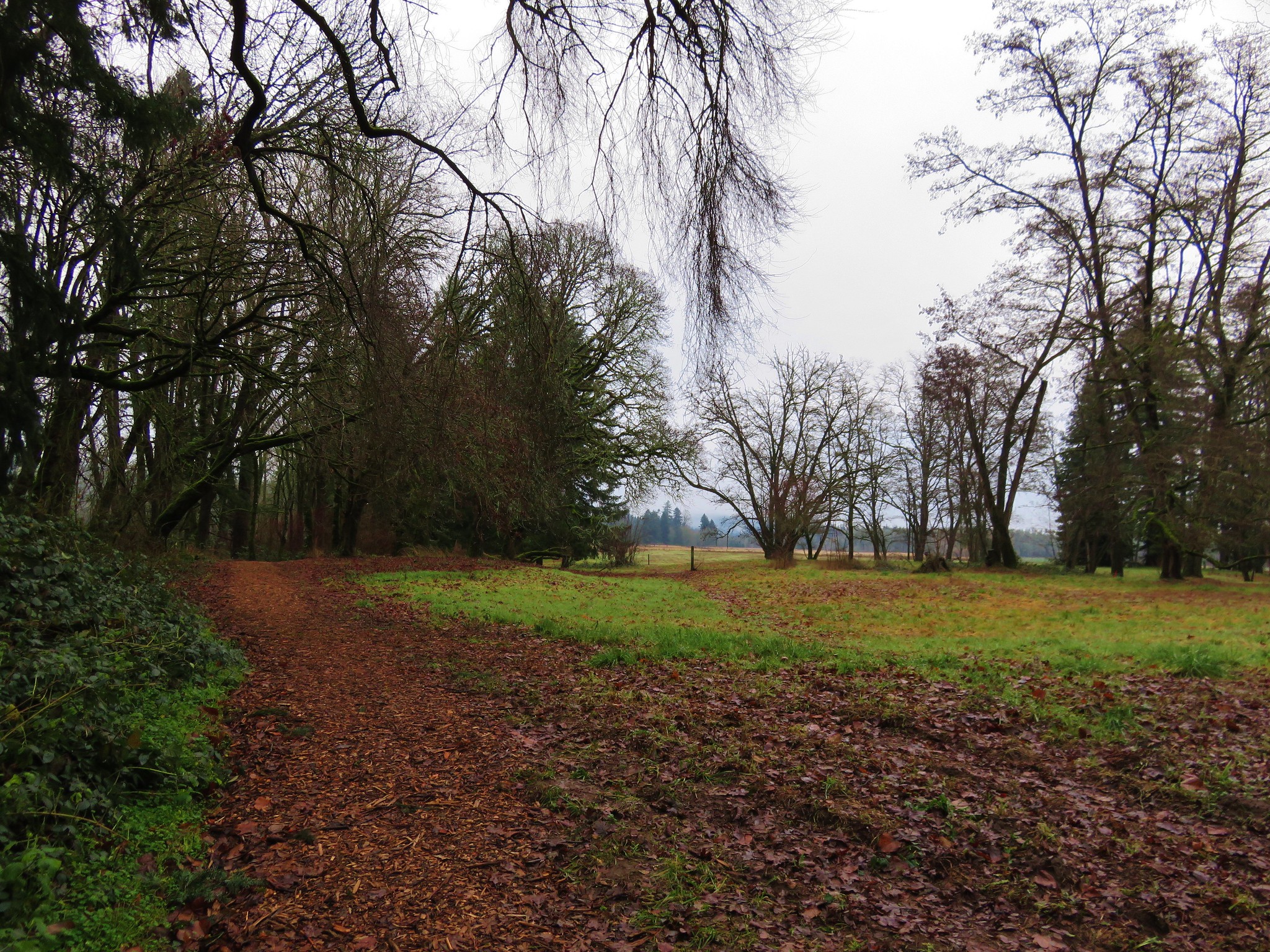 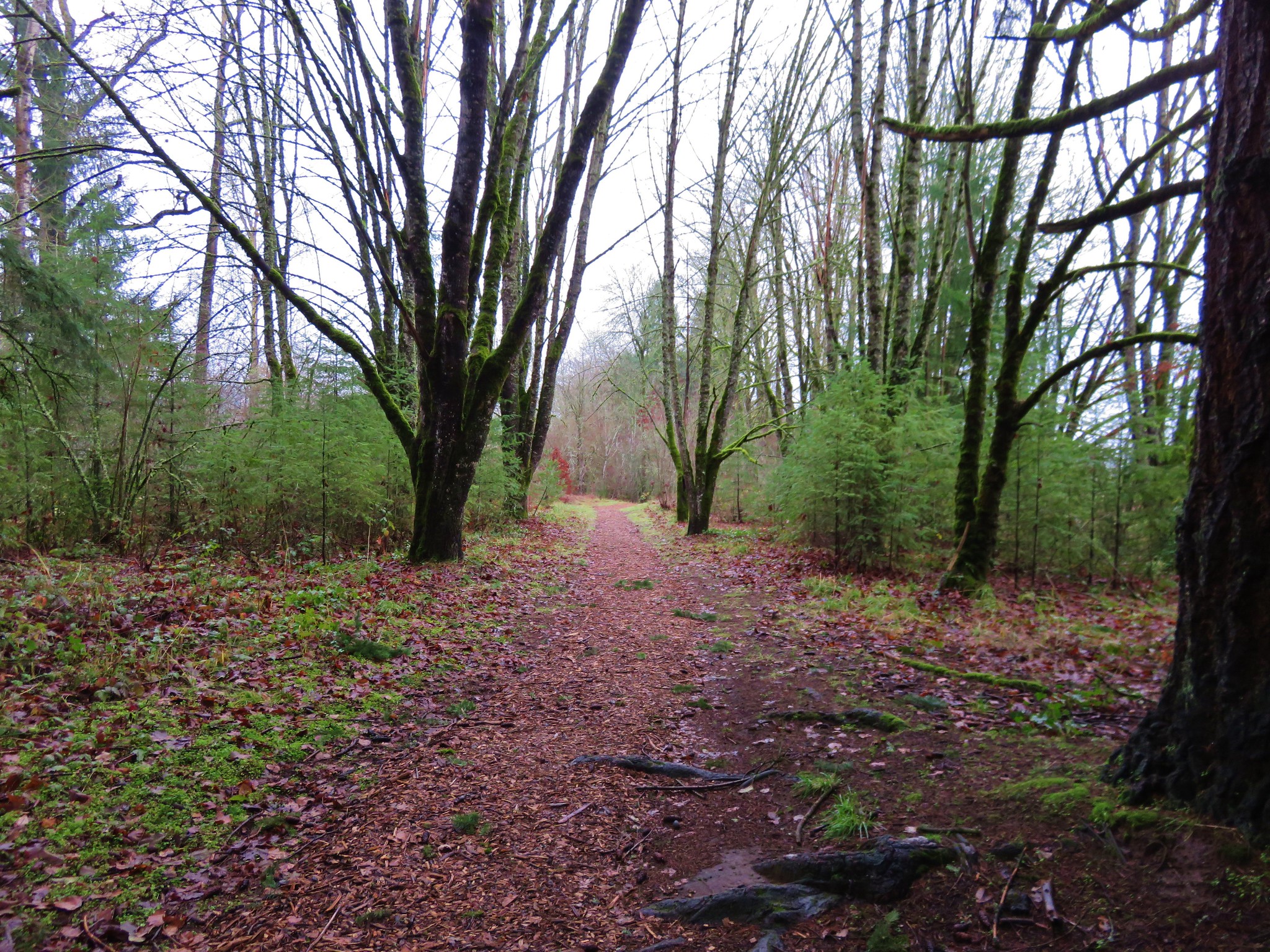 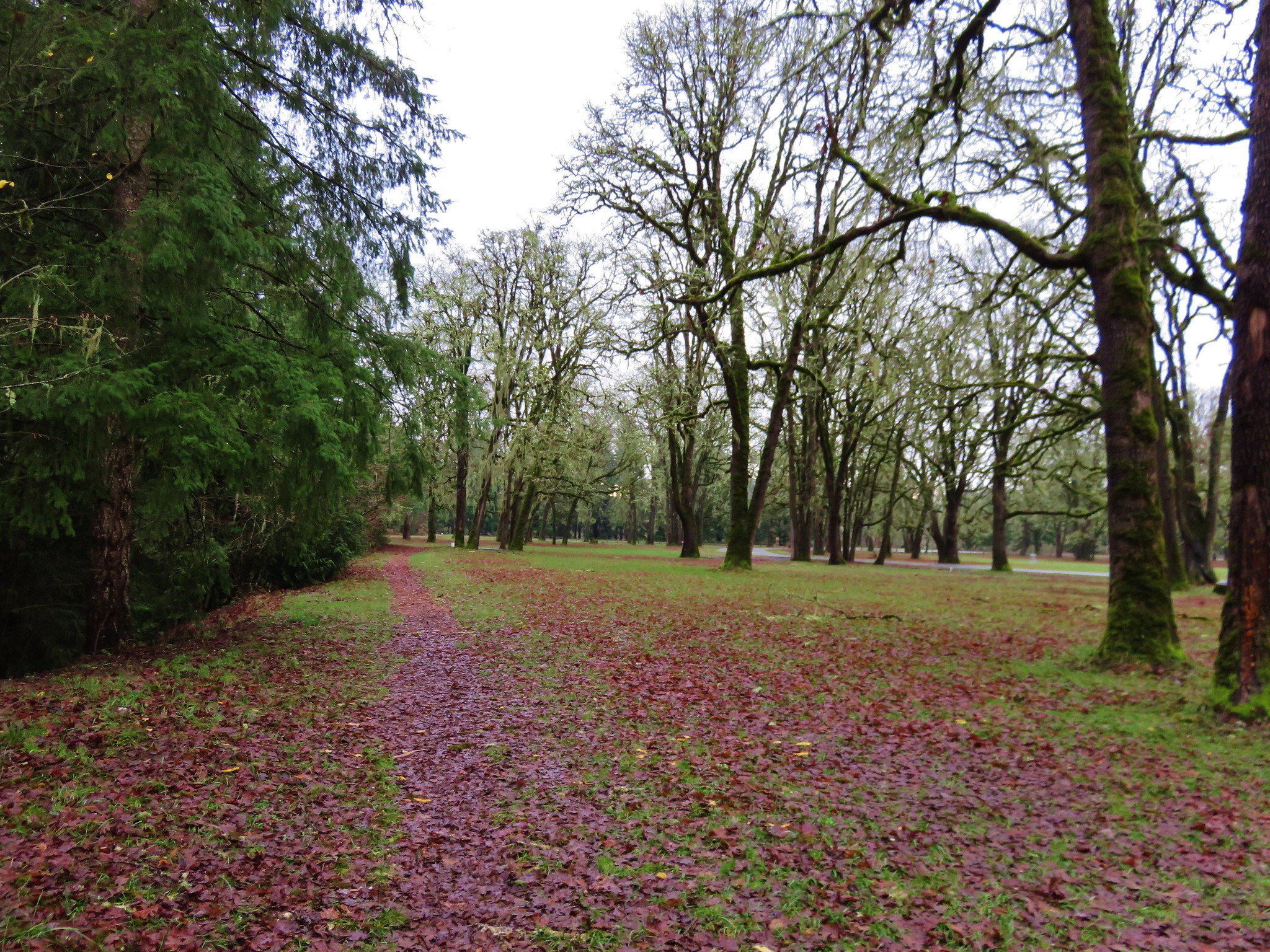 We followed the path to a backed up Champoeg Creek and crossed on the road bridge leading to the campground. 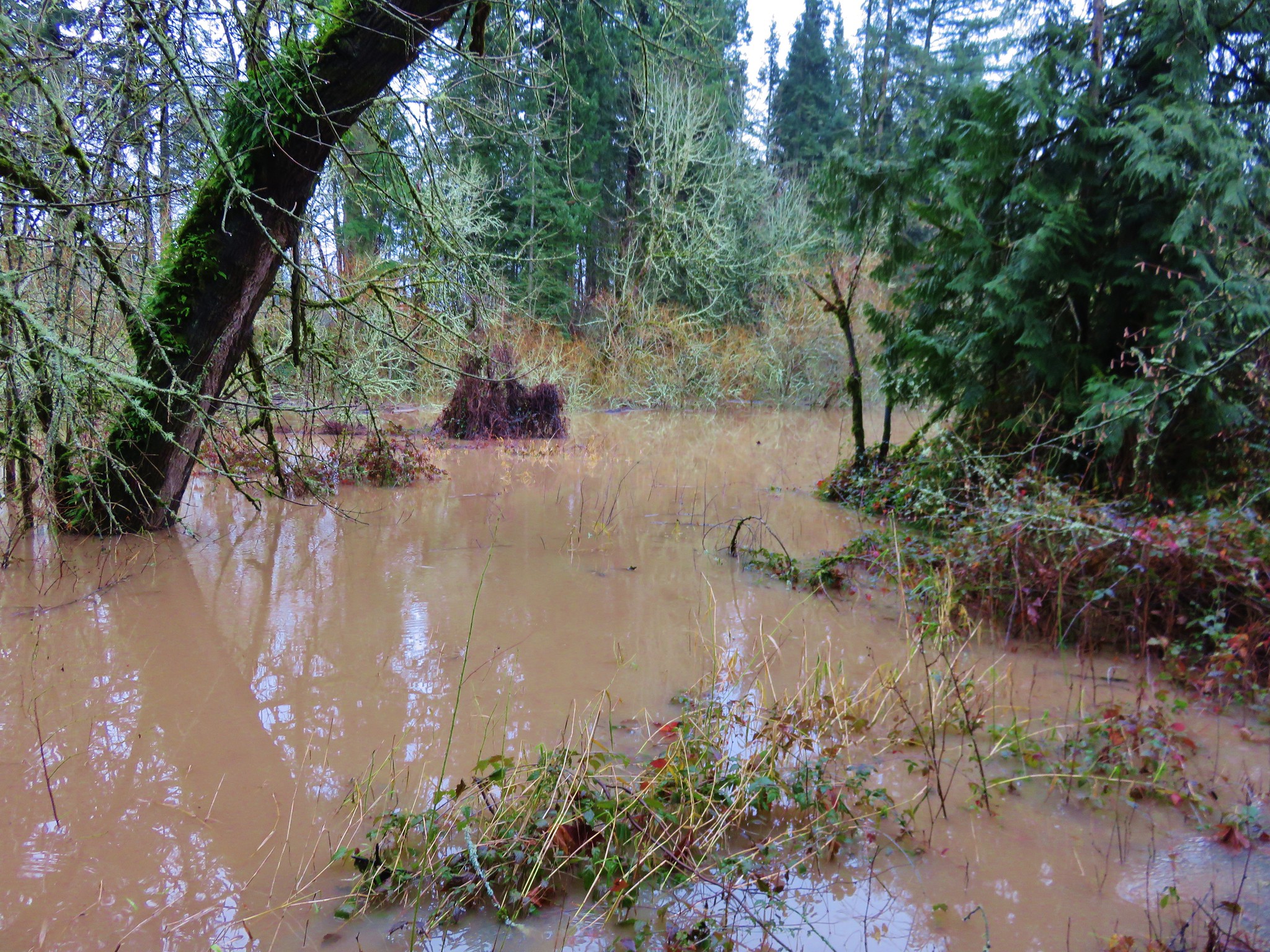 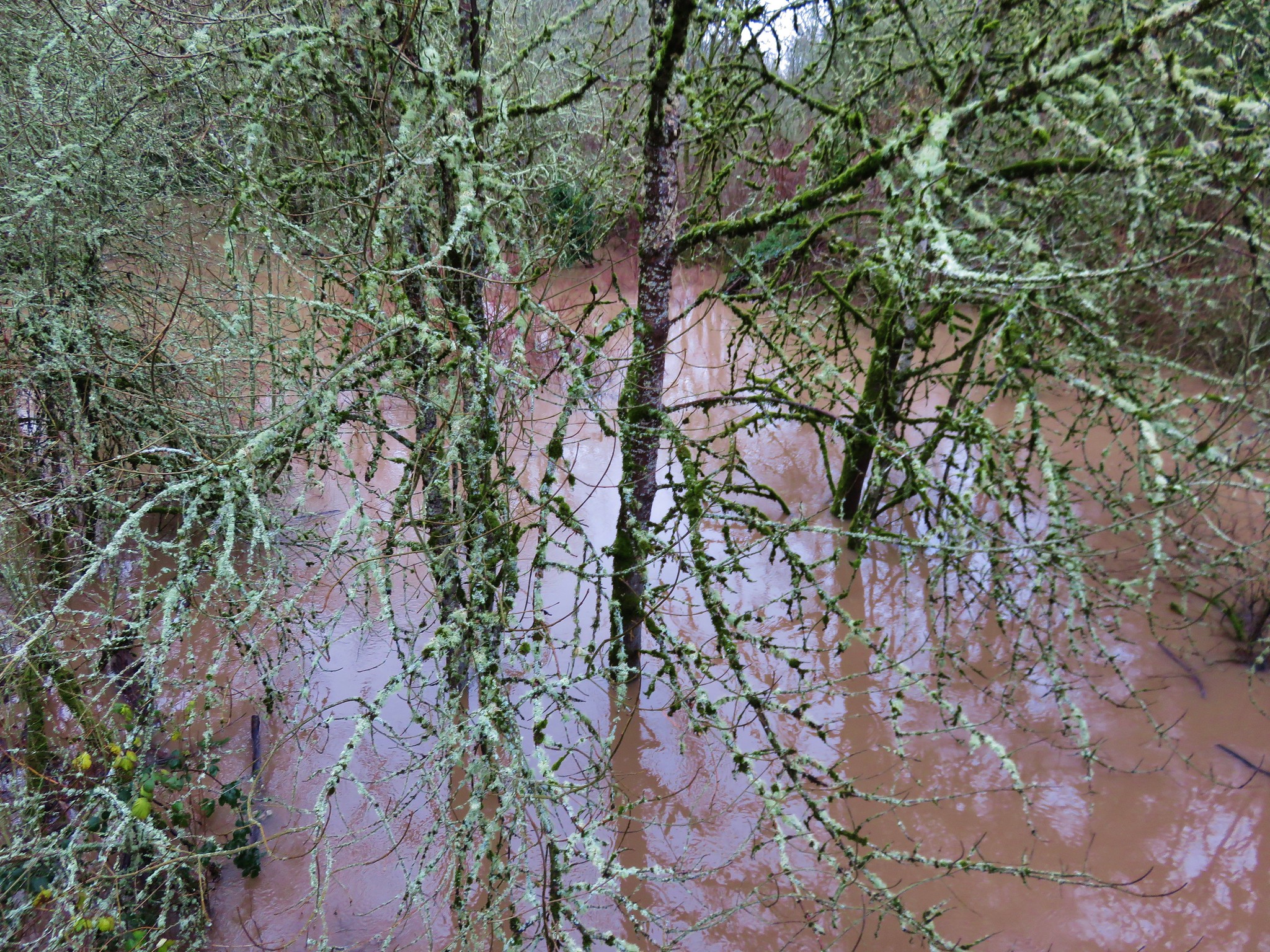 From the campground a paved bike path leads 2.4 miles to the Historic Butteville Store. Established in 1863 it the oldest operating store in the State although it closes in the winter. 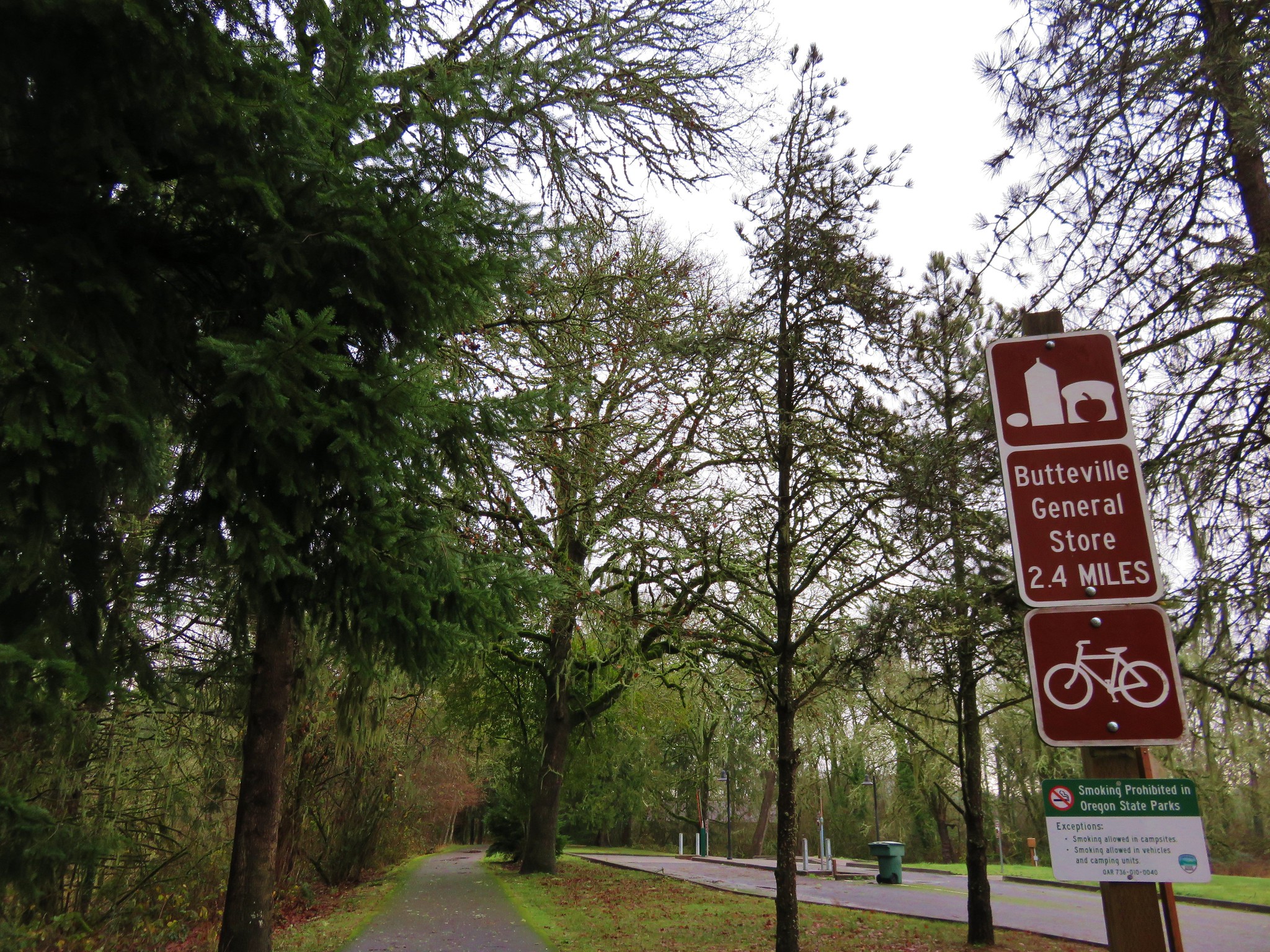 Two short hiker only side trails split from the bike path near the far end of the campground. 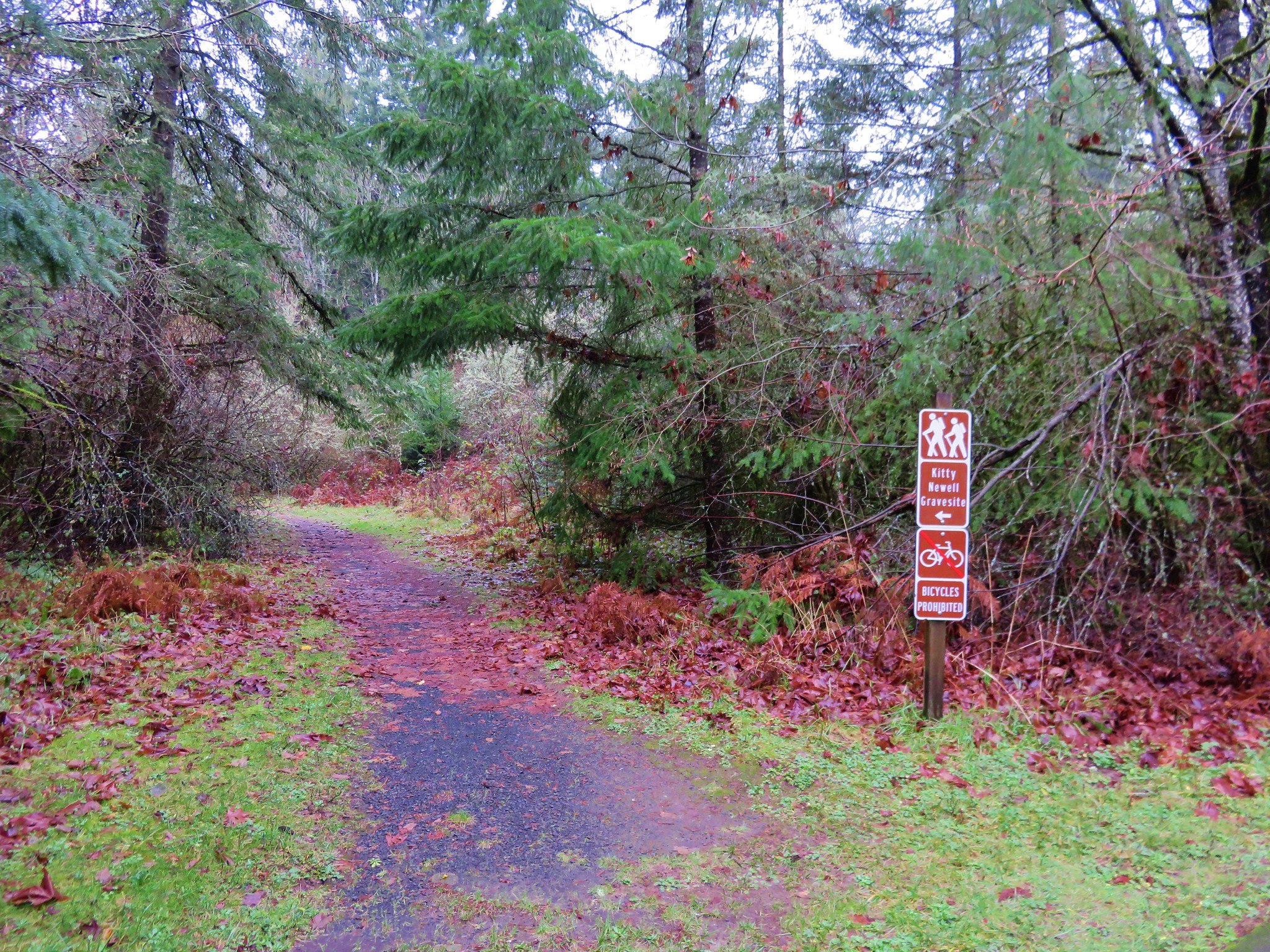 The first led to the grave site of Kitty Newell while the other was the short .4 mile Nature Trail Loop. 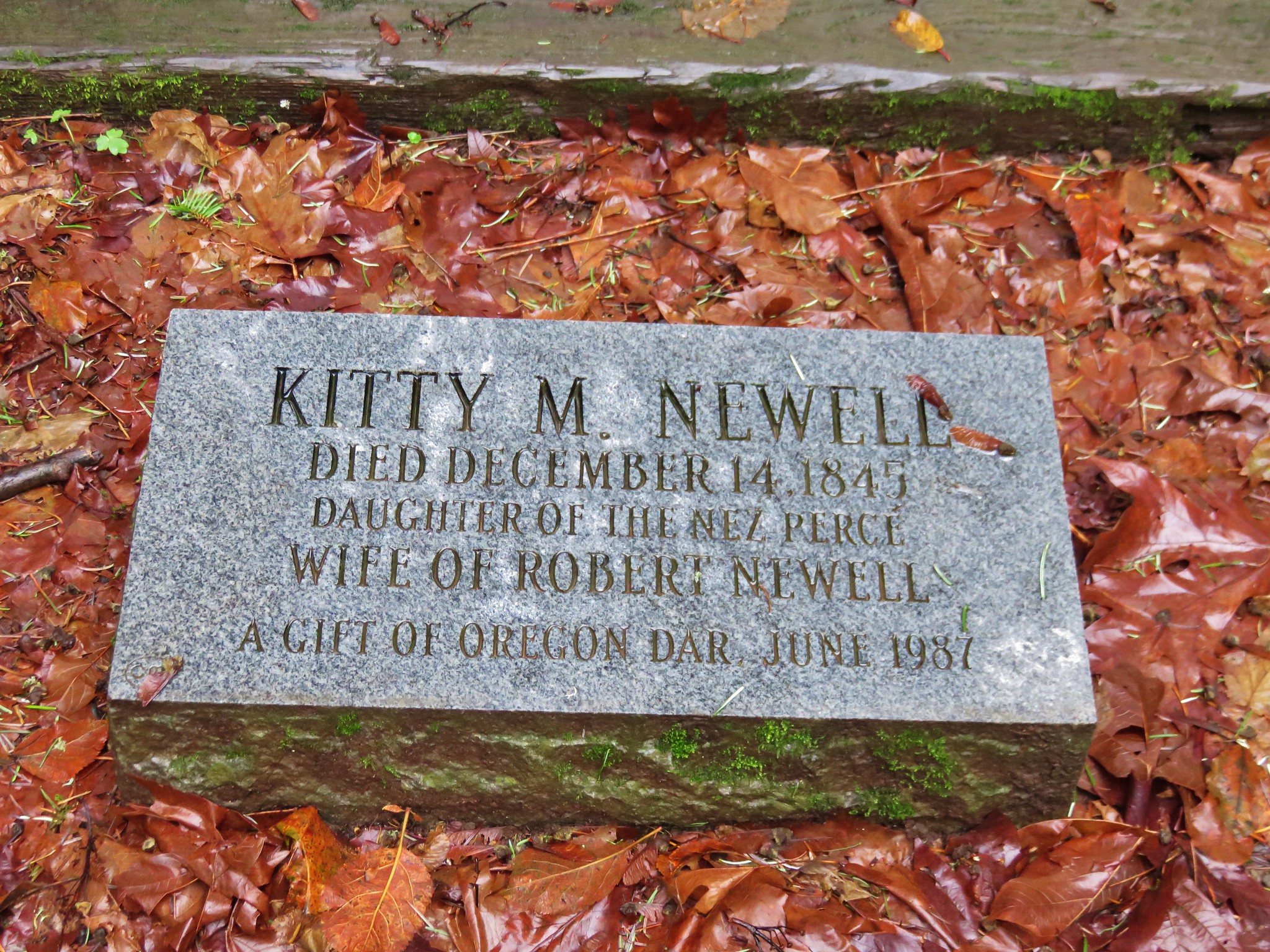 The bike path was clear of water and we followed it along the Willamette. Houses lined the far side of the river, but on our side was a mossy forest. 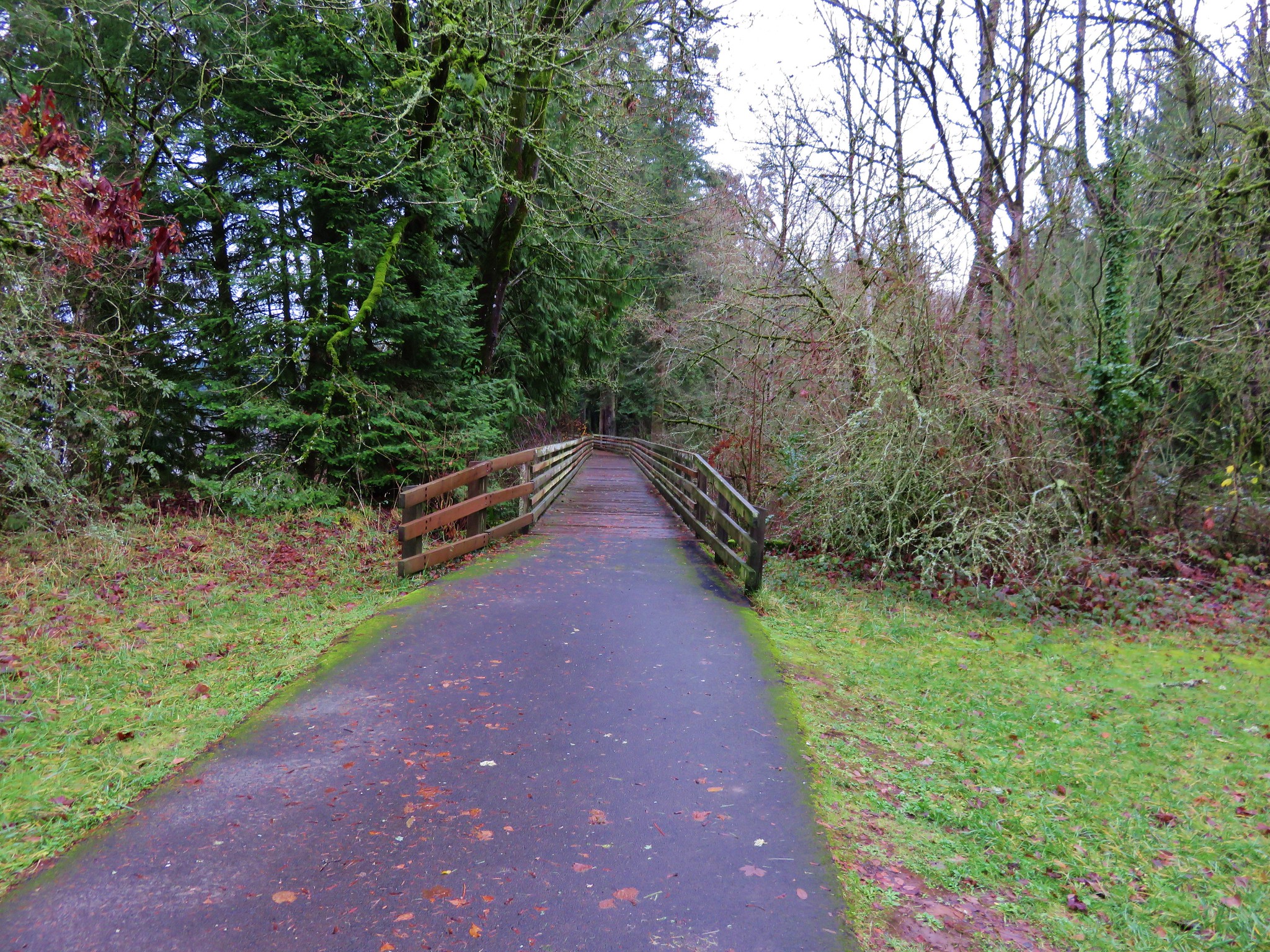 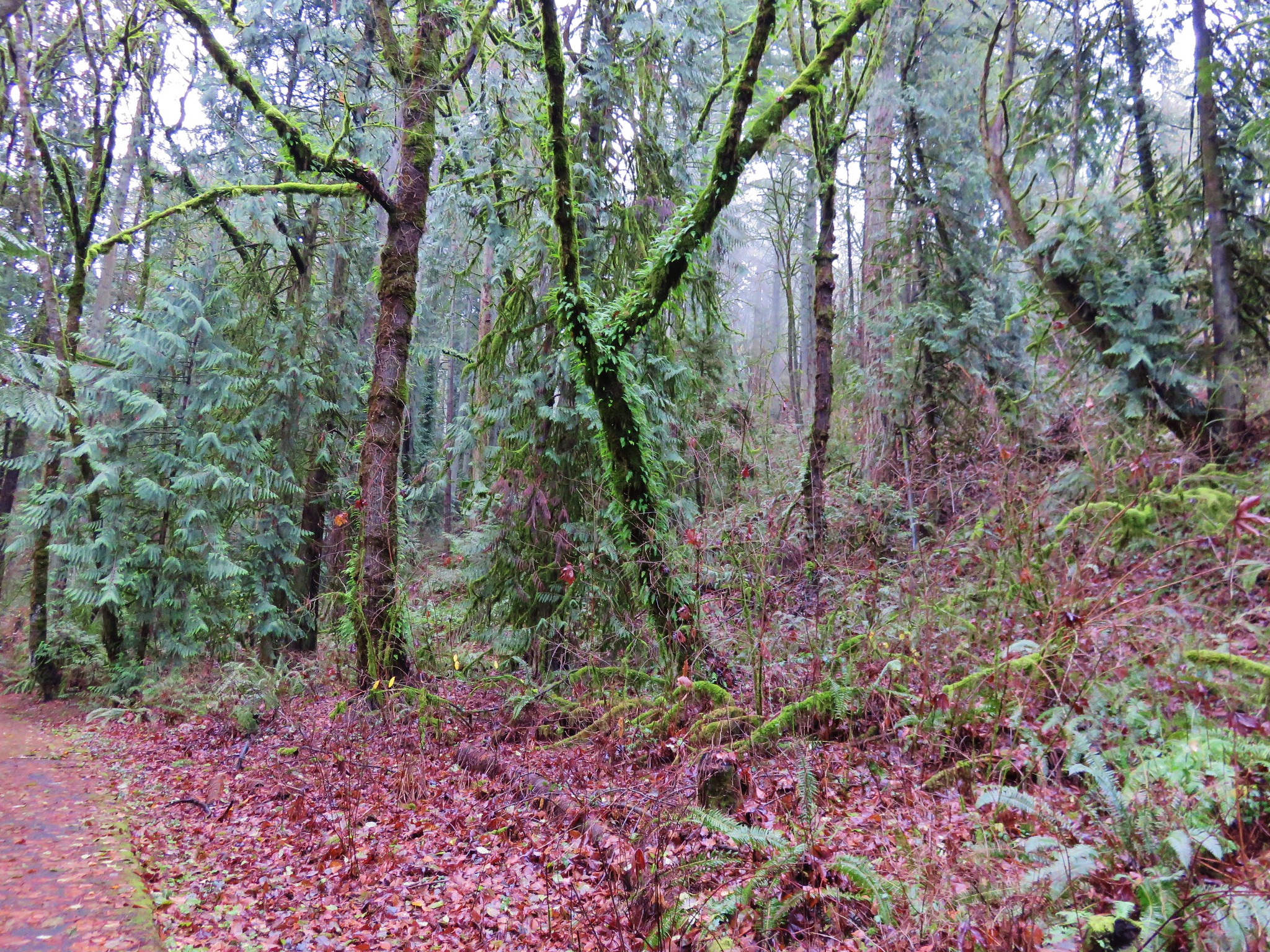 The final .6 miles to the store require some road walking, first along narrow Schuler Rd then downhill on what was a busy Butteville Rd. 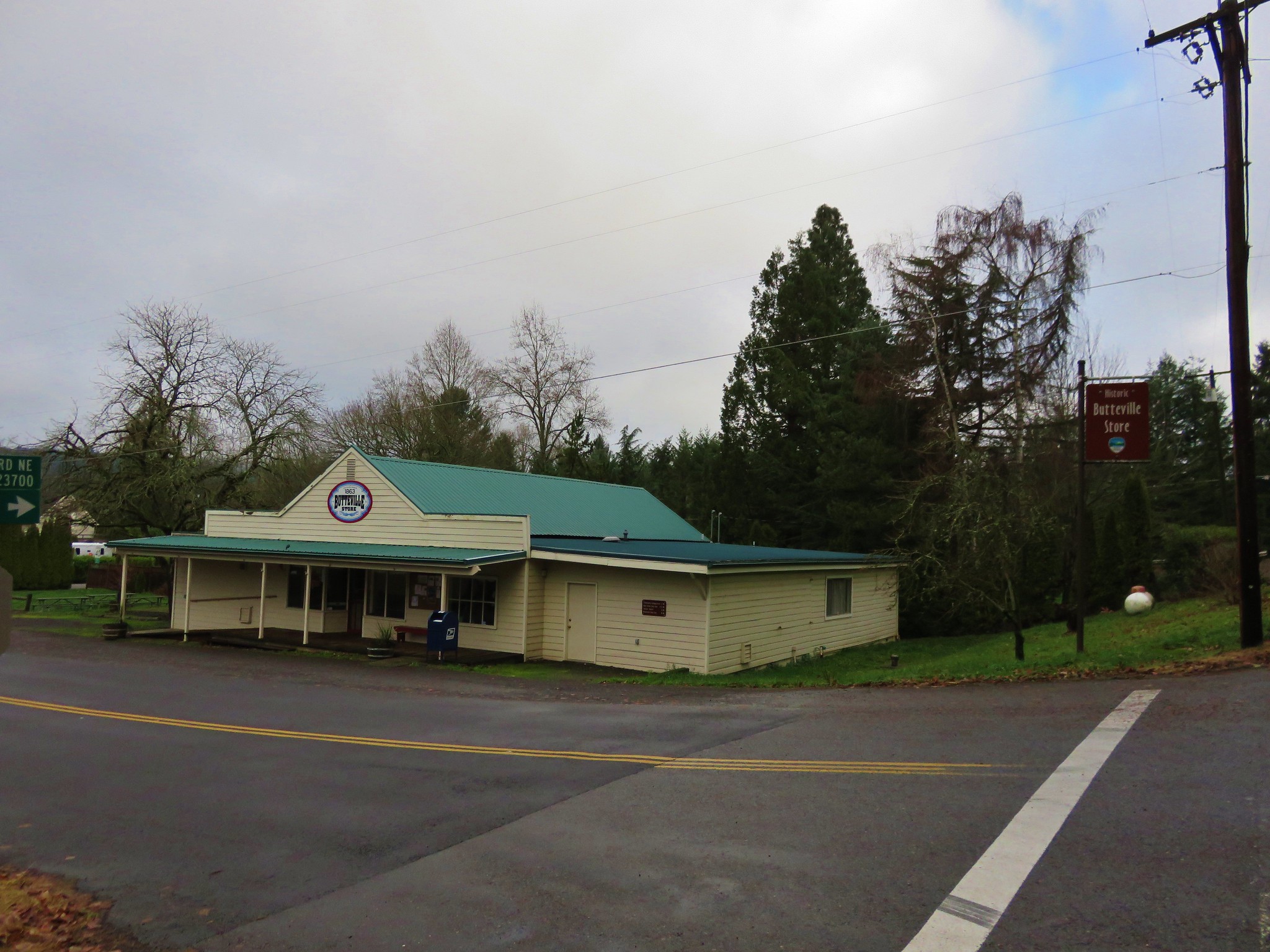 On our way back we remained on the paved bike path after recrossing Champoeg Creek. This route would bring us back on a loop around open farmland and the park’s Frisbee golf course. 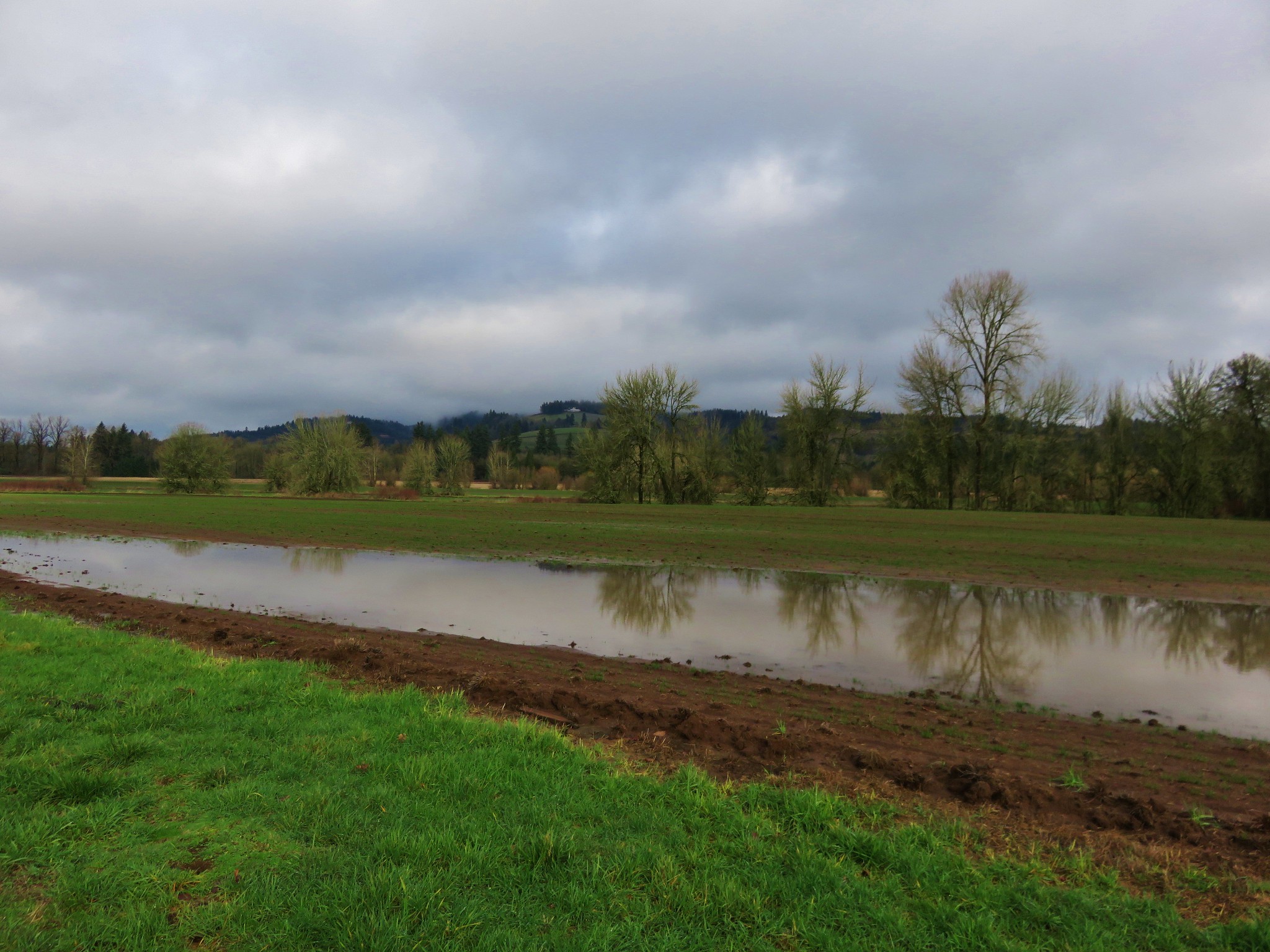 We spotted a number of birds along this portion including an Acorn Woodpecker. 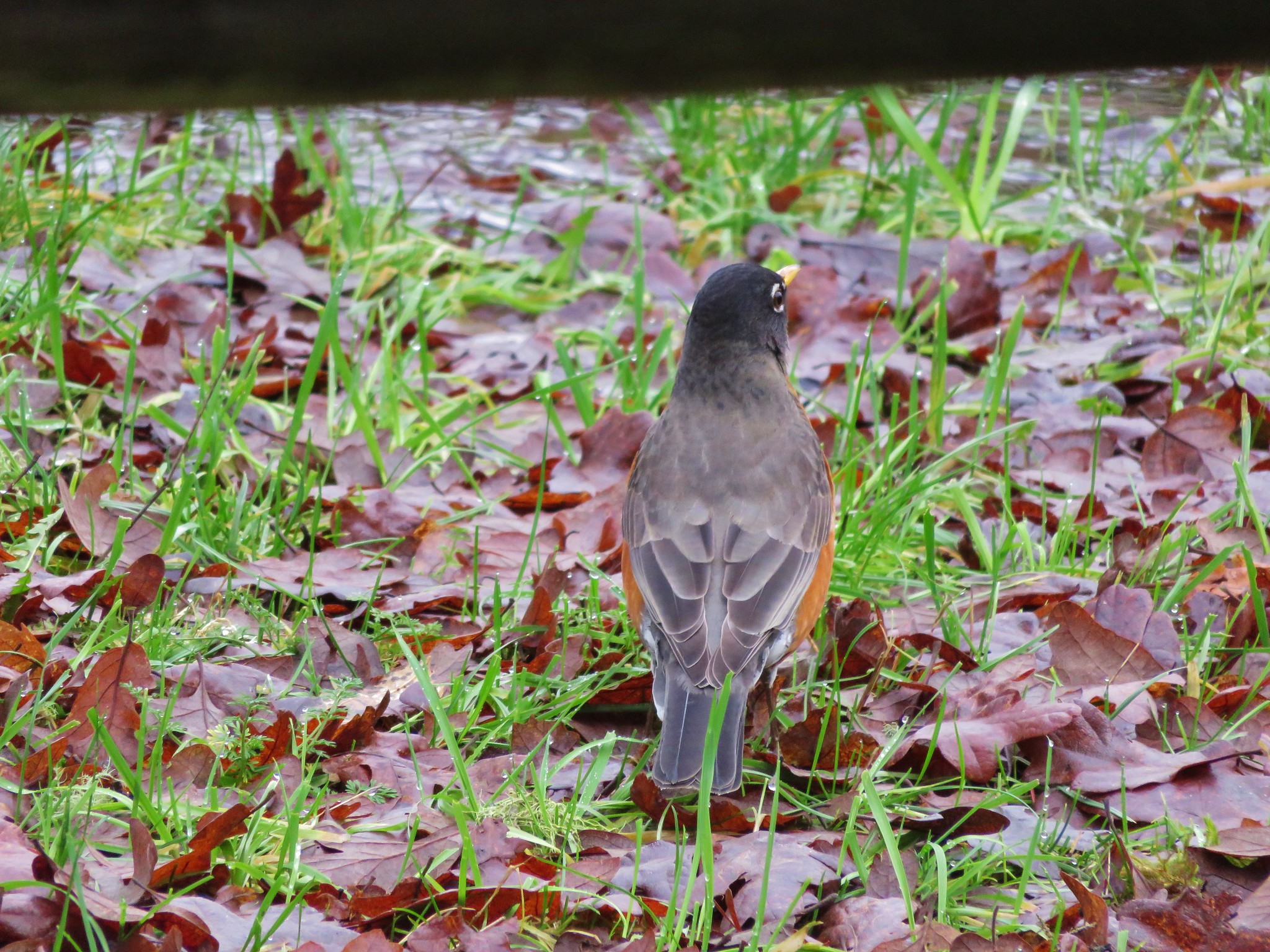 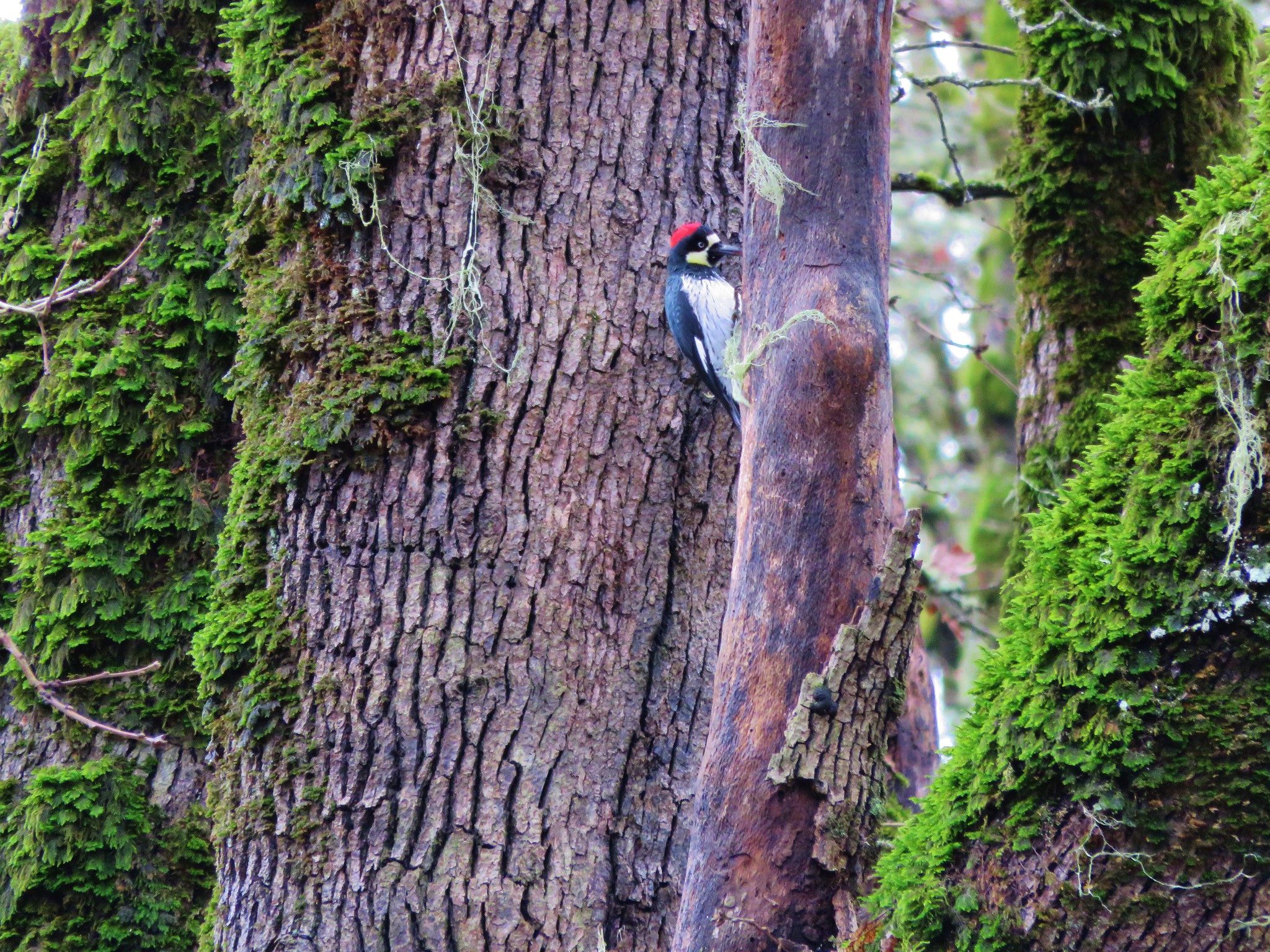 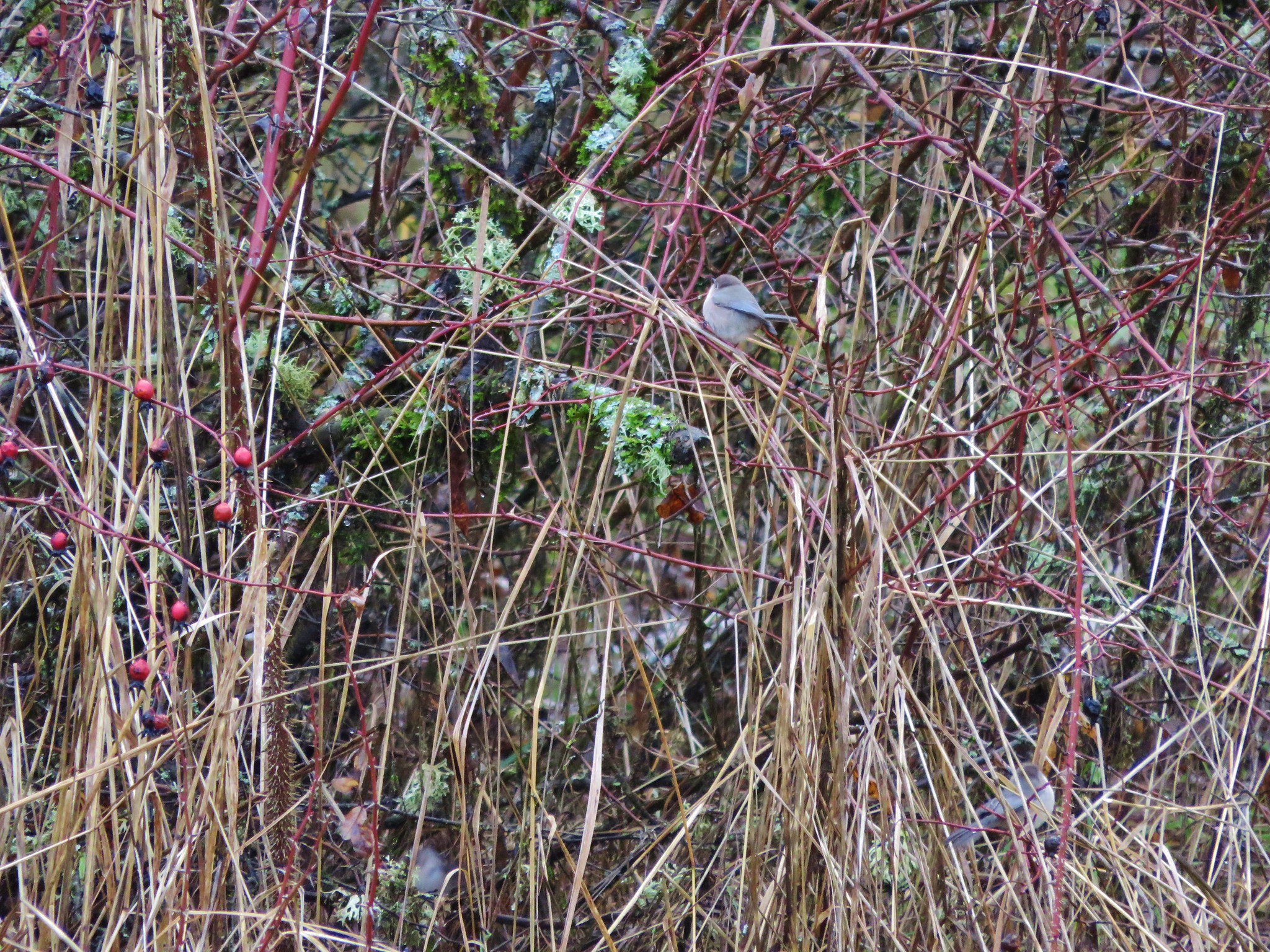 Near the end of the loop we spotted a tree with markers showing the water levels during the 1861 flood and the more recent 1996 flood. 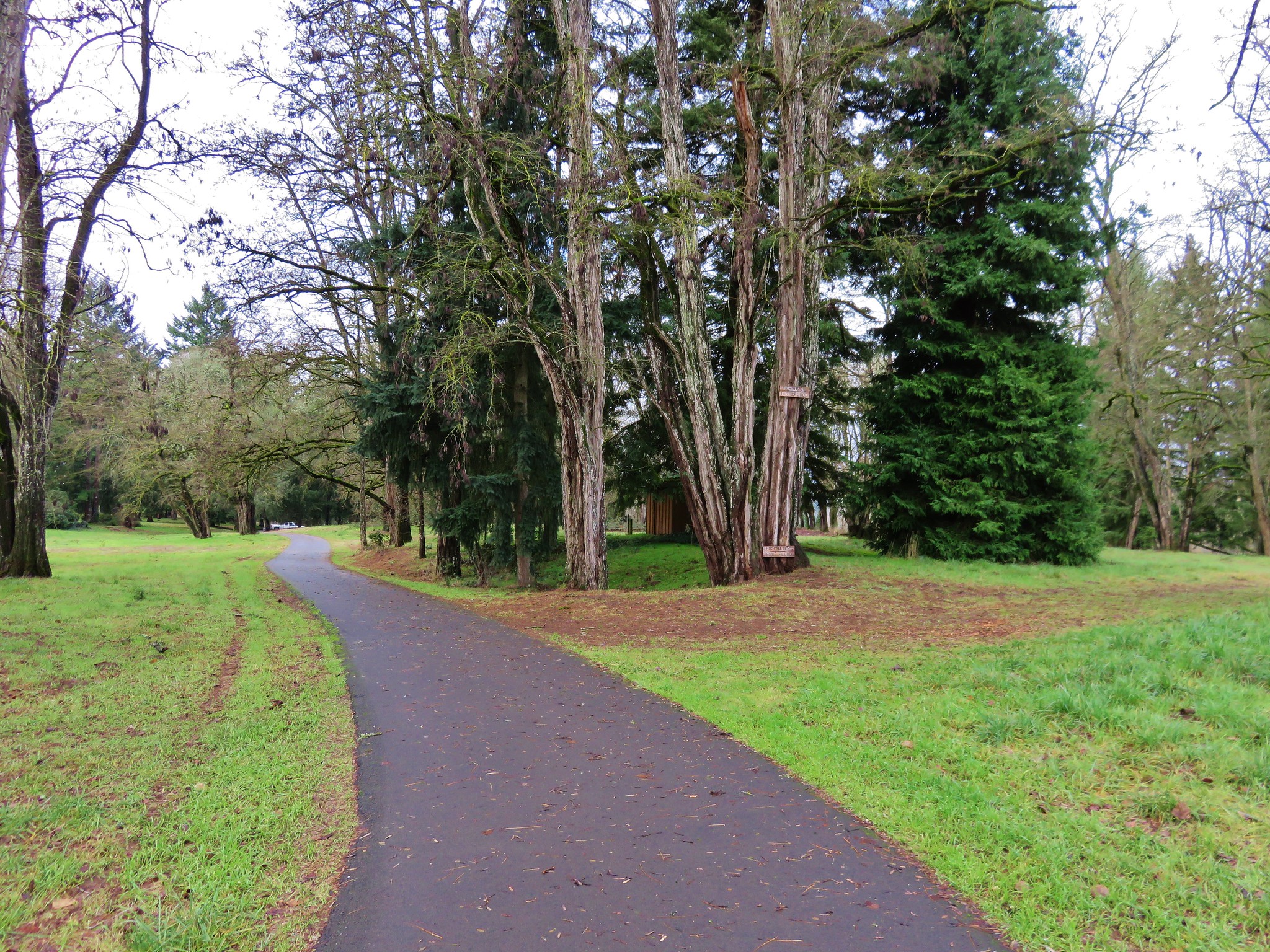 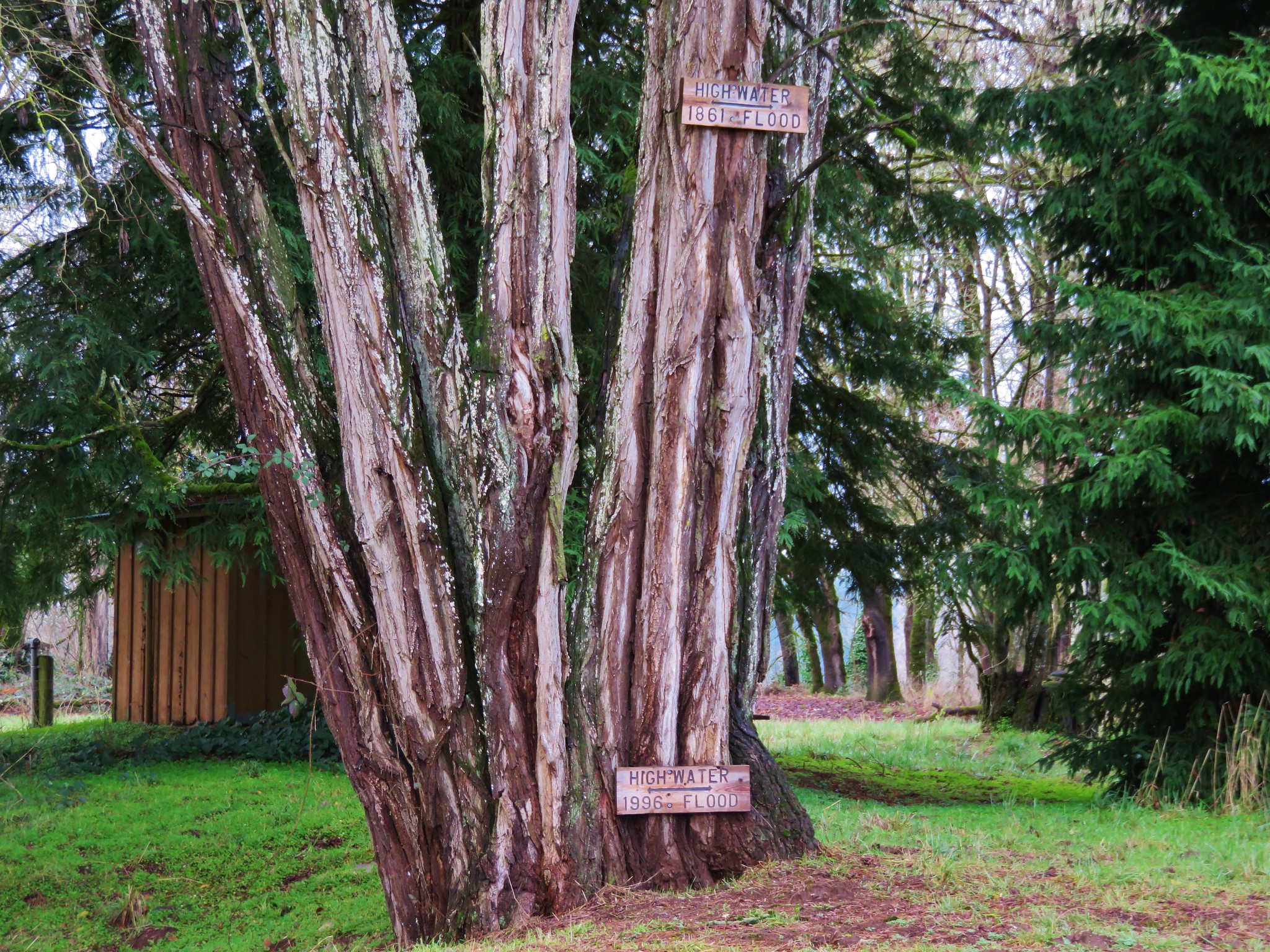 We lived in Monmouth, OR in 1996 so we remembered the 1996 event. It was hard to fathom how much more water there would have needed to be to reach that 1861 mark. We finished up our hike and began to drive back out of the park, but as we were sitting at a stop sign I looked out the passenger window to see an American Kestrel sitting in a tree only 10 feet away. I reached back for the camera only to realize I had put it in the back of the car. As a rule I keep it in the back seat because of the amount of wildlife we seem to wind up seeing from the car instead of on the hikes, but I hadn’t this time. The kestrel flew off and landed in another tree a little further away, so I hopped out and got the camera out of the back in hopes of getting a picture. It changed trees one more time before I was able to jog over to the bike path (which just happened to pass near the road here) and get a semi decent photo. 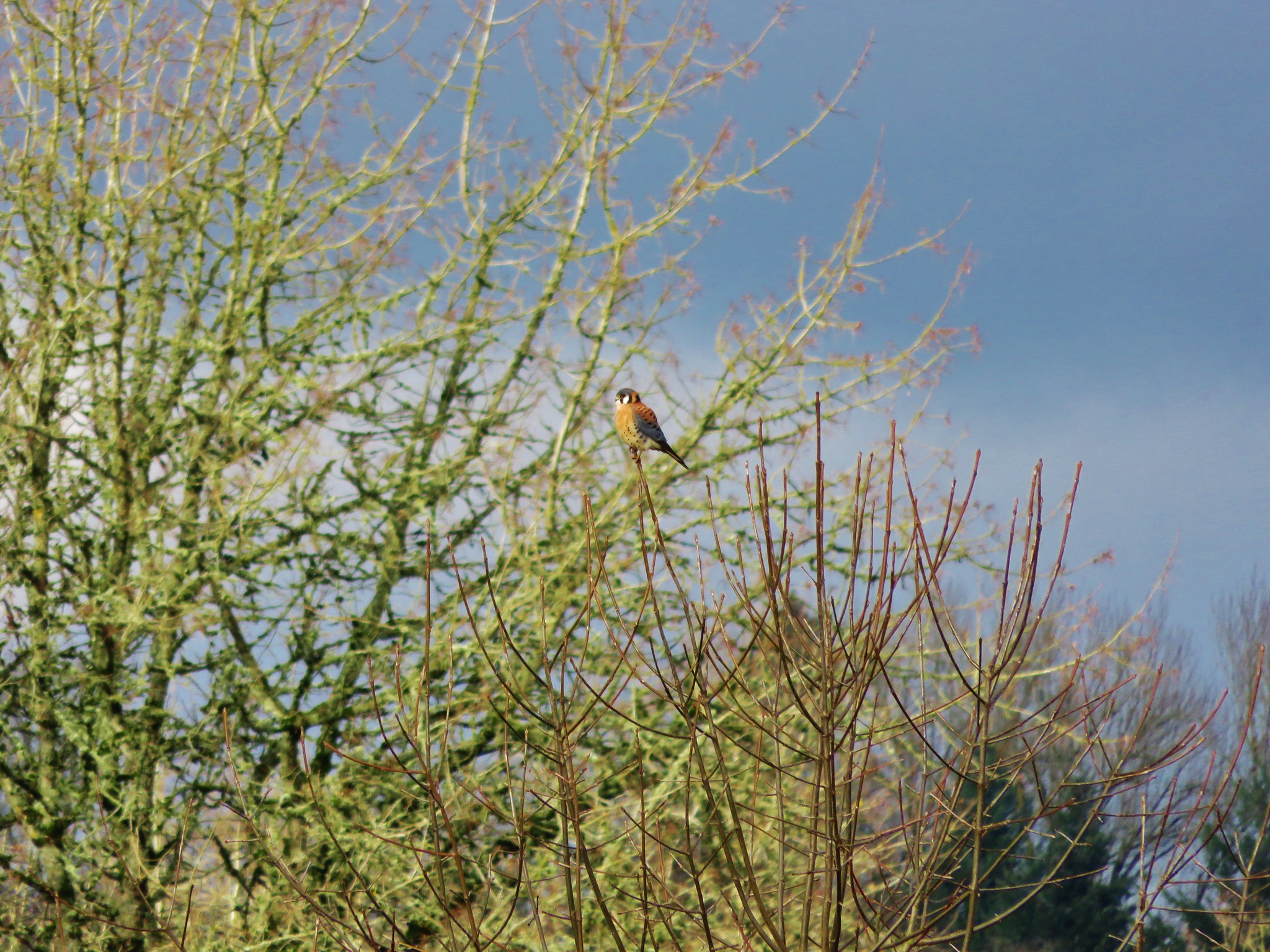 This wasn’t one of our typical hikes, but knowing the history of the area made it an interesting hike. If you’re interested in more information on this area or for other historical Oregon hikes check out Hiking Oregon’s History by William L. Sullivan. 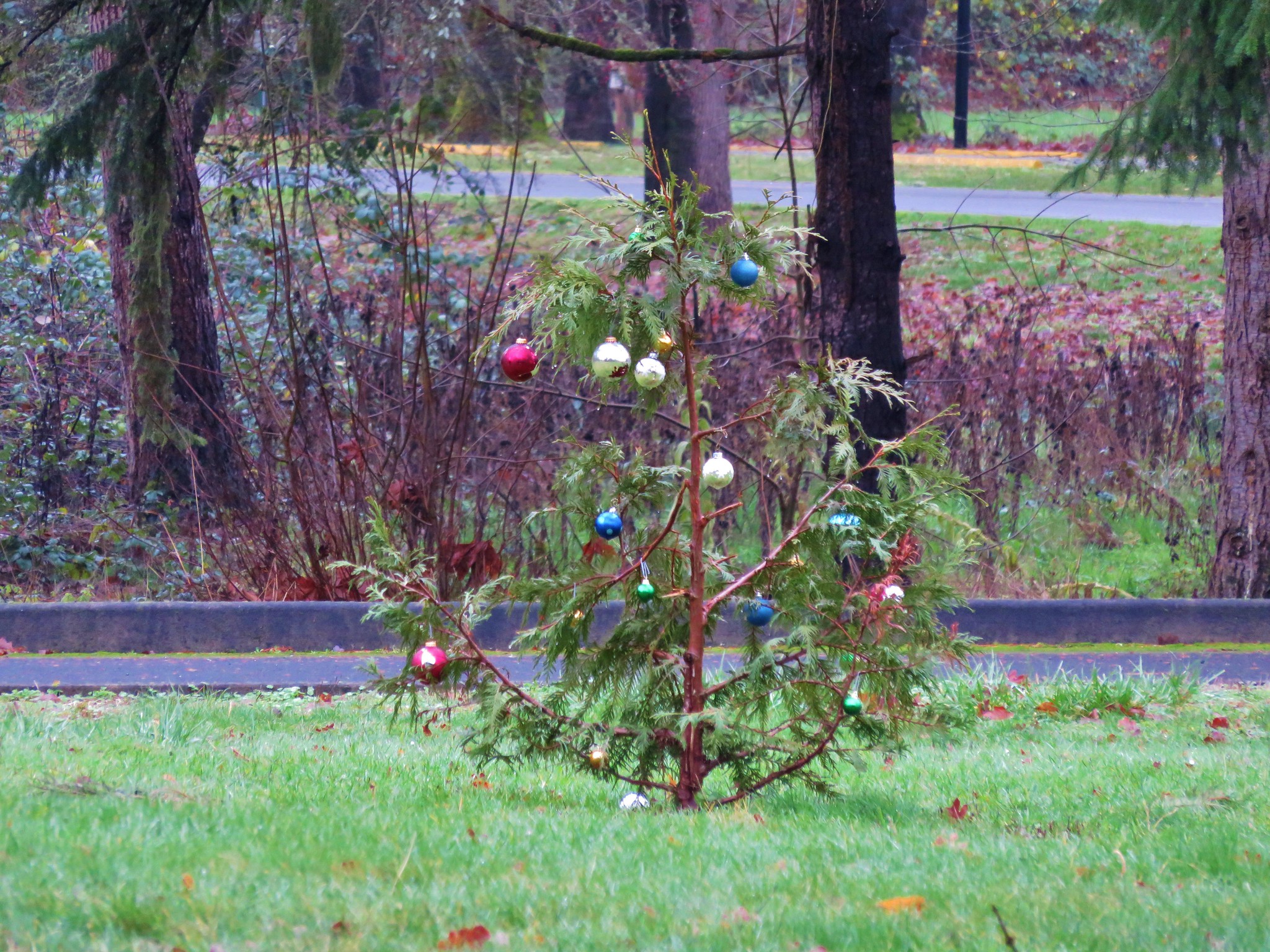