For the final hike of our Southern Oregon trip we had pegged the Union Creek Trail, the only featured hike that only I had done. Heather had been forced to skip this one after hurting herself at Abbott Butte in 2020 (post). Sullivan has been working on an update to his Southern Oregon book and it will be interesting to see if the Union Creek hike remains a featured hike. A 2015 storm downed many trees along the trail, the middle portion of which had not yet been cleared in 2020 when I’d attempted the hike. A quick look online led us to believe that two years later the conditions were the same so instead of attempting to reach Union Creek Falls from the Union Creek Resort we drove to the Upper Trailhead. To reach this trailhead we followed Highway 62 two miles east of its junction with Highway 230 turning right on Road 600 at a small Union Creek Trailhead sign. After 0.2 miles we veered left at another pointer for 0.1 miles to the parking area at roads end. 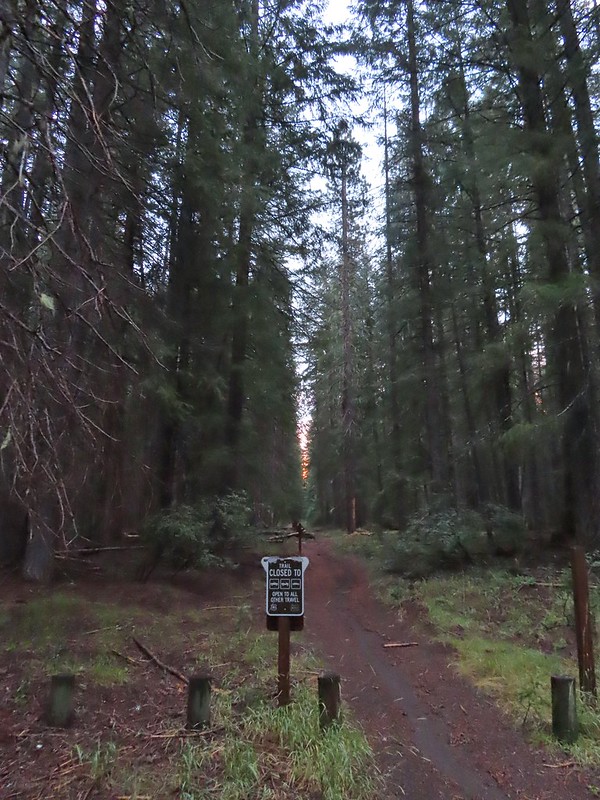 An OHV Trail continues on the old road bed from the parking area.

The Union Creek Trail is located at the SW corner of the parking area. 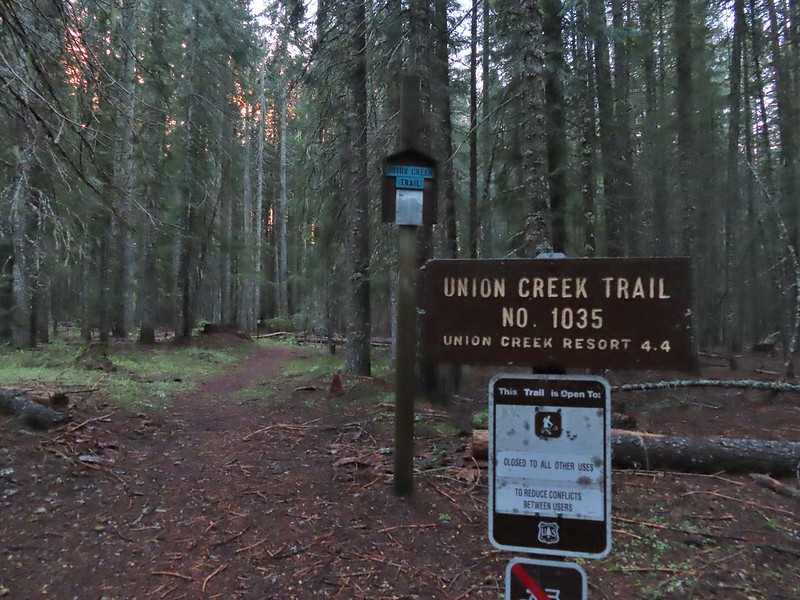 The upper portion of the trail was in great shape and we quickly found ourselves at Union Creek Falls just 0.3 miles from the trailhead. 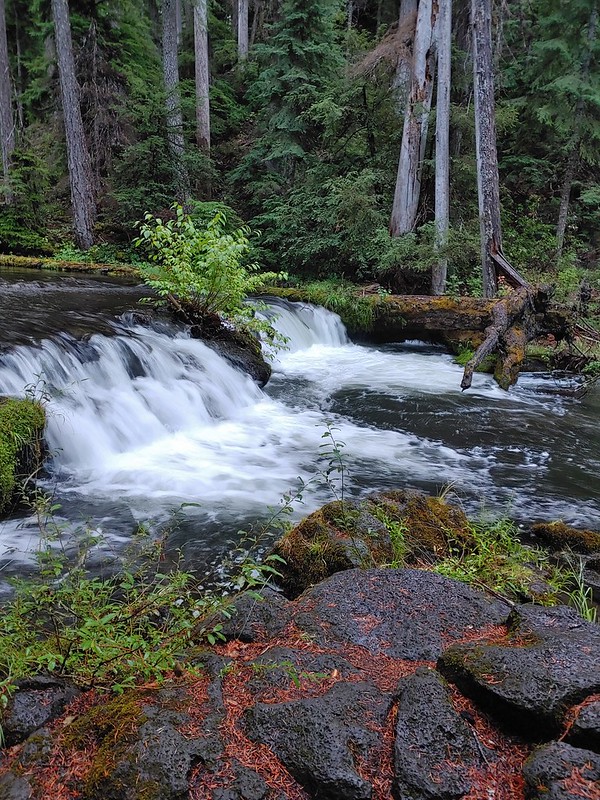 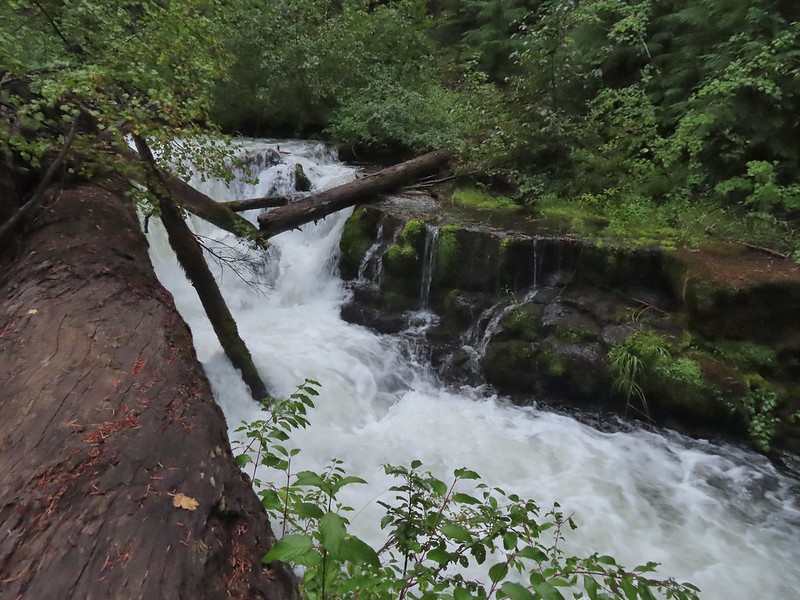 We continued another 0.7 miles before encountering the first real obstacle and began to wonder if by some miracle someone had finally shown this trail a little love. 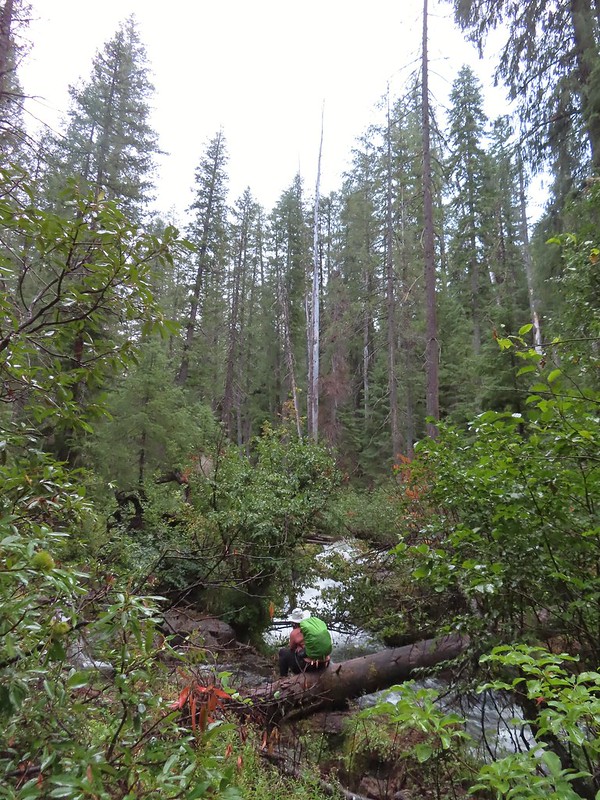 We had to get creative to see some of the many cool water features along the creek. 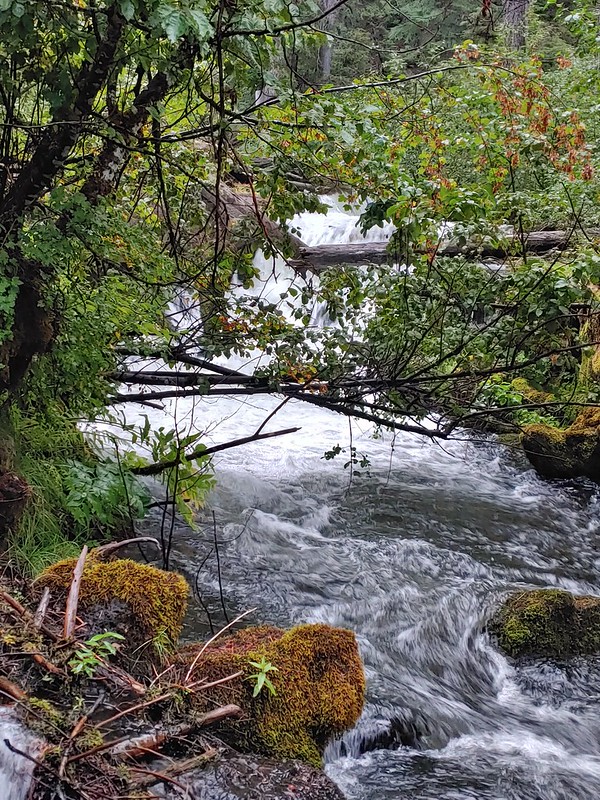 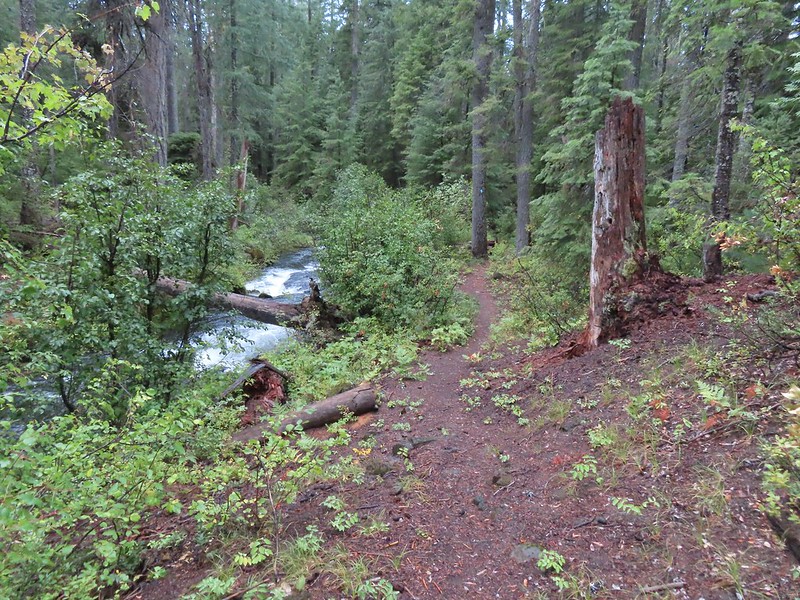 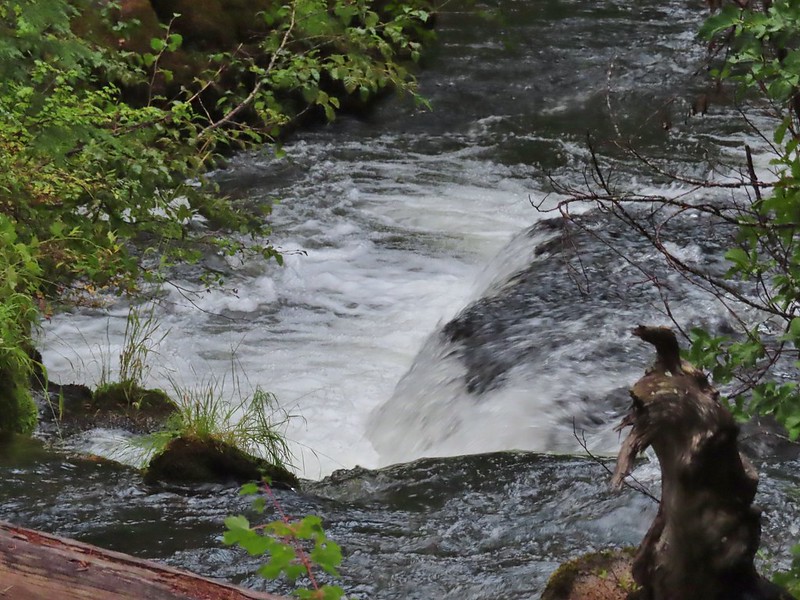 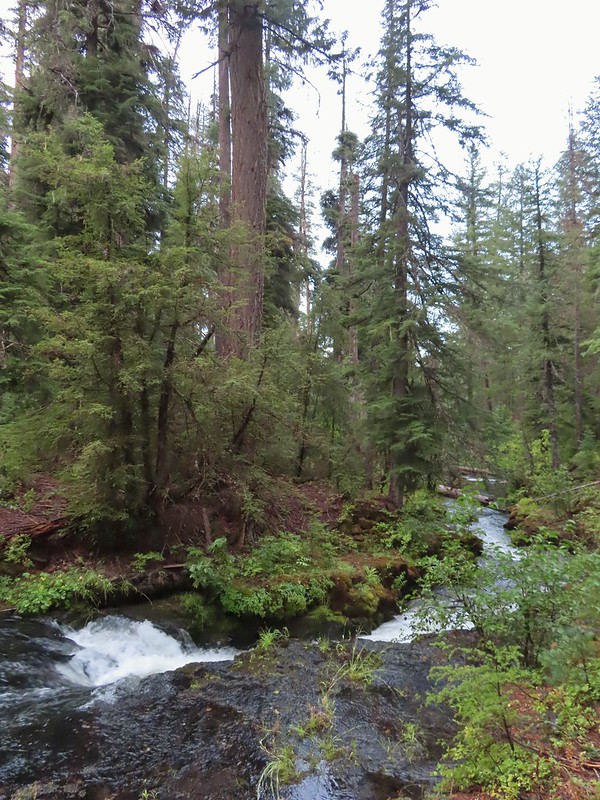 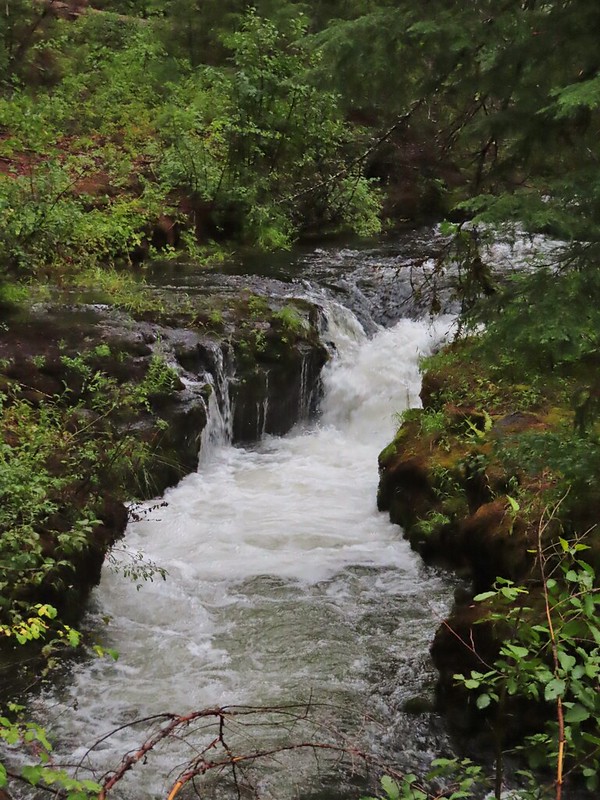 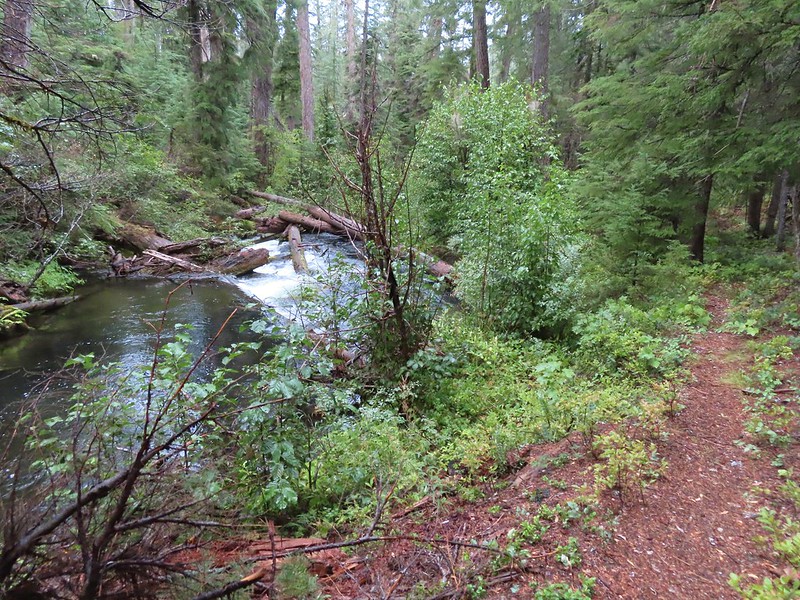 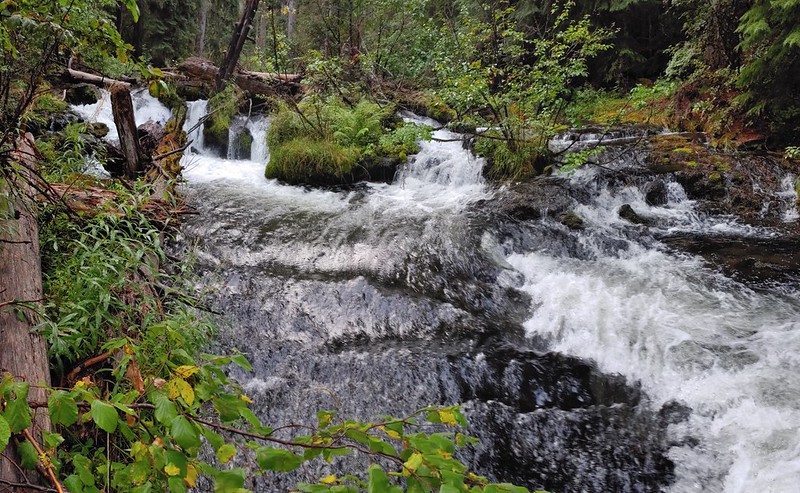 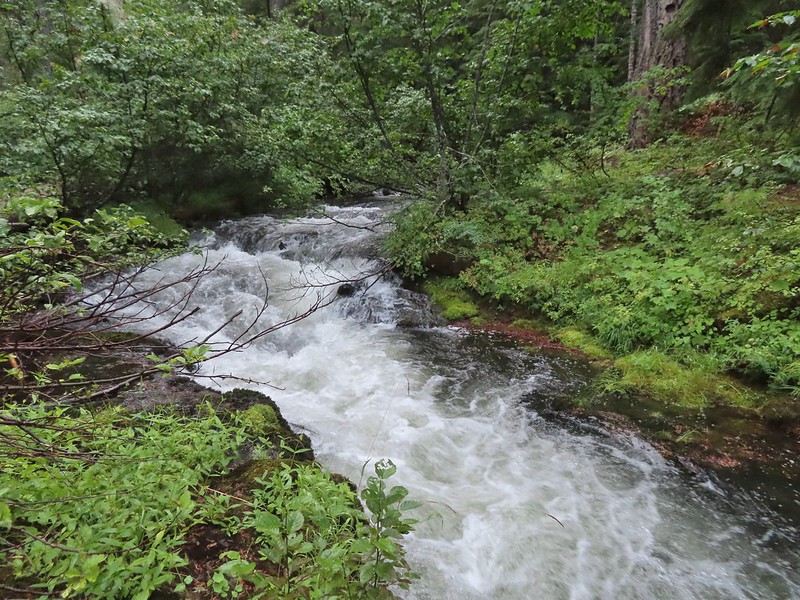 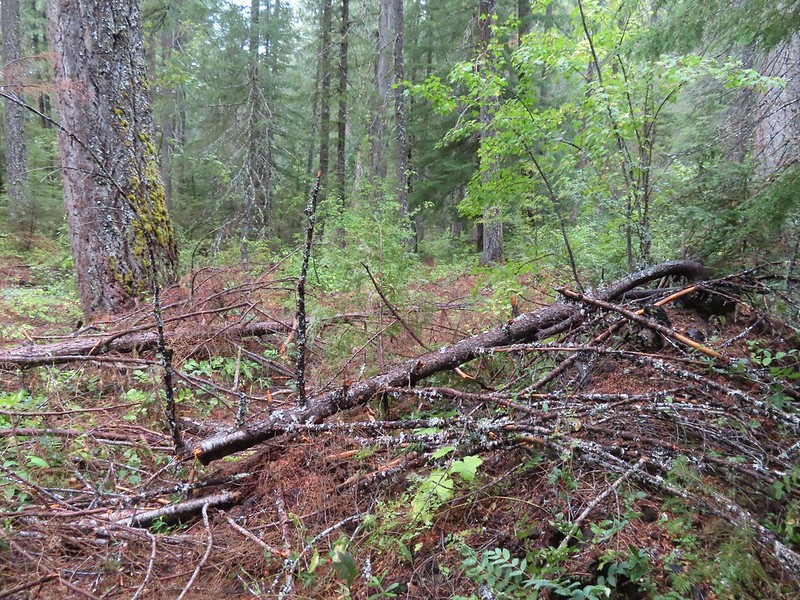 The first mess on the trail.

The trail conditions deteriorated quickly over the next half mile before we completely lost the trail at a large downed tree. Overnight rain had left the vegetation wet and we didn’t see any point in trying to force our way through the brush in an attempt to relocate the tread so we turned around and headed back. 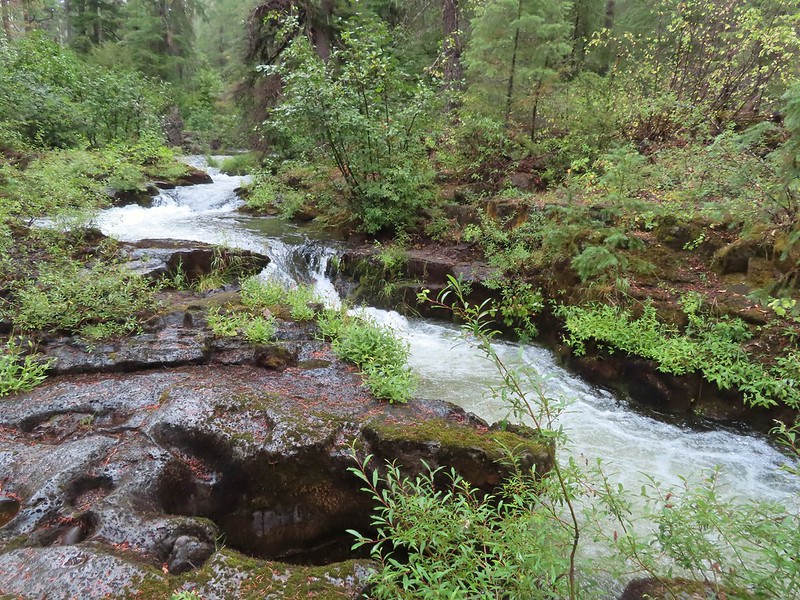 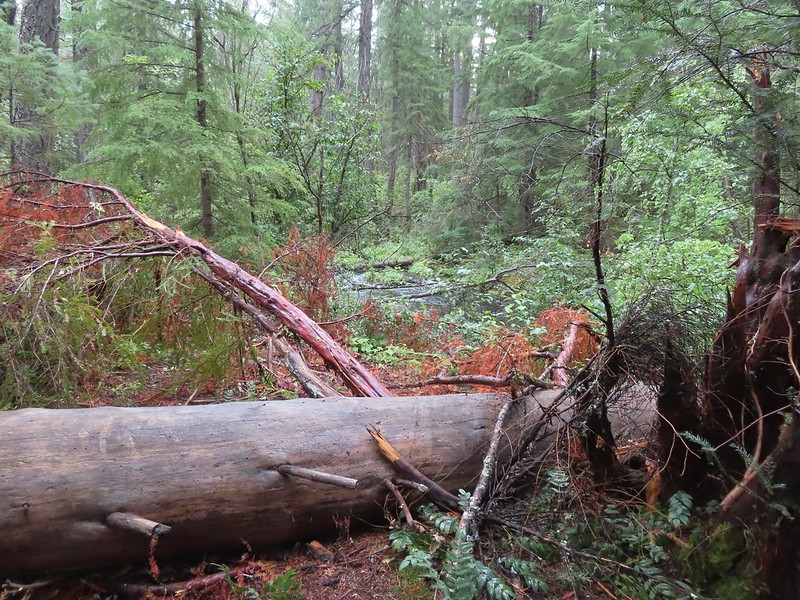 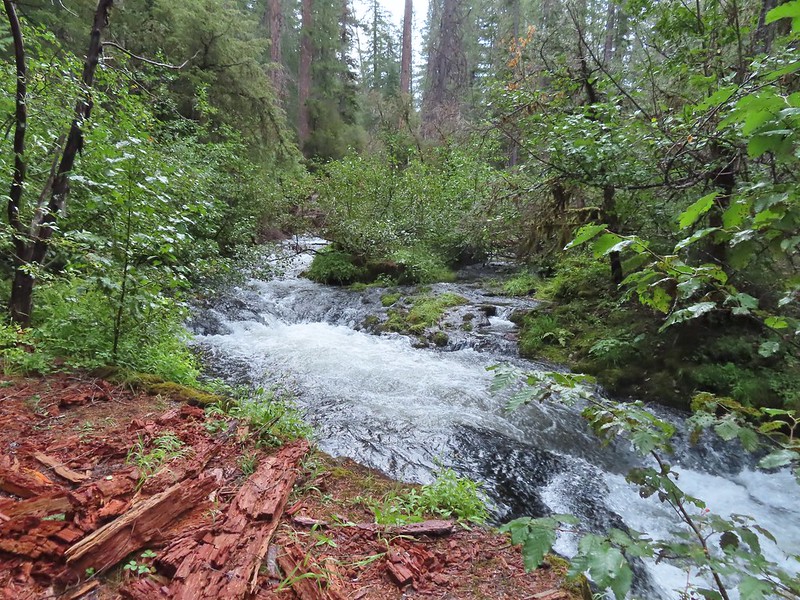 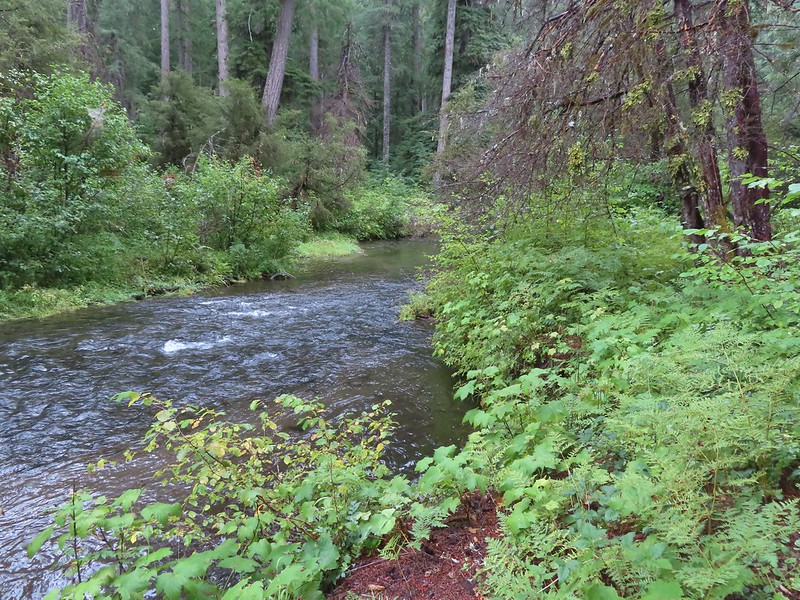 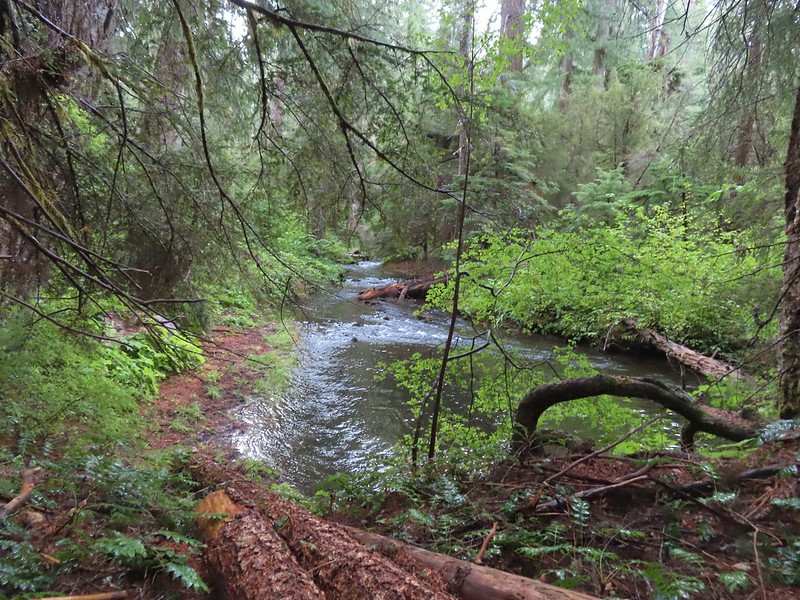 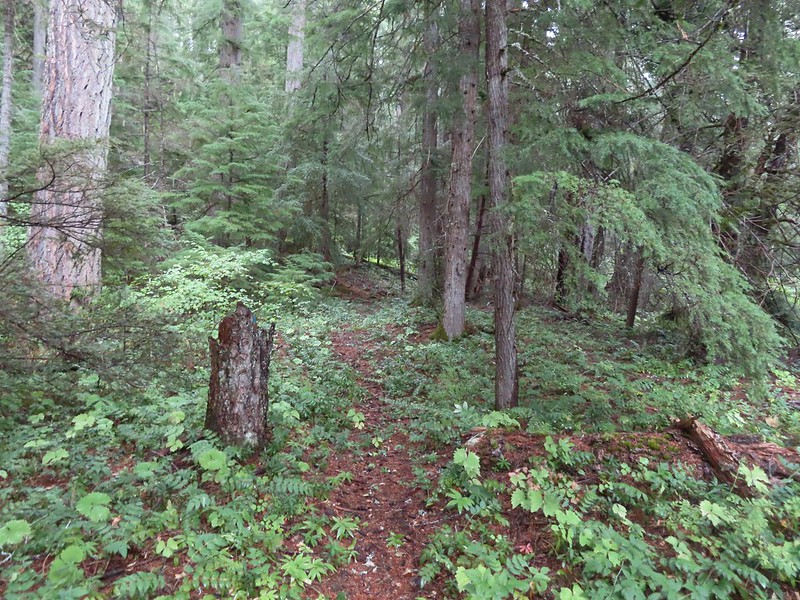 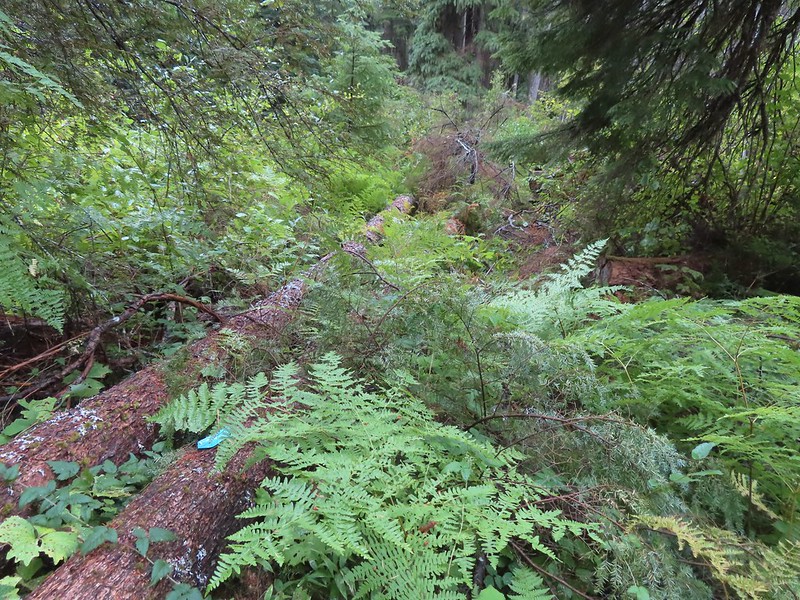 This mess was just before the bigger tree that turned us back.

On the way back we hopped a side channel onto an island to find a pretty impressive feature that had been hidden from the trail. 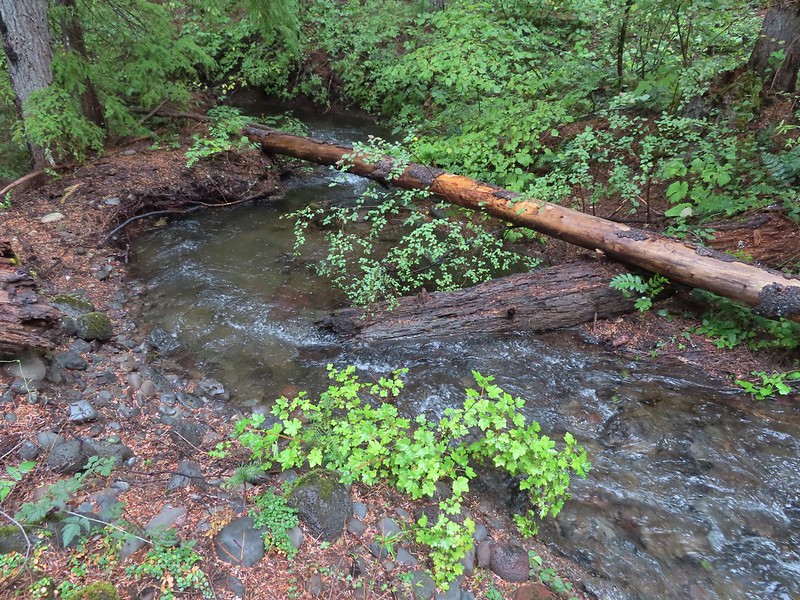 Where I crossed the channel. 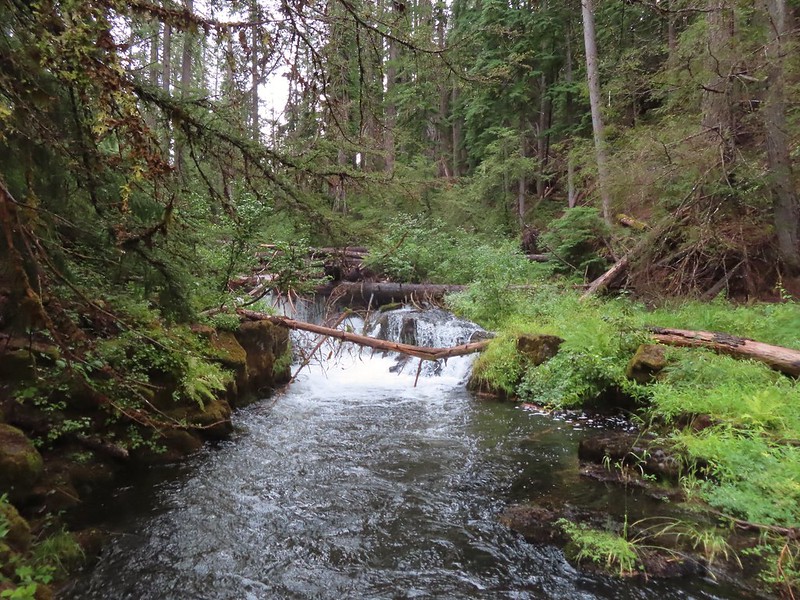 To get a good view I had to carefully follow a narrow ledge to an overlook of a thundering hole where water plunged in from all sides. 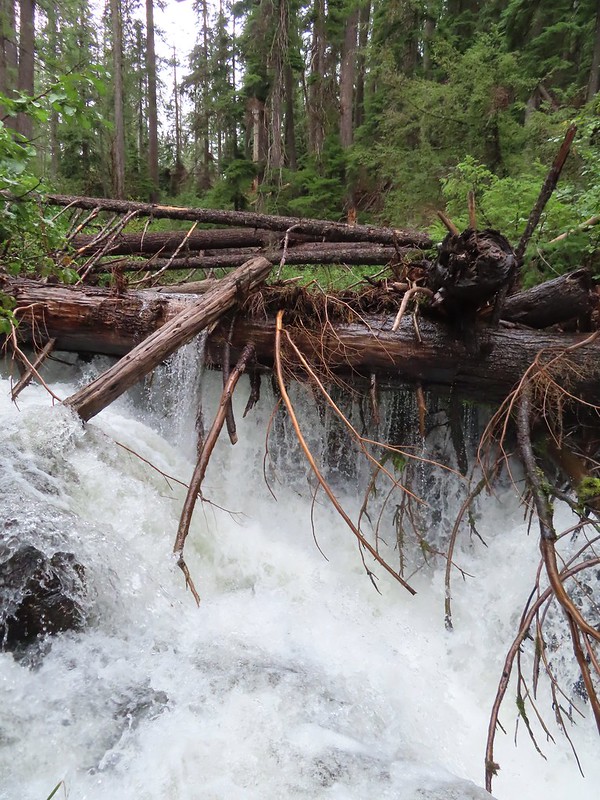 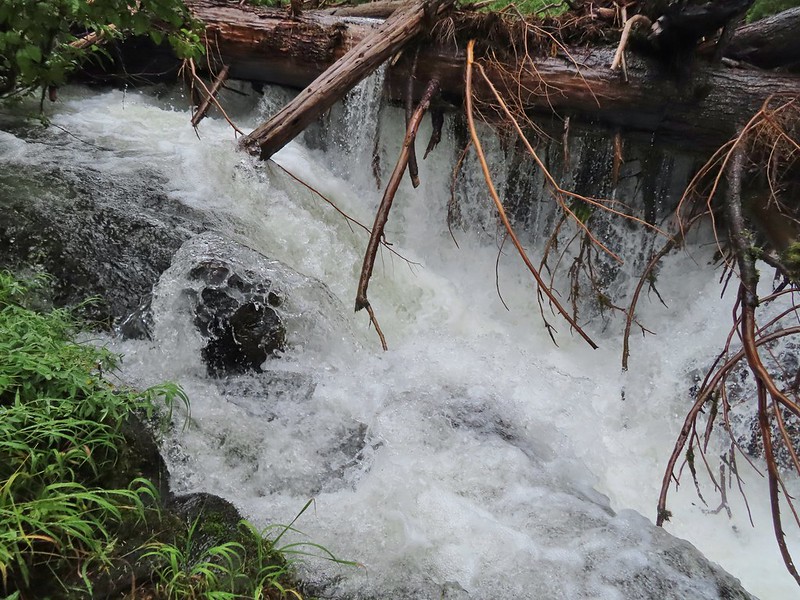 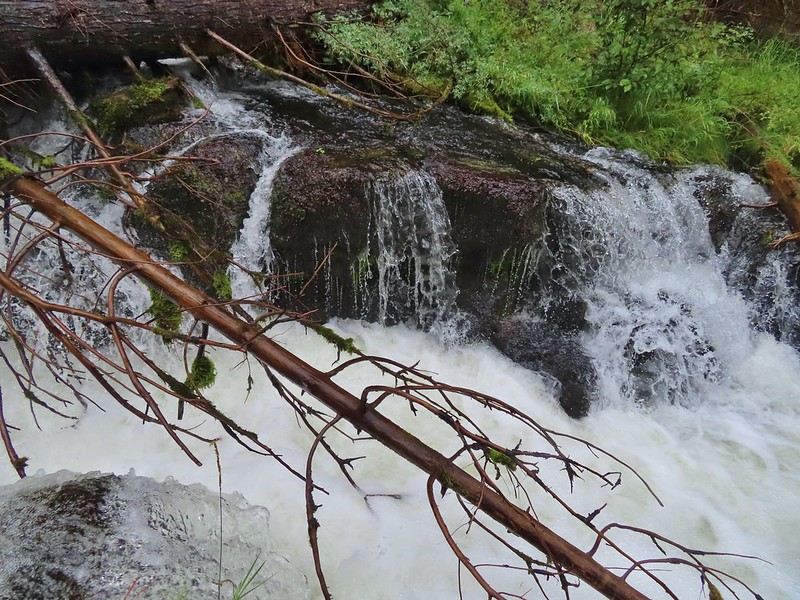 We returned to the car having come up a just over a quarter mile short of where I’d given up and turned around in 2020 resulting in a 3.7 mile hike with just over 400′ of elevation gain.

It is a shame that this trail doesn’t seem to warrant any attention from the Forest Service. The creek is beautiful and the trail isn’t that long so there isn’t that much to clear. It also isn’t in a wilderness area so they could use chainsaws where needed. Ironically this sign is posted at the trailhead along with a box that was full of spiderwebs. 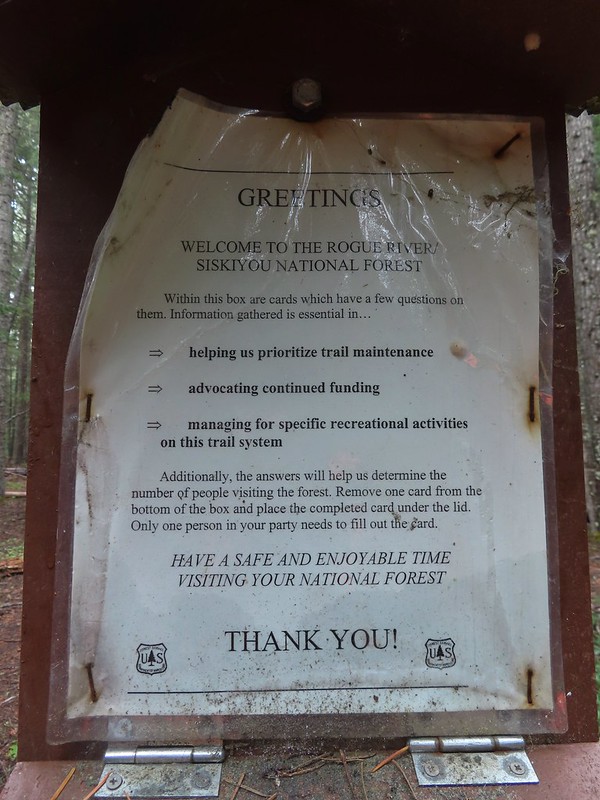 It was just after 9:15am when we got back to the car and after changing we did what any sane people would do and drove back into Union Creek to Beckie’s Cafe for breakfast, a cinnamon roll, and a blackberry pie to go. Happy Trails!

The Union Creek Trail was just barely passable when we forced our way through in 2018. Even then we looped back on OHV trails rather than bushwhack twice. From what you found, I doubt anyone has worked on in it in 5+ years. This is too bad as it’s not that long and would make a great connection between Beckie’s 🥧 and Union Creek Falls.

That was our thought too. The portion that is passable is really nice too. Probably the most confusing case of the FS seemingly abandoning a trail that we’ve encountered.

[…] least in part) so no day was an exact duplicate of one we’d done before. Union Creek Falls (post) was very close for me but I did manage to see one section of Union Creek that I hadn’t […]