The weather threw us a curve ball this last week. After enjoying a couple of weeks of summer like weather snow returned to some of the lower elevations. A fact we discovered on the way to our most recent hike. After seeing the amount of snow on the road to the Wildcat Mountain trail head we decided to alter our plans a bit and headed to the Columbia Gorge instead.

Despite the side trip we arrived at the Angel’s Rest trail head (Bridal Veil exit 28 off I-84) before 7:30am. There was only one car in the parking area which we knew would change by the time we hiked back out given the popularity of the Gorge trails. The weather was typical of our experience hiking in the area, low clouds and mild temps. The trail set off in a damp green forest and made it’s way on a steady climb up to Angel’s Rest, a rocky bluff overlooking the Columbia River. The trail was lined with flowers along the way, mostly larkspur and columbine but many different varieties were present. After passing Coopey Falls views begin to open of the Columbia River to the west especially as you reach a rock field crossing.

We were surprised by the width of Angel’s Rest when we arrived at the bluff. It was much wider than we had expected and we spent some time exploring around the area and because we arrived early we had it all to ourselves. 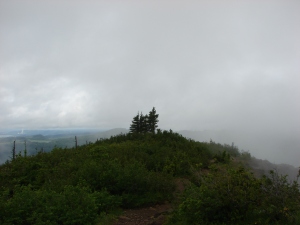 When we first arrived here we were in the midst of some very low clouds which obstructed our views but they eventually moved on allowing us to see across the river to Washington.

The round trip to Angel’s Rest is about 4.6 miles so we had planned on combining this hike with the Wahkeena Falls trail a couple of miles to the east via the Foxglove trail. This trail obviously doesn’t see much traffic and was fairly overgrown but usable. By the time we had completed this 1.3 mile segment we were pretty soaked from the damp leaves that we brushed against. We then continued on the Angel’s Rest trail passing pretty Wahkeena Spring to the junction with the Wahkeena trail.

The Wahkeena Trail followed Wahkeena creek down through the forest with a brief side trip to Fairy Falls. 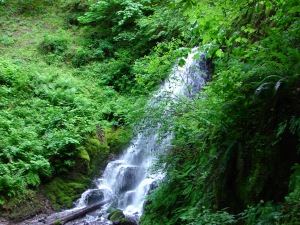 After passing below the falls the trail rejoins Wahkeena Creek crossing it twice before joining a paved path that switchbacks down to Wahkeena Falls.

The closer we got to the falls the more crowded the trail became but we eventually picked our way down to the double cascade of Wahkeena Falls. 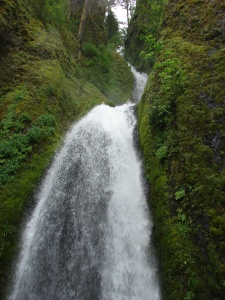 Next came the most dangerous portion of the hike, crossing the historic Columbia River Highway and the seemingly endless stream of cars creeping along trying to get a glimpse of the waterfalls along the way. After a successful game of Frogger and a brief pit stop we headed back up the Wahkeena Trail to begin the 6.7 mile trek back to our car.

By now the trails had become even more crowded but once we reached the junction we lost the crowds for awhile. The advantage of an early start was clear upon arriving back at Angel’s Rest. At least two dozen people, likely more were mulling around on the bluff that we had had to ourselves just 6 hours earlier. When we reached the now full parking area cars were lined along the shoulders of the highway and more were cruising around looking for a free spot. The gorge has some amazing waterfalls, beautiful forests and amazing views which explains the crowds. Our advice is to avoid the weekends, get there early, and don’t stop at the most popular spots. With a vast network of trails many of the real popular falls can be reached from less crowded trail heads if you’re willing to do a little extra hiking and really when is that such a bad thing :). Happy Trails ~