Ah the elusive view. One of my favorite rewards on a hike is reaching that spot where the view simply takes your breath away. It could be the sudden appearance of a giant snow covered mountain that looks so close that you could reach out and touch it or a wildflower meadow that seems to have been painted by the Creator himself or a panoramic view that is so immense that you can barely take it all in. We’re lucky enough to live in an area where there are plenty of places to hike where these types of views are possible. Possible but not guaranteed. We were reminded of that once again on our recent hike up Mount June.

There are a number of things that can end your chances to have the view you had hoped for. Hazy skies, forest fires, fog and clouds can all conspire against you. Unfortunately it was fog and clouds that proved our nemesis on Mount June. We had heard that the area is known for it’s fog but had also heard that often the rocky summit of Mount June rises above it to offer a view of a string of Cascade peaks. The forecast had called for a partly cloudy/mostly sunny morning with clear skies starting around 1:00pm.

We were the first to arrive at the trail head on this morning and were immediately struck by the darkness of the forest as soon as we stepped on the trail. Within a short distance we entered the fog which we had heard about. 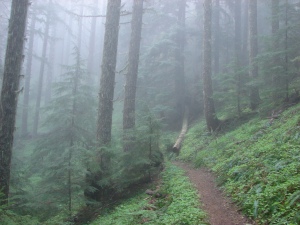 We noticed a number of the same Spring flowers we had seen over a month earlier at lower elevations blooming here now. Trillium, sourgrass, and wood violets add color to the forest along with a good number of fawn lilies. Once again we were too early for the rhododendron & beargrass displays even though these were in bloom along the road at the trail head.

It appeared to be raining most of the time we were in the forest but upon reaching a series of meadows near Sawtooth rock we realized it was not in fact raining. The fog was so damp that the condensation was falling from the trees creating the rainy affect. The meadows here were filled with wildflowers glistening with water droplets. The foggy conditions meant no views and even made it hard to make out large Sawtooth rock at the far end of the meadows. We skipped a short side trail to it’s base hoping that on our way back the skies might be clearer.

We continued on the Sawtooth trail toward Hardesty Mountain. Our plan was to make a short loop on it’s summit and visit the sight of a former lookout tower. As we reached our furthest point a hint of blue sky seemed to be just a little further to the North just out of our reach. We had a snack at the former lookout site and then completed the loop and headed back hoping that blue sky might be waiting for us on Mount June.

This time we took the trail to the base of Sawtooth rock where the conditions were slightly improved. Many birds were now flying around the meadows and we spotted one with some bright yellow coloring. It turned out to be a yellow-rumped warbler.

The fog had lifted some and there was even a short lived opening giving us a view of the forest below, but Mount June was still hidden in the clouds.

We took the .5 mile climb to Mount June’s rocky summit which was for some reason particularly tough on this day. I don’t know if it was due to it being toward the end of the hike or the cumulative effect of a week of hiking but it was a trudge. Much to our disappointment the we found the same clouds and fog on the summit as we had been in all day. We decided to have some lunch and hope that the sunny skies that had been forecast would materialize since it was just now 1:00pm. The clouds kept rolling past us and all we managed were a couple of very short glimpses of Mt. Bailey and the ghostly outline of Mt. Thielsen to the SE.

The view had eluded us once again, simply teasing us with a small brief sample of what could have been.

It was a good example of just why the elusive view is one of the most rewarding things for me on a hike. The mountains and forests don’t move but there is never a guarantee that they will be there to be seen. The view must be pursued and caught to be enjoyed.

After lunch we returned to the car where fluffy white clouds floated by in the blue sky. As we drove away there was no missing Mount June, it was the only peak with a cloud draped over it’s summit. We have many more hikes planned where we will have a chance to capture the elusive view, and after Mount June it will be even sweeter when we finally do. Happy Trails

A good read! Sorry the hike wasn’t all it could have been.

[…] The trail is actually the Hardesty Trail which gains over 3000′ in five miles to the old lookout site atop Hardesty Mountain. Unless you’re looking for a training hike the old lookout site is now view less. For a slightly shorter and more scenic hike to that location start at the Mount June Trailhead instead as we did in 2013 (post). […]