It’s July and that means mosquito season in the Cascades. We had our first real run in with the pests on our 4th of July hike at Salt Creek Falls. Through June I had seen only one mosquito which managed to get me on top of Salmon Butte. For the next month or so we will be faced with a dilemma, brave the hoards of bloodsuckers in order to see some of the best wildflower displays of the year, or play it safe and wait them out missing the best of the flowers.

We chose to brave the danger (annoyance at the very least) for this waterfall hike. At 286′ Salt Creek Falls is Oregon’s second tallest and is conviniently close to Hwy 58 making it easy to make a quick stop. We tend to avoid quick and easy but trails leading past Salt Creek Falls head up into the Diamond Peak Wilderness passing a couple of lakes and two additional waterfalls giving us a good excuse for a visit.

We were the first car in the parking lot and apparently the mosquitoes were waiting because I had one land on me almost immediately after I got out of the car. Luckily we had come prepared. We were all wearing long pants/sleeves and sported less than fashionable bug net hats. After a good dousing in DEET (a necessary evil) we headed down the short path to the Salt Creek Falls viewpoint. 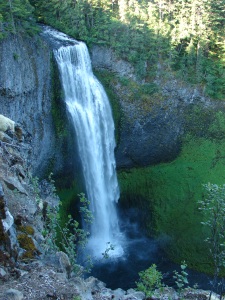 After viewing the falls we headed for the Vivian Lake which was 4 3/4mi away and our turnaround point. Shortly after crossing Salt Creek the trail split making a loop to Diamond Creek Falls possible. We headed right and soon came to Too Much Bear Lake. Despite the name we saw no sign of bears but the pretty lake was lined with blooming rhododendrons and reflecting the surrounding trees. 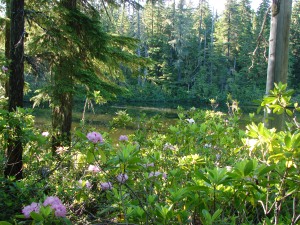 As we continued toward Diamond Creek Falls several signs announced viewpoints. Perhaps we had been spoiled by the views on our last few hikes, but the view from these viewpoints was a bit of a let down. Diamond Creek Falls on the other hand was lovely. A short side path led down into a narrow canyon and across Diamond Creek on a footbridge. Not long after the crossing Diamond Creek Falls came into view through the trees. It was an impressively sized 100′ cascade that fanned out over the rocks as it fell into a cozy grotto. 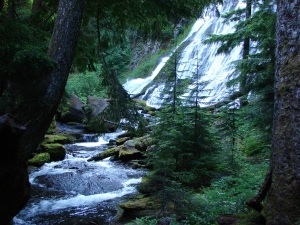 We returned to the main trail and continued past an upper viewpoint of Diamond Creek Falls to a second fork in the trail. The left fork would take us back to the parking area while the right continued on toward the wilderness and Vivian Lake. Before we made it to the wilderness we crossed Diamond Creek on a road bridge and passed over the Southern Pacific Railroad tracks. When we reached the sign board announcing the start of the Diamond Peak Wilderness we found that there were no self-serve entry permits left in the box, but there were plenty of mosquitoes buzzing around. The forest was full of white flowers, bunchberry, anemone, and queens-cup with an occasional beargrass thrown in. Many of the rhododendron were in bloom as well. The trail followed Fall Creek up to a viewpoint of Fall Creek Falls, a smaller 40′ cascade lined at the top with pink rhododendron blooms. The viewpoint proved a good place for a brief rest as it was an exposed rocky outcrop and almost devoid of mosquitoes.

Another mile of climbing brought us to Vivian Lake but before we would reach the lake shore we had to cross a “meadow”. The meadow was still quite damp from recent snow melt but we did our best to stay on the driest part of the trail. Shooting star and heather blooms dotted the green meadow while frogs hopped toward the water where they joined tadpoles that had not yet emerged. Unfortunately it was also a perfect spot for mosquitoes and a large number of them swarmed the air just waiting for us to stop so we quickly made our way across to drier ground and followed the trail to the shore of Vivian Lake. We worked our way around the shore until we got a good view of the top of Mt. Yoran which reflected in the water. This would have been a wonderful spot for lunch if we hadn’t been on the menu. We stayed long enough to snap a couple pictures then headed back to the viewpoint above Fall Creek Falls where we had a better chance of a mosquito free lunch. 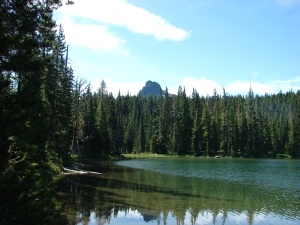 We made great time on the way back to the car as we tried to stave off the skeeters but we did stop when we spotted a golden mantled squirrel and later a cascade frog. We saw only one other hiker on the trail but the parking area was full of people and cars when we got back. Heather got the worst of the bites but still only about a half dozen, Dominique had a couple and I miraculously escaped with only one. Hopefully our next few hikes will have less mosquito activity, but we’ll be ready for the little buggers if need be. Happy Trails

[…] It was only another .6 miles back to the Yoran Lake Trail and .7 more back to our car. On our way home we made a pit stop at Salt Creek Falls, the previous hike we’d taken in the Diamond Peak Wilderness. https://wanderingyuncks.wordpress.com/2013/07/07/salt-creek-falls/ […]

[…] After two miles on the Diamond Peak Tie Trail we arrived at the Vivian Lake Trail. We had been on the other end of this trail when we visited Vivian Lake in 2013 (post). […]