Greetings, we recently made our first visit of the year to Mt. Hood. We had taken a handful of trips to the west side of the mountain last year and had fallen in love with it. So for this hike we decided to check out the east flank of Oregon’s tallest mountain. The plan was to travel a big loop around the area to hit as many sights as possible. Starting at the Elk Meadows trail head just off highway 35 near the Mt. Hood Meadows ski area the plan was to hike around the far end of the meadow, head up Gnarl Ridge for an up close view, then take the Timberline Trail through Mt. Hood Meadows, and return to the car via the Umbrella Falls trail to visit two waterfalls along the East Fork Hood River. Total planned distance was 15.2 miles (which I verified using two different maps).

We set off on the Elk Meadows and soon reached the boundary of the Mt. Hood Wilderness at Clark Creek. After crossing the creek (and into the wilderness) another .6 miles brought us to Newton Creek and a nice view of Mt. Hood.

We crossed the creek on a makeshift bridge and began climbing up towards Elk Meadows. Purple lupine began lining the trail as we approached the meadows and soon we could see the open green expanse through the trees ahead. Our arrival was ill timed as it was early on a weekend morning so many backpackers were camped around the perimeter. We did our best to avoid disturbing the campers and skipped a visit to the old shelter, but we still managed to get some good views.

We veered off the perimeter trail and took the Gnarl Ridge trail up toward the mountain. After a mile or so we reached the junction with the Timberline Trail on its way around Mt. Hood. We continued on the Timberline Trail through ever better wildflower meadows as we gained elevation. This portion of the trail winds around Lamberson Butte which kept Mt. Hood hidden for awhile. As we worked our way around the butte we spotted Mt. Adams and the very top of Mt. Rainier away to the north. Eventually forest began to give way to sand and rocks as we approached the Gnarl Ridge viewpoint. Dwarf lupine and buckwheat dotted the drier ground able to survive in the exposed dry climate. Mt. Hood now loomed before us while the Newton Creek Canyon replaced Lamberson Butte on our left. Behind us to the south snowy Mt. Jefferson was joined by the Three Sisters and Broken Top in Central Oregon. To the SE there appeared to be a fire which it turned out was in fact a forest fire on the Warm Springs Indian Reservation. 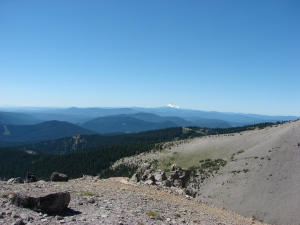 We had been informed by a fellow hiker we’d run into earlier that there were a couple of waterfalls coming off of snow melting higher up on the mountain, but we couldn’t see them from where we’d stopped. We decided to split up and see if we could get a view so Heather headed further up the ridge while I turned around and scrambled up Lamberson Butte. From the butte I was able to see the falls, the higher of the two seemed to be flowing straight out of the rocks and sand. 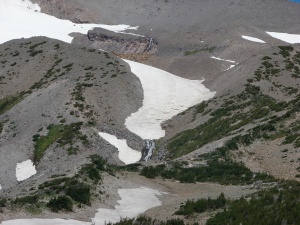 I could barely make out Heather up on the ridge and decided to go see if she had a closer view from where she was. She didn’t, but she did find a great overlook of Newton Creek as it flowed down through the canyon.

Having found the waterfalls we headed back down the Timberline Trail and headed down into the Newton Creek Canyon. On the way down we ran into Ken, the hiker who had told us about the waterfalls, on his way back up the trail. He had been down to the creek but was uncertain of the correct place to cross and hadn’t been able to spot the continuation of the trail on the opposite side of the creek. I had seen trail reports on Portlandhikers.org from hikers that had made the crossing in the previous couple of weeks so I knew there was one, and between my maps and GPS unit felt confident we could find it. Ken decided to join us and followed us back down to the creek. We wound up using the map, GPS, and binoculars but in the end found two good crossings and Ken quickly spotted the flagging marking the continuation of the trail.

At the top of the canyon Ken turned down the Newton Creek Trail to complete his planned loop and we continued clockwise around the mountain on the Timberline Trail.

When we reached the Clark Creek canyon the gray sandy ground began to give way to more plants and flowers. We could see down to Heather Creek as it flowed through the canyon on its way to join Clark Creek. The lush valley below was a stark contrast to the bare ridges beyond as Heather Creek flowed down the middle in a series of picturesque waterfalls. 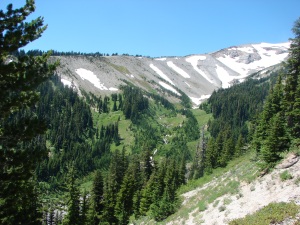 We crossed the creek just above a nice waterfall surrounded by beautiful wildflowers. It was certainly one of the prettiest places we’ve been.

When we gained the canyon ridge we came to the Mt. Hood Meadows. The ski lifts sat idle and the ski runs were replaced with green slopes decorated with wildflowers. As we passed through the meadows we noticed that each one seemed to have a slightly different mix of flowers often with Mt. Hood towering above. One would be cat’s ear lilies and lupine, another beargrass and paintbrush, and yet another of western pasque flowers and paintbrush. This was a treat for Dominique since his favorite flower is the paintbrush but he also enjoys the “Hippies on a stick”.

After a little over three miles since saying goodbye to Ken we reached the Umbrella Falls Trail. In 3.5 miles we would be back at our car but first we had some waterfalls to visit. Up first was Umbrella Falls, the trails namesake. We crossed the East Fork Hood River just below this fall which was rather scenic. 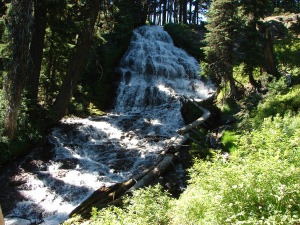 Normally we would have stuck around for awhile and enjoyed a snack while taking in the falls, but after the unplanned scramble up Lamberson Butte and extra climb up the Timberline Trail it was getting late and we were all pretty tired. We continued on to a sign for Sahalie Falls which was down in a narrow canyon. The trail down was steep and after surveying it I went down alone. This was another nice waterfall and the breeze created by it felt wonderful. After climbing back out of the canyon we completed the final .5mi leg of our loop and arrived at the trail head.

Once again Mt. Hood had delivered a spectacular hike. In addition to the mountain views, wildflowers, and waterfalls we saw dozens of butterflies and a pair of Western Tanagers. We have three more hikes planned around Mt. Hood this year and can’t wait to see what else the mountain has to offer. Happy Trails.

One reply on “Elk Meadows”

[…] us found to be their favorite hike and the most difficult. For myself Elk Meadows was my favorite. https://wanderingyuncks.wordpress.com/2013/07/24/elk-meadows/ The variety and beauty we encountered on that hike put it atop my list. As for the most difficult I […]