We recently wrapped up our 2013 hikes. We started on the Oregon Coast at Cape Perpetua in February and ended 140 miles to the north at Tillamook Head. Undaunted by some recent snow and cold weather (lows in the teens) we were determined to complete our final scheduled hike. The forecast for Seaside was for clear skies and a balmy 36 degrees and highway 26 over the coast looked passable so we bundled up and set off. We were looking forward to the possibility of seeing some snow at the coast since it is a rarity here in Oregon.

We chose to begin our hike at Ecola State Park on the Cannon Beach side of Tillamook Head. This meant paying a $5 fee to park which we could have avoided by parking at the Seaside end, but better views and a less steep start to the hike were worth the expense. We were the lone car in the large picnic parking area at 8am and had the views all to ourselves.

From the picnic area we headed north toward Indian Beach stopping occasionally to take in the views of Sea Lion Rock and the old lighthouse on Tillamook Rock.

When we arrived at Indian Beach we found some very interesting ice formation in addition to the superb views. 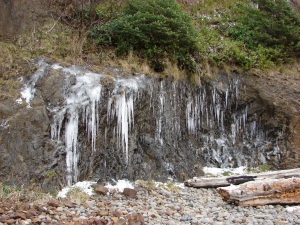 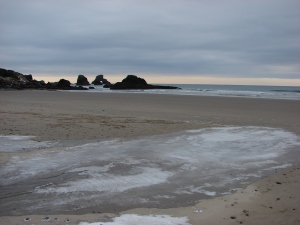 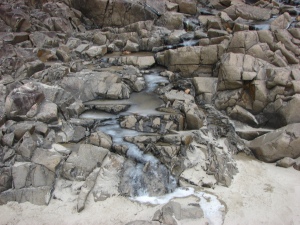 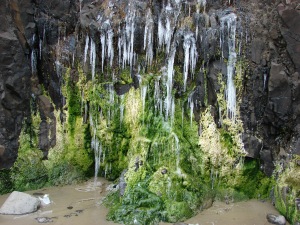 In addition to the ice there were a couple of small tide pools to check out. 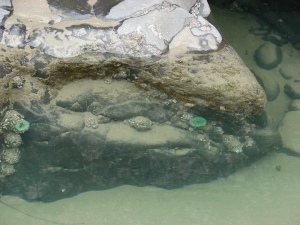 From Indian Beach we continued north taking the Clatsop Loop Trail, part of which William Clark traveled in 1806 with a party in search of a stranded whale. The forest here is still home to some of the same Sitka Spruce trees that he and his group passed by which was a neat thing to think about. The loop trail turns back at Hikers Camp where you can visit the nearby remains of a WWII radar installation.

We kept heading north from Hikers Camp heading toward the summit of Tillamook Head, a whopping 1130′ above sea level :). We passed over the summit and went just a bit further until the trail began to really descend toward Seaside. We decided we didn’t want to have to climb all the way back up so we called it good and head back to Hikers Camp to complete the loop trail. It had started to snow, more like small white pellets, and the clear skies promised by the weather.com had never materialized. We passed more ocean views and various types of vegetation as we headed back to Indian Beach. 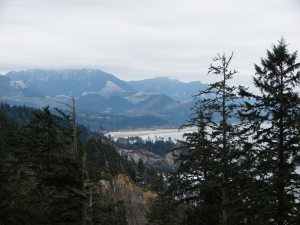 We had only seen one other group of people so far and that was a family that came down to Indian Beach briefly when we were there, but upon arriving back at the beach we discovered it had been populated by some brave surfers. 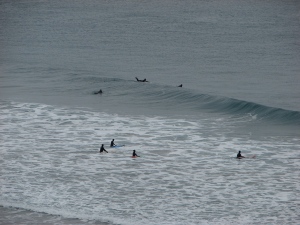 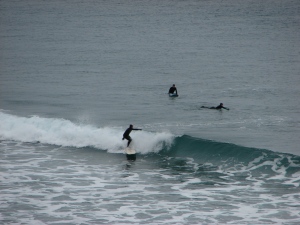 It wasn’t until we had left Indian Beach and were almost back to the picnic area though before we ran into any traffic on the trail. 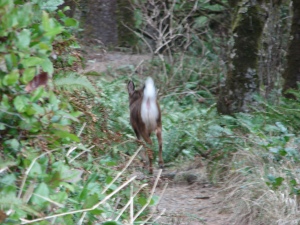 She was moving too fast for the camera but it was fun to watch her come up the hillside and then dash off into the forest.

The number of cars in the parking lot had swollen to three (including ours) when we got back to the picnic area at about 3pm. Despite the completely incorrect weather forecast it had been a great hike and a perfect way to end for 2013. Happy Trails! 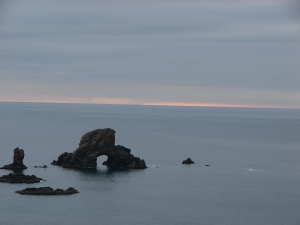 […] We still arrived a little early at our hotel but luckily our room was ready. We had a nice view south to Tillamook Head. […]