Happy New Year! A favorable weather forecast encouraged us to kick off our 2014 hiking year a bit sooner than planned. Just as we had done last year we turned to the Oregon Coast to get things started. While most of the country was dealing with frigid temperatures we were off to Oswald West State Park where a Sun filled day and 50 degree temperatures awaited.

For Heather and I this was our second visit to the park. In June 2012 we hiked out and around Cape Falcon where wild flowers and dramatic views were plentiful. (Pictures from that hike can be seen here: http://www.flickr.com/photos/9319235@N02/sets/72157632953462404/ ) For this trip we were set to explore the southern end of the park and follow the Oregon Coast Trail (OCT) up to the summit of 1631′ Neahkahnie Mountain.
Neahkahnie Mountain from Cape Falcon in 2012 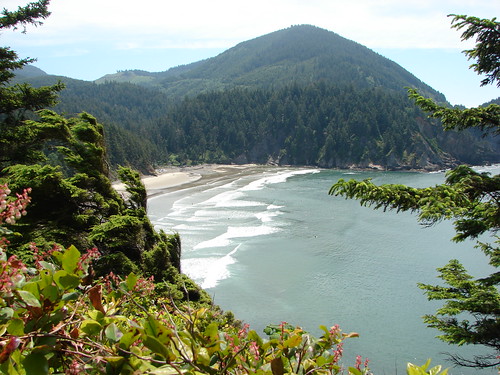 We parked in the large beach access parking area on the east side of Highway 101 where the Short Sand Beach trail begins. This was the same trail we had started on for our previous visit, but after a couple of hundred yards we turned left onto the Old Growth trail. Two tenths of a mile on that trail brought us to a trail junction with restrooms where we forked left on the .1 mile Cedar Crossing trail. This path ended at Necarney Creek where it intersected the .3 mile Necarney Creek trail. (As you can tell there are a lot of short trails in the area.)

At the Necarney Creek trail we had an option. According to the park brochure/trail map if we turned left we would find the .4 mile Necarney Falls trail. I had read a trip report from 2012 that indicated there was some bushwhacking involved in reaching the waterfall but the trail was still shown on the online map so left we went. Soon the Necarney Creek trail bent away from the creek which was where we had expected to find the falls trail, but there were no trail signs and we quickly reached the end of the creek trail at a small parking area. After re checking the park map and verifying the location of the supposed trail we returned to the bend to see if we could find it. There was a faint unmarked path leading toward the creek into the underbrush at the bend which we decided must have been what was left of the trail. It was less than .5 miles to the falls so we decided to make an attempt at reaching them and headed into the brush.

The former trail was virtually gone save for a few short sections here and there. We kept as close to the creek as possible as we made our way under the highway and up the narrow canyon. There were several slides and plenty of downed trees to pick our way around. After crossing a small side stream the canyon narrowed even more and we were forced down to the creek bed. Luckily the water level was low enough that we were able to stay dry by rock hopping until we reached Necarney Falls. The reward was worth the efforts. 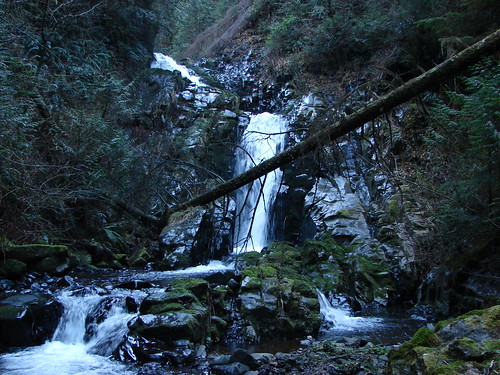 We retraced our steps (as best as we could) and returned to the maintained trails where we followed the Necarney Creek trail to a foot bridge which crossed the creek and led to the Elk Flats trail. 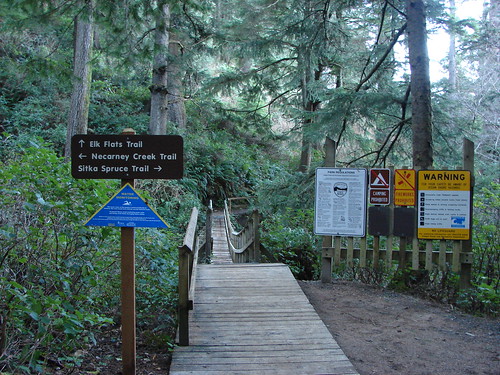 We took a quick trip down to Short Sand Beach before for a photo-op before setting off on the Elk Flats trail. 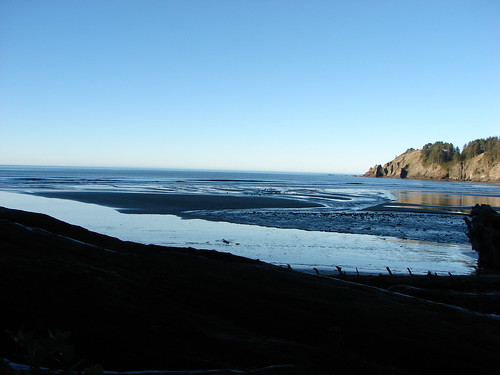 We then followed the 1.3 mile Elk Flats trail through the park passing several nice ocean views before entering a meadow near the Devils Cauldron overlook. 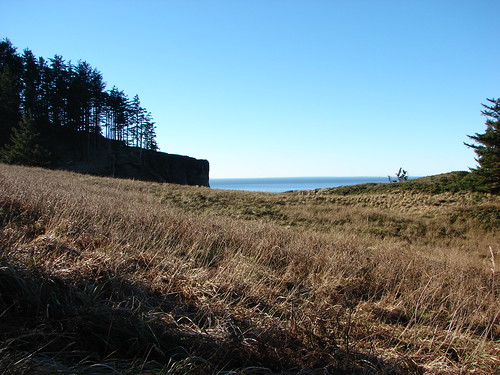 After taking in the view from the overlook we climbed east through the meadow to yet another small parking area along Hwy 101. Across the highway was the North Neahkahnie Mountain trail. Both the Neahkahnie Mountain and Elk Flats trail are part of the OCT which extends 360 miles from the Washington border to California. Less than 100 miles of the OCT are actual trail though, with the majority of rest of the miles being on beaches and the remainder on the shoulder of Highway 101.

After crossing the highway we quickly began climbing, needing to gain 1200′ in 2 miles of trail. The first section of the trail led up through an open meadow via a series of switchbacks. We guessed the meadow would be full of flowers in Spring and early Summer, but for this hike we were content with the views which extended from Cape Falcon in the north to Cape Mears and Cape Lookout to the south.
Looking up the meadow: 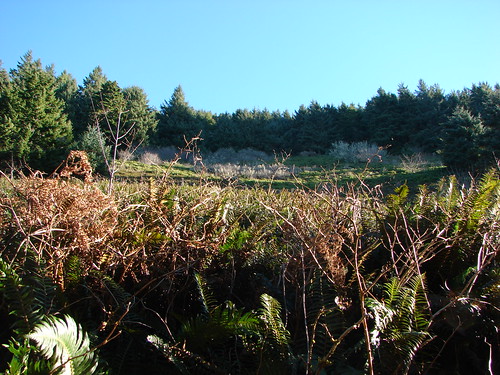 Cape Falcon from the meadow: 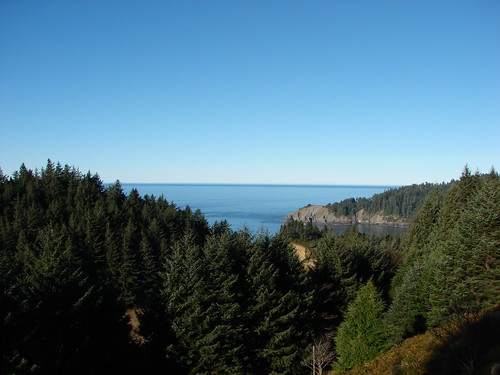 At the top of the meadow the trail entered an old growth forest where it remained until we were just below the rocky summit. The view from the summit was excellent and the clear skies and lack of a significant breeze made it a perfect spot for lunch.
Entering the forest: 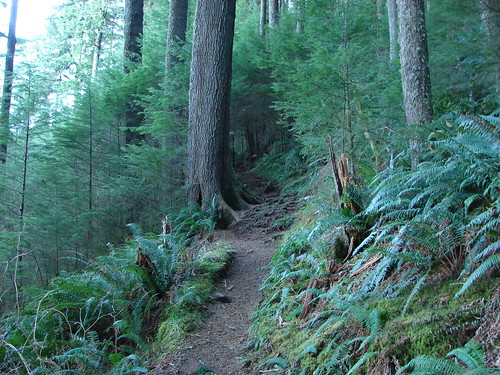 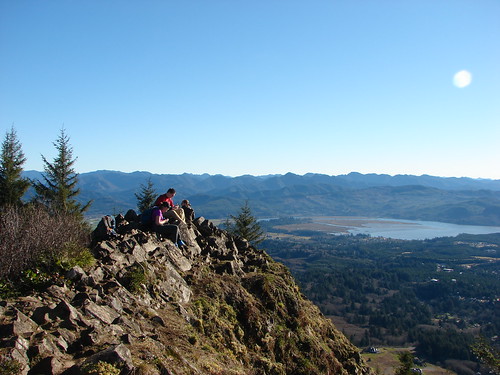 After lunch we returned they way we had come (minus the side trip to Necarney Falls 🙂 ). We decided to make one final stop though before leaving the coast. Dominique had not been with us in October when we hiked at Cape Kiwanda in Pacific City, so he had not had the experience of dining at the Pelican Pub. This was as close as our hiking schedule would bring us to Pacific City this year so we took a short detour and stopped in for an early dinner. The food was a good as we’d remembered and we were fortunate enough to be there as the Sun set over the Pacific which was a perfect way to end the first hike of the new year. Happy Trails!

[…] view from the beach was a good one with some of our previous destinations visible to the north. Neahaknie Mountain, Angora Peak, and Cape […]