This is the third straight year we’ve had French Pete Creek on our schedule. Each of the previous years it has wound up getting bumped for one reason or another. This year was different although it had been pushed back several weeks due to the early wildflower bloom in the Columbia Gorge. A cloudy forecast made for a good day to take a hike through an old growth forest along a wilderness stream. With that in mind we headed to the French Pete trail 3311 in the Three Sisters Wilderness. Our goal was a 5 mile marker mentioned in William L. Sullivans “100 Hikes in the Central Oregon Cascades”. The trail starts at the French Pete Trailhead which is located across from the French Pete Campground a mile beyond Cougar Reservoir on Road 19. Road 19 or Aufderheide Rd runs between the McKenzie Hwy 126 and Hwy 58 near Oakridge. 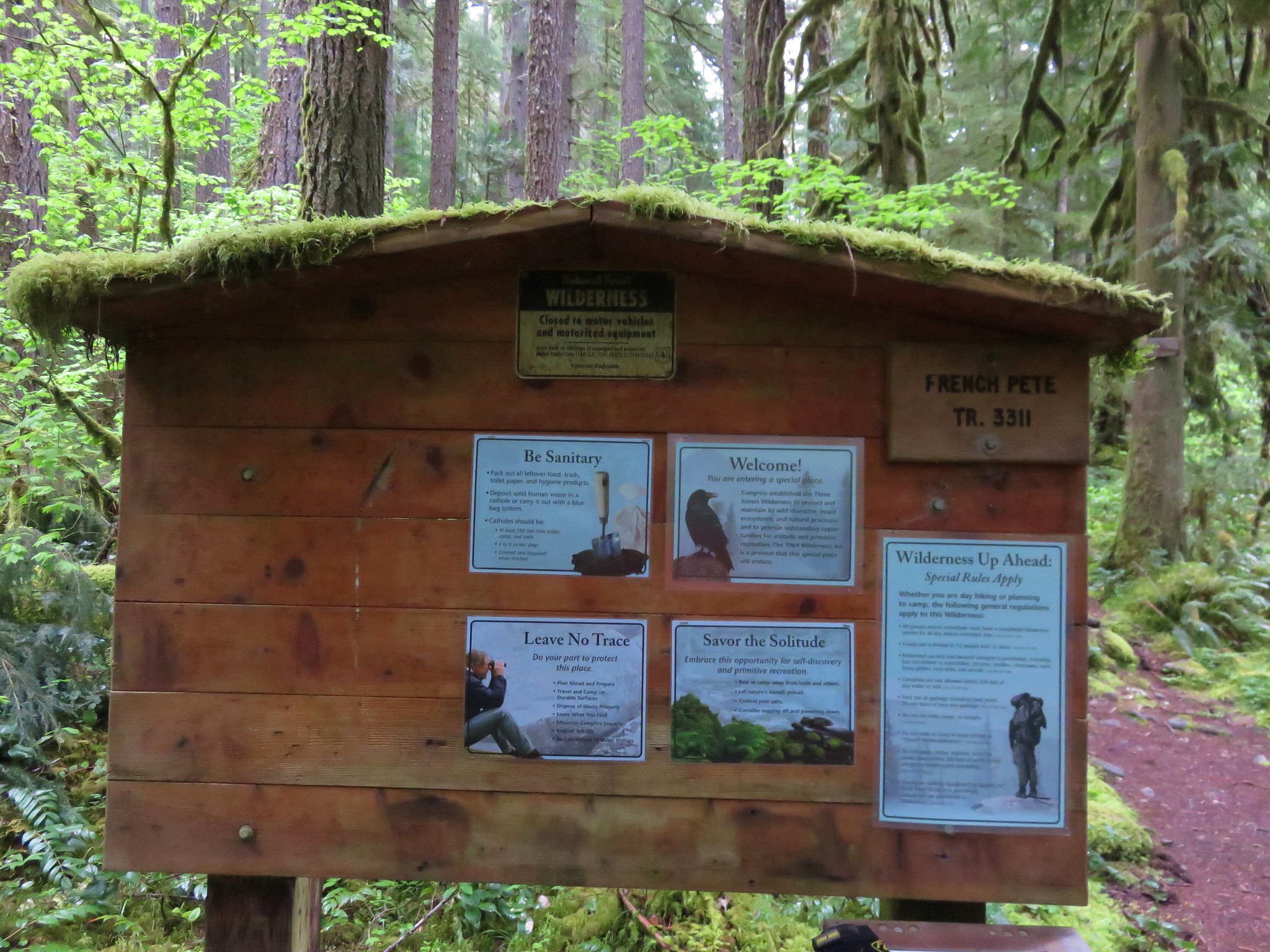 The trail promptly enters the Three Sisters Wilderness passing through nice old growth and several access points to the creek. 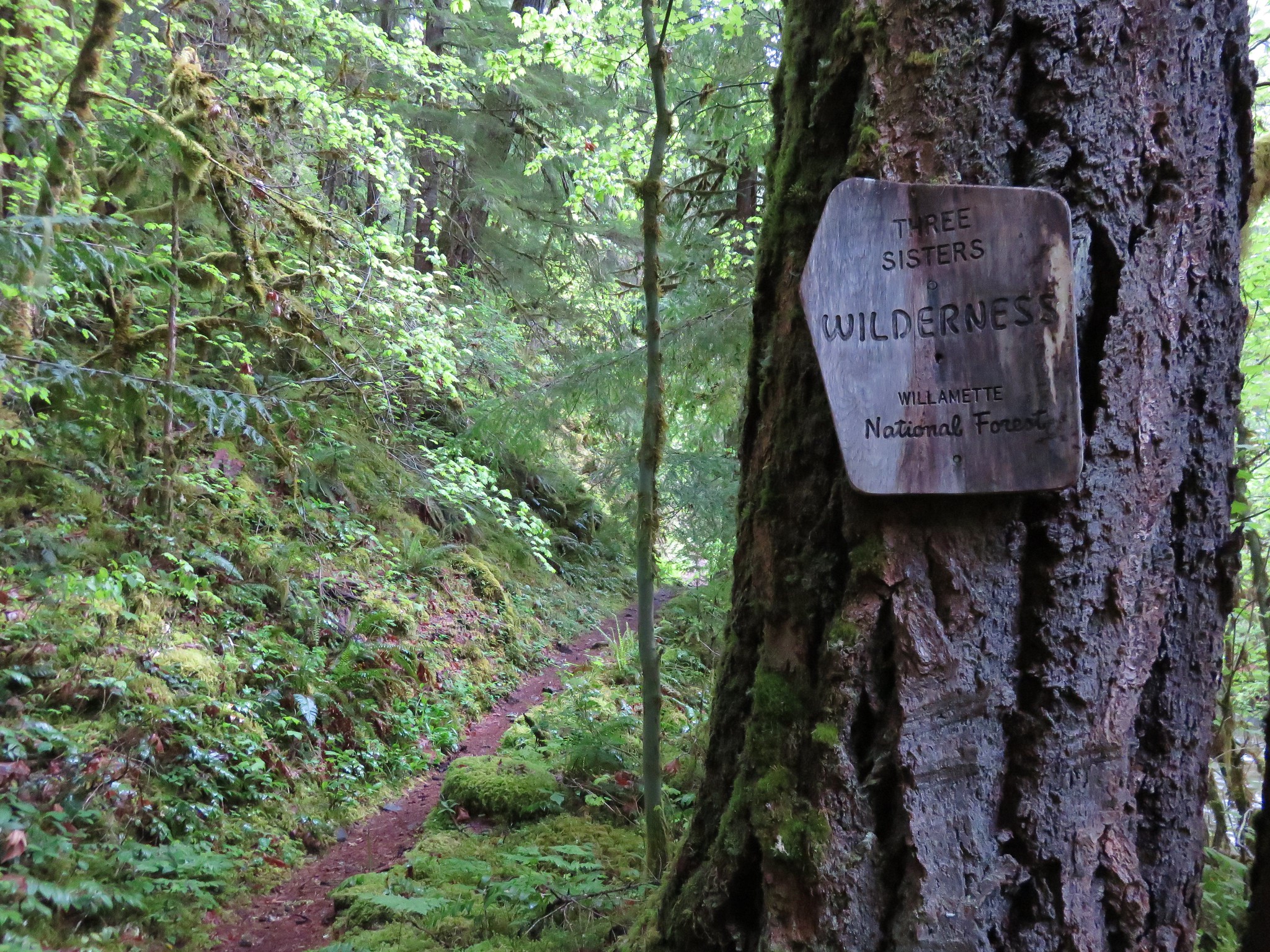 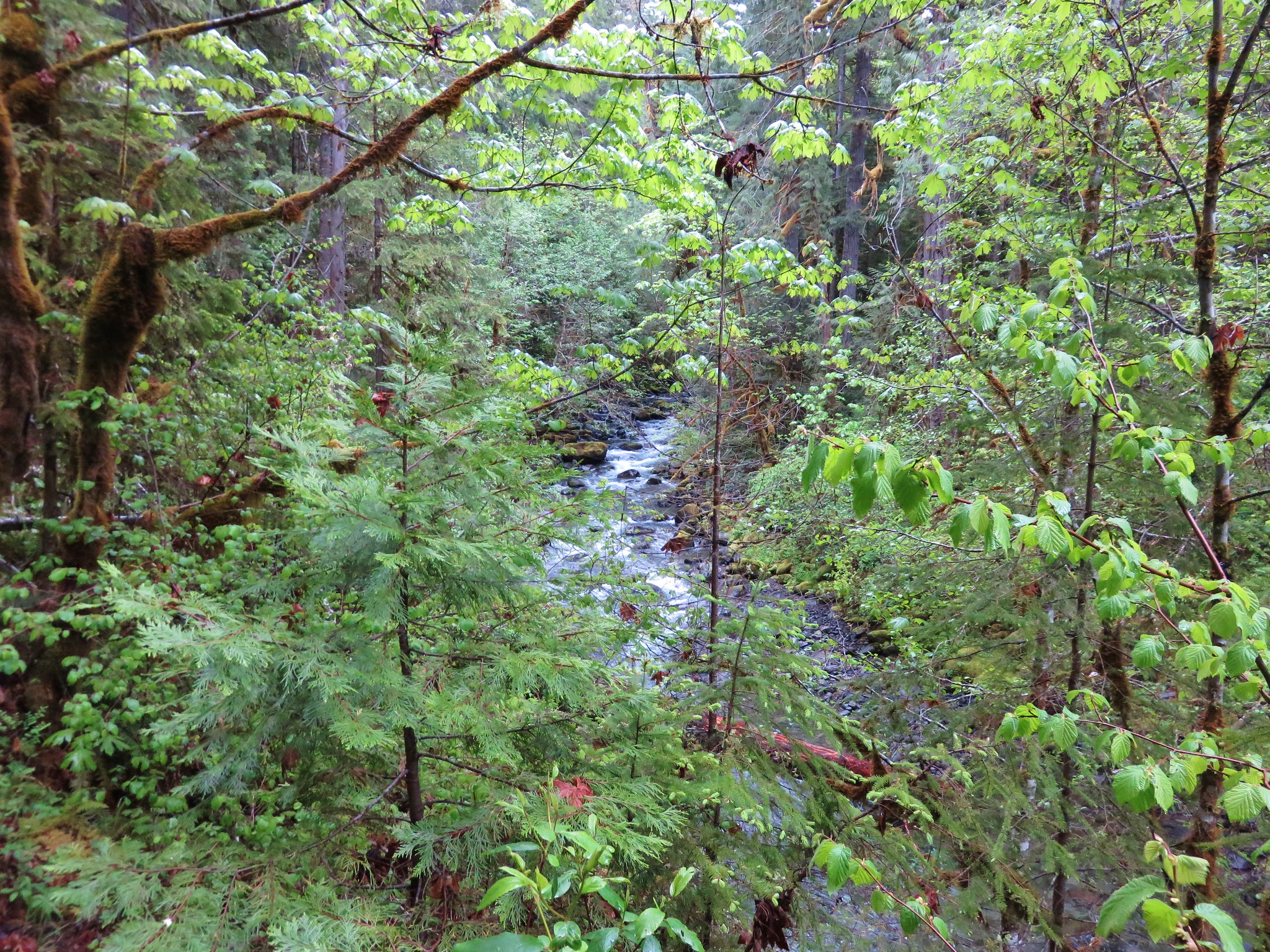 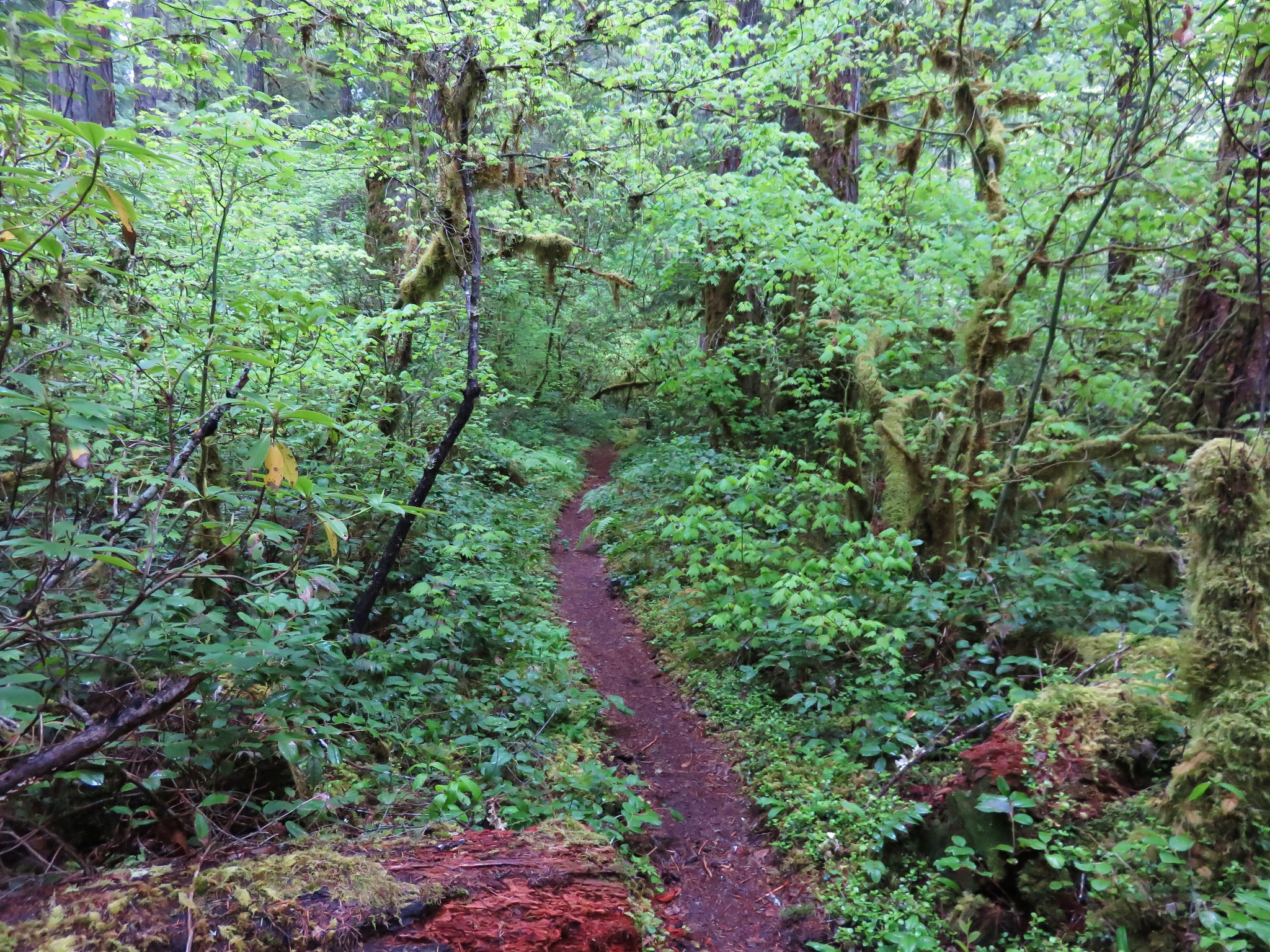 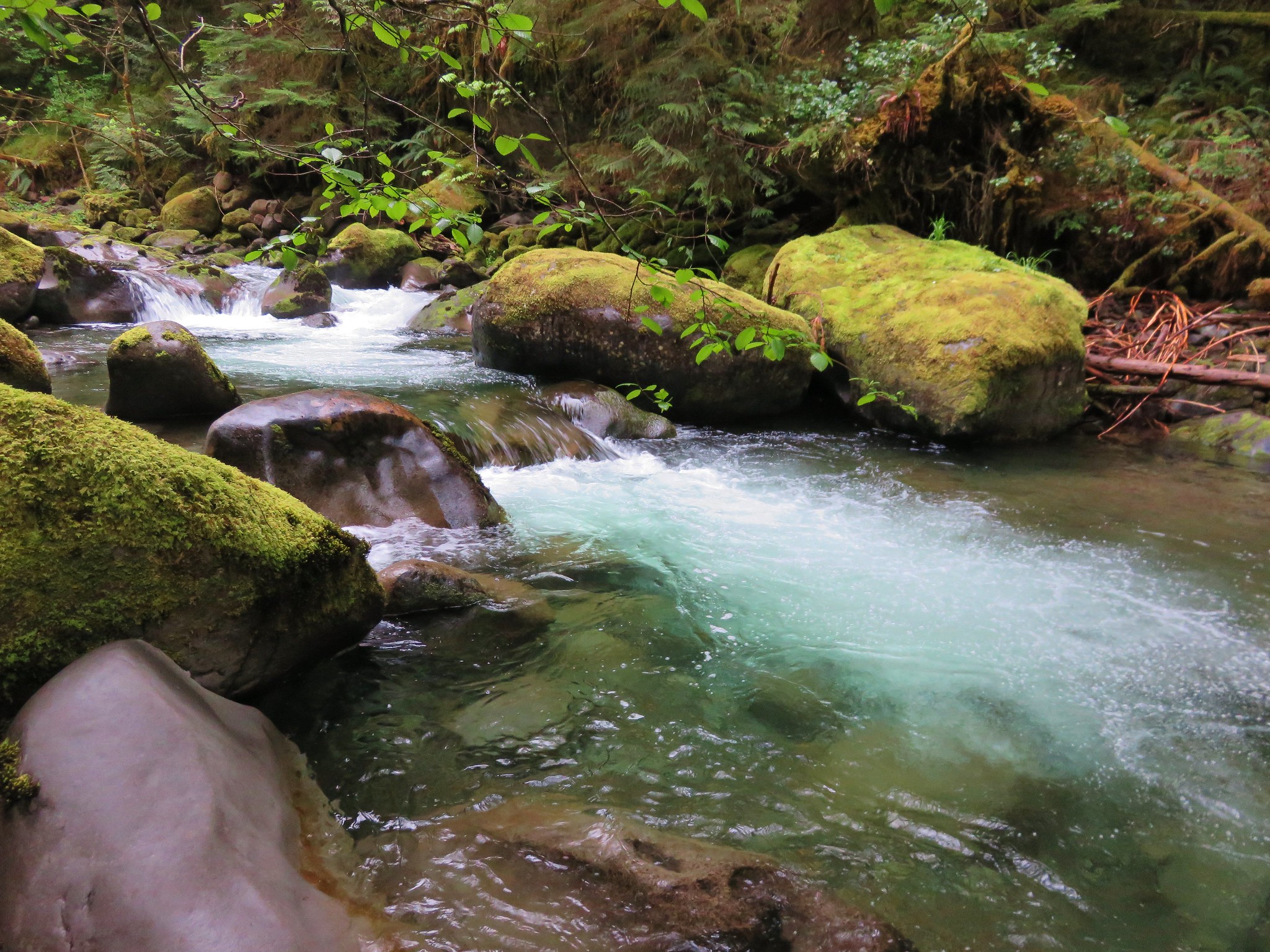 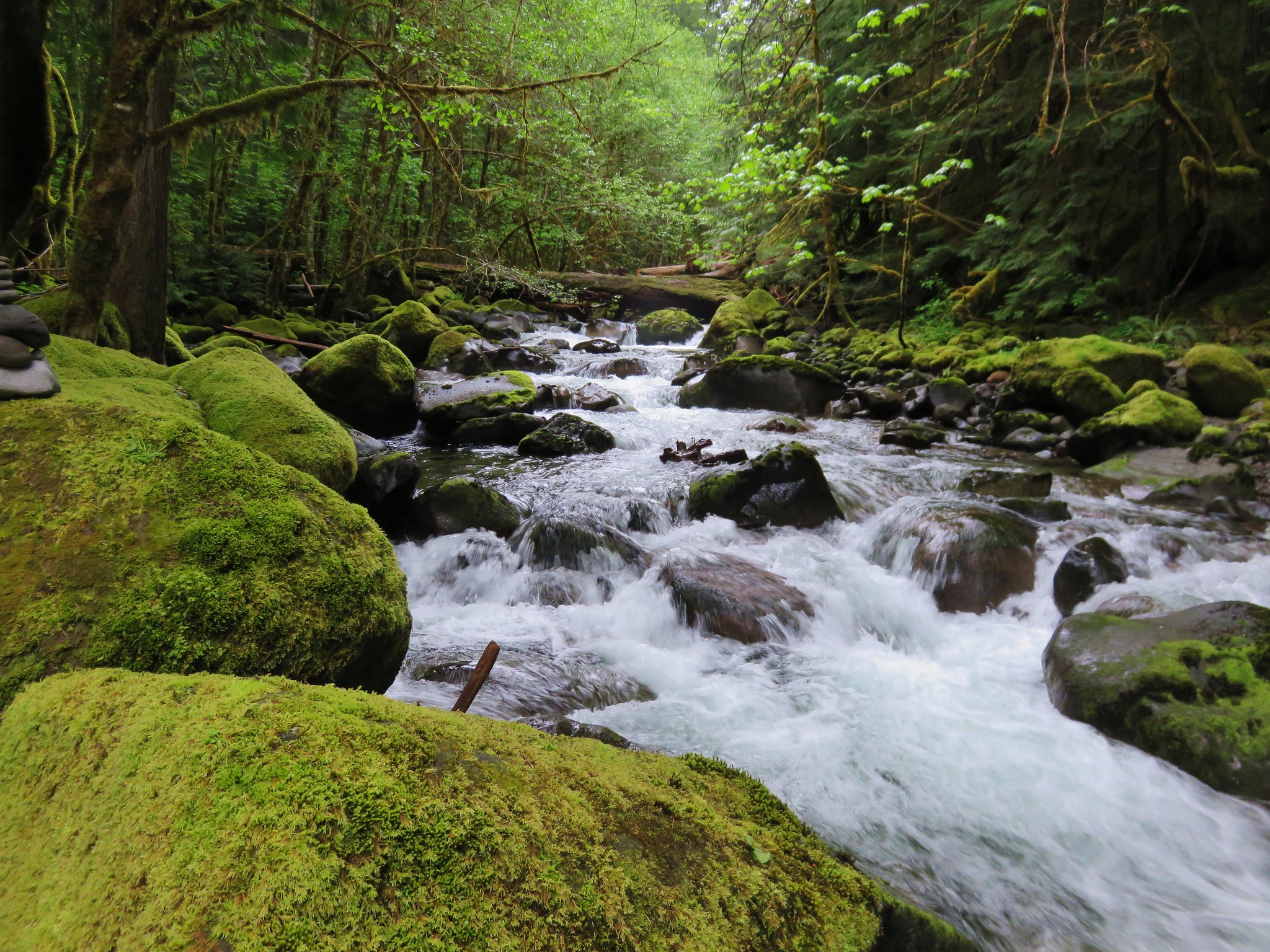 After 1.8 miles of some up and down trail we arrived at the first of two creek crossings. There had been a bridge here years ago but now if you want to continue on you either ford the creek or attempt to cross on a log jam just downstream. We inspected the log jam but given the wet weather the logs were rather slick and we decided that it wasn’t going to be the best option on this day. 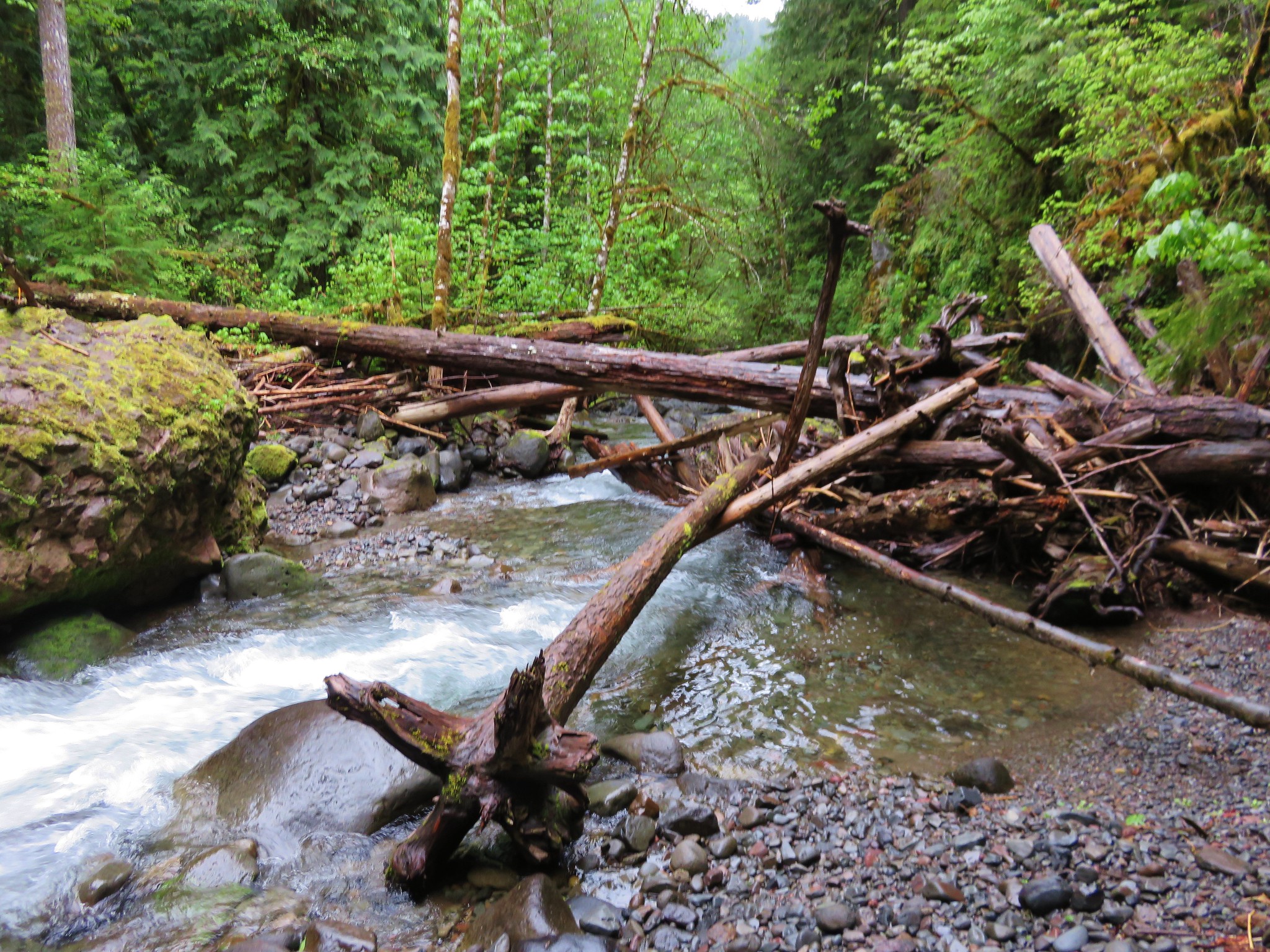 There was a possible third option to the ford or log jam, a rough 1.2 mile scramble trail along the north side of the creek. Where the trail turned down toward the creek there was a faint trail leading further along the creek so we decided to try that option versus the ford. 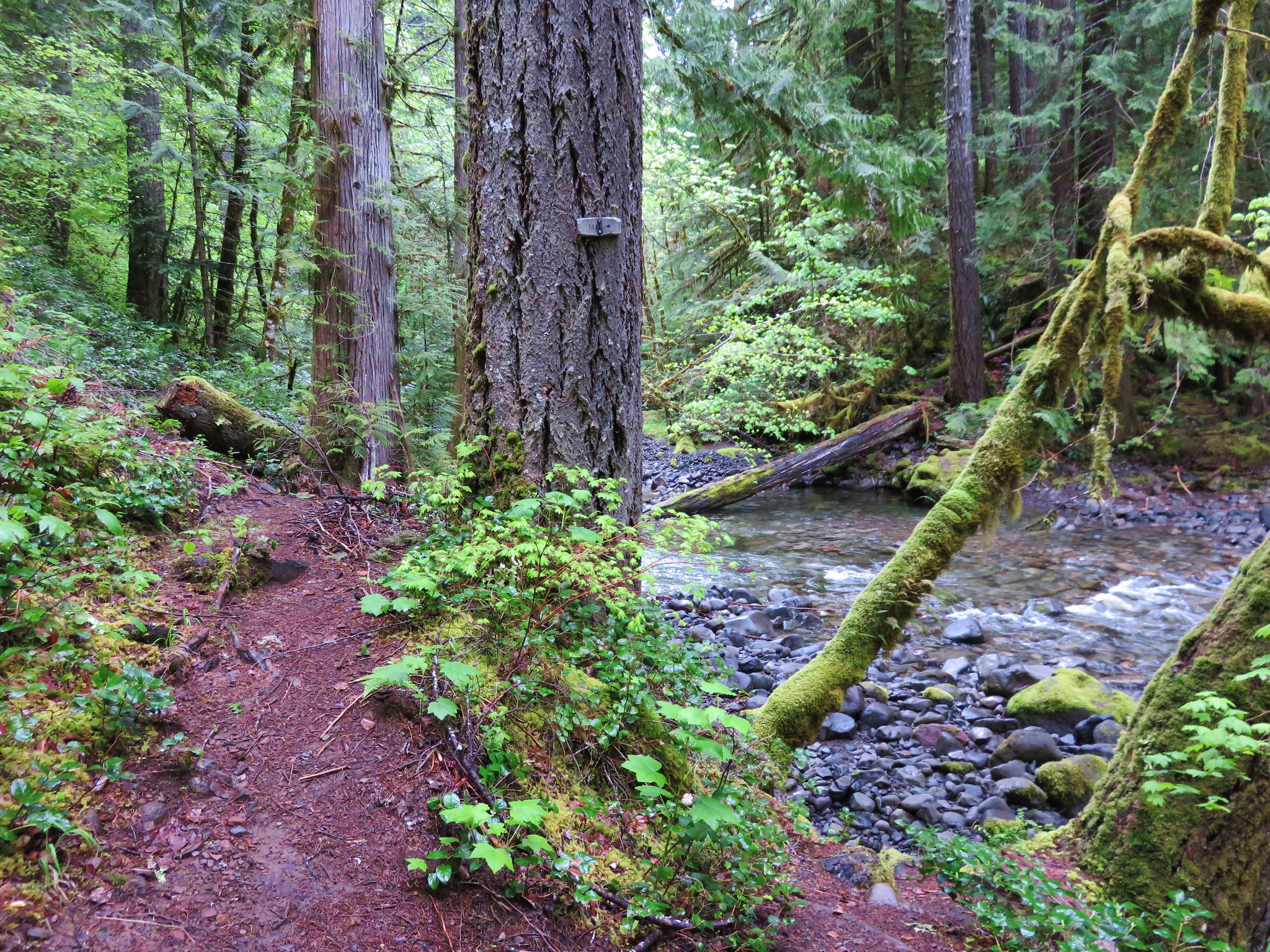 This path is not mentioned in the most recent edition of Sullivans book and we soon discovered why. We do not recommend attempting this route. The tread was very narrow with some blowdown and a few sketchy spots then after about .4 miles we came to the spot of a slide about 15′ above the creek. The path (and I use that term lightly) dove down the slide to the creek bank. I made it down but when I turned around I could tell Heather was not going to be able to do the same. I managed to get back up to where she had gotten stuck and helped her do a controlled slide in the dirt/mud down to a log where she was able to brace her self and continue on down to the bank. We knew we wouldn’t be going back that way so we sallied forth to the next big obstacle – a slanted rock shelf traverse. 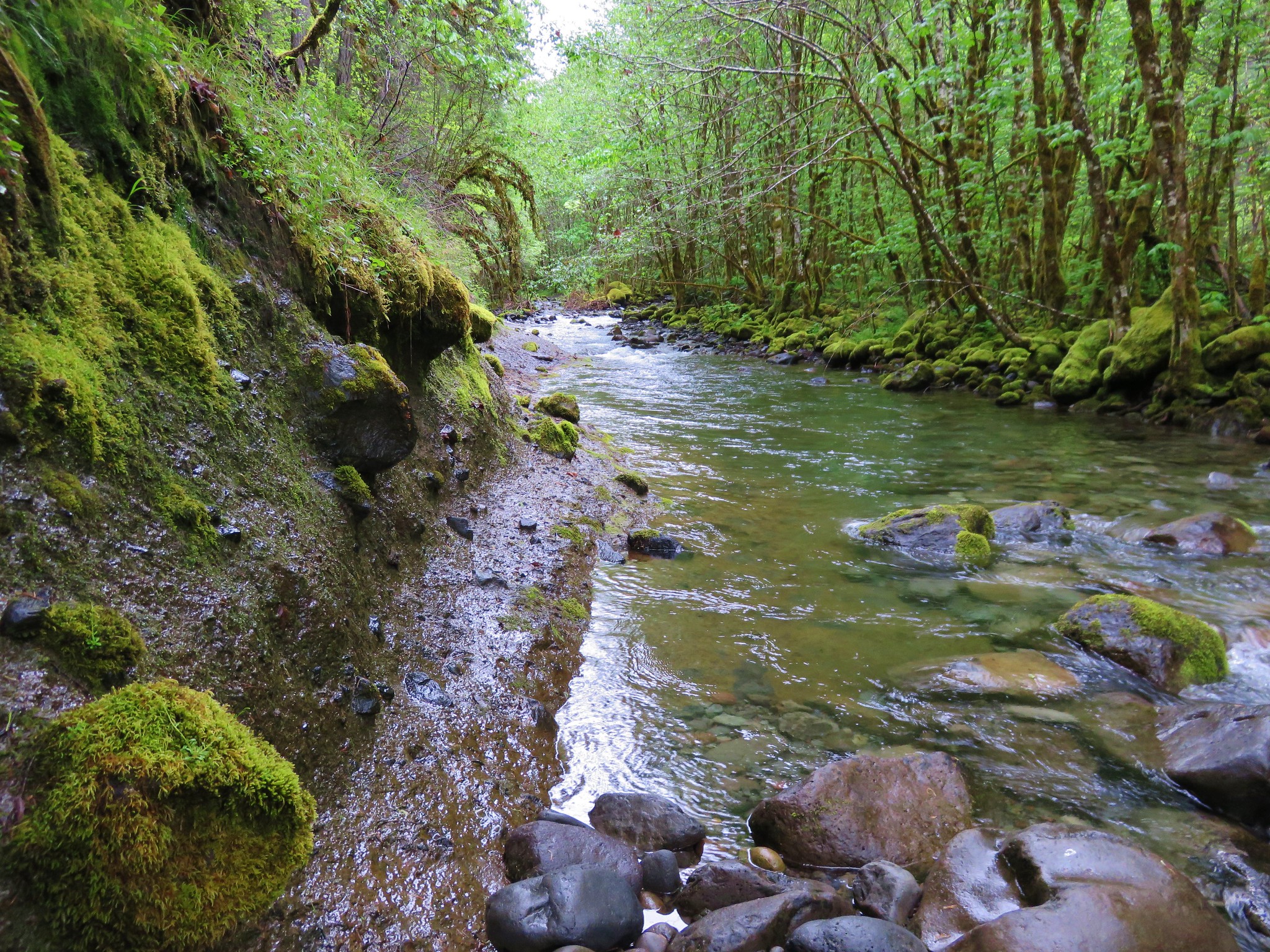 The rock was wet and slick, but we managed to find enough footholds to not slip into the creek which was quite deep in sections. A bit further along the creek we were stymied again by another big slide. While I was attempting to find a way around this new obstacle Heather realized that she had lost her phone. We backtracked recrossing the rock shelf to the spot of her slide where I found the phone wedged against the log covered in dirt. Luckily it was inside its case and undamaged. When we turned back to find the phone we had only covered about half the distance needed to rejoin the official trail and neither of us wanted to tempt fate with a third go at the rock shelf. From where we were we could tell by the GPS that the trail was just on the other side of the creek so we decided it was time to ford the creek. 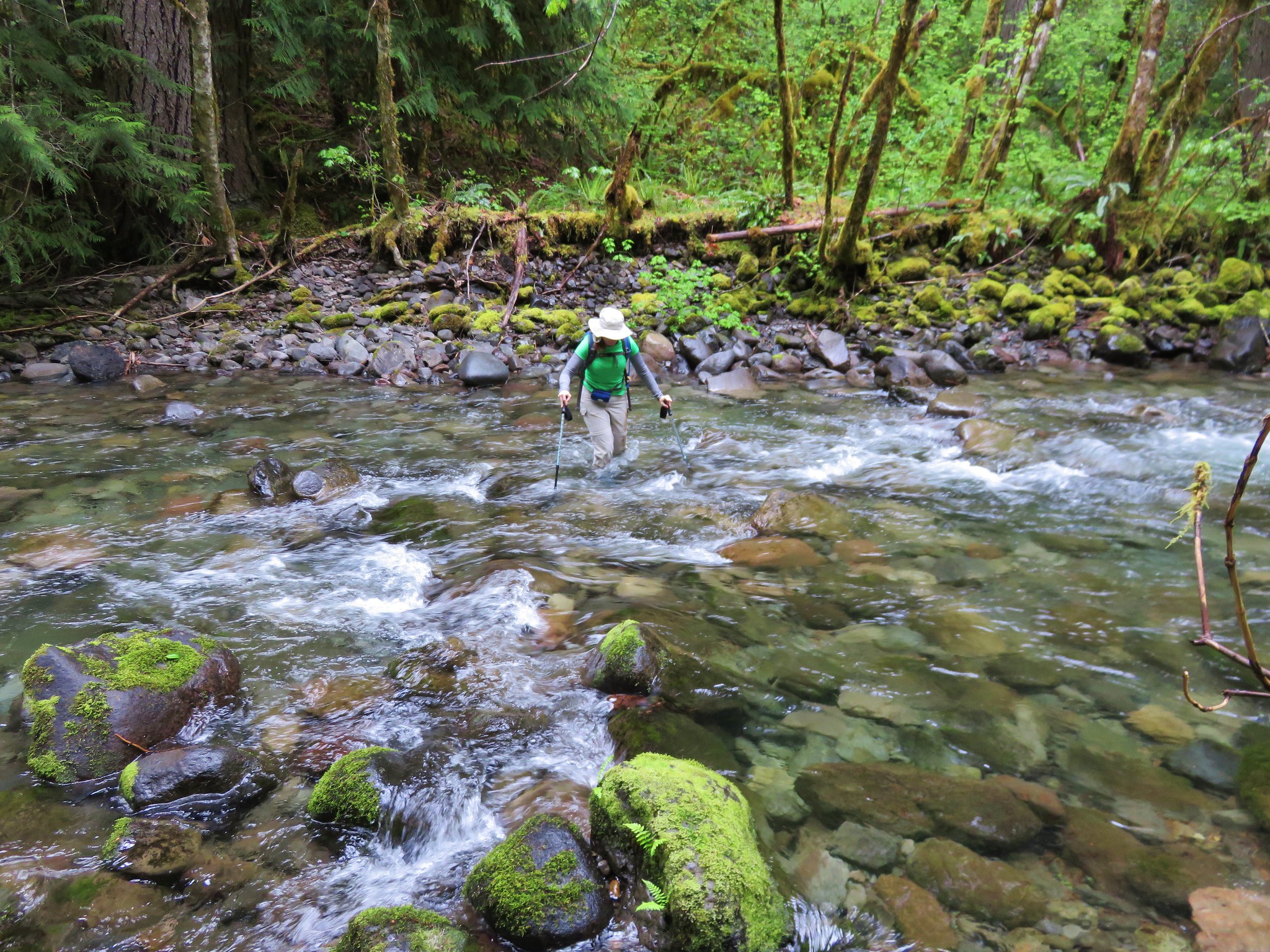 From the far side we had a pretty good look at the slide area that had started all the trouble. 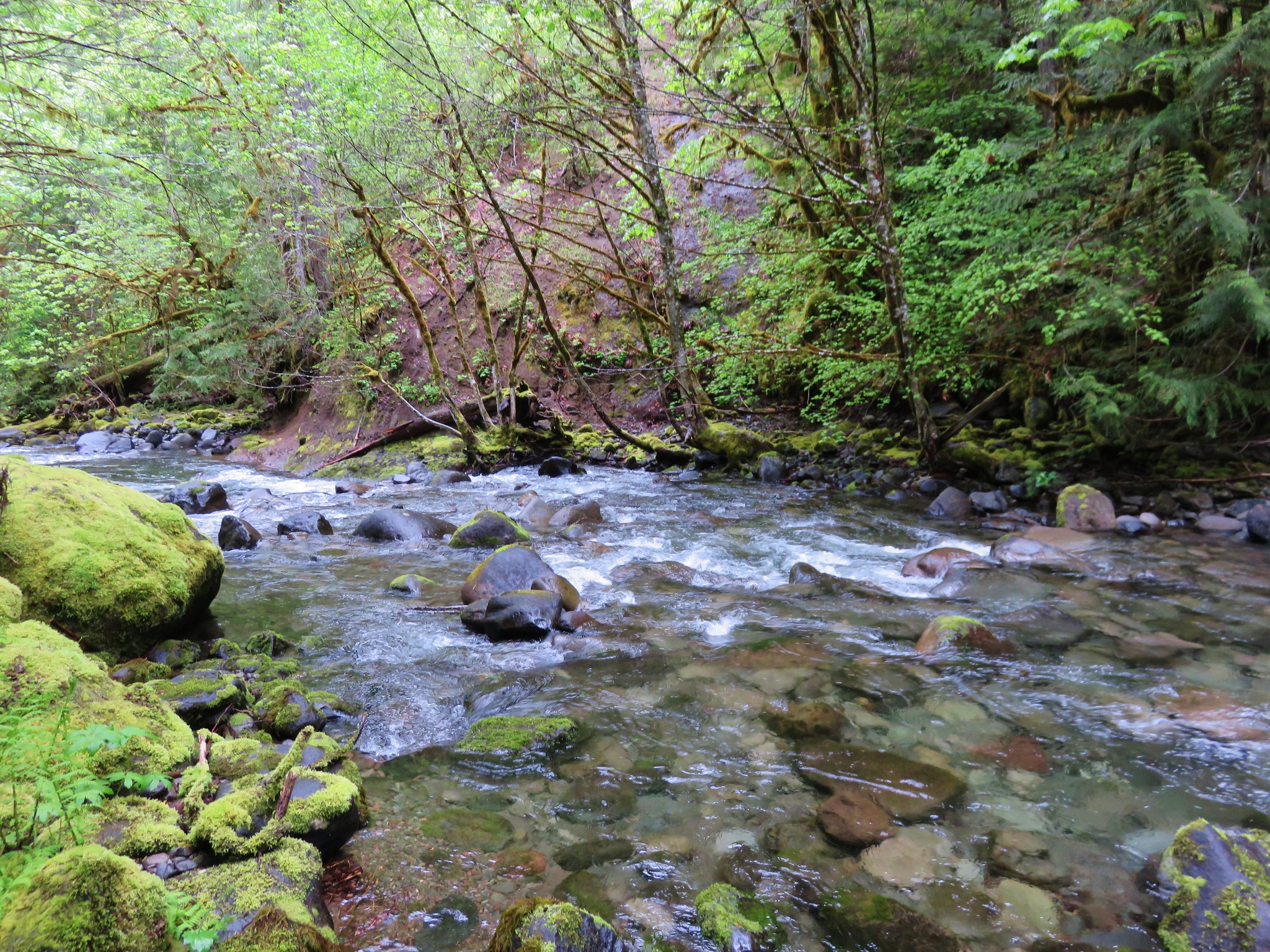 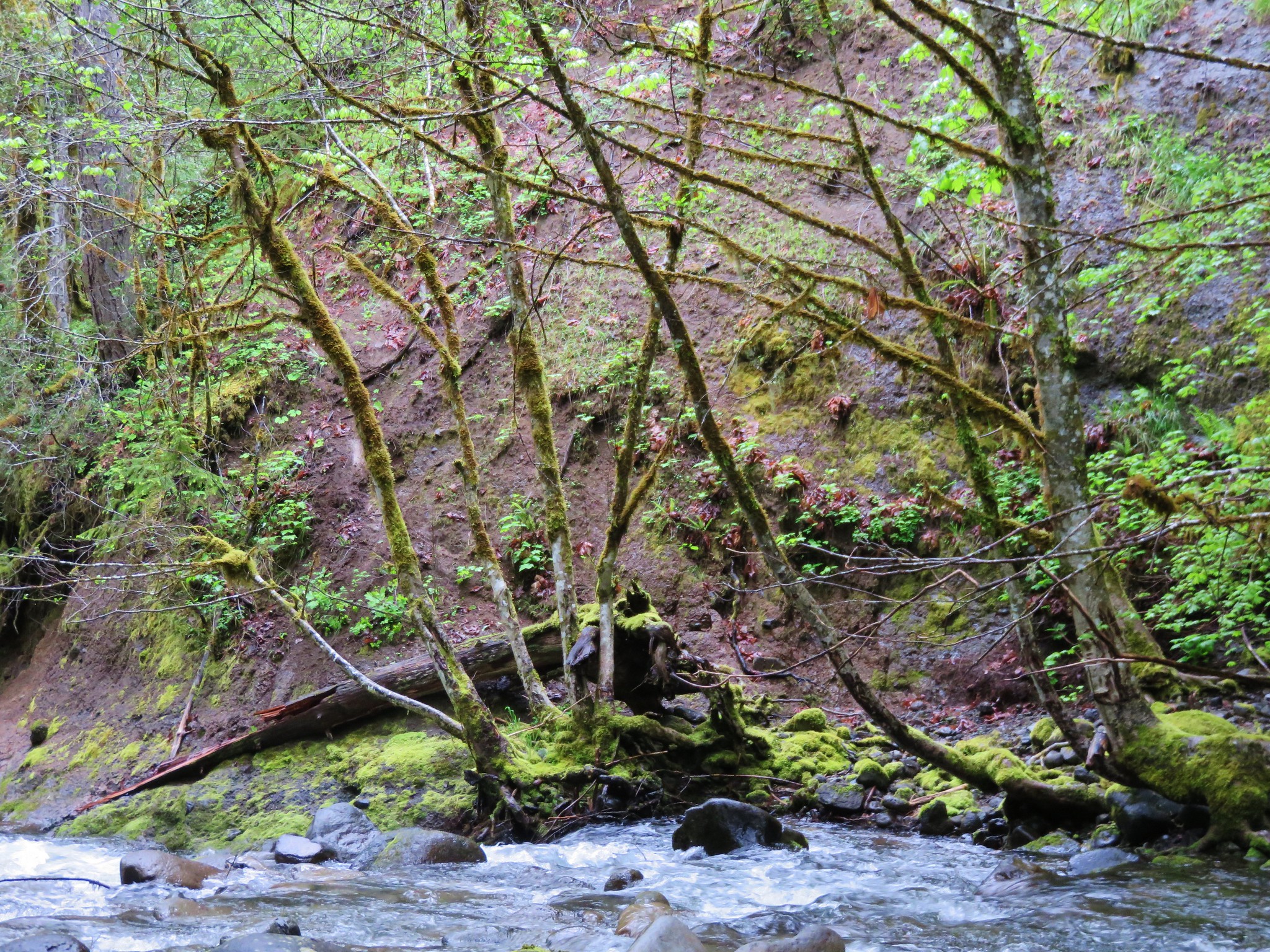 We came up from the creek and only had to walk about 10′ to find the trail. The trail in this section was a bit overgrown but in pretty good shape given most hikers turn back at the first crossing. 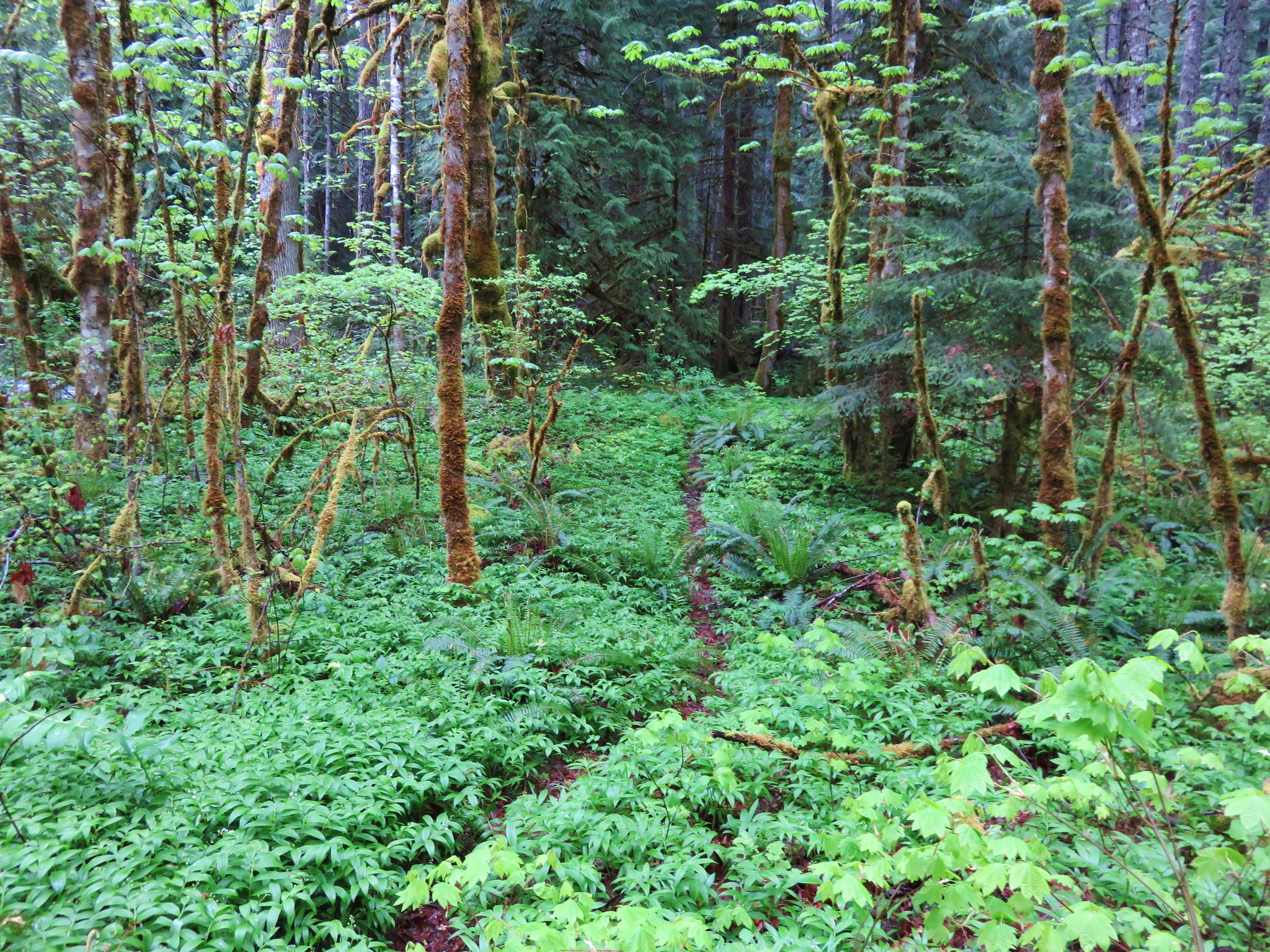 We made it to the second creek crossing where a nice cedar log serves as a suitable bridge. 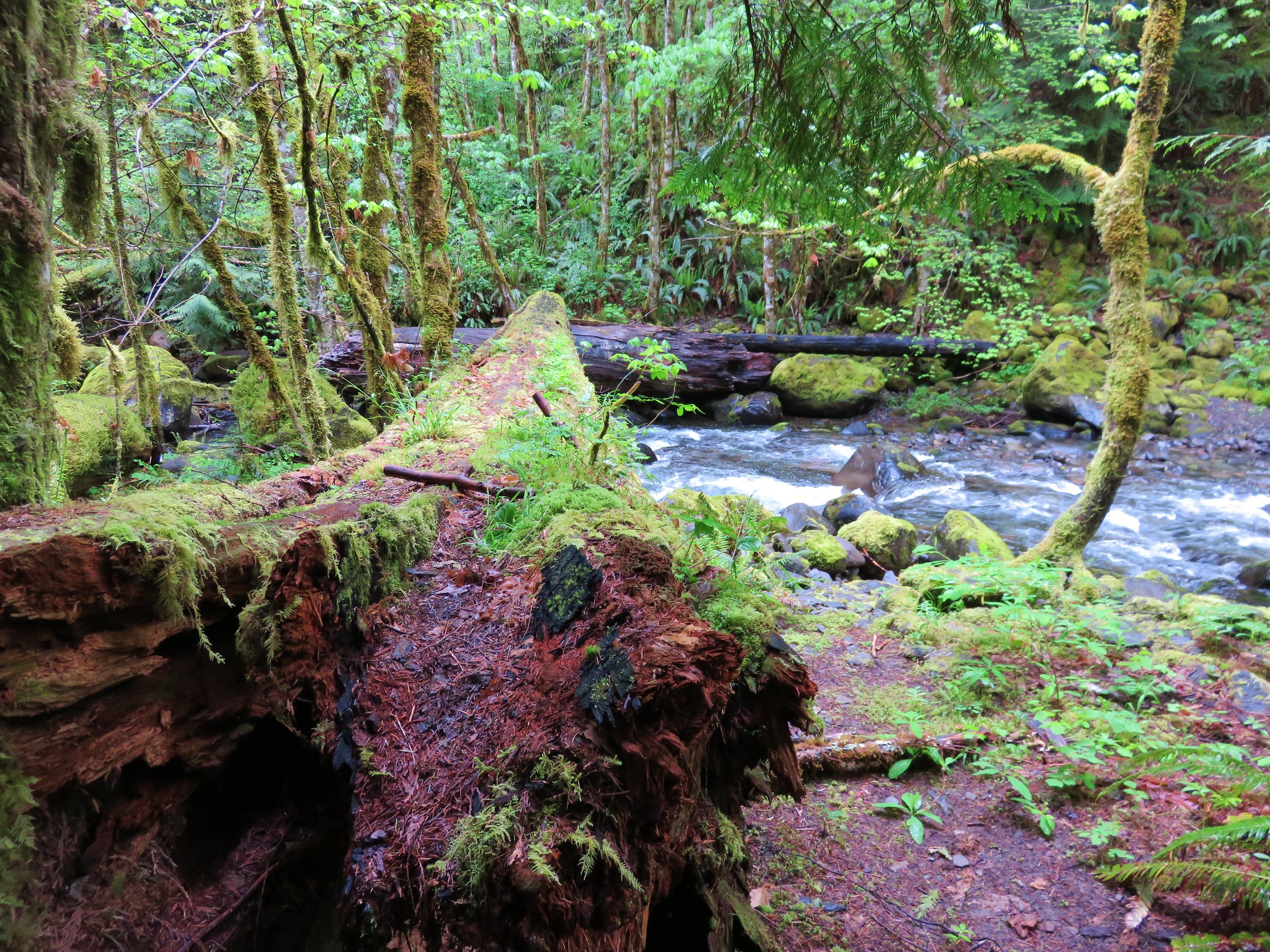 We had another 1.8 miles to go after the second crossing to reach the 5 mile marker. This section of trail was also fairly overgrown and narrow but there were no major obstacles along the way. The trail climbed up above the creek at times passing through a grassy meadow and past some nice rock formations. 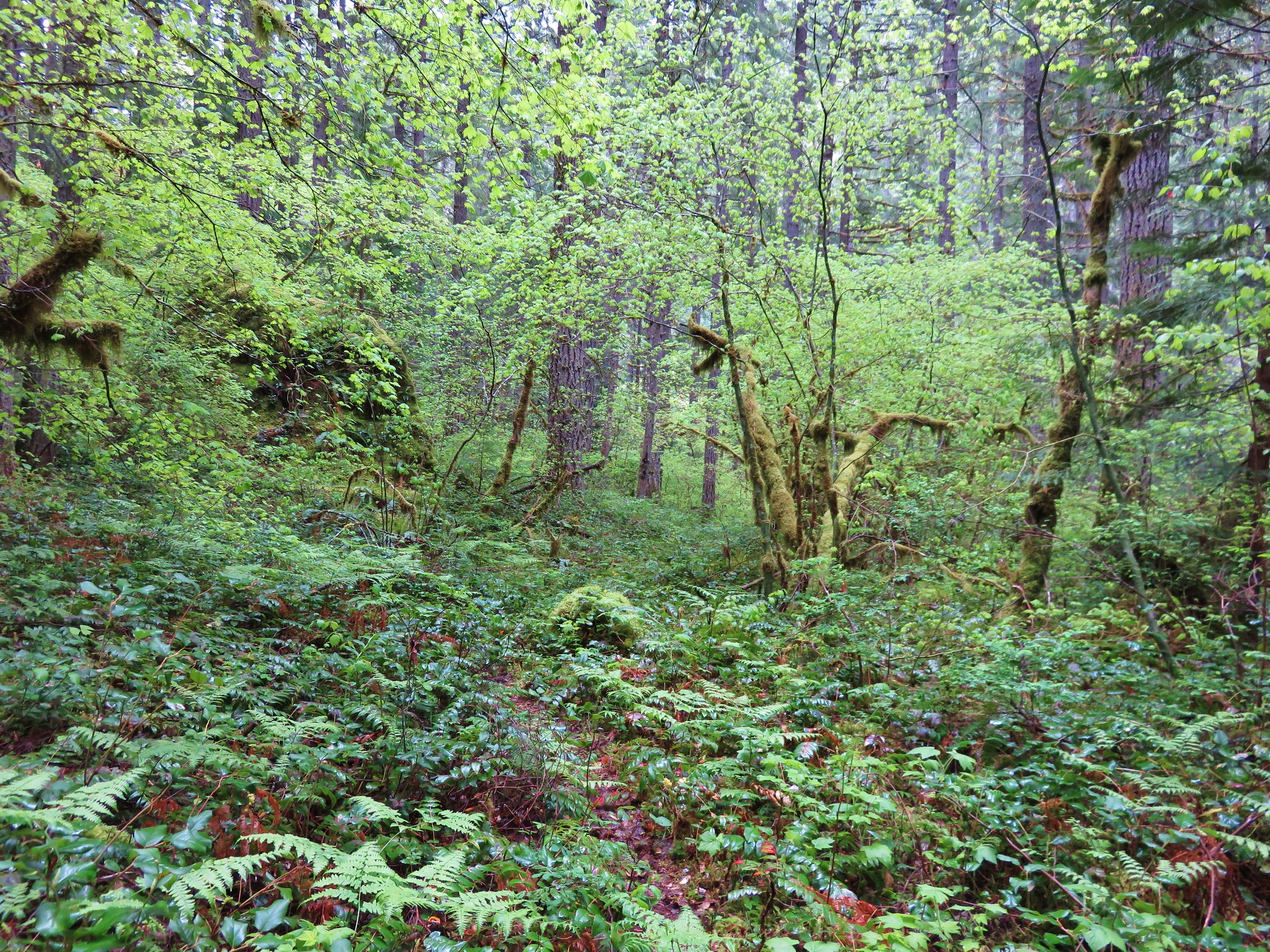 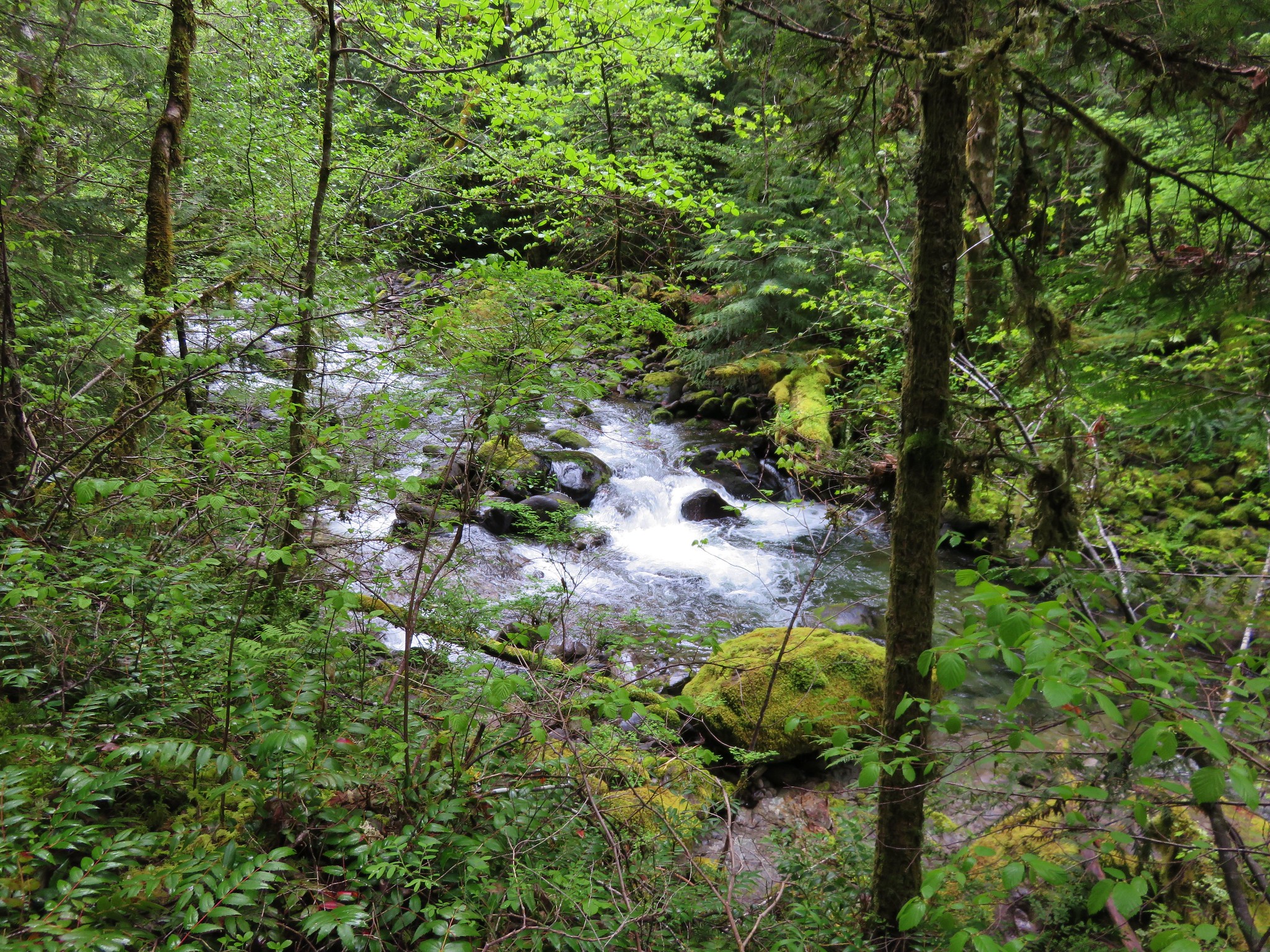 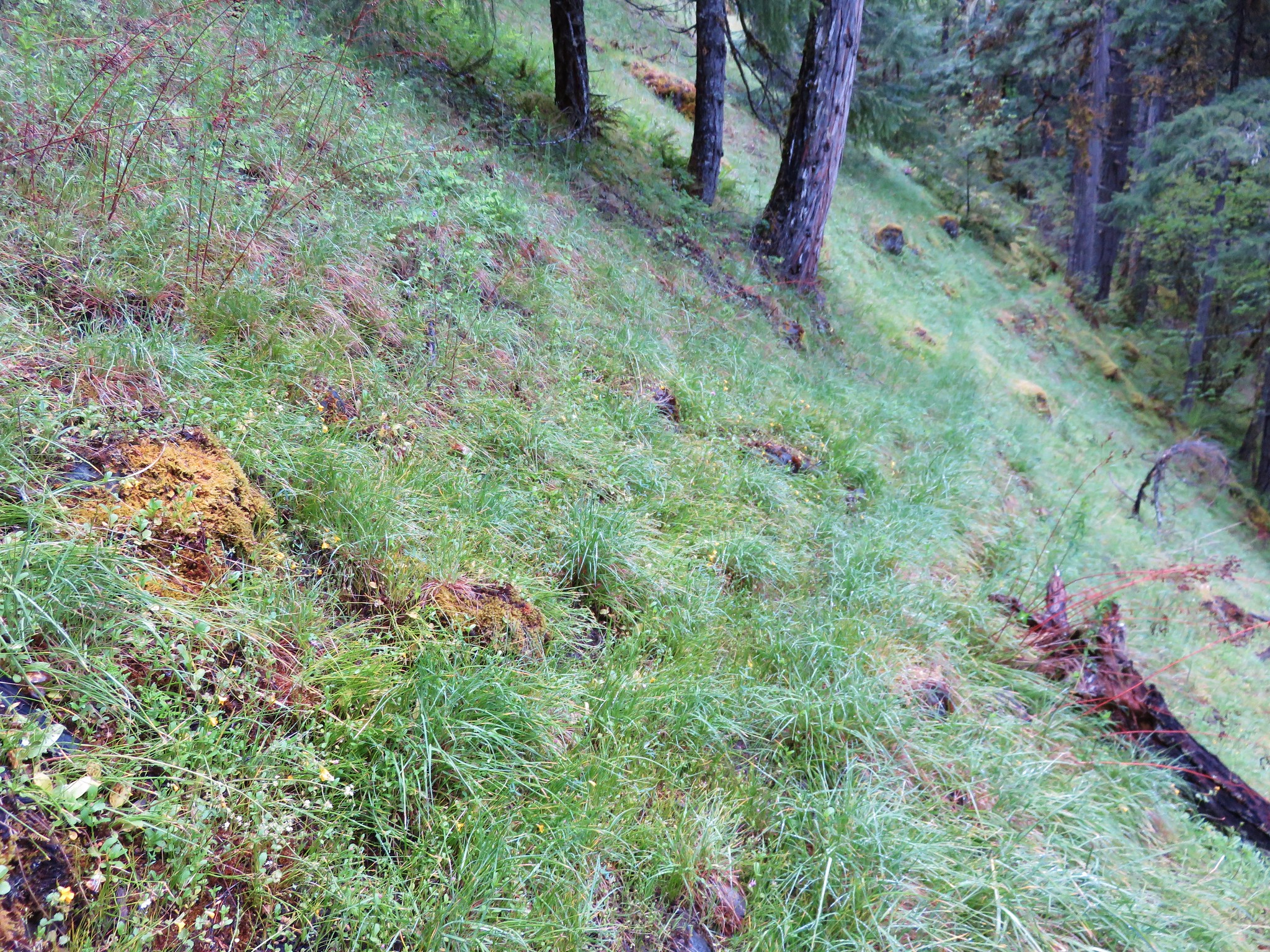 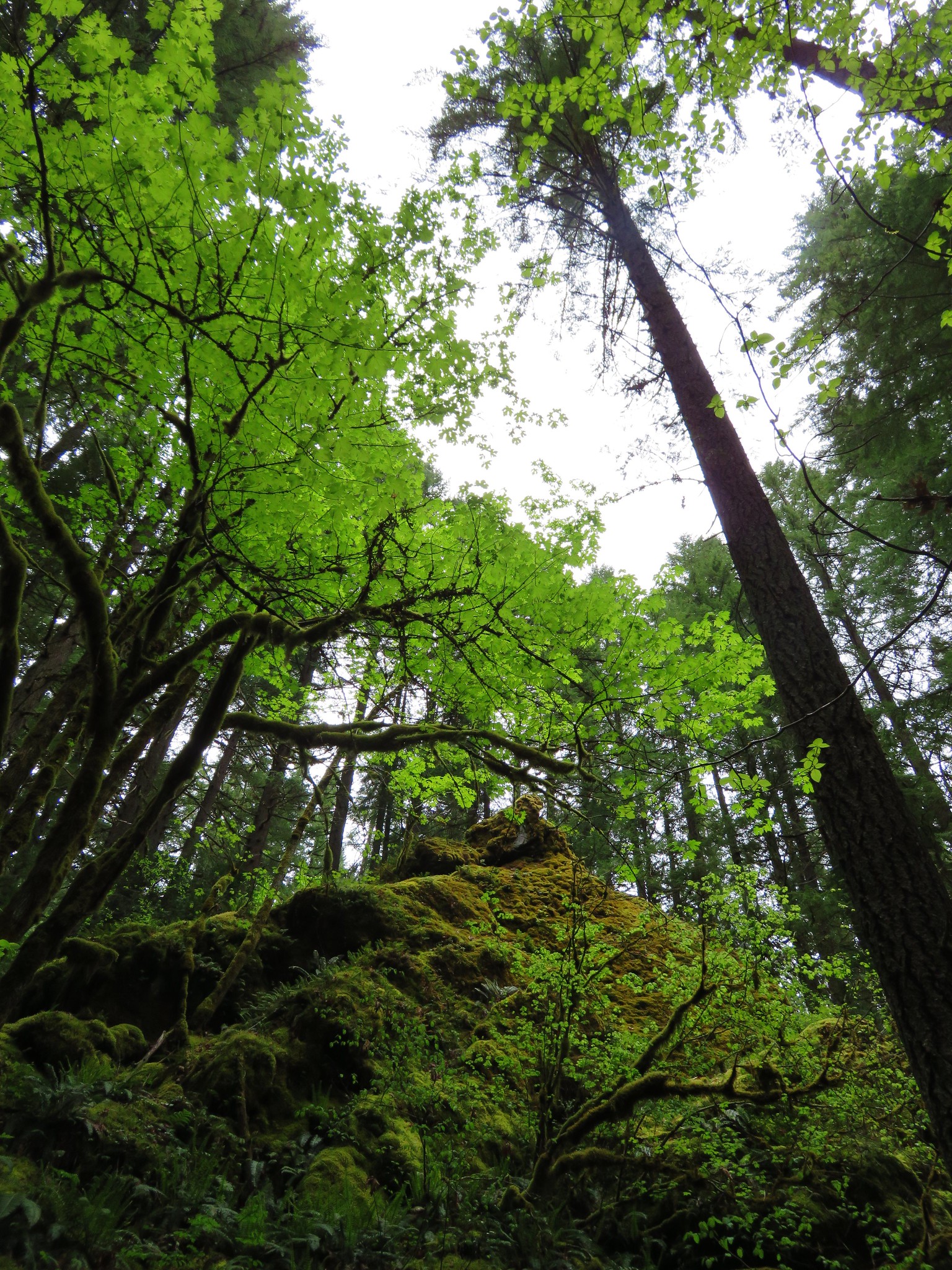 It also provided some of the best views of French Pete Creek. 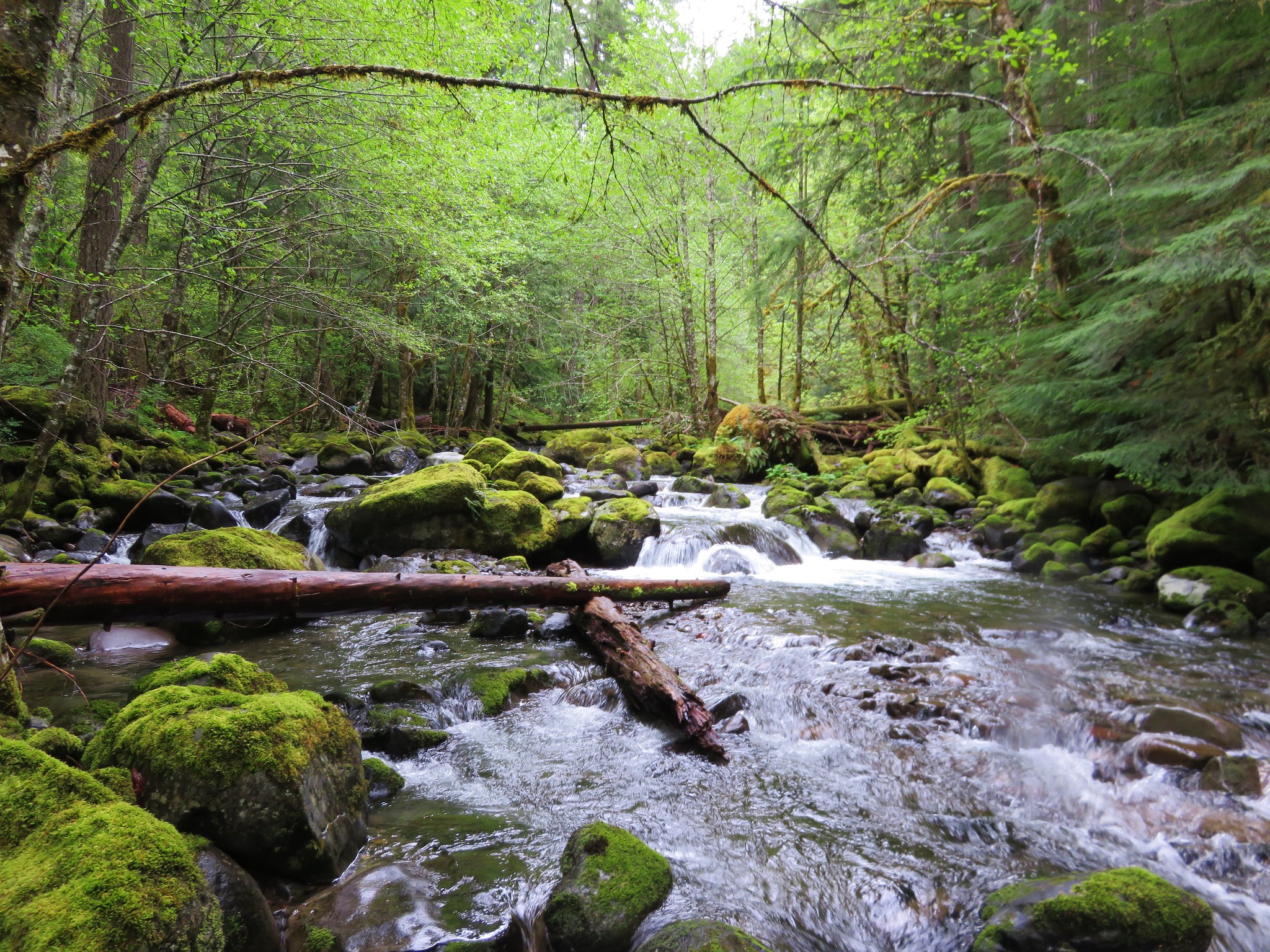 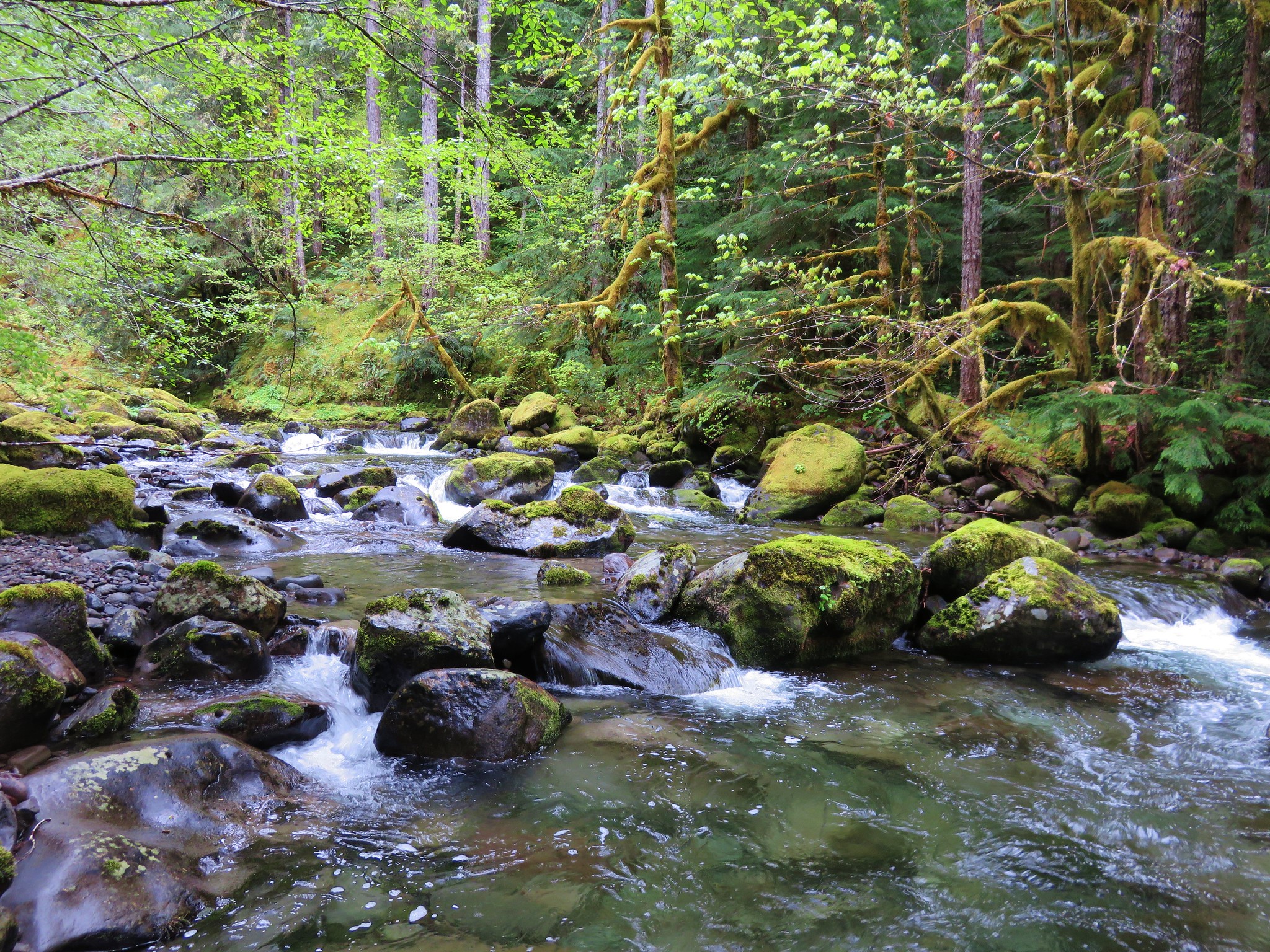 After reaching the marker we stuck to the official trail on the way back. 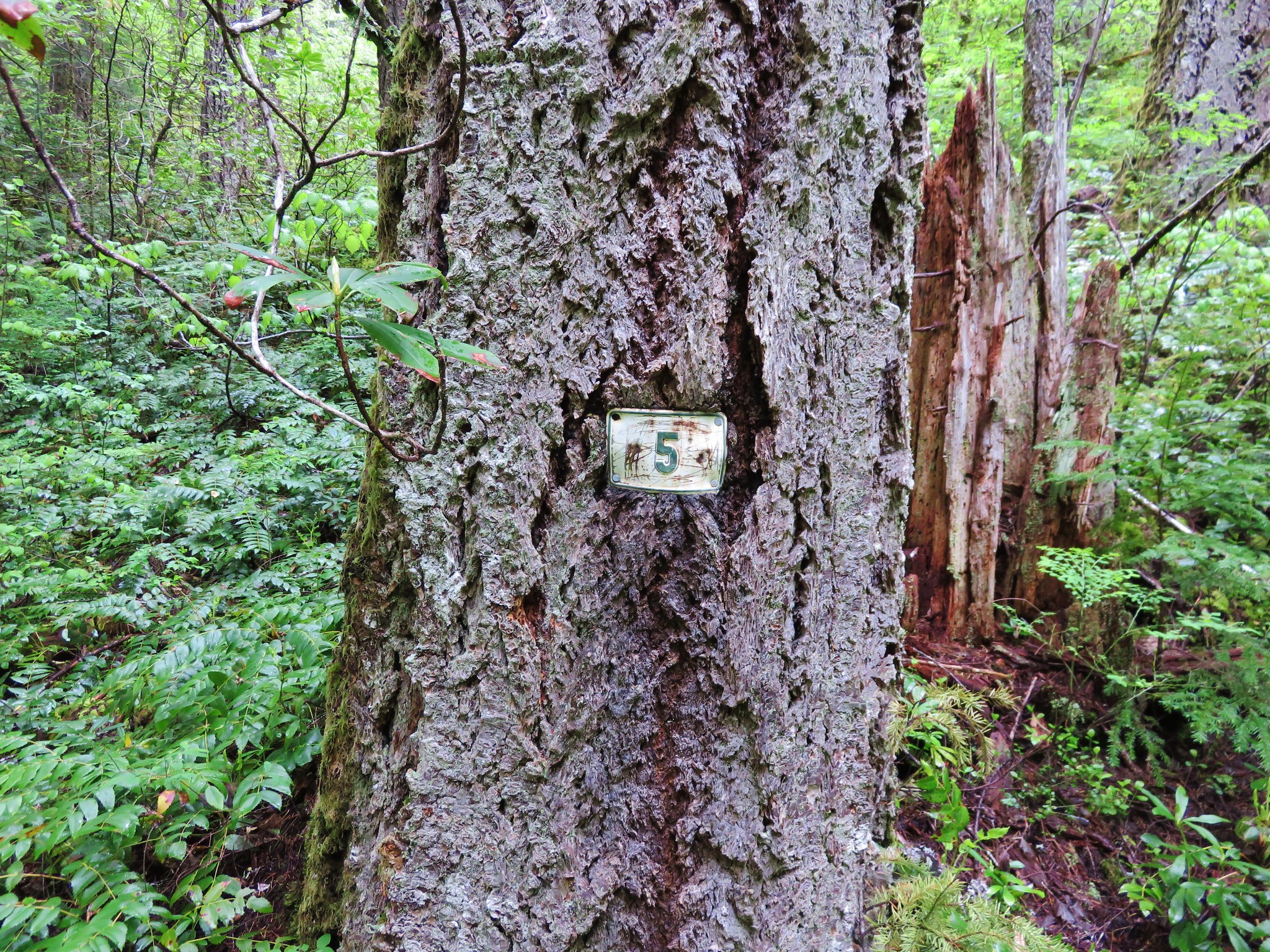 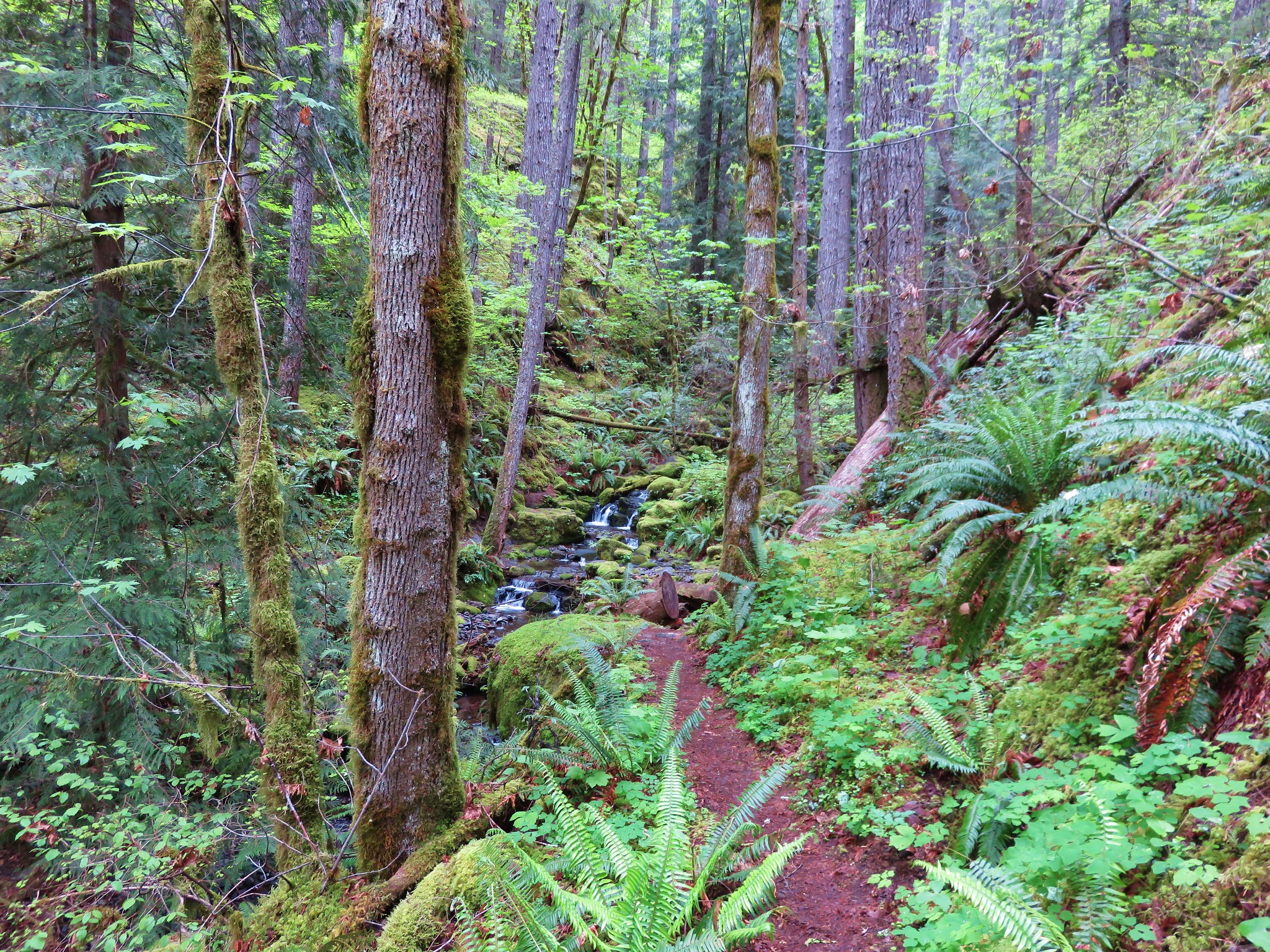 We only ran into three other groups of hikers, all on the way back between the trailhead and first crossing making for a nice quiet hike. Happy Trails!

I have read about French Pete Creek but never really seen any pictures. That is such a huge contrast to the barren awesomeness of the rest of the Three Sisters Wilderness.

It really is. The elevation there is only between 1800′ and 2800′ which is much lower than most of the rest of the wilderness and because it’s on the west side of the mountains it gets plenty of precipitation.

[…] We drove south to Eugene and took Highway 126 four miles east of Blue River where we turned right on FR 19 to Cougar Dam. After turning left on FR 1993 and crossing the dam we followed the road 11.2 miles to the Pat’s Saddle Trailhead. We chose to start with Olallie Mountain for a couple of reasons, first we thought that the lack of tree cover due to the fire might make this a warmer hike later in the day and second it was the longer of the two hikes. There are a couple of trails that leave from this trailhead. The French Pete Creek Trail is the first trail on the right. The upper section of this trail is not maintained (according the Forest Service webpage) and the forest around the lower section was impacted by fires in both 2017 and 2018. We hiked the first 5 miles of the trail from the lower trailhead prior to the fires in 2015 (post) […]