A dry forecast and a day off for Presidents Day seemed like a perfect excuse to get our February hike in.  For this outing we’d picked the South Willamette Trail. This was yet another trail we had yet to hike and this seemed like a good time of the year to do so because the trail lacks any highlights or views that would be impacted by inclement weather.

A single trail leaves the trailhead to the left of a large signboard. 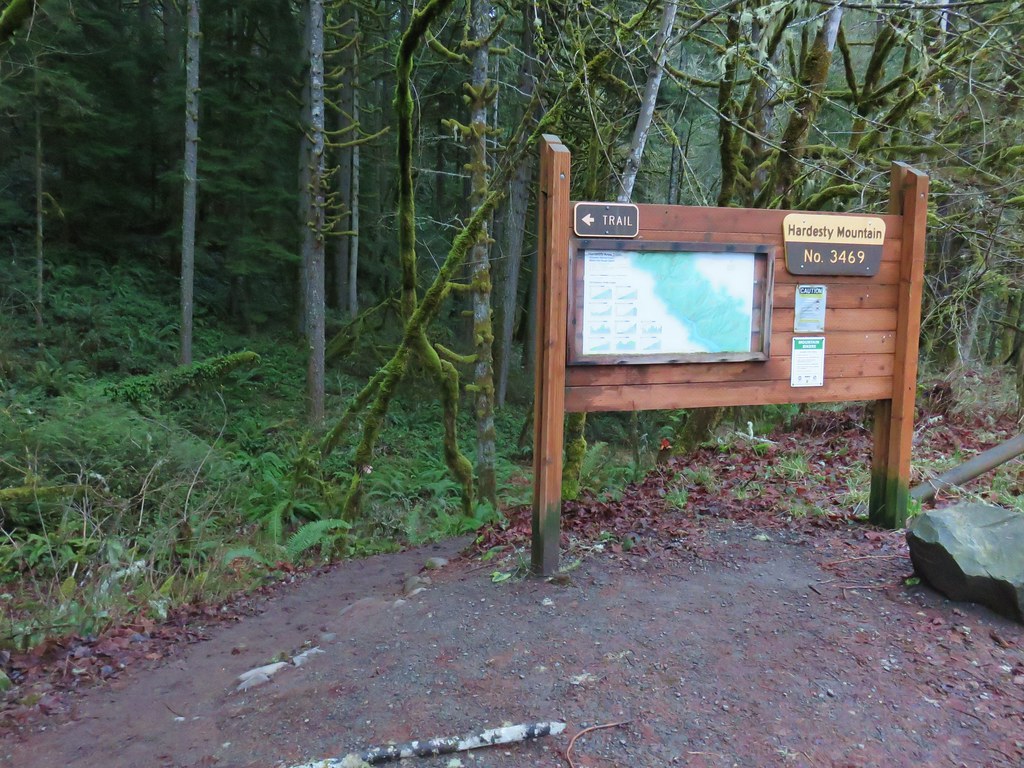 The trail is actually the Hardesty Trail which gains over 3000′ in five miles to the old lookout site atop Hardesty Mountain. Unless you’re looking for a training hike the old lookout site is now view less. For a slightly shorter and more scenic hike to that location start at the Mount June Trailhead instead as we did in 2013 (post).

Back to our current hike now. We followed the Hardesty Trail for .2 miles to the Goodman Creek Trail junction. 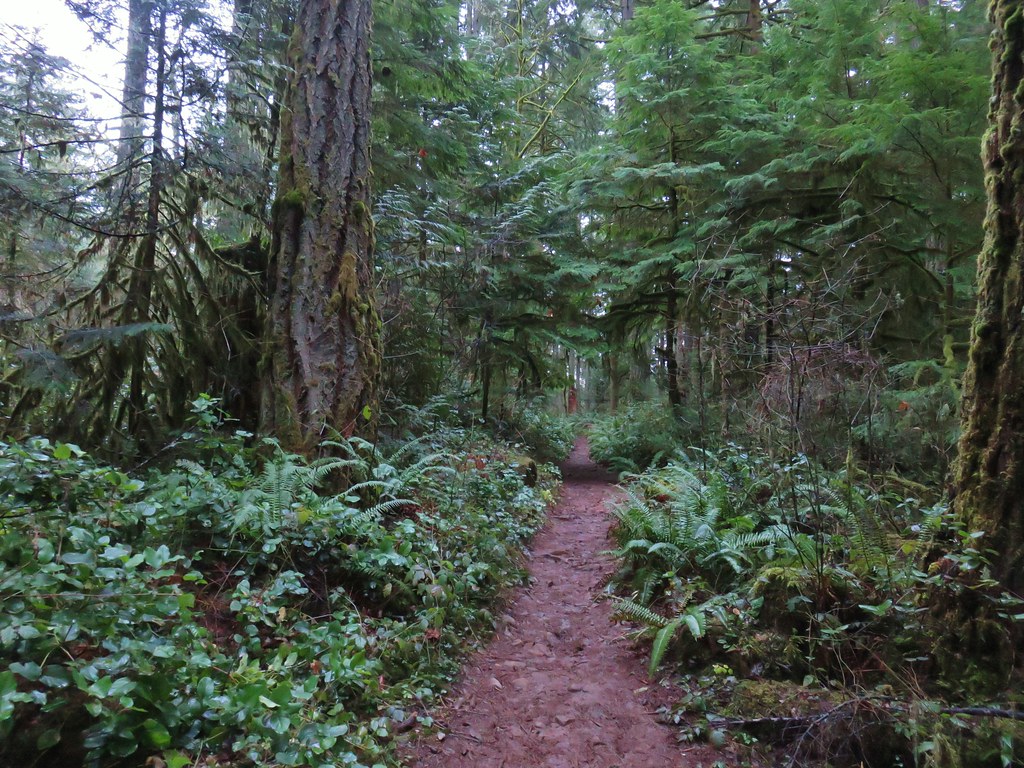 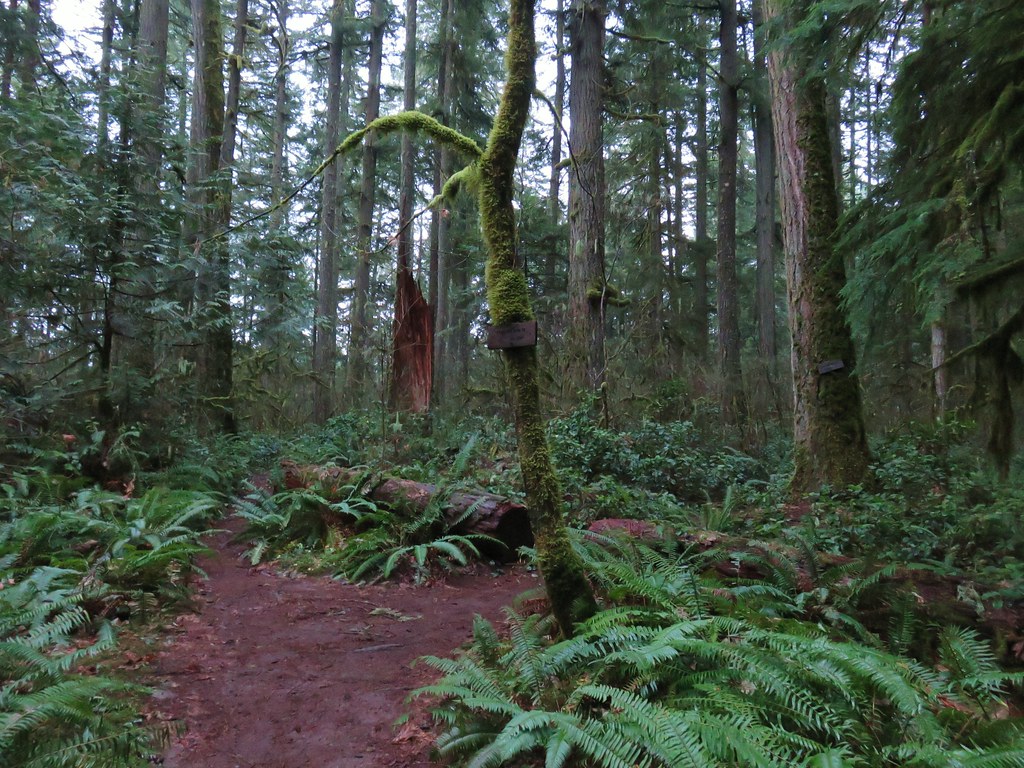 We stayed left continuing on the Hardesty Trail for another four tenths of a mile to the start of the South Willamette Trail. 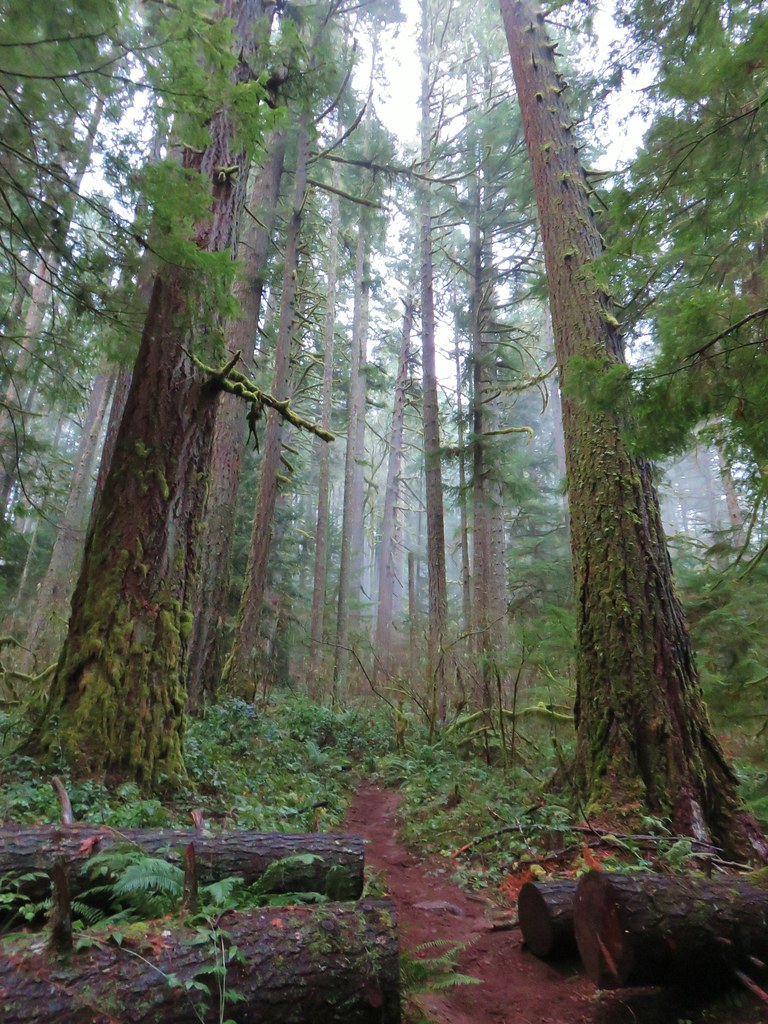 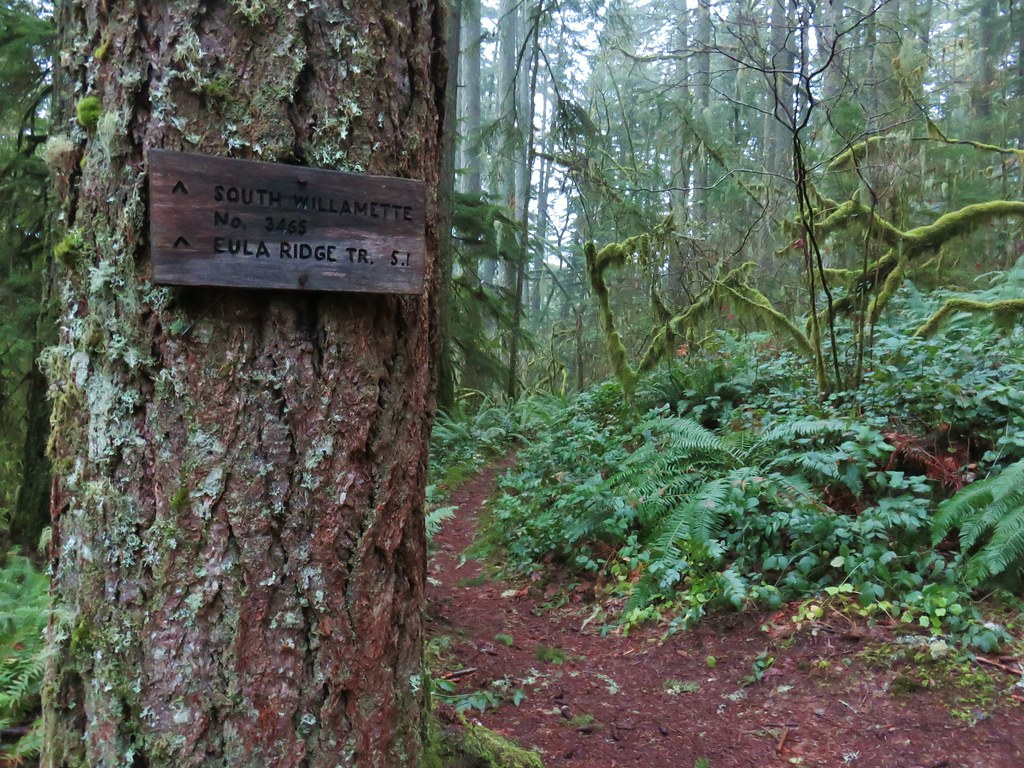 We stayed left again leaving the wider tread of the Hardesty Trail behind for the narrower but not overgrown South Willamette Trail. 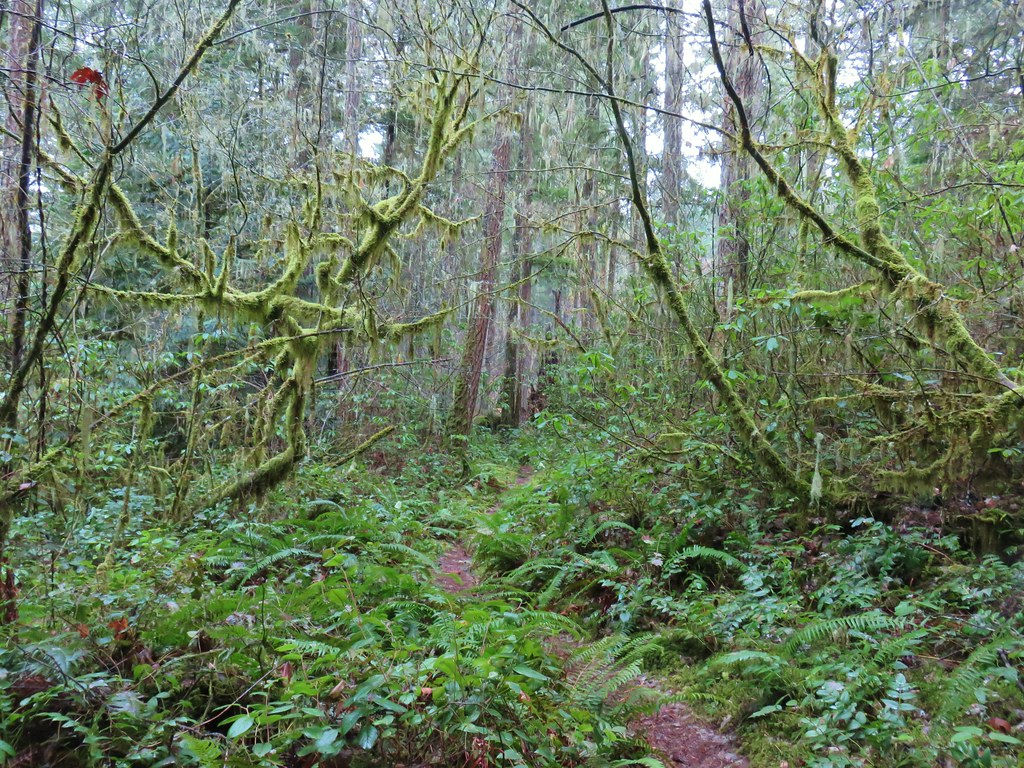 This trail runs parallel to Highway 58 but due to the presence of some private land holdings it bends back away from the highway which kept the noise down for much of the hike. There are not any views to speak of along the trail and although it crossed several creeks there are no waterfalls either. The trail simply passes through some different types of forest on its way from one end to the other. A half mile from the Hardesty Trail a nice footbridge brought us over an unnamed seasonal creek. 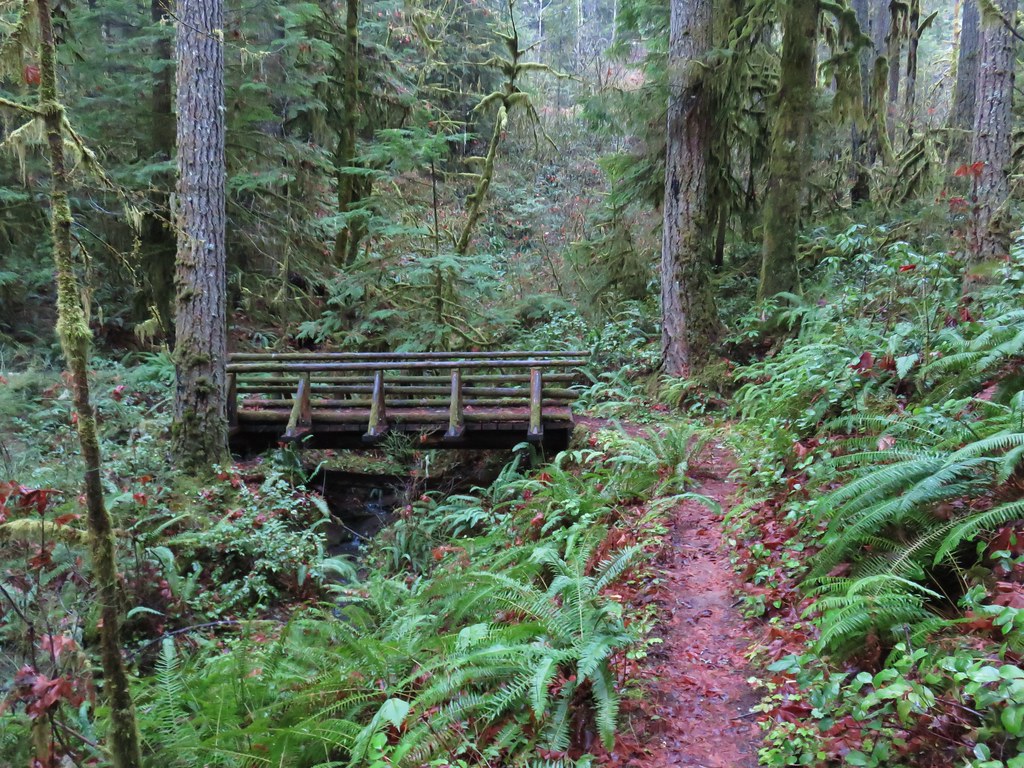 A half mile later we were crossing another unnamed creek. 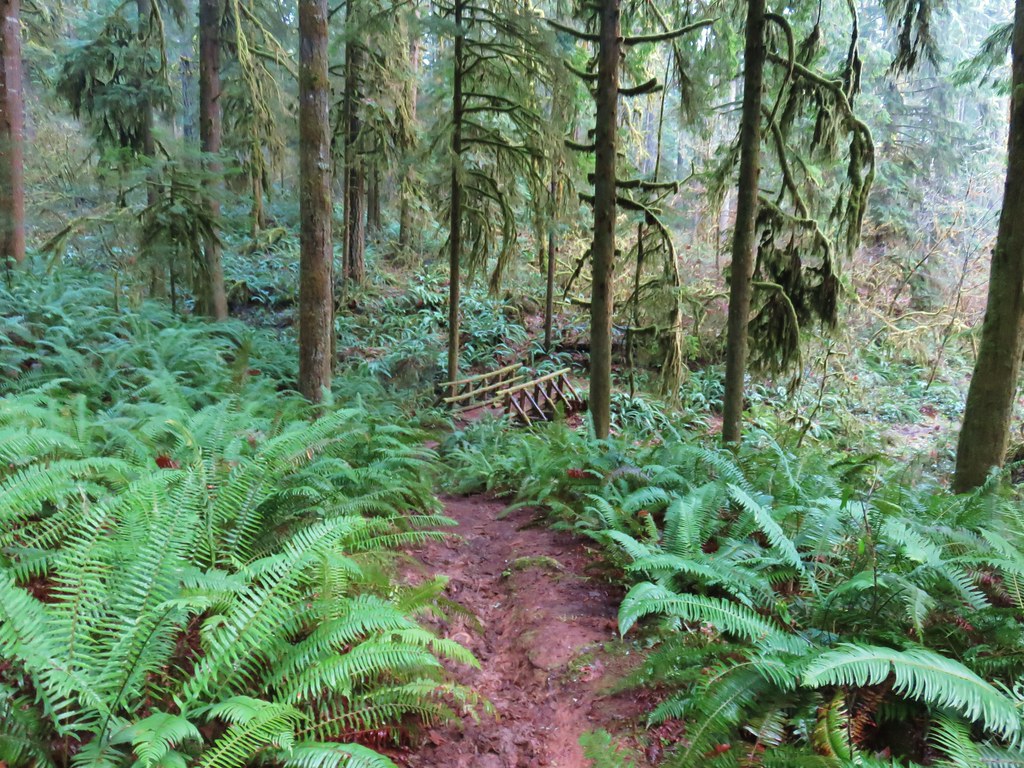 This was followed by a footbridge over Crale Creek just a tenth of a mile later and a log crossing of another stream just beyond that. 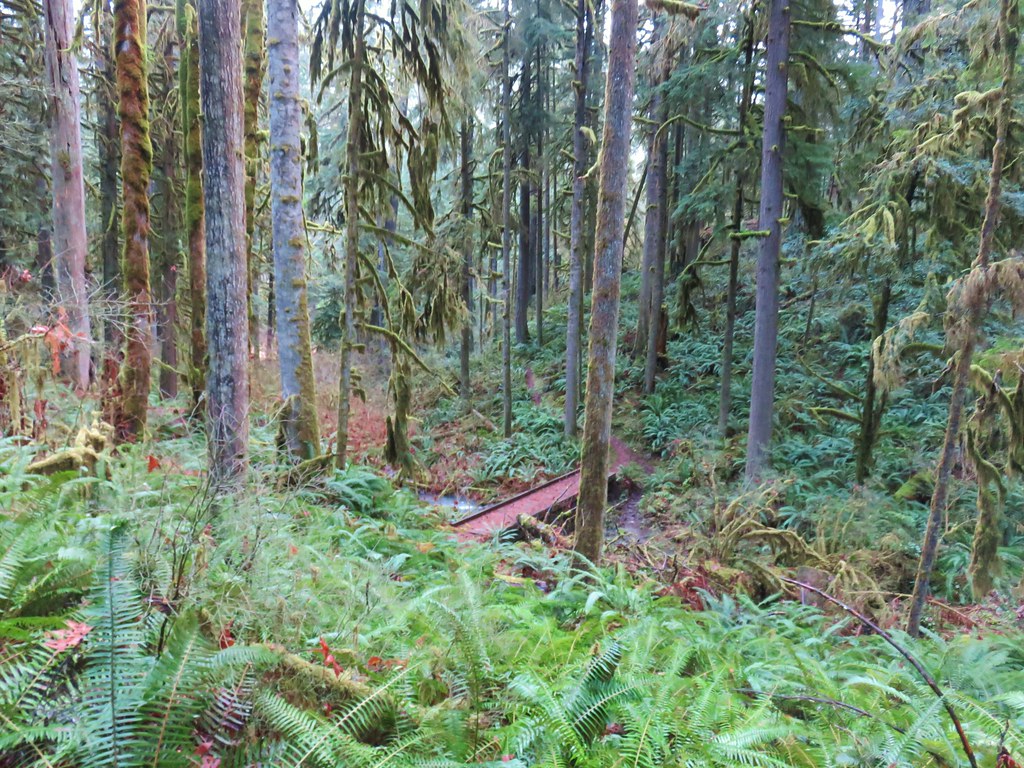 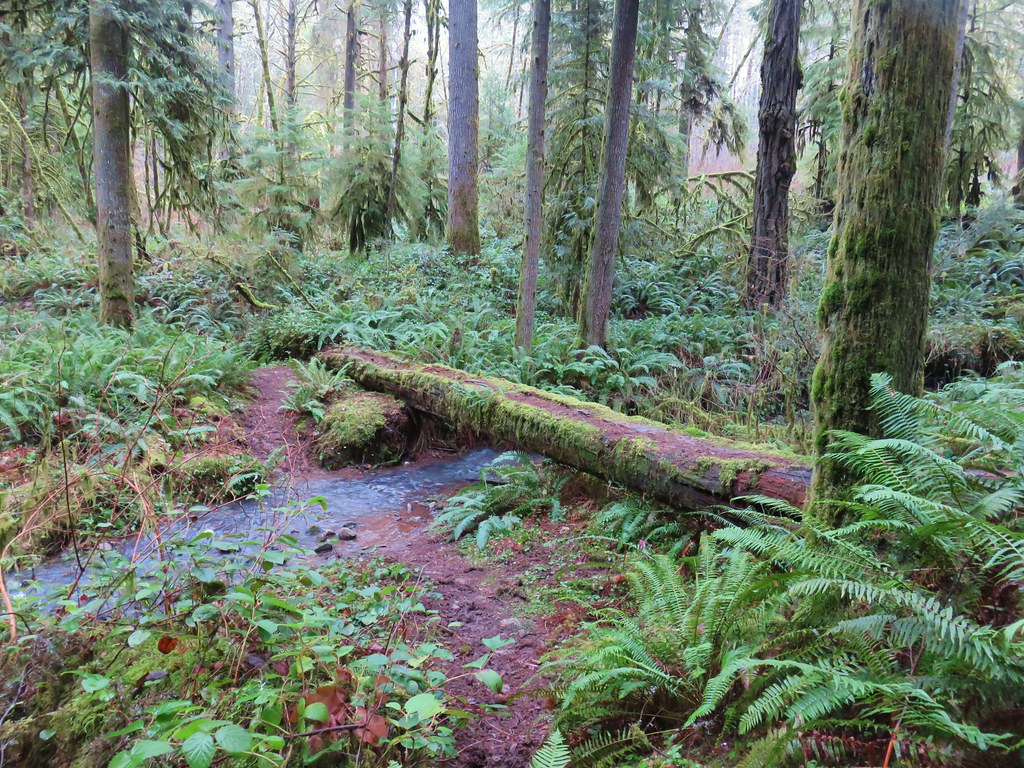 The trail then made a slight climb to cross Crale Creek Road. 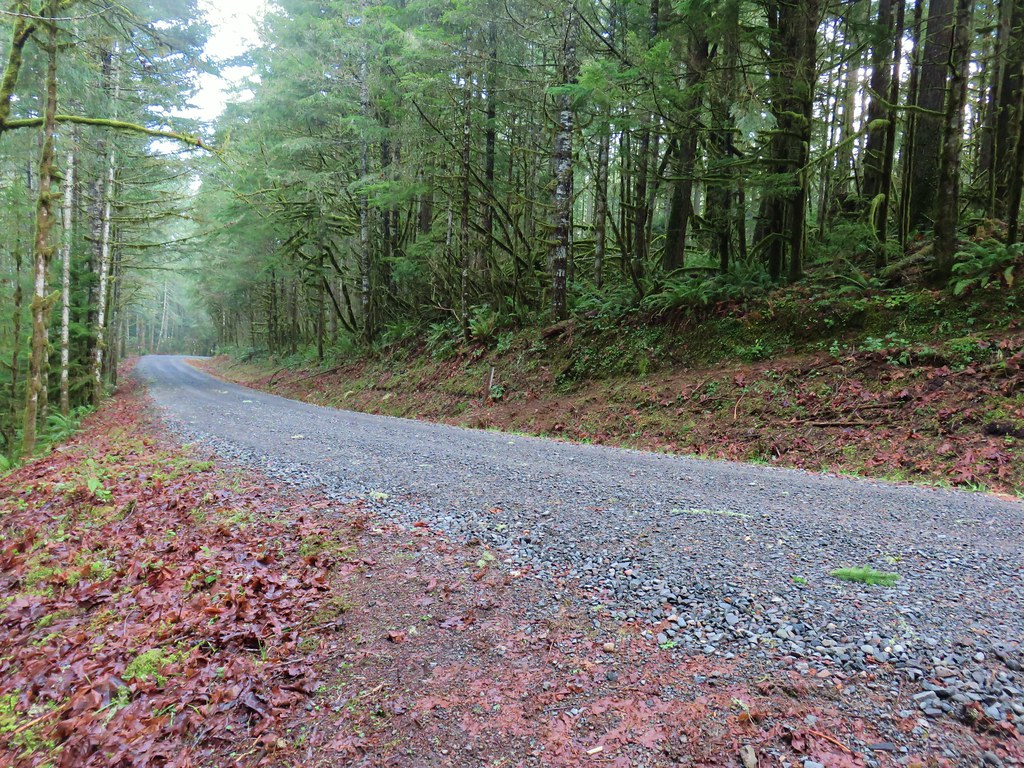 The trail climbed steadily for the next 1.75 miles gaining approximately 400′ to reach its high point at an elevation just over 1400′. There was just a little left over snow scattered about along the way. 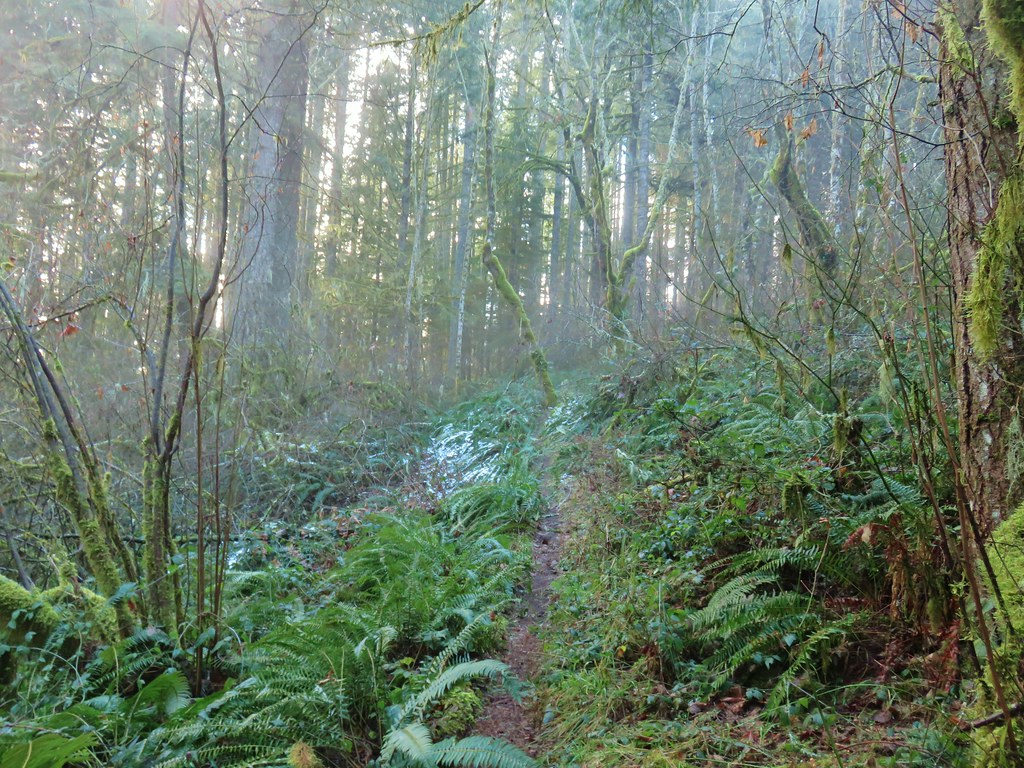 The Sun was shining overhead as we began to descend to a footbridge over Harper Creek. 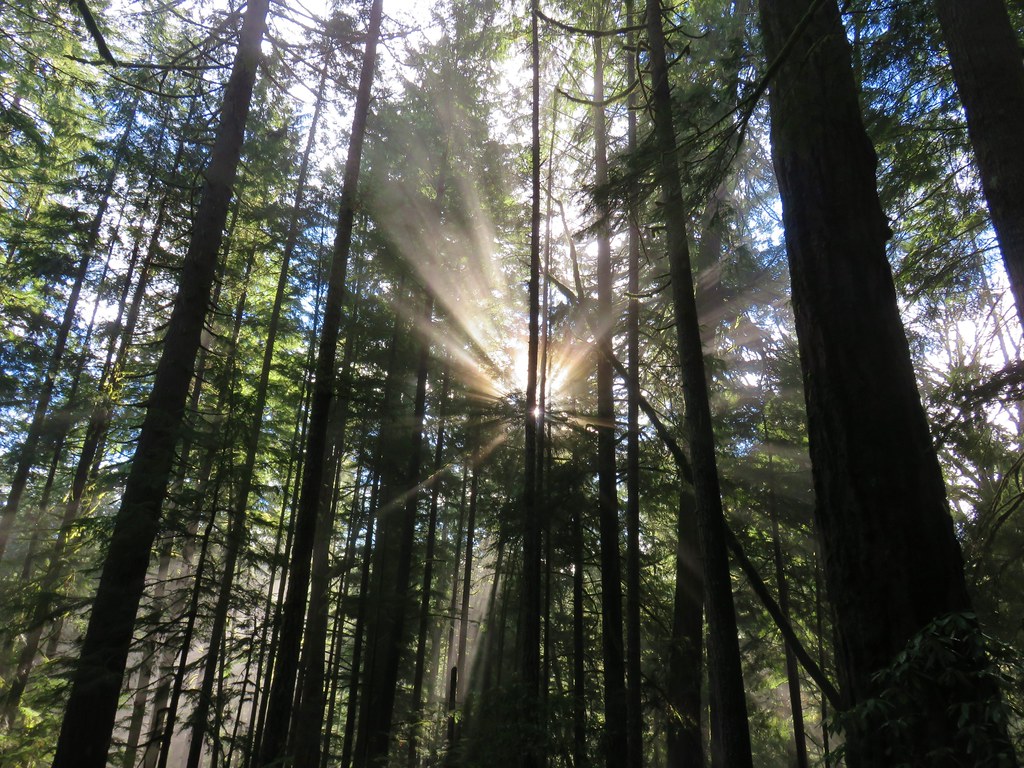 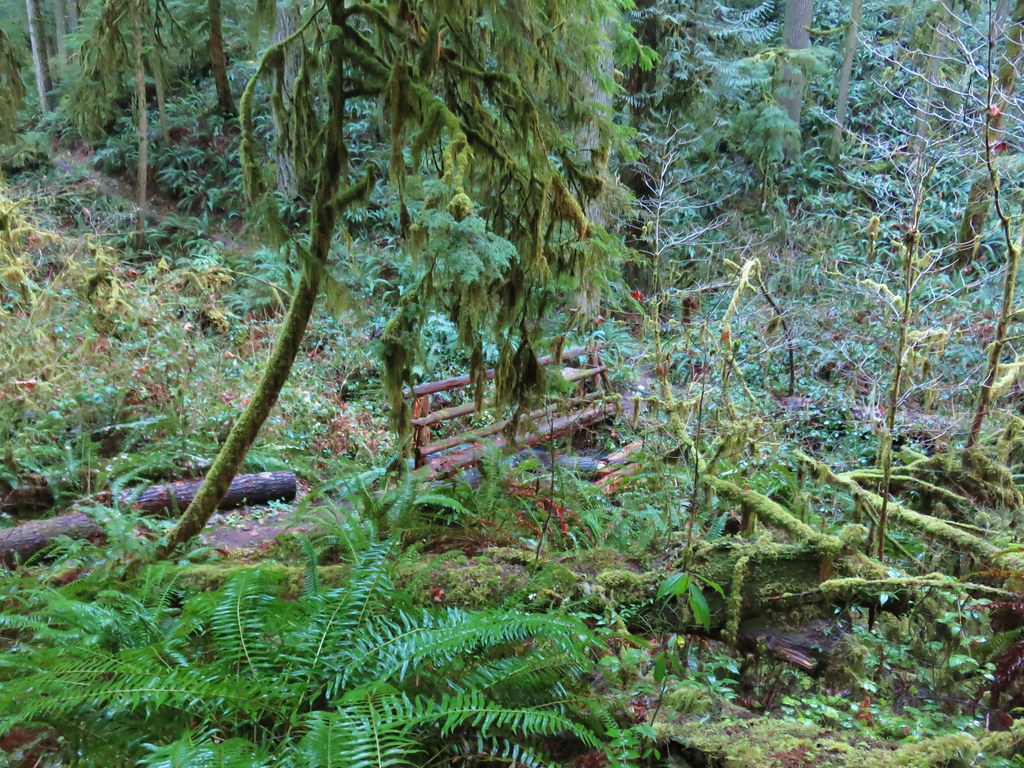 From there we climbed up and around a ridge gaining 280′ in half a mile before dropping again, this time to a bridge less crossing of North Creek. 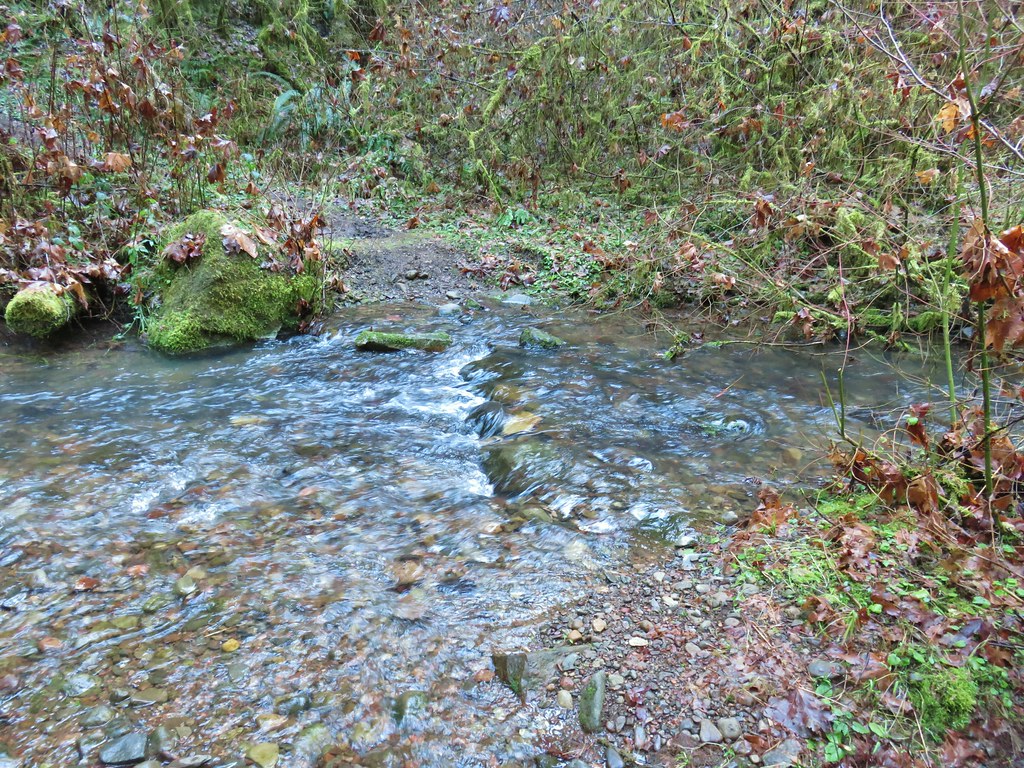 There was just enough water to prevent a dry rock hop across the creek and a pair of logs downstream were too slick and angled to be worth risking so we decided to make North Creek our impromptu turn around. We were only about a tenth of a mile from the Eula Ridge Trailhead so we had covered most of the trail and I had especially been struggling all morning.

We returned the way we’d come listening to the birds and watching for the small purple blossoms of snow queen. 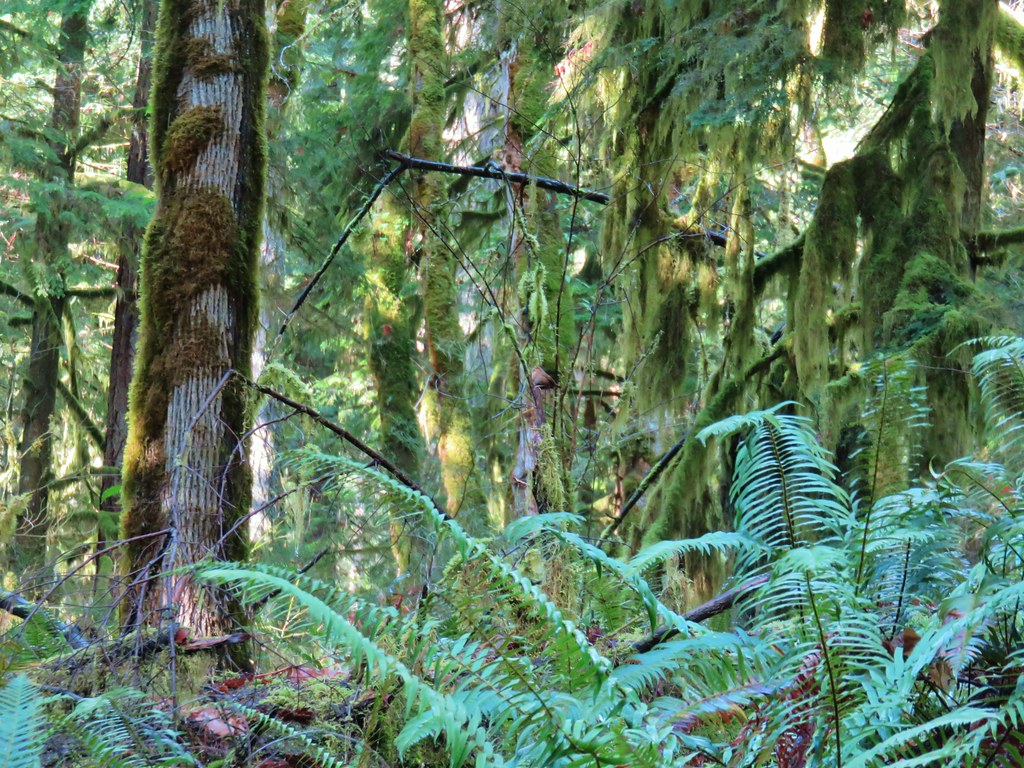 Wren signing along the trail 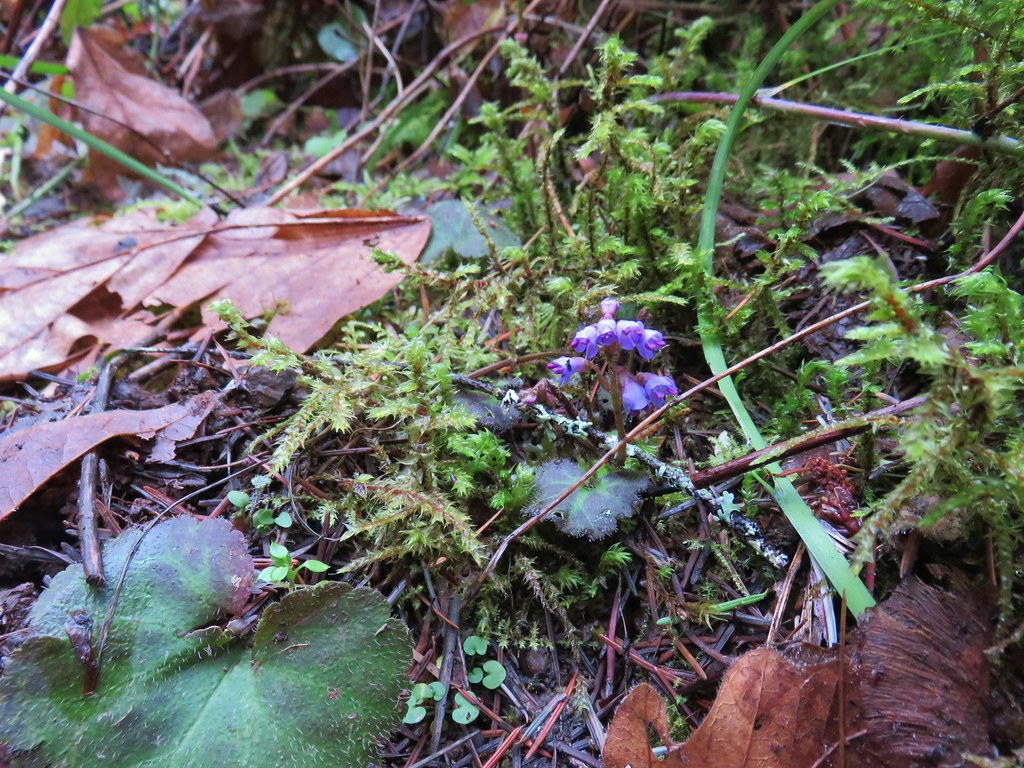 I had had a sore throat when I’d woken up and by the time we made it back to the car I was chilled. I spent the rest of the day and the next in bed ill which actually made me feel a little better about having struggled so much on a 10.8 mile 1600′ elevation gain hike.

The South Willamette Trail is definitely not a big reward hike, there are no views to speak of and aside from the few small creeks no real attractions along the way other than a nice green forest. That being said it was a good moderate winter hike and it’s open all year save for the worst storms. Happy Trails!

500 miles! Heather and I reached that hiking milestone for 2013 this past weekend. We hadn’t started out with that accomplishment in mind but as the year progressed added hikes and added distances (What’s down that trail?) made it a reachable goal. It’s amazing to us to think that all that hiking isn’t even 1/5 of what it would take to complete the entire 2,650 miles of the Pacific Crest Trail. Even so it was a nice feeling to hit that mark before the year was over.

On to the hike that put us over the top. We headed back down to the Eugene area for another creek hike. We had hiked both Larison and Fall Creek in the same area back in March, and this time we had our sights set on Goodman Creek in the Willamette National Forest. This trail offered a chance to climb up Eagles Rest to a viewpoint overlooking the Lost Creek Valley. We woke up to some pretty heavy morning fog and weren’t sure what we would find at the trail head, but shortly after leaving Eugene on Highway 58 we rose above the fog to a nice bright morning. The Goodman Creek Trail actually starts on the Hardesty Mountain Trail near milepost 21 on Hwy 58.

The trail set off in an old growth forest full of moss and mushrooms and soon split with the left fork heading up to Hardesty Mt. and the right fork to Goodman Creek.

The trail slowly climbed at a distance from Goodman Creek for 2 miles where a small creek joined the main branch of Goodman Creek. Just before the confluence there was a side trail at the back of a campsite leading down to the small creek and a pair of scenic small falls.

After visiting the falls we crossed Goodman Creek on a log footbridge and continued another 2.2 miles to another trail head on Goodman Creek Rd.

From the road the trail then continued to climb through the forest to the Ash Swale Shelter. We saw several rough skinned newts in this section. The shelter was in good shape and offered a nice spot to sit and have a bite to eat.

From the shelter it was another mile to the former lookout site atop Eagles Rest. The trail crossed paved Eagles Rest Road just .3mi from the shelter. The forest changed dramatically after crossing the road. Until then the forest had been damp and full of moss, ferns, and various mushrooms and fungus. On this side of the road the forest was much drier and the undergrowth more sparse. Sunlight began filtering through the trees and soon we reached a viewpoint overlooking the Lost Creek Valley.

We continued up the trail to the better viewpoint atop Eagles Rest. Here we could see Hardesty Mountain and Mount June to the east (A hike we had done at the beginning of June). To the west the valley still appeared to be fogged in. There were several burns taking place in what looked to be clear cut areas in the valley leaving a bit of a haze but it remained a decent view.

We hadn’t seen any people all day and the forest had been full of peace and quiet up until the target shooting began down in the valley. With that we decided it was time to head back down the trail and make our back to the car. The forest had brightened as the Sun passed overhead making the forest colors even more striking.

The trail was in good condition and well used although we didn’t run into very many people until the final two miles. Given it’s low elevation (starting @ 1000′ and topping out @ 3024′) and easy trail head access this hike is an option much of the year making it a good choice for late fall or early spring.

Our other goal for the year was to do at least one hike a month (January was lost due to our passing the flu around) so we’re hoping to get out at least once more this year. Until then Happy Trails.