We headed over to Central Oregon for the last part of our vacation to visit our families and get a couple more hikes in on the east side of the Cascades. Originally we had planned on combining two hikes in one day for our first hike. Tipsoo Peak in the Mt. Thielsen Wilderness followed by Mount Scott on the rim of Crater Lake. We had to abandon those plans for good when the Government Shutdown closed Crater Lake so we turned to a standby hike along the Deschutes River between Trout Creek Campground and Mecca Flats.

With a trail head at each end of this 7.6 mile segment it allowed us to set up a shuttle with Deryl’s parents where they would start at Mecca Flats with Nique while we started at the Trout Creek Campground. The idea was we would do the whole trail both ways while the went from their car to ours, then we would drive them back to Mecca Flats to pick up their vehicle. With the plan set Heather and I headed to Trout Creek and set off along the Deschutes through the rivers canyon. 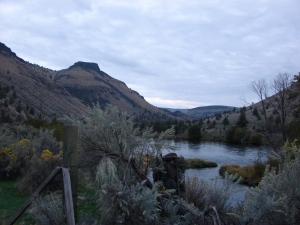 The trail follows an old railroad grade along the river surrounded by the scenic canyon walls. The river cut a colorful ribbon through the sagebrush desert. We spotted a heron standing on the river bank apparently watching for small fish.

We spotted quite a few birds along the way as well as some deer making their way up the canyon side. 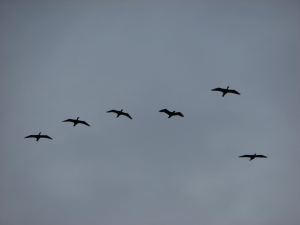 There was also still a number of flowers in bloom along the river. 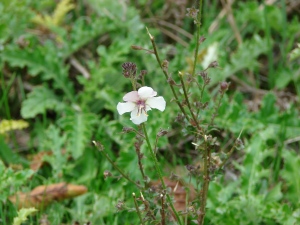 We met Dominique and my parents on the trail earlier than we had expected. They were moving a lot faster than they thought they would be. They gave us some info on what to expect on the trail ahead including to be watching for Scorpion Rock on the Warm Springs Reservation side of the river and a waterfall on our side of the river near a small creek.

Heather and I eventually made it to Mecca Flats where I accused my parents of hitching a boat ride with some of the many fishermen we’d seen. It was the only explanation of how they managed to make it that far that fast ;). We turned around at Mecca Flats and headed back toward our car and my family. Along the way we noticed a scenic red tree growing in the midst of a rock slide and several rock climbers high on the canyon cliffs.

It was a nice relaxing hike and a good time of year for it since the area is known for rattlesnakes in warmer weather. It was also nice to do a hike in the sagebrush landscape of Central Oregon. Ironically enough we were almost due east of our previous hike on the Red Lake Trail in the Mt. Hood National Forest and less than 50 miles as the crow flies. What a difference location and elevation makes. Happy Trails!