What a difference a week can make this time of year. Our previous hike had been up Cooper Spur on Mt. Hood on a beautiful (albeit chilly) day with mountain views in every direction. One week later we found ourselves on a snow covered trail in the Three Sisters Wilderness while hiking to the 7251′ summit of Black Crater.

We were actually in Central Oregon to celebrate our Son’s 21st birthday, but had wanted to fit a hike in as well. As it turned out Dominique really wanted to go on a hike with us which was nice because we hadn’t gotten to hike with him since August 1st, 2015 when we visited Salishan Spit prior to our annual family reunion.

We chose Black Crater due to it’s relatively short distance (a little over 7 mile round trip) and proximity to my parents house. The forecast was for a chance of snow showers which had evidently started the night before because the top portion of Black Crater was white as we headed toward Sisters, OR that morning. The trailhead is located near milepost 80 along the McKenzie Highway 242 just beyond the signed Windy Viewpoint coming from Sisters. 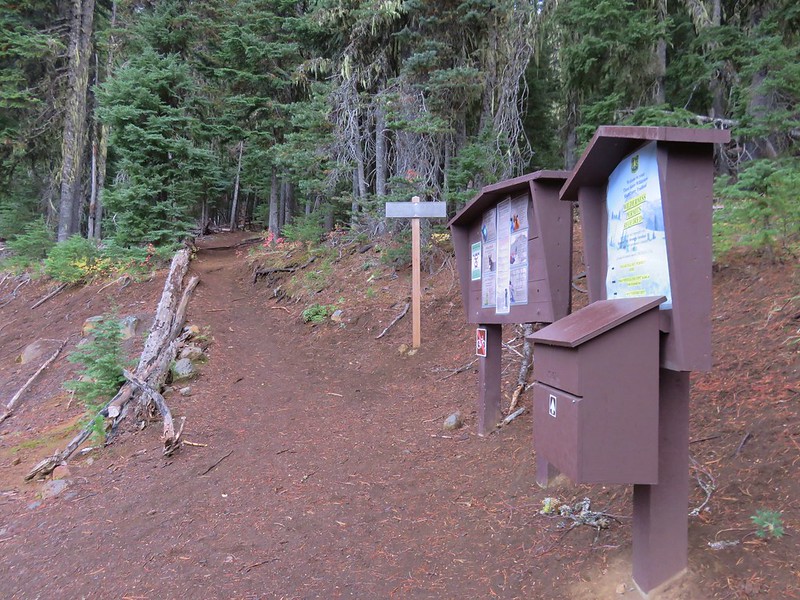 A light rain was falling at the trailhead but not enough to make us put on any rain gear. The trail almost immediately entered the Three Sisters Wilderness and began the steady 2500′ climb to the summit. 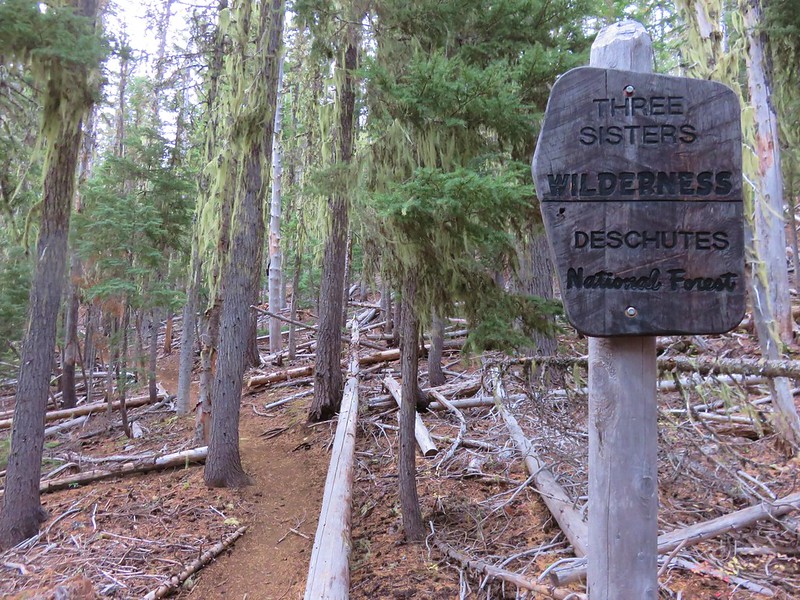 On a clearer day Mt. Washington would have been visible beyond a lava flow at a viewpoint after .3 miles but the clouds were staying low to the NW so we enjoyed the forest scenery instead. 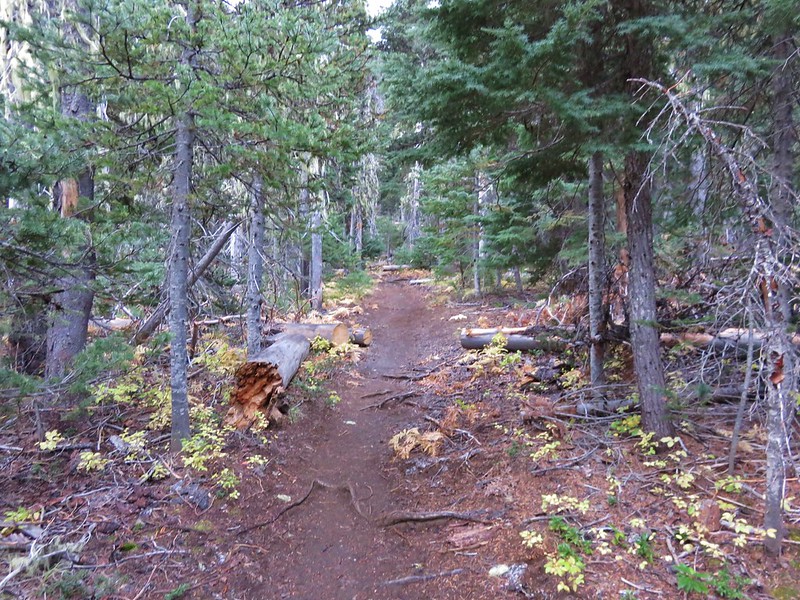 The light rain had quickly turned to a light snow and as we gained elevation we began to see more and more of it along the trail. 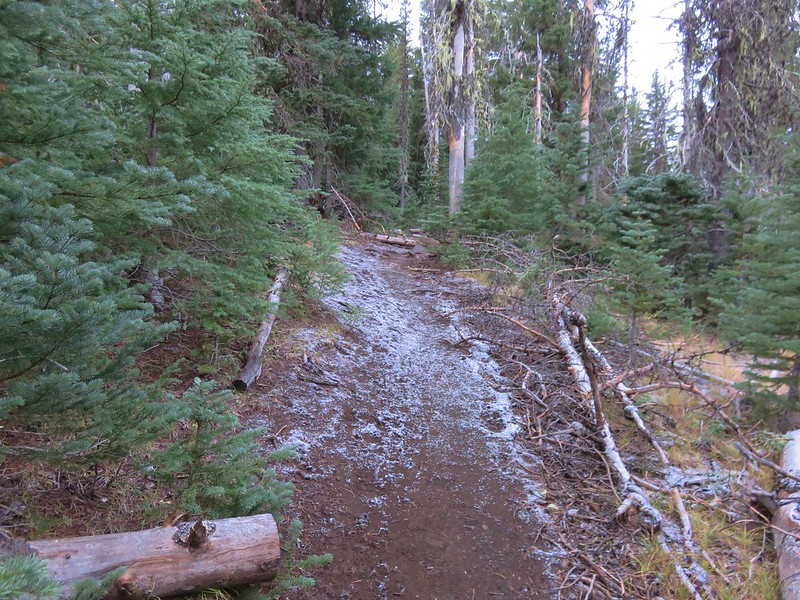 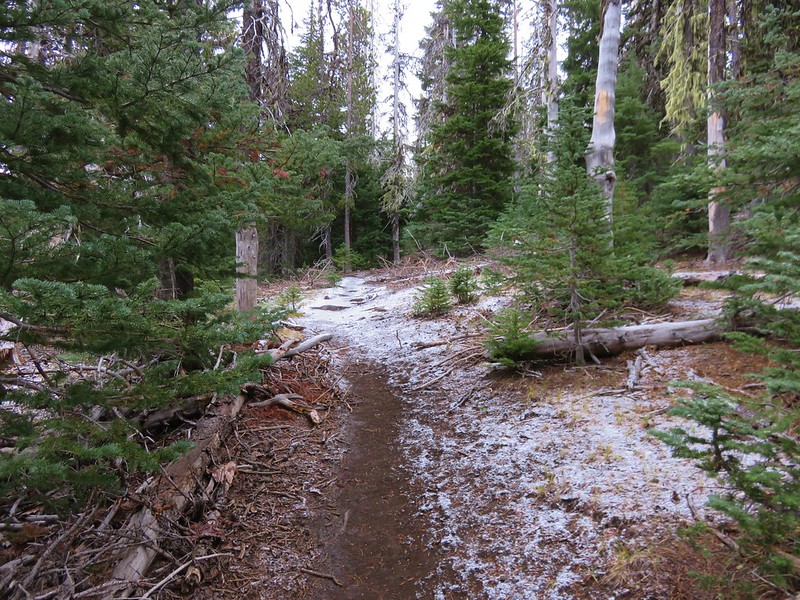 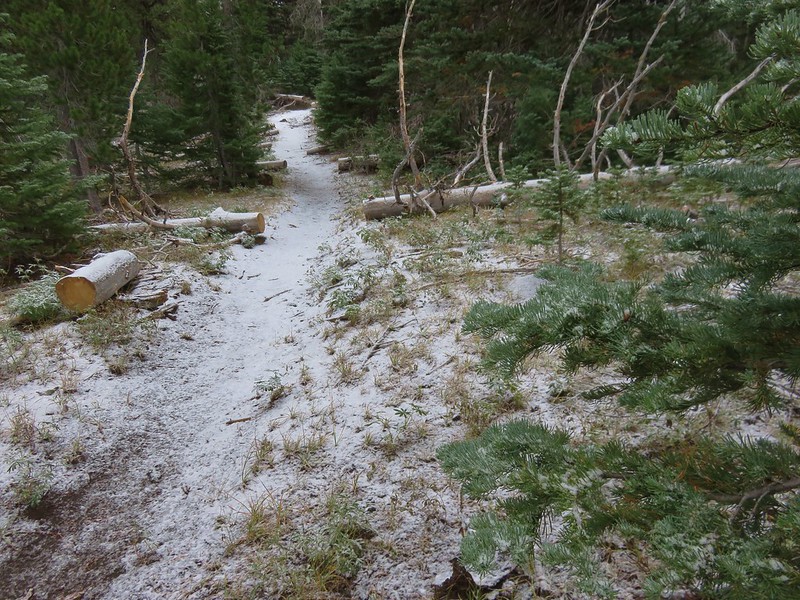 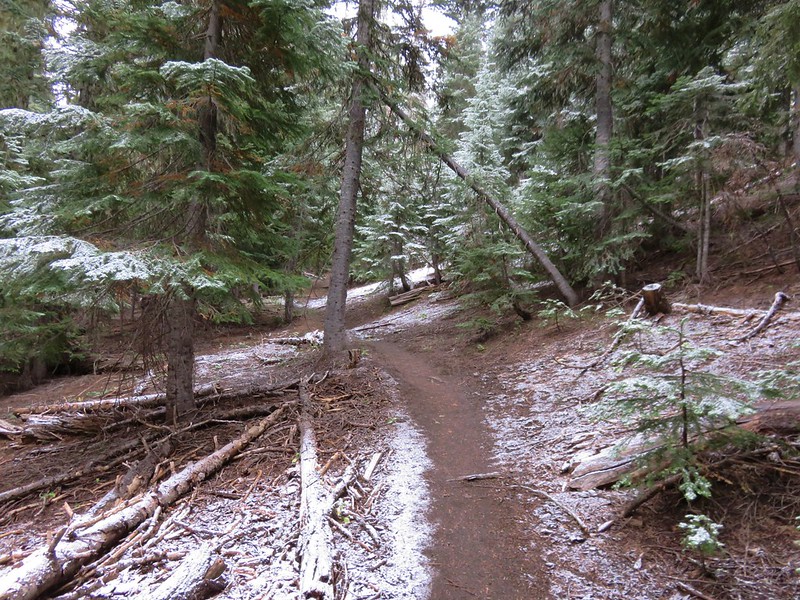 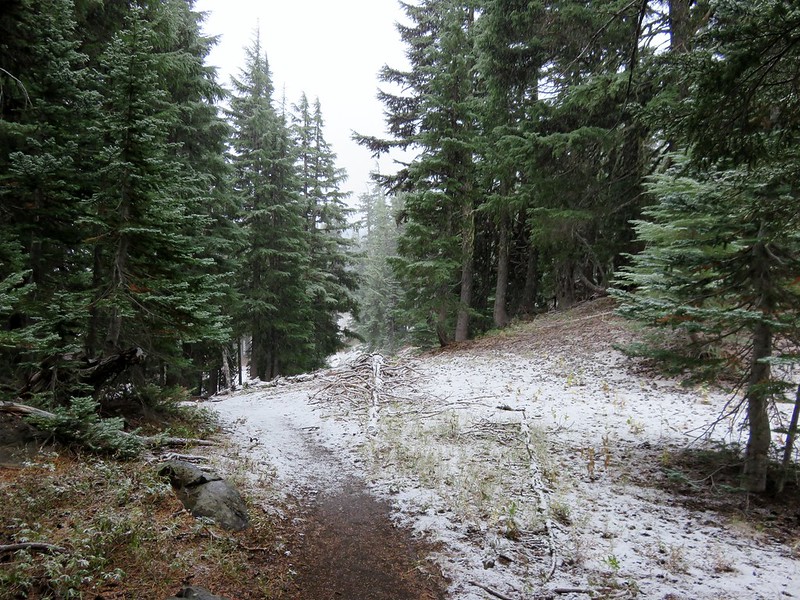 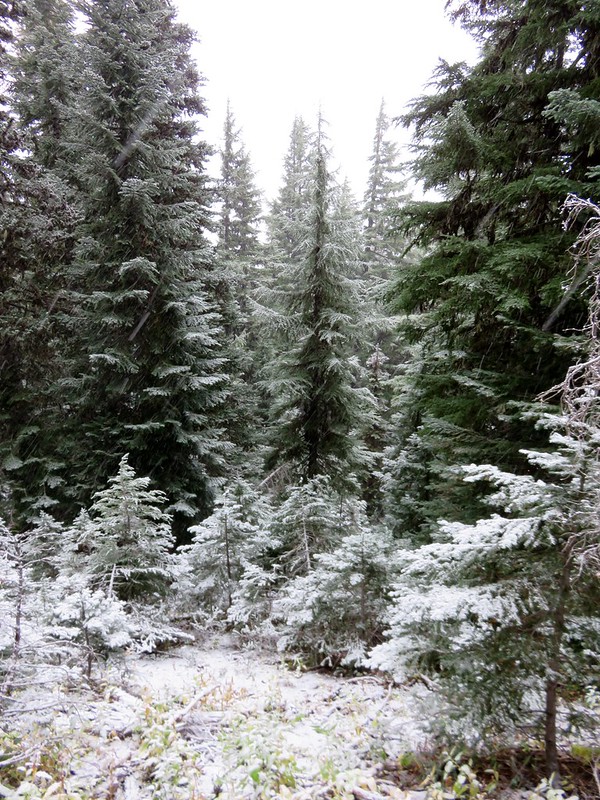 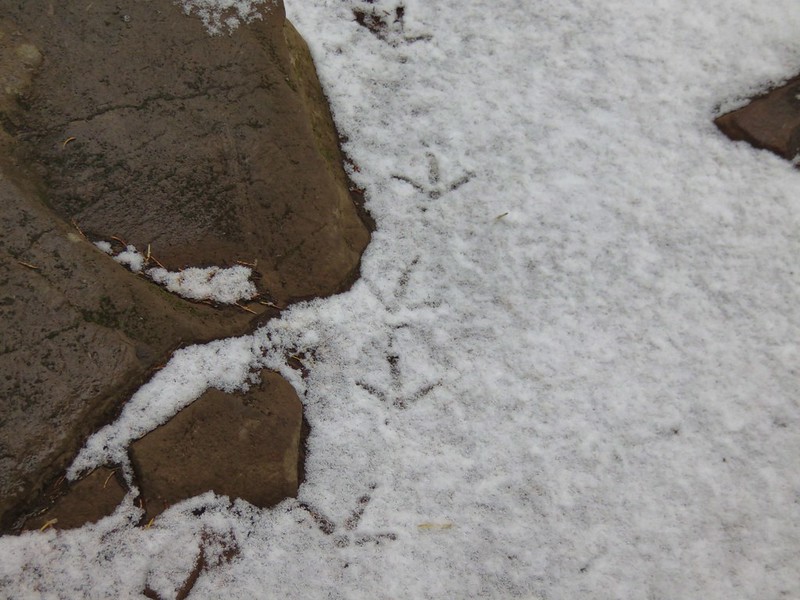 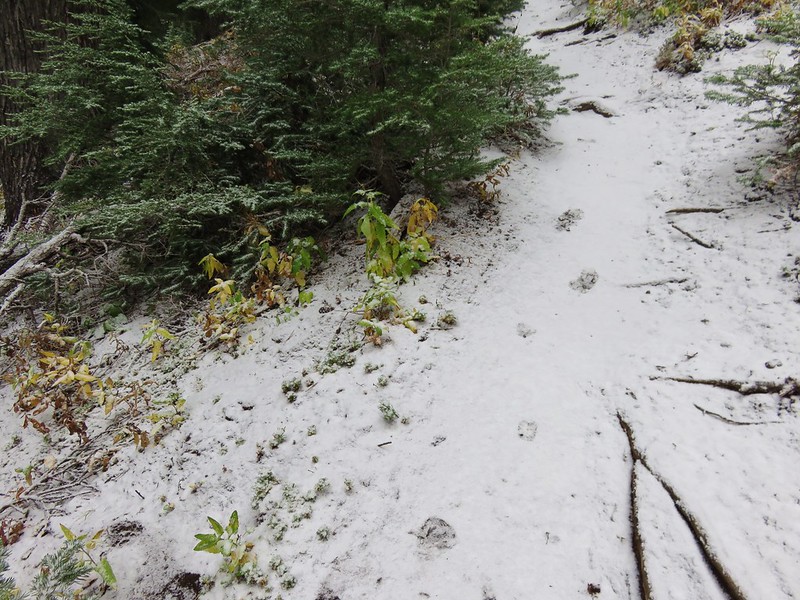 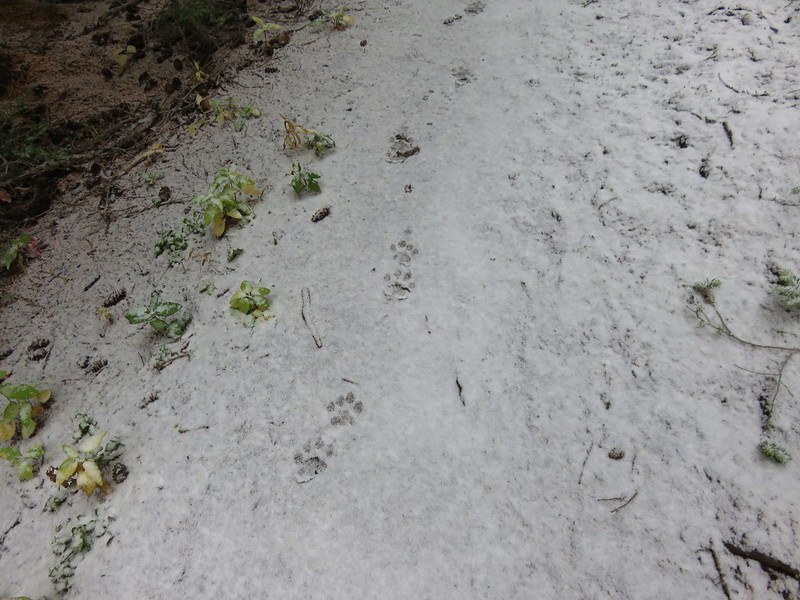 After 2 miles of climbing the trail traversed a glacially carved valley with some open meadows. 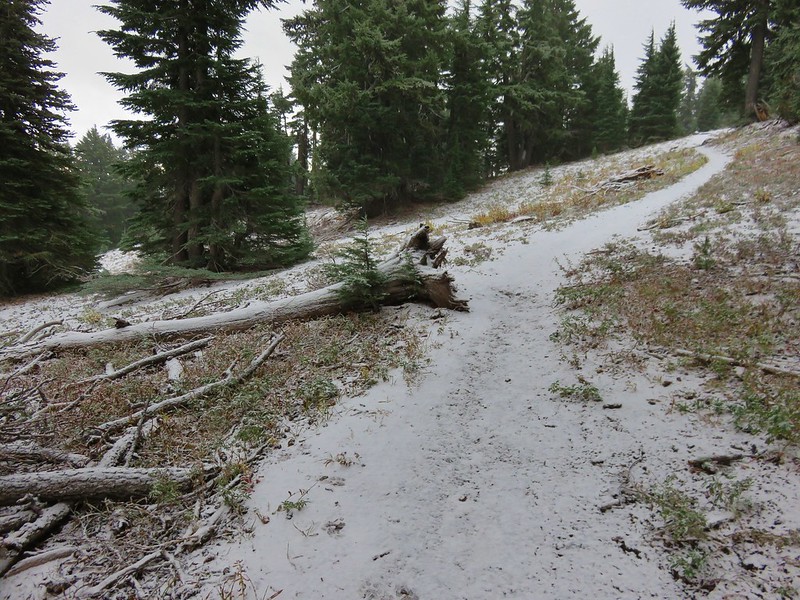 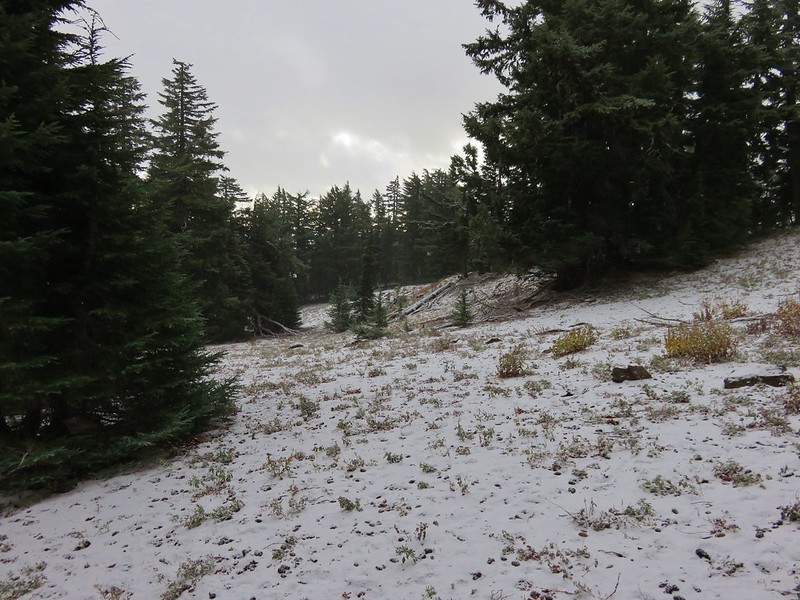 We were now winding around the east side of Black Crater where the clouds were not blocking all the views. 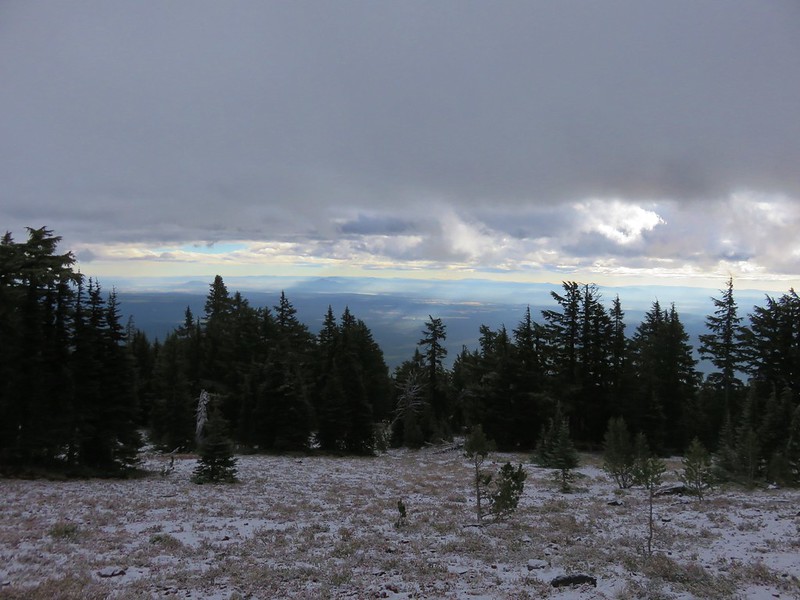 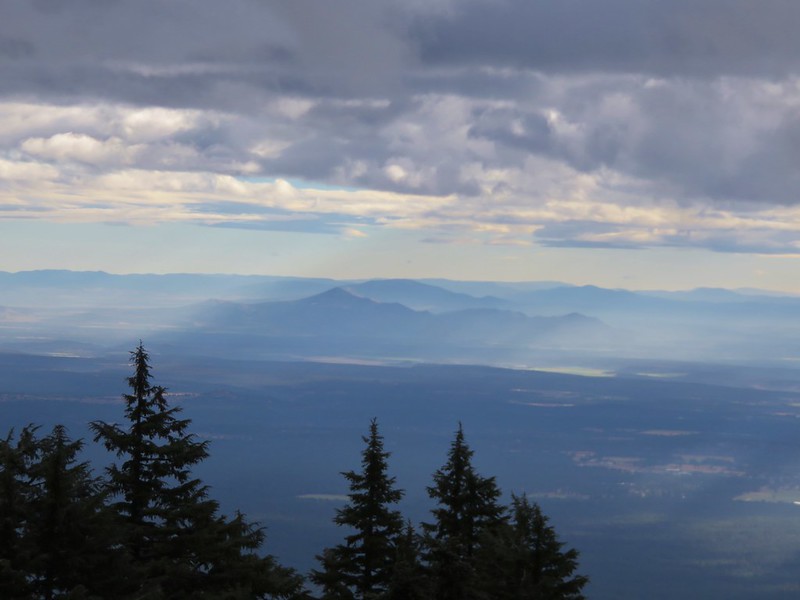 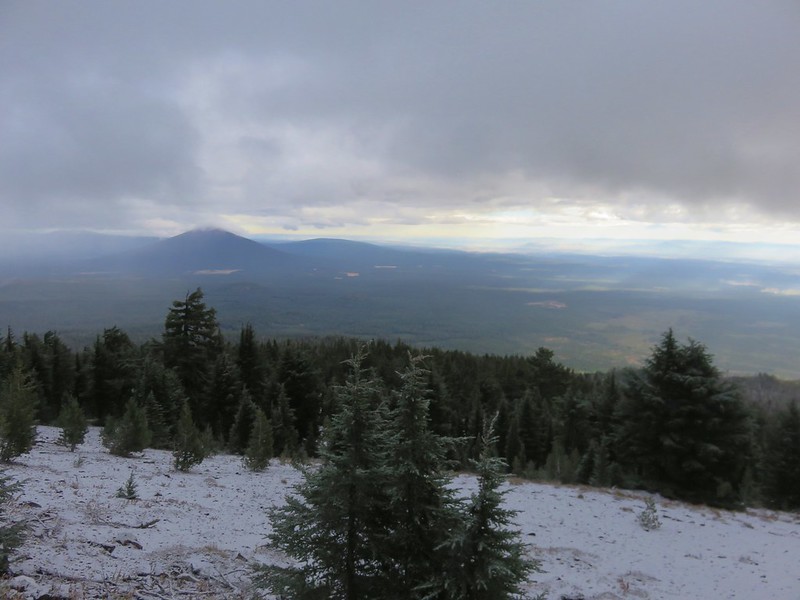 After .7 miles we arrived at the far side of the valley and turned uphill on a series of switchbacks toward the cinder cone’s summit. 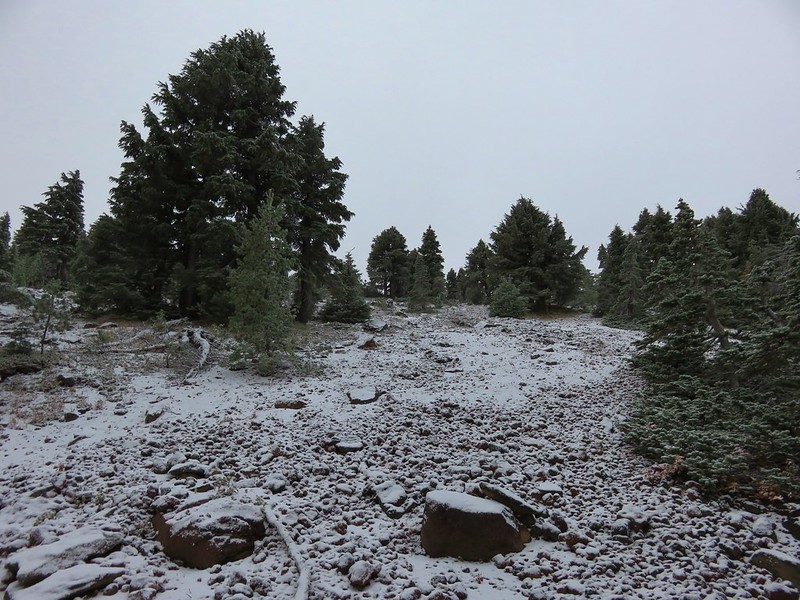 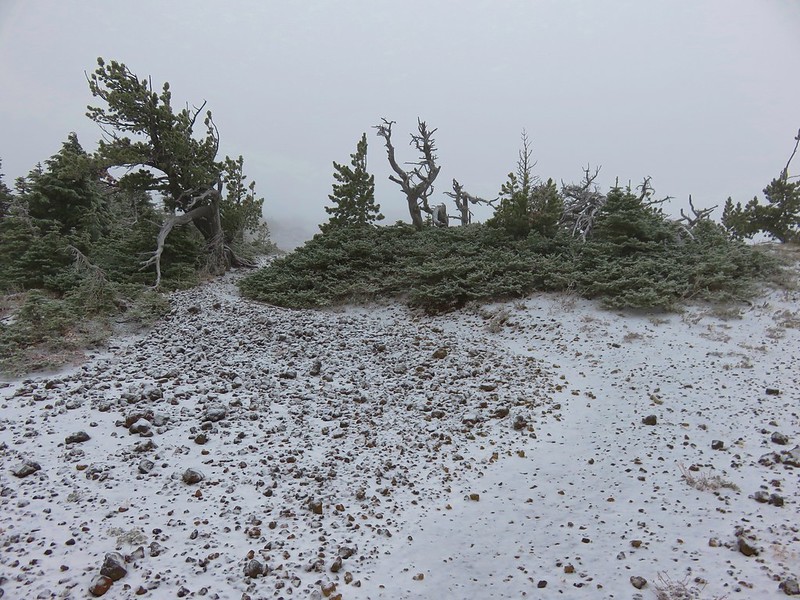 Shortly before reaching the summit the trail crossed a barren plateau where we found ourselves in the middle of the clouds. 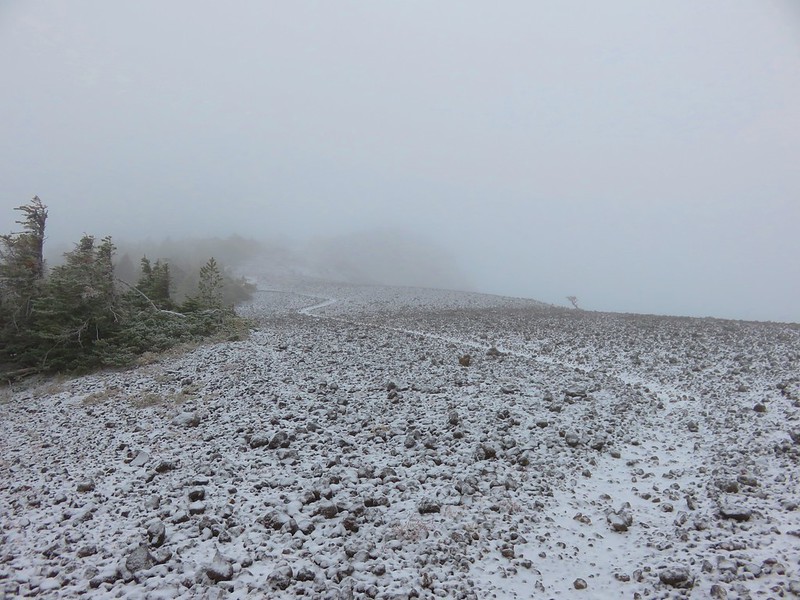 Heather and Dominique crossing the plateau. 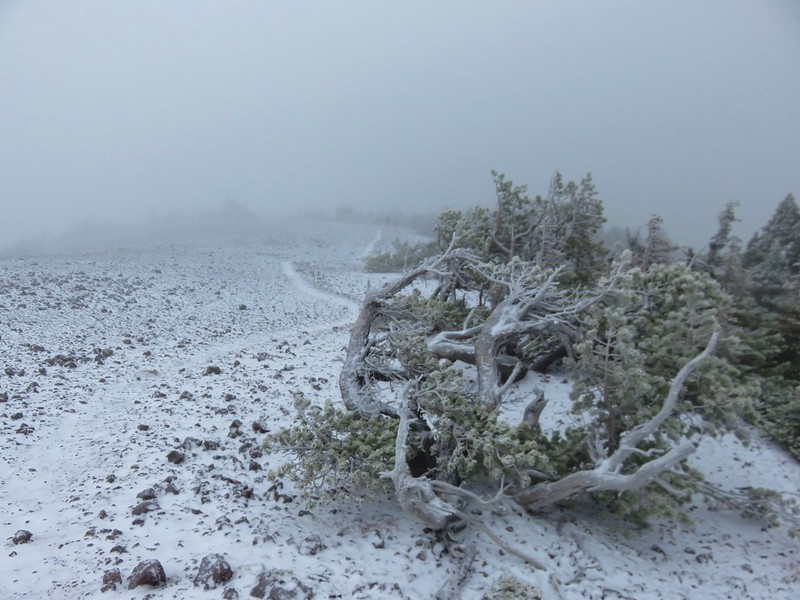 The wind was really blowing as we explored the summit’s rocky crag. 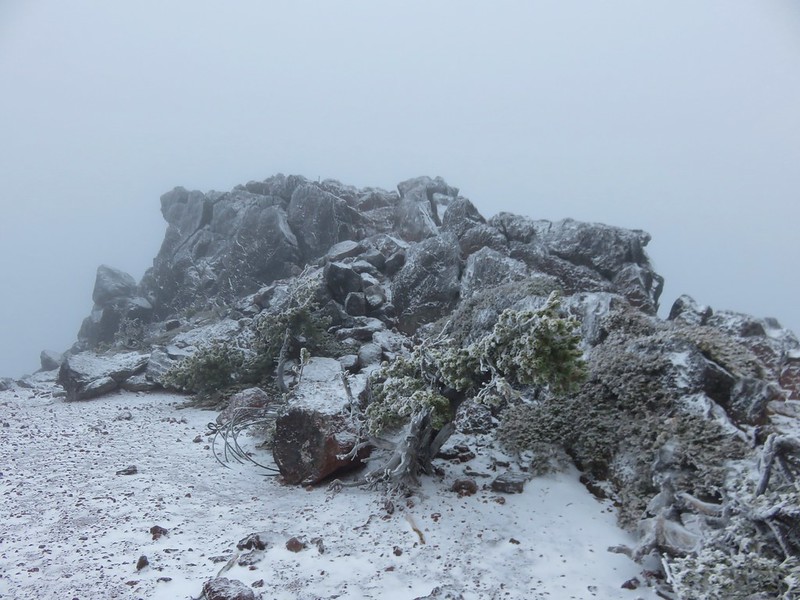 Remnants remained where a former lookout tower sat perched on the rocks. 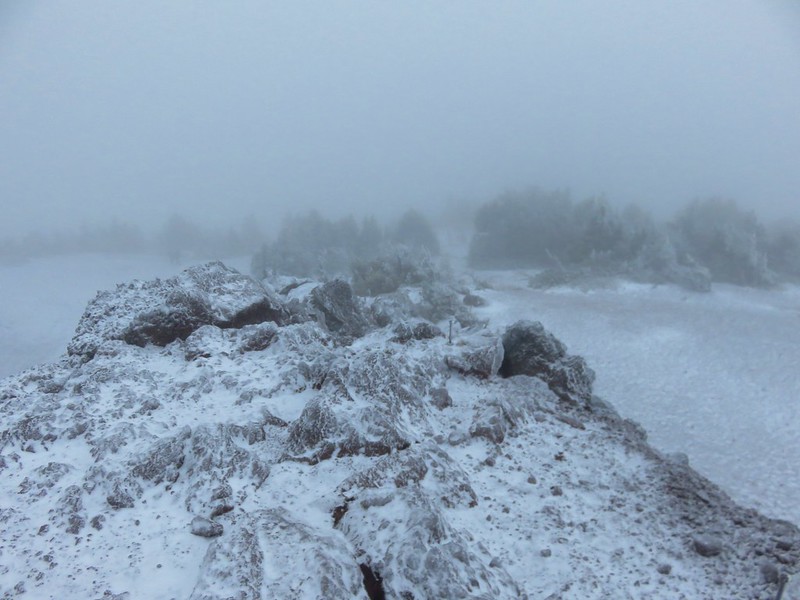 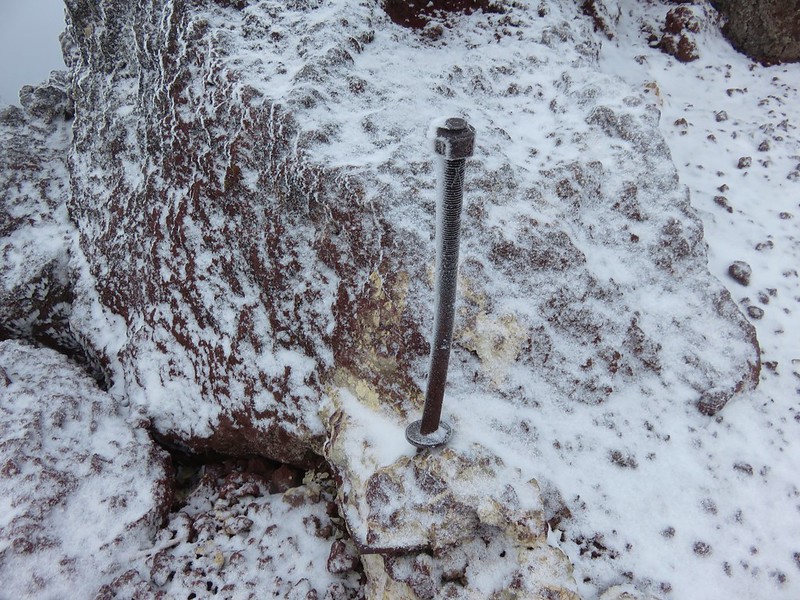 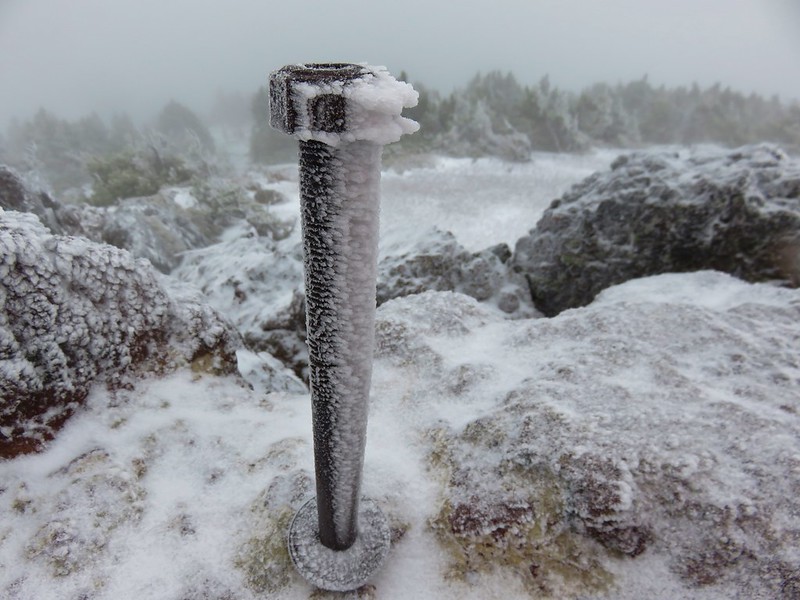 We headed back across the plateau and met the first of a half dozen or so hikers on their way up the trail. We saw them all before we’d finished coming down the switchbacks and then never saw another hiker until we were back at the trailhead. The snow continued to fall most of the way back down but it was not accumulating and much of the snow that had been along the lower portions of the trail was gone by the time we passed again. 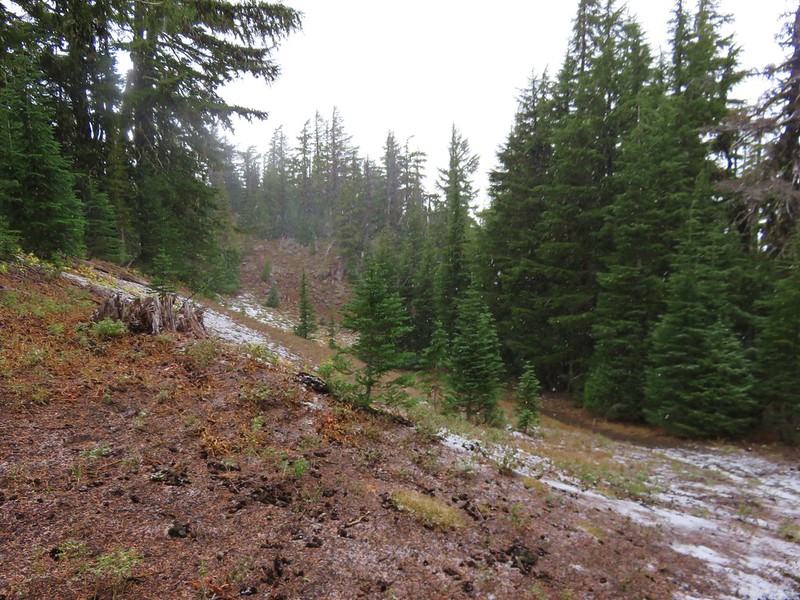 We were on our way back to my parent’s house shortly after 11am where Dad had pancakes, bacon, and eggs waiting. Happy Trails!

[…] After visiting the southern end of the cones we made our way to the northern end. Mt. Washington, Three Fingered Jack, Mt. Jefferson, Mt. Hood, and Black Crater (post) […]