The second day of vacation we left Gold Beach and headed toward Agness of Jerry’s Flat Road aka NF-33. Our plan for the day was to visit Hanging Rock in the Wild Rogue Wilderness and to revisit Elk Creek Falls to retake the pictures we’d lost when I threw the camera into the Coquille River the day before. When we drove past the Coquille River Falls Trailhead on our way out Road 3348 I gave one last goodbye to the camera.

We began our hike at the Buck Point Trailhead.

The trail climbed for a mile around Buck Point to a spring at the head of Buck Creek. 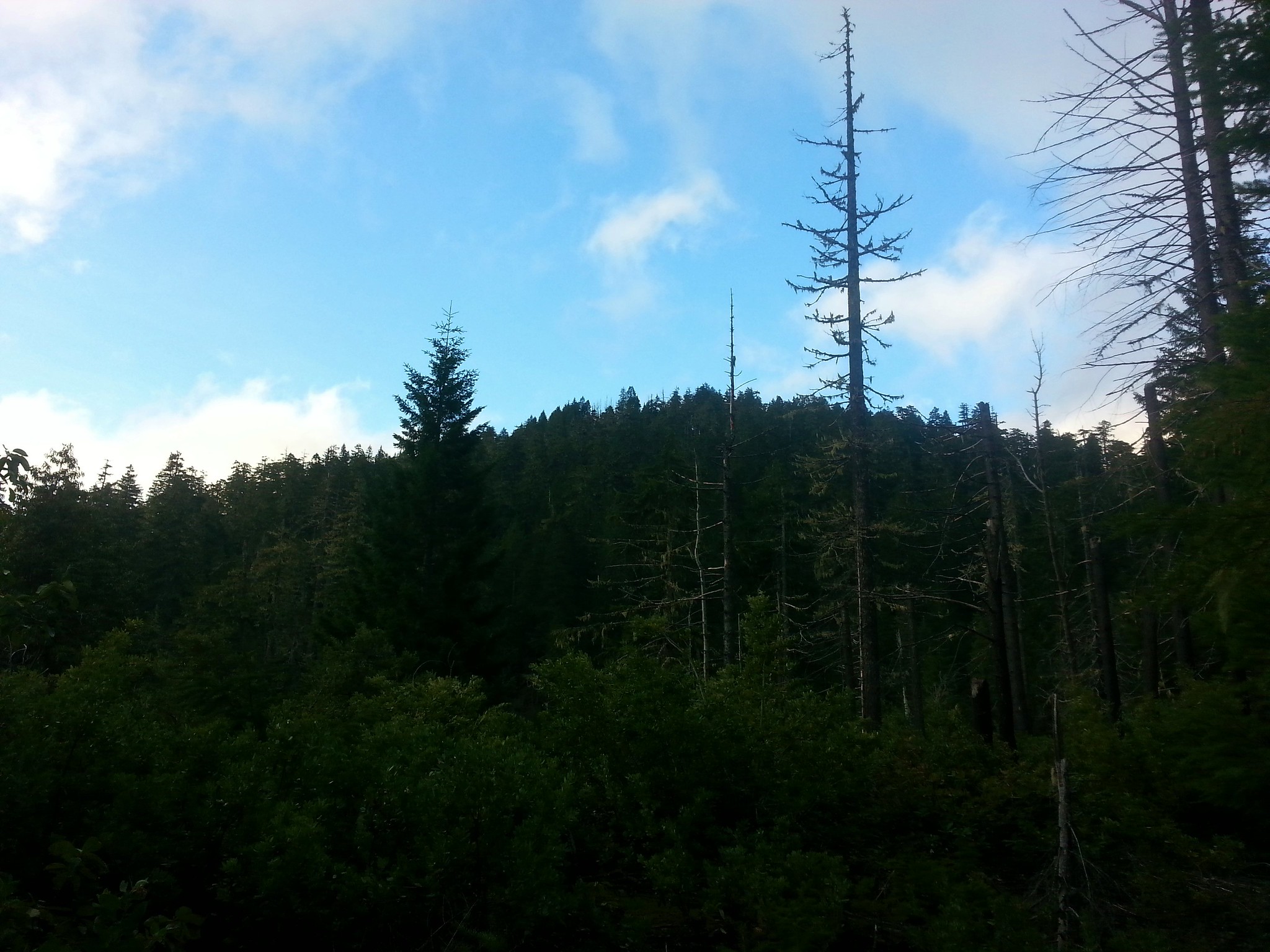 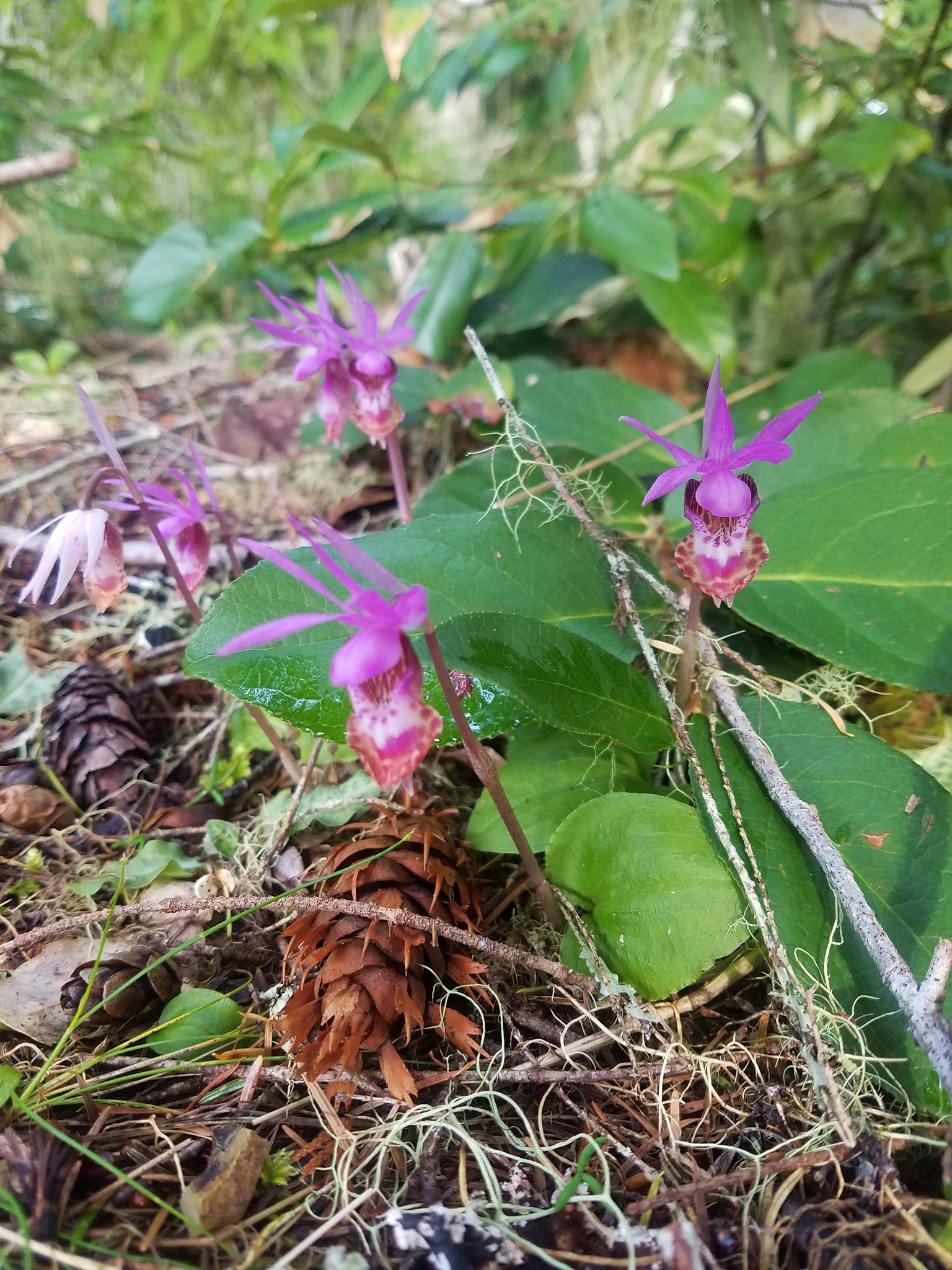 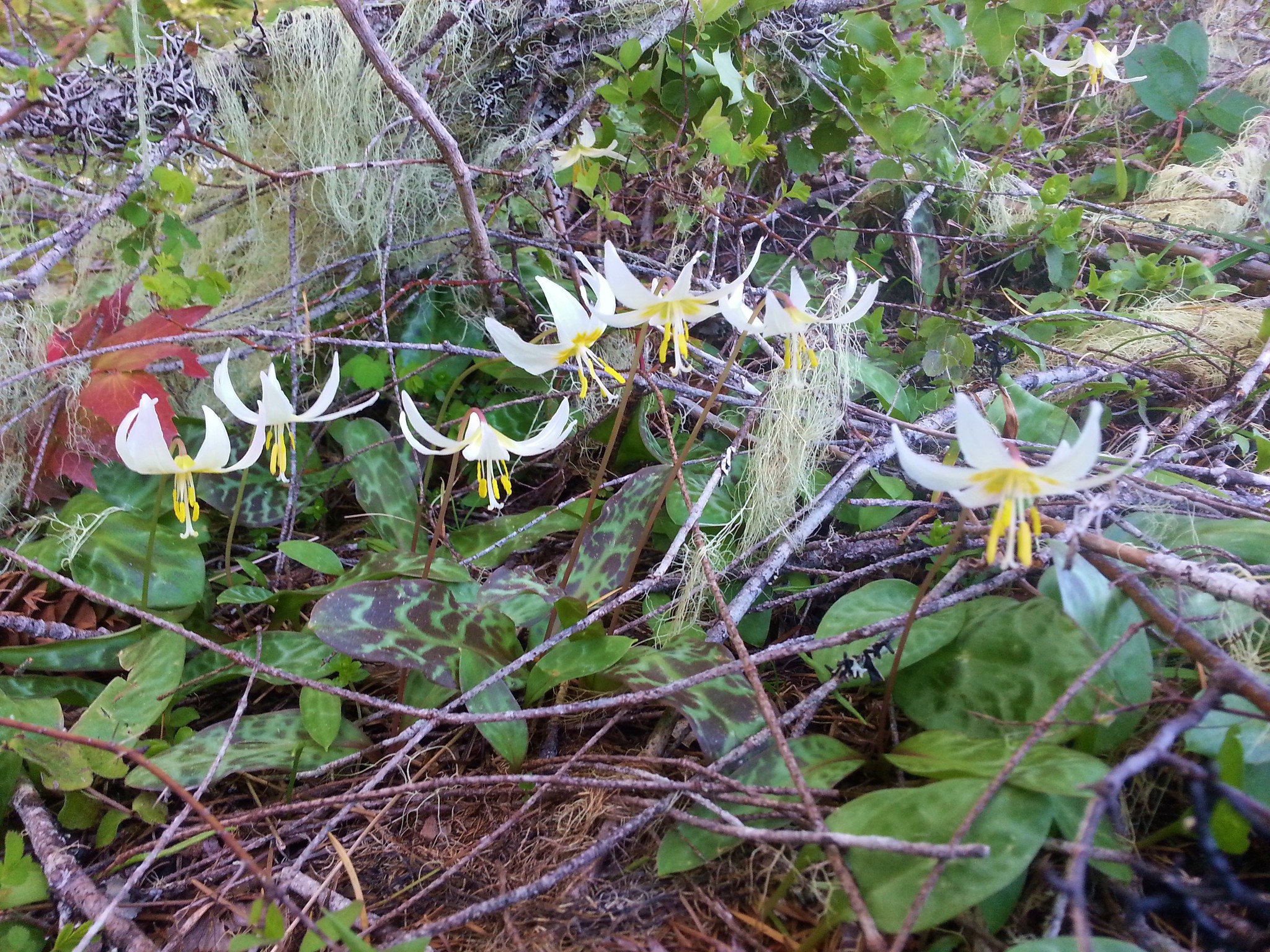 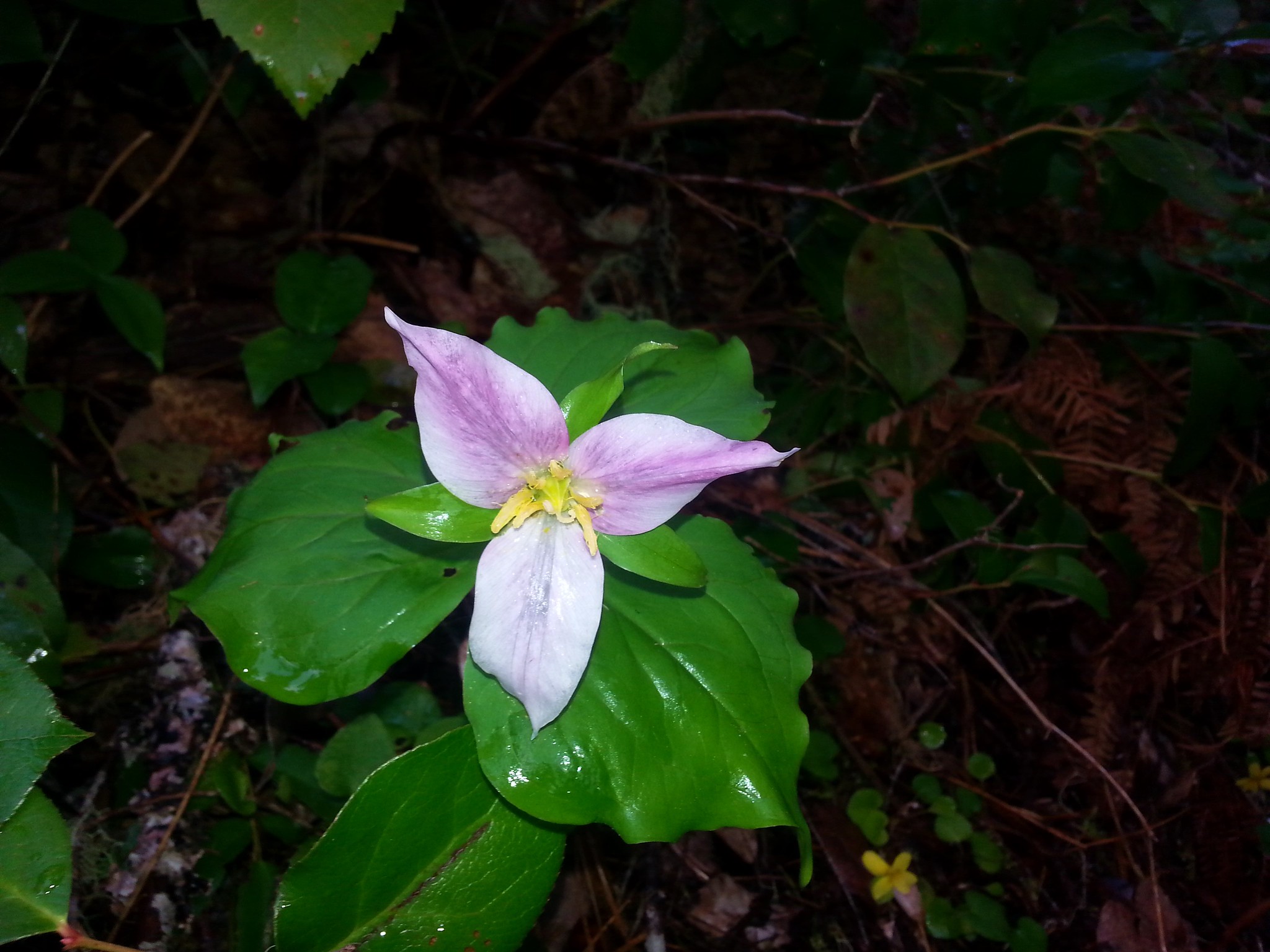 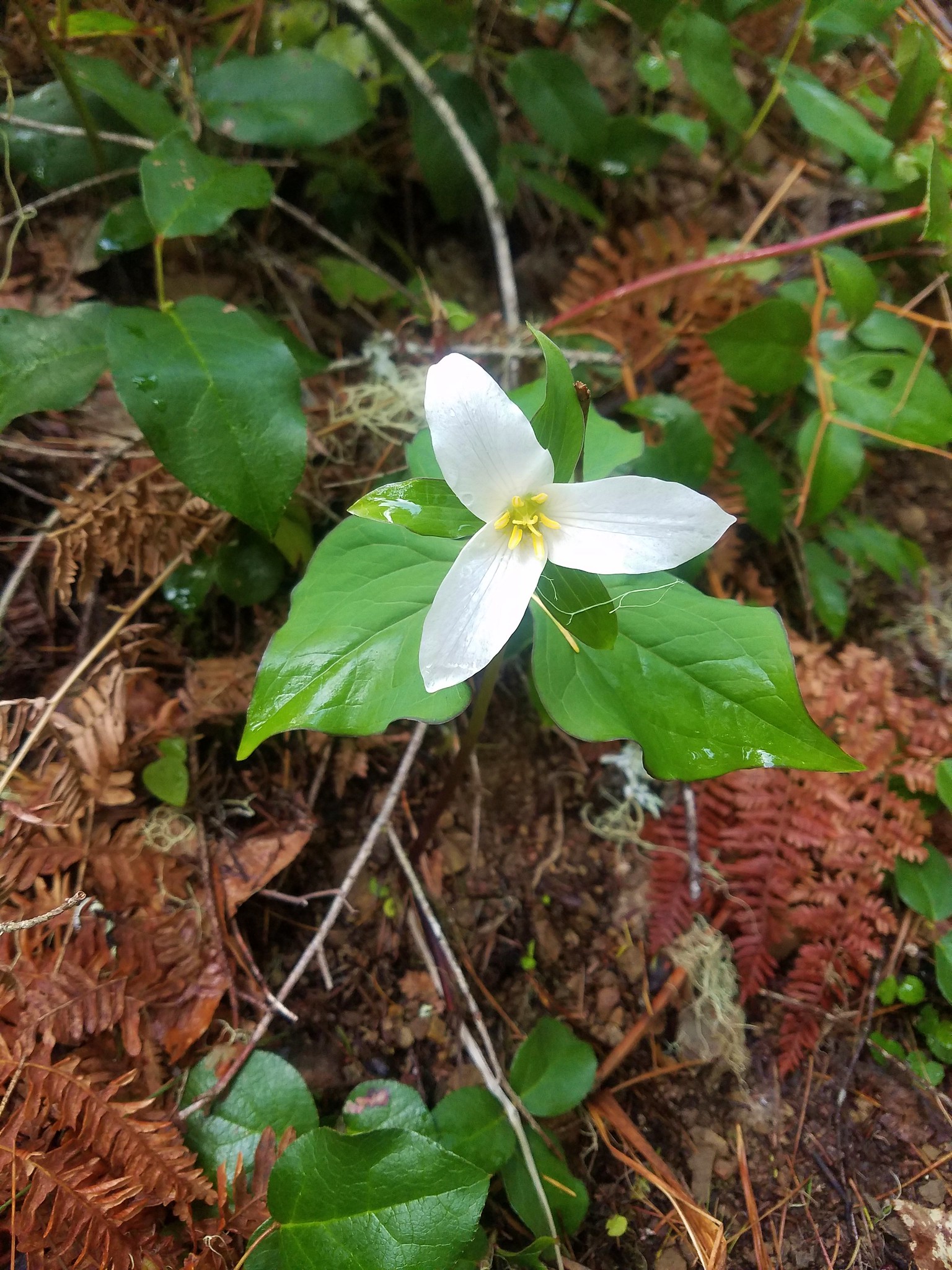 Just over half a mile from the spring the unsigned Hanging Rock Trail split off to the left. We were planning on continuing along the Panther Ridge Trail to make it a longer hike than the 4 mile round trip out to Hanging Rock and back so we decided to save the side trip until later when the sun would be more overhead and not interfering with the view east from the rock. The Panther Ridge Trail followed the rim of Panther Ridge up and down through a variety of scenery. 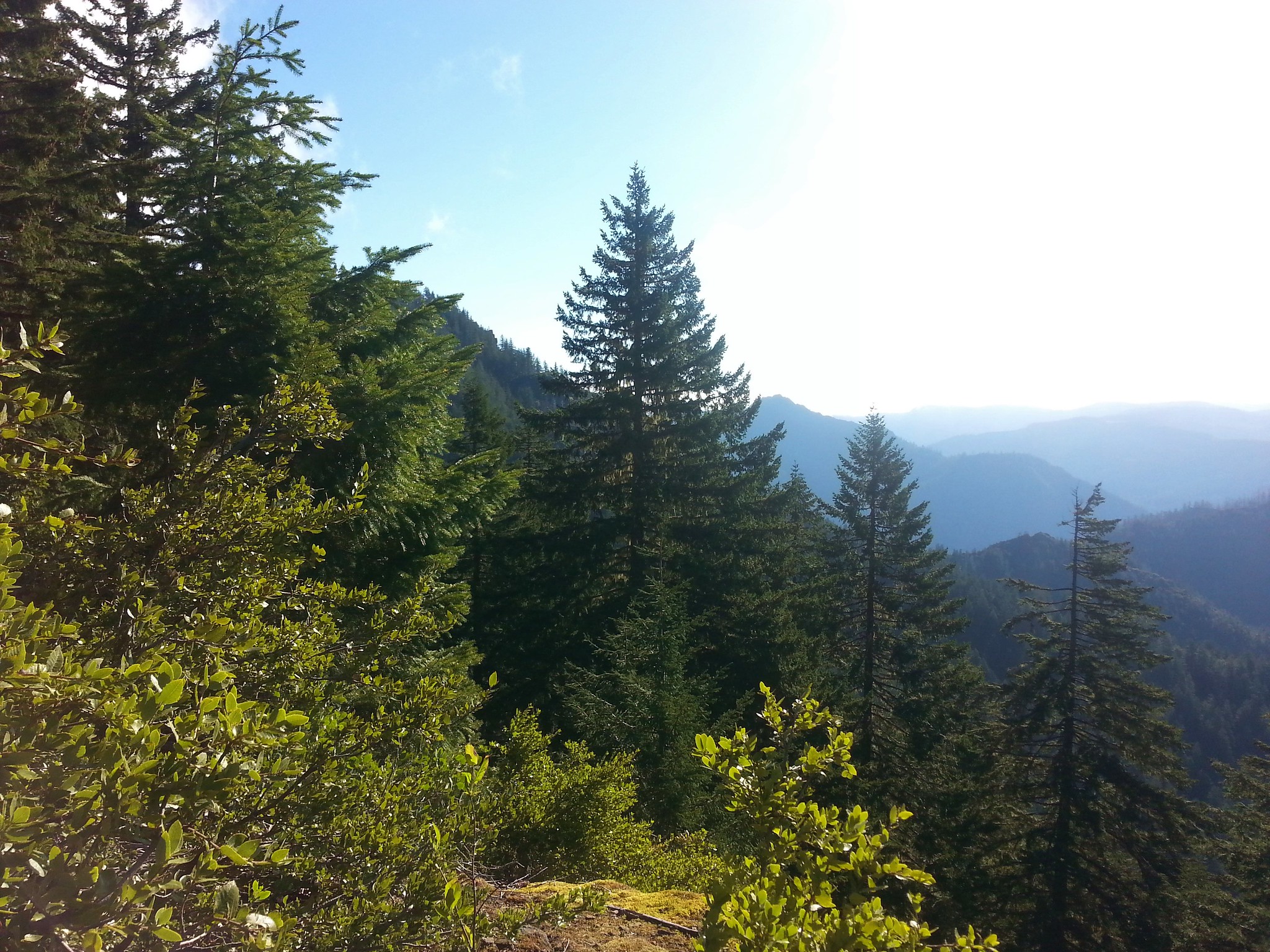 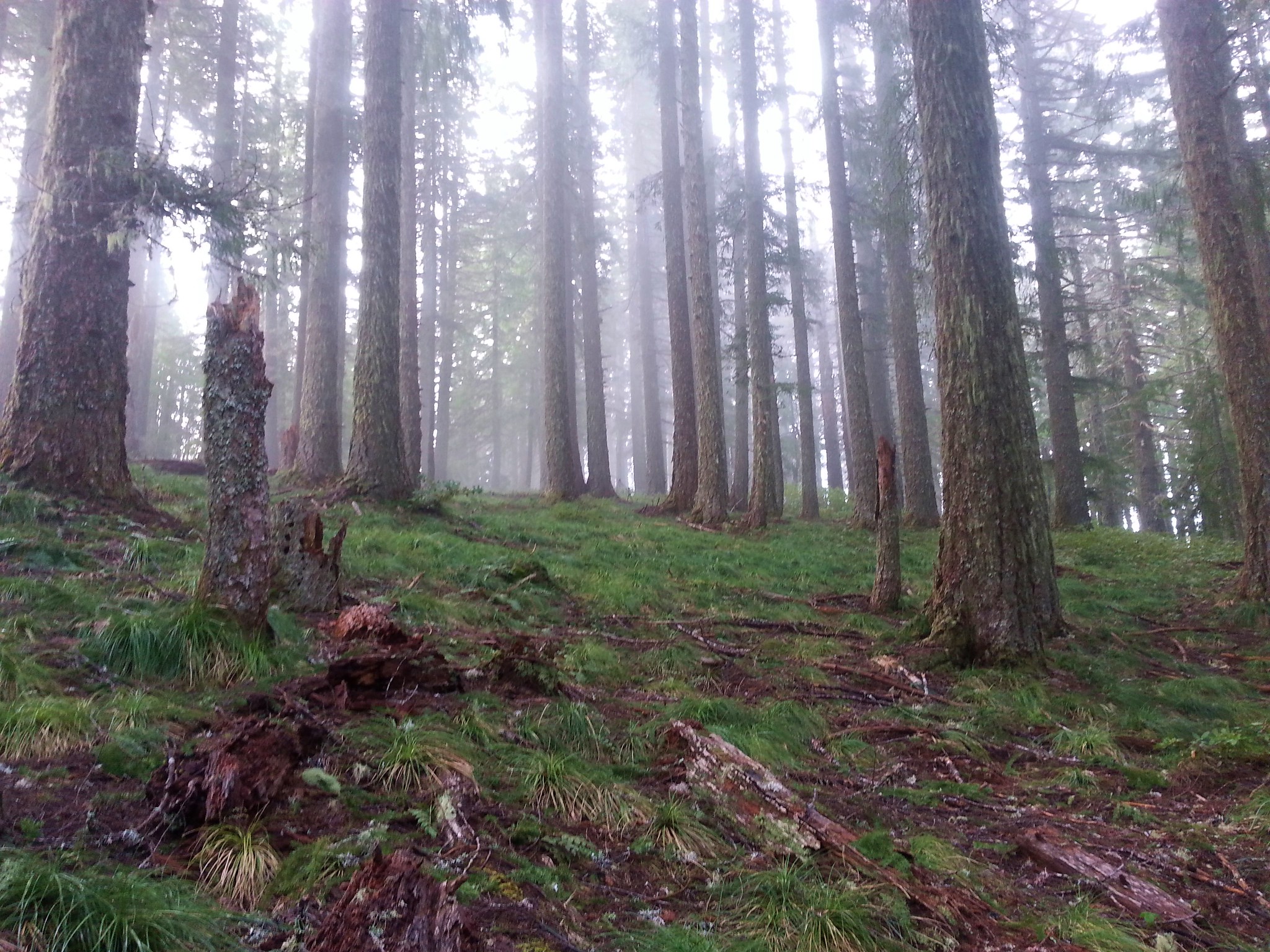 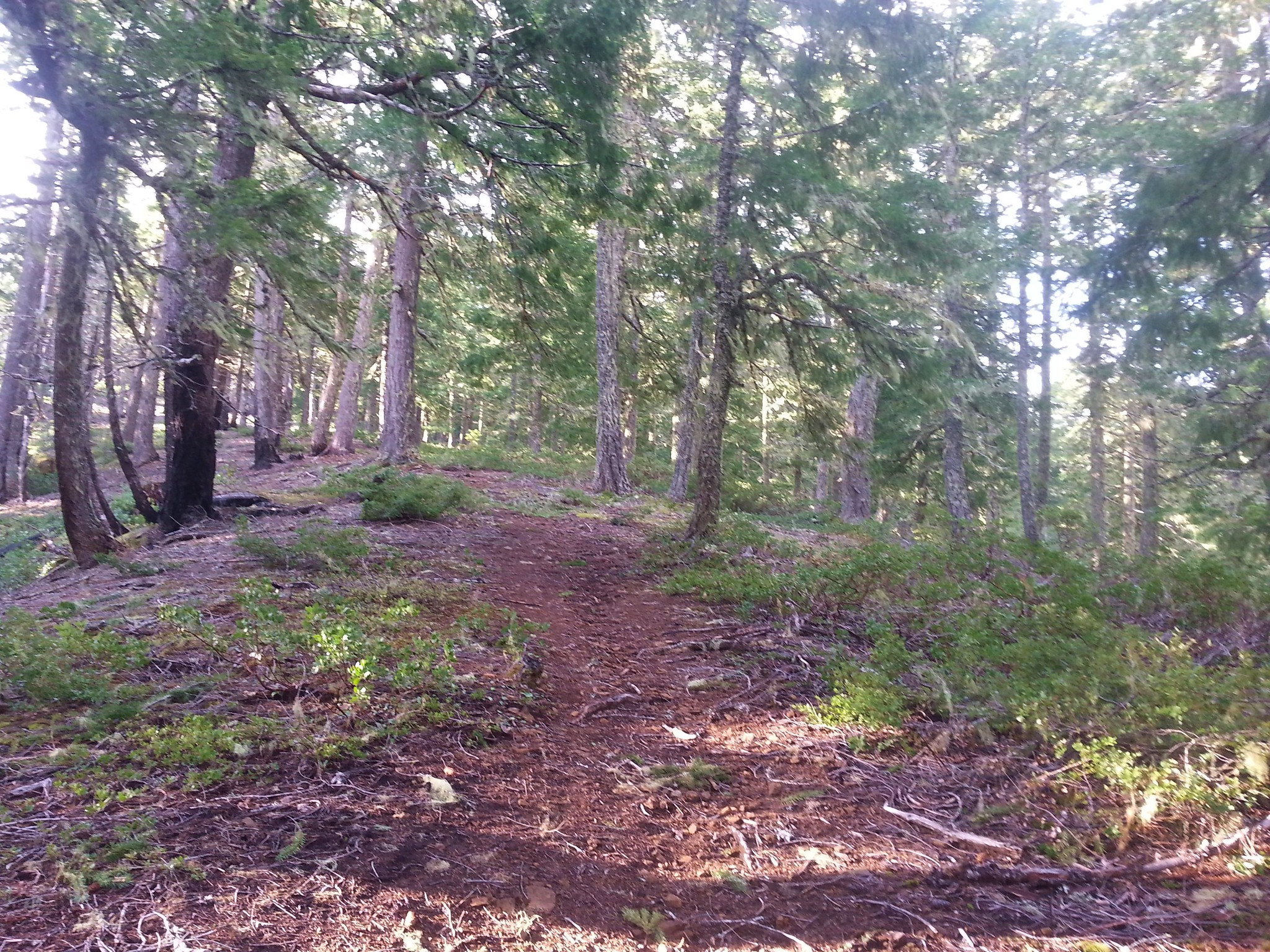 Approximately 2.7 miles north of the Hanging Rock Trail we reached the signed cutoff for Panther Camp. 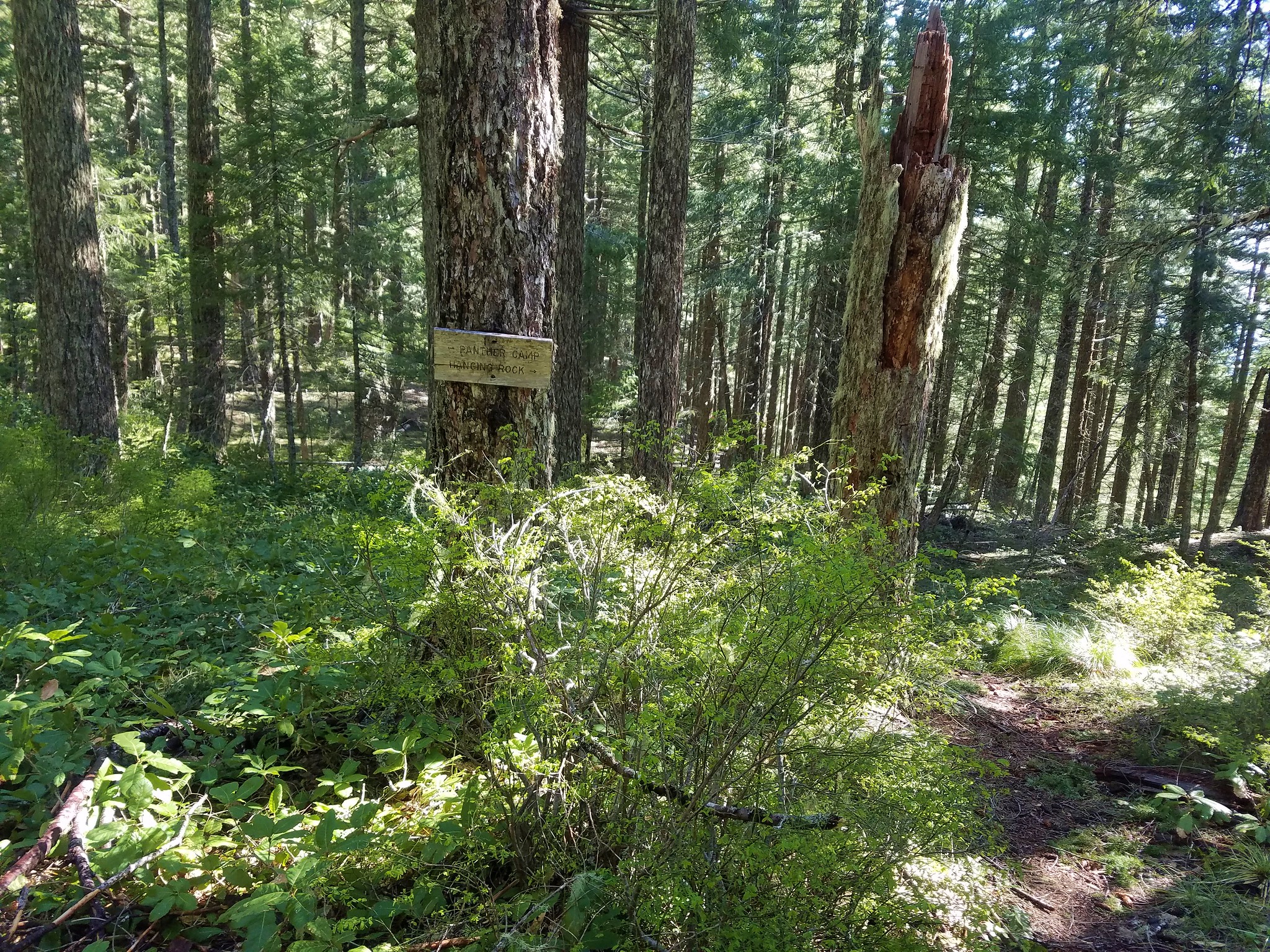 We continued on passing through a beargrass meadow and a dry section of trail lined with manzanita. 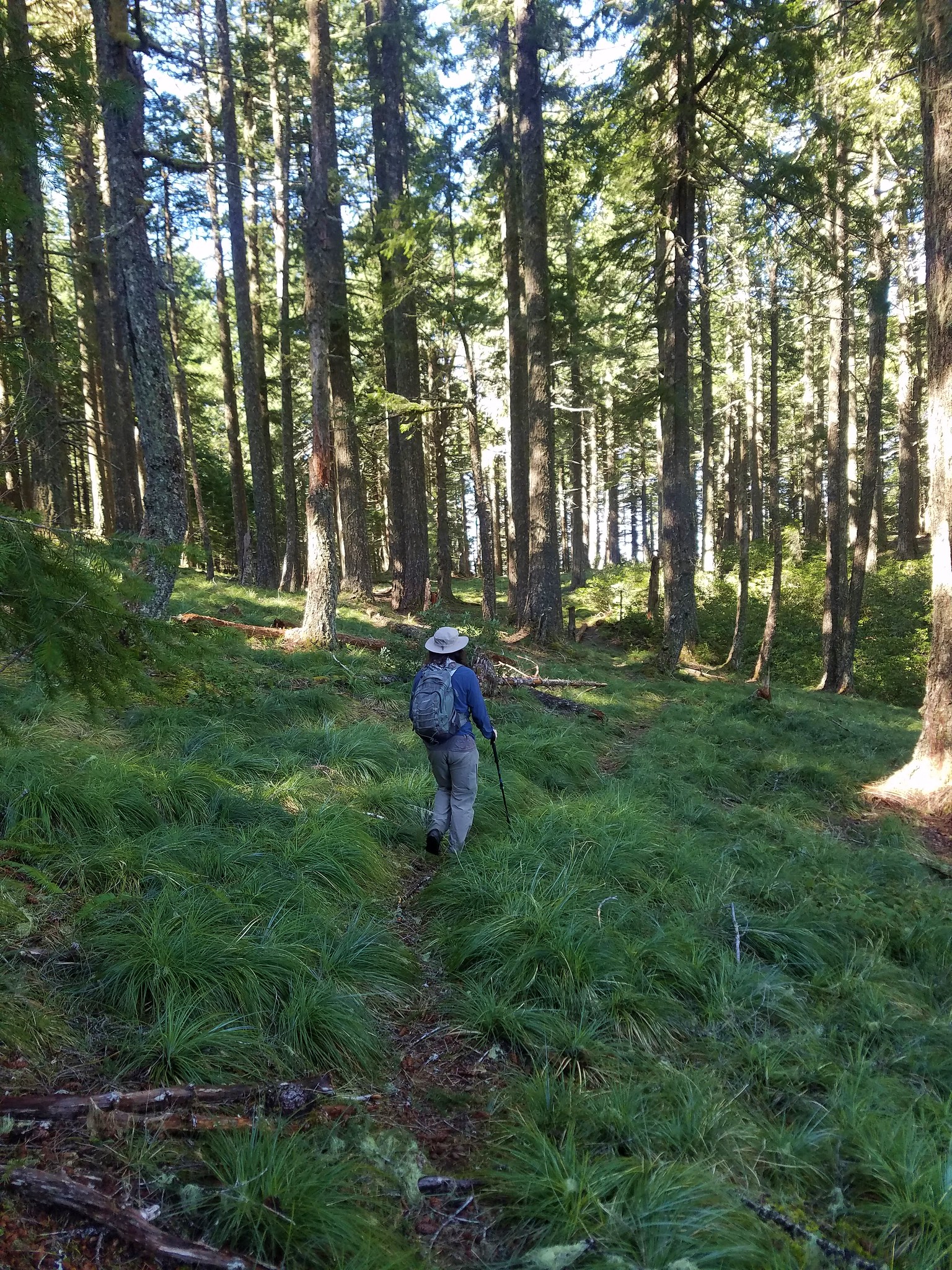 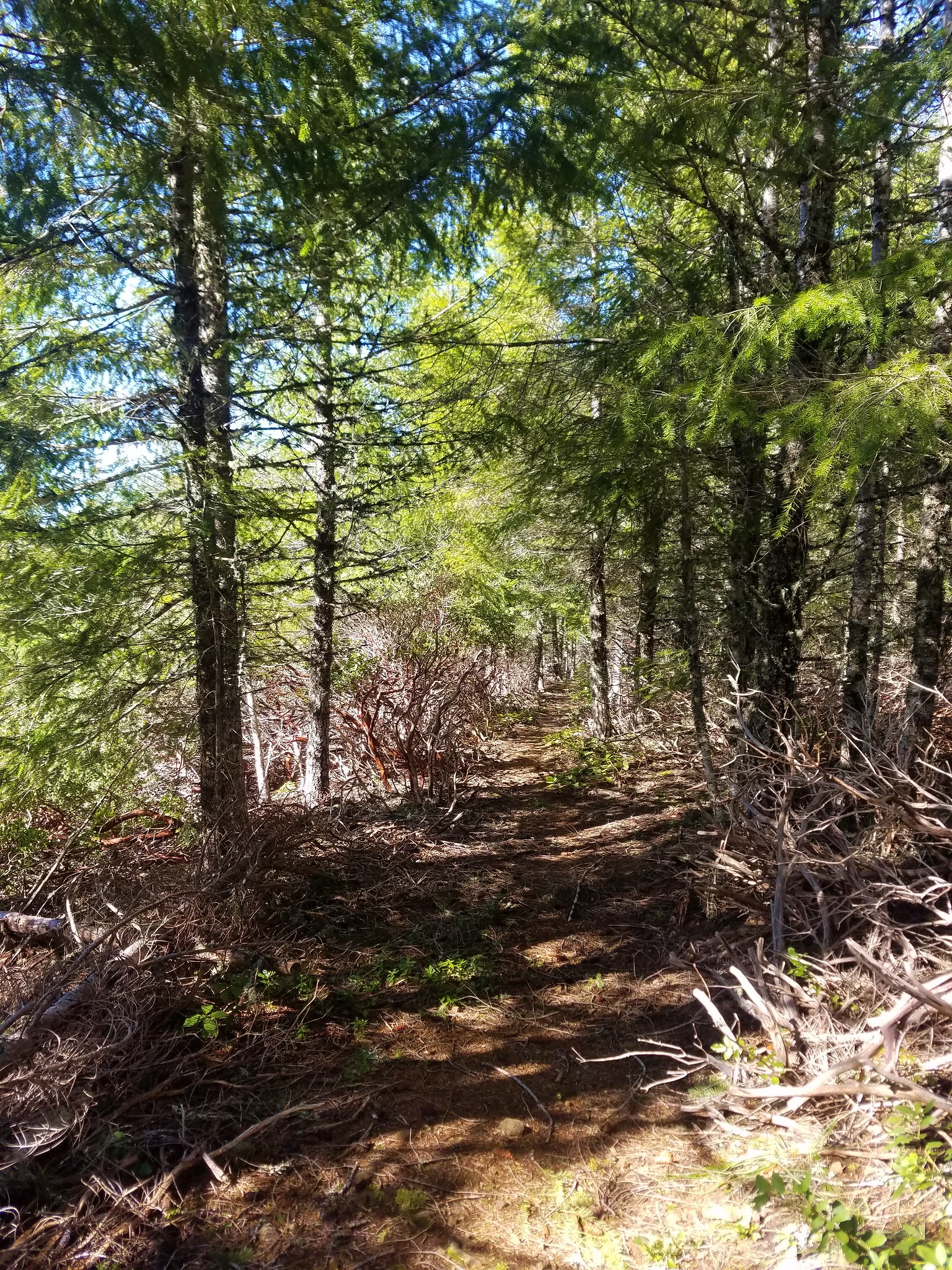 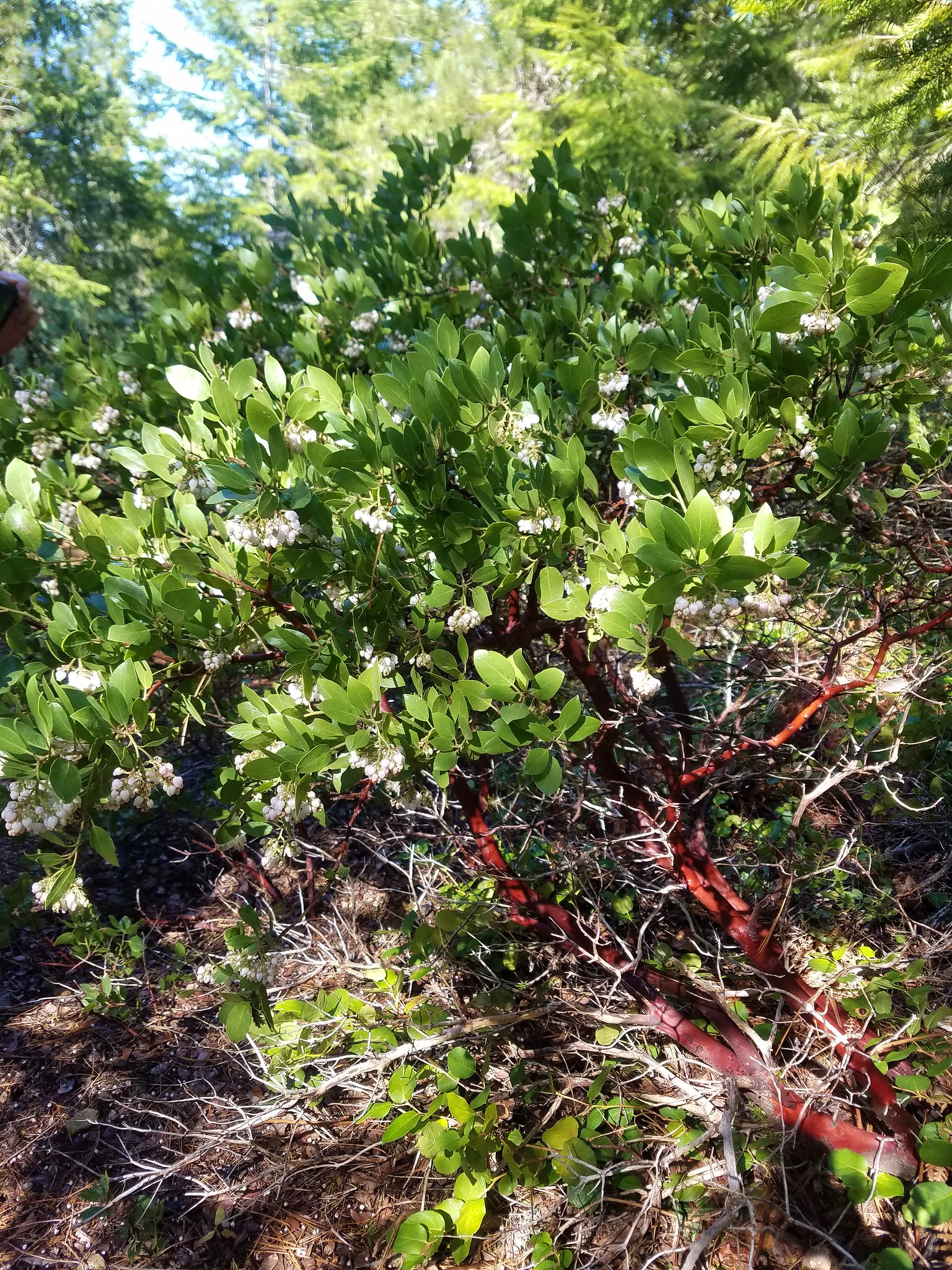 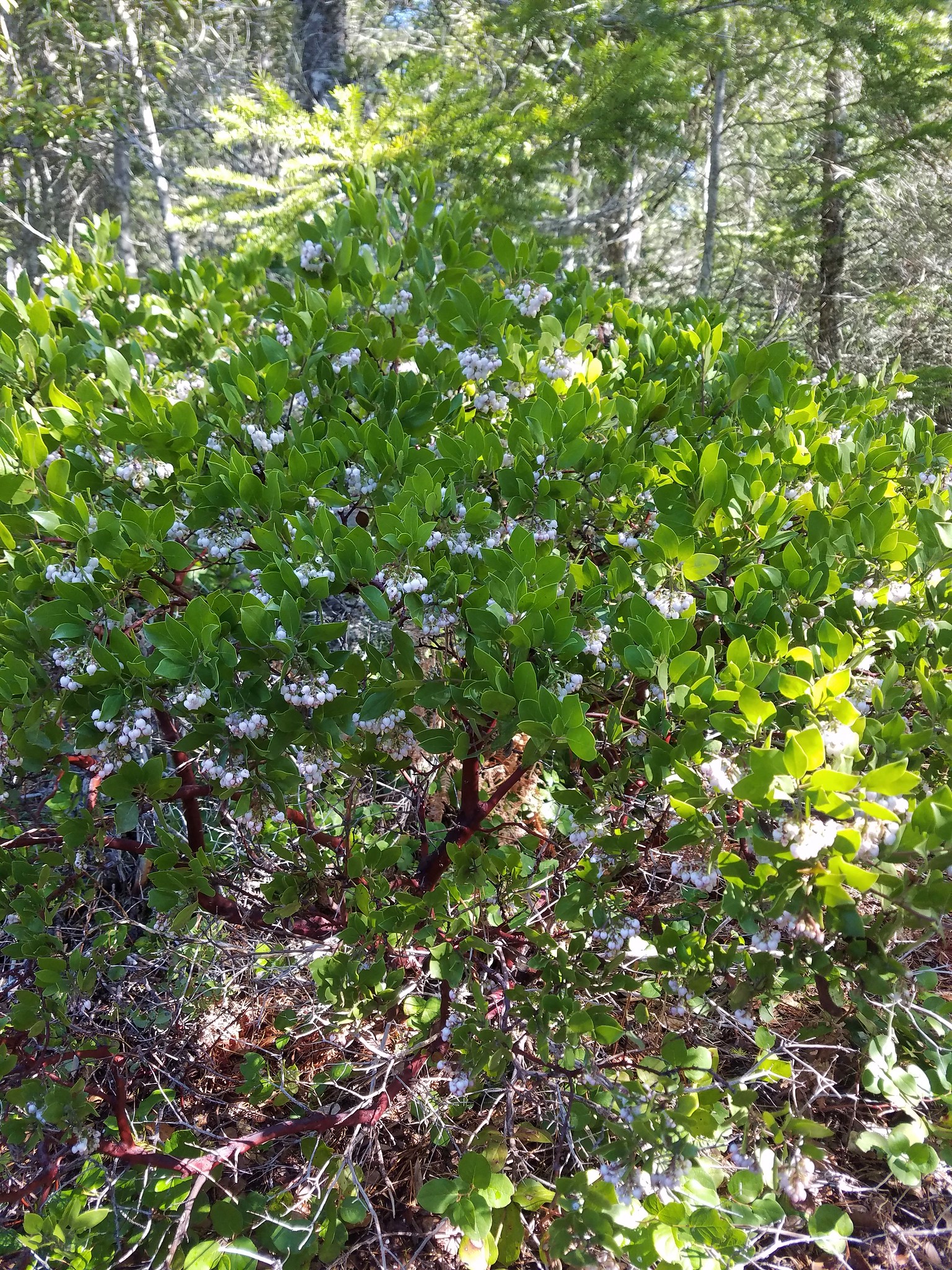 Two miles from Panther Camp we came to a junction with the Clay Hill Trail which led down into the Rogue River Valley. 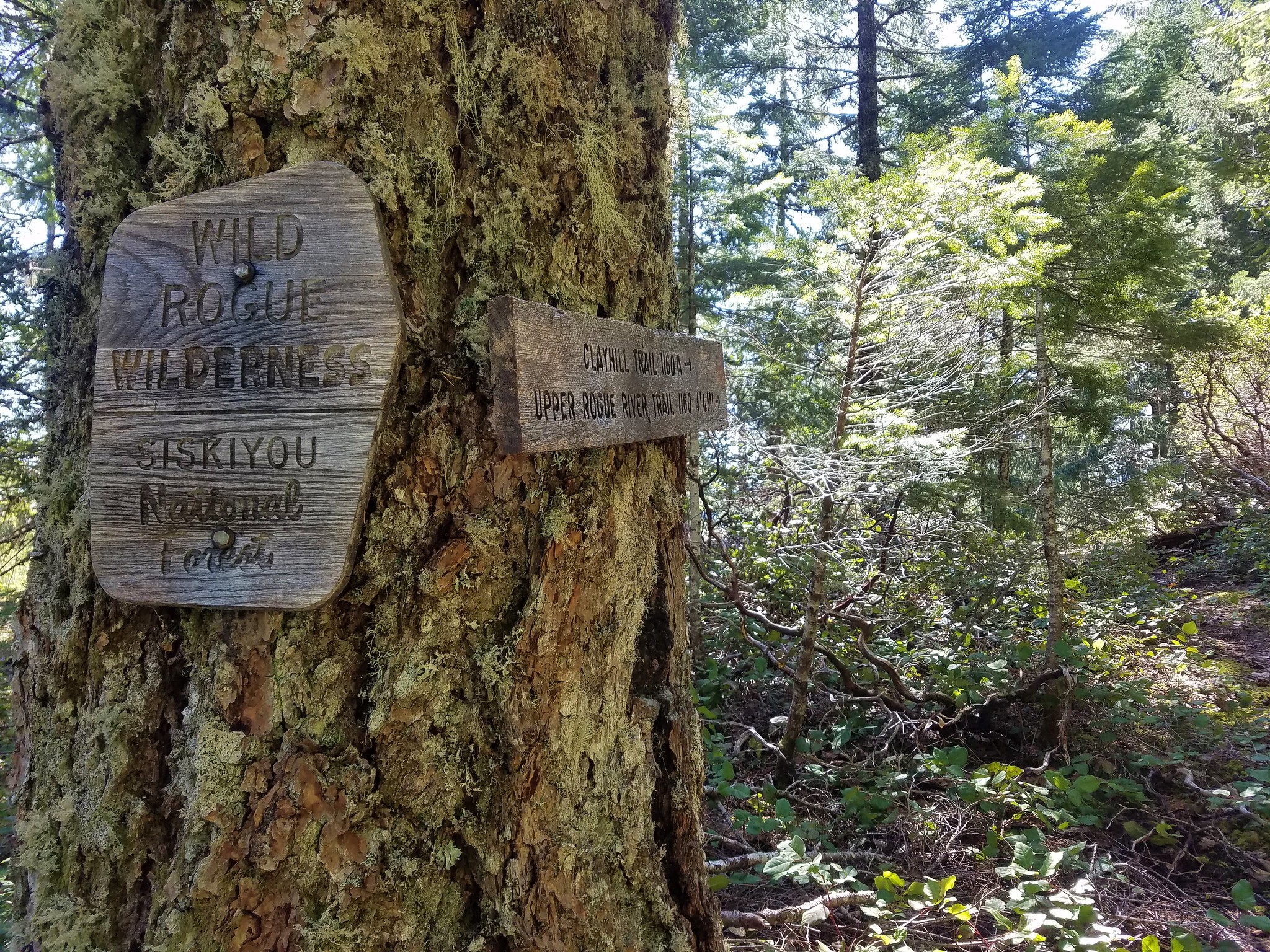 Our guidebook indicated that another .9 miles would bring us to the rentable Bald Knob Lookout so we kept going.

After about a mile we arrived at a grassy turnaround at the end of an abandoned road. There was no lookout to be seen but the trail continued north below a small hill along the ridge. We kept following the trail for another mile and a half where we came to another abandoned road bed. The Garmin showed this road heading up to the top of the hill we’d just skirted around so we followed it up to the top where there was no lookout and just a minimal view to the west. 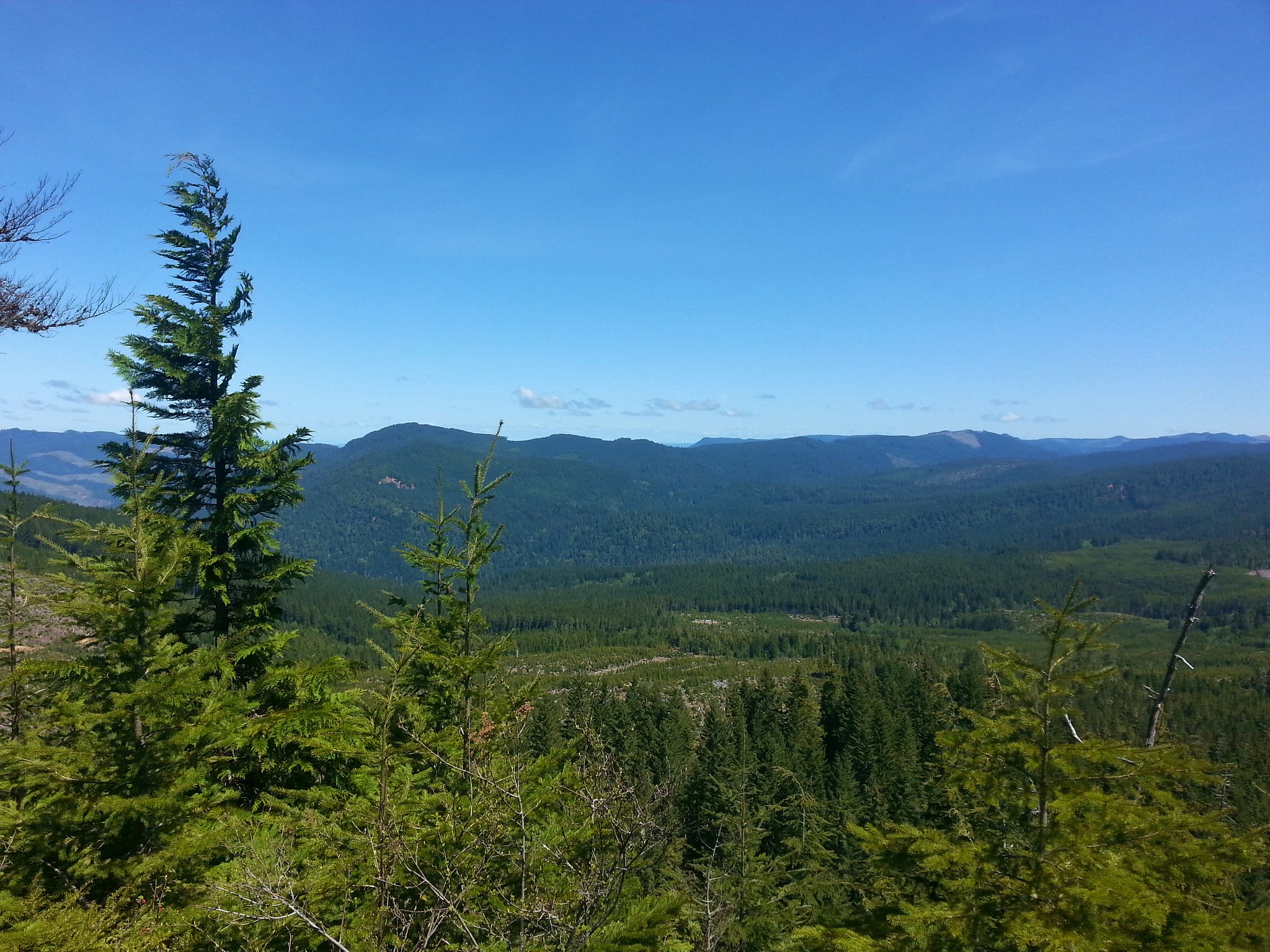 While we took a break I did some looking at the map on the Garmin and decided that the actual lookout was likely still to the north but we’d already gone further than we’d planned and were still confused by the description in the guidebook. We returned the way we’d come checking around the grassy turnaround to see if we’d somehow missed the lookout.

On the way back the views to the east had improved and now we were able to make out a snowy Mt. McLoughlin on the horizon. 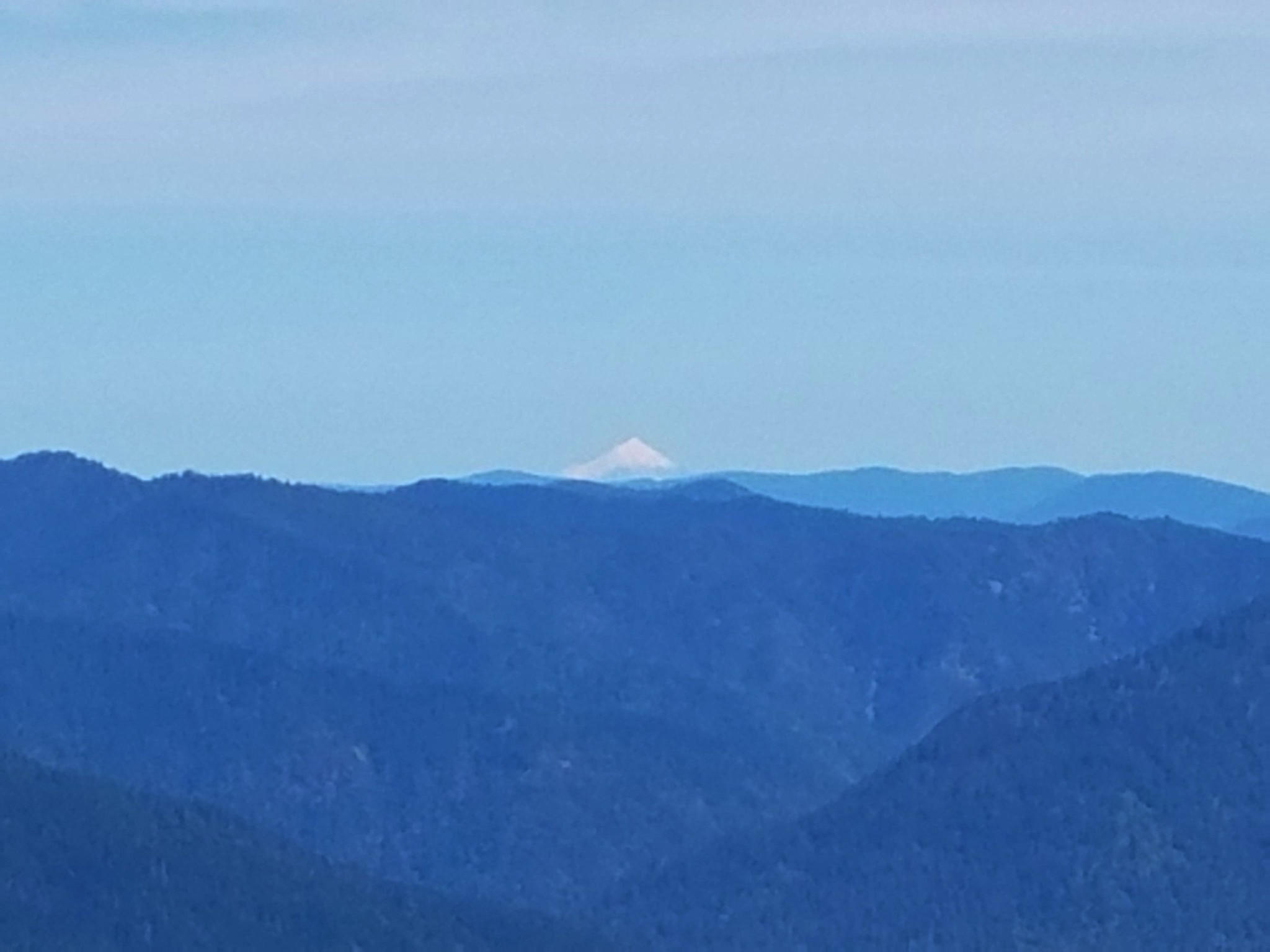 We turned onto the .4 mile trail out to Hanging Rock which still had some lingering snow of its own. 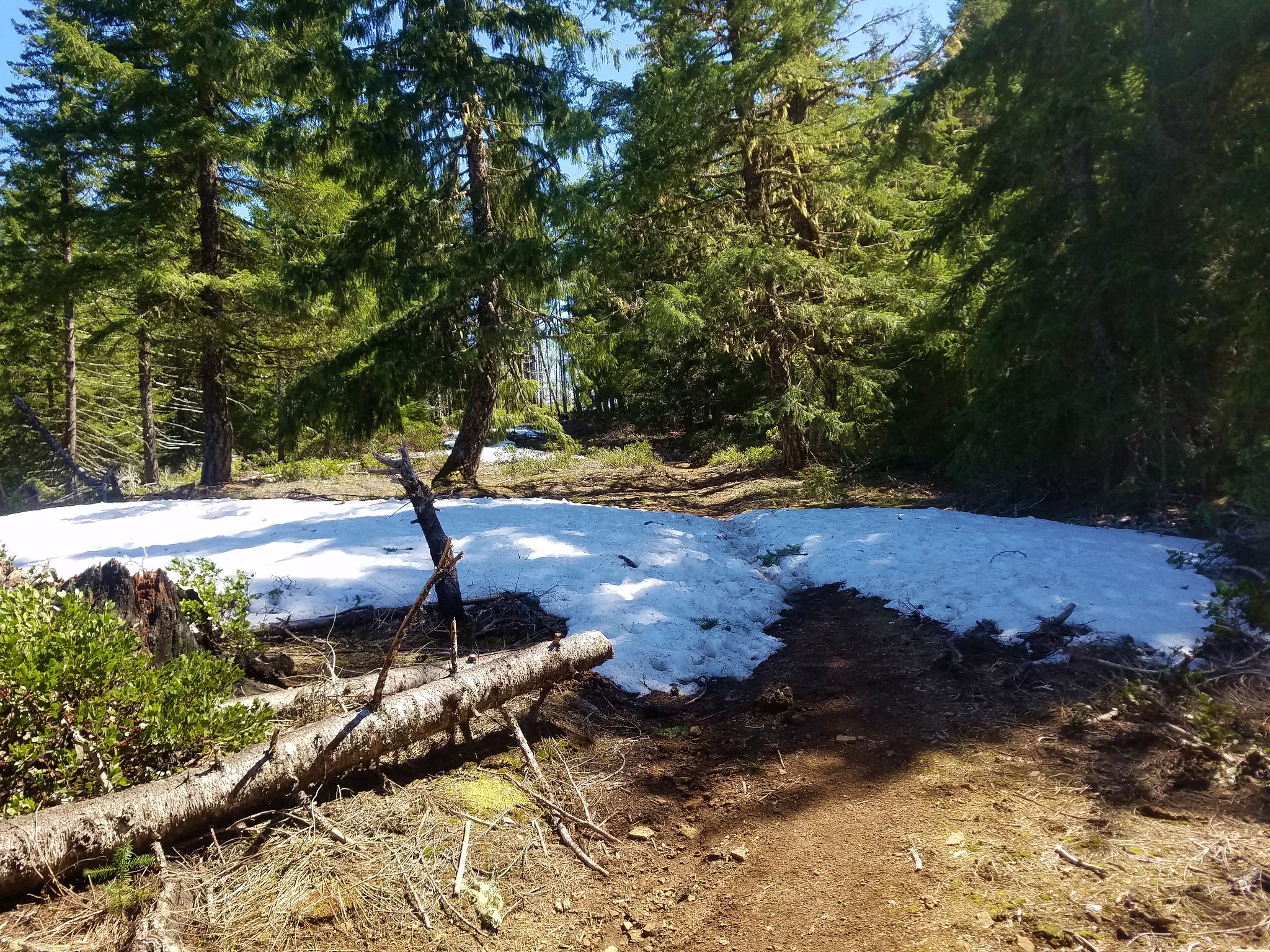 It was quite windy on the exposed rocks but the views were good with Hanging Rock towering over the Rogue River Valley. 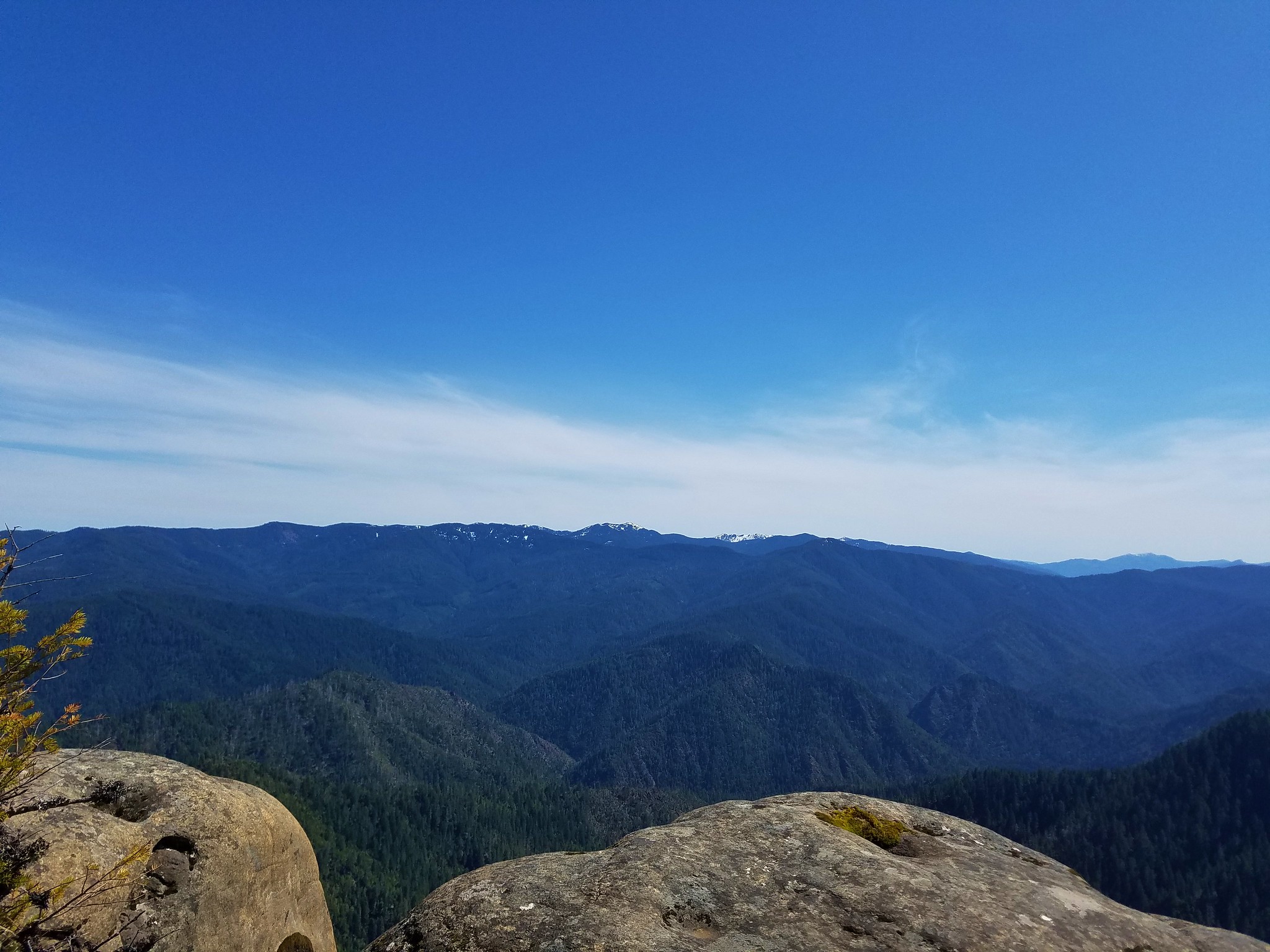 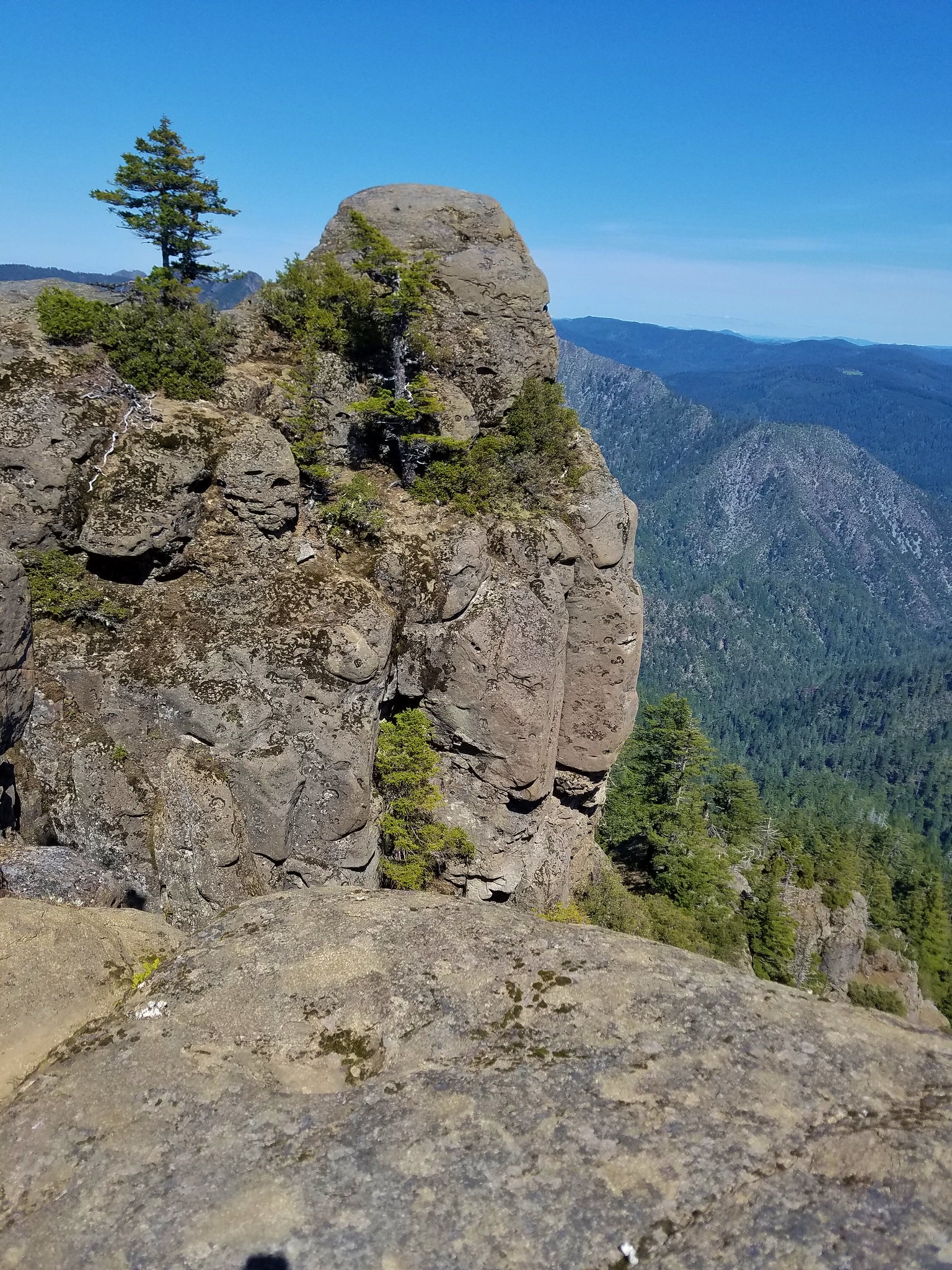 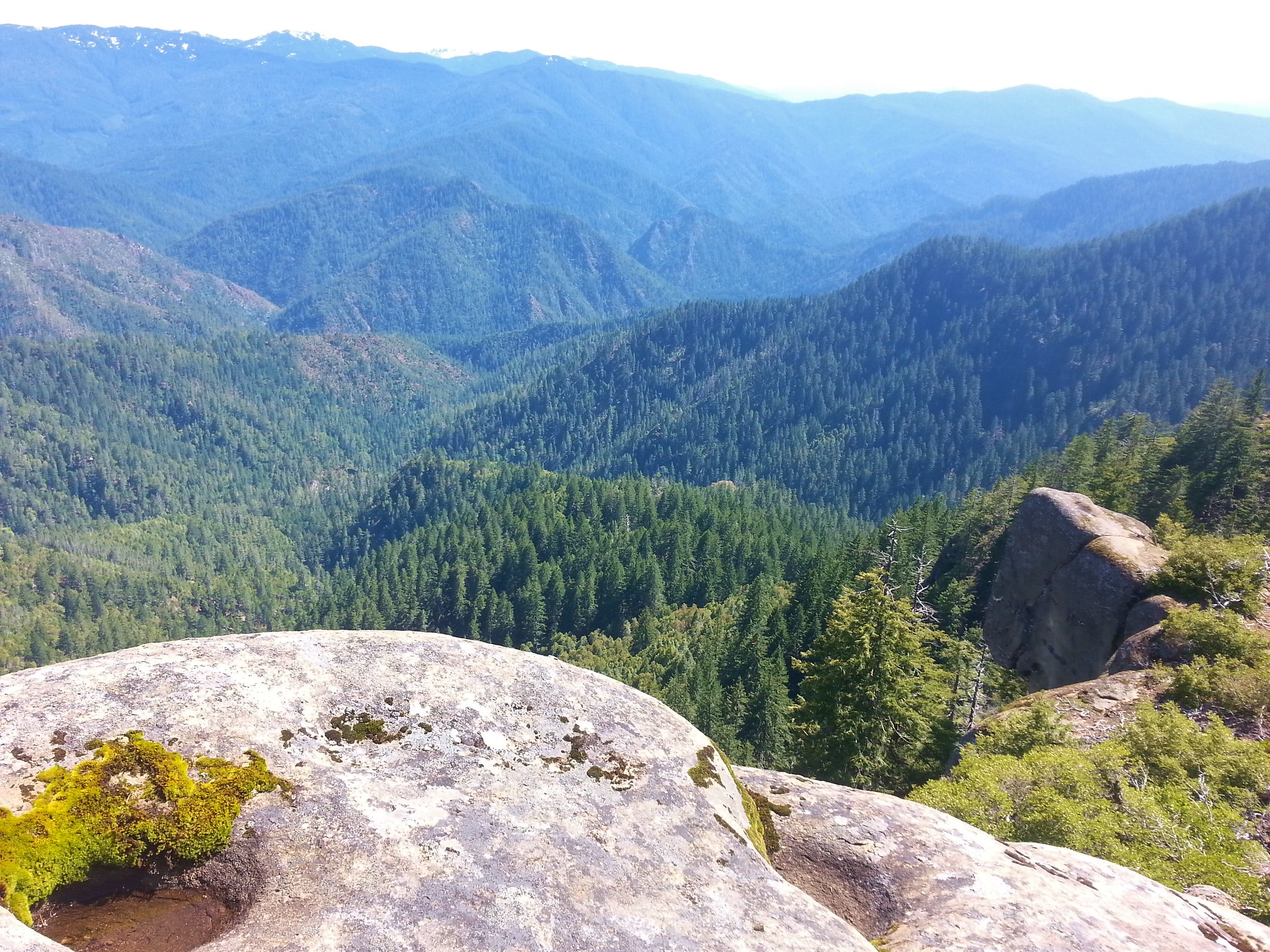 Having slipped on the wet rocks the day before I chose not to make my way out onto Hanging Rock itself although it is possible. 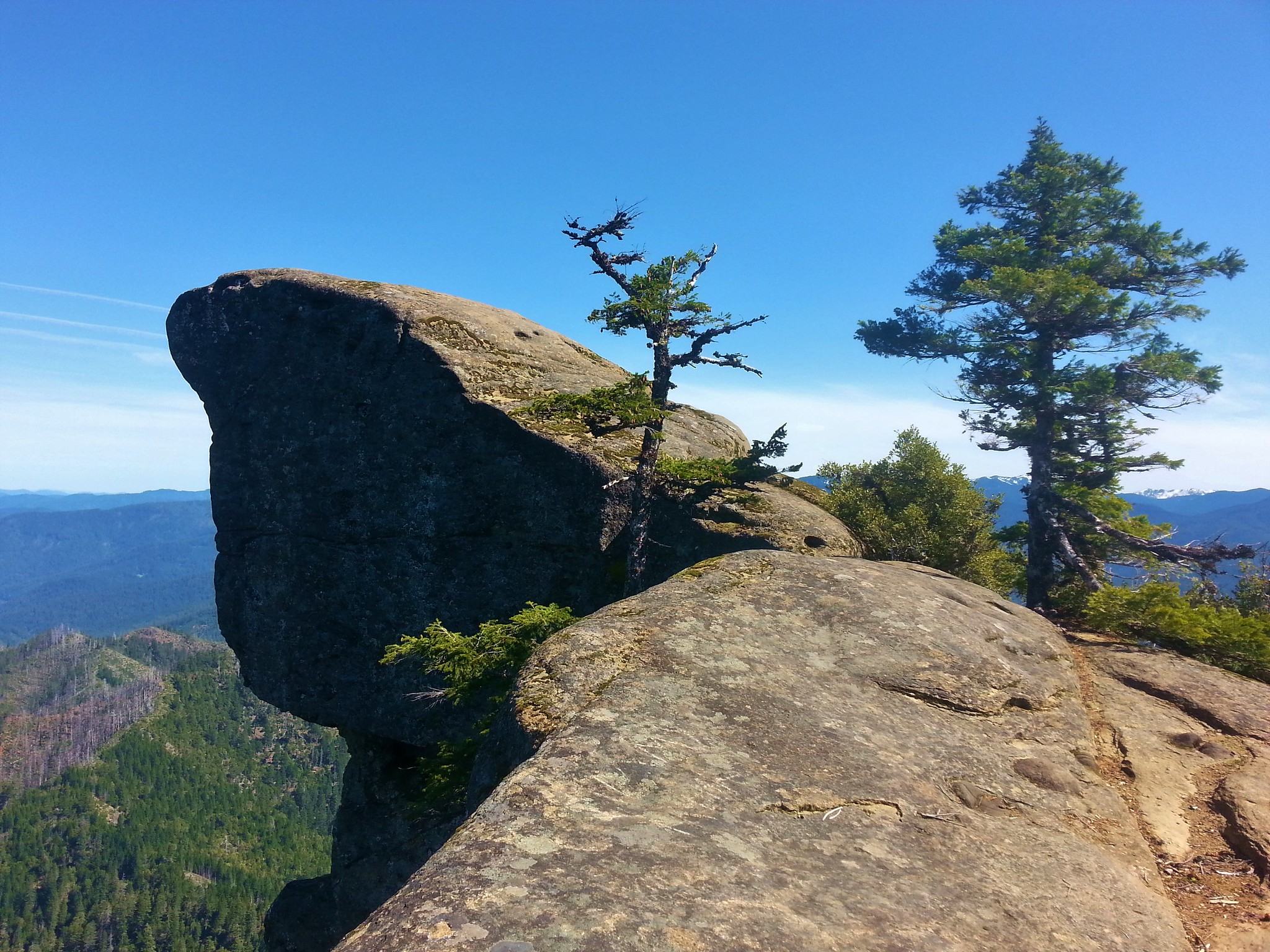 After a nice long break we returned to our car stopping at Elk Creek Falls before returning to Gold Beach. We hadn’t seen much in the way of wildlife on the hike but on the drive back we spotted a couple of deer and a young black bear along Jerry’s Flat Road. A check of the Garmin back at the motel showed we’d gone 19.5 miles on the day, nearly 5 miles more than we’d planned. We were also able to determine that the Bald Knob Lookout had been another 1.5 miles north of the road we took up the hill where we turned around. It was a good example of what can happen when you don’t take the time to fully research your hikes. Happy Trails!