Now that we are in the midst of our offseason it’s time to bring back our Throwback Thursday posts. This installment of Throwback Thursday features our final hike of 2012 and the last hike we took before starting this blog.   On 12/19/2012 we headed for the Alsea Falls Recreation Area which is located in the Coast Range west of Monroe, OR.  To reach the area from Highway 99w we turned west near Monroe at a sign for Alpine.  Signs for the recreation area kept us headed in the right direction.  We could have started our hike in a couple of places including the most popular trailhead at a day use picnic area practically next to Alsea Falls. We opted to instead to begin further up the South Fork Alsea River at a small trailhead along Miller Road. 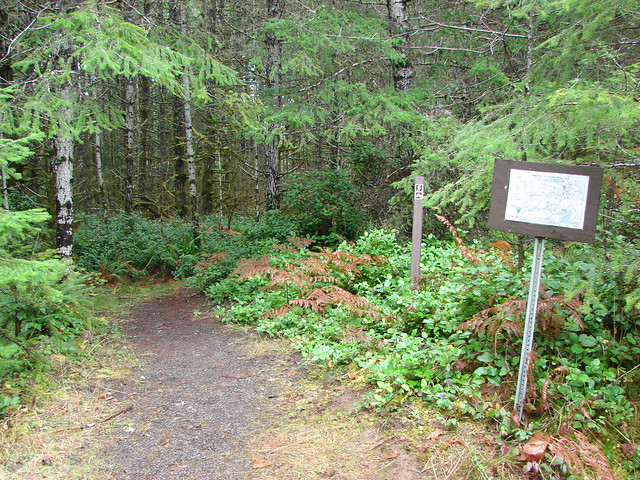 The level trail followed the South Fork Alsea River for a mile to the Alsea Falls Campground. At the .7 mile mark a trail joined from the right which was to be our return route. Had it been earlier in the year there probably wouldn’t have been many views of the river along this stretch but with the leaves gone from the trees the river was often visible. 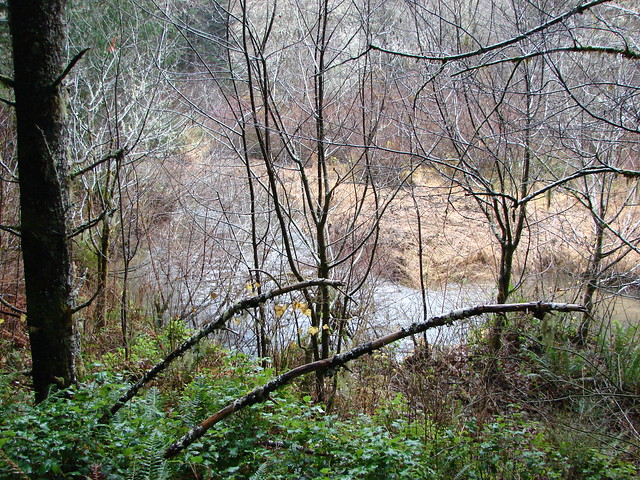 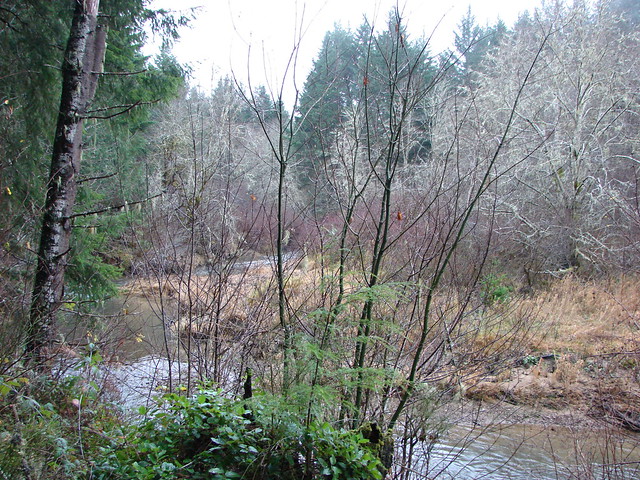 We didn’t take the footbridge across the river into the campground opting to stay on the east side of the river for another .6 miles to a second footbridge ignoring a side trail to the right (our return route) shortly before the bridge. 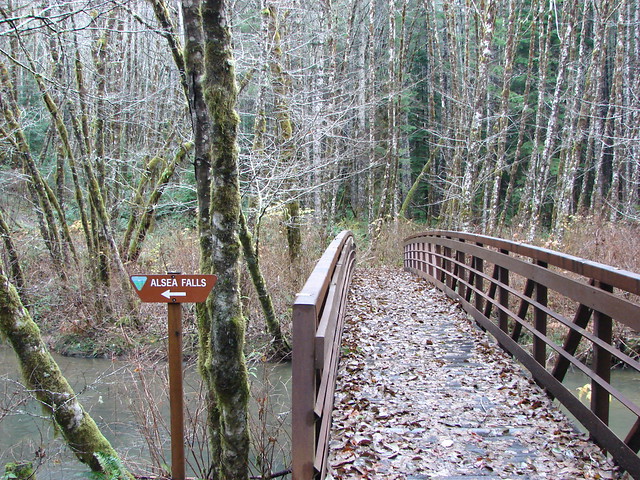 This bridge led to the day use picnic area. We crossed the bridge pausing to look downstream at the top of Alsea Falls. 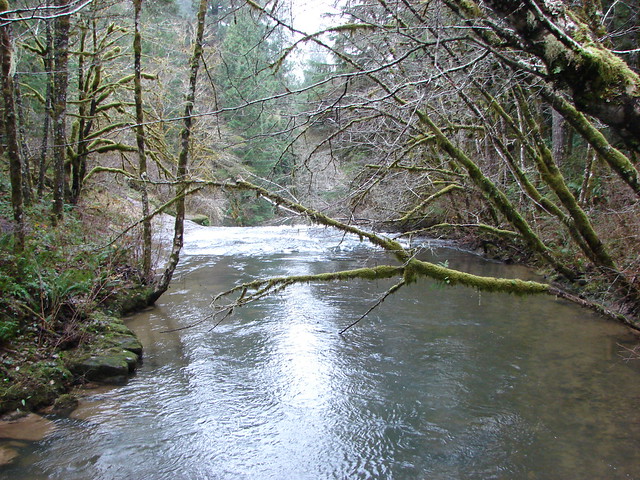 A .3 mile path continued downstream on the south side of the river below the falls. The photos we’d seen of Alsea Falls had obviously been taken at other times of the year. The pictures we’d seen were of a terraced fall gently cascading over rocks, but what we found was a whitewater cascade. 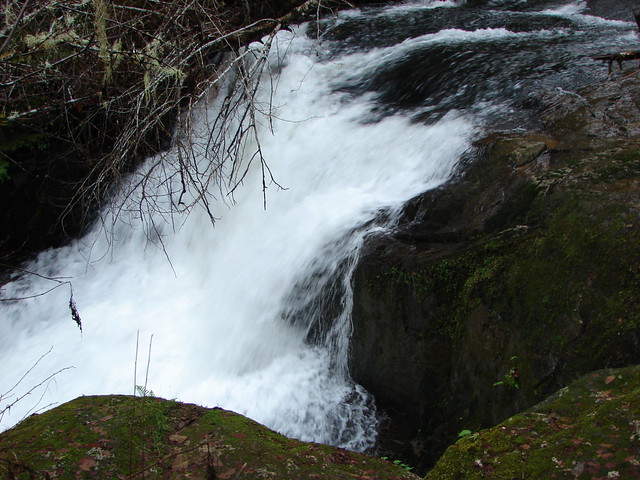 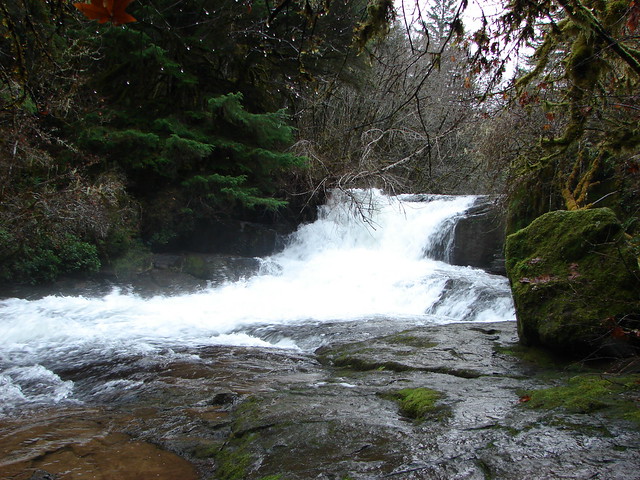 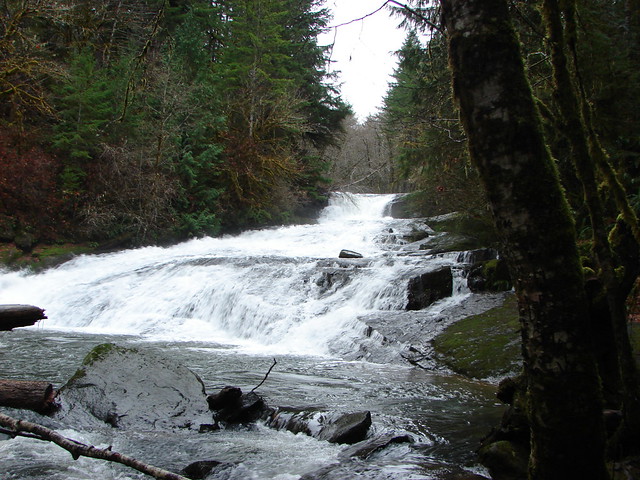 After admiring just how much more water was flowing now than what we’d seen in the photos we recrossed the footbridge and turned left continuing downstream. The trail climbed a bit before dropping back down near river level and another split in the trail after .6 miles. A trail here descended to the river bank before petering out. 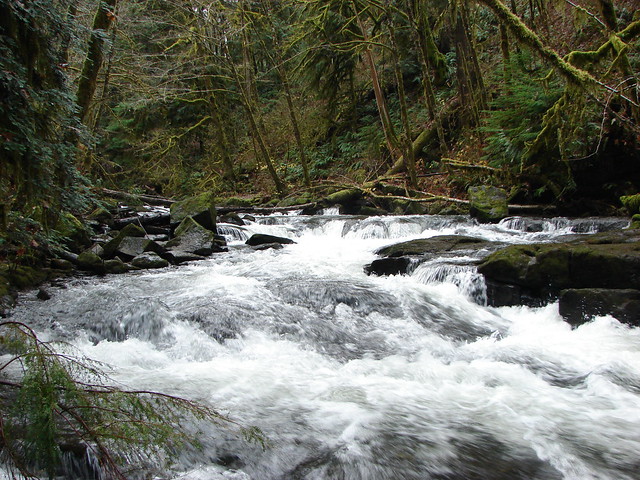 From here the trail soon joined an old road which we followed briefly toward McBee Park to another trail which led slightly uphill to the right. 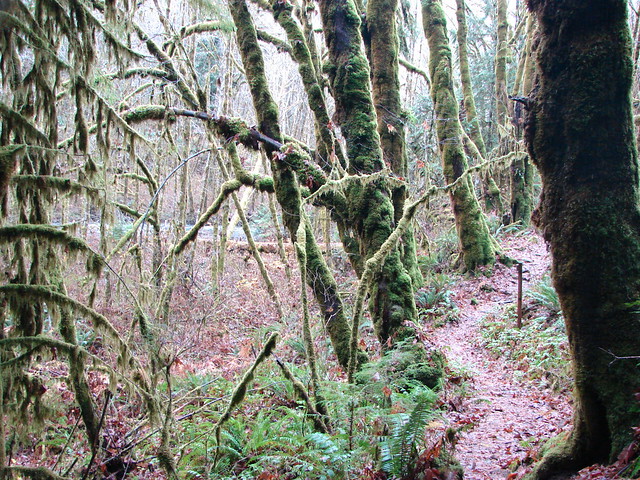 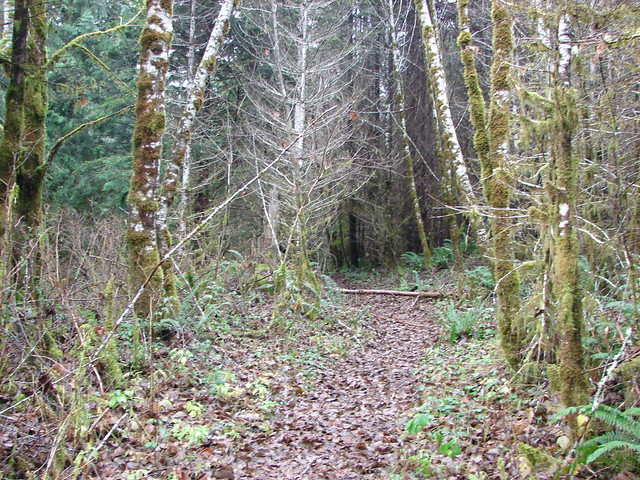 This trail ran parallel to Peak Creek but stayed far enough away to keep it hidden most of the half mile to Green Peak Falls. 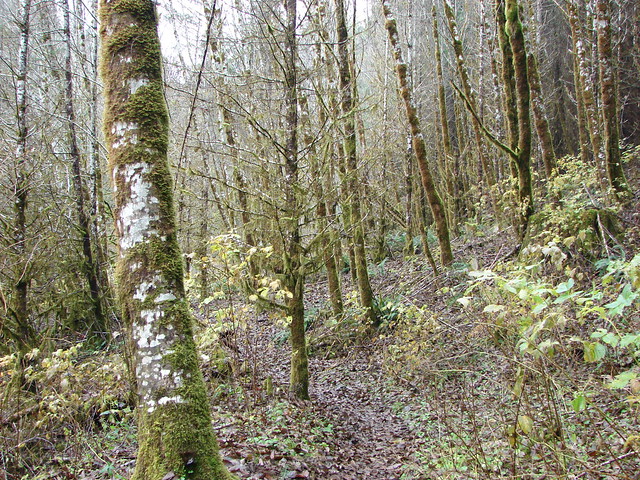 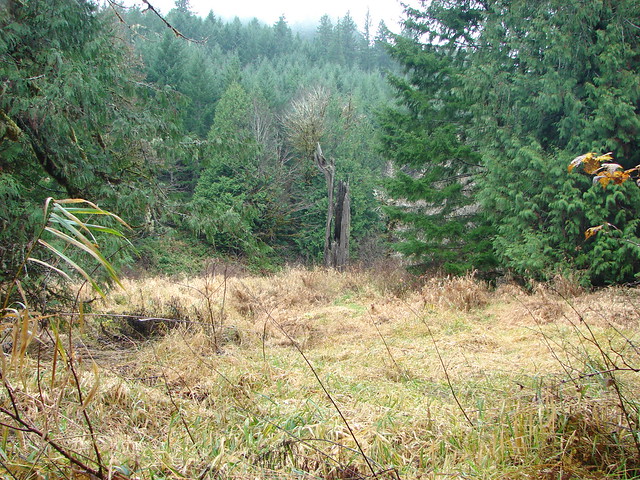 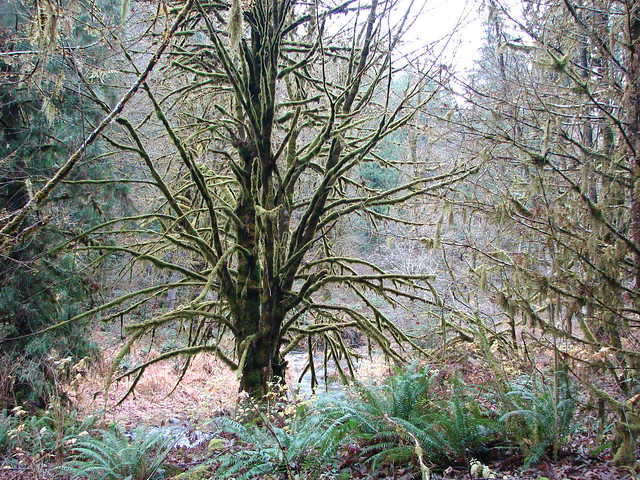 Having not seen any pictures of Green Peak Falls we weren’t sure what to expect but were pleasantly surprised by this 60′ waterfall. 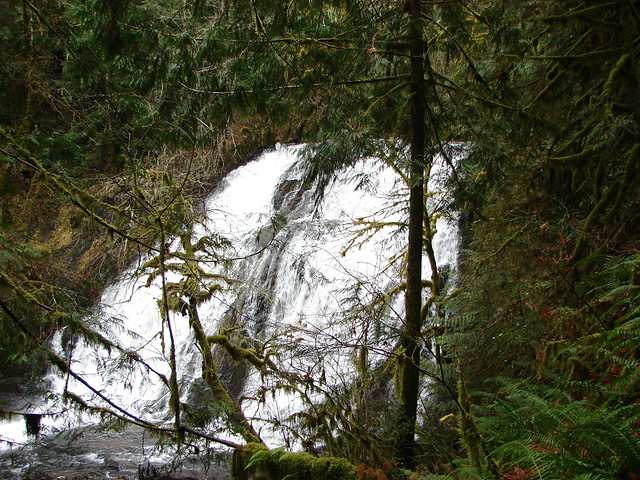 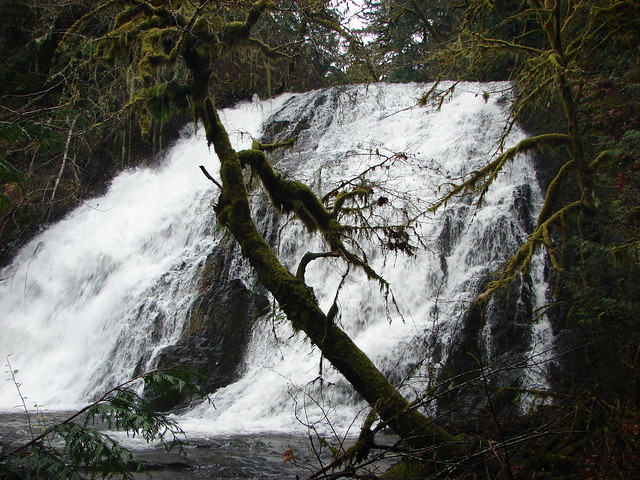 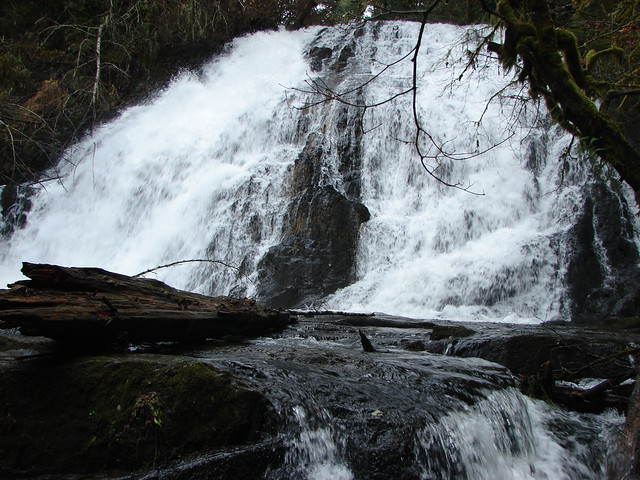 Almost as mesmerizing as the waterfall was a tree on the far side of the creek that was covered in light green lichen. 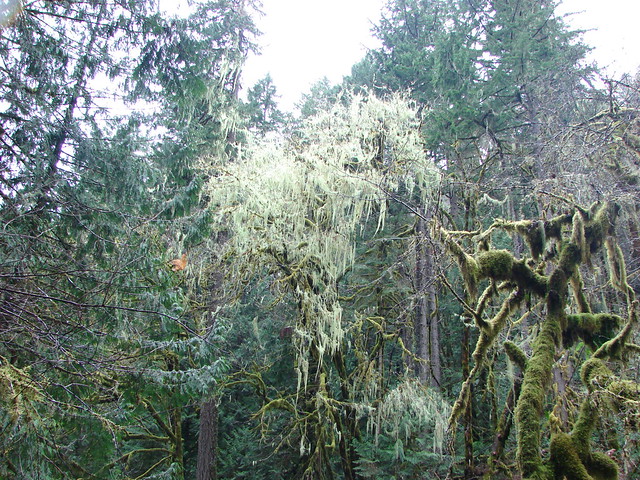 On the way back we had a couple of loop options. We could have taken a .6 mile section of trail from the picnic area to the campground, but we chose a slightly longer loop with a little extra elevation gain. Just beyond the footbridge to the picnic area we turned left at a trail sign and headed uphill into the forest. 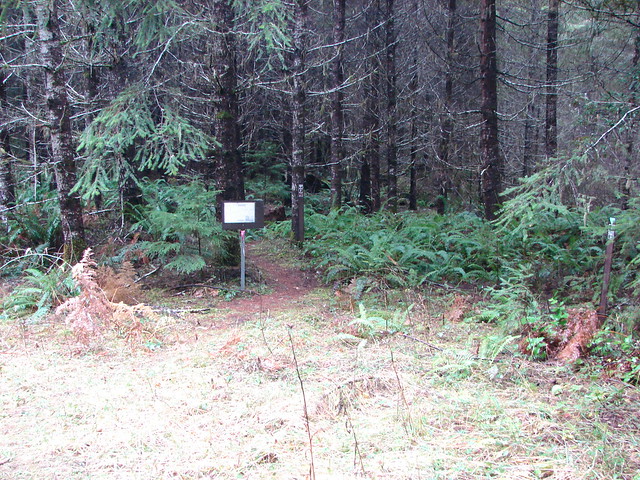 This path climbed for a half mile to a road where we turned right for another half mile before descending on another half mile trail to the junction we had passed that morning .7 miles from Miller Road. This mile and a half was view less but the trails were well maintained. 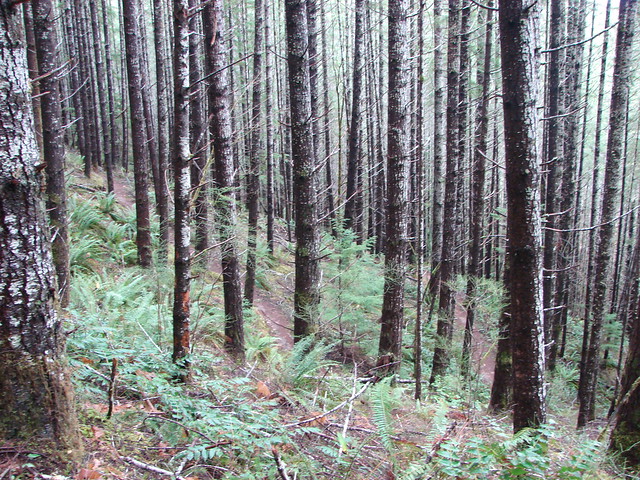 The Alsea Falls Recreation Area is popular in the warmer months when the river is more inviting but we had basically had the area to ourselves and the strong flow over the falls made a Winter visit worthwhile as well. Happy Trails!