Our third hike while in Bend took us back to the Three Sisters Wilderness for a mostly off trail waterfall loop that had been reported on by a member of Portland Hikers in November 2013. The plan was to start at the Chush Falls Trailhead and continue past the falls up Wychus Creek passing two more waterfalls then crossing that creek and Park Creek visiting six more waterfalls on three different creeks before recrossing Wychus Creek and returning to the trail.

We were greeted at the trailhead by some chilly air. We could see parts of the tops of the Three Sisters which were mostly engulfed in clouds. What we could see though showed that a little fresh snow had fallen sometime in the previous couple of days. 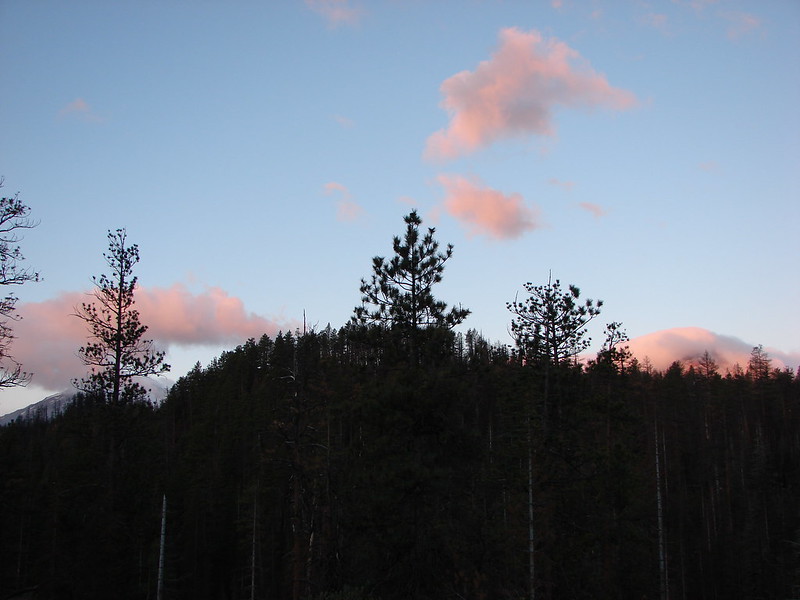 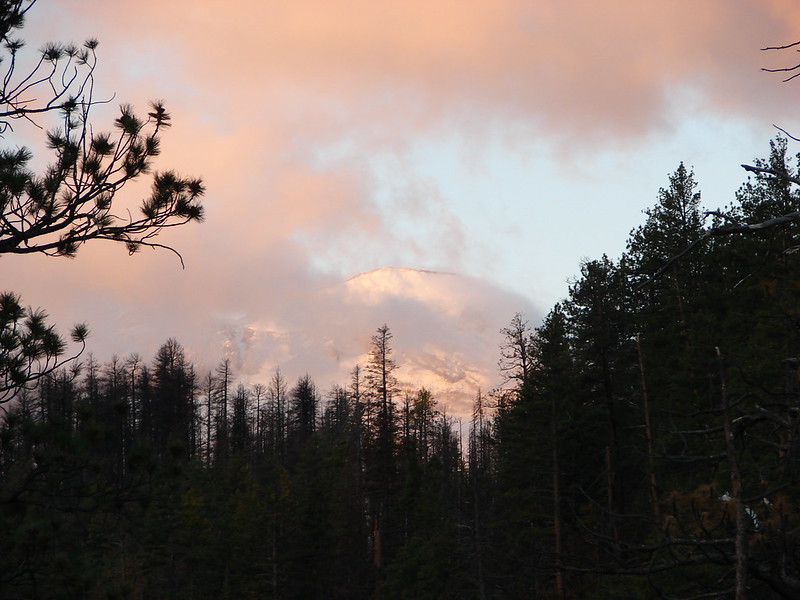 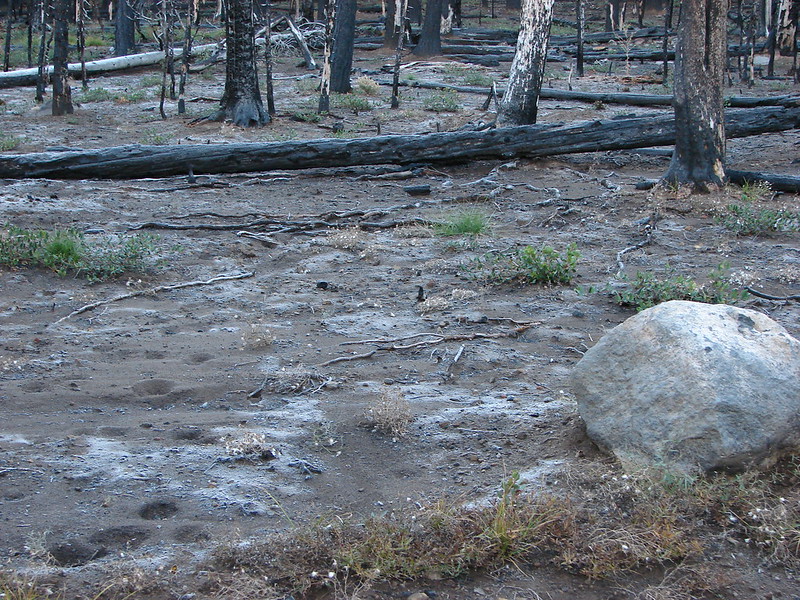 The beginning of the trail is on an abandoned road which we followed for about a mile and a half before reaching the former trailhead which was now only marked by a homemade sign. 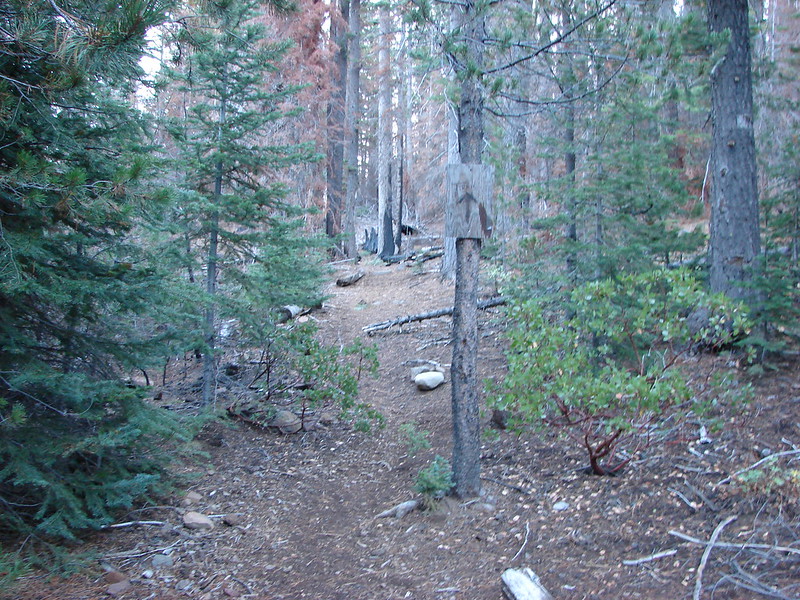 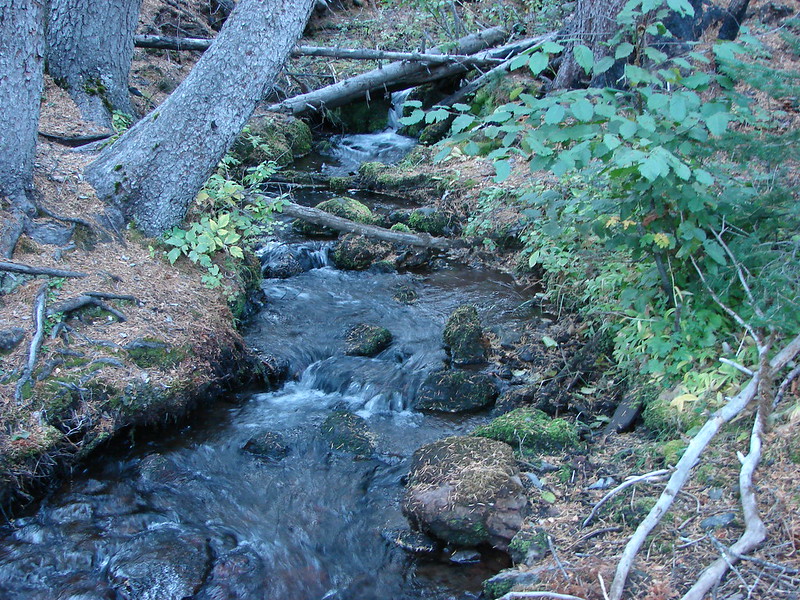 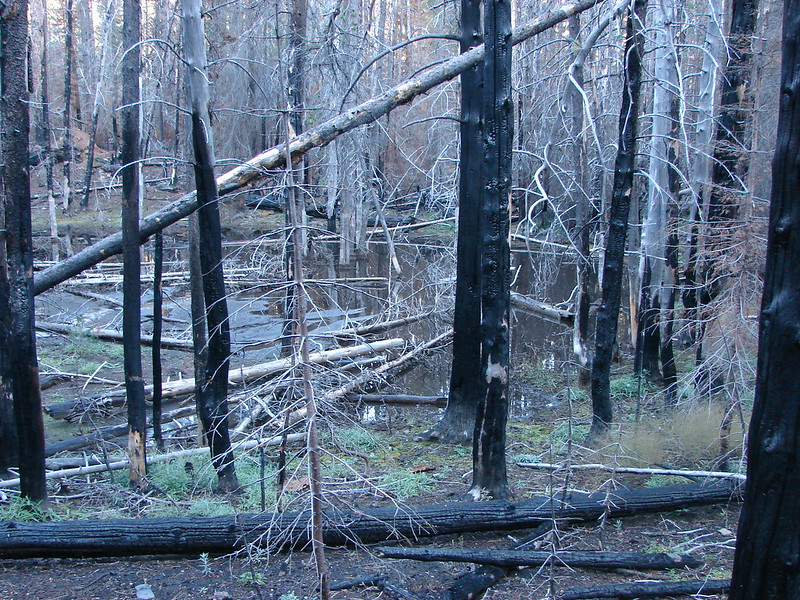 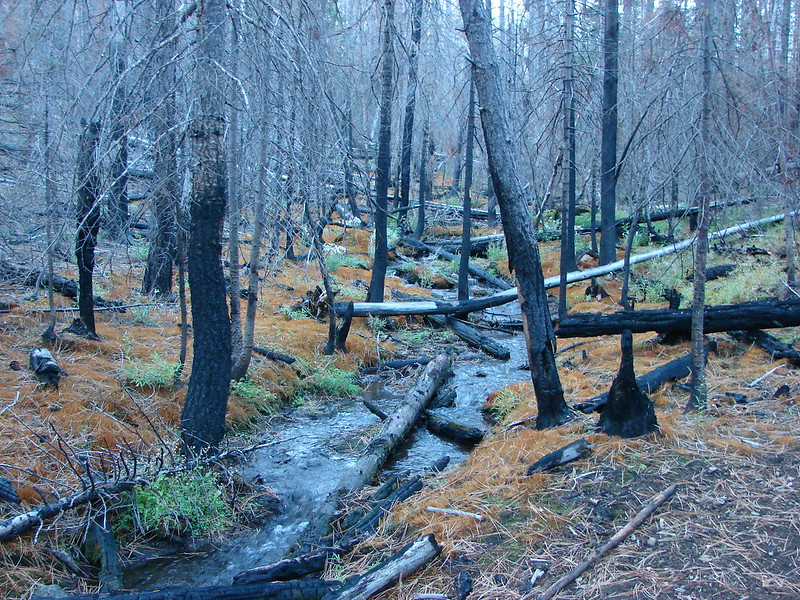 A mile from the old trailhead we came to a wide flat area with a Trail Ends Here sign. Beyond the sign the top of Chush Falls was visible. 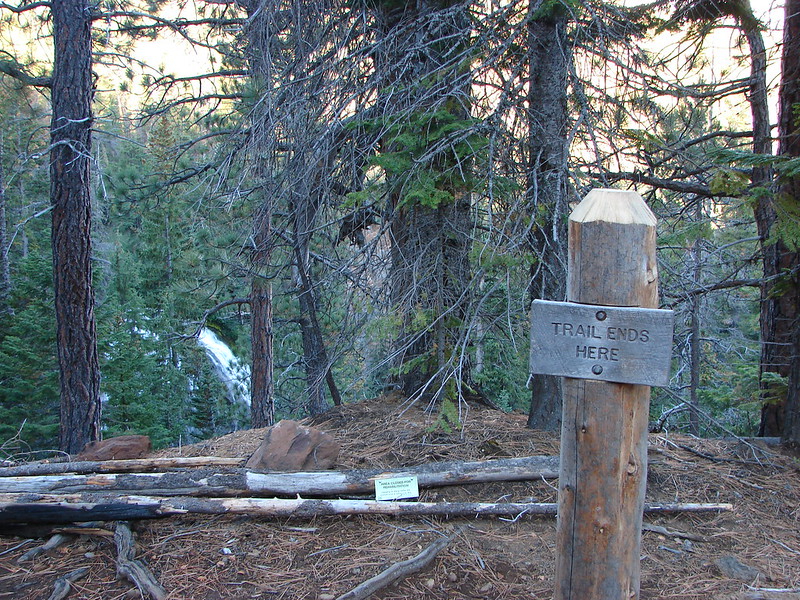 To the right was a clear path down a steep slope to the base of Chush Falls. 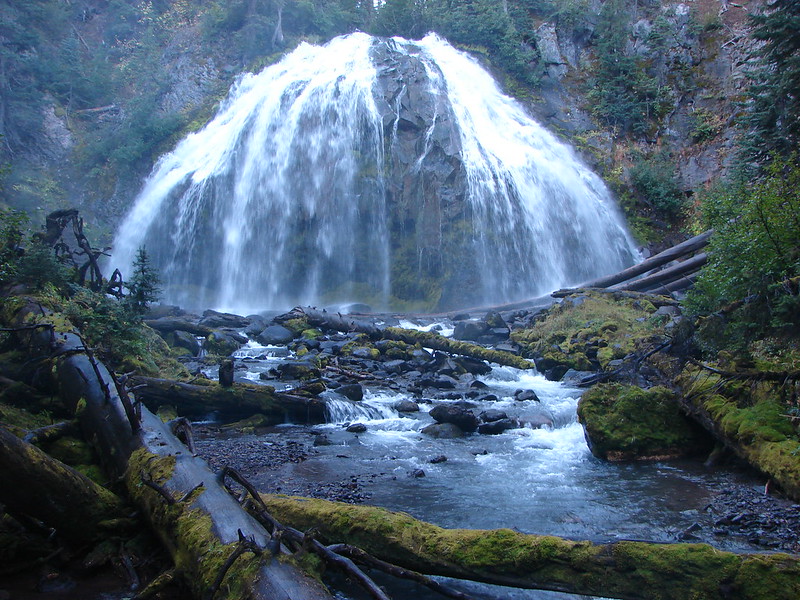 After returning to the trail ends here sign we picked up another clear trail continuing up Wychus Creek. The second waterfall was just .3 miles up this use trail. 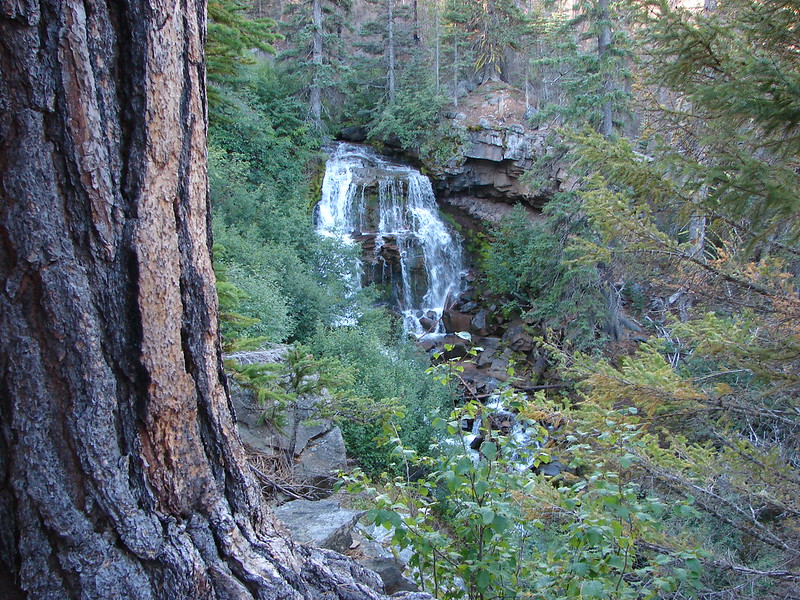 We found Upper Chush Falls another .3 miles from the middle falls. This was by far the most interesting of the falls on Wychus Creek. It was also the most difficult to get a good view of because of its location in a rocky bowl and 230′ height. 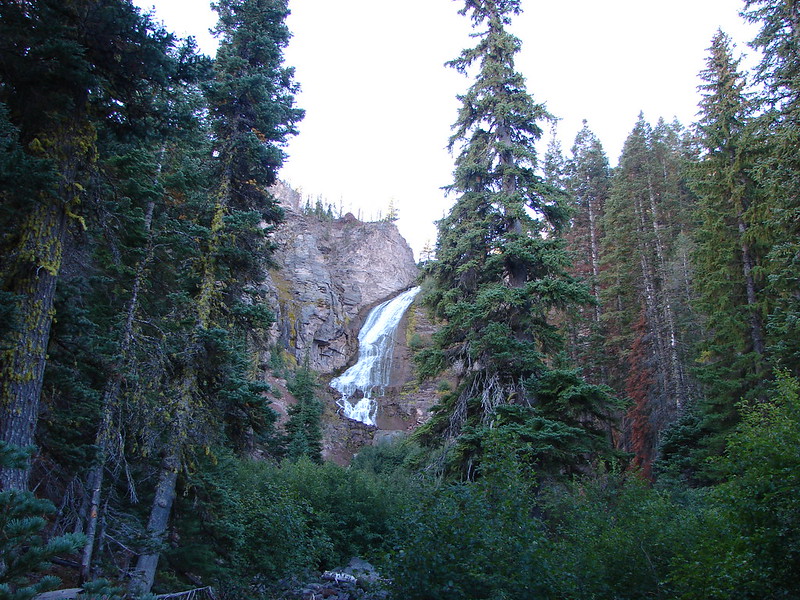 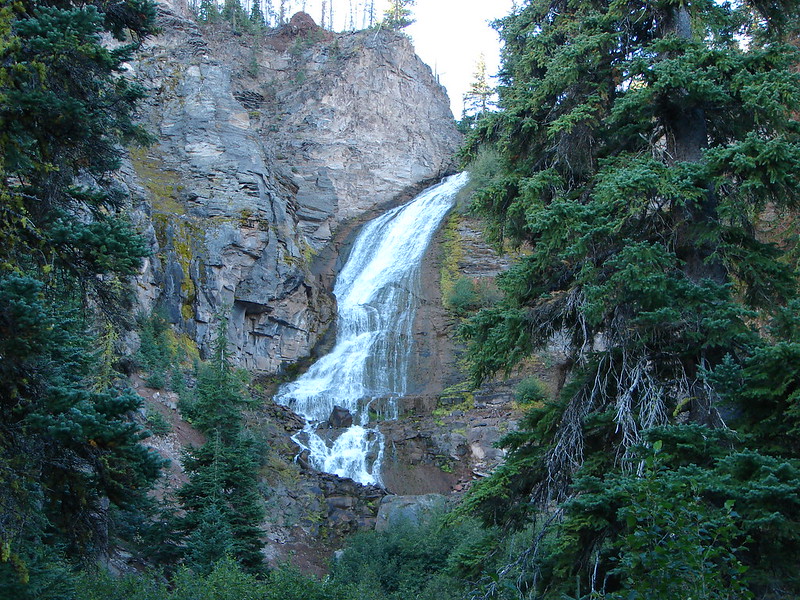 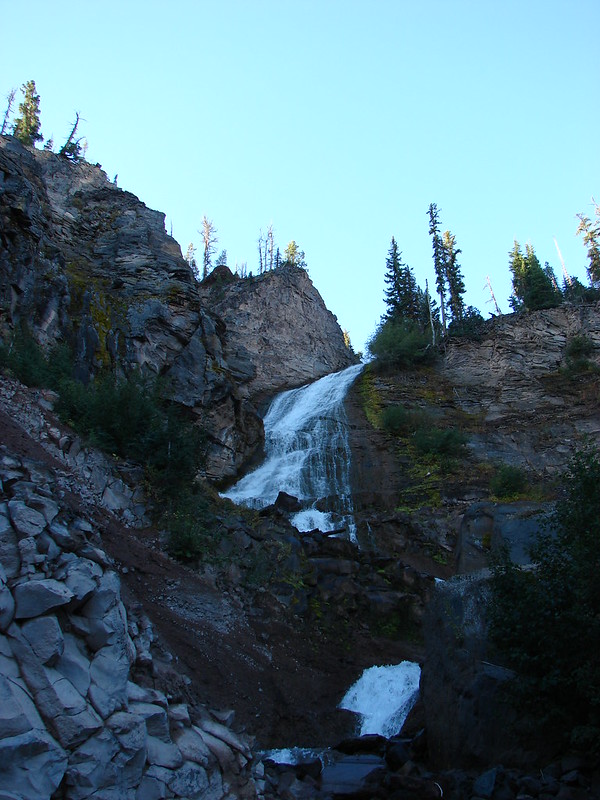 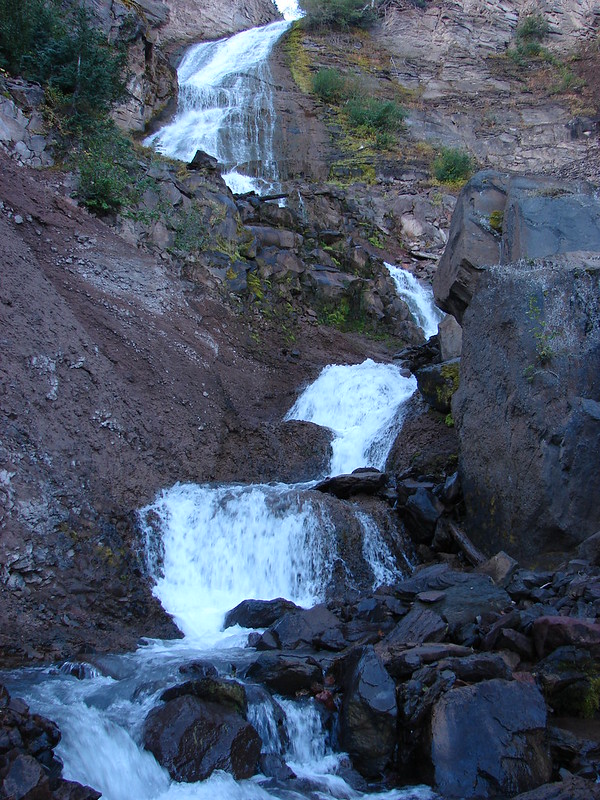 My parents, who had started the hike at the same time we had, caught up with us here. They had not spotted the trail down to the base of Chush Falls so we were able to give them that information before we set off cross-country in search of the next fall – Phoenix Falls.

In order to reach Phoenix Falls we needed to be up above Upper Chush Falls and over to the next creek which was East Fork Park Creek. We had unfortunately neglected to bring the maps we had planned on having with us, but we still had our Garmin (and tons of batteries). I had also spent a lot of time pouring over the maps and Google imagery of the area and making notes so we felt fairly confident in the resources we did have. We crossed Wychus Creek below the upper falls and began to skirt around a ridge end in search of a draw that I hopped would be the easiest way up to the plateau above the ridge. We picked our way around the ridge following game trails as best we could until we could see the draw below in between two ridge ends. The draw did indeed look like it would have been a good option but we had crossed the creek and headed around the ridge way above the draw so continued up and around the ridge finally reaching the draw near the edge of the plateau. Travel became much easier once we emerged from the draw. We continued SW toward the location on the creek where we expected to find Phoenix Falls. The South Sister loomed ahead on our right as we went. 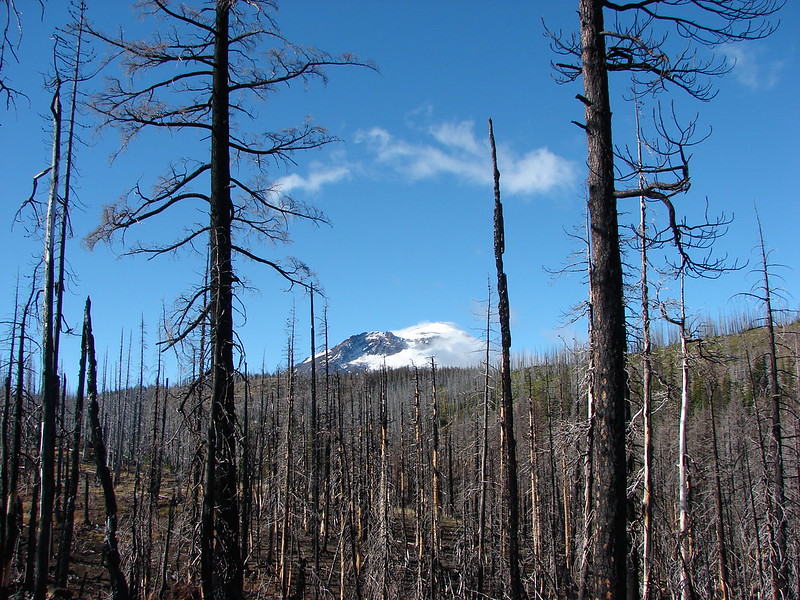 We reached the edge of the canyon in which the East Fork Park Creek was flowing and began following it up toward the sound of a waterfall. Soon we could see the falls we were in search of with the added bonus of Broken Top rising over the shoulder of Phoenix Falls. 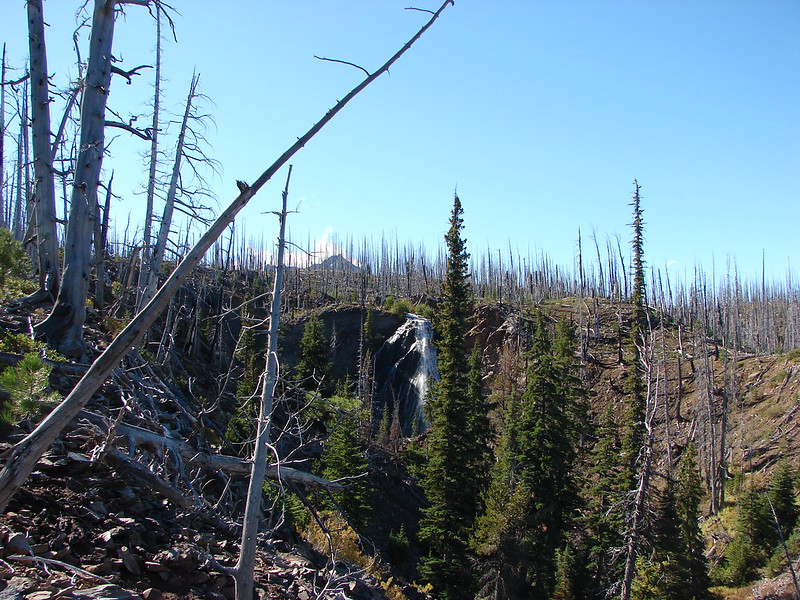 To the right of Phoenix Falls were the Three Sisters. The 110′ falls roared down into the canyon creating a good amount of wind up on the rim. 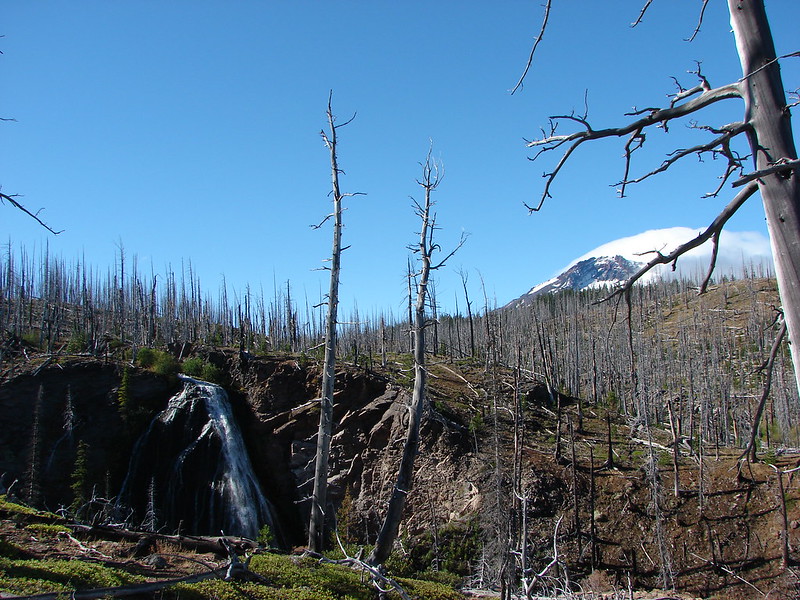 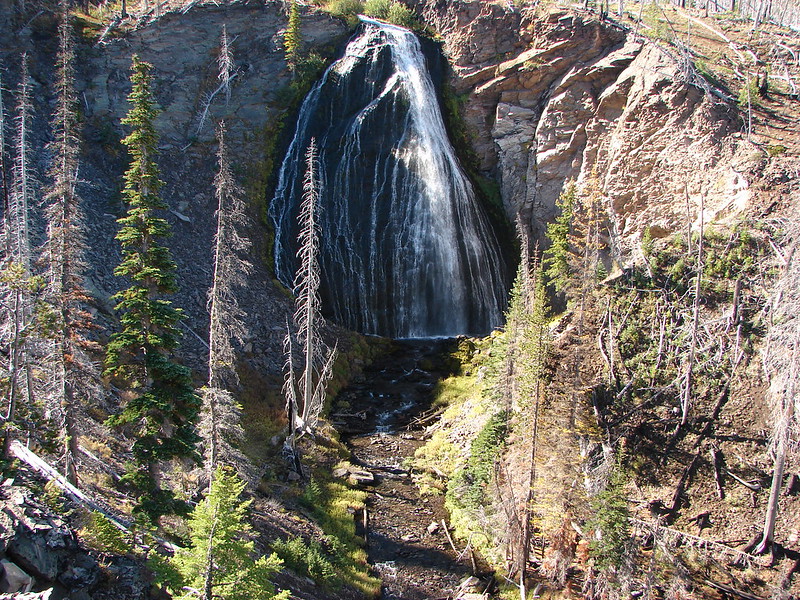 From Phoenix Falls we headed back downstream below the confluence of the East & West Forks of Park Creek and crossed what had become Park Creek. We then made our way along the West side of Park Creek to Middle Park Creek Falls. This was the most difficult to get a clear view of due to the angles of the canyon and a couple of downed trees laying between the canyon walls. 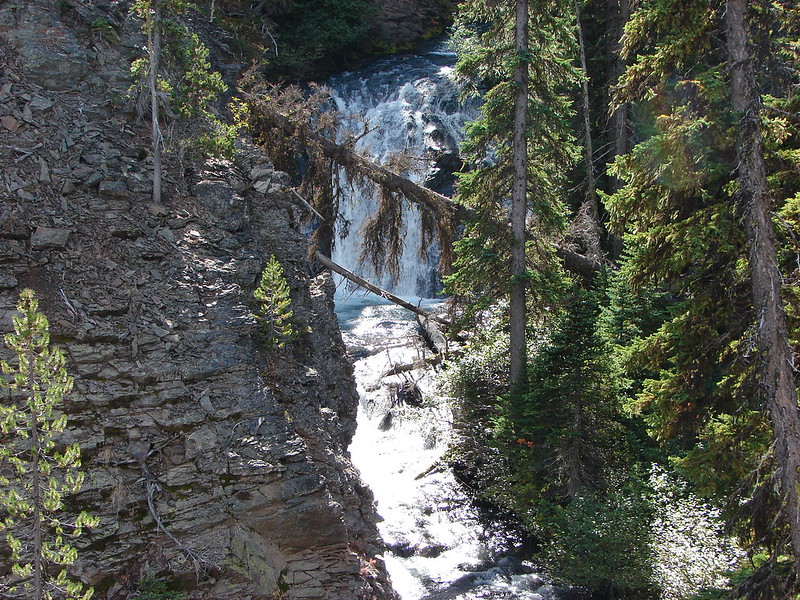 Just down the creek was the next fall – Howlaak Falls. 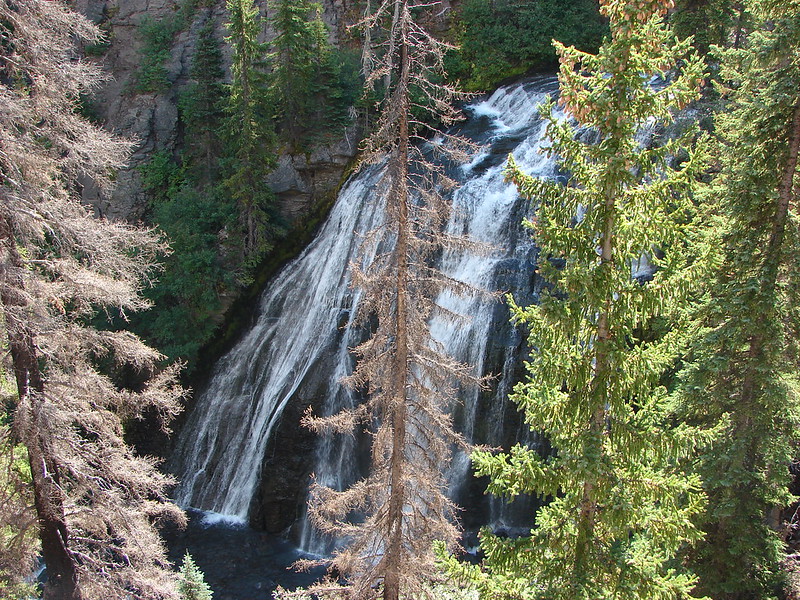 We left Park Creek at Howlaak Falls and headed cross-country again toward yet another creek – South Fork Wychus Creek. The final three falls we hopped to visit were on this creek. We had to traverse along another ridge end to find the creek and this time Heather took the lead picking up a good game trail which wound up leading us almost directly to Columnar Canyon Falls, the first of the three falls we were looking for. A short steep trail led down to a rocky overhang which allowed for a good view of the falls. Not a spot I’d recommend for anyone nervous around heights. 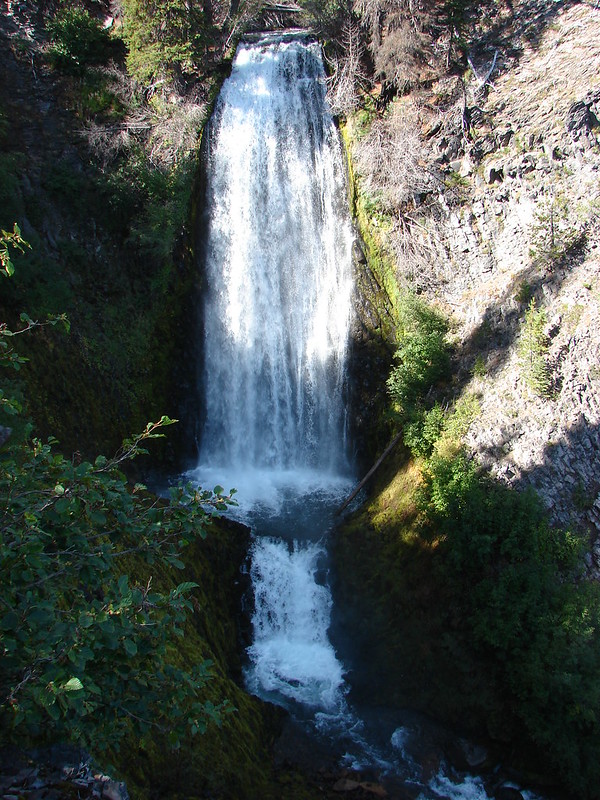 We then began following the creek down a ridge listening for the next fall. We heard Mosaic Falls before we spotted it. In fact getting a decent view of this fall proved to be as frustrating as I had read it was in the earlier trip report. It wasn’t too difficult getting down to the creek below the falls but there was no view of the falls from where you were able to get to the creek. 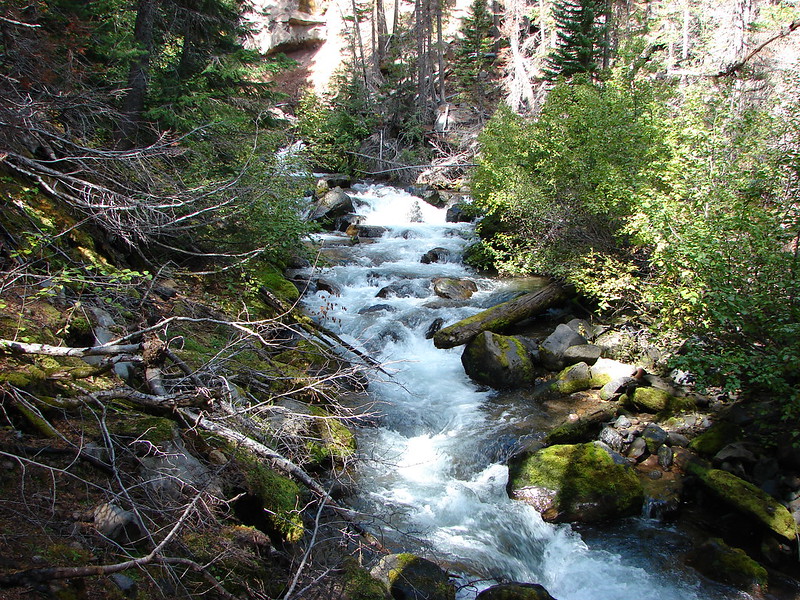 In order to see the falls I made my way along the edge of the creek shown above. It was slick and full of thorny gooseberry bushes and complicated by a large boulder that was in the way once the falls came into view. 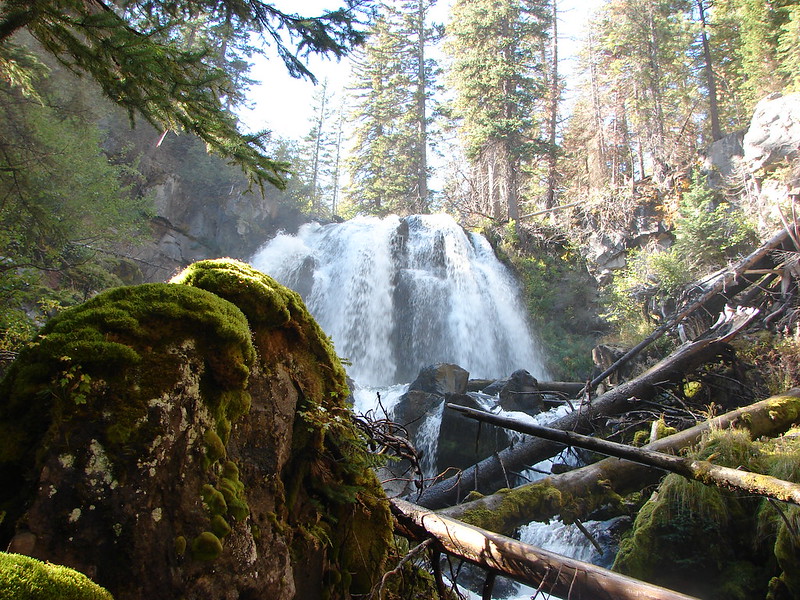 I managed to get around the boulder just enough to get a fairly clear view of the falls but even then the spray from the falls made getting a picture difficult. 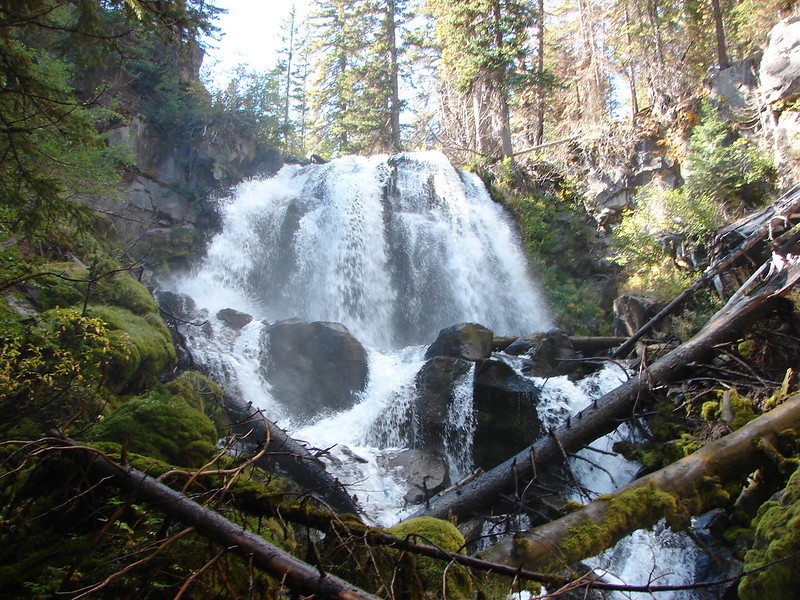 I rejoined Heather who had smartly stayed behind and then we headed for our final fall – Shelter Falls. We had to hop back over the ridge away from the creek in order to continue downhill. The ridge at this point was quite narrow though so we were never far from the creek. When we could we angled back toward the creek and were able to find the site of an old shelter. 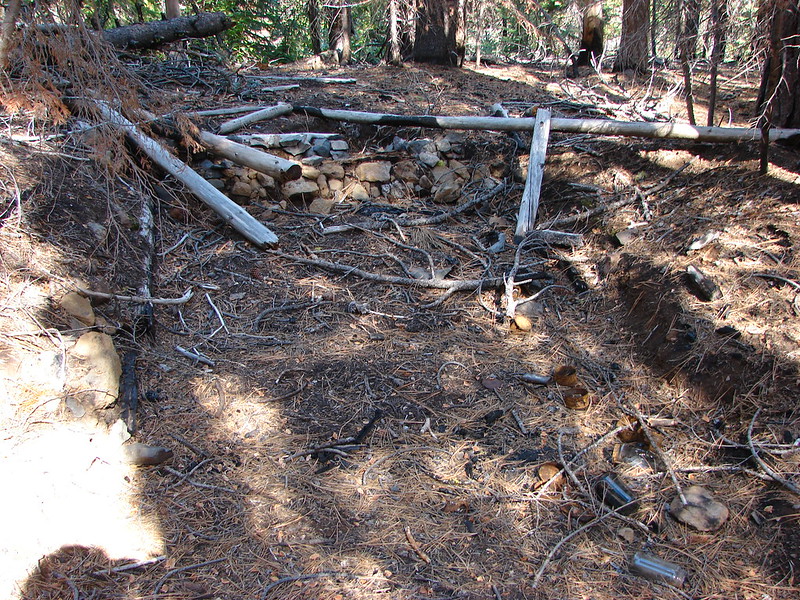 Just a little further on we found Shelter Falls. 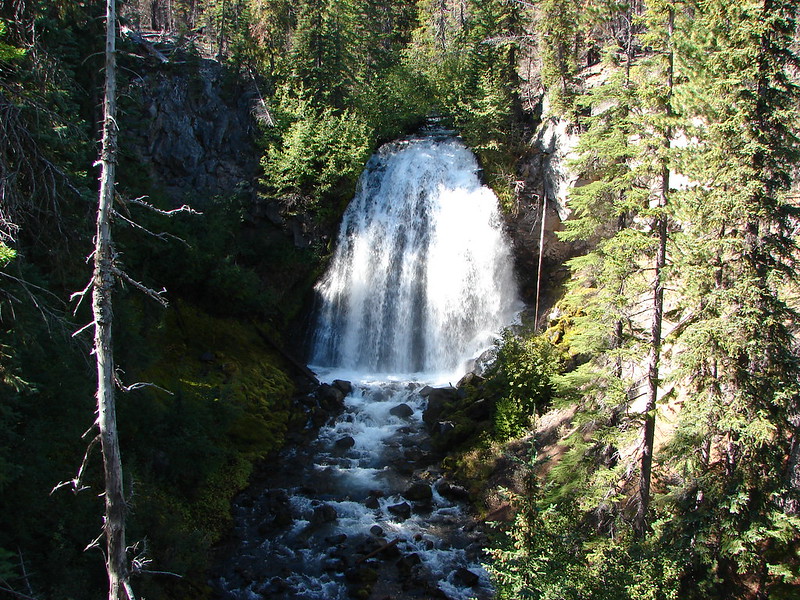 Having successfully found all the falls we were looking for (there are others out there) it was time to make our way back to the trail. This proved to be the most difficult part of the hike in terms of route finding. Wychus Creek was close by and the confluence with the South Fork was nearby. We crossed over to Wychus Creek to look for a decent crossing but the opposite side looked too steep to climb. Not wanting to hike back up the creek we headed down stream. Near the South Fork the ground on the opposite side of Wychus Creek leveled out giving us our best option for reaching the trail on the other side. We had managed to stay dry up to this point but now there was no getting around the need to wade across the creek. We found a good crossing where the water was only mid-calf deep and crossed the creek. From there it was a short climb up out of the canyon. We re-found the trail about 10′ from where we popped up over the hillside. It had been a successful hike despite the forgotten maps. We relied on the GPS, my notes, and the research done beforehand which was a good reminder to always be prepared. Happy Trails!