We had set our alarms for 5:30am hoping to get a jump on the day and be ready to start hiking as soon as there was enough light. The forecast had called for increasing chances of rain as the day went on and we had watched an increase number of clouds fill the sky the night before including some low clouds descending to the tree tops around the Tenas Lakes. When we stuck our heads out of the tent we were pleasantly surprised to see a sky filled with stars overhead. We turned our MPOWERED Luci inflatable solar lantern on and began packing up. As we cooked breakfast and finished packing the sky filled with color. 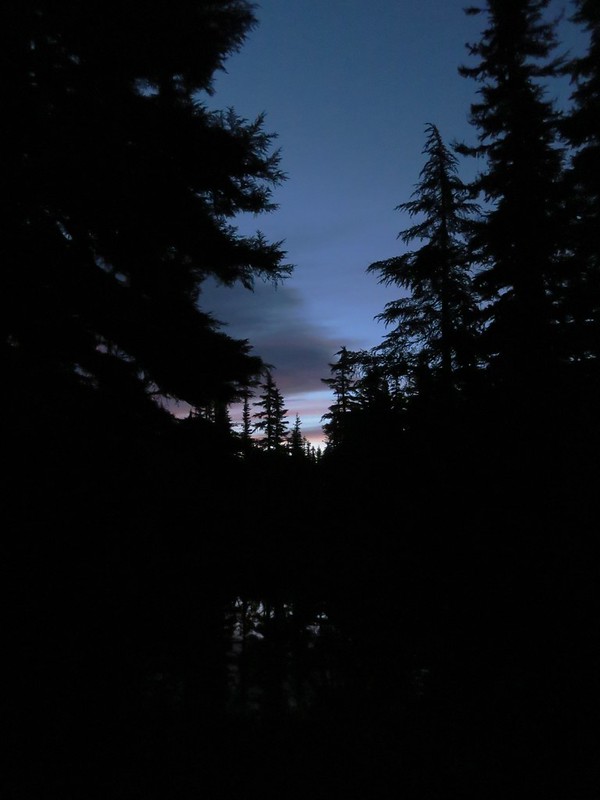 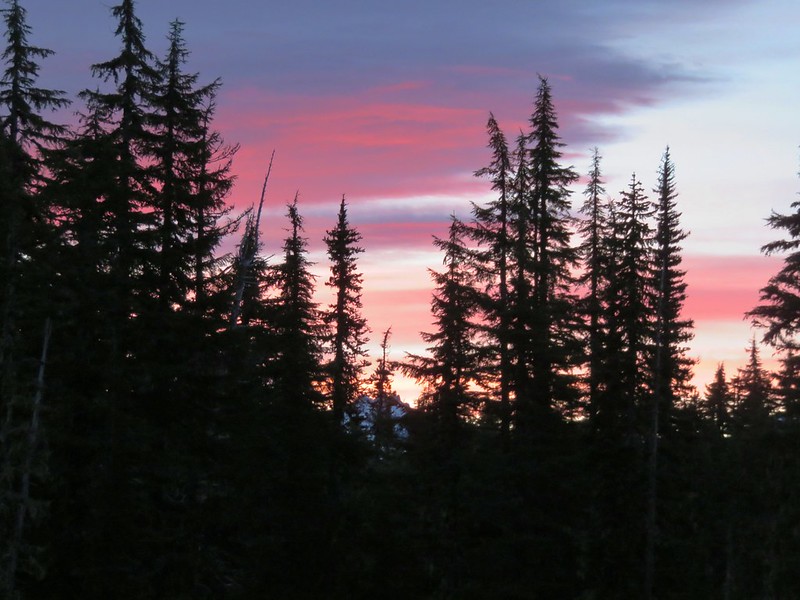 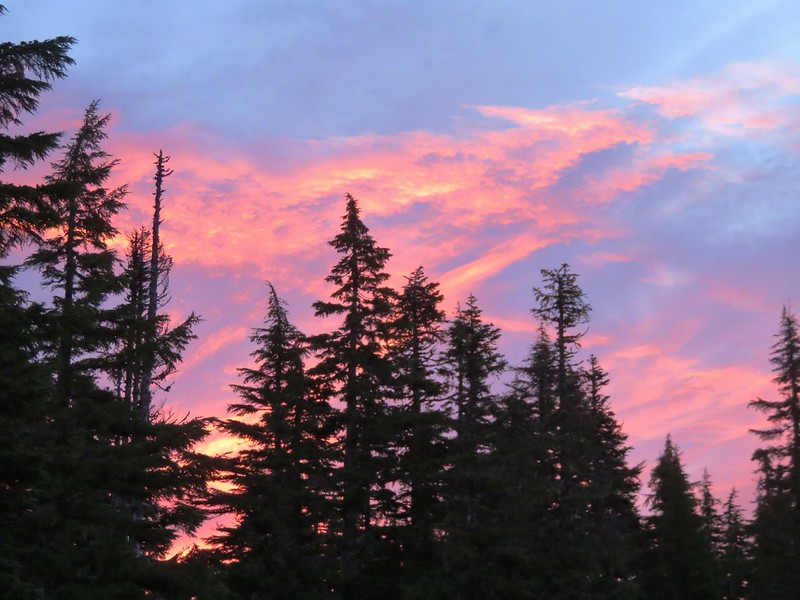 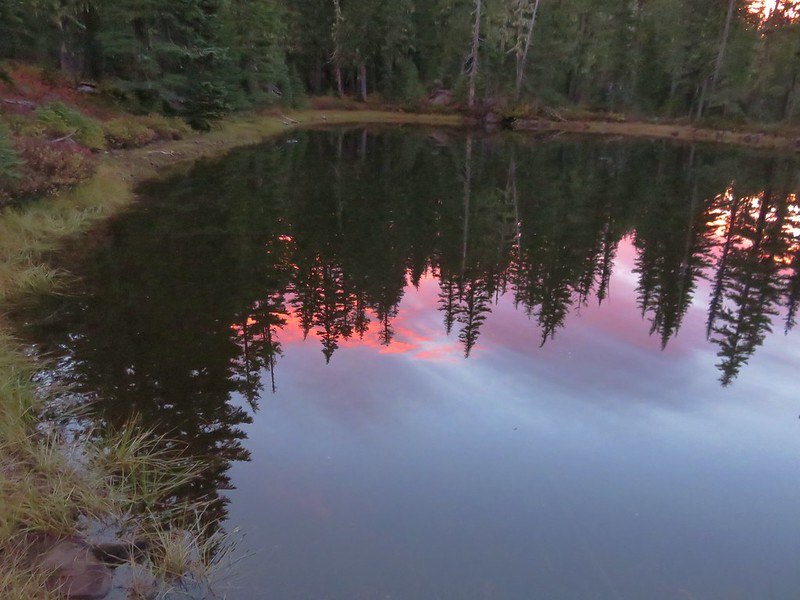 We began hiking shortly after 7am returning to the Benson Trail where we headed north .2 miles to the Scott Mountain Trail. Scott Mountain was already catching the morning sunlight as we approached. 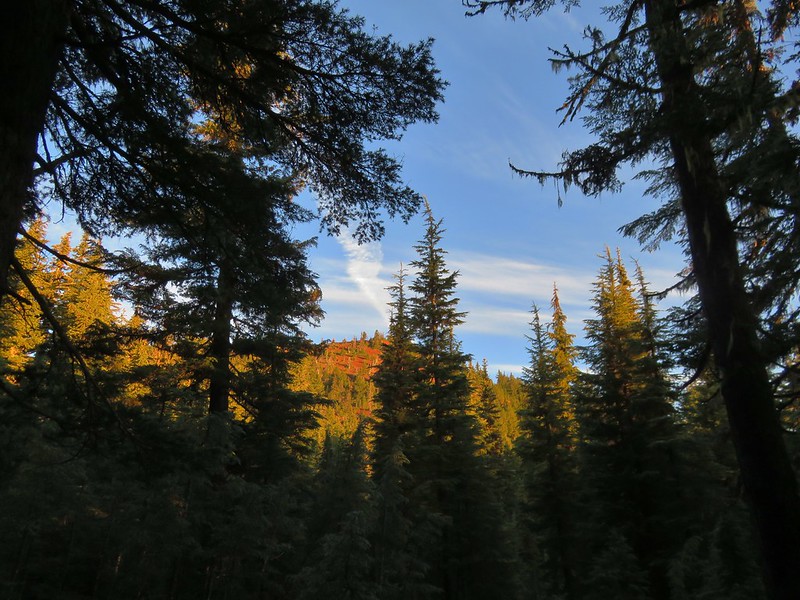 We momentarily considered heading back up to the summit, but neither of us really felt like hauling our full backpacks up the steep trail. We settled for the few views along the trail below Scott Mountain where the Three Sisters appeared cloud free through the trees.
North Sister 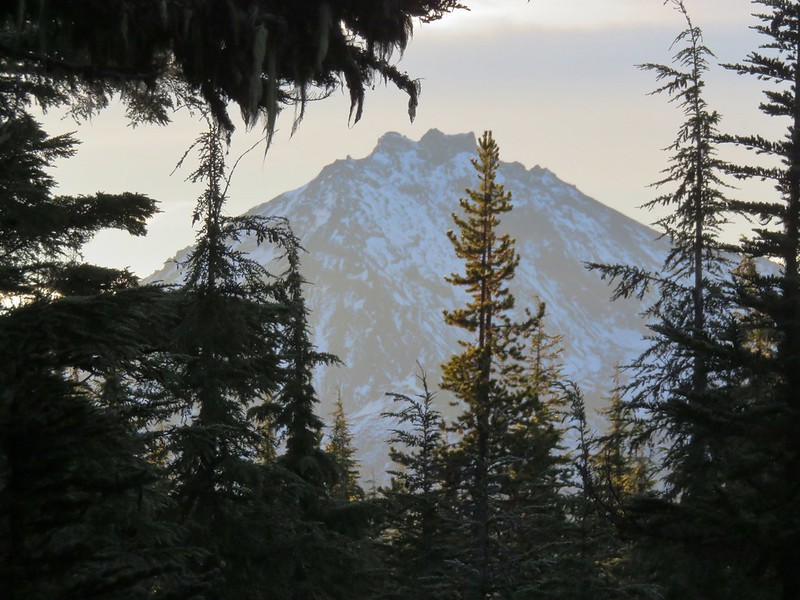 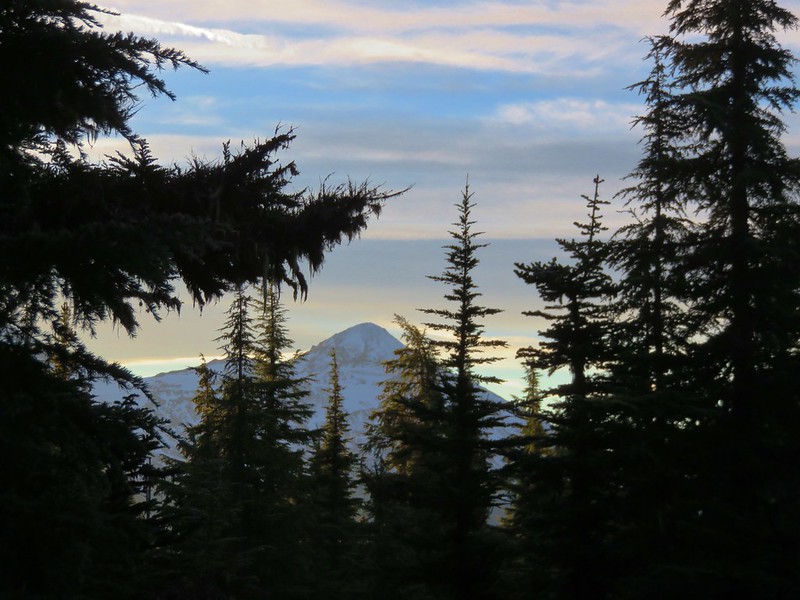 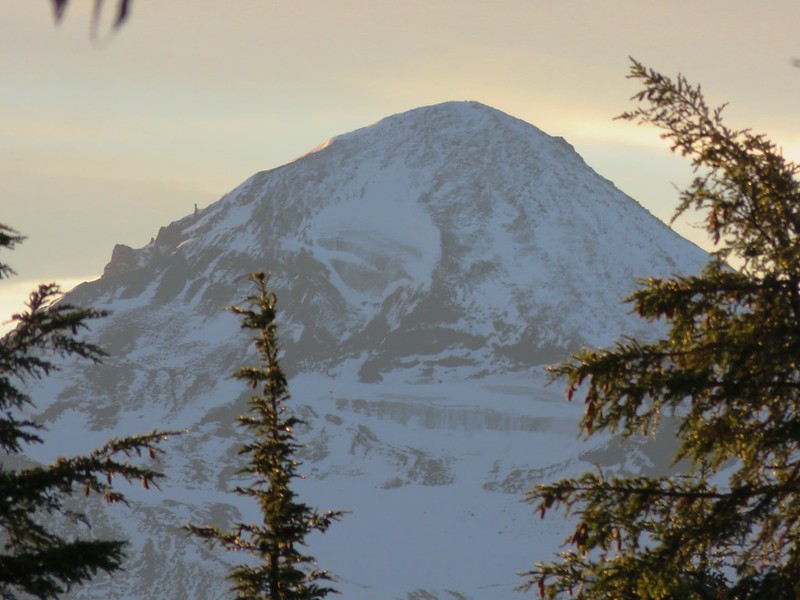 After a mile on the Scott Mountain Trail we took the Scotty Way Trail and began descending toward the Hand Lake Trail. 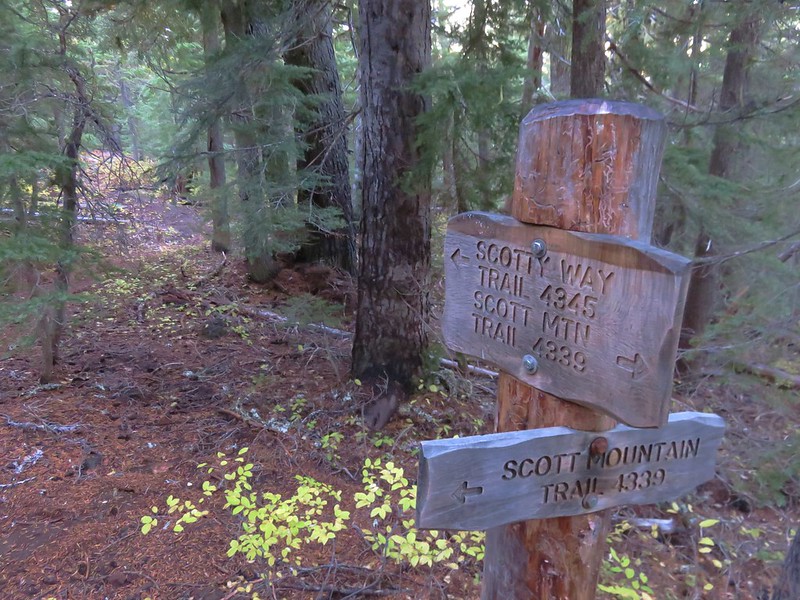 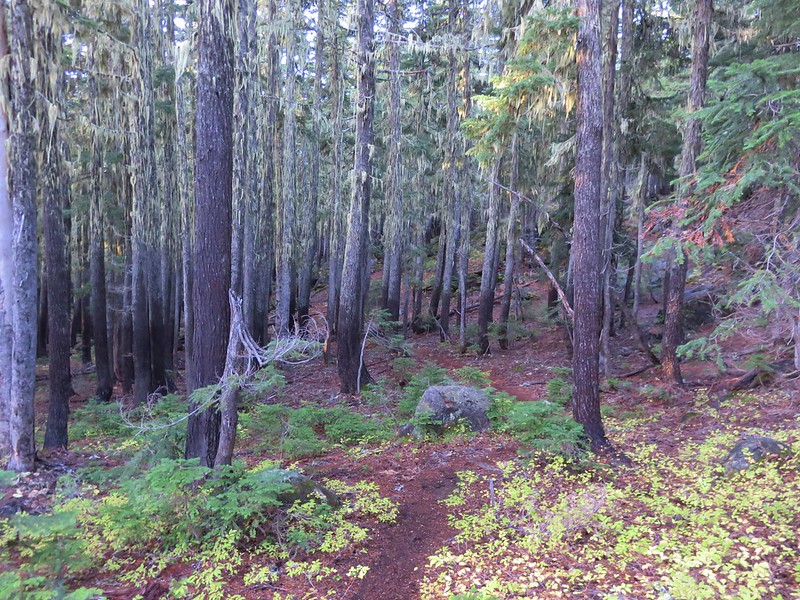 We followed this trail approximately 1.7 miles to its end at the Hand Lake Trail where we turned left. 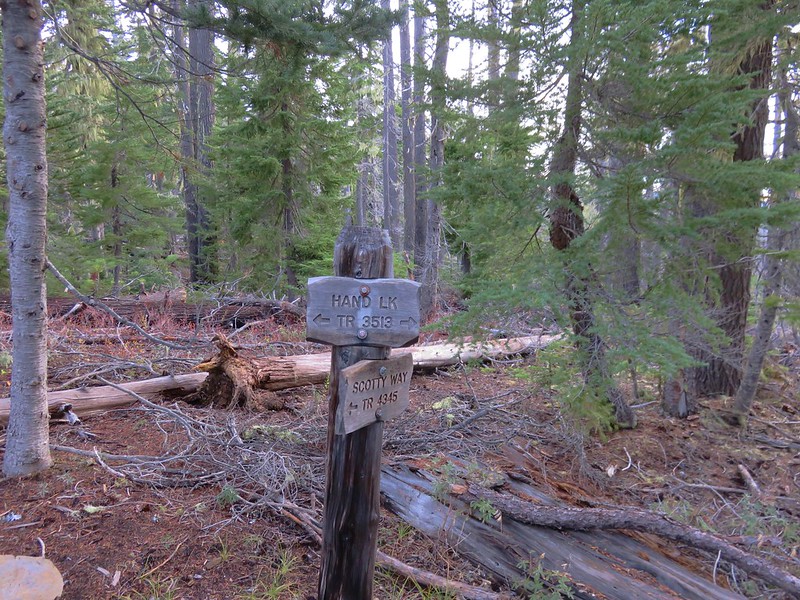 As usual I had checked the Forest Service websites for the trails that we would be using a couple of days before our trip to make sure there were no closures or alerts we needed to be aware of. The Willamette National Forest page for the Hand Lake Trail listed the current conditions for the Hand Lake Trail as ” open and cleared” as of 7/22/2016.
What part of this picture is “cleared”? 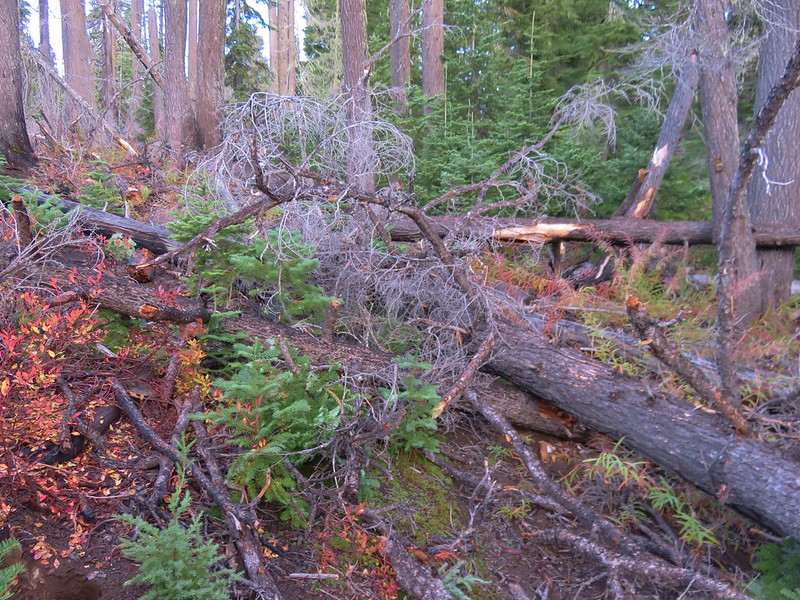 For the next two and a half miles the trail (when there was one) passed through burnt forest with faint tread and a good deal of blowdown. For awhile we were able to follow tracks left by a horse; that helped keep us on the right course. 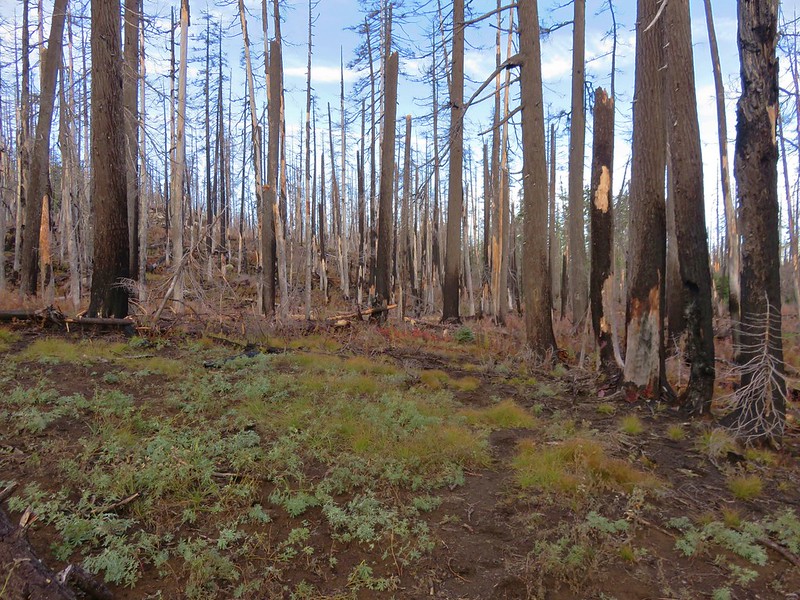 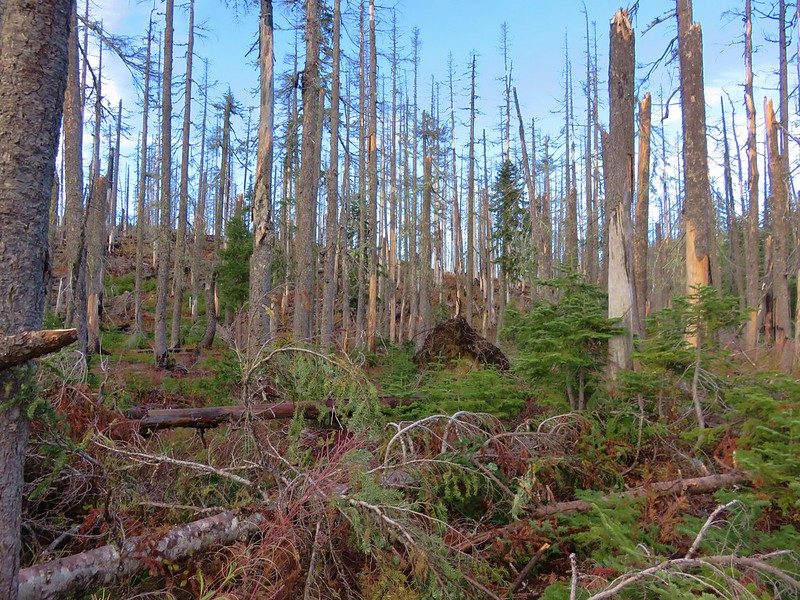 When we weren’t searching for the trail there were some decent views.
Black Crater and North & Middle Sister 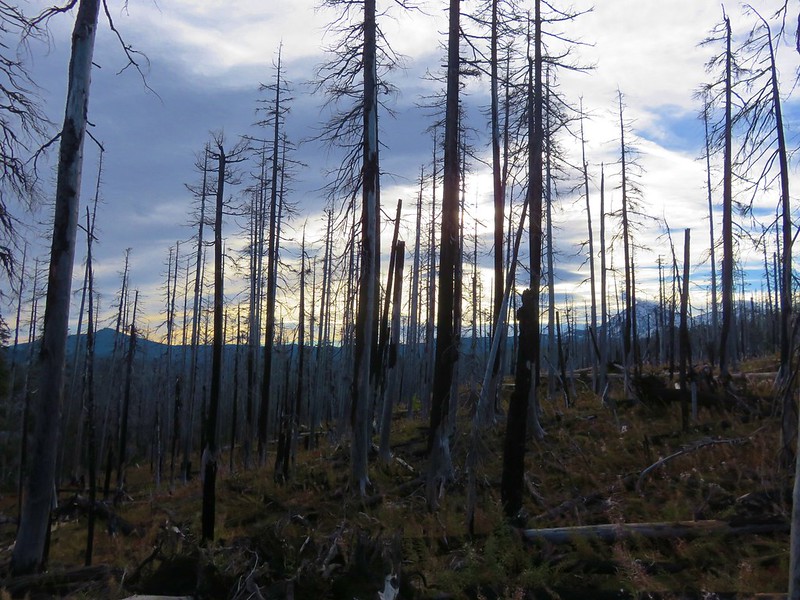 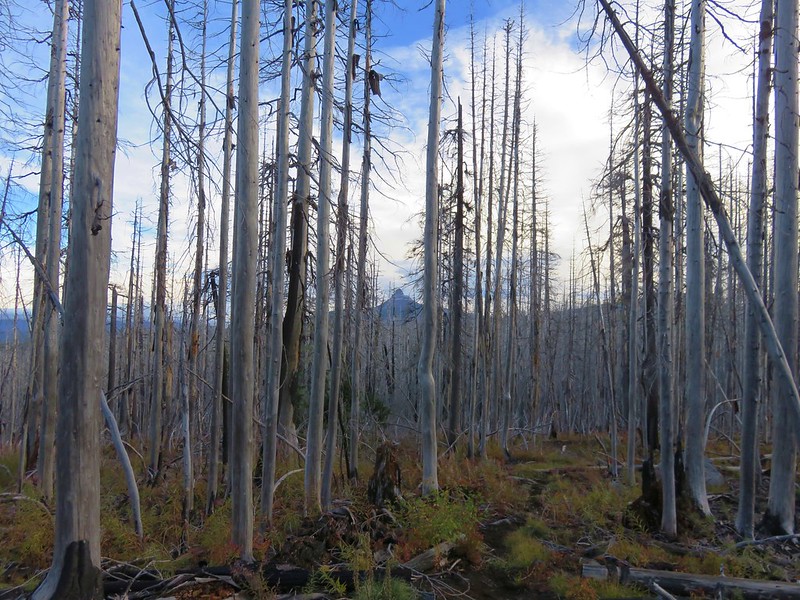 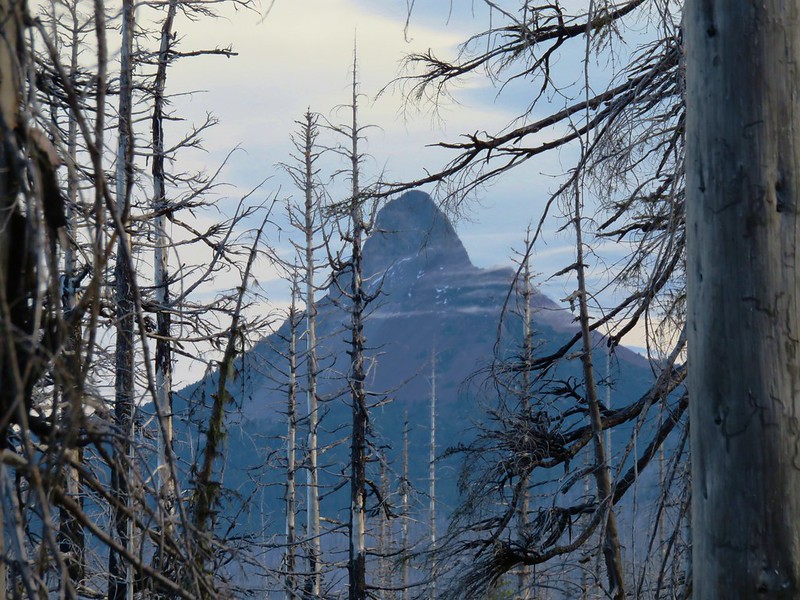 After approximately 1.75 miles we lost the hoof prints and were forced to make a wide arc to the south away from where the map showed the trail should have been. We were coming up on a steep drop down into a basin where the map showed the trail descending in a series of six switchbacks so using the Garmin we worked our way back toward the location where the switchbacks began on the map. 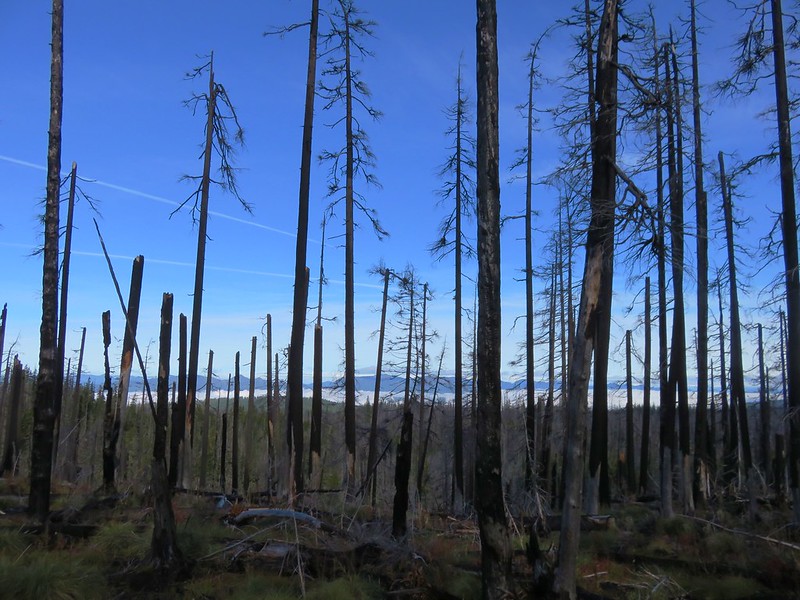 With no obvious trail visible we searched around a bit and found what may have been part of the original trail but now it appeared to be a simple game trail from the amount of deer and elk sign we were seeing. 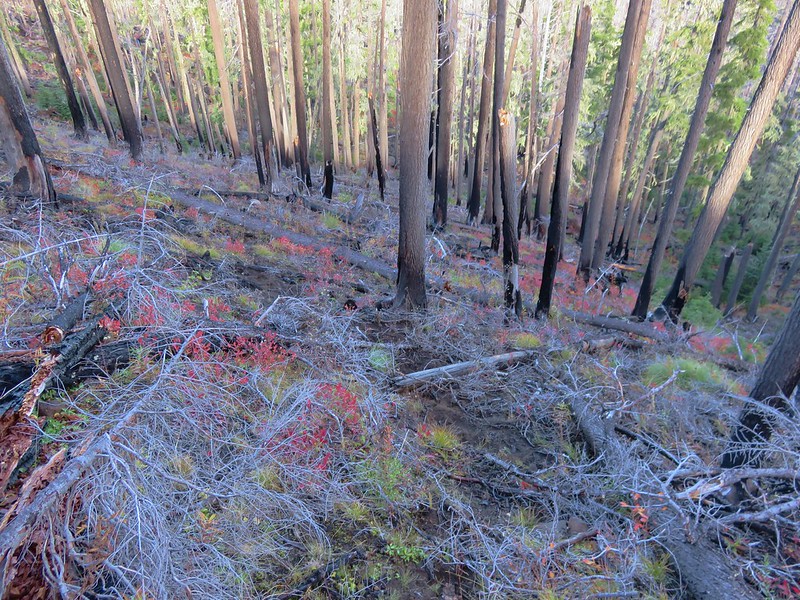 In any event it was the only trail in sight so we followed it steeply downhill reaching the basin where we were able to relocate the actual trail near an unnamed lake. 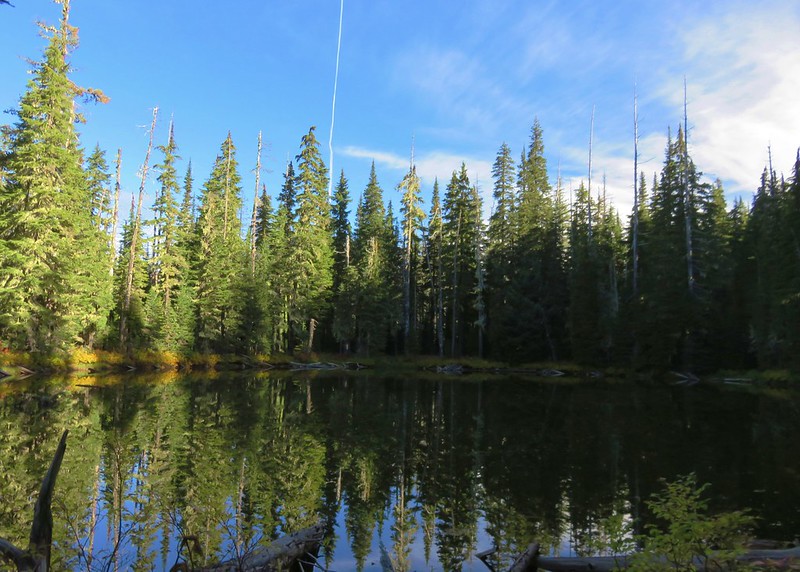 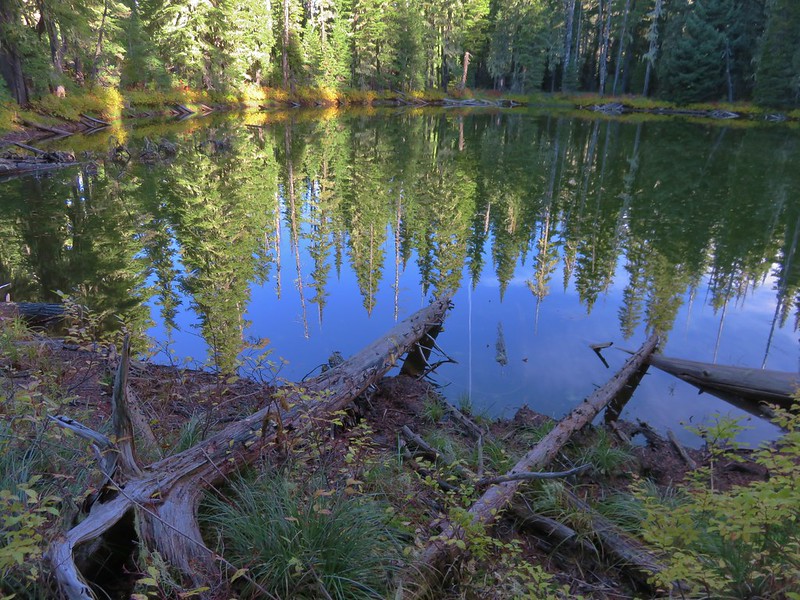 After another quarter mile of faint trail and blowdown we entered unburnt forest on a much clearer trail. 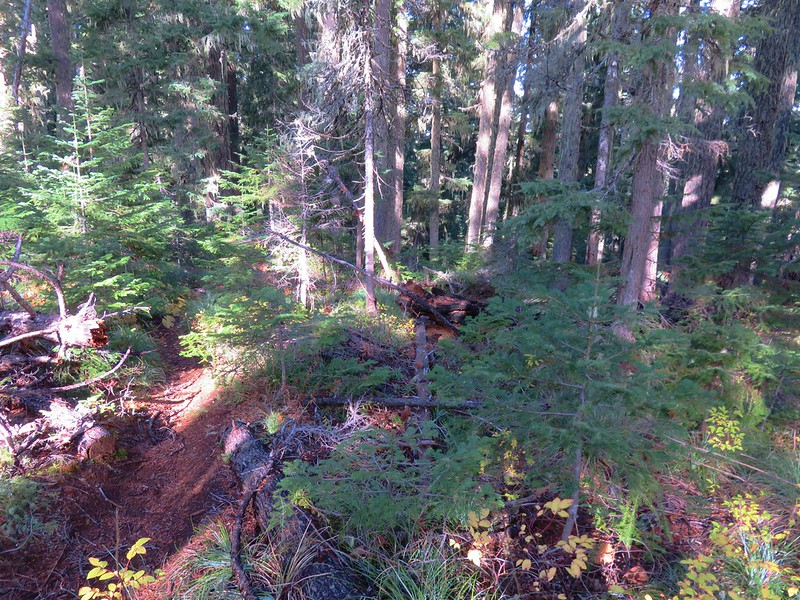 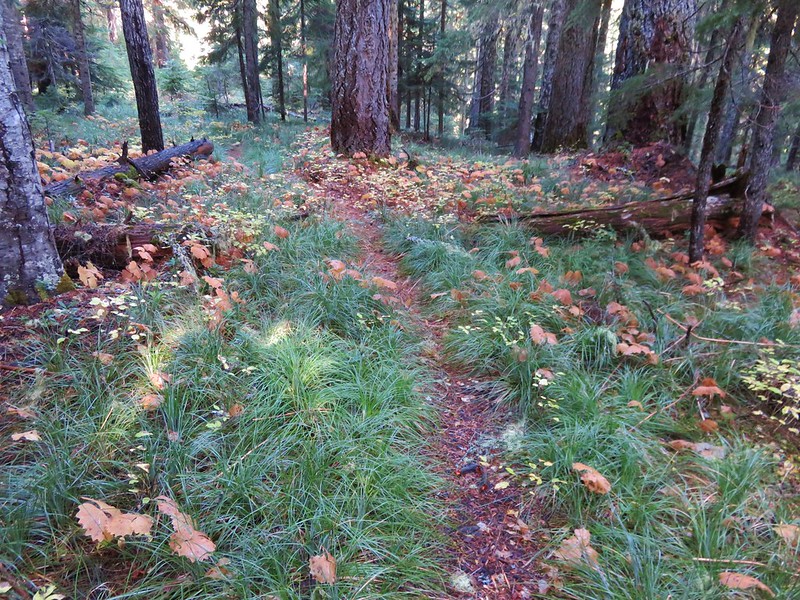 A mile and a half on this nicer trail brought us back to the junction with the Deer Butte Trail we had passed the day before. 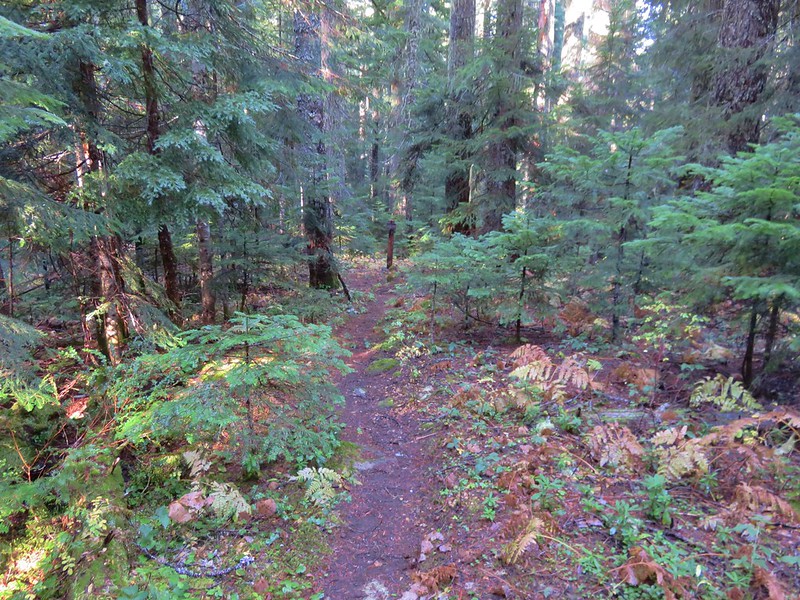 We followed the Deer Butte Trail just over two and a quarter miles back to the Robinson Lake Trailhead ending our final backpacking trip of the year. 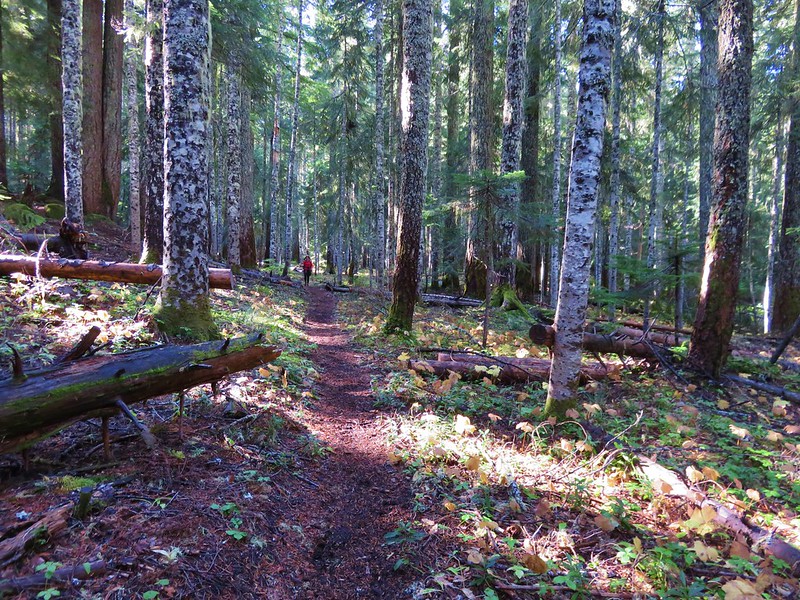 The distance from Tenas Lakes back to the Robinson Lake Trailhead came to 8.9 miles according to the GPS which was almost a mile further than we had expected, but we hadn’t planned on wandering back and forth trying to keep on the Hand Lake Trail. Had we known what a mess that 2.5 mile section was we wouldn’t have even tried it, but we made it and it was another chance to put our navigational skills to the test. Happy (blowdown free) Trails!