They say timing is everything. I don’t know if I’d go that far, but it certainly can make a difference in hiking. The time of day, of week, and of year can greatly impact the experience on any given trail. That was certainly the case on our recent visit to the Three Sister Wilderness. The plan was to hike to Separation Lake and back, a 13.7 mile trek. While I was planning the hike though I got to thinking that the trailhead was awfully close to the Proxy Falls trailhead on the Old McKenzie Highway (Hwy 242). Proxy Falls was a hike that we had been wanting to do at some point, but at only 1.7 miles it didn’t warrant the 2:45 minute drive. It was only about 11 miles from our turnoff on Foley Ridge Road for the Separation Lake Trail though so we decided we’d do the loop there as a warm up for the longer hike.

Proxy Falls is a very popular hike. The trailhead is located along the highway, the distance is manageable for hikers of all ages and types, and most importantly the falls are quite impressive. During the summer months the parking spots fill quickly, but on this day we were by ourselves when we arrived at 8am. The old highway is closed during the winter months and doesn’t reopen until June, but just a couple of weeks ago the first snow gate had been opened on the west end allowing access to the trailhead. The Proxy Falls trail loops over a lava field and past the two falls before returning to the highway. The falls are the stars of the show, and being the only ones there we were able to explore and enjoy them all to ourselves. 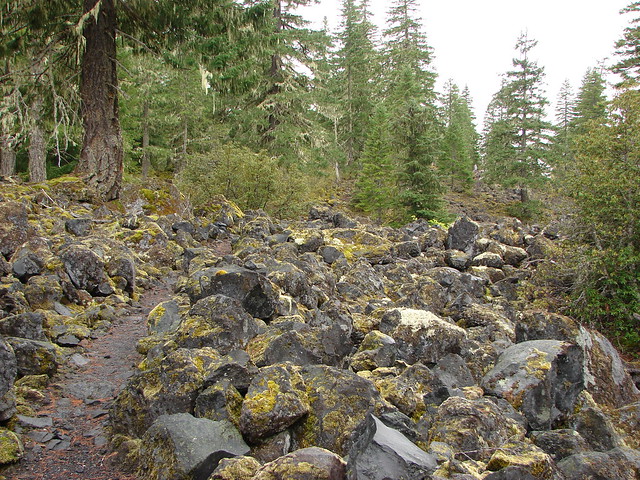 The first fall that you reach is Lower Proxy Falls 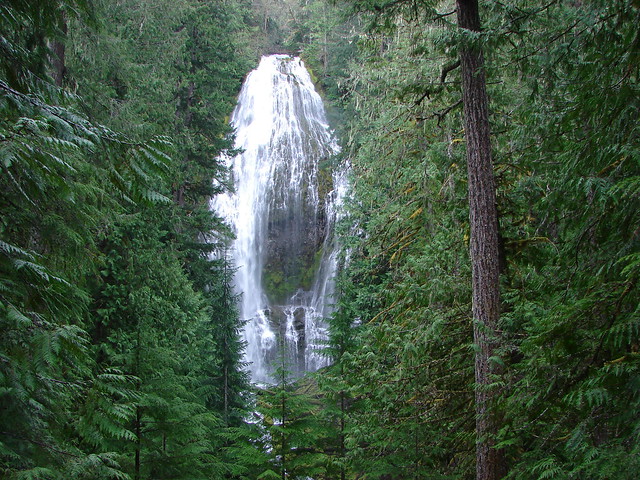 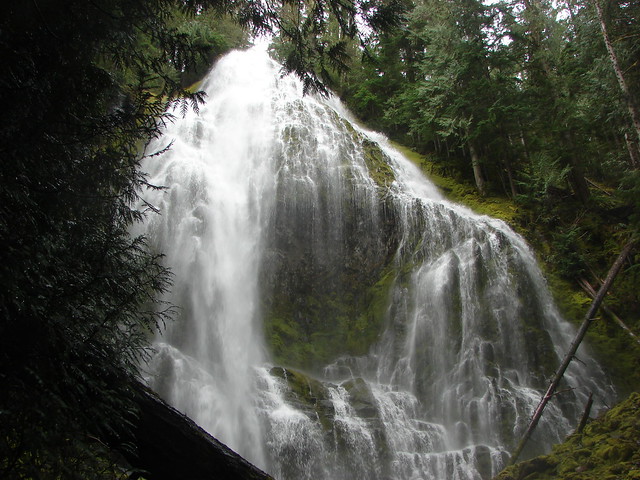 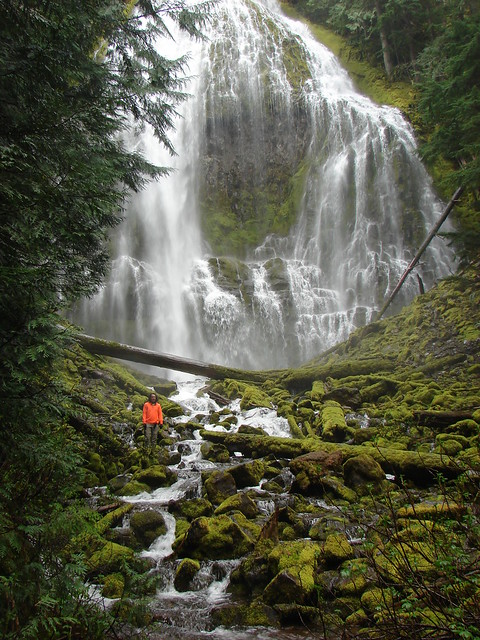 Next up is Upper Proxy Falls. The pool of water at the bottom of the falls flows underground reappearing a few miles away. 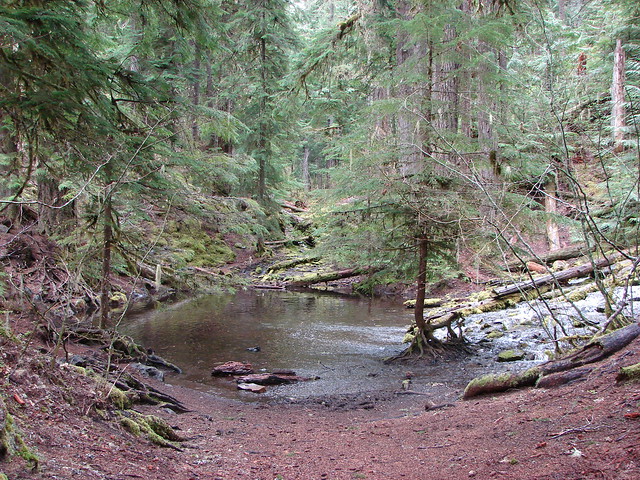 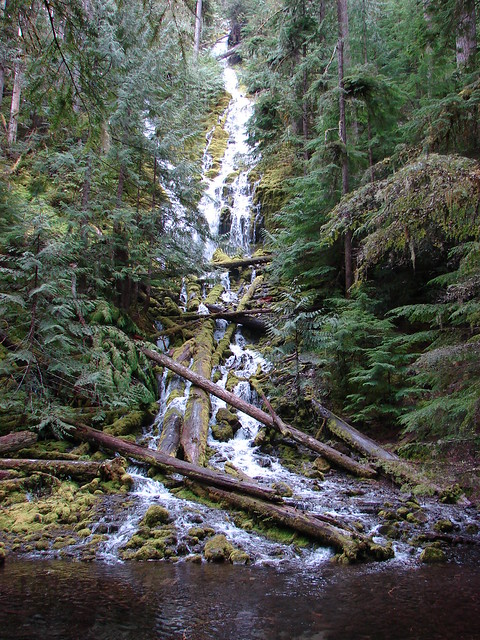 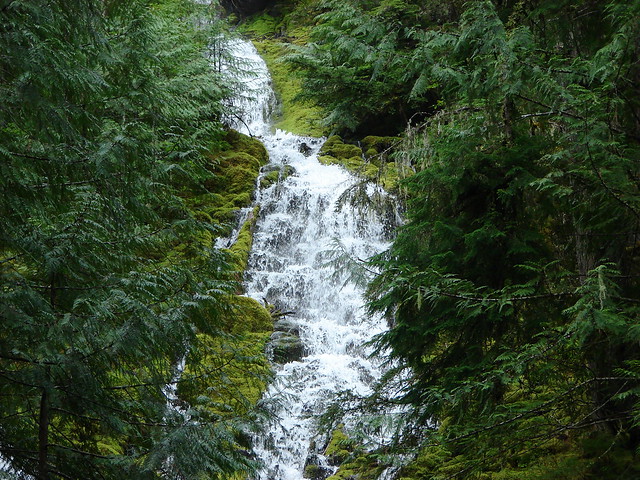 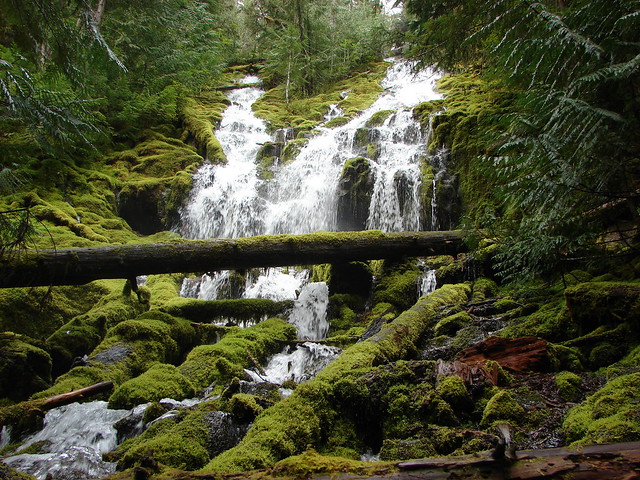 Our timing was great in this case. The falls were flowing very strongly due to the time of year and we had had a very popular trail all to ourselves :). We hopped back into the car and headed back toward the Separation Lake trail for part two of the days hikes.

Unlike the Proxy Falls trail the trail to Separation Lake is lightly used. We weren’t sure what we would find for conditions as it was unlikely the Forest Service had done any trail maintenance since last year. We were once again the only car at the trailhead which suited us just fine. The trail quickly entered the Three Sisters Wilderness as it headed down toward Separation Creek. 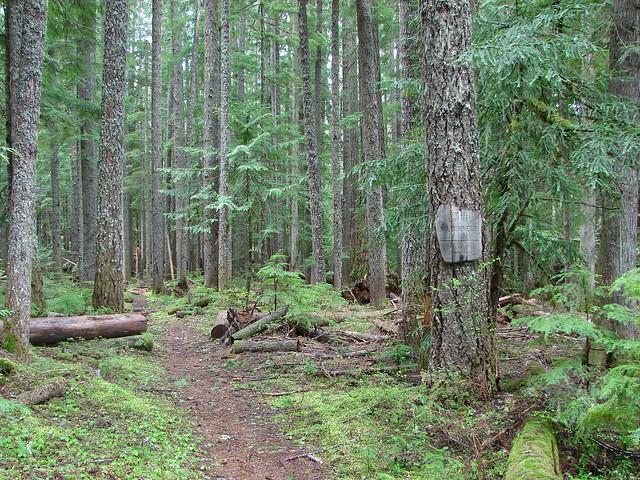 The trail crossed several creeks all of which were easy to manage either on bridges or by rock hopping.
Bridge over Louise Creek 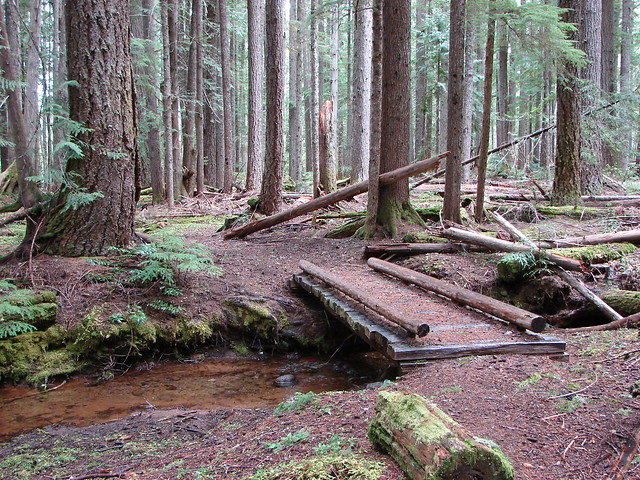 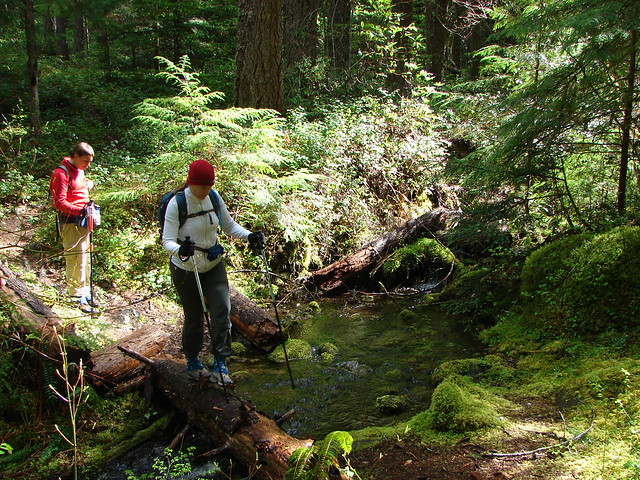 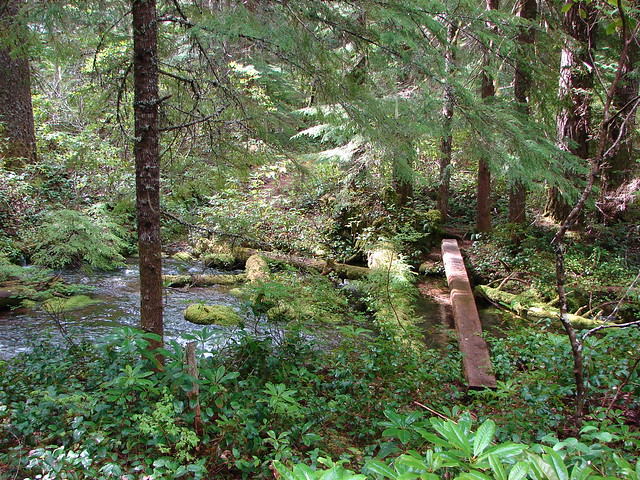 At one point we passed a tree stump littered with pieces of pine and fir cones. We’d never seen such a large pile and kept expecting to see the fattest chipmunk ever nearby. 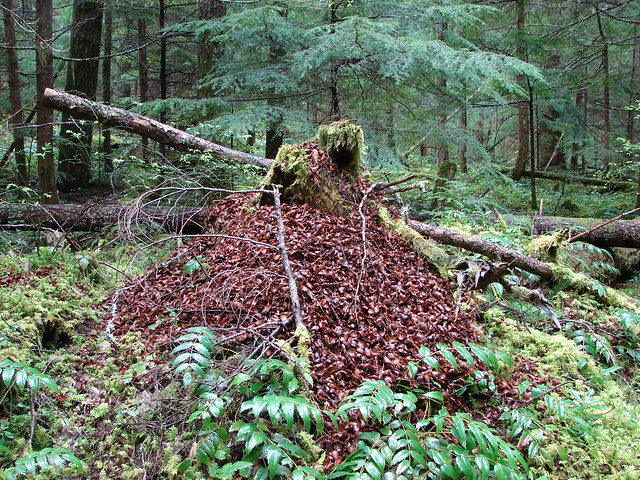 The path was very brushy in places and our feet and lower legs were soaked as we passed through the damp leaves. 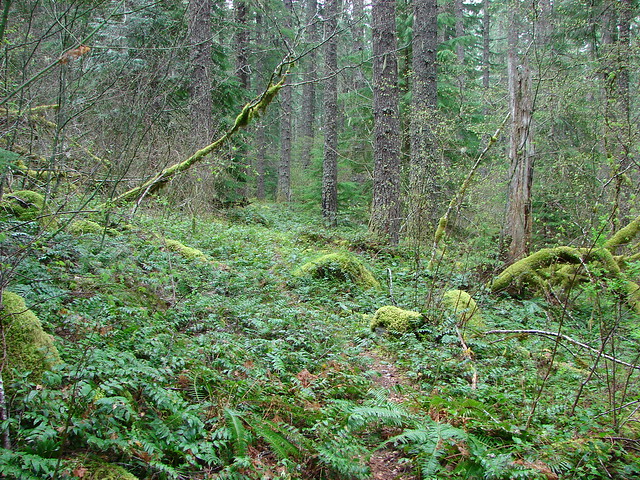 A number of early flowers were out and many of the bushes and trees were beginning to leaf out. 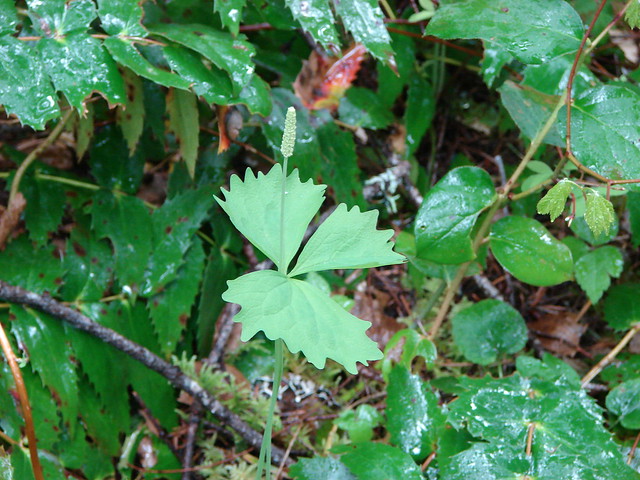 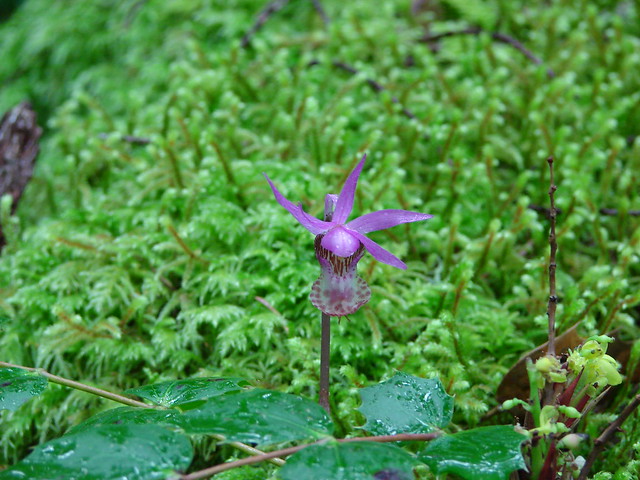 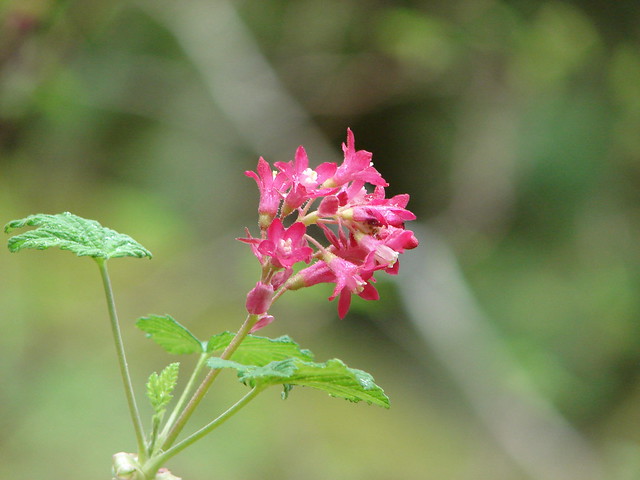 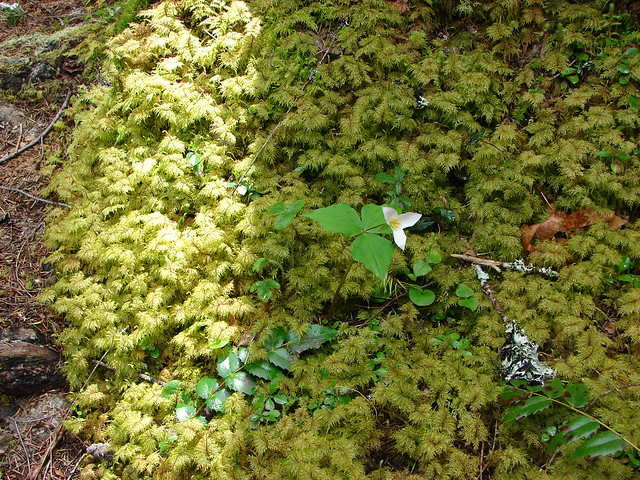 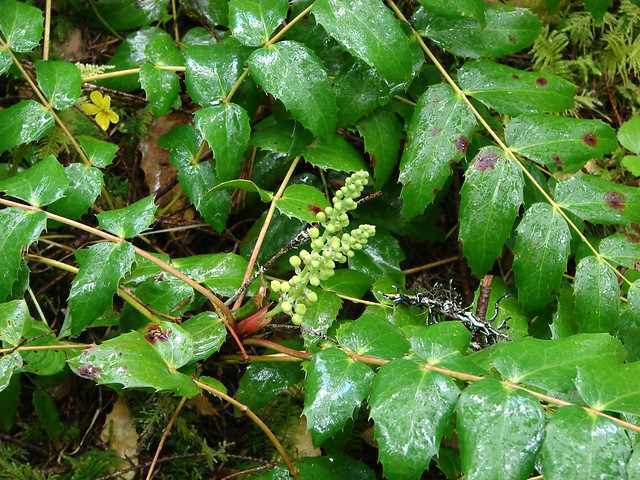 George Creek is the final small creek that the trail crosses before reaching the much larger Separation Creek. This was the most scenic of the smaller creeks at it had a small waterfall at the crossing. 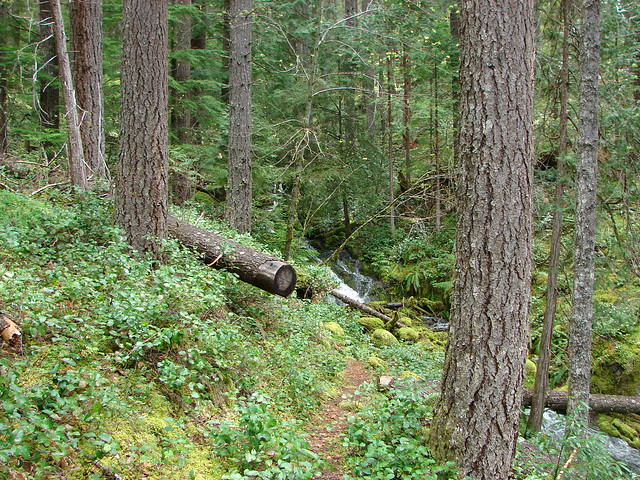 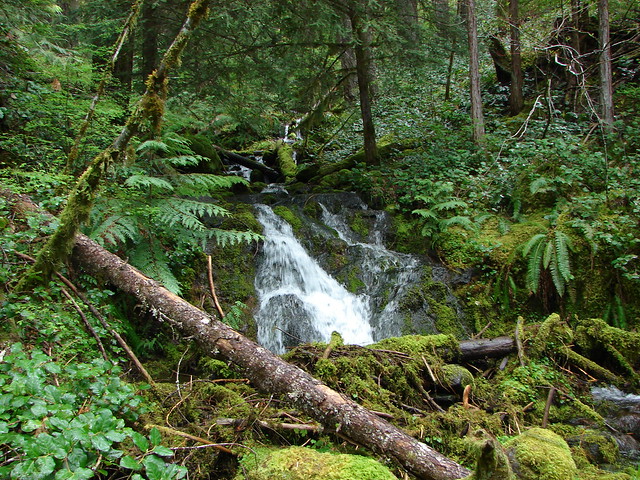 After 3.5 miles the trail finally gains a view of Separation Creek. It looked like a river compared to the other creeks we had crossed. 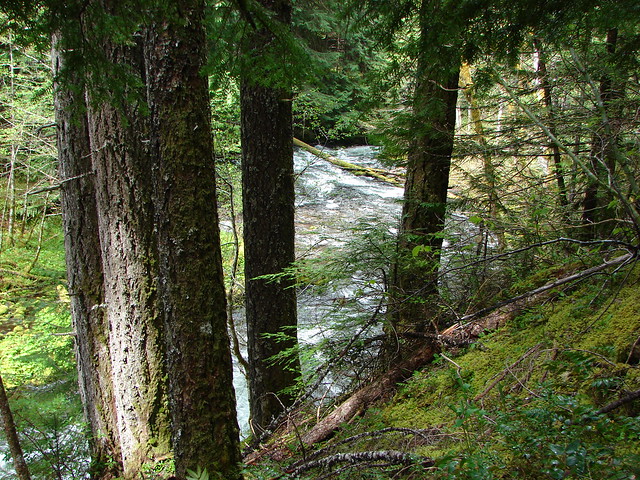 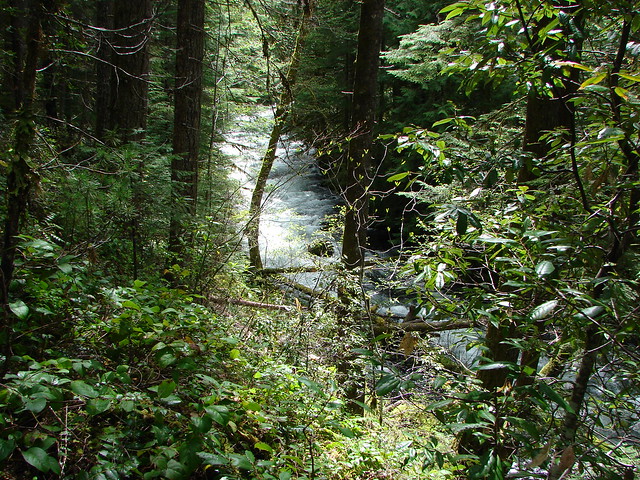 After following along the creek for 2 miles the trail splits. The Separation Lake Trail crosses Separation Creek on a log bridge while the Separation Creek Trail continues on deeper into the Three Sisters Wilderness. That trail is apparently no longer maintained and closed due to excessive downed trees. We crossed over the creek and continued on toward the lake. Not long after crossing the creek we were greeted by the smell of skunk. It wasn’t actually a skunk but rather a marshy area filled with skunk cabbage.
Separation Creek crossing 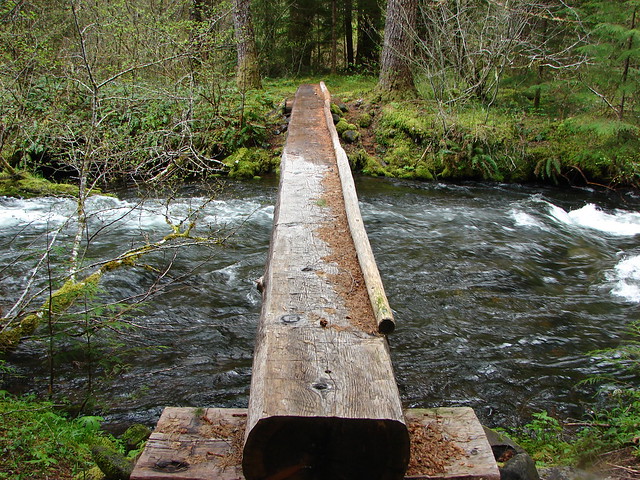 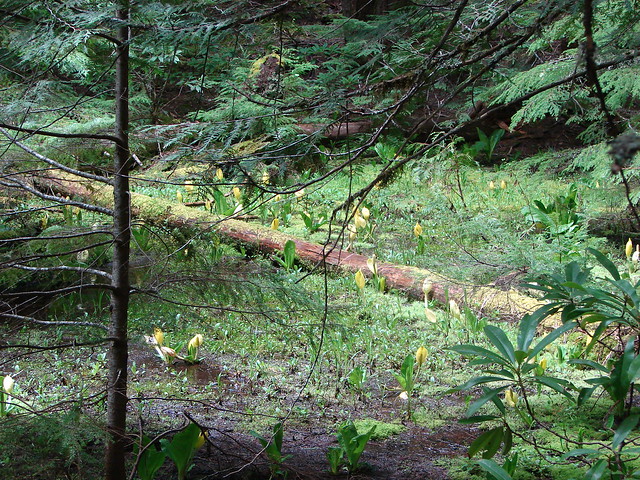 A little over a mile after crossing the creek the trail reaches Separation Lake. It was a nice little lake with a couple of campsites. We were greeted by the usual birds and chipmunks (and a mosquito or two). We took a break here and had a snack at which point a couple of sets of ducks appeared on the far side of the lake followed by an Osprey who was scoping out the small fish that had been jumping in the lake. 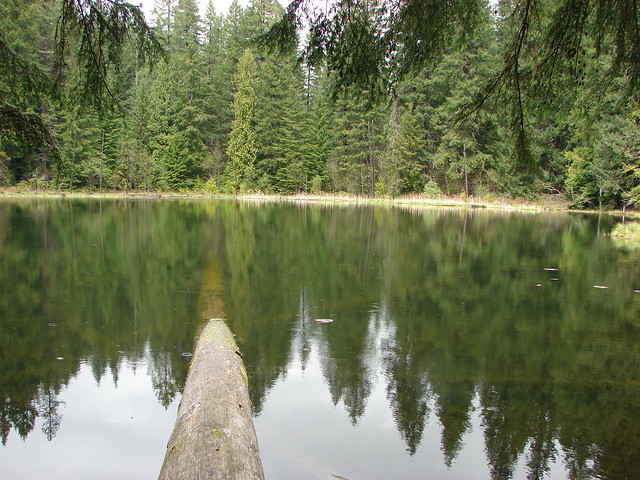 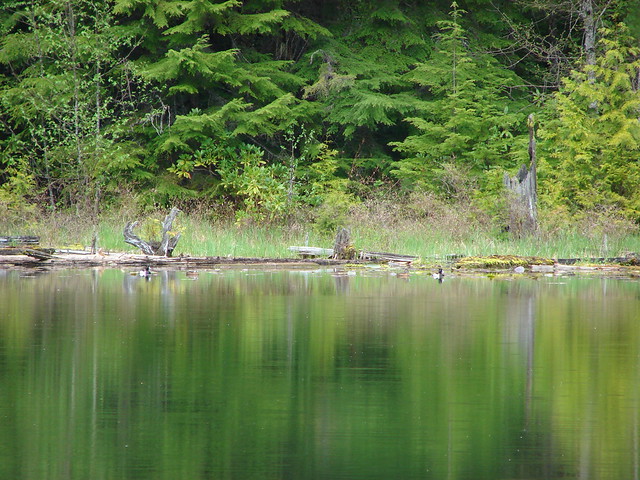 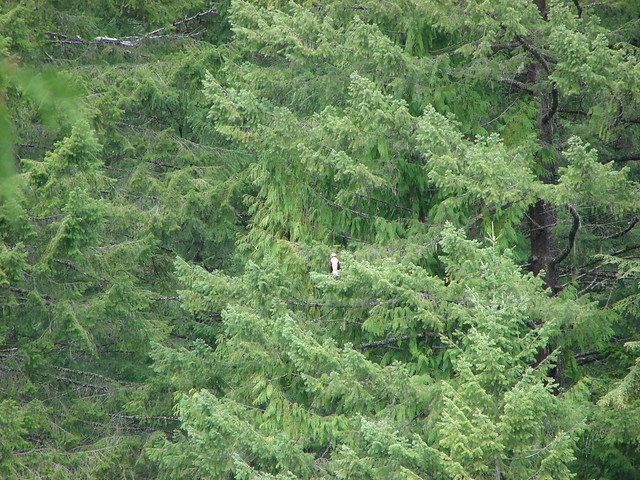 After the food break we strapped our packs back on and made the return trip back to the car. On our way back we finally ran into the first and only other people we would see – a couple and their dog were headed in to camp. We were pretty tired when we reached the trailhead but it had been a great day of solitude in the wilderness. Happy Trails!