It has become a tradition to finish off our hiking year either on the Oregon Coast or in the coast range. This year we targeted a pair of shorter hikes to keep the tradition alive. For the first of these two hikes we traveled to Cascade Head just north of Lincoln City in order to visit Harts Cove where a waterfall spills into the Pacific Ocean. We parked at the Cascade Head Upper Trailhead along road 1861 at a sign post for the Nature Conservancy Trail. A trail here led off for a mile to Cascade Head’s upper viewpoint which we had visited before. In order to find the Harts Cove Trailhead we walked another .9miles down road 1861 where a large parking area with plenty of signs marked the start of the trail. We could have driven here but were contemplating hiking to the upper viewpoint later if the sky cleared so we decided to park at the upper trailhead. 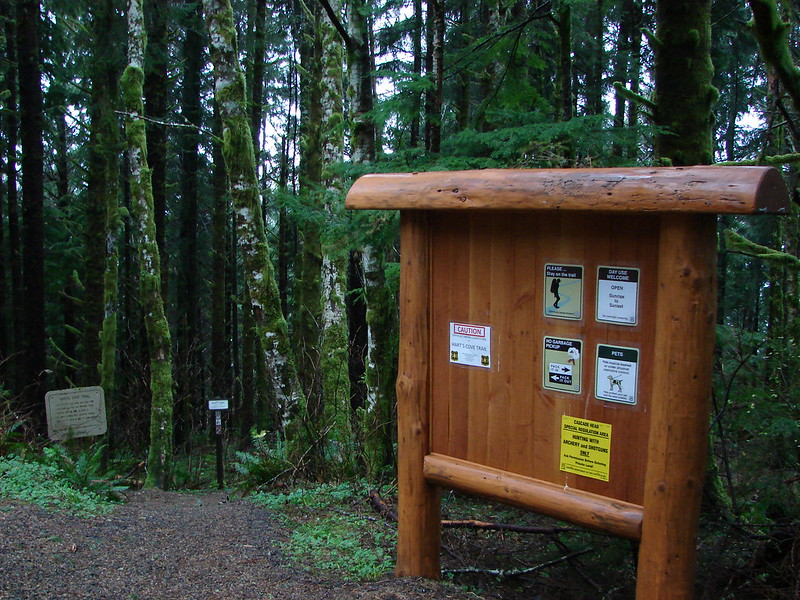 One of the signs warned of difficult hiking conditions on the trail which piqued our interest. 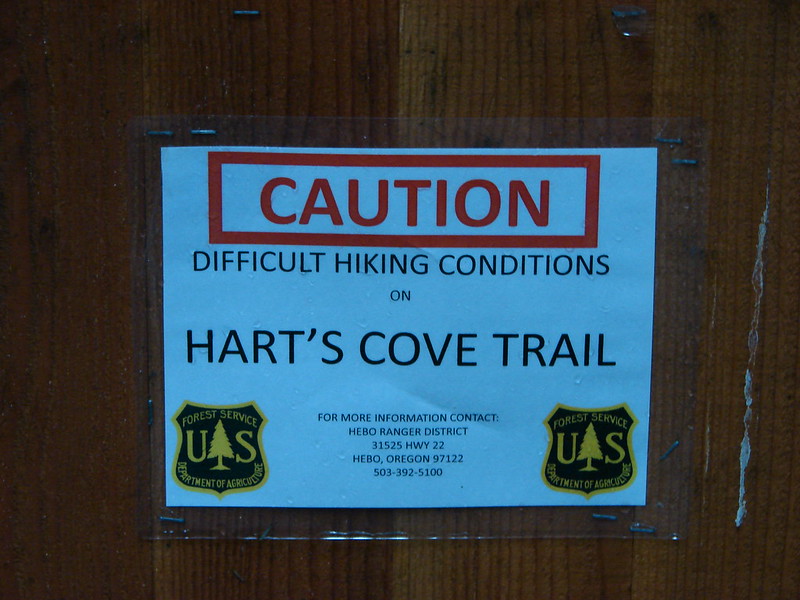 The trail started out by diving fairly steeply downhill through the forest for the first half mile then descended more gradually to a bridge across Cliff Creek. 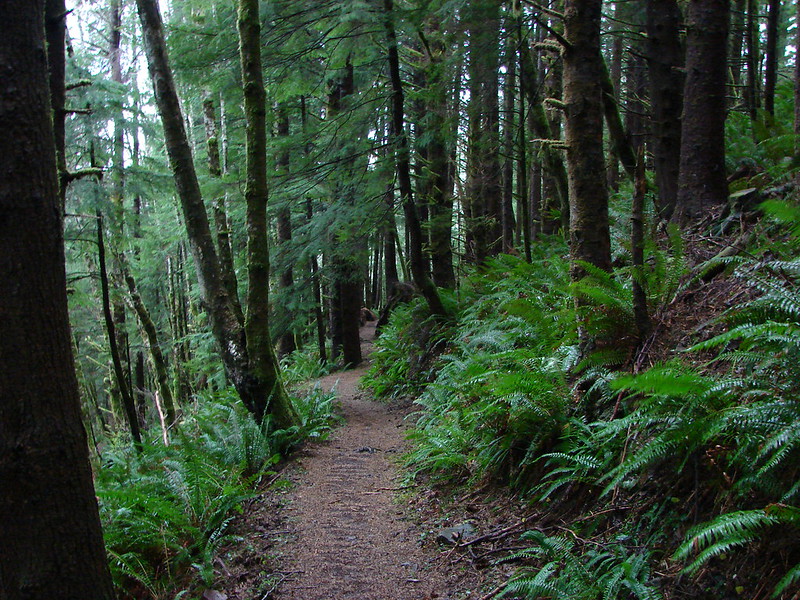 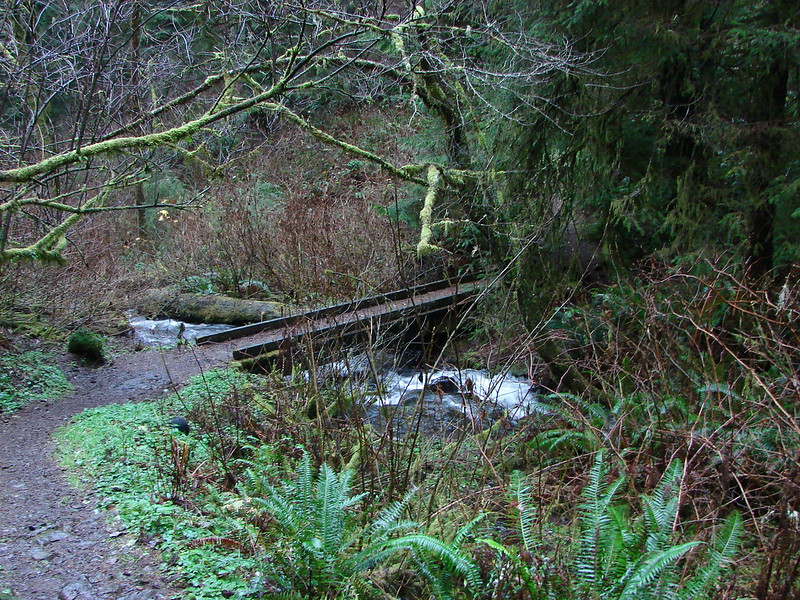 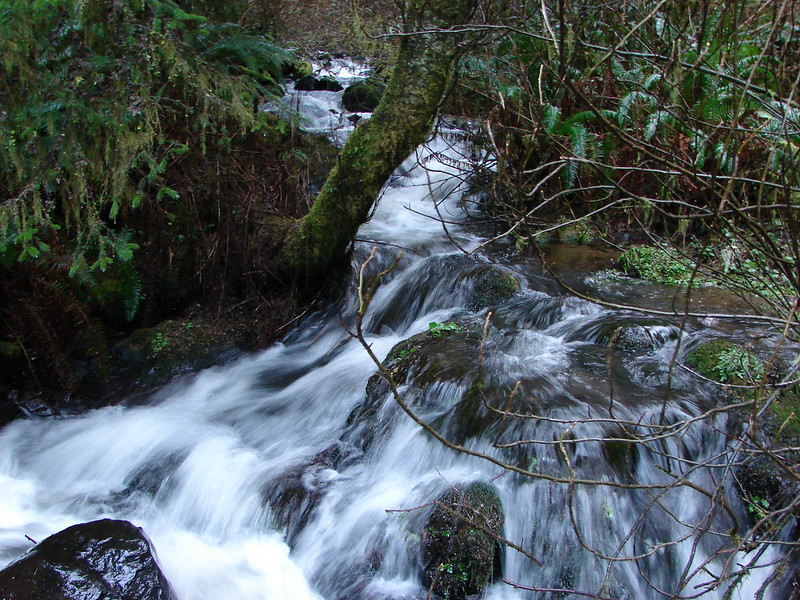 After crossing the creek the trail turned back toward the ocean along a ridge. We could hear a number of sea lions on the rocks below but could only get small glimpses of them across the water through the trees. 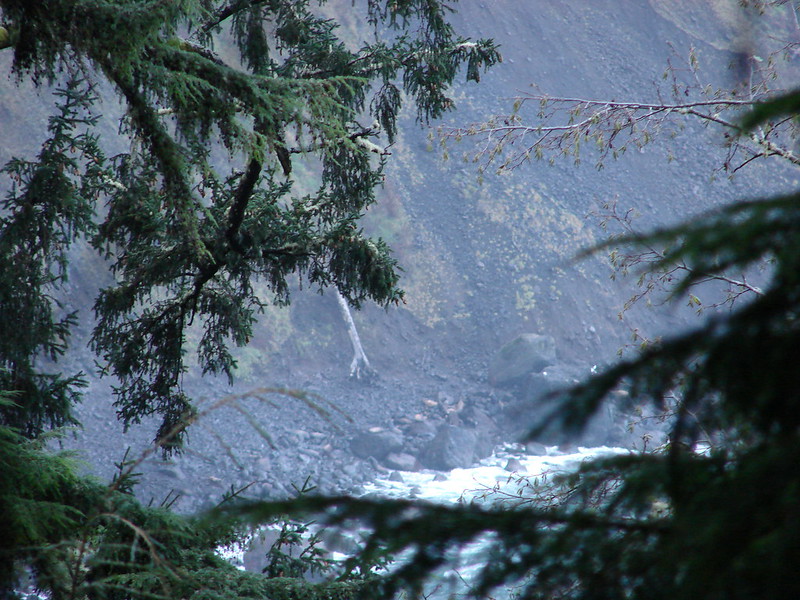 As the trail wound around the ridge end there was a bench that offered an obstructed view across Harts Cove to a meadow which was where the trail would end. The trail then bent back leading us around the cove. We crossed Chitwood Creek which appeared to have once had a bridge but it was now in pieces further down the creek. 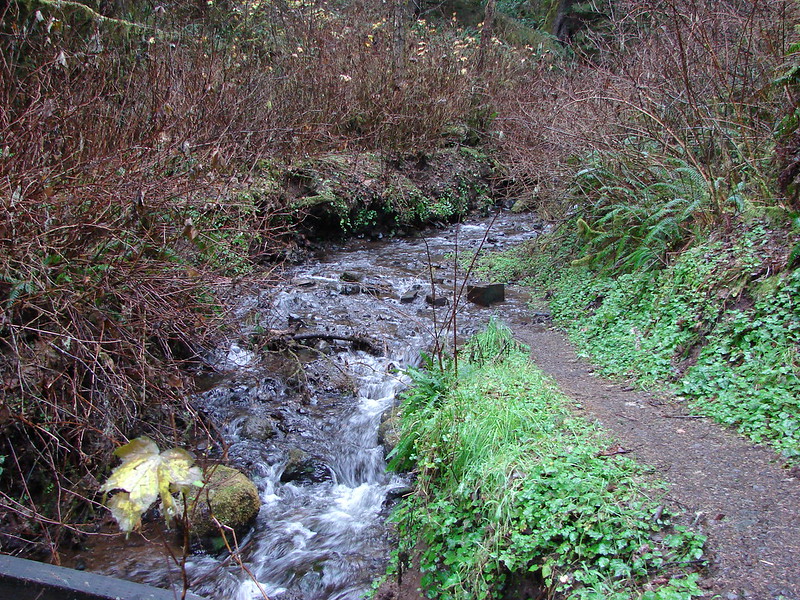 We had been in clouds and fog for most of the hike but as we came out of the forest into the meadow we could see clearer skies out over the ocean. The trail was steep here also and muddy making it a bit slick.
Looking down the trail: 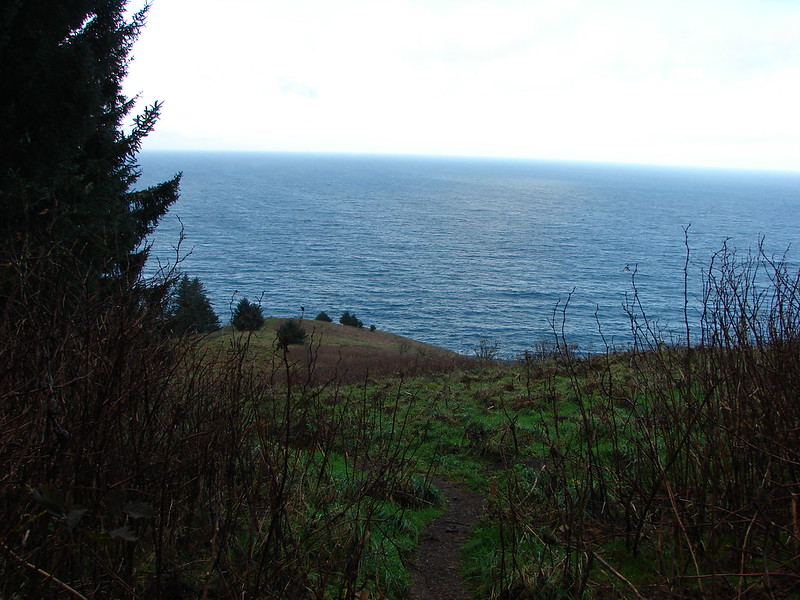 Looking up from below: 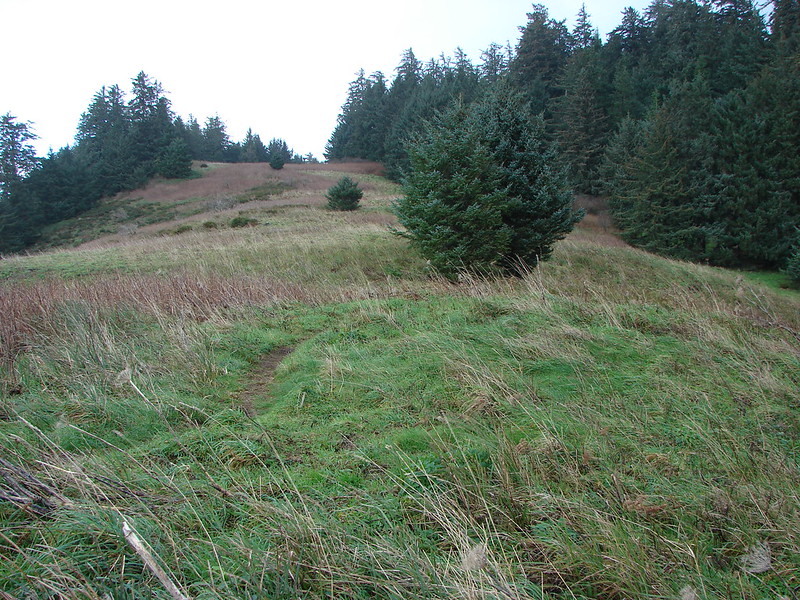 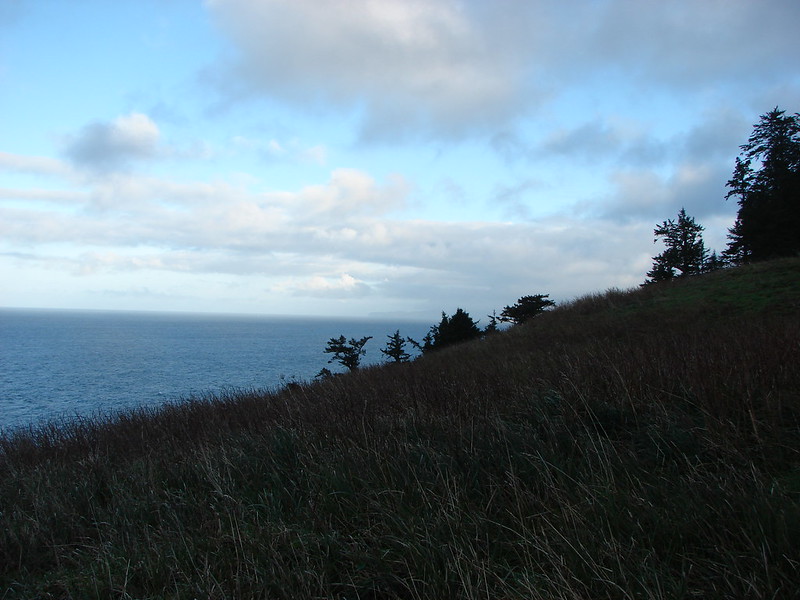 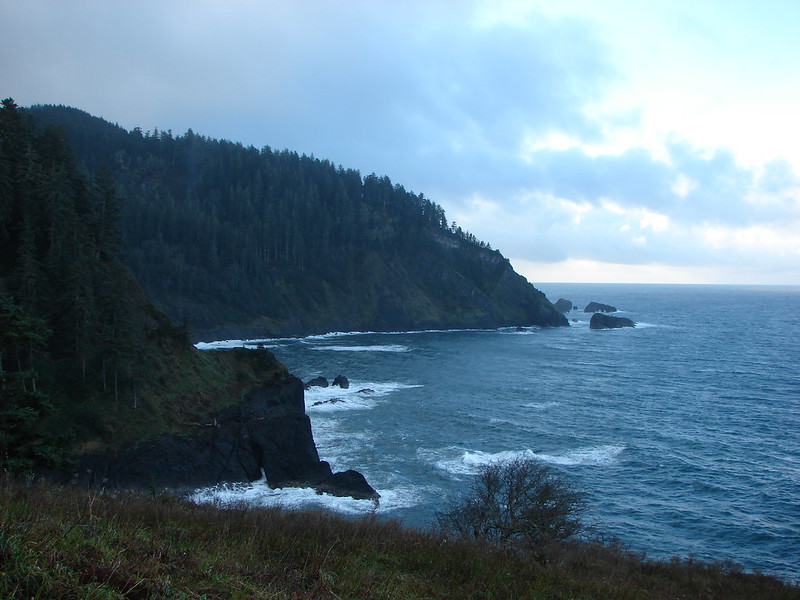 The sea lions could still be heard across the way below Cascade Head, and now we could see them better. 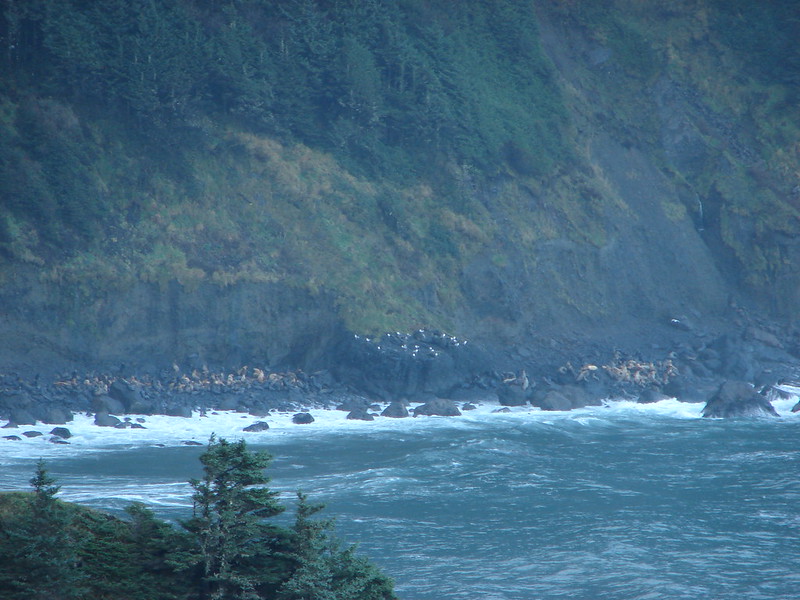 We followed the trail down and around to the left toward Harts Cove so that we could get a view of Chitwood Creek’s waterfall. We were surprised to find a handful of flowers in bloom including a number of Salal bushes. 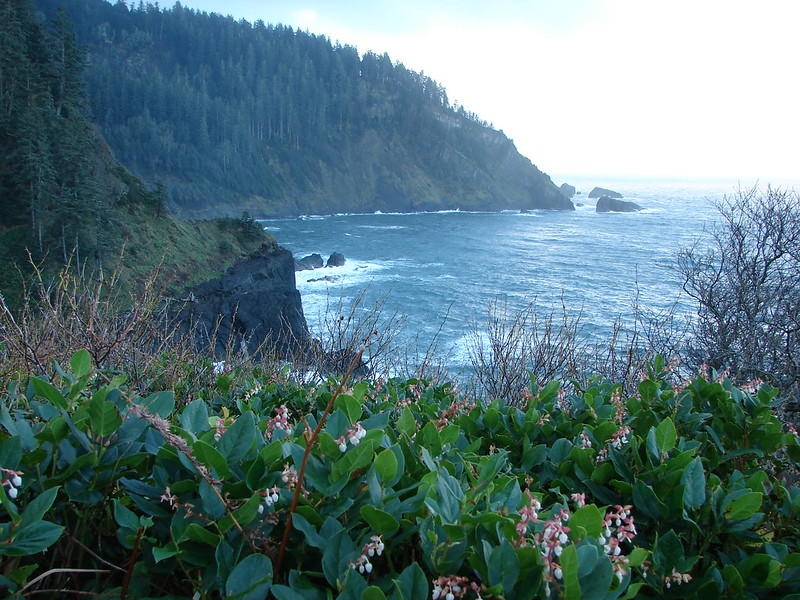 The waterfall turned out to be very picturesque as it fell down into the surging ocean. 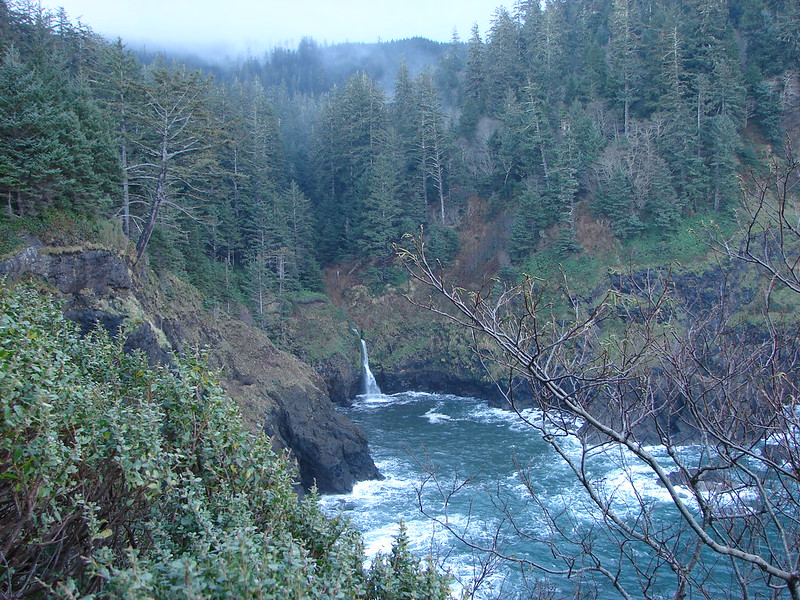 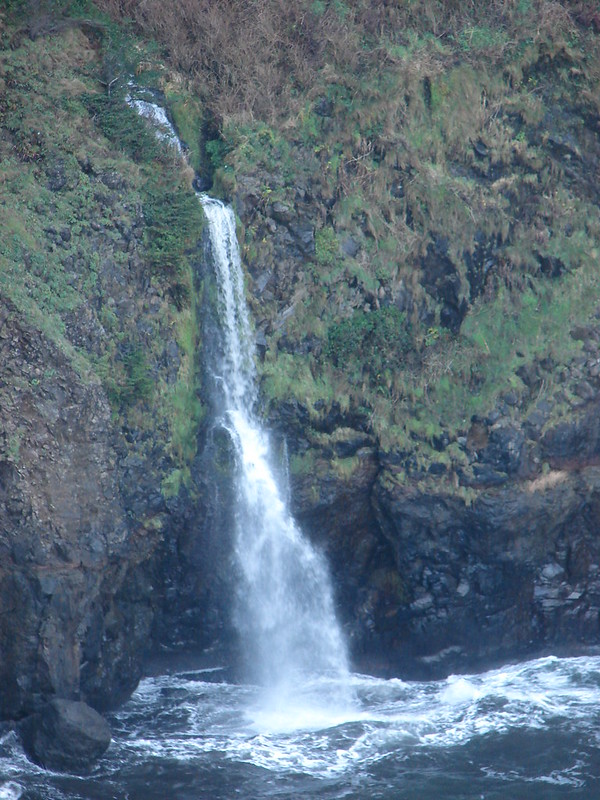 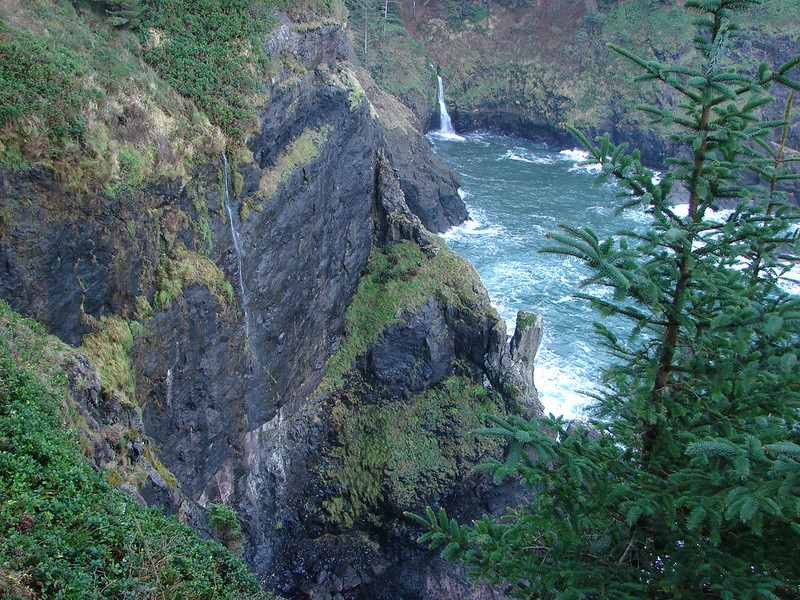 There was a nice open spot below a tree where we stopped for a snack and to remove some of the unnecessary layers of clothes we had on. While we were resting there Heather spotted a hummingbird that was interested in my orange jacket. It was zipping about, landing occasionally and then darting back into the air. I was snapping pictures frantically trying to get some sort of picture before the hummingbird disappeared. I wasn’t sure if I’d managed to get anything until we got home, but I wound up getting lucky with a single shot. 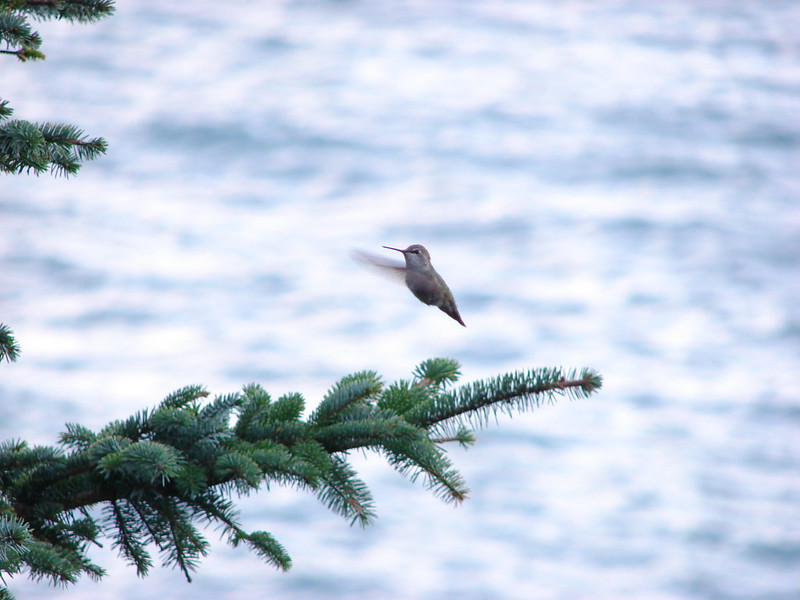 As we headed back up the steep trail we noticed that Haystack Rock near Pacific City was shinning in full sunlight. 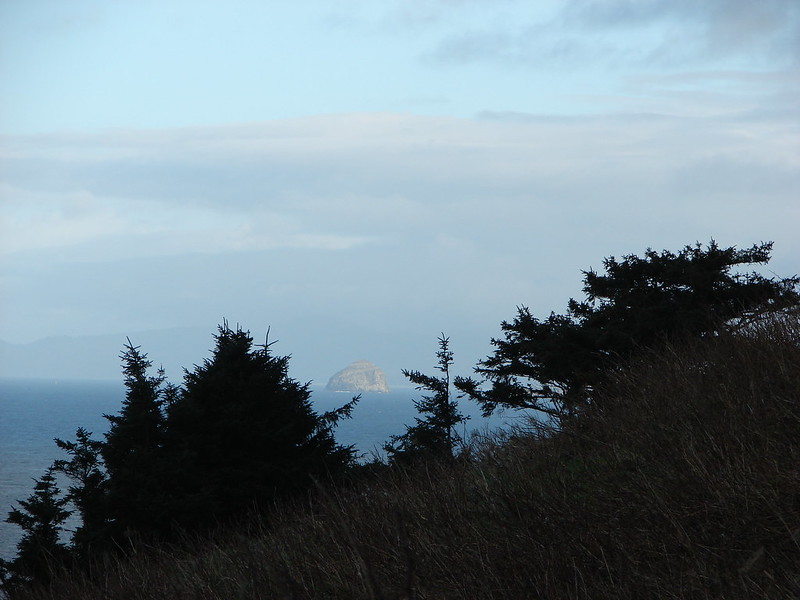 We returned the way we’d come and decided to skip the upper viewpoint because it still appeared to be enveloped in the clouds. This hike had been 7.6 miles which included the unnecessary 1.8 miles due to parking at the upper trailhead.

Our next stop was Drift Creek Falls which is located in the Siuslaw National Forest between Hwy 18 & Hwy 101 along Drift Creek Camp Road (Road 17). There was a good sized parking area and restrooms at the trailhead. 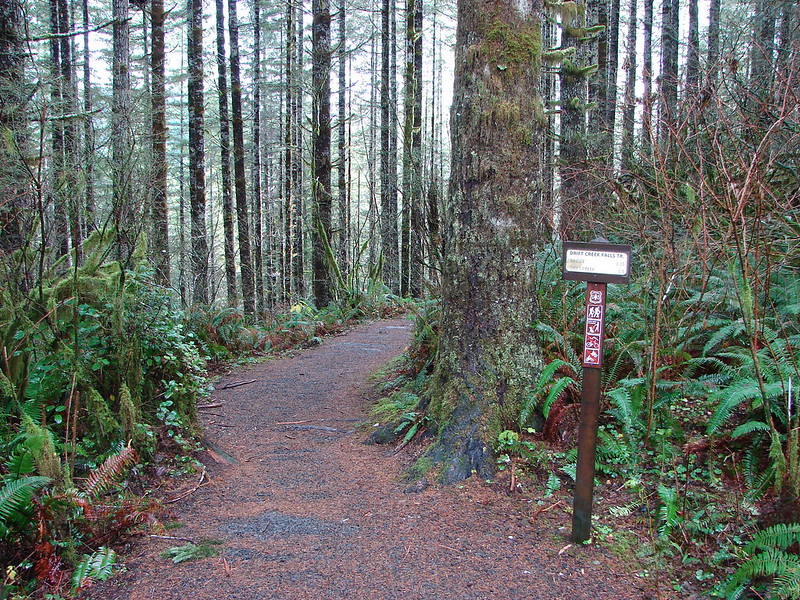 The trail leads down through the forest crossing two creeks on footbridges. 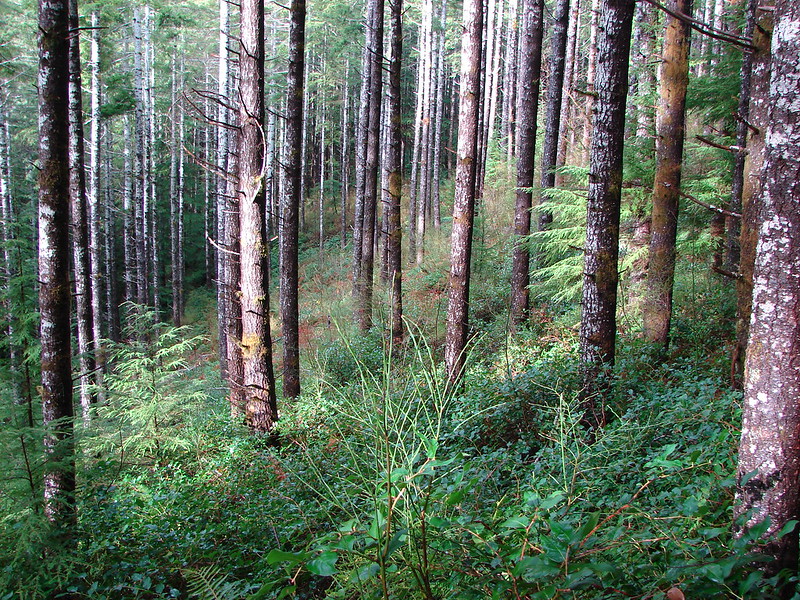 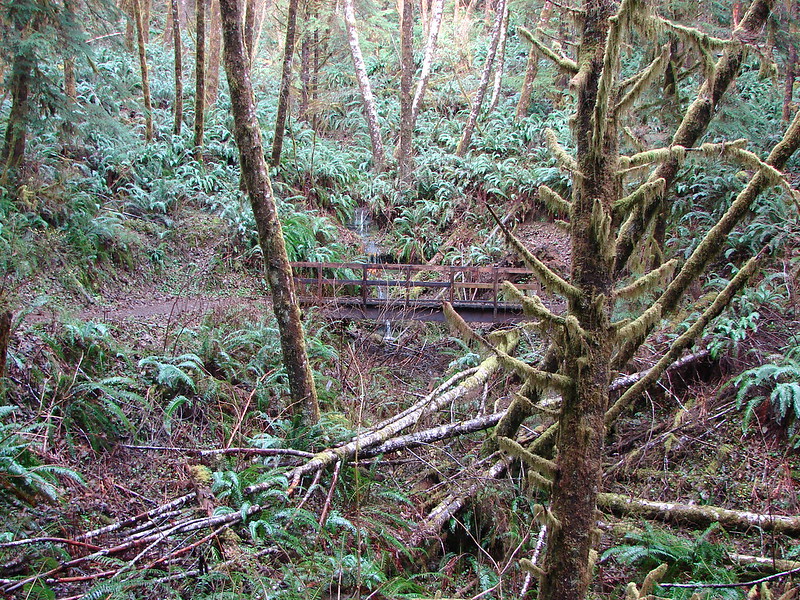 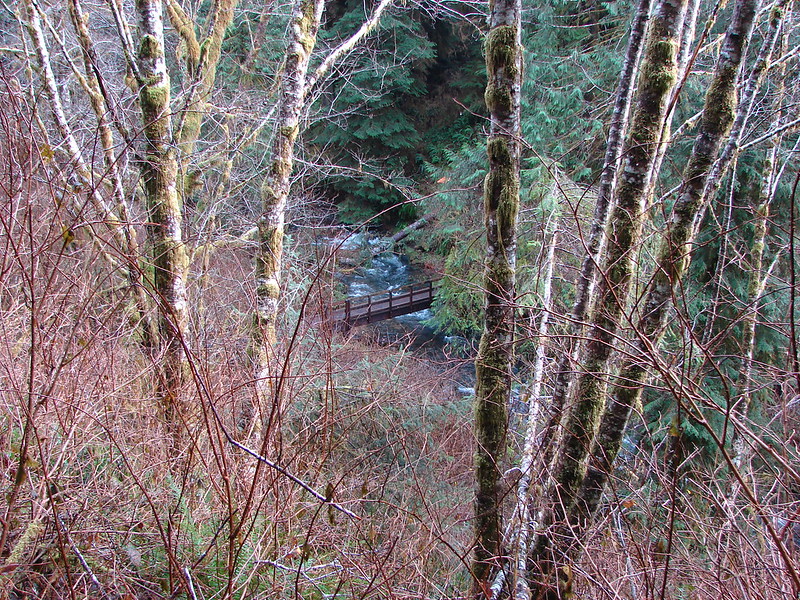 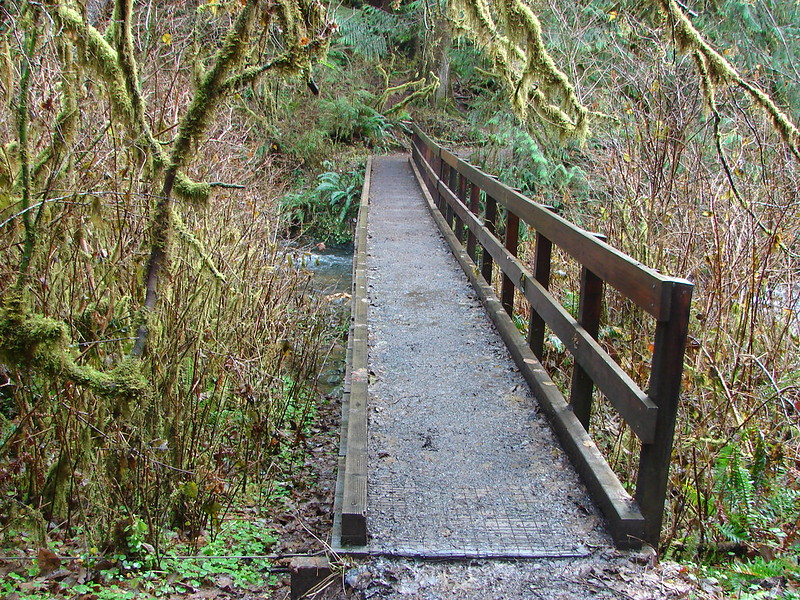 At the .7 mile mark the trail forks at a sign for the North Loop, a longer loop option which we planned to take on the way back from the falls. A third of a mile later we came to the other end of the North Loop. 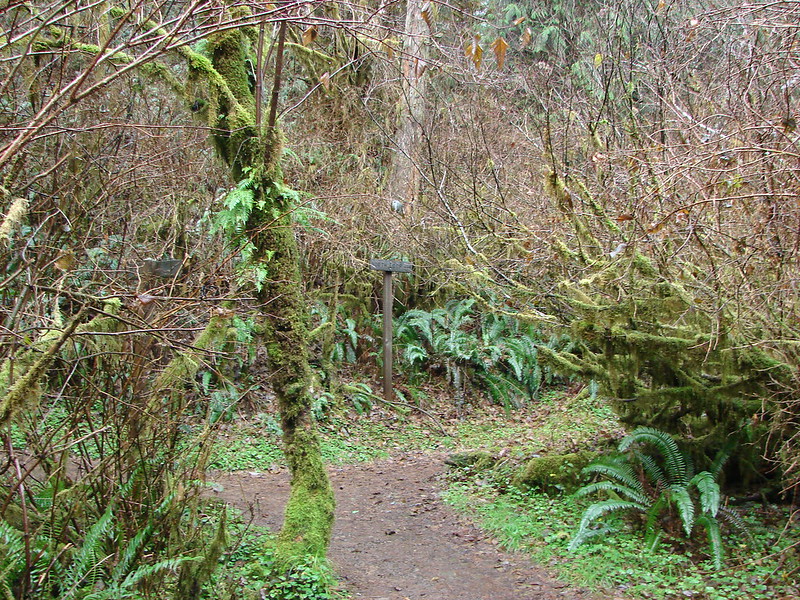 Just a short distance later we arrived at the suspension bridge over Drift Creek. 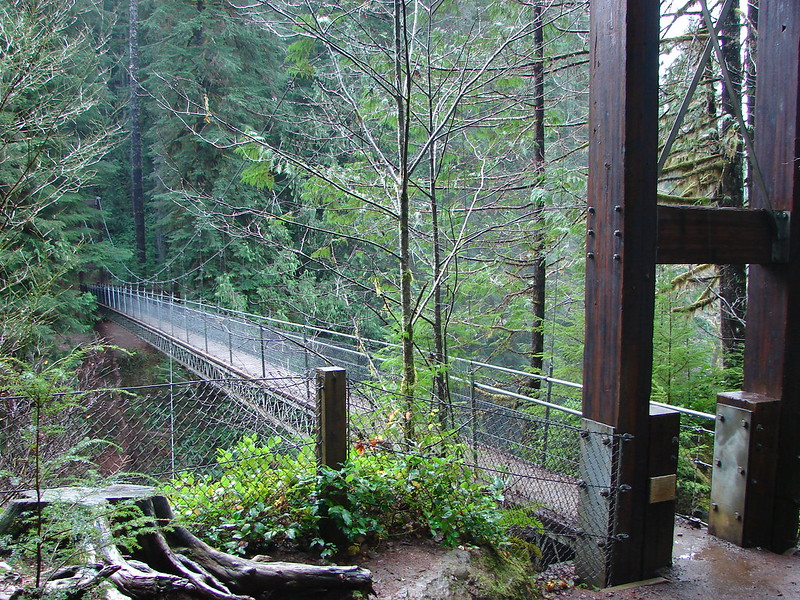 The bridge passes over the creek very close to the falls allowing for some nice views. 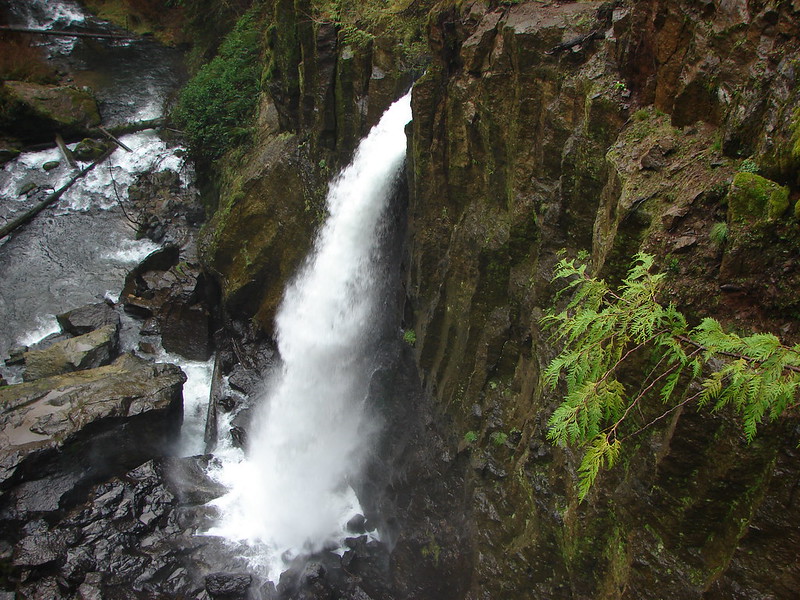 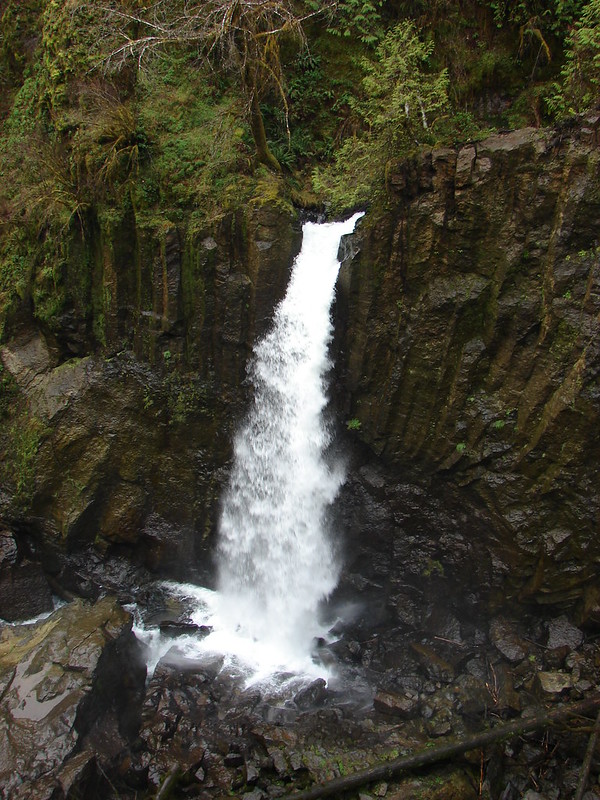 The trail continues on the far side of the bridge down to Drift Creek where we could get a different perspective. 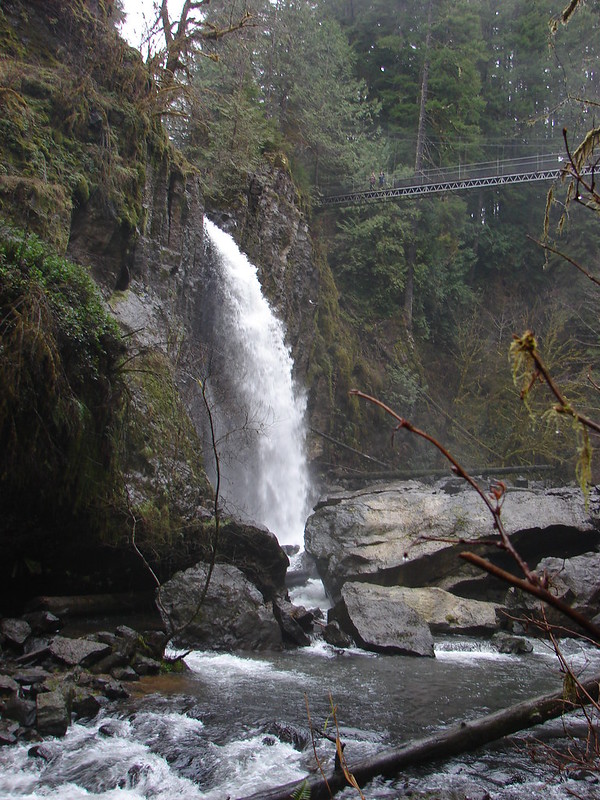 After enjoying the falls for a bit we headed back, this time taking the North Loop which would add about .7 miles to the return trip. This 1 mile section of trail climbed up and wound back through the forest. Aside from the trees and a few mushrooms there wasn’t much to see, but the trail was nice and good for a little extra exercise if wanted. 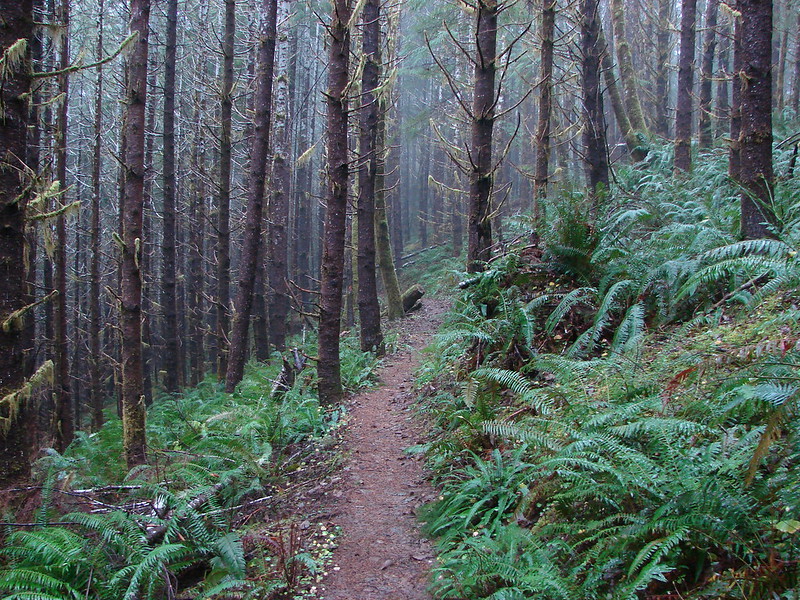 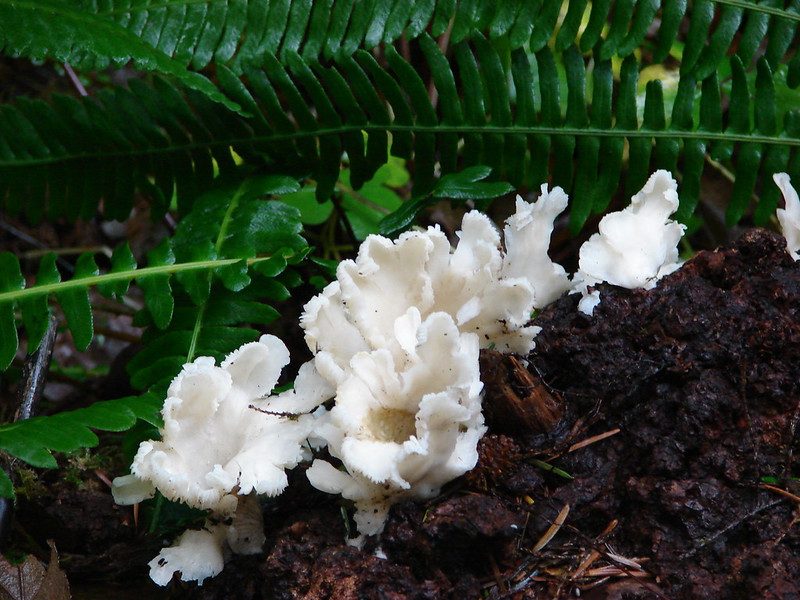 By taking the North Loop back we wound up with a total of 3.9 miles showing on the Garmin. These two trails were close enough (30 minute drive) and short enough to do in a day but they were also nice enough to stand on their own. As far as the cautions at the Harts Cove Trail we didn’t experience anything that we found too hard or scary but some of that is subjective and the trial was steep in places and the wet conditions caused a lot of mud which was slick at times. We will most likely be back to the coast sometime next month to kick off our 2015 hikes, but until then Happy Trails!