Our hike this week brought us back to what is my personal favorite destination – Jefferson Park. I can’t really say what it is about the area that makes it my favorite, but I think it is a case where the sum of the parts is greater than the whole. Jefferson Park is home to several lakes, wildflower meadows, berry patches, snow melt ponds, creeks, and the beginnings of the South Fork Breitenbush River. Oh yeah, the back drop to all of this is Mt. Jefferson, Oregon’s 2nd tallest peak at 10,497′. Our first visit came late in September 2011 when we took the Whitewater Trail and entered the park from the south. In October 2012 we took the Pacific Crest Trail from the north up Park Ridge and down into Jefferson Park. This year we would be coming from the west on the South Breitenbush Trail.

This wasn’t our first time on the South Breitenbush Trail. Earlier this year we had hiked a lower portion of the trail along the South Breitenbush Gorge. https://wanderingyuncks.wordpress.com/2013/05/12/south-breitenbush-gorge-trail/ For this hike we drove past that portion of trail to the third trail head 5 miles up road 4685. We set off from the large parking area just as the Sun was beginning to shine on the top of the ridge across the South Fork Breitenbush River’s valley. The forest was dense and quite dark as the Sun was hidden behind the ridge we were climbing. The trail climbed steadily far enough from the river to hide it’s existence. The trees also hid Mt. Jefferson as we crossed several small streams before the forest began thinning as it became drier. I noticed what appeared to be a brushy clearing that might offer a view so I started looking for a side trail. Sure enough I spotted a pair of rocks oddly placed on a small log which signaled a faint path out through the manzanita. A short distance later Mt. Jefferson came into view giving us our first good view of the mountain.

Onward and upward we trudged as the forest became sparser offering more frequent views of the mountain. We started noticing more and more ripe huckleberries as we entered the areas that got more sunlight and made sure we took a good sampling. The trail finally flattened out on a plateau where we encountered our first snow melt pond.

It seemed to belong in Jefferson Park which made us feel like we must be close which turned out to not exactly be the case. We passed through heather meadows that must have been quite a display when they were in bloom and also found some nice patches of wild blueberry bushes where the ripe berries in the sun smelled just like a freshly baked pie. We finally switchbacked down along the edge of a rock slide and followed a flower lined creek toward the South Fork Breitenbush River.

I had begun to think that we might have missed out on most of the wildflowers despite the fact we had come much earlier than in previous years. As usual I was worrying for nothing. Beginning with the creek the number of flowers began to increase and by the time we had traveled a short distance along the river we found the bank was ablaze in yellow and orange.

On the other side of the trail was a field of purple and white below the rock summit of Park Butte.

We had managed to come at a great time when many of the earlier flowers were still in bloom, but there were also later flowers such as gentians on display. To top it off the mosquitoes were no longer a nuisance.

We crossed the river and climbed a small ridge to the junction with the Pacific Crest Trail and turned north (left) toward Russell Lake. The outlet of Russell Lake is one of the sources of the river and its location between Park Butte and Mt. Jefferson makes it an ideal lunch spot. We ate our lunch (and a few more berries) while we watched a plethora of fish jumping in the lake. It seemed like there was one jumping everywhere you looked, and I even managed to get a picture of one.

After lunch we headed south along the PCT through the meadows of Jefferson Park eventually taking one of the many side trails toward the other lakes of the park. We started at Scout Lake and worked our way around the shore so we were across from Mt. Jefferson. 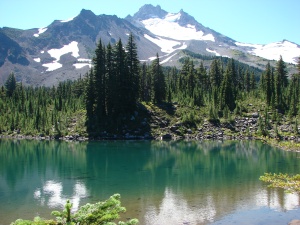 We then headed west over a small hill and down to blue Bays Lake with its rocky peninsulas.

From Bays Lake we made our way north past small Rock Lake to Park Lake and another great view.

A trail following the outlet of Park Lake led us back to the South Breitenbush Trail near the river crossing.

The wildflowers were even more impressive on the way out as the Sun was now overhead and many of the flowers such as the gentians were opening.

Butterflies had also come out to play.

After having taken all three of the main approaches to Jefferson Park my favorite would be coming in from the north on the PCT over Park Ridge. The view from the ridge is second to none, but the awful road to the trail head also has few rivals. The Whitewater trail was the easiest and offered nice views, but the entrance to Jefferson Park is not as impressive as the others. The South Breitenbush Trail was the longest (6.2miles one way compared to 5.6 & 5.1 respectively) and gained the most elevation but it offered a great variety of scenery and is the least visited of the trails. In reality you can’t go wrong by picking any of these trails as Jefferson Park is well worth the trip. Happy Trails.

[…] was our second time on this trail with our first coming in 2013 (post). We had remembered that the trail was quite rocky, but forgotten how much more of a climb it was […]