We continued what I have dubbed “Creek Week” by visiting another Eagle Creek the day after our trip to the one in the Columbia Gorge. Even though both creeks share the same name and both are located partially in the Mt. Hood National Forest the similarities end there. This Eagle Creek flows through the old growth forest of the Salmon-Huckleberry Wilderness and is much less visited than the one in the Gorge. There are no dizzying cliffs or giant waterfalls but rather the relaxing sound of running water while you stroll through a lush forest.

It was good that the trail was so relaxing because the drive to it was anything but. The hike was listed as an additional hike in the 2012 edition of William Sullivan’s 100 Hikes in Northwest Oregon & Southwest Washington complete with driving directions. He warned of a confusion of logging roads and he was right. I had also Googled the route and printed out directions from the Forest Service to the trailhead. The road names all matched but each of the directions gave different distances once we got onto SE Harvey Rd. Google said 1.2 miles, the Forest Service 1.8 miles, and Sullivan a more detailed 2.6 miles. Our first mistake was not paying attention to the difference in the distances given followed by not using the odometer as soon as we turned onto Harvey Rd. The area was heavily logged with operations ongoing so there were many side roads and turnoffs and no signs for any type of trail. We drove to the end of what we thought was Harvey Rd. and found a pile of garbage where people had obviously come out to shoot guns (seems to be a favorite pastime in that area) but no sign of a trail. We turned around and headed back the way we’d come looking for any sign of a trail that we might have missed. There were a couple of possibilities but nothing obvious. As we were reading the different instructions we noticed the different mileages which made it more confusing. In the end we decided to drive back to the start of SE Harvey Rd. and use the Odometer. There was nothing at the 1.2 mile mark so the Google instructions were ruled out. At the 1.8 mile mark a gated road led down to the right. The trail description in the book stated that the trail began on an overgrown old road so this had possibilities. I got an idea here and turned on the GPS to see if we were at the trail but when the map came up there was no trail where we were so we hopped in the car and continued to follow Sullivan’s mileage directions. We stopped at one point when we spotted what looked like it might have been an old road with a possible trail leading from it but again using the GPS it was clear that we still had not found the trail. At the 2.4 mile mark we spotted a barricaded road leading down to the right so again we stopped to check it out. This time the GPS showed us on a direct line for the trail and a small path led between the snags blocking the road. There were no signs but this was it. 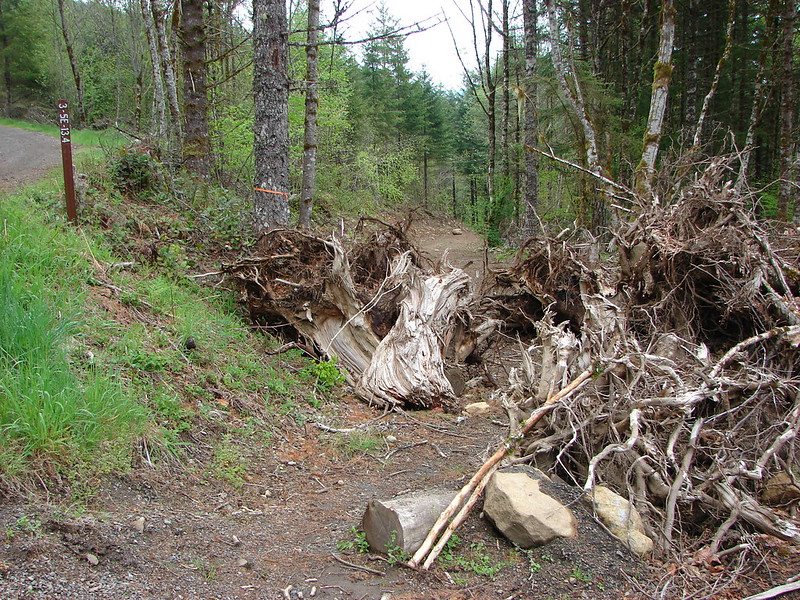 What we believe happened was the Forest Service stared counting mileage about half a mile after Sullivan started. Then the final approximate quarter mile of Sullivan’s directions had been since blocked by the logging operation because after a brief walk on the road we came to a second small barrier behind which we found an overgrown road such as he had described. 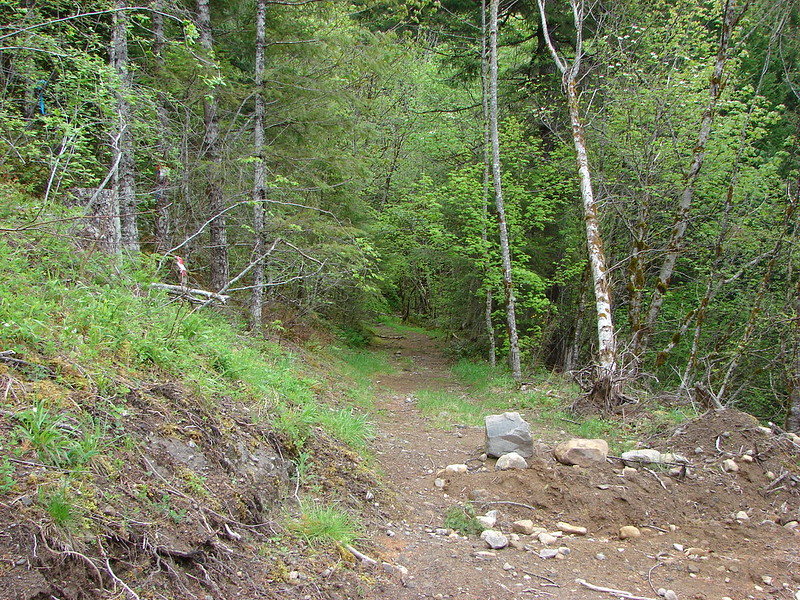 In any event according to the GPS we had found the trail and were on our way down to Eagle Creek. We finally found a sign to confirm what the GPS was telling us. Near the end of the overgrown road there was some flagging and a sign announcing the beginning of the Salmon-Huckleberry Wilderness. 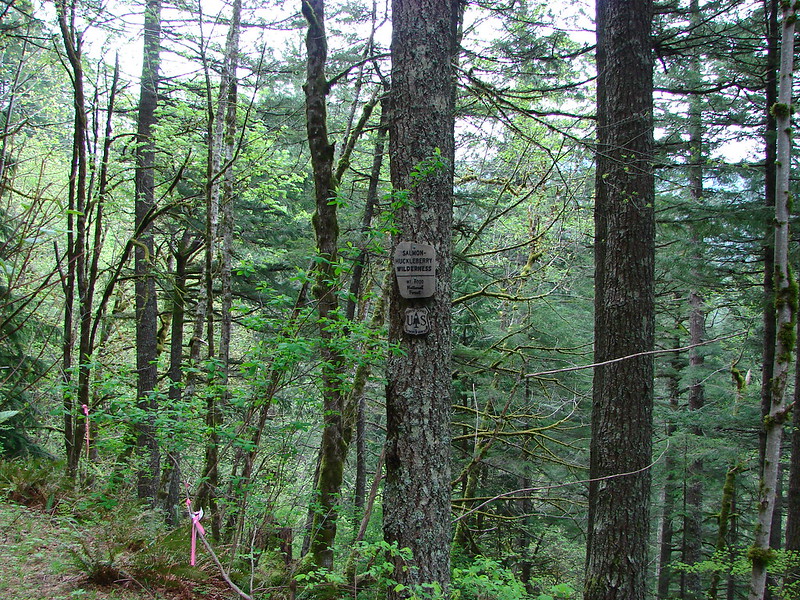 After entering the wilderness the trail looked less and less like an old road until it finally became a full on trail. 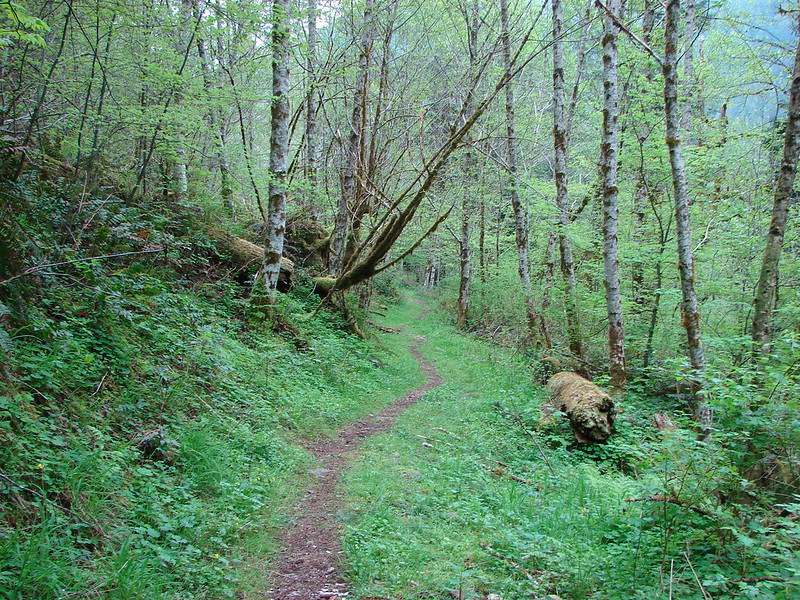 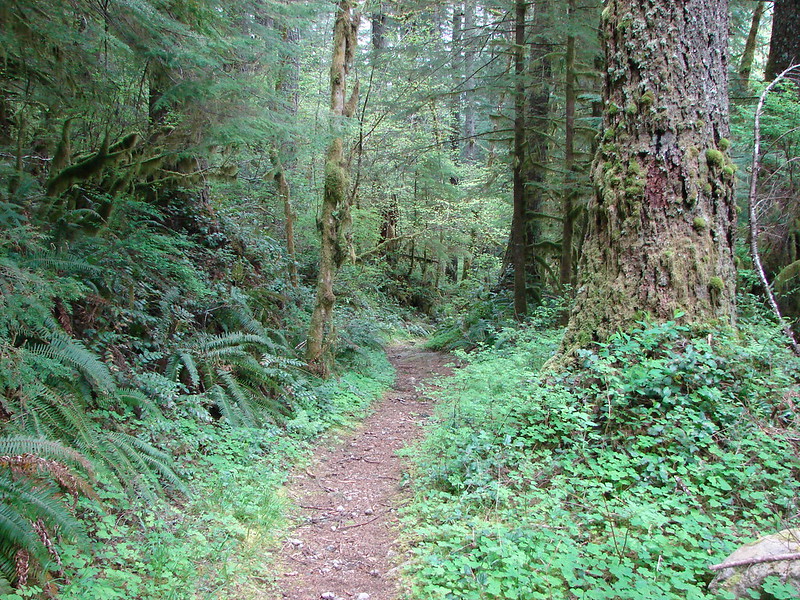 We ran across some interesting trees/trunks on the early portion of the trail. One of our favorites was a tree growing on top of an old trunk. You could see the new trees root system running down the length of the old trunk. 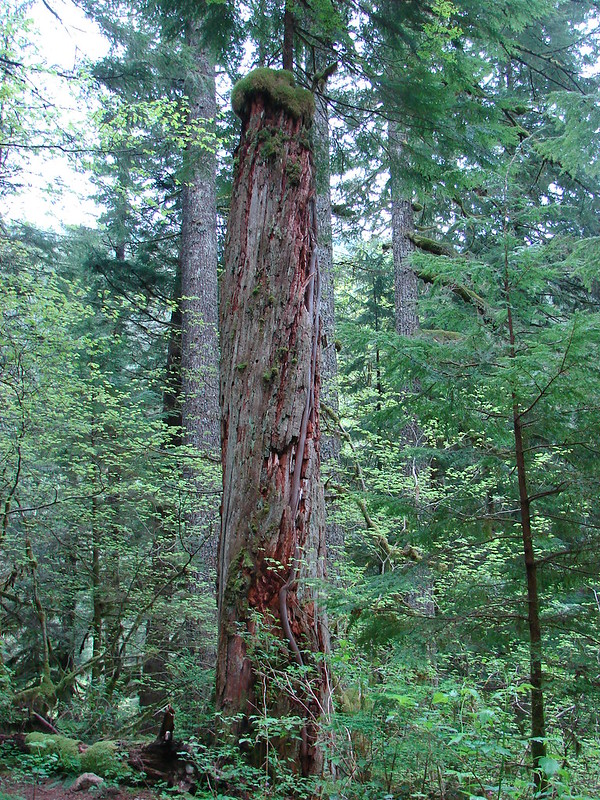 Another old trunk had a stream flowing out from under it. 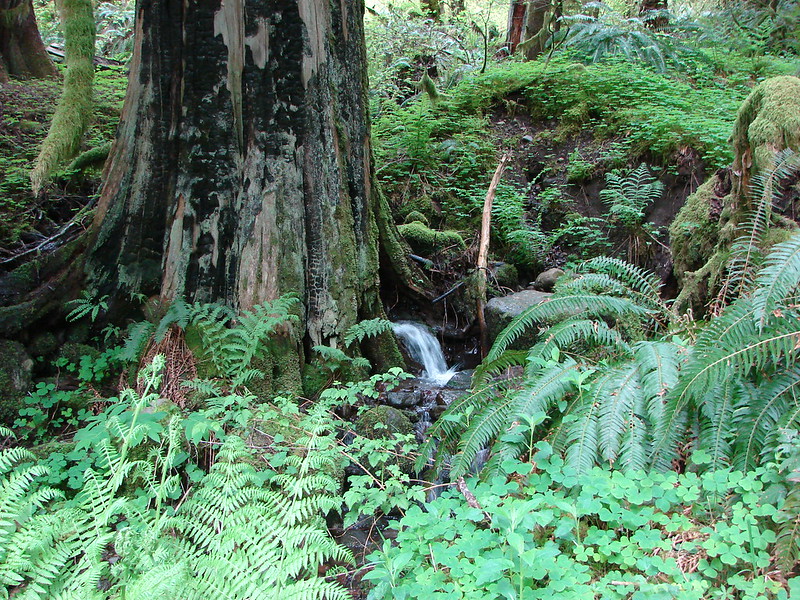 There were many streams and creek to cross along the trail, but only one bridge. 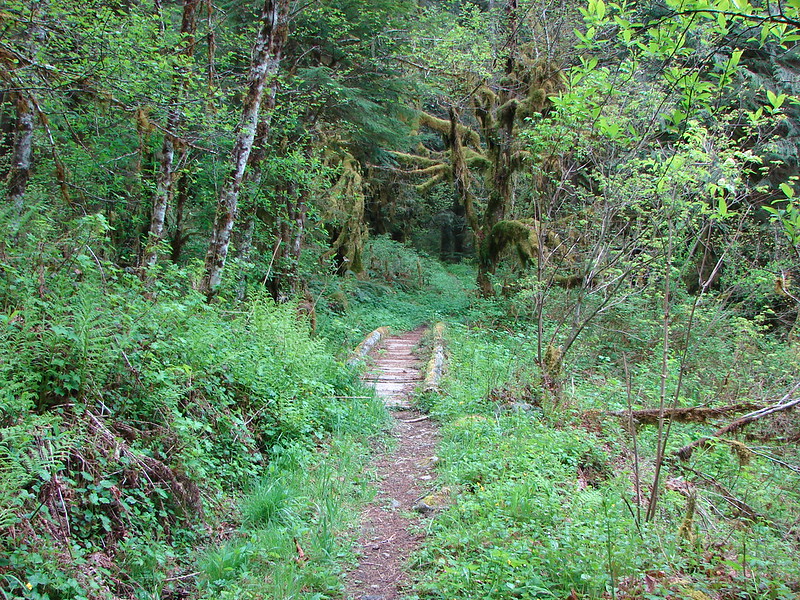 There was no way we were going to keep our feet dry on some the crossing but that was okay with us, the streams just added to the beauty of the forest. 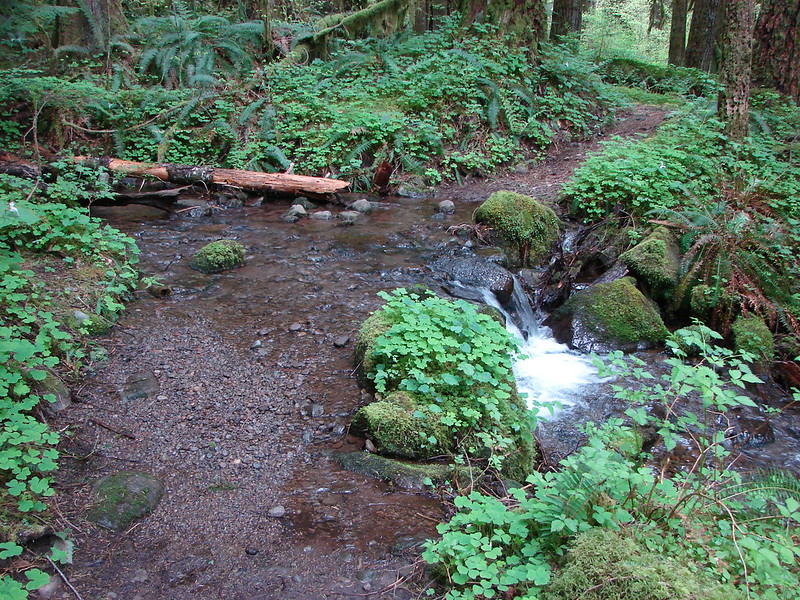 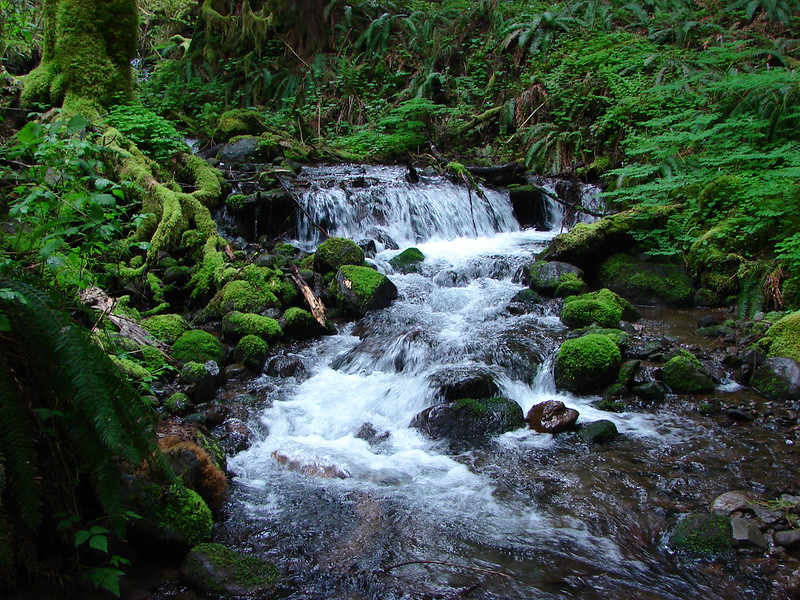 Due to the dense forest there weren’t a large variety of wildflowers but there were some including bleeding heart, wood violets, lots of trillium, and a new one to us scouler’s corydalis.
Bleeding Heart 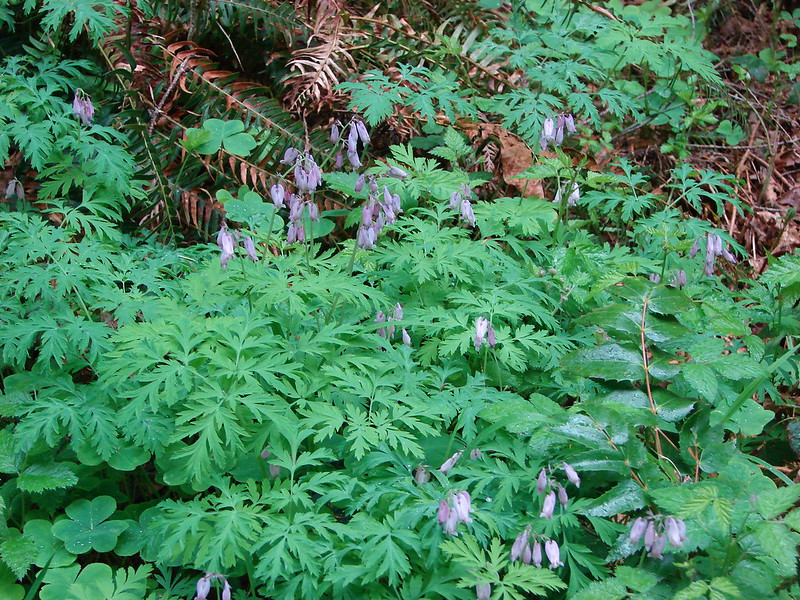 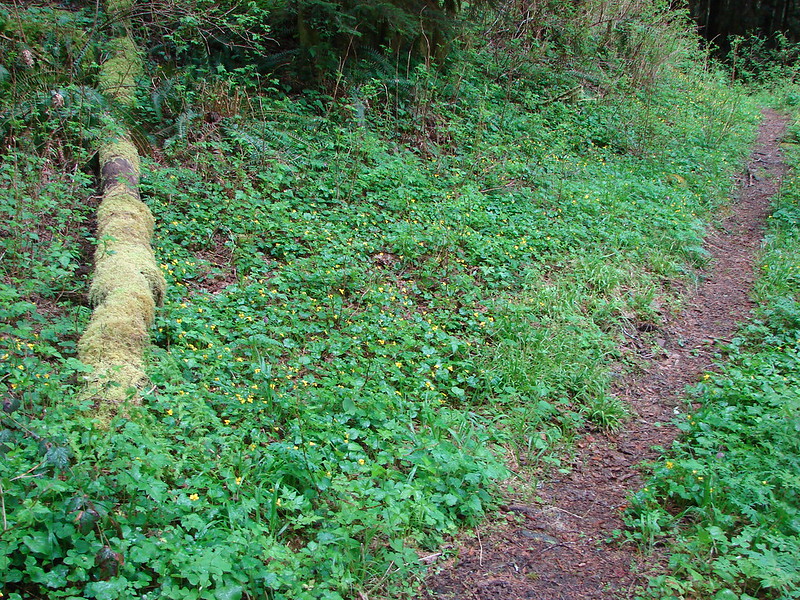 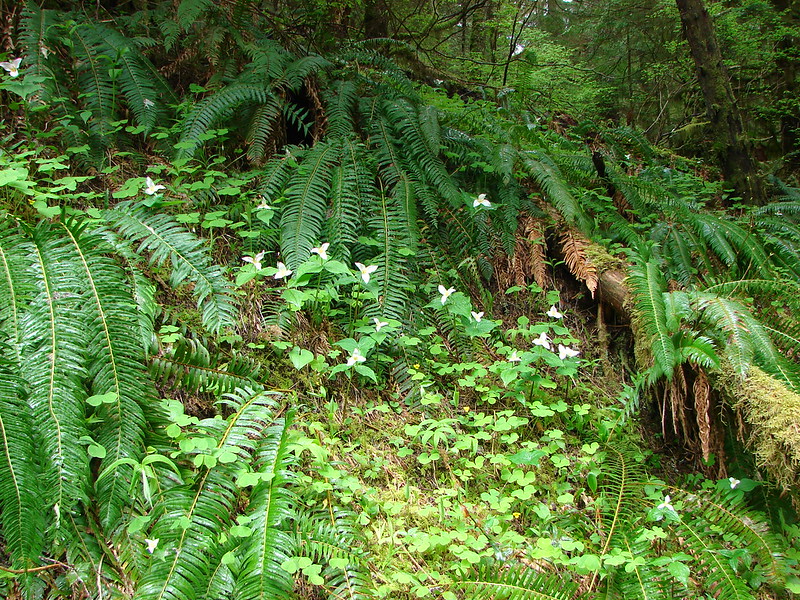 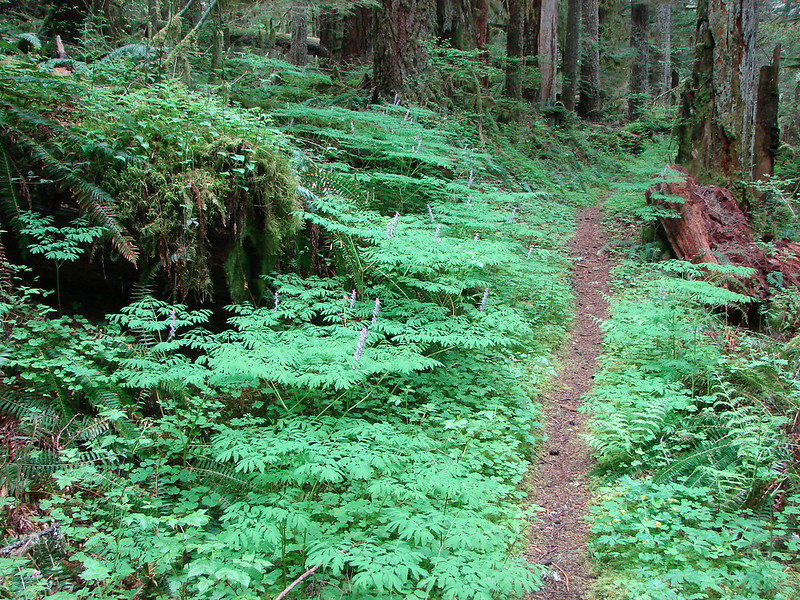 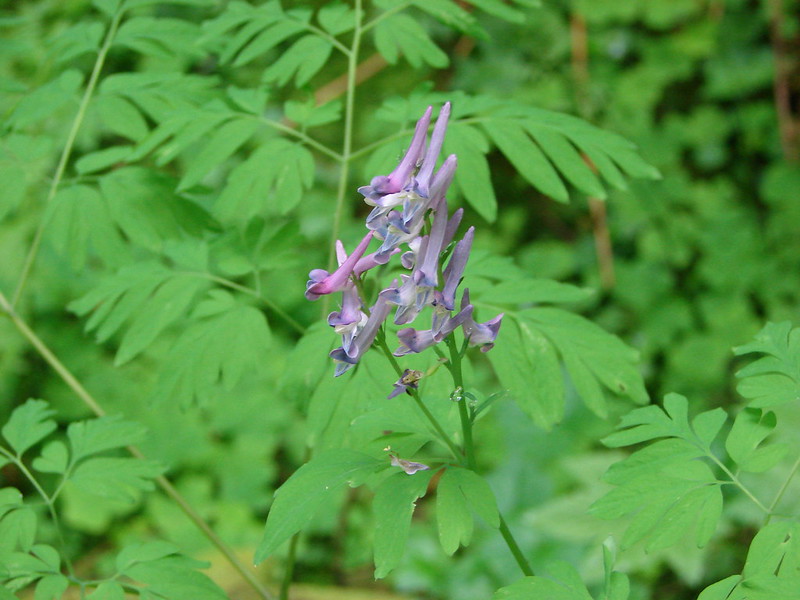 Open areas where were filled with salmon berry bushes. 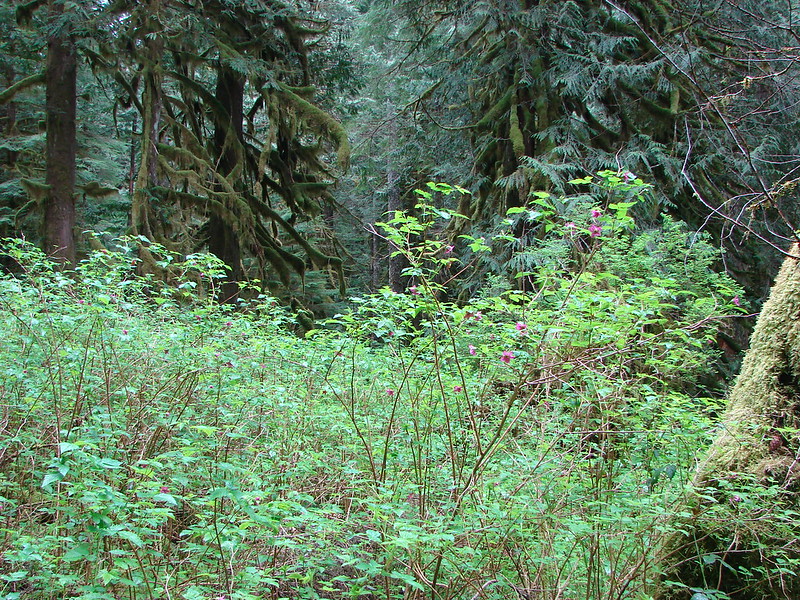 We were up above Eagle Creek at times and then we would be walking next to the water for a bit. It was a decent sized creek lined with lush forests. 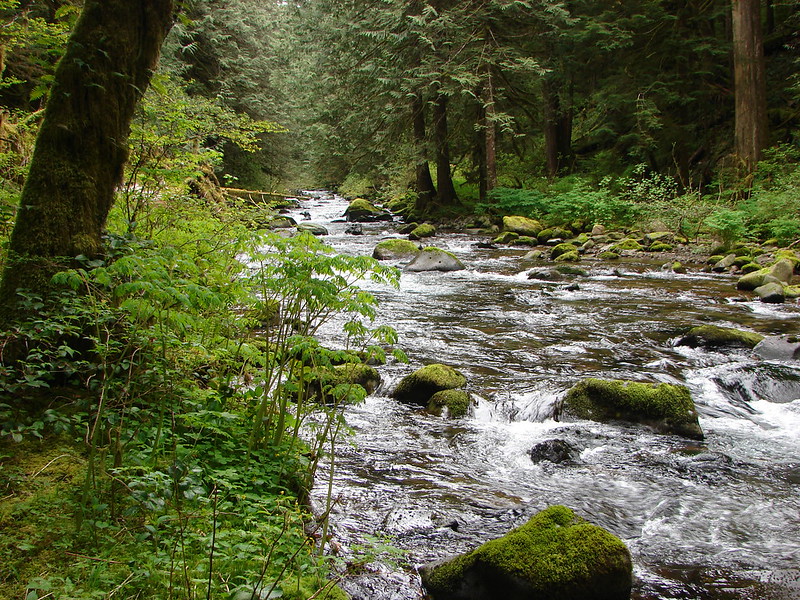 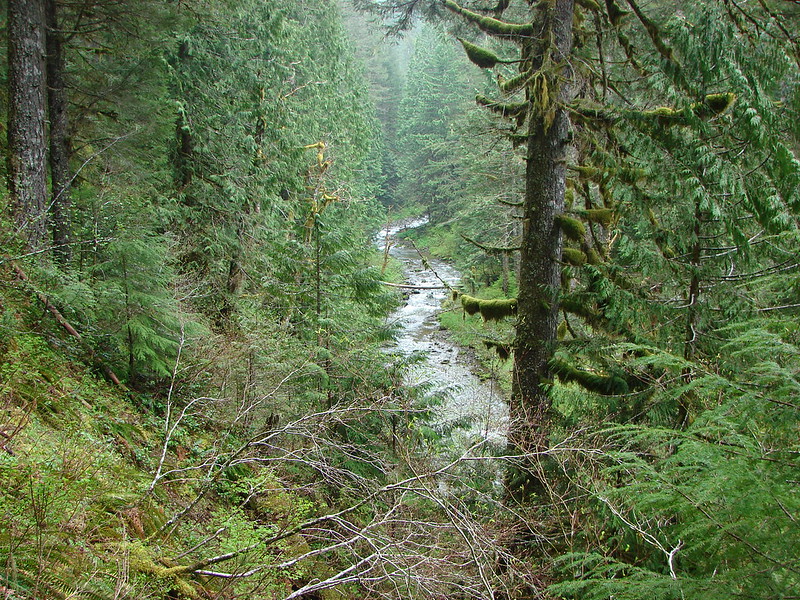 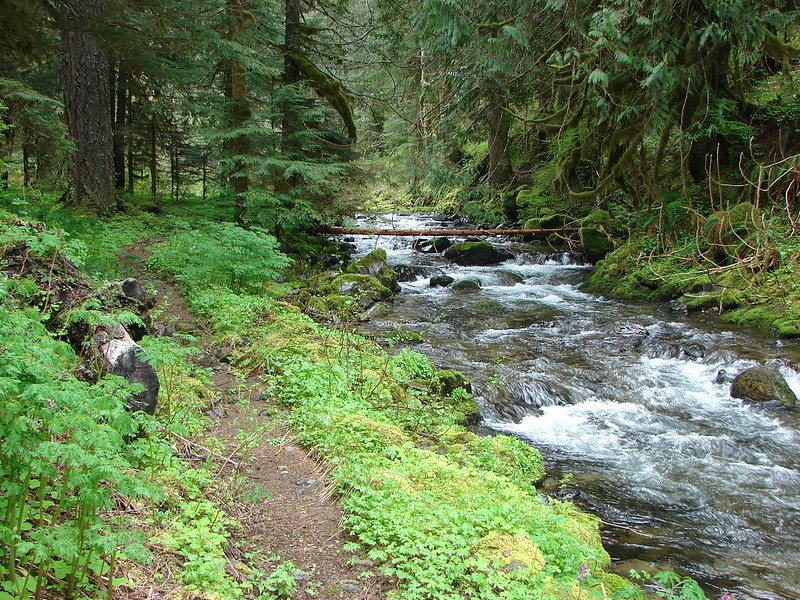 We didn’t see a lot of wildlife on this hike but I think that was partially due to the lushness of the forest. At one point we startled a deer that was in the creek but all I saw was splashing then a brown and white flash as it ran into the trees. What we did see was an Ouzel, an interesting spider, a couple of newts, and one of our favorite little song birds that I believe is a Pacific Wren. 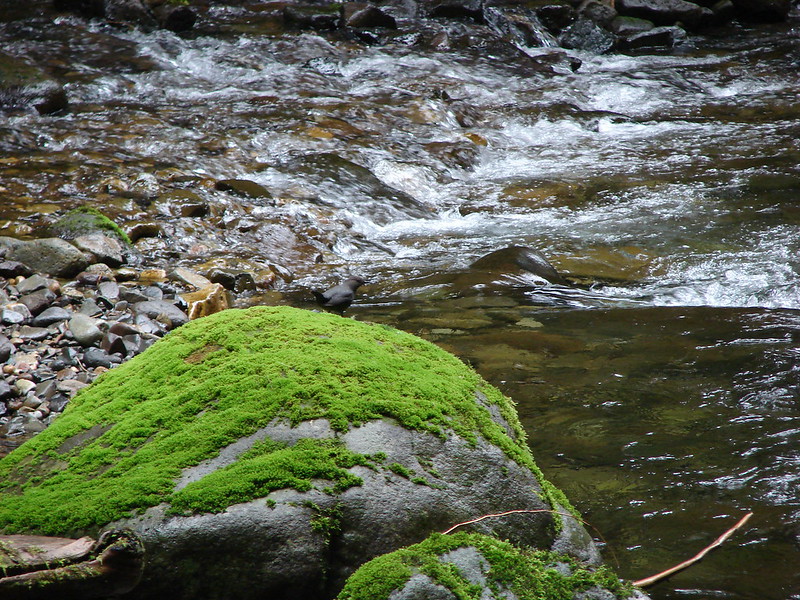 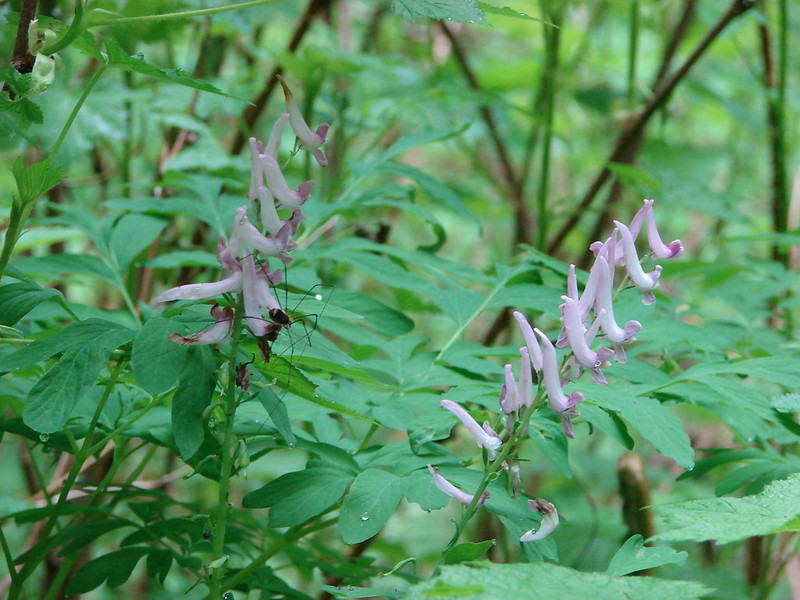 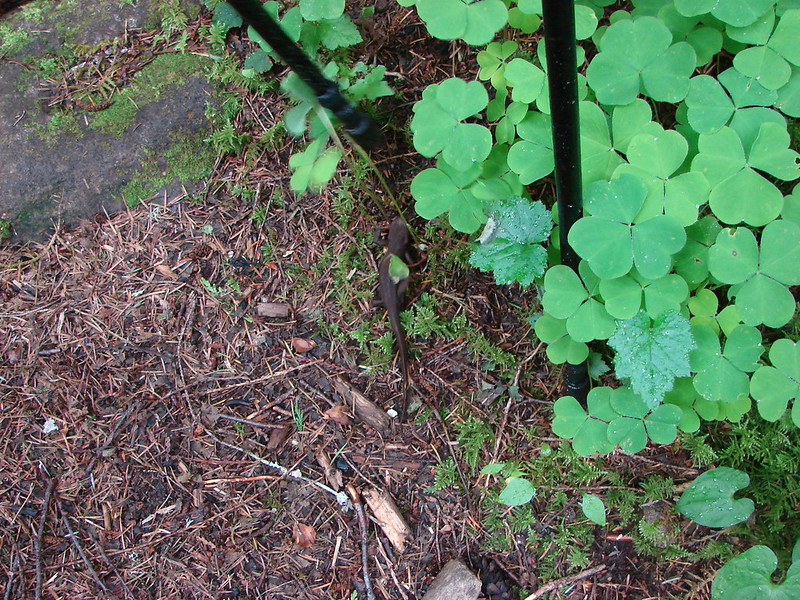 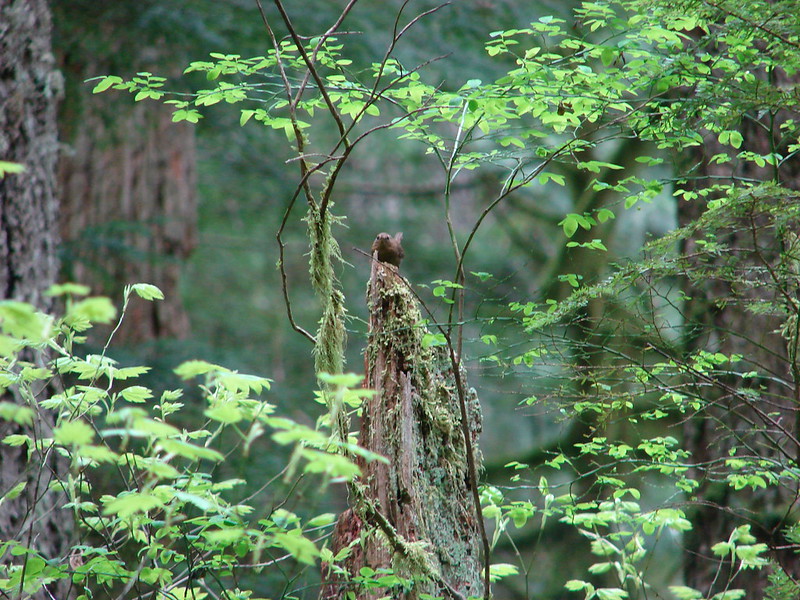 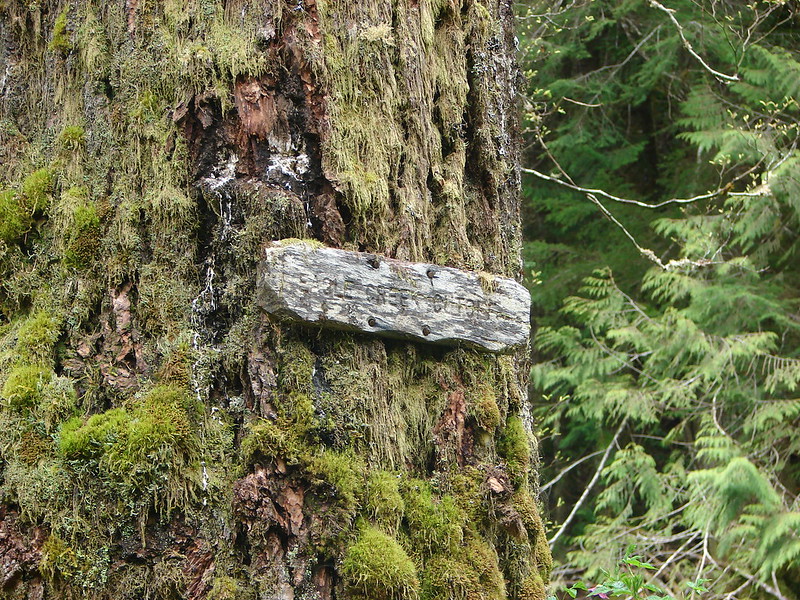 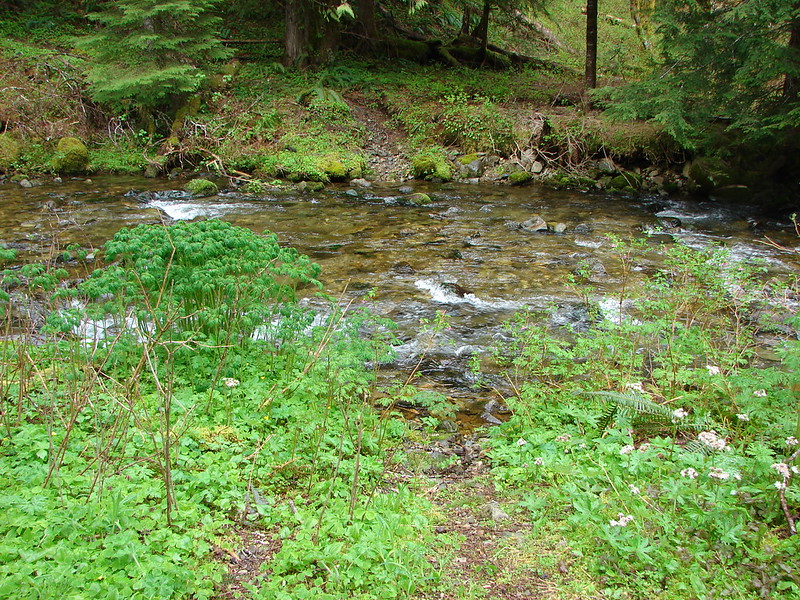 We had a little drizzle from time to time up to this point but as we began our return trip the drizzle turned to a light rain. We made quick work of our return slowing only due to the climb back up the old road. It had been a great hike for relaxing end to our creek streak with. Next up we’re going to attempt to get a view, but in the Pacific Northwest Spring views can be tricky. Until then Happy Trails!

2 replies on “The Other Eagle Creek (Salmon-Huckleberry Wilderness)”

[…] After catching our breath at the summit we headed back the 3.8 miles to the trailhead, stopping again at the viewpoint to note the creeping clouds as they moved east over the Eagle Creek Valley (post). […]