Hike #2 on our mini-vacation was a visit to the Rogue River-Siskiyou National Forest and Crater Lake National Park. The plan was to start at the Mazama Viewpoint on Hwy 230 and first visit Boundary Springs which is where the Rogue River begins. Then we would hike down the Rogue River to Rough Rider Falls. We would have turned around there but my parents decided to come along and start at a different trail head and hike up the Rogue to the falls. They dropped us off at the Mazama Viewpoint before heading down to the lower trail head. This allowed us to continue past Rough Rider Falls and meet them at that spot.

It was a cloudy morning and we’d driven through a little rain/snow mix on the way there. An occasional light rain would continue all day long with a glimpse of blue sky thrown in every now and then. We started off on the Upper Rogue River Trail from the Mazama Viewpoint and followed the trail half a mile to a junction with the Boundary Springs Trail. Shortly after joining this trail we started getting glimpses of the Rogue flowing through the forest.

We crossed the boundary of Crater Lake National Park and continued on toward the springs. The river was increasingly scenic as we went. 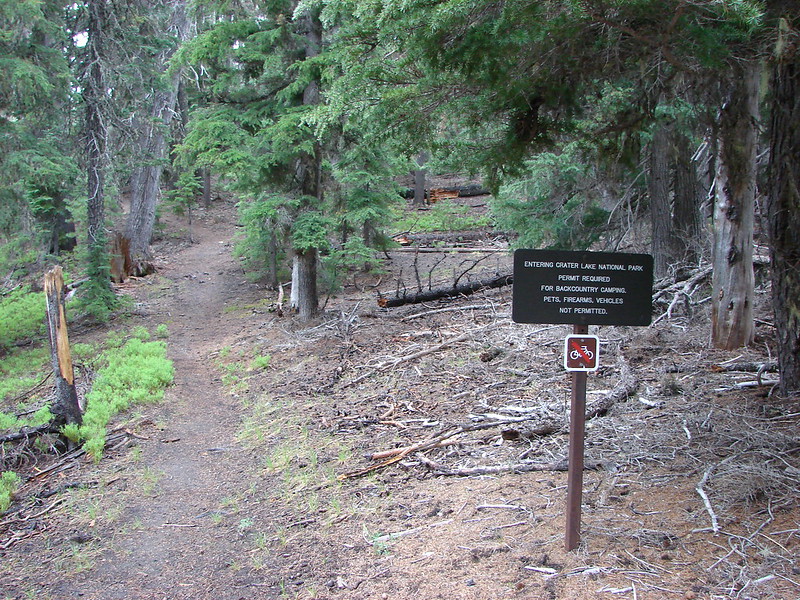 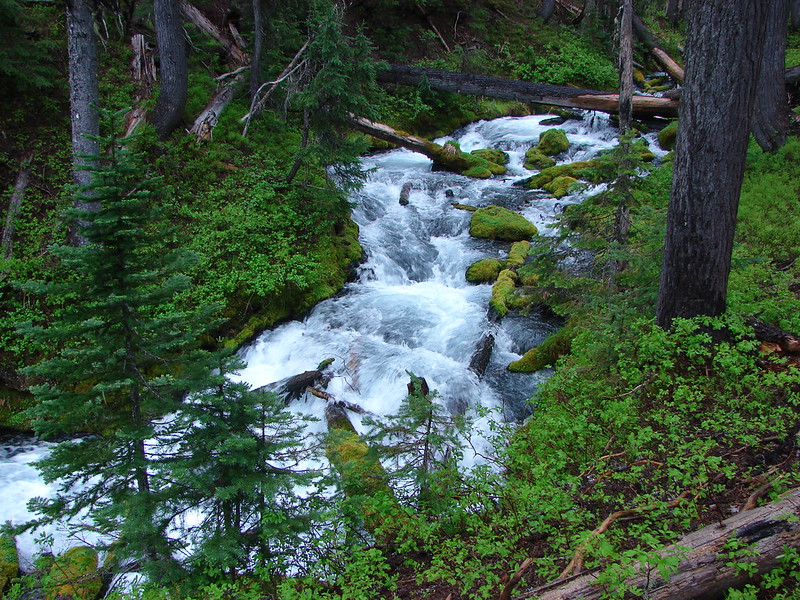 Near Boundary Springs was a pretty waterfall: 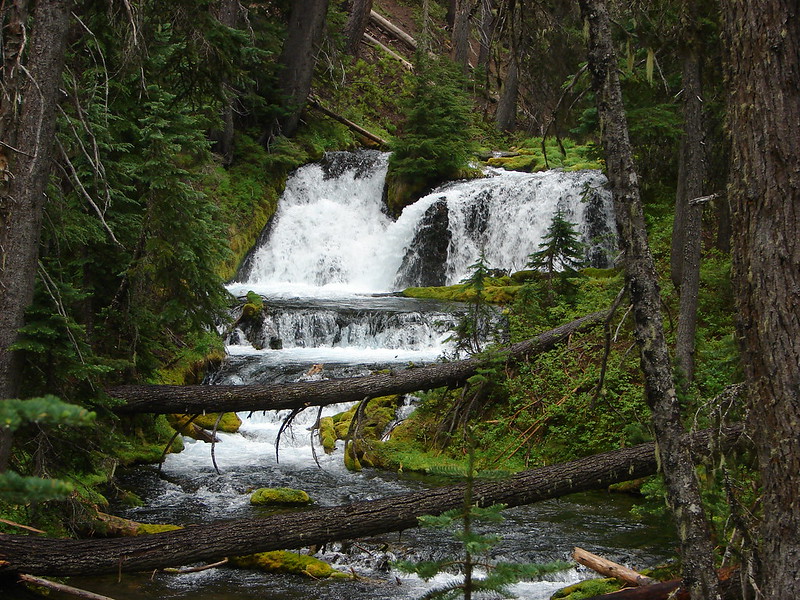 The river just below the springs: 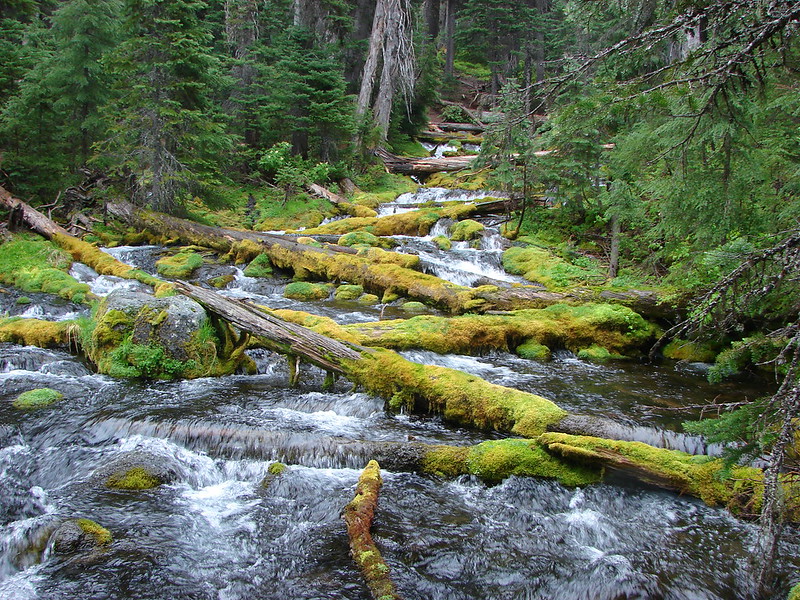 The largest of the springs: 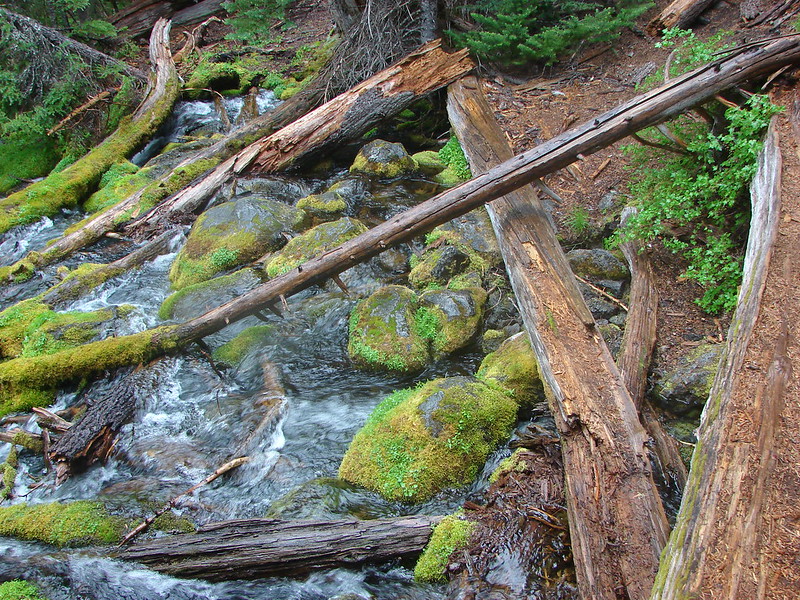 After poking around the springs we returned to the Upper Rogue River Trail and turned left to head down river to Rough Rider Falls. The trail started out far above the Rogue as it flowed through an interesting canyon. 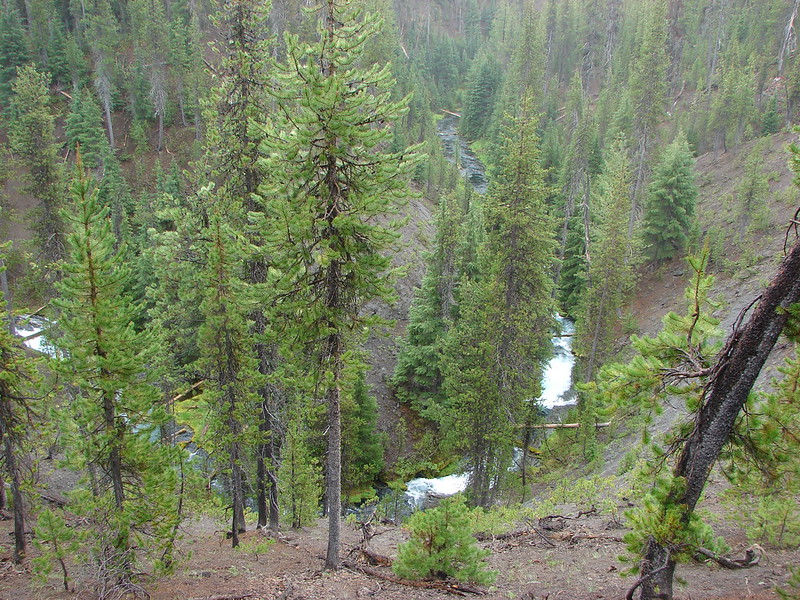 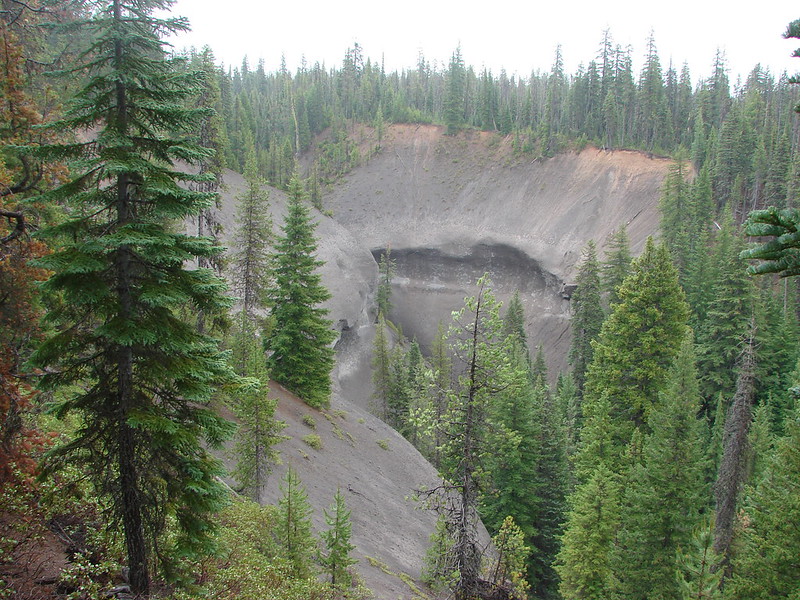 We came upon a couple of deer that were too quick for pictures and a pair of noisy woodpeckers that didn’t seem too pleased with one another. 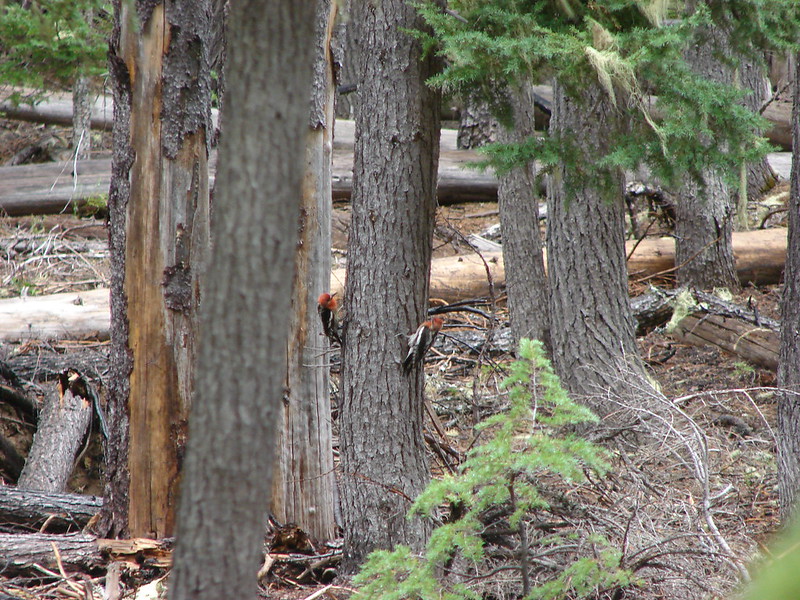 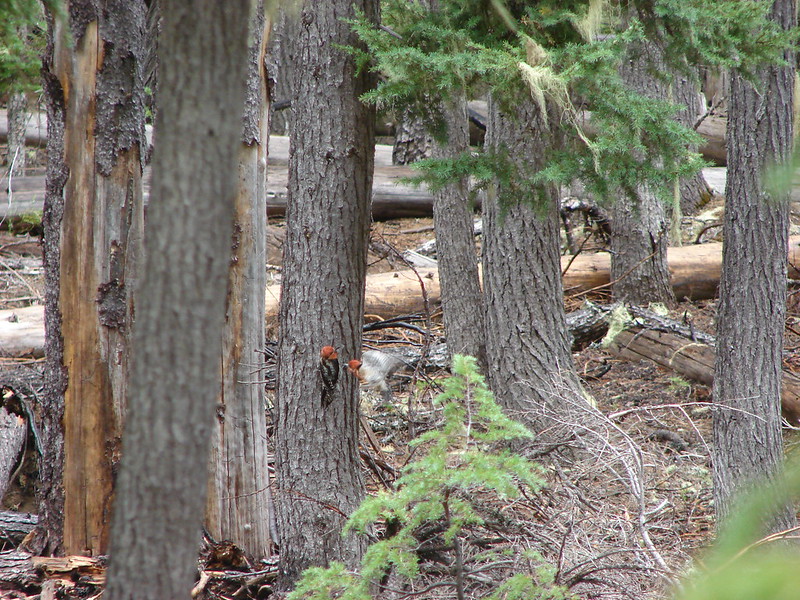 We also saw the best candysticks we’d come across: 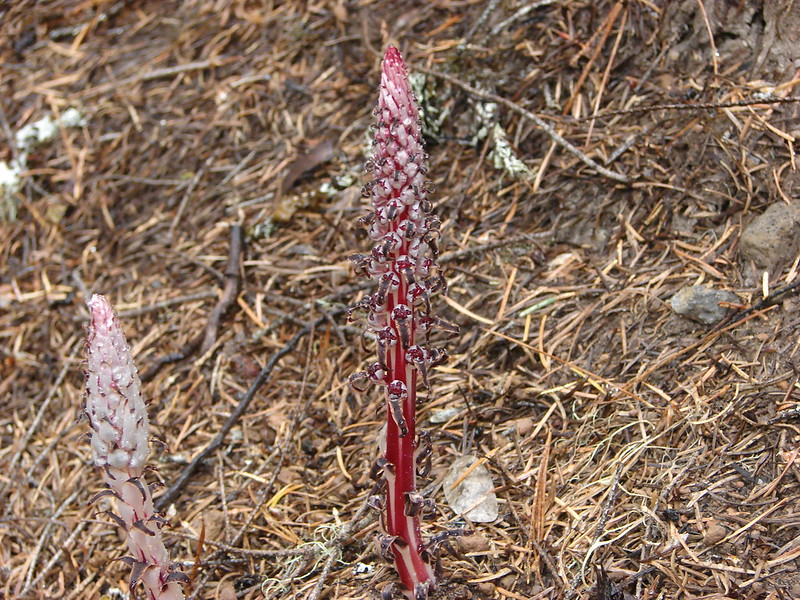 And a strange mushroom thing: 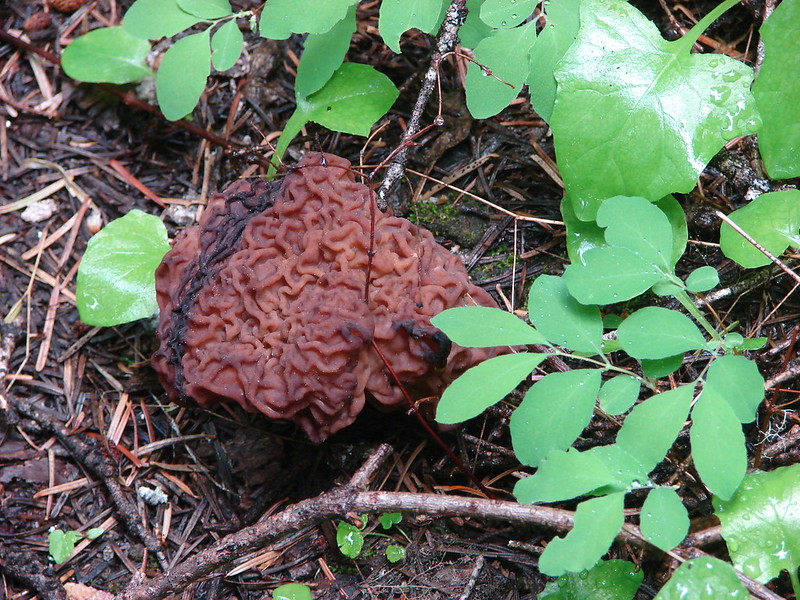 The trail descended back down to the river which was amazingly clear where the water was calm. 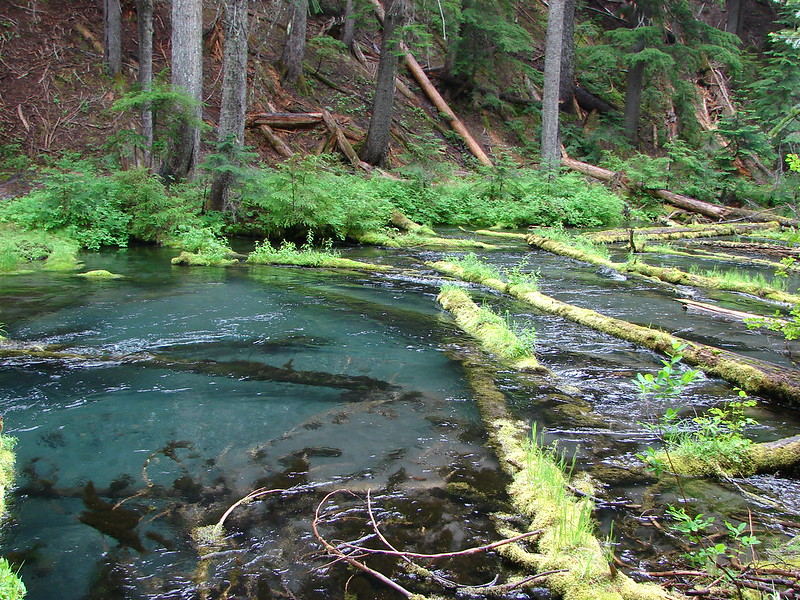 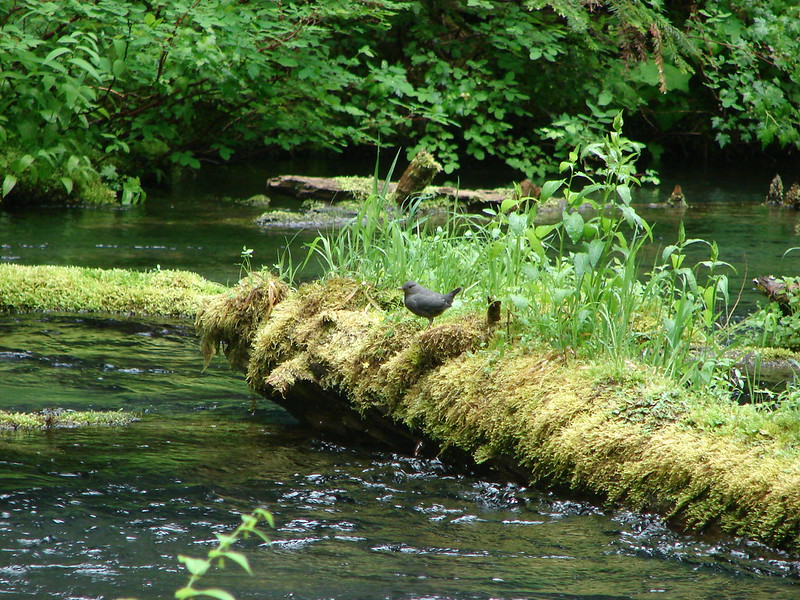 Once the trail lowered into the canyon it became a bit messy. Many downed trees created tricky obstacles and the trail was in need of some maintenance. 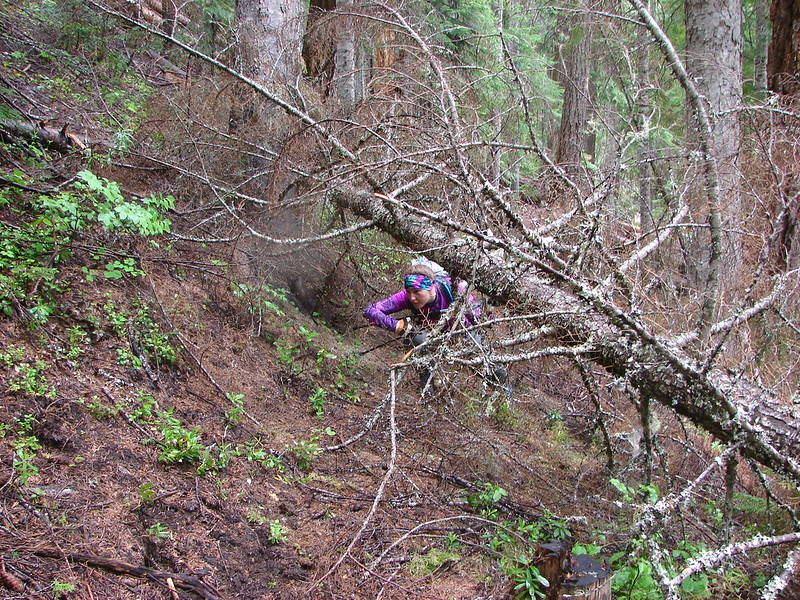 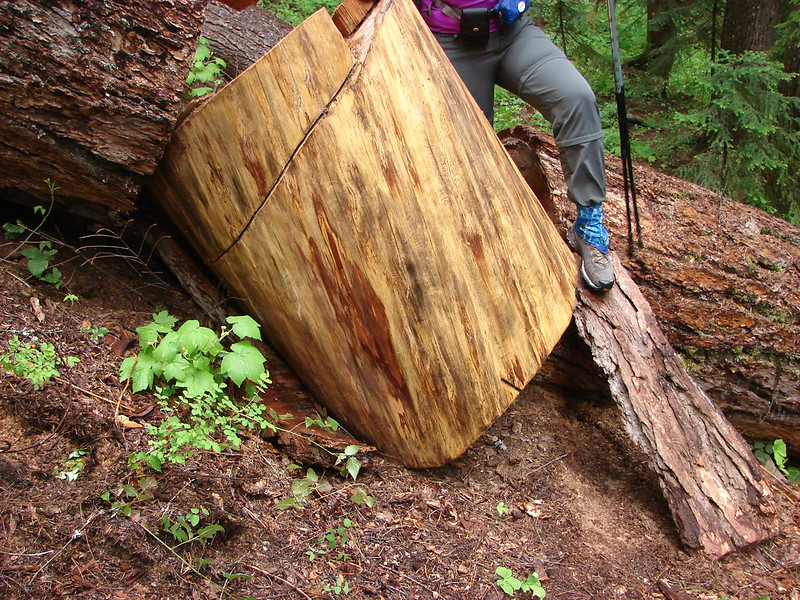 It was 4.2 miles from the Boundary Springs Trail to Rough Rider Falls. A sign above the falls announced them. 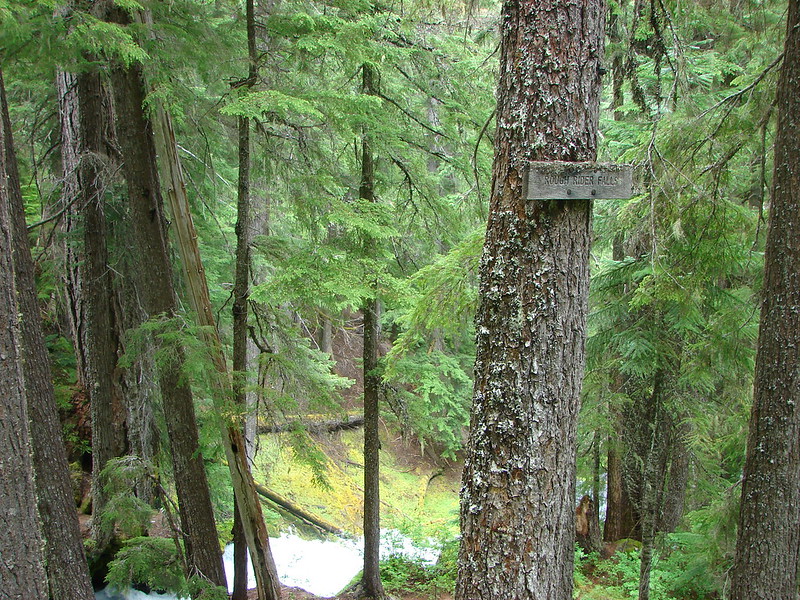 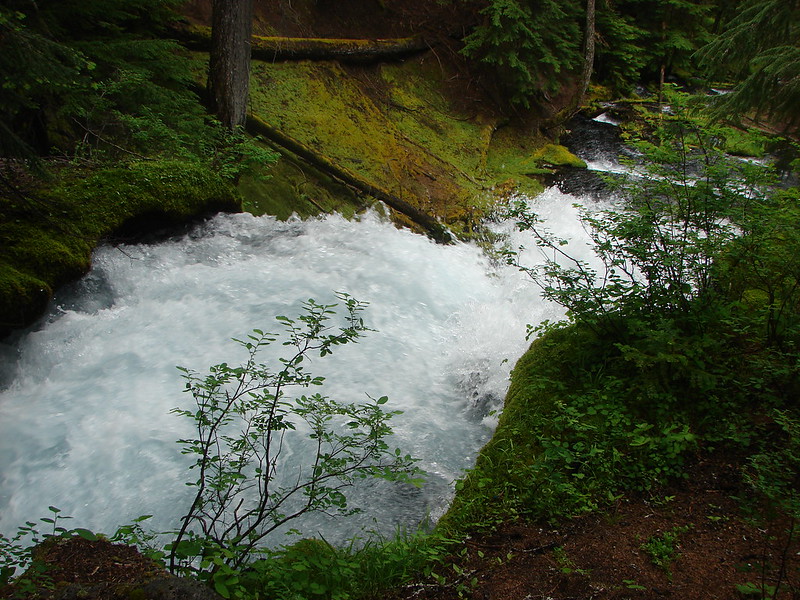 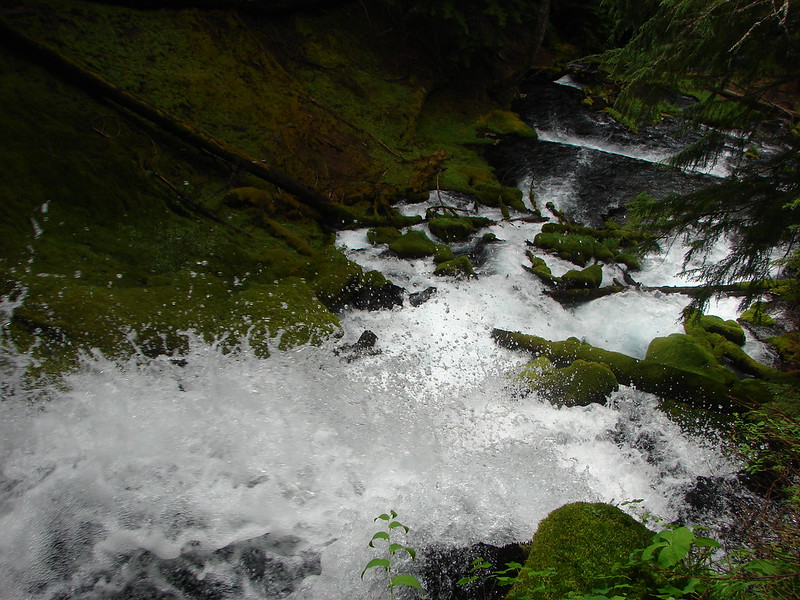 It was pretty above the falls but we couldn’t get a good feel for them until we descended below them. 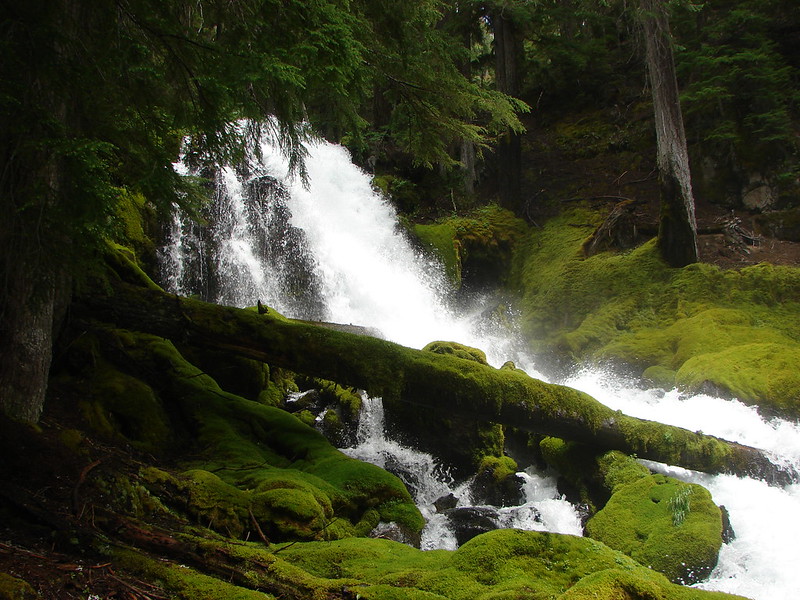 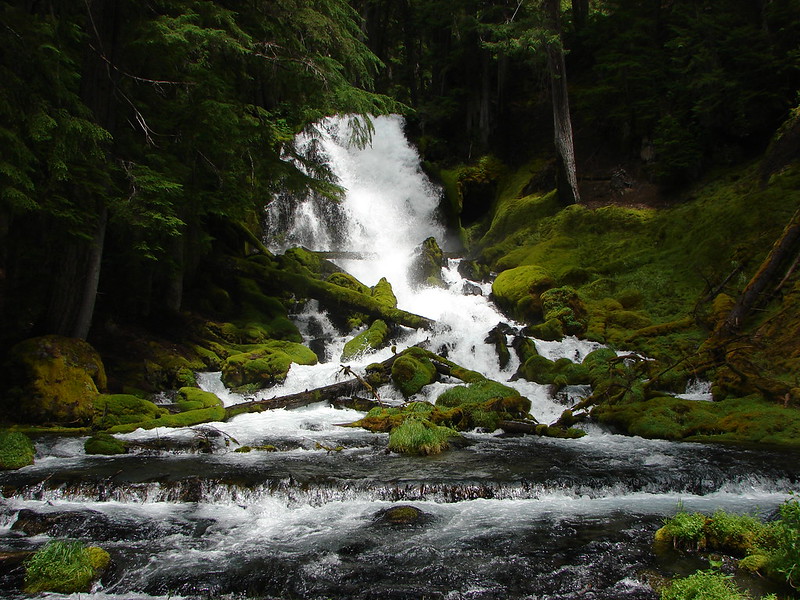 After Rough Rider Falls we passed a pretty little waterfall coming from a hillside into the river. 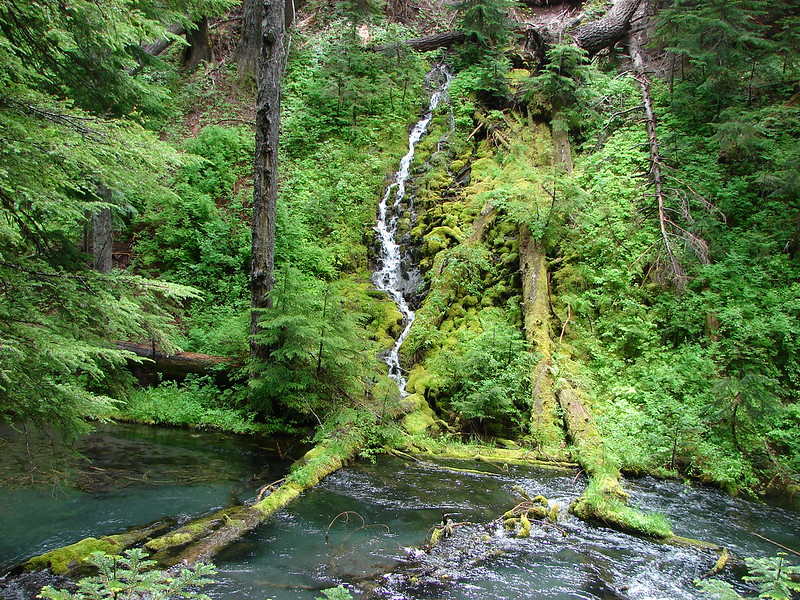 A little island with whitewater on each side: 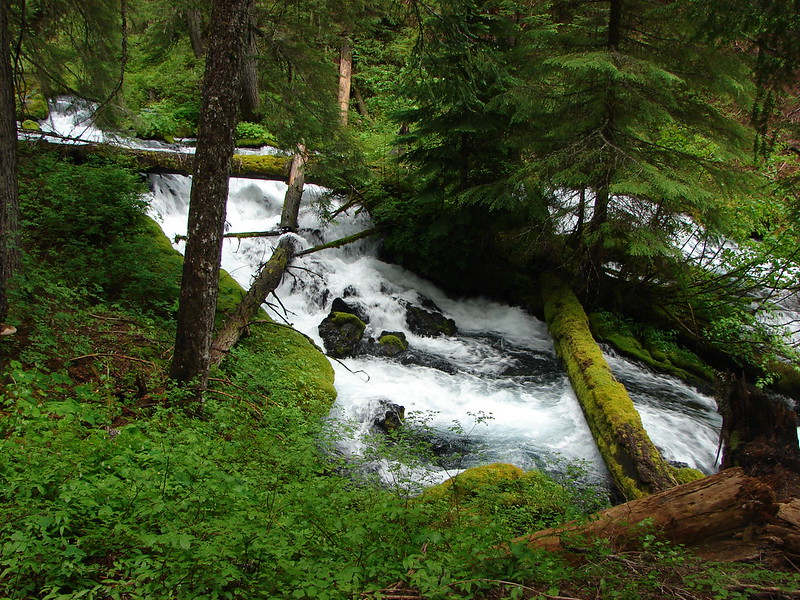 And finally an unnamed waterfall: 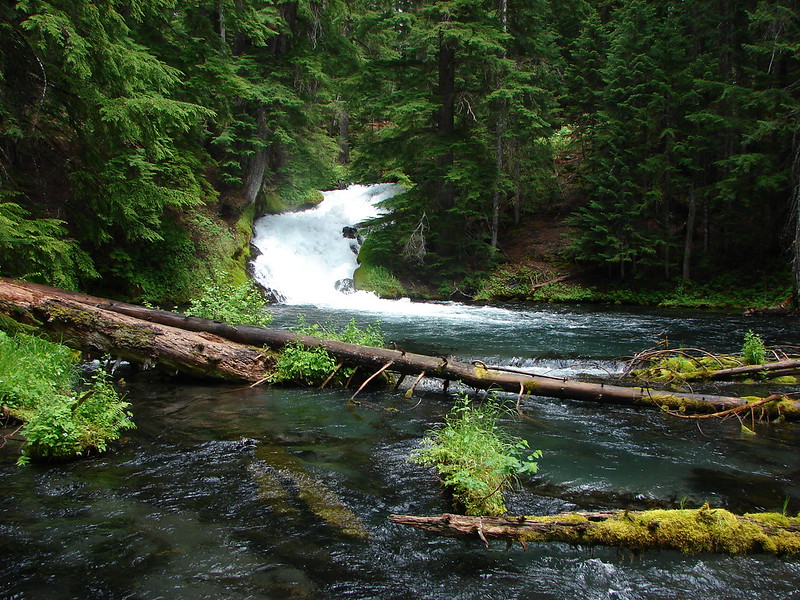 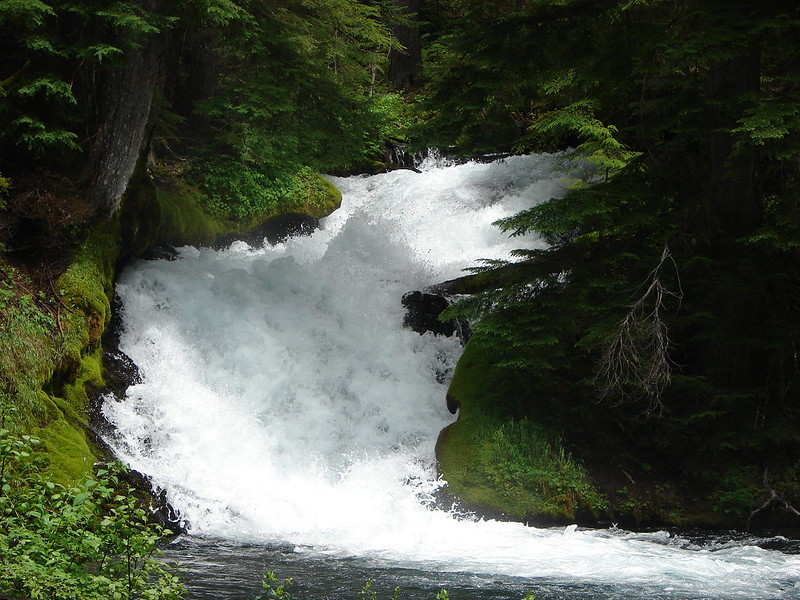 The strangest thing of the hike was the amount of climbing we felt like we did considering we were supposedly traveling downhill with the river. When we arrived at my parents car we discovered that they had just finished about 15 minutes earlier. There were some mosquitoes around the car so we quickly tossed our gear in the back and hopped in. We had hopped to stop by Crater Lake on the way home since Dominique has never seen it and it had been years since my parents had. We were there in 2012 but smoke from a fire had obscured most the views. With the weather flipping between blue sky and rain showers all day we weren’t sure if we would be able to see the lake but my parents had their National Park Pass with them so we decided why not give it a try. As we drove up to the north rim we entered the clouds and some more rain/snow mix. The visibility was worse than our previous visit so I took a couple of pictures to show we were then we turned around and headed home. 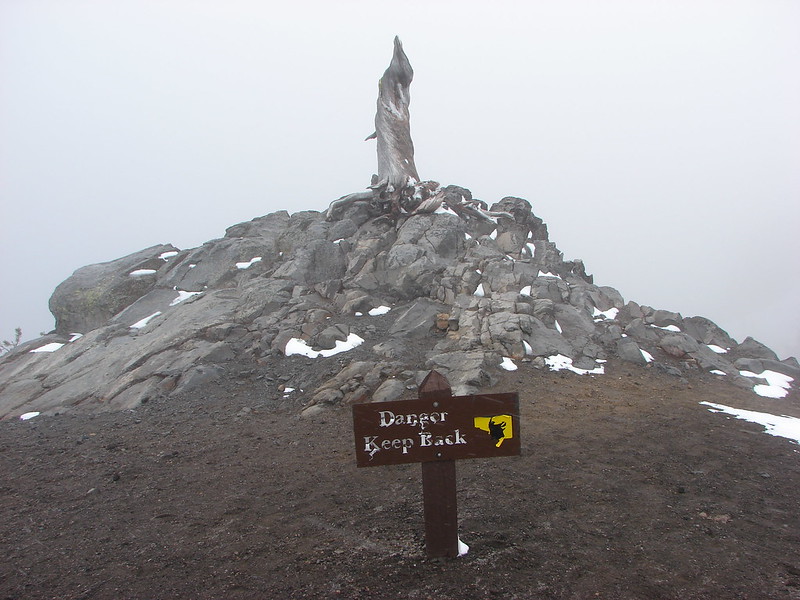 We plan on heading back this Fall for another try and maybe then we'll be able to actually see the lake. Happy Trails!