Happy New Year. It didn’t take us long to get our first hike of 2015 in. We had planned on visiting the Oregon Dunes National Recreation Area later this month, but a day off from work and a forecast for clear skies on New Years Day was too tempting to pass up. The Oregon Dunes National Recreation Area is nearly 40 miles of dunes, creeks, lakes, and forest along the Oregon Coast between the cities of Florence and Coos Bay.

The area offers numerous hikes, most of which are fairly short. Our plan was to combine three of these shorter hikes into a longer trek. We started off from the Oregon Dunes Day Use Area 10 miles south of Florence. 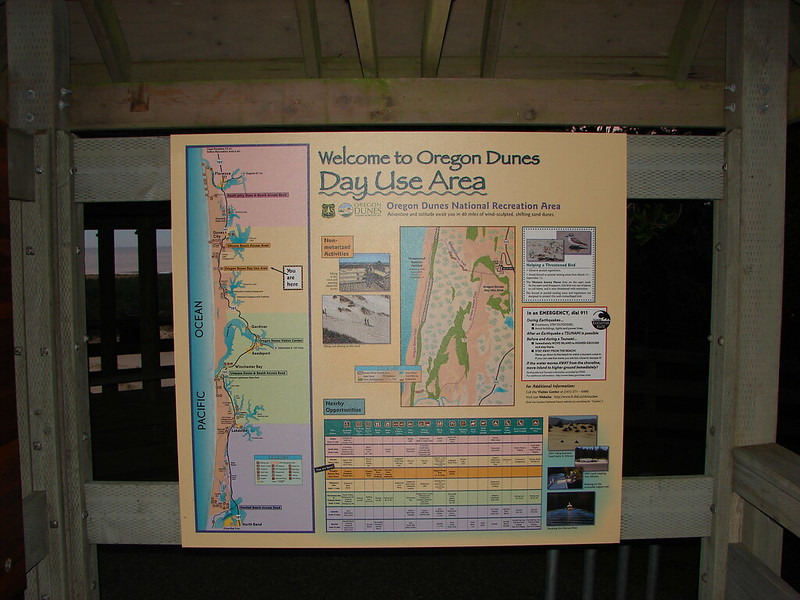 The sun had just risen in the east as we set off creating a colorful scene from the dunes overlook.

A .3 mile descent brought us to the dunes where we followed footprints and posts toward the ocean. 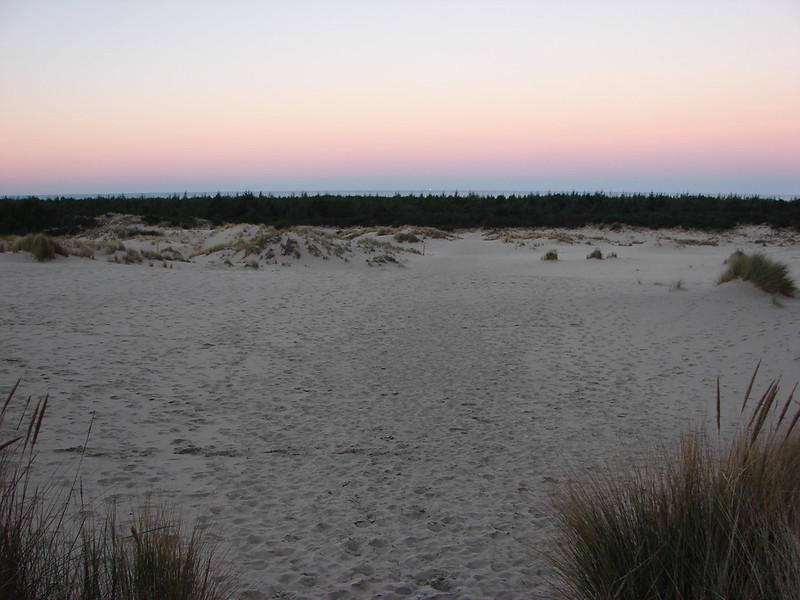 Between the dunes and the ocean the trail passed through the deflation plain, an area created by a non-native beachgrass introduced in the early 1900s which has cut off the supply of sand to the dunes. In the deflation plain marshes and a forest have formed. 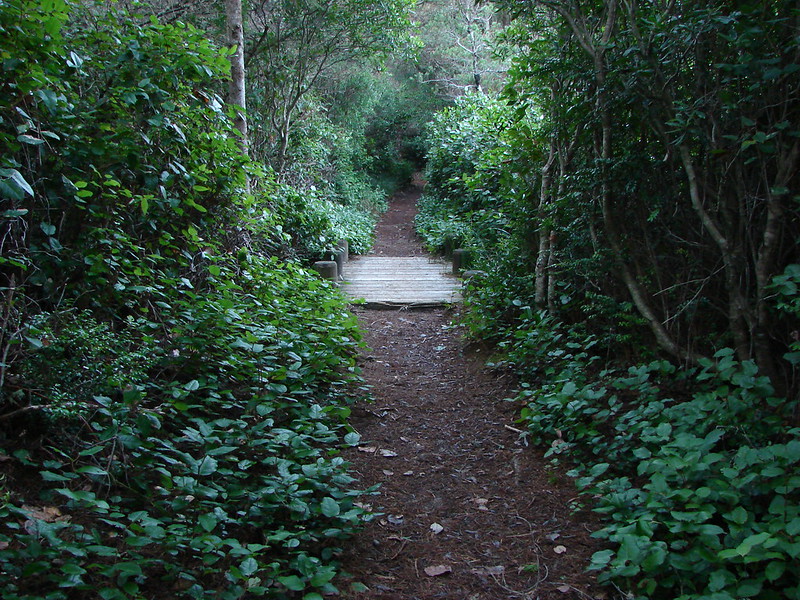 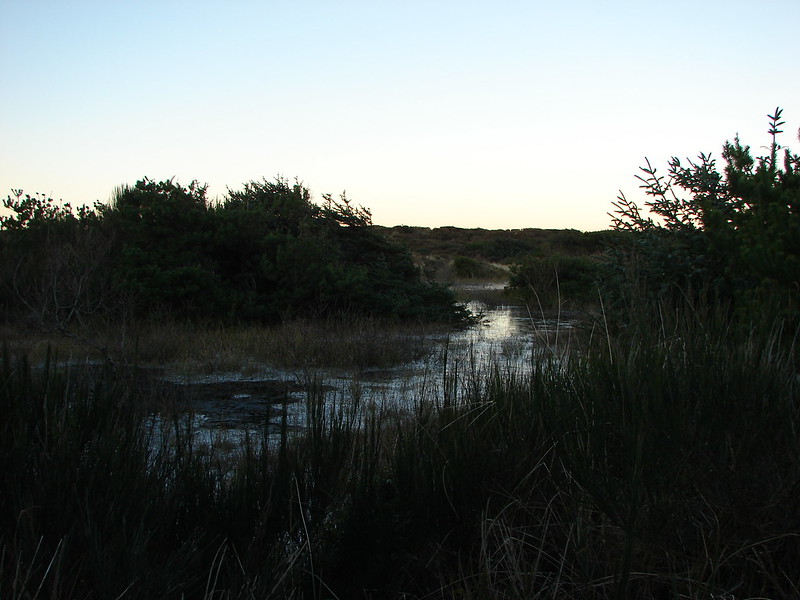 After crossing the plain we arrived at the foredune where the European beachgrass gives way to the beach. 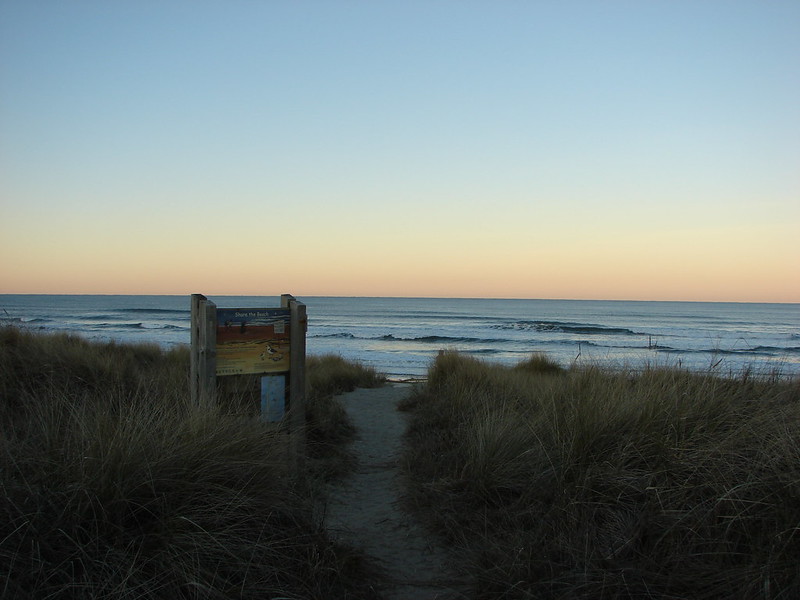 We turned south and headed down the beach. The beach was quite except for the sound of the ocean waves. We were the only people on the beach as far as we could see. Snowy Plovers and gulls were the only company we had. 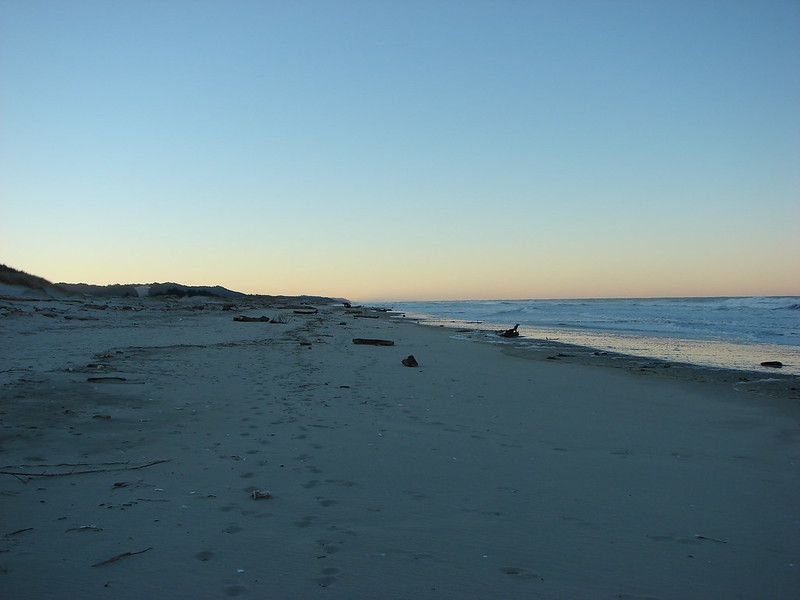 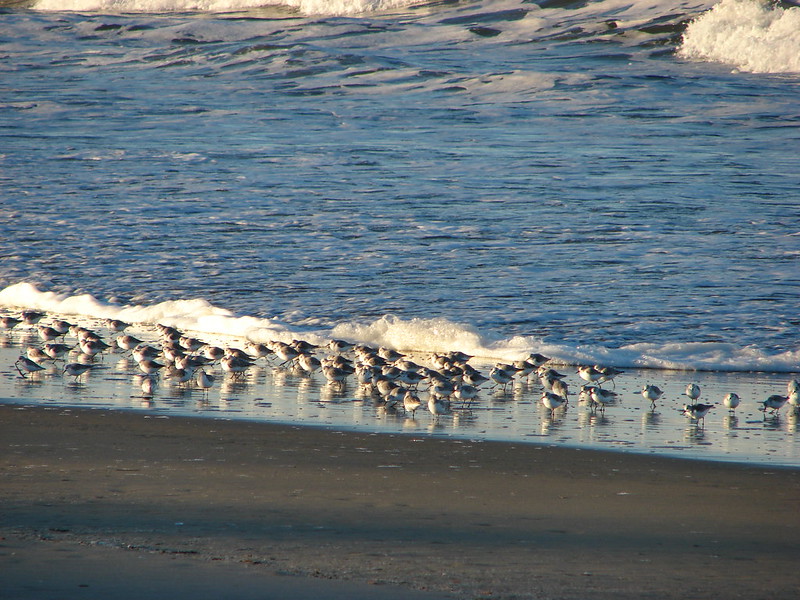 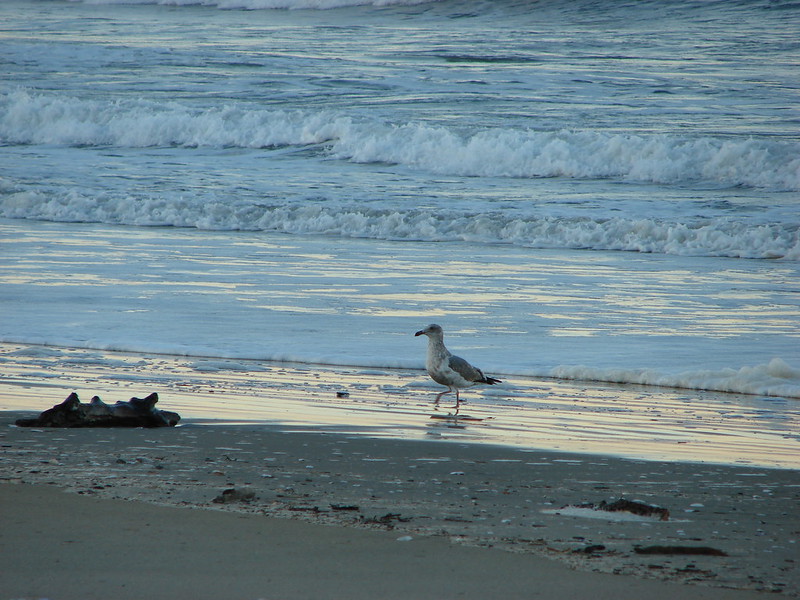 There was quite a bit of debris on this section of beach. There were plenty of the usual pieces of shell and sand dollars along with many items that may have been washed up from the 2011 tsunami that hit Japan. 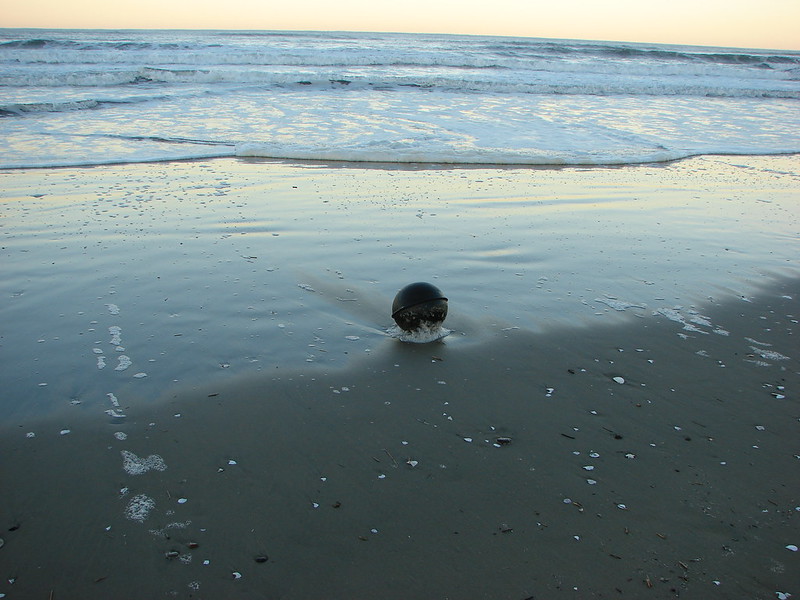 Our original plan was to hike the beach to Tahkenitch Creek then cross the creek and pick up another network of trails on the other side. These other trails would take us on a loop past Threemile Lake, through the Tahkenitch Dunes and back across Tahkenitch Creek further inland where we would then finish the Oregon Dunes Loop. We abandoned that plan upon arriving at Tahkenitch Creek. It was wider and deeper than I had anticipated and neither of us were willing to wade across with the temperatures hovering around freezing. 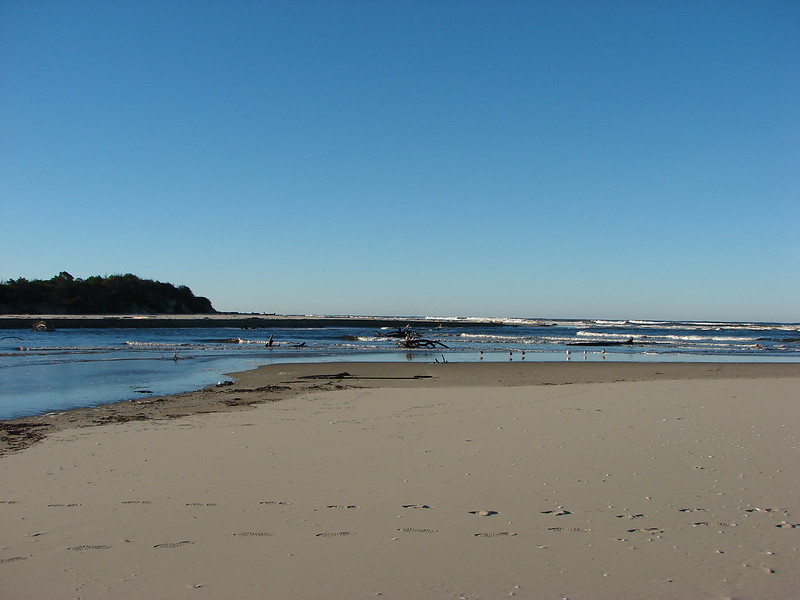 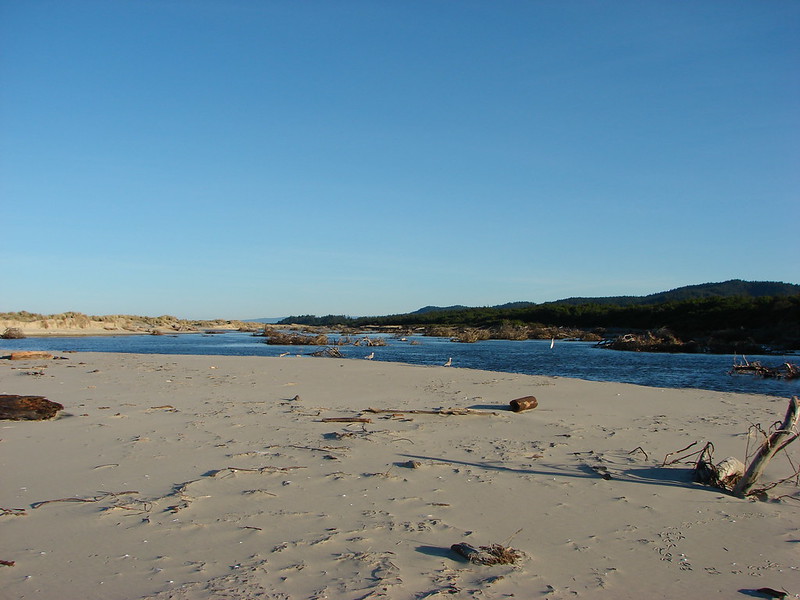 We turned to Plan B which was to backtrack to the continuation of the Oregon Dunes Loop, return to the car and then drive to the Tahkenitch Dunes Trailhead. We turned around and made our way back up the beach to a hiker sign marking the loop. 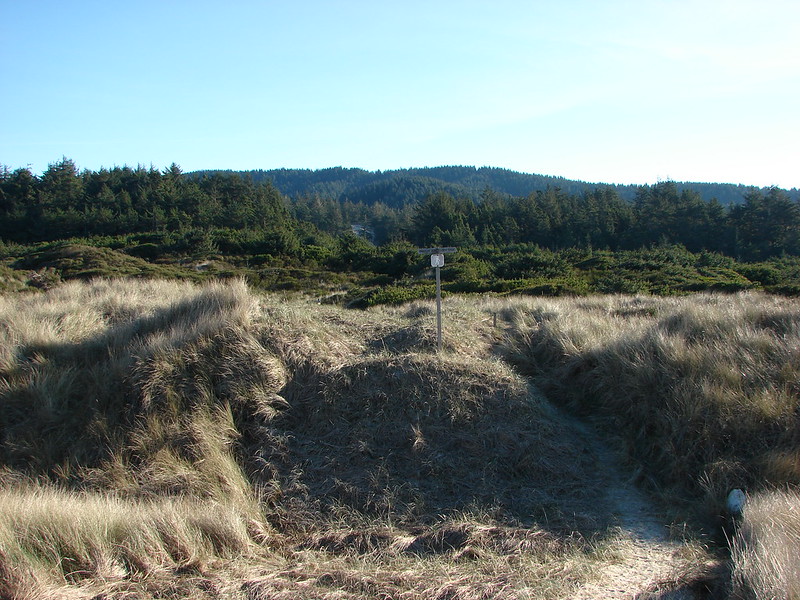 This section of trail passed by a bend in Tahkenitch Creek before returning to the dunes and completing the loop. 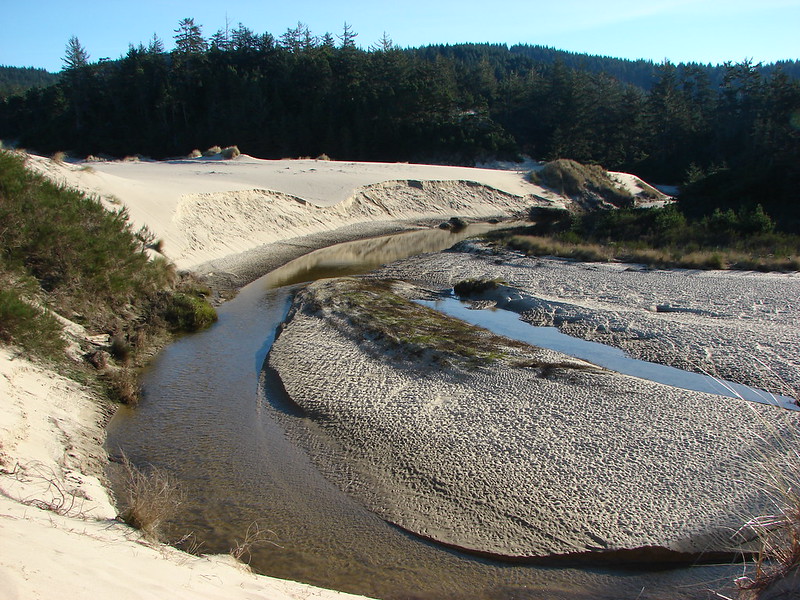 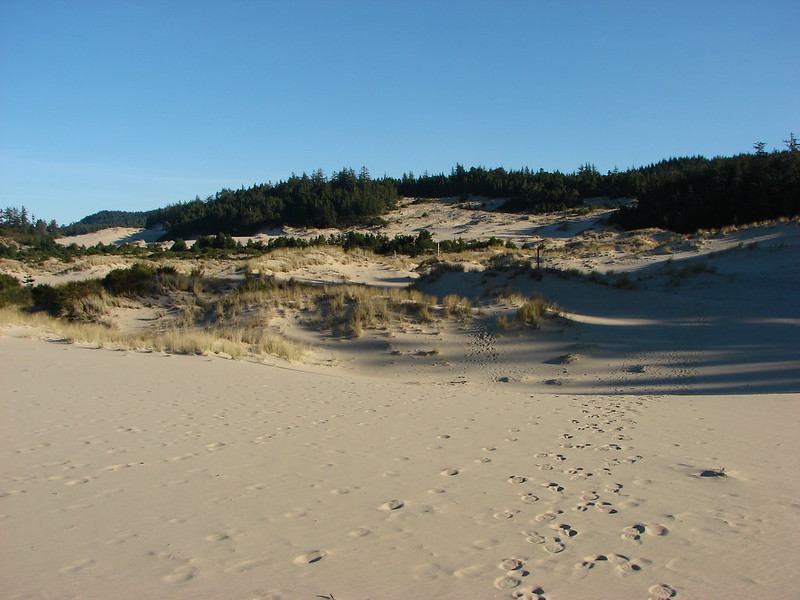 We had wound up hiking a little over 8 miles by the time we reached our car (We didn’t realize we had gone that far until later when I reviewed the GPS information.) and were glad for a short rest while we drove the 3 miles to the next trailhead. 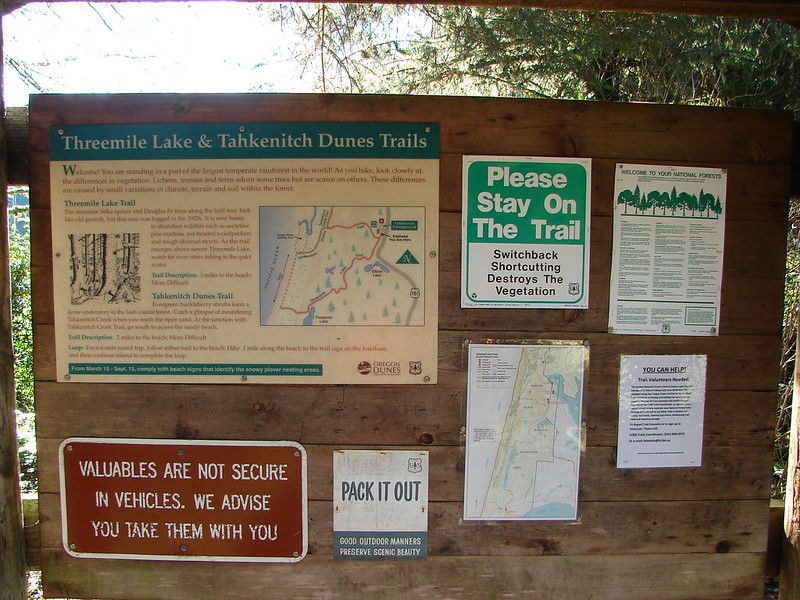 The trail here started in a nice forest leading .2 miles to the start of our next loop. 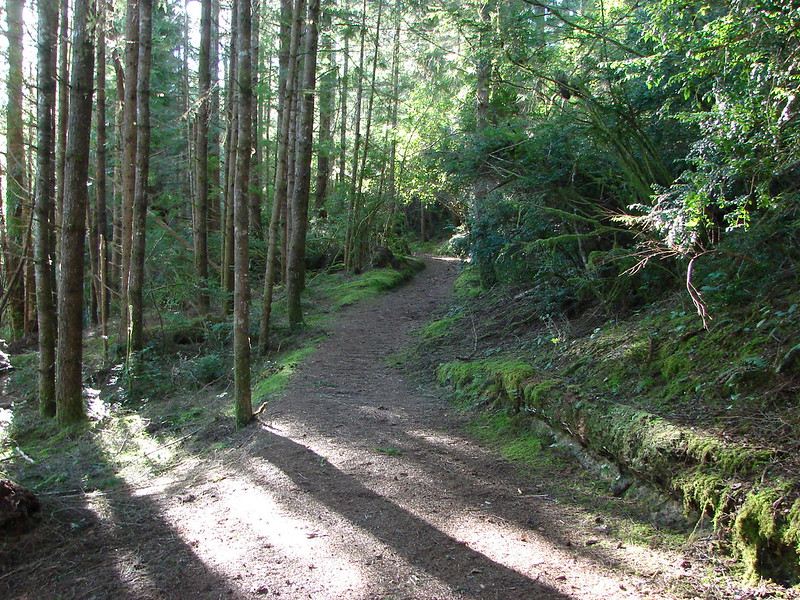 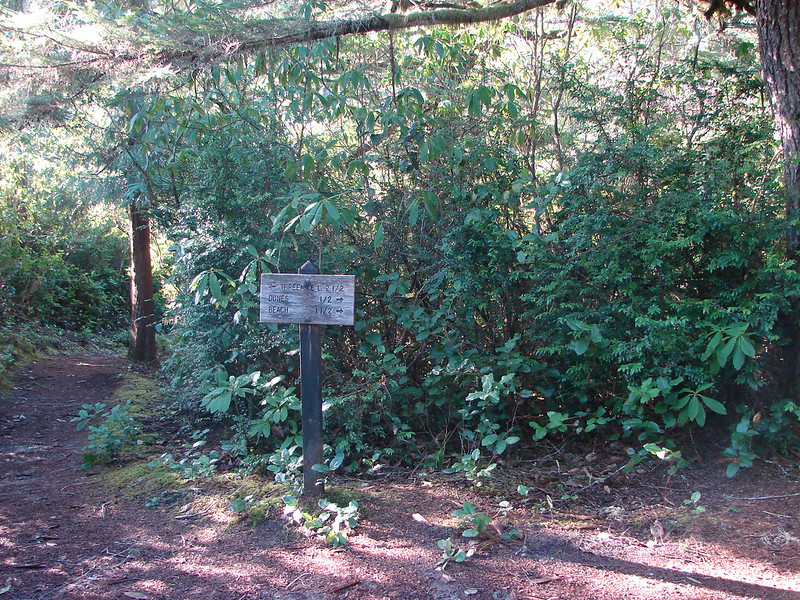 We went right at the junction and headed for the dunes. 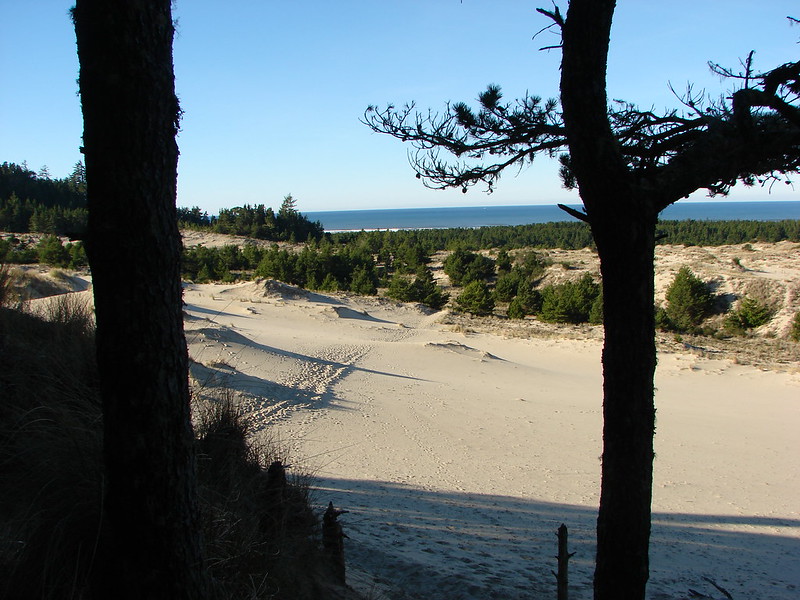 The trail passed over the dunes and then through a more substantial forest before reaching Tahkenitch Creek near the ocean. 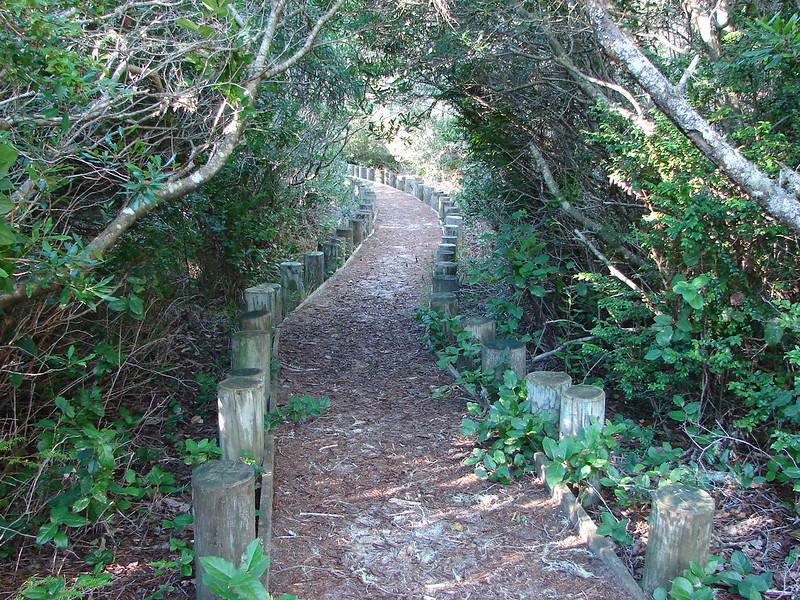 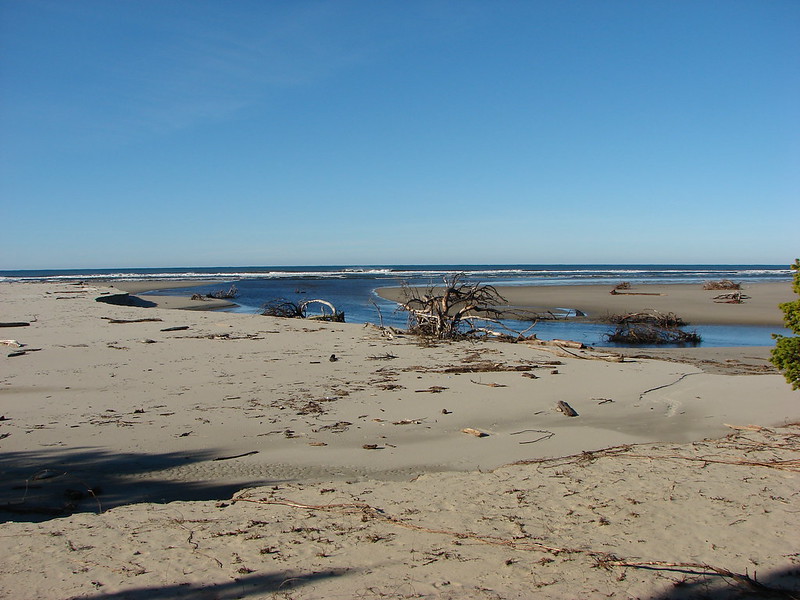 The trail led down to the beach where we again turned south for a mile (the final few tenths of beach are open to vehicles) to another sign marking the loop. The sign was a bit hard to spot as it was back away from the foredune a bit. The beach on this side of the creek was much less cluttered. 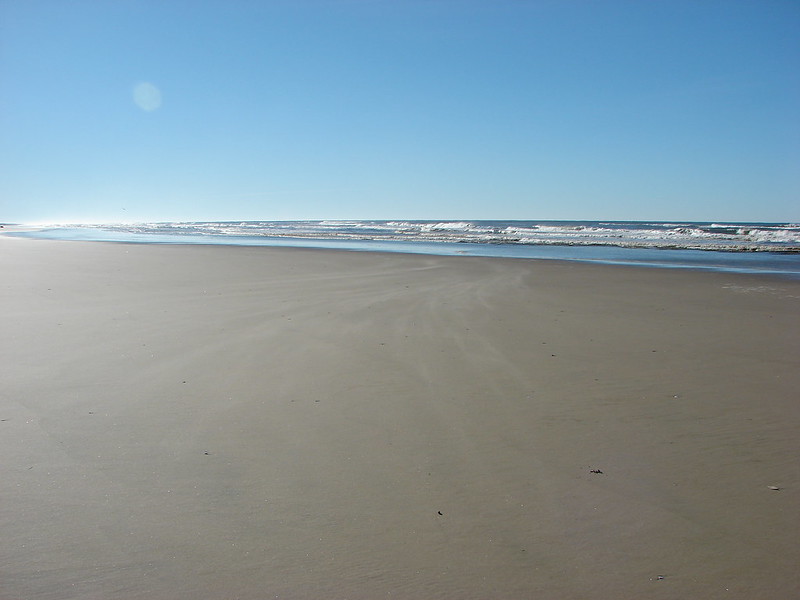 After heading inland for half a mile we arrived at an overlook of Threemile Lake. The lake was 200 feet below us and we decided not to head down the sandy hill to visit it because neither of us felt like climbing back up that much sand. We opted to take a short snack break above the lake before continuing on our loop. 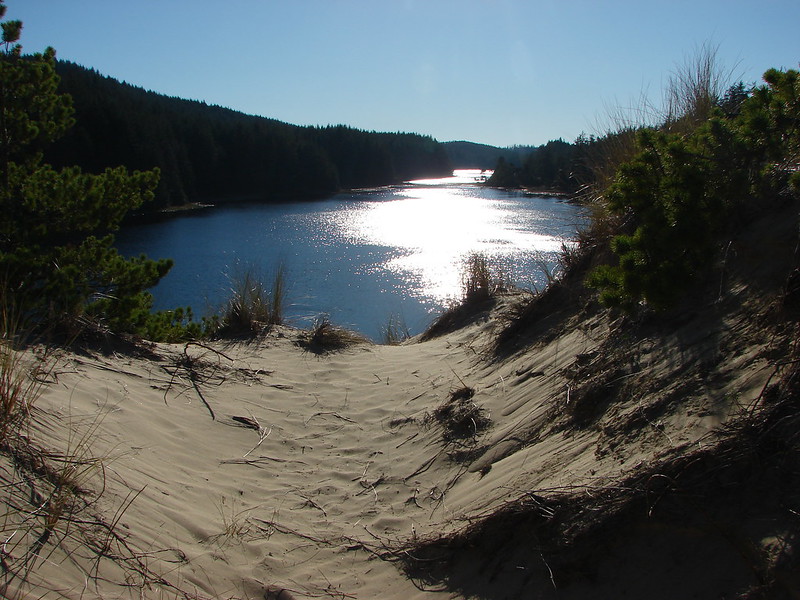 The loop continued for 2.7 miles passing through an impressive forest before arriving back at the junction .2 miles from the car. 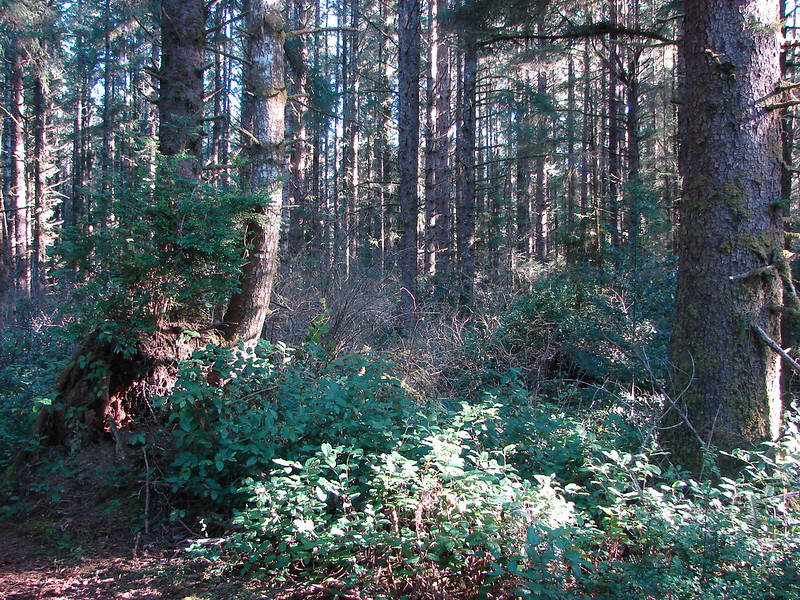 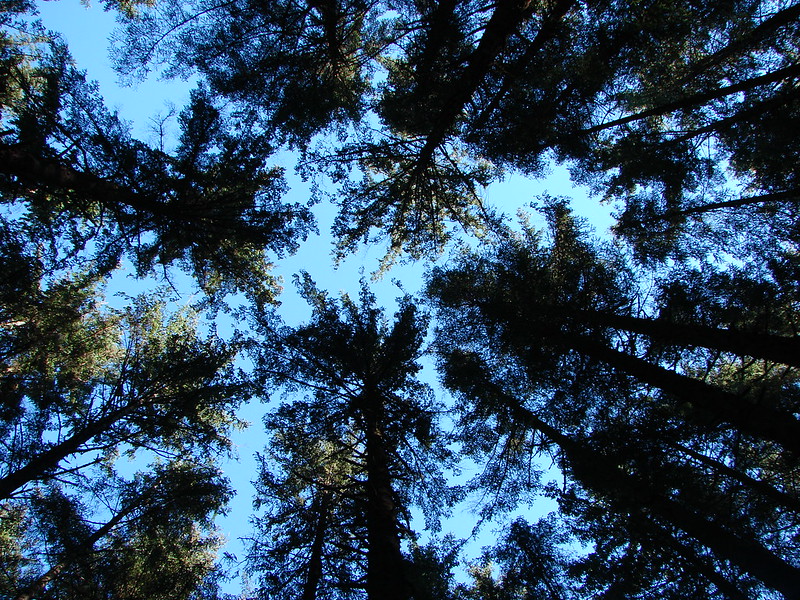 It had been a beautiful day on the beach despite the cold temperatures so we were surprised to have only seen a total of three other people during the day. Two were just heading down on the Oregon Dunes Trail as we finished that loop and the other had driven his pickup down onto the beach south of Tahkenitch Creek. We couldn’t have asked for a better way to start our 2015 hikes. Happy Trails!

One reply on “Oregon & Tahkenitch Dunes”

[…] 2015 (post) we visited the area on either side of this trail but had skipped over this particular trail. The […]