We thought our hikes were done for the year after visiting Chip Ross Park and Dimple Hill earlier this month, but a rare opportunity to hike with our Son on Christmas Eve couldn’t be passed up.  We were heading to Bend to celebrate Christmas with our families and after driving over Santiam Pass  we met up with Dominique and drove to the Flatiron Rock Trailhead on Highway 20 east of town. 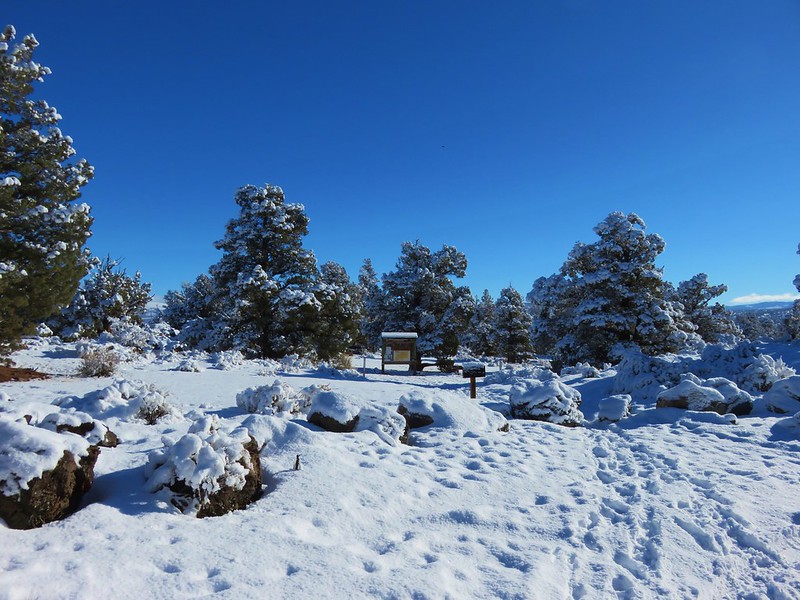 Our plan was to repeat part of a 22.6 mile hike we had done this past May. This time around we were shooting for a 7 mile hike out to Flatiron Rock and back.

We followed the same course as on our previous visit starting out on the 1.9 mile Ancient Juniper Trail. Unlike last time there was a few inches of snow on the trail and more along side it. 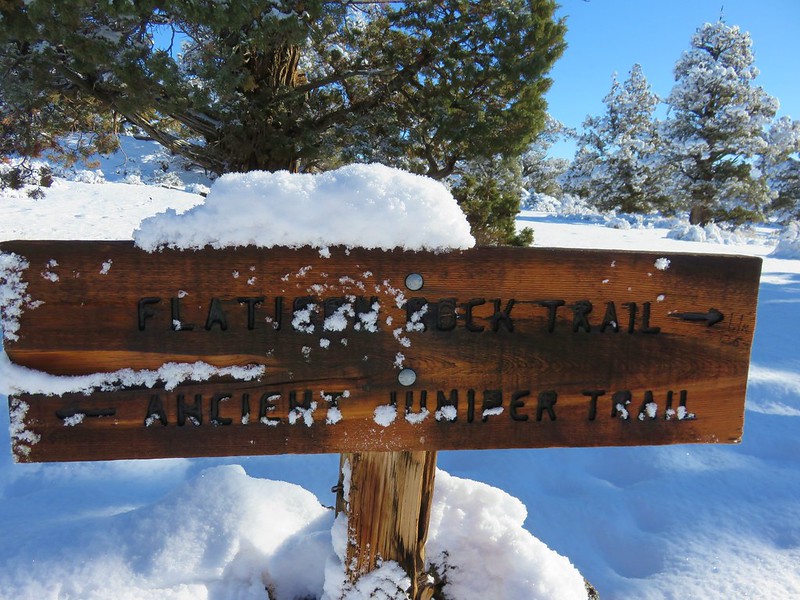 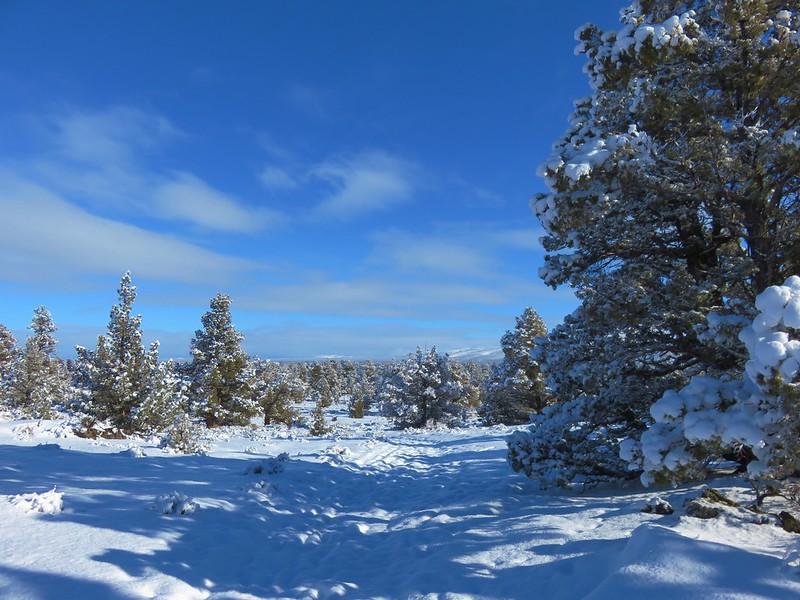 It was a beautiful day with temperatures just below freezing. The sagebrush and junipers were covered in snow and robins sang as they gobbled up juniper berries. 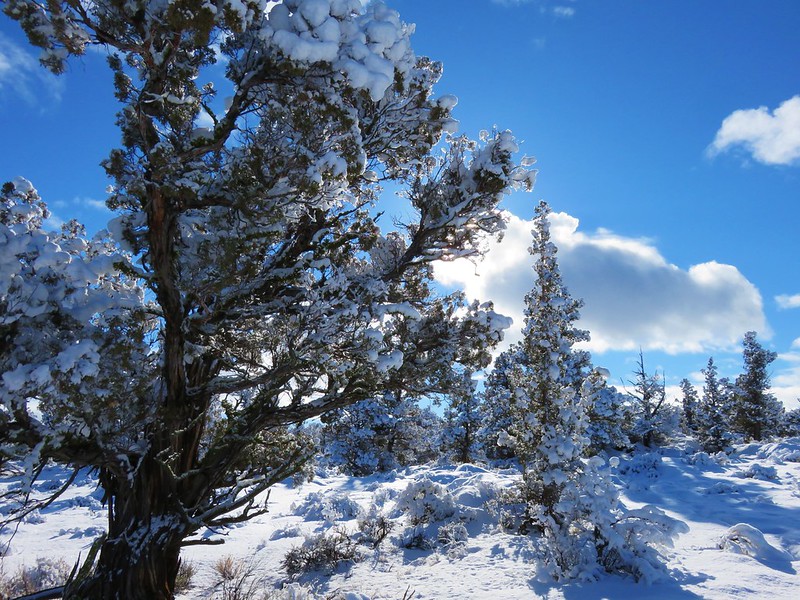 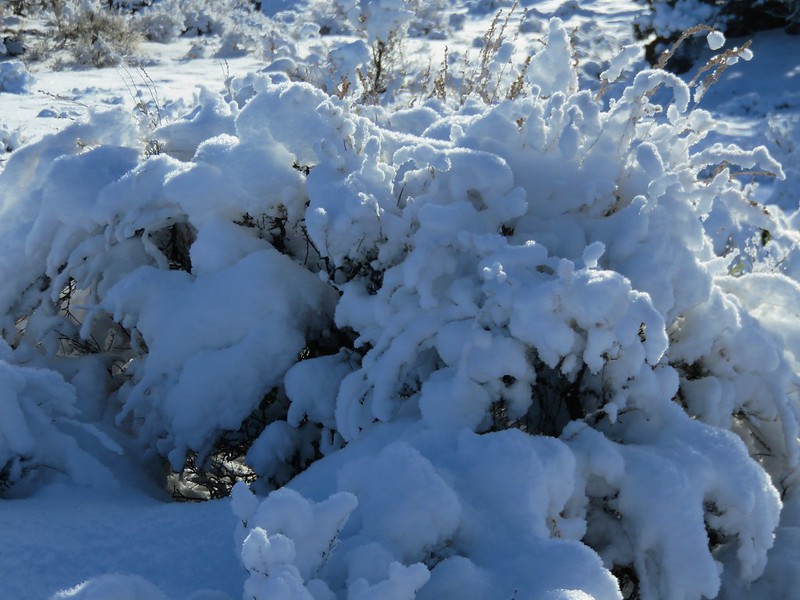 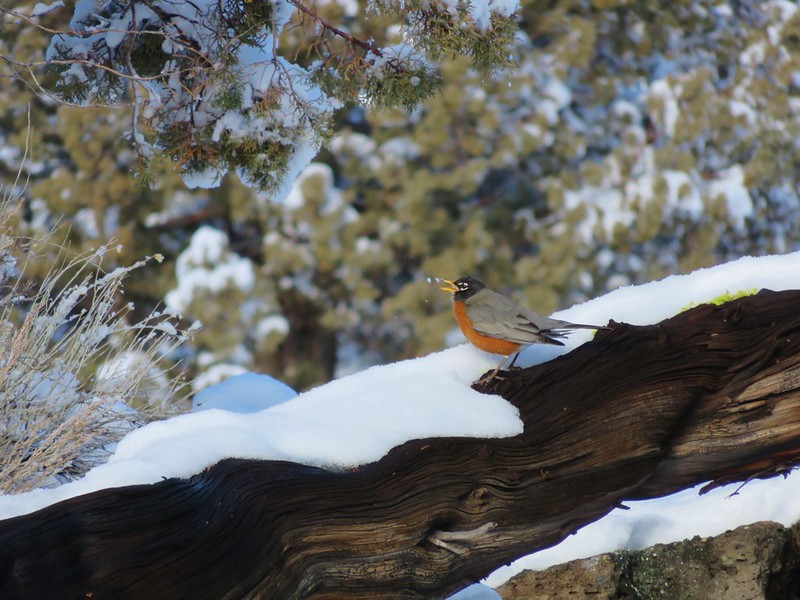 When we arrived at the Ancient Juniper Trail junction with the Flatiron Rock Trail things were a litter whiter than last time. 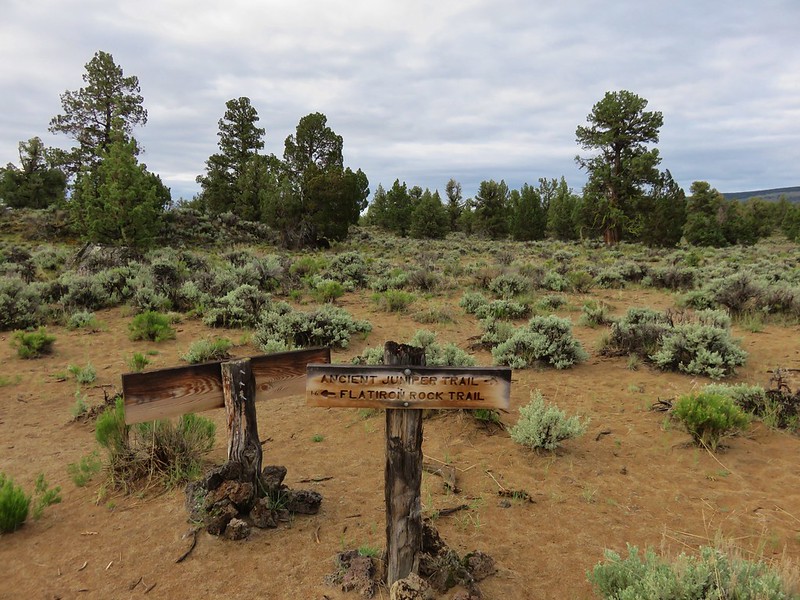 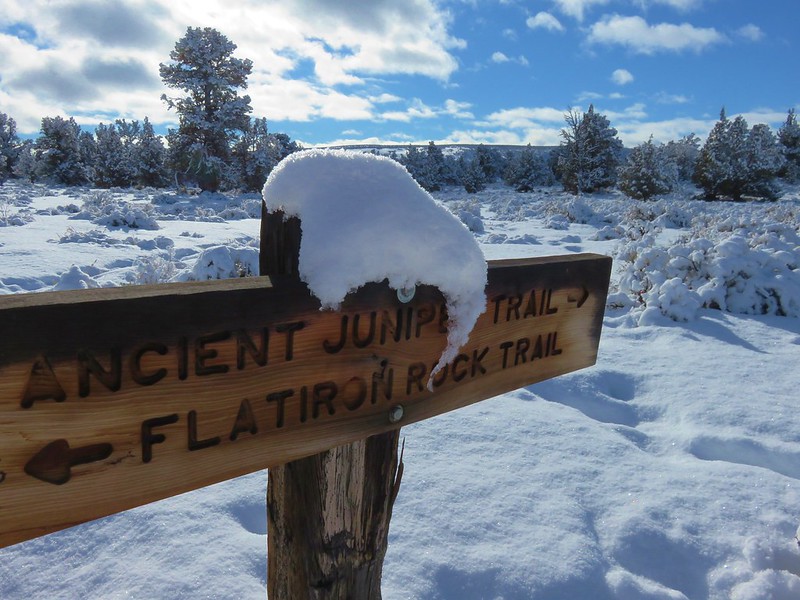 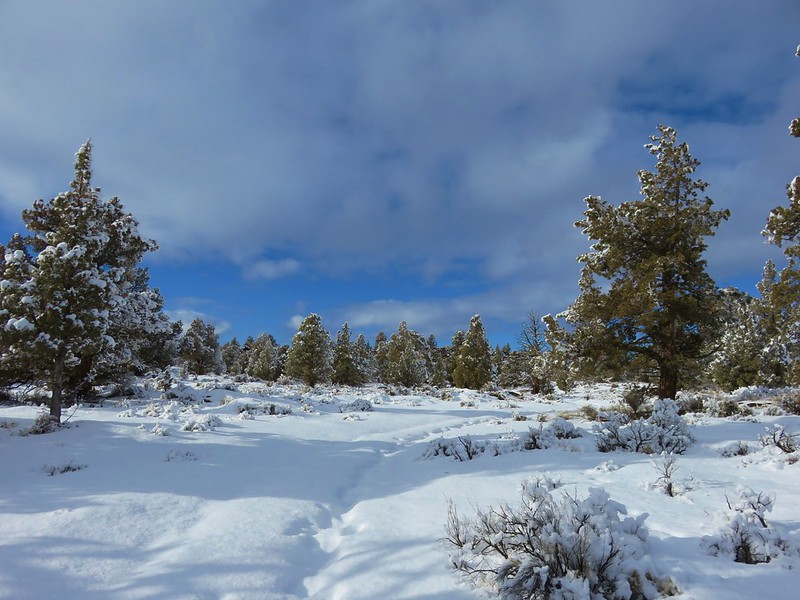 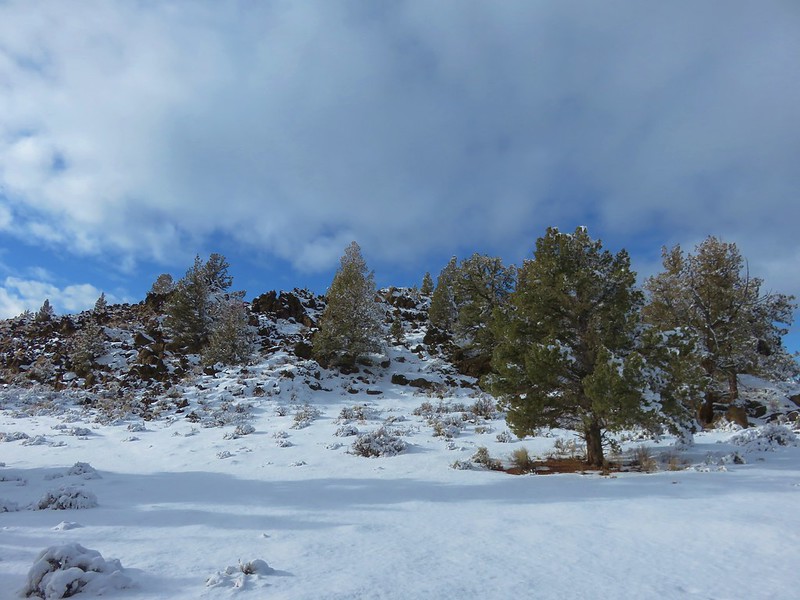 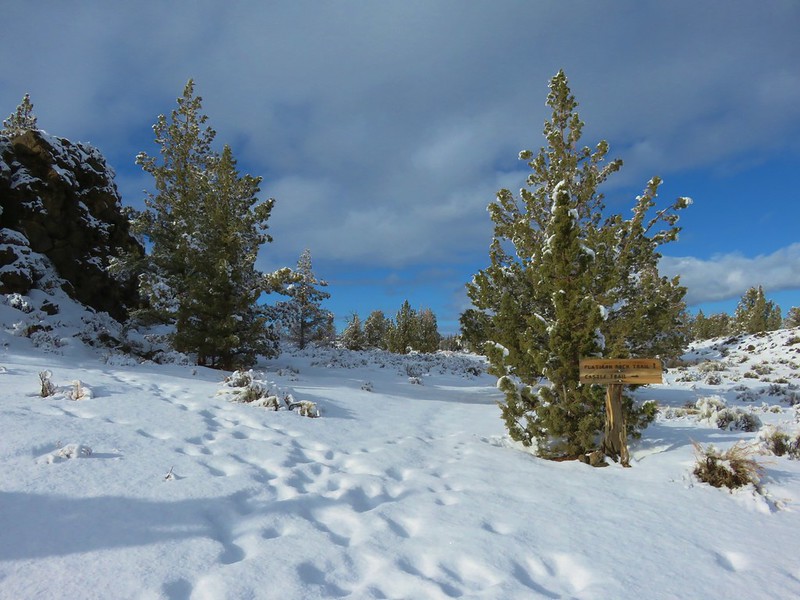 The number of hikers who had been through the snow before us had been dwindling and at Flatiron Rock it appeared that no one had ventured up into the rock itself since the last snow. 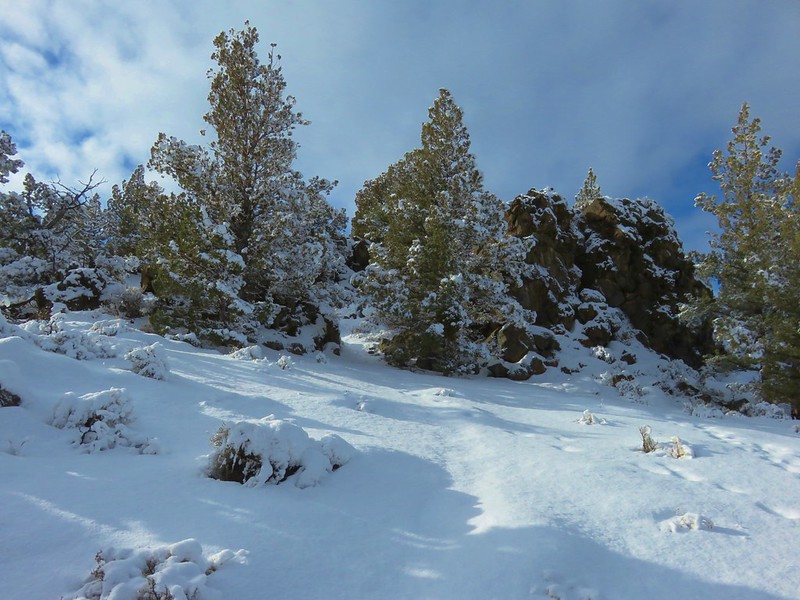 I reached the rock first and headed inside its passageways to get a birds eye view of Heather and Dominique coming up the trail. 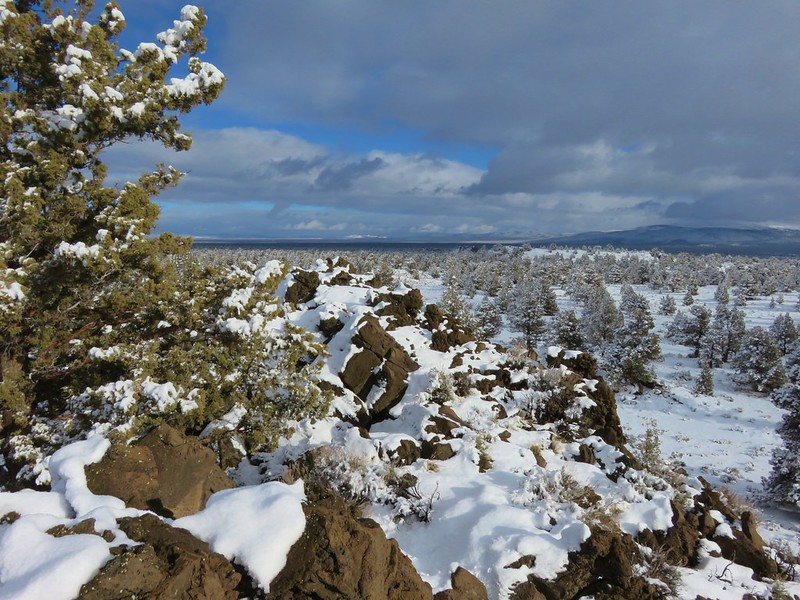 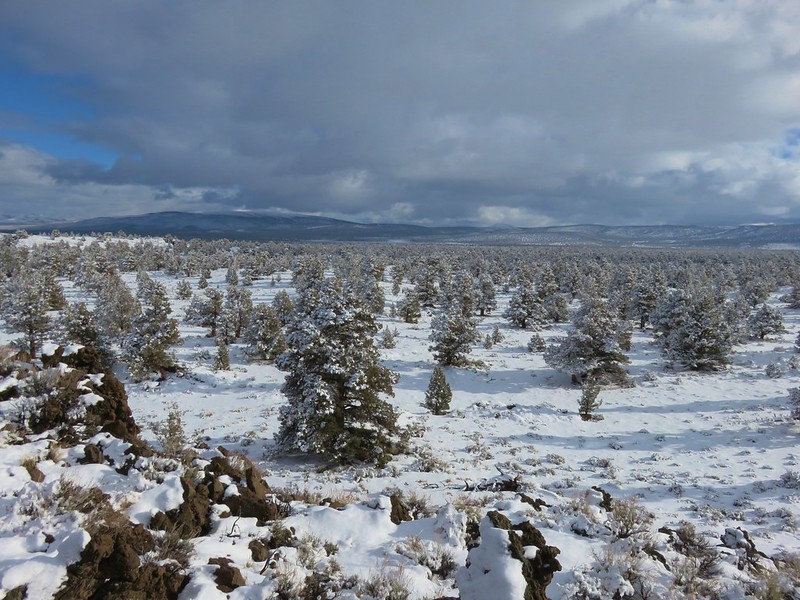 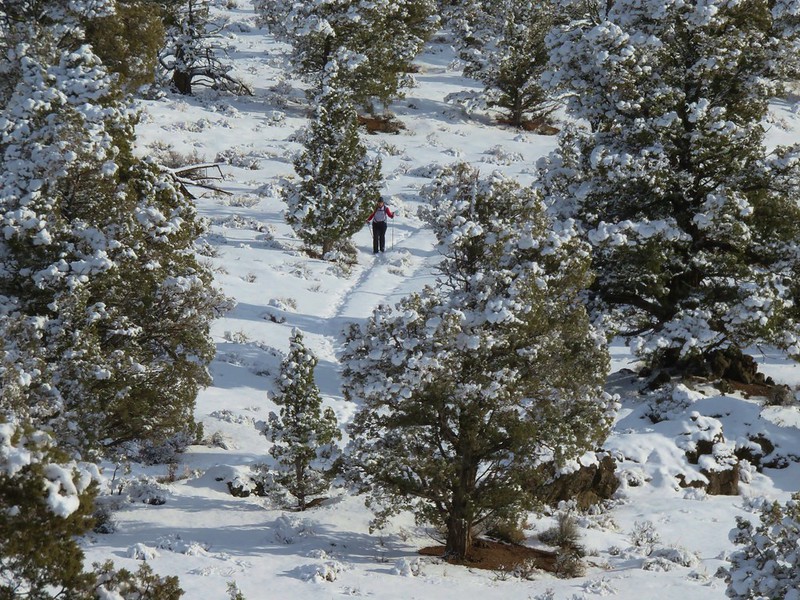 Although a few clouds limited the views from Flatiron Rock they were better than they had been on the cloudy day in May as both the Middle and North Sister appeared on the horizon. 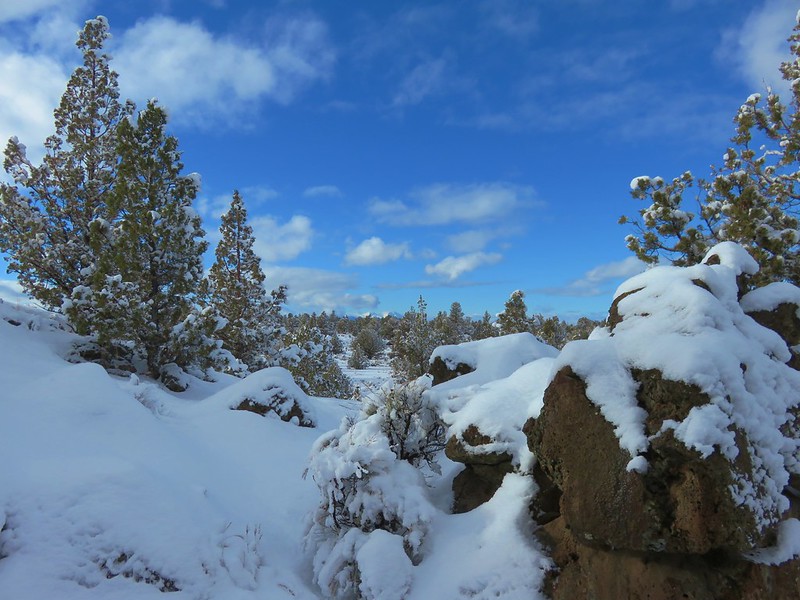 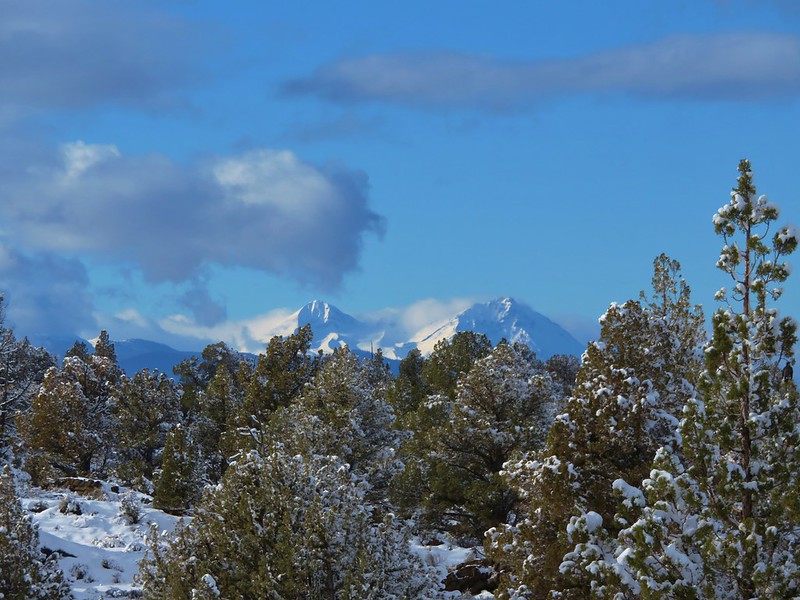 In addition to those 10,000′ peaks Black Butte, Gray Butte, and Powell Butte rose above the high desert. 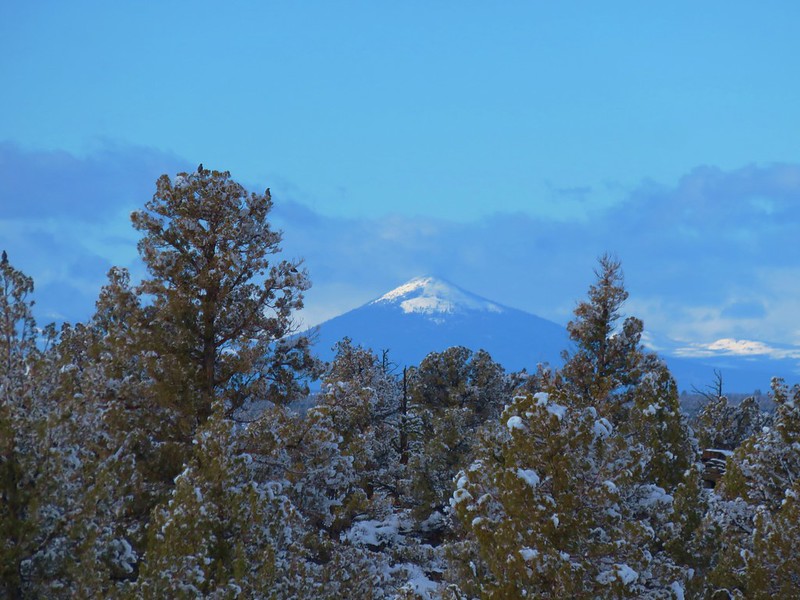 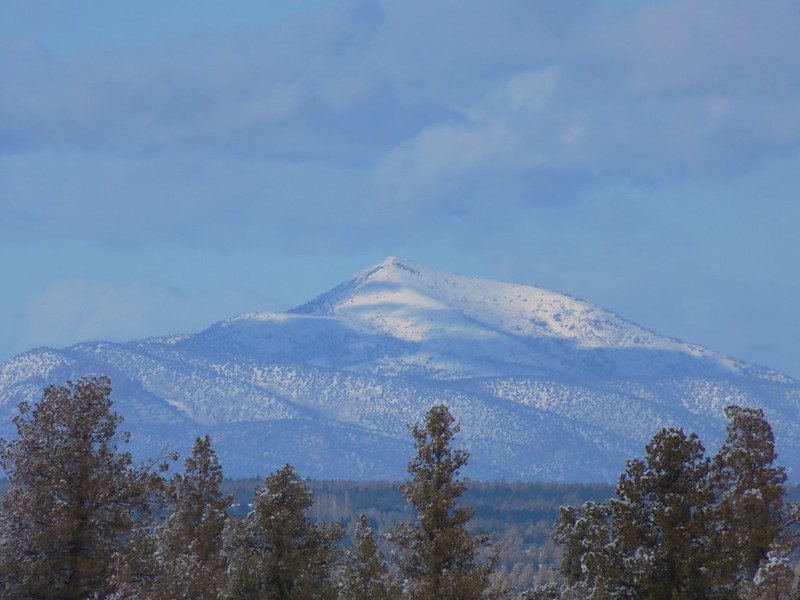 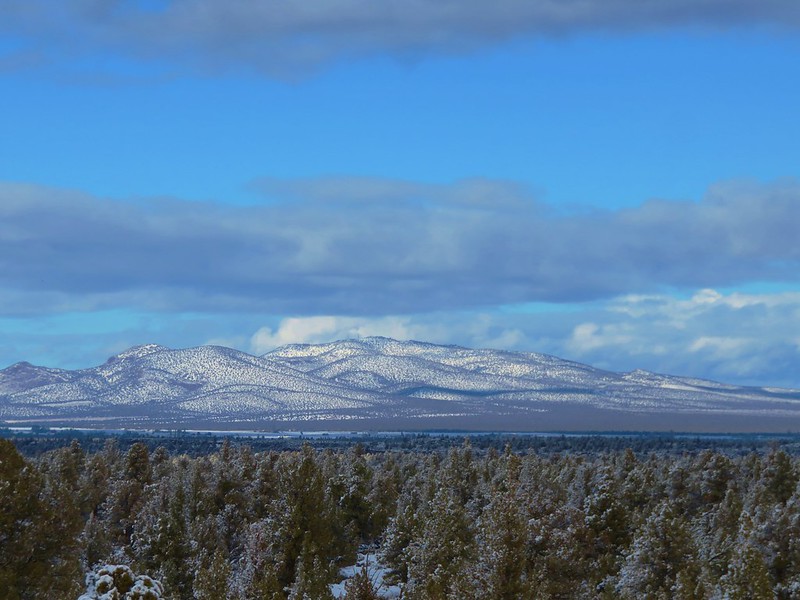 Several passages on Flatiron Rock allow for a nearly half mile loop past colorful lichen and interesting rock formations including a couple of arches. 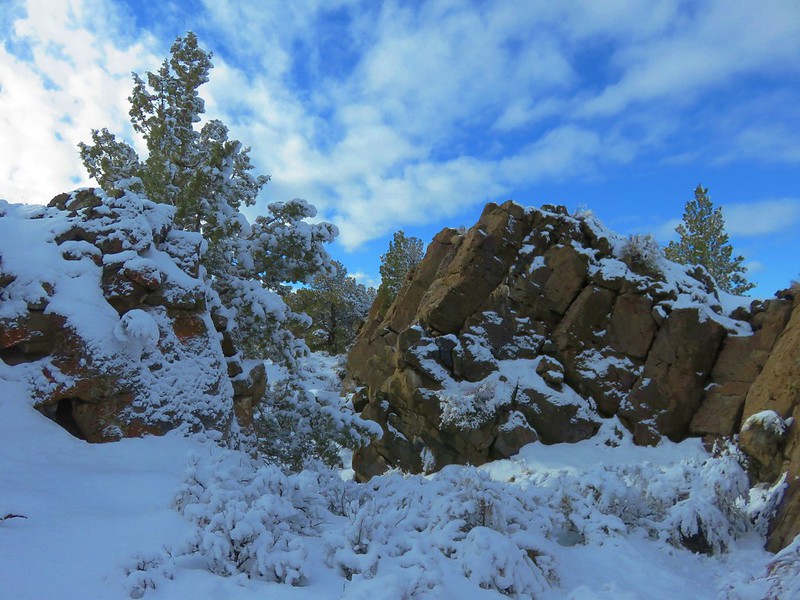 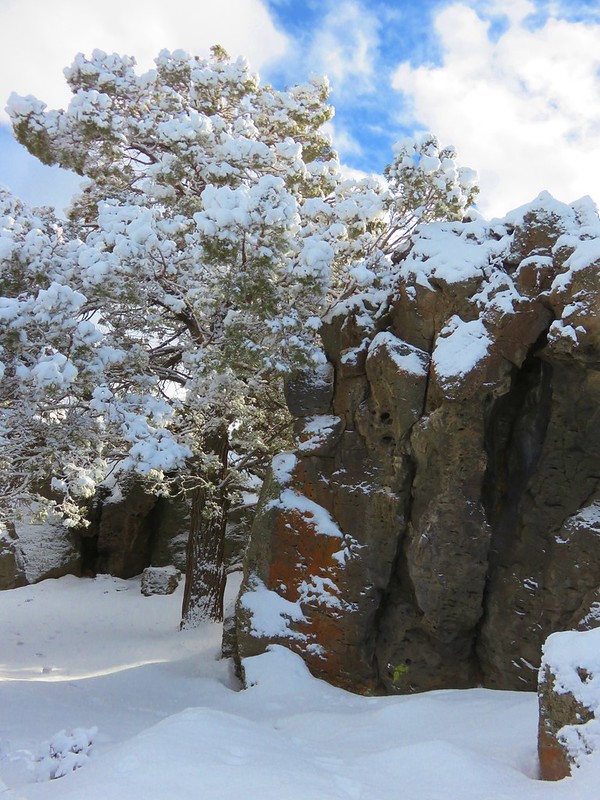 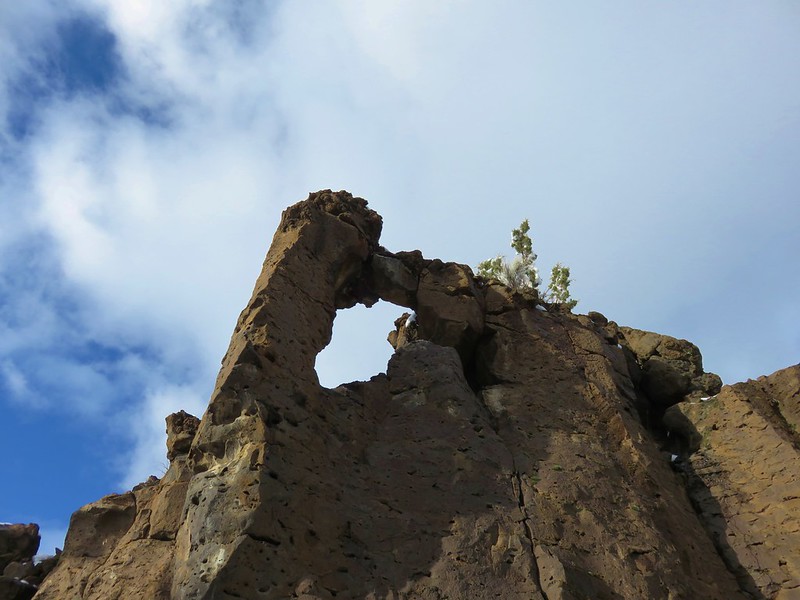 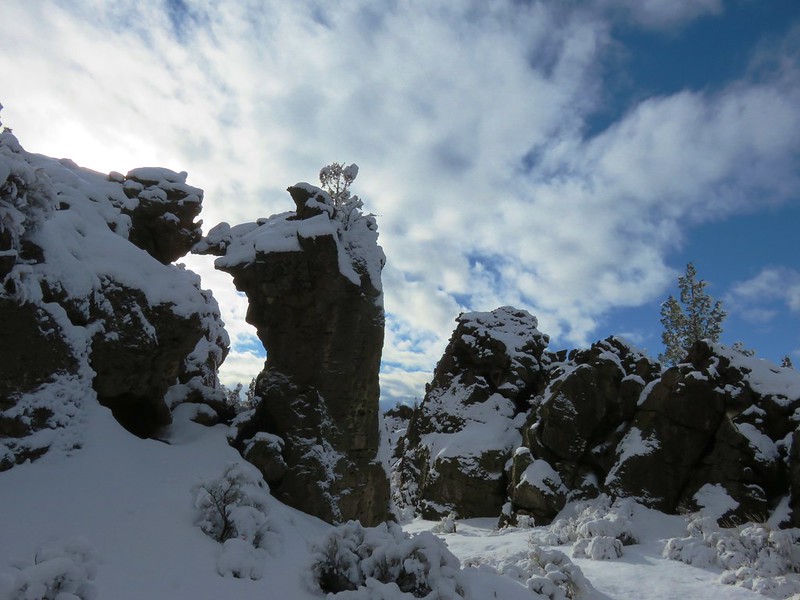 Various animal tracks could be seen in the snow but the only ones we saw were the robins which seemed to particularly like the rock. 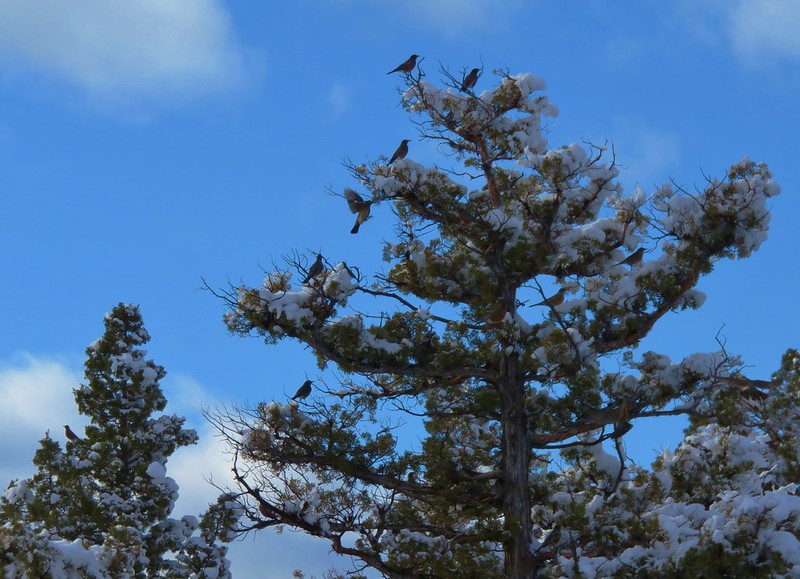 After completing the loop we retraced our steps to the junction with the Ancient Juniper Trail where we remained on the Flatiron Trail for 1.2 miles to the trailhead. Between the passing clouds and the lowering of the Sun the light began to soften along this final stretch sometimes leaving the snow with a beautiful blueish color. 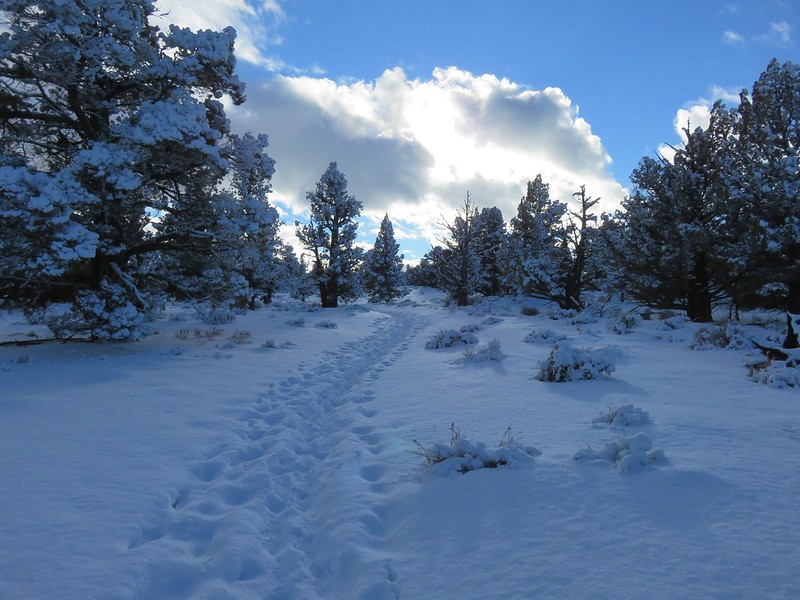 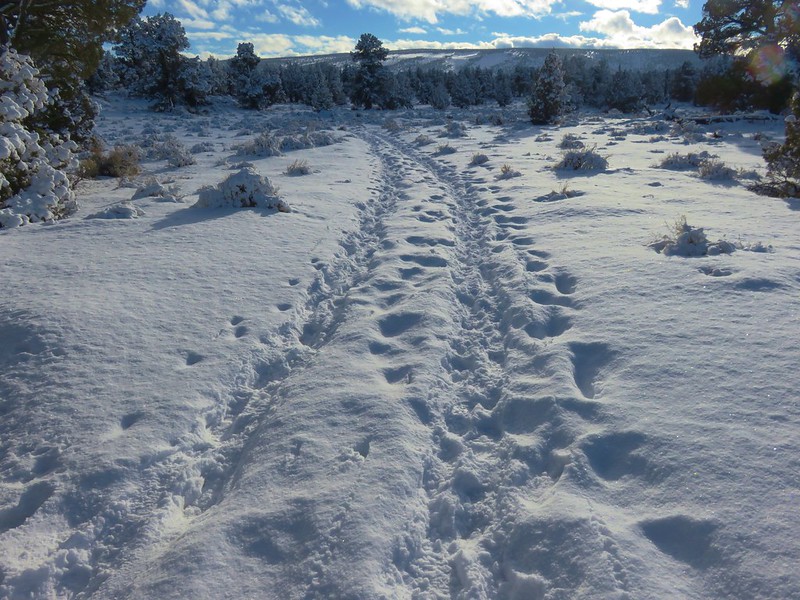 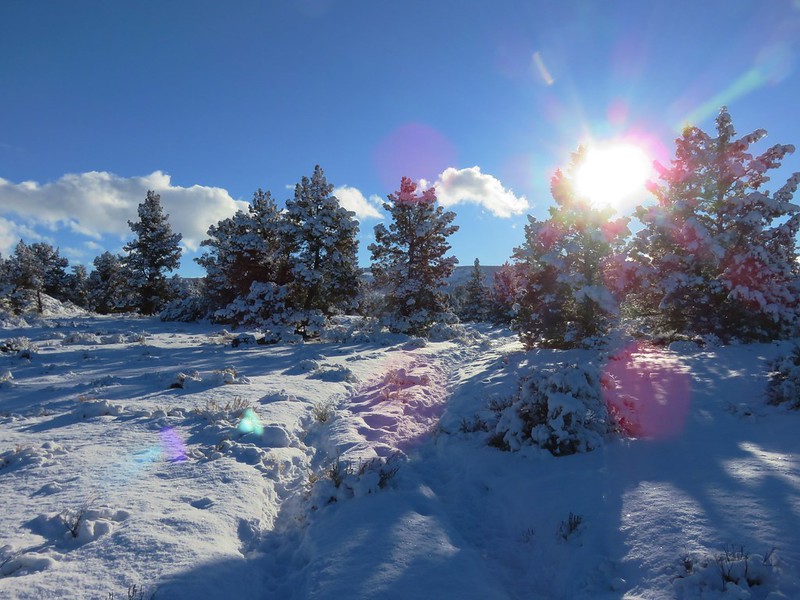 After finishing the hike we drove to my parents house and relaxed waiting for them to return with my brother and his family. It was the perfect way to kick of Christmas weekend and to cap off our 2016 hiking year all in one. Happy Trails (and Holidays)!

[…] between Bend and Jordan Valley to do along the way. We had done the Oregon Badlands twice (post post) and Pine Mountain (post) previously. These were the only hikes that were listed in our “100 […]