We’re going all the way back to July 28, 2010 for this weeks throwback hike. This was our first visit to the Mt. Jefferson Wilderness as well as the first time we attempted an off-trail scramble. We started at the Duffy Lake Trailhead taking the Duffy Lake Trail toward Duffy Lake. 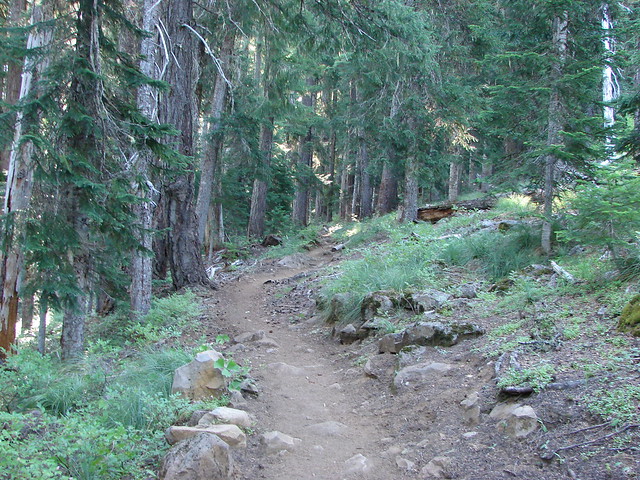 The trail followed along the North Santiam River which was running real low but not yet dry for the season. 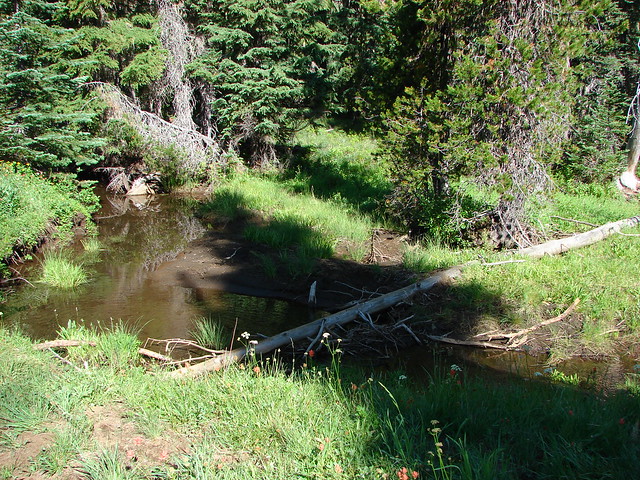 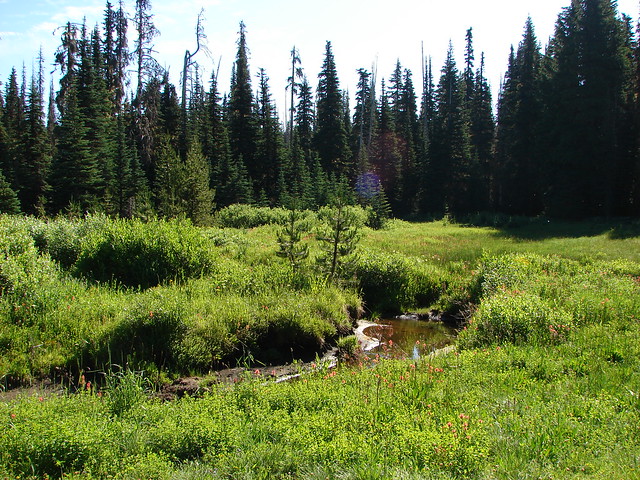 We passed the a junction with the Turpentine Trail at the 1.5 mile mark and crossed the river just over a mile later before reaching another junction in a meadow near Duffy Lake. Although we couldn’t see the lake from there Duffy Butte rose above the trees. 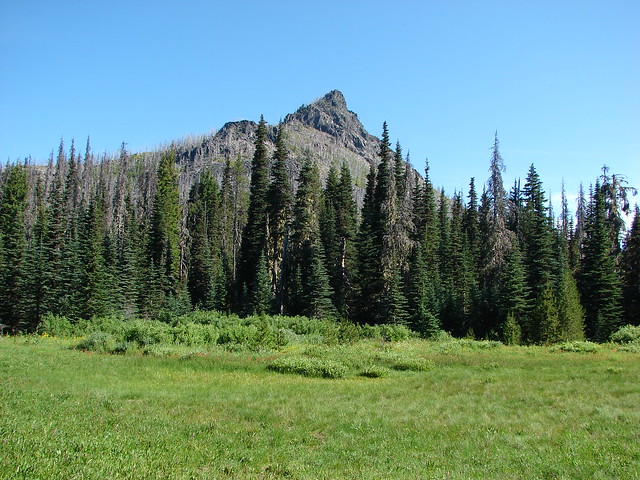 A number of trails were present in the Duffy Lake area. The first junction after crossing the river was with the Maxwell Butte Trail which forked to the right. Before reaching Duffy Lakes outlet creek we took the next fork to thw right which was a short connector trail to the Santiam Lake Trail which we then turned right on following it for about 3/4 of a mile through wildflower meadows to Santiam Lake and a great view of Three Fingered Jack. 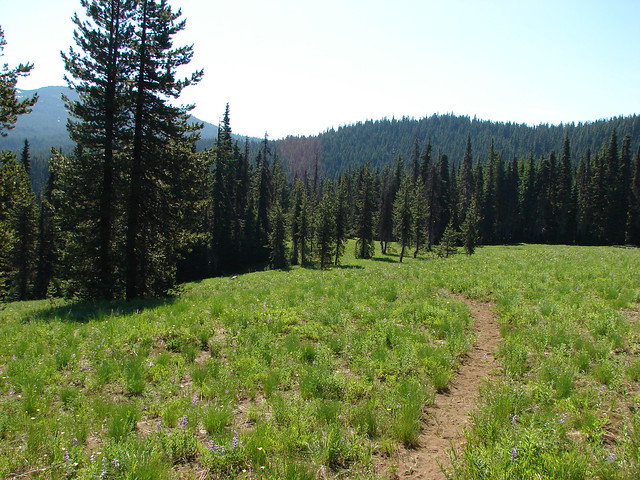 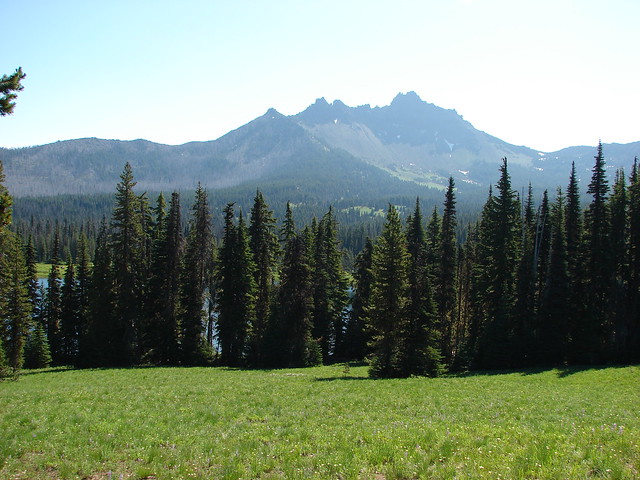 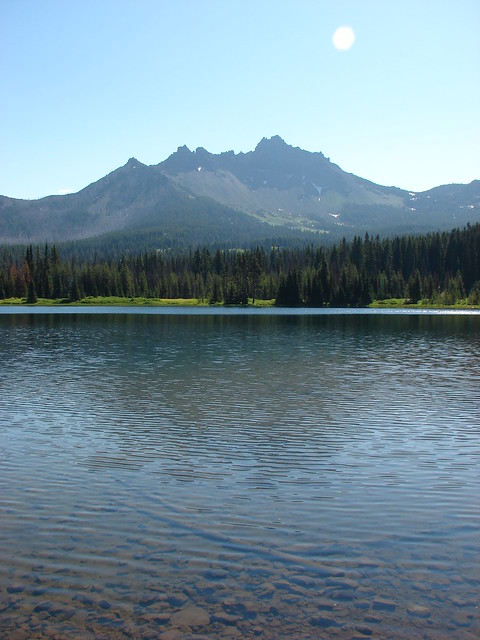 After visiting the lake shore we headed back the way we had come for .6 miles then turning right on the Dixie Lakes Trail at a pointer for the Eight Lakes Basin. 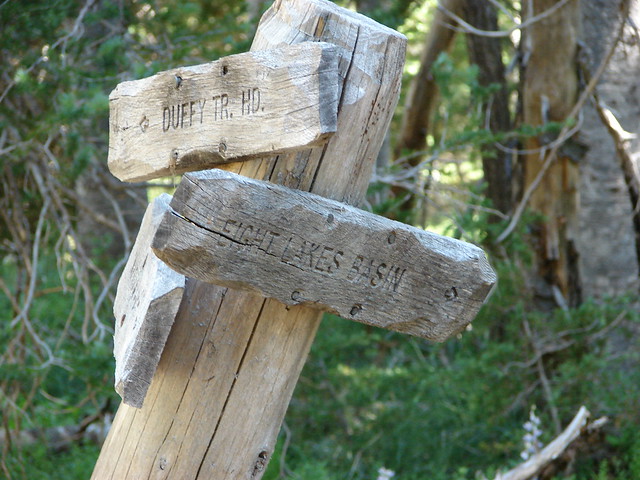 This 1.8 mile trail would lead us pass the small Dixie Lakes before joining the Blue Lake Trail. Much of the trail passed through forest burned in the massive 2003 B&B Fire. 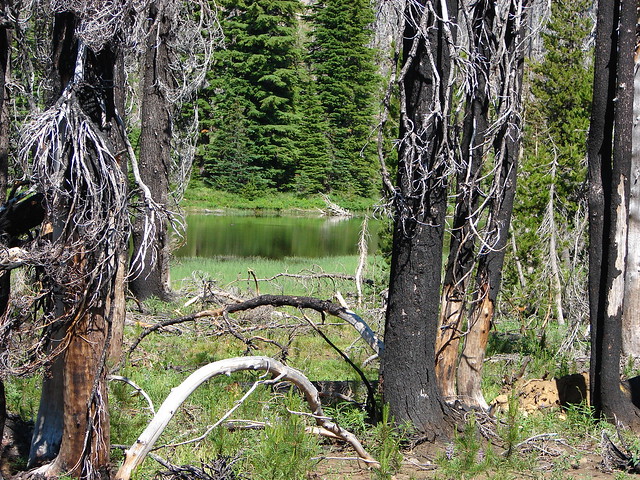 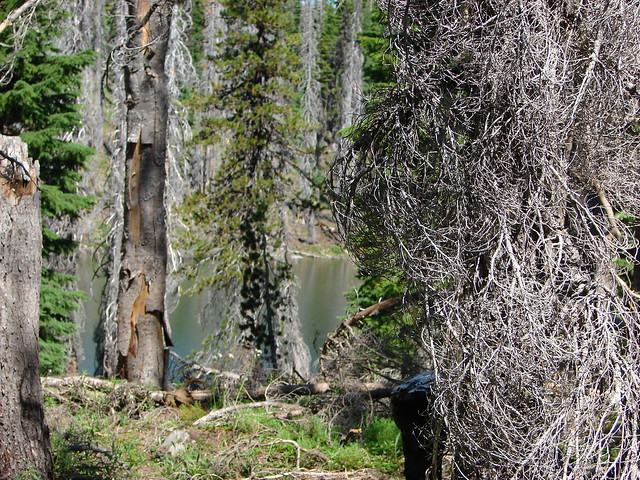 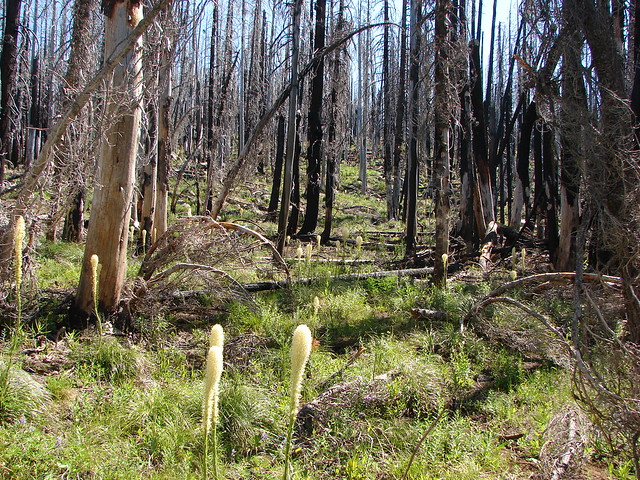 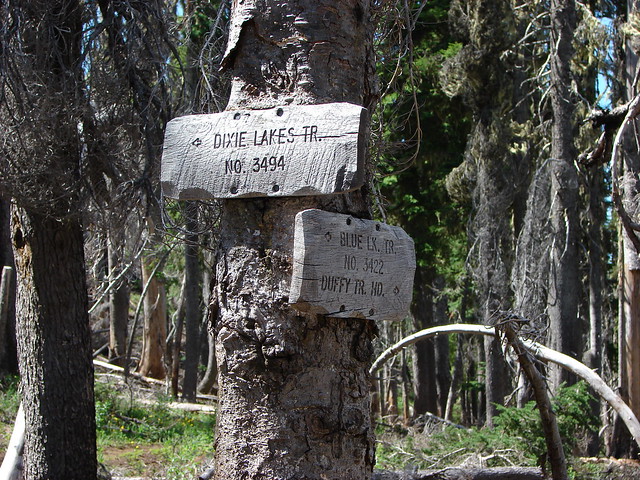 The trail junction was near Alice Lake which was where our off-trail scramble up Red Butte would start. 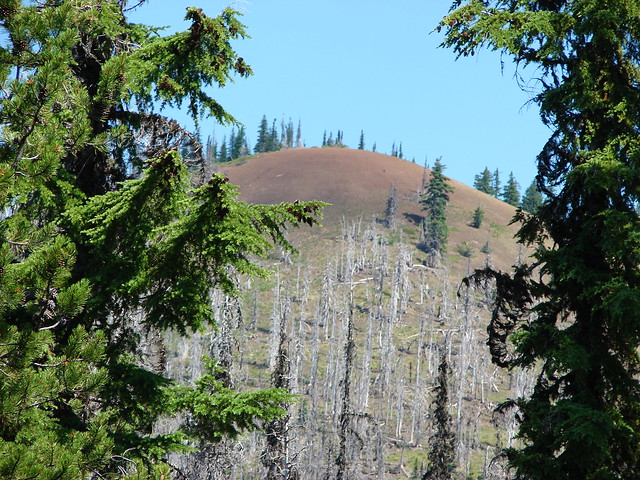 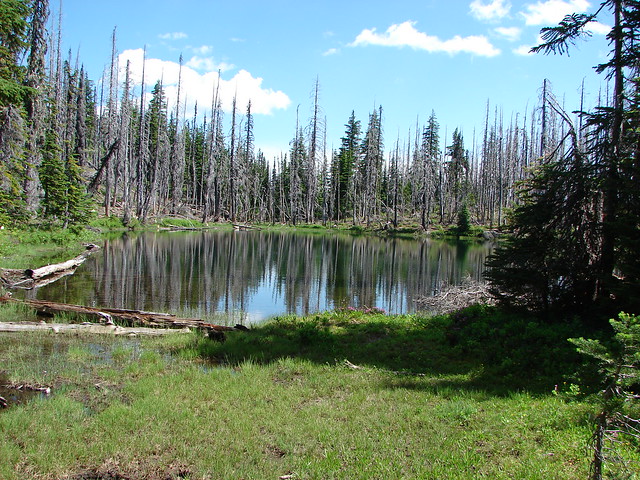 Being our first off-trail experience we weren’t exactly sure what we were supposed to be looking for but we knew that the route started on the west side of the lake and headed up the butte. It was quite the adventure. Just when we thought we might be following a use trail we’d lose it. Some of the butte had been burned in the fire so there was plenty of downed trees and limbs to navigate. The good news with that was we knew we could follow the edge of the burn downhill and we’d wind up back on the trail near Alice Lake so we weren’t too concerned with getting lost. As we neared the summit of Red Butte the vegetation began to give way to more and more cinder where it was much easier to pick out the use trail. 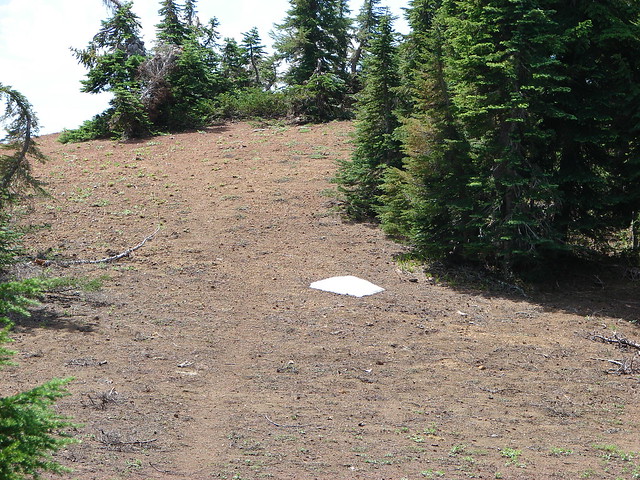 Looking down from the summit we could see little Alice Lake below. 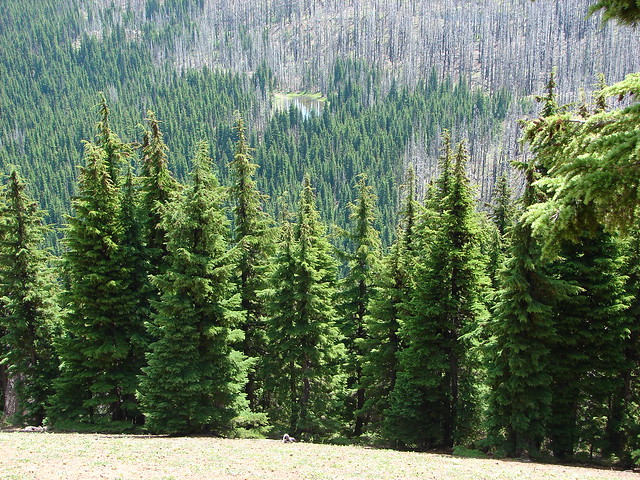 To the south we had a great view of Three Fingered Jack and beyond that loomed Mt. Washington, North Sister, Middle Sister, and The Husband. 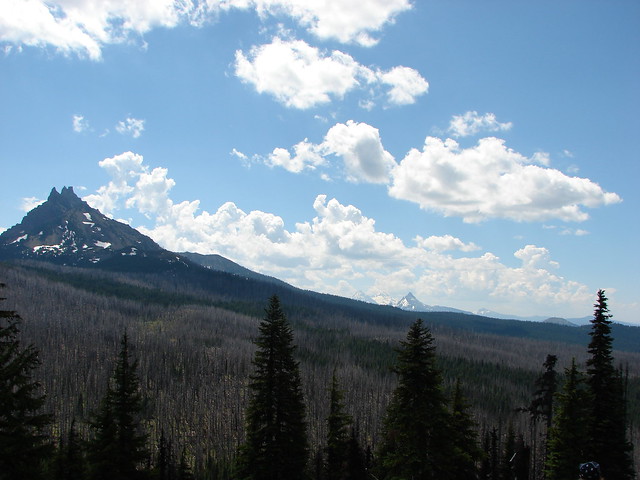 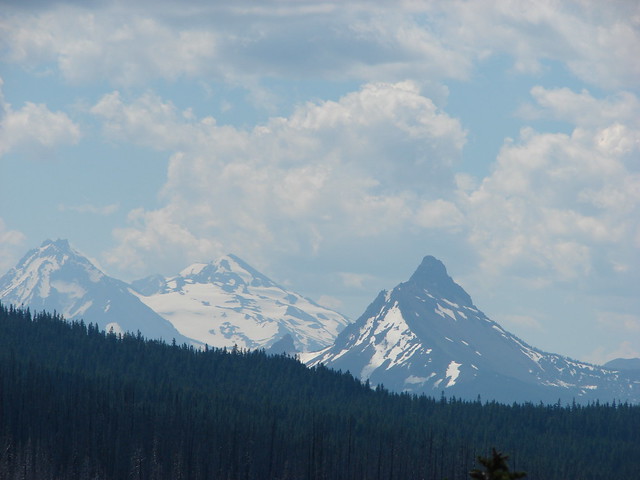 Mt. Washington in front of the North & Middle Sister (with the summit of South Sister behind them all)

Around to the north was Mt. Jefferson. 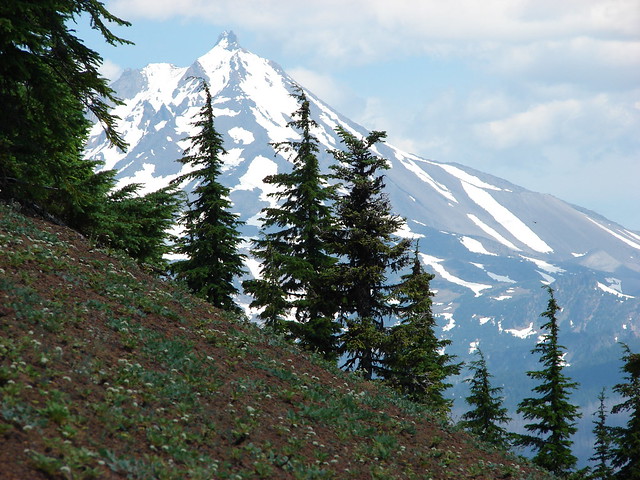 Just to the SW of Red Butte was Duffy Butte and Mowich Lake. 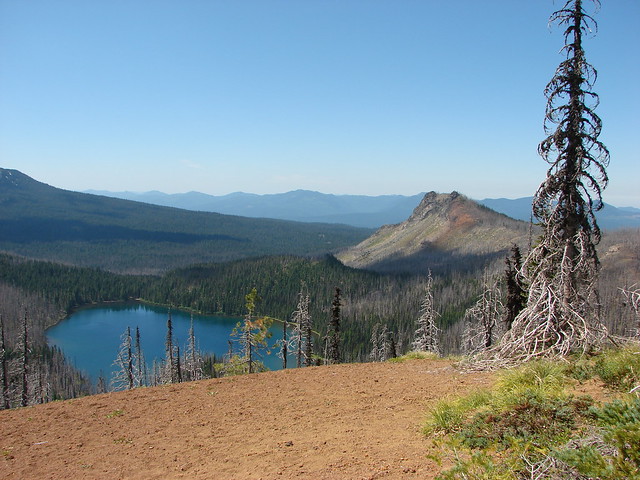 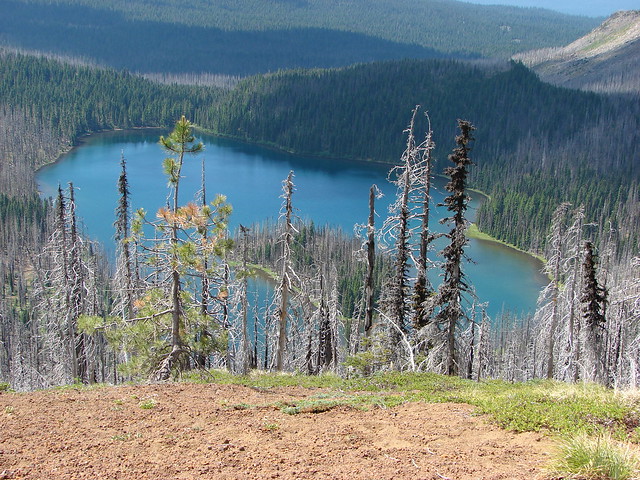 We had a much easier time following the use path on the way down and successfully completed our first scramble. We turned right when we arrived back at the Blue Lake Trail and followed it for a mile to the southern end of Mowich Lake where we could look back across the water to Red Butte. 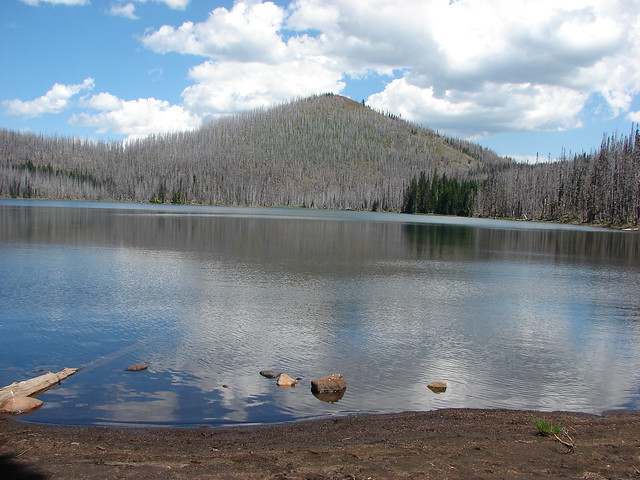 Another 3/4 miles along the trail brought us a junction with the Santiam Lake and Duffy Lake Trails. 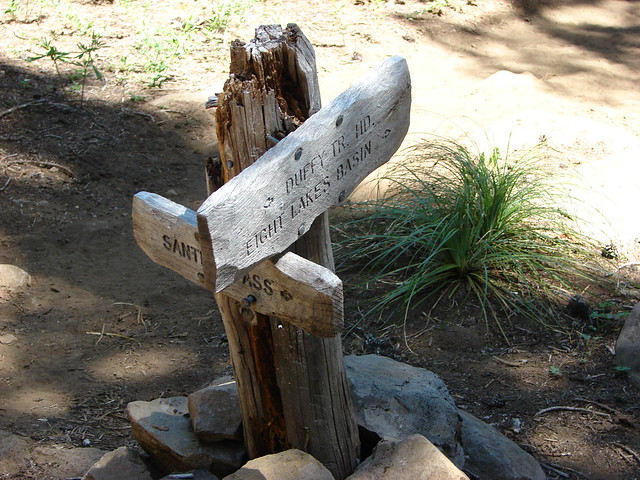 We took a moment to visit Duffy Lake and Duffy Butte. 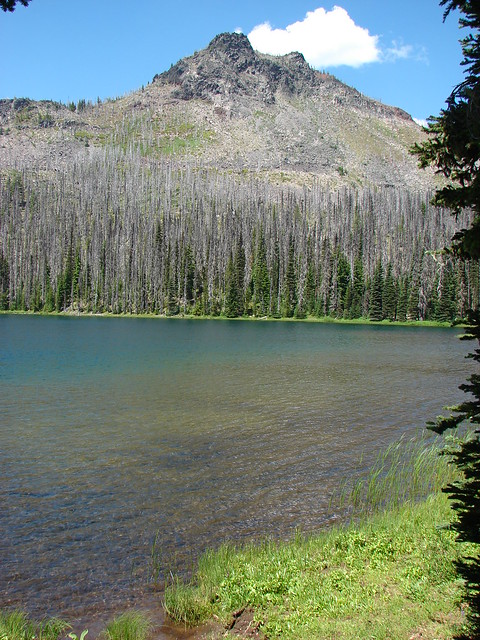 We walked along the lake to its outlet where we picked up the Duffy Lake Trail and headed back toward the trailhead. A nice lollipop loop with a couple of side trips to Santiam Lake and up Red Butte the total distance was a little over 13 miles with approx 2000′ elevation gain. Happy Trails!

Nice trip report. I’m putting that hike on my to-do list when the snow clears.

[…] The Three Sisters and Mt. Washington beyond Red Butte (post) […]

[…] It had been almost 11 years since we visited this lake. On our previous visit we had come up the Santiam Lake Trail from the Duffy Lake Trail (post). […]