On Father’s Day we were joined by our Son, Dominique, on a jaunt to Blue Lake before heading home. Blue Lake is located south of Highway 20, just east of Santiam Pass. Much of the lake is privately owned but the Elliott Corbett Memorial State Park occupies the western end of the lake.

This area burned in the 2003 B & B Complex Fire and we began our hike at a fire interpretive kiosk in a large paved sno-park lot. 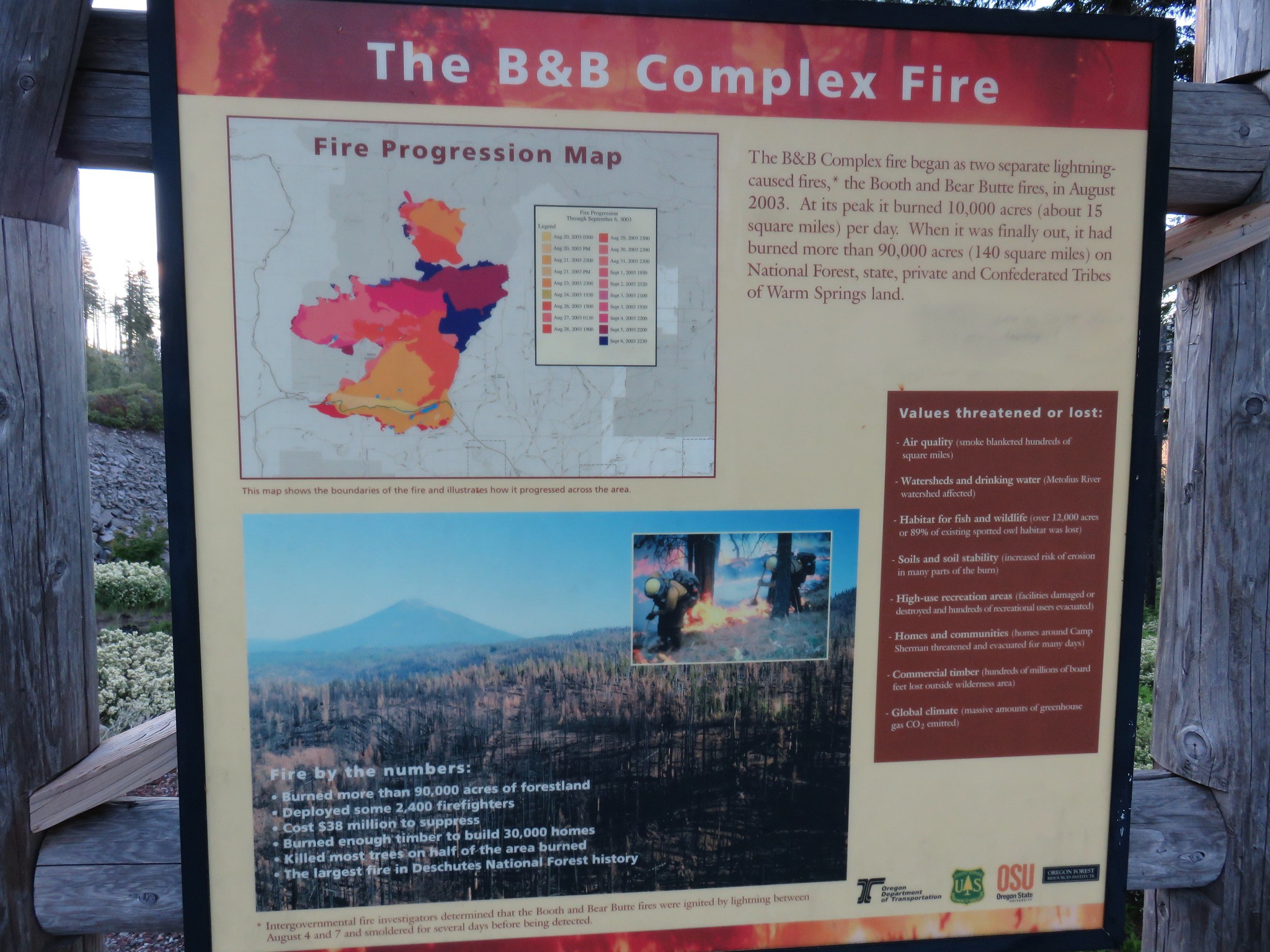 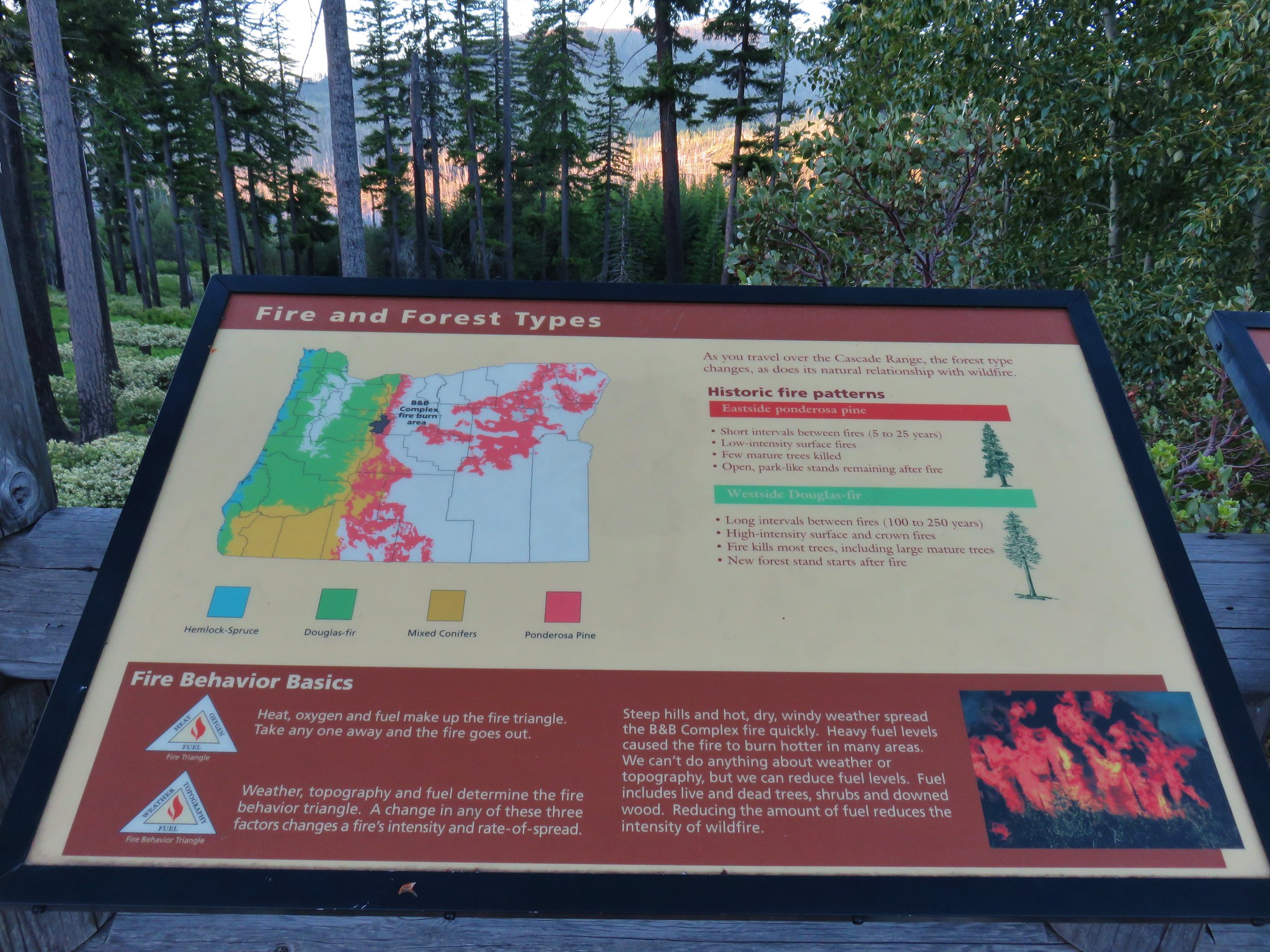 Starting here meant a road walk of 2.5 miles before reaching an actual trail but the description in Matt Reeder’s “101 Hikes in the Majestic Mount Jefferson Reagion” (we highly recommend this guidebook) called the final stretch of road “narrow, brushy, steep, rocky and subject to occasional washouts that turn the road into a series of deep gullies”. Given that the hike would still only be between 7 and 8 miles (and an extra 700′ of elevation gain) by starting here we felt it was worth avoiding any more ugly roads for the weekend.

We walked through the parking area, which had a nice view of Mt. Washington, to FR 2076. 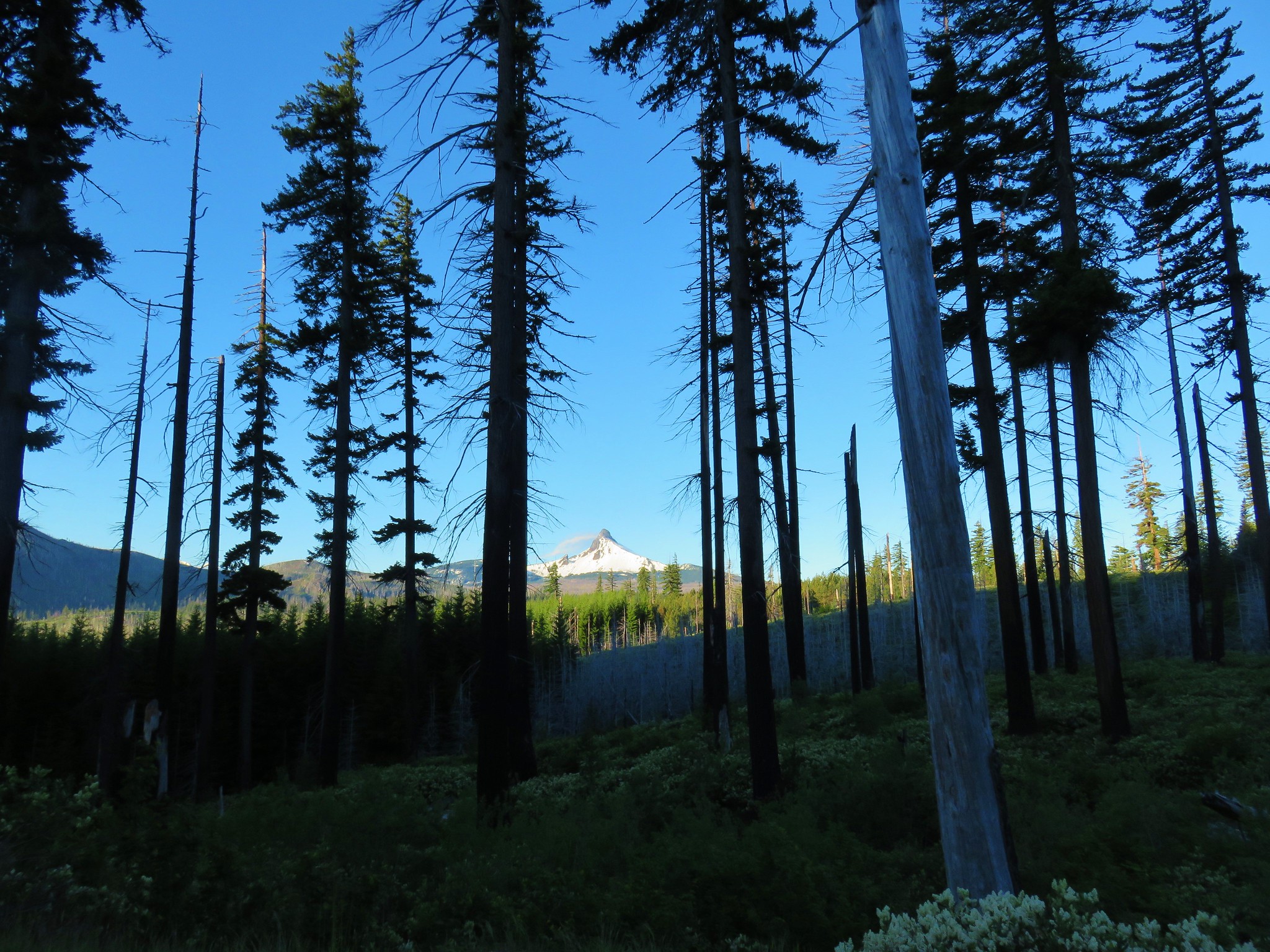 We followed this road downhill. It was a beautiful morning and the view of Mt. Washington was spectacular. 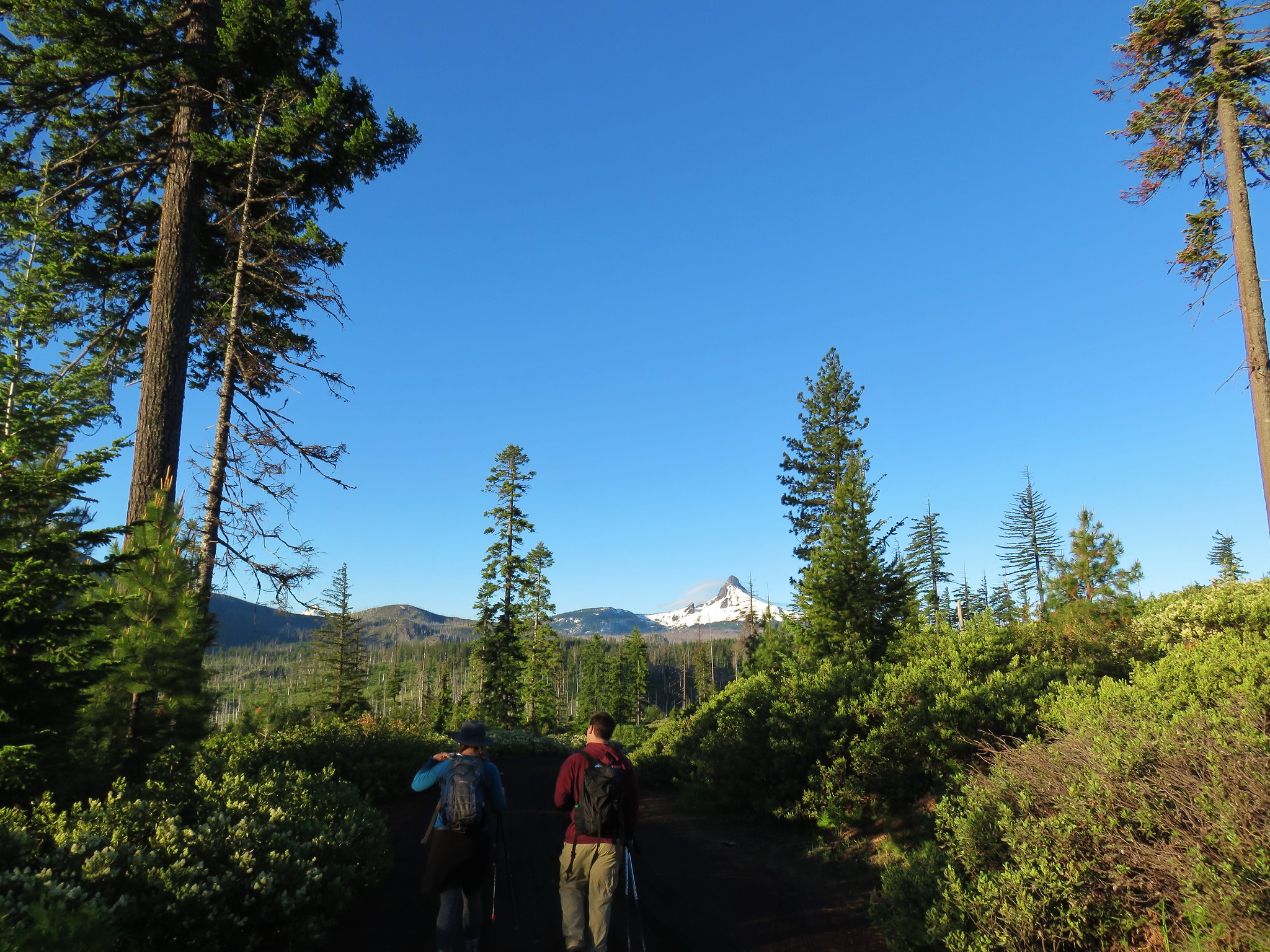 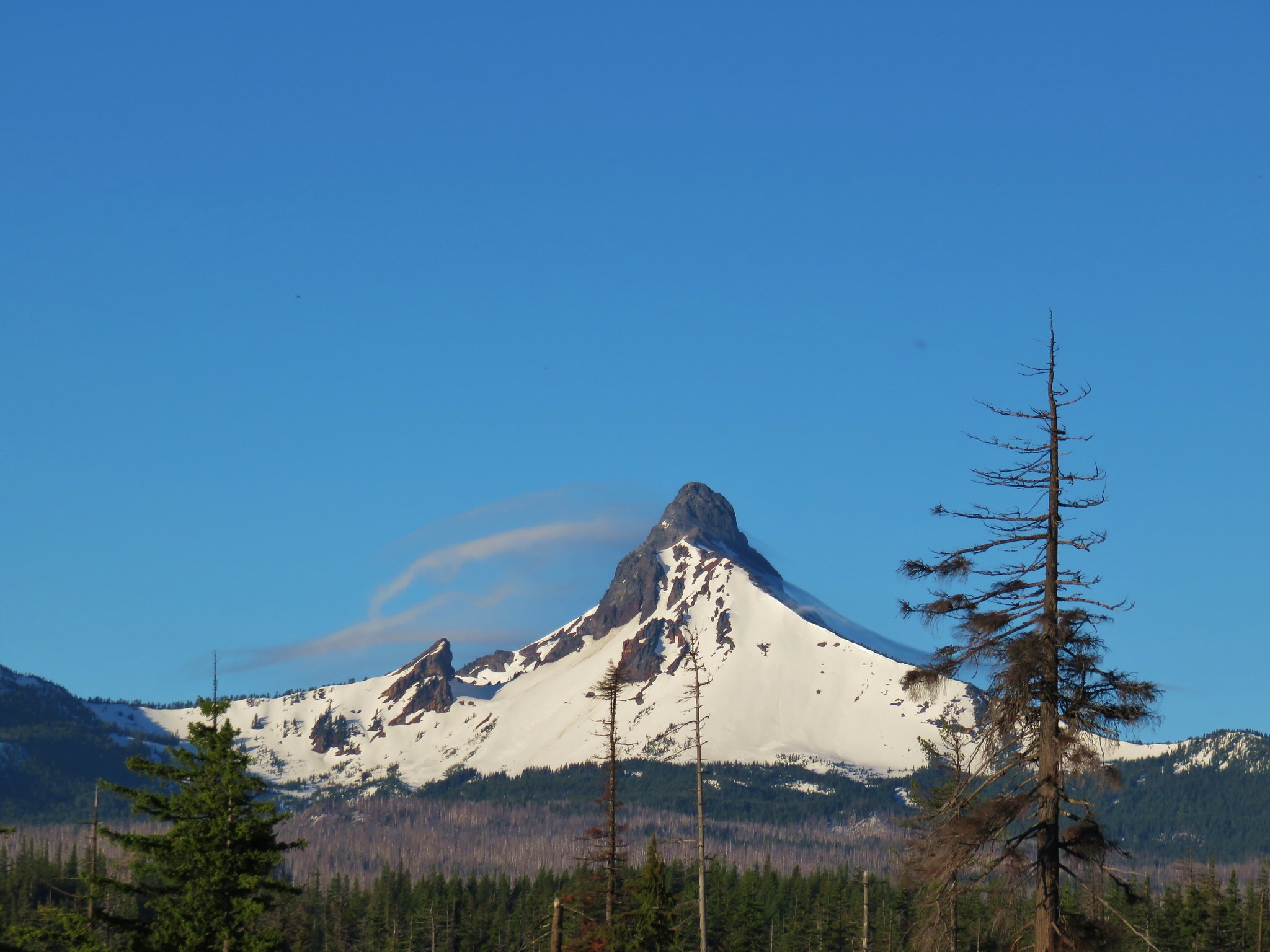 The summits of the North and Middle Sister also made a brief appearance. 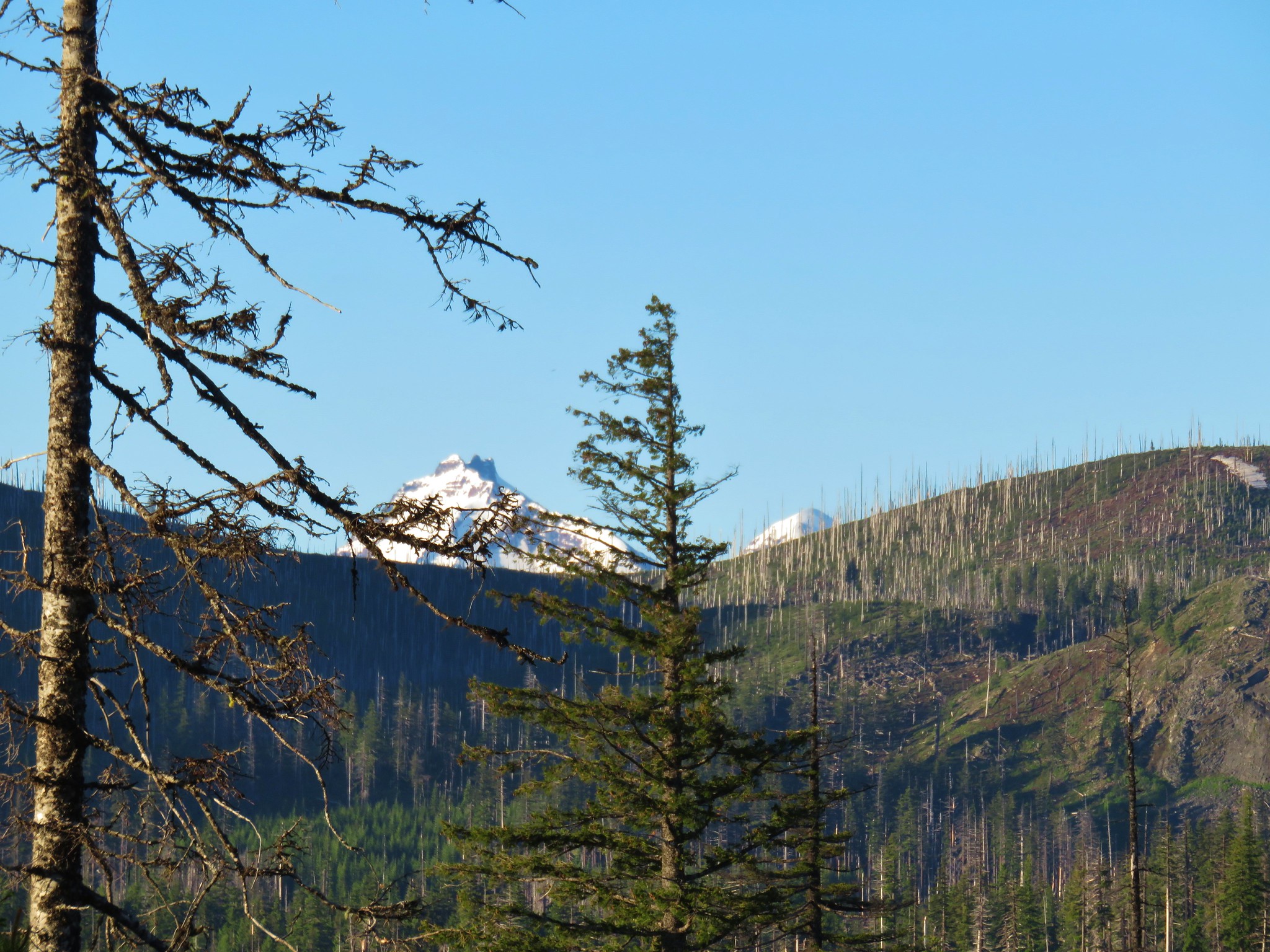 After .7 miles we came to a junction with Road 200 which had a sign warning it wasn’t suitable for trailers. We got ourselves confused here due to not re-reading Matt’s description but instead looking at the topographic image in the entry that showed the lake and trail but not the entire road walk. We should have taken Road 200 here but where the map picked up in the book the track was no longer on Road 200 so we mistakenly thought we needed to stay on FR 2076.

FR 2076 was in fairly good shape and was certainly not steep. It was traversing a hillside south toward Mt. Washington. 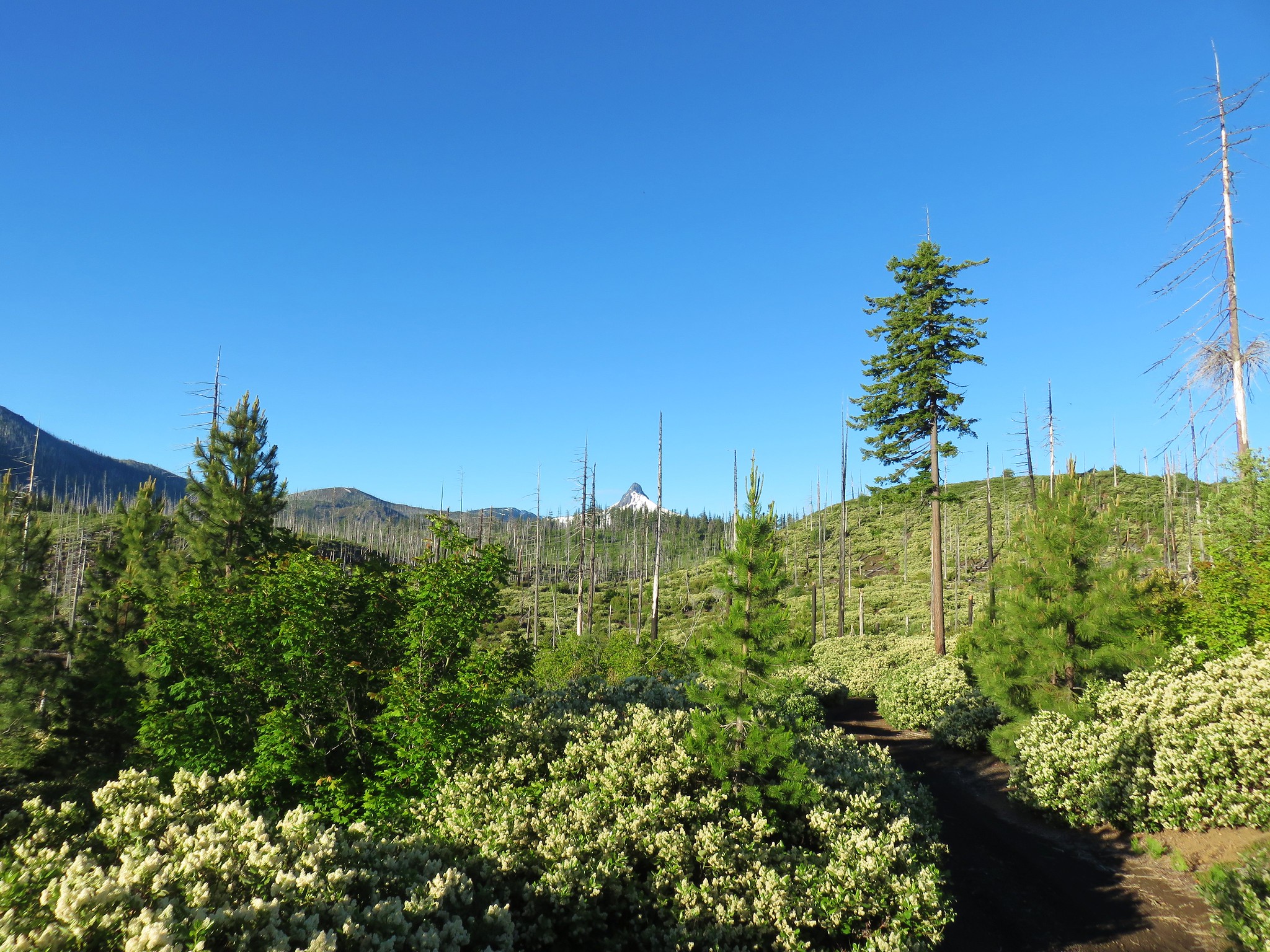 After almost a half mile we knew something was amiss. Looking at the GPS showed we were indeed heading for a lake but it was Island Lake dead ahead not Blue Lake. We pulled the book out and read the directions and realized our mistake. We backtracked to Road 200 and once again headed downhill.

Road 200 was not great, and maybe the previous days short but horrific section of Forest Road 2630 in the Ochocos unduly influenced us, but most high clearance vehicles would probably be fine. Although, meeting a vehicle going the other way would be tricky as there weren’t many wide spots.

Walking the road had its advantages though. In addition to the mountain views were wildflowers including a surprising group of rhododendron. 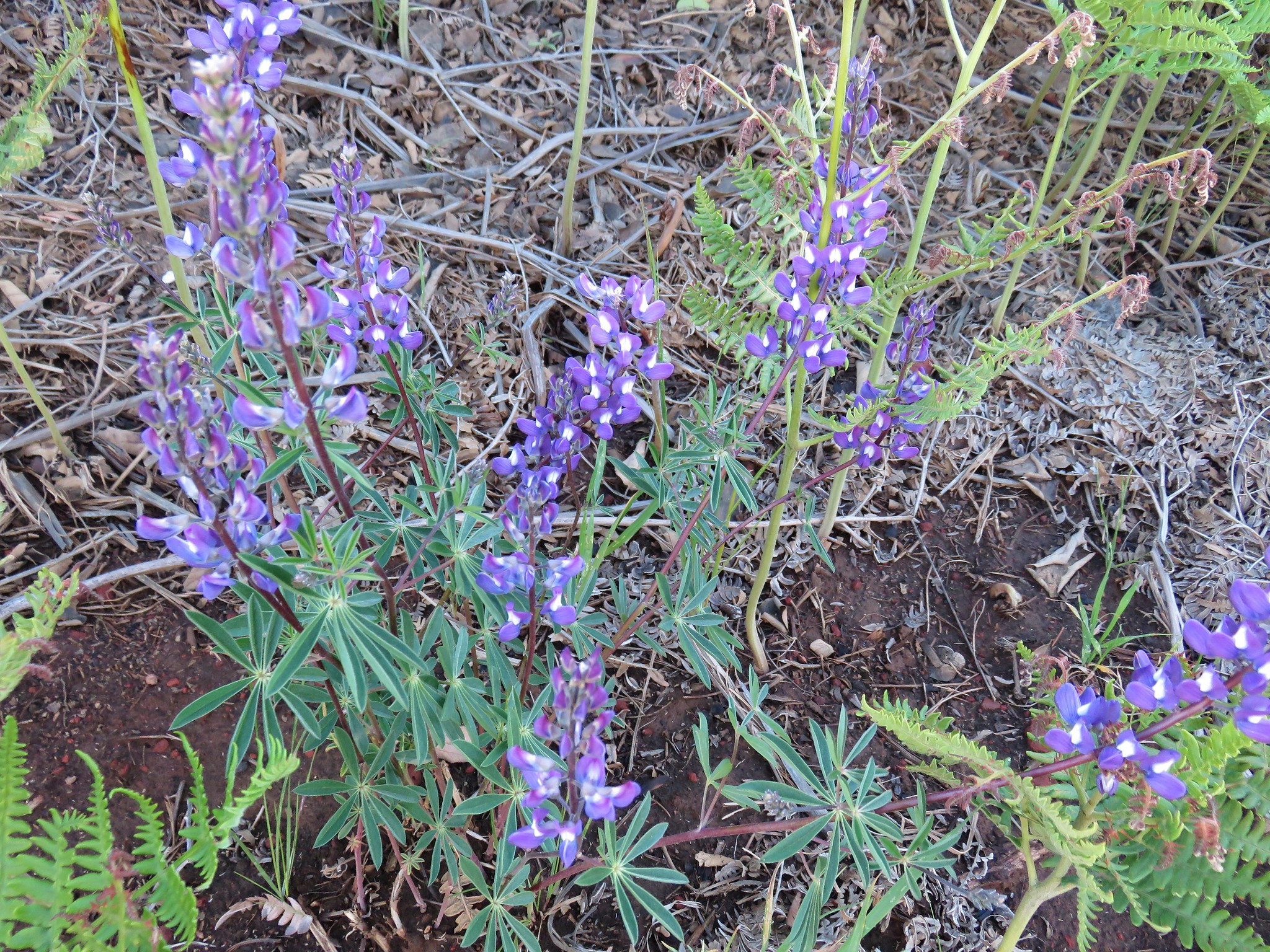 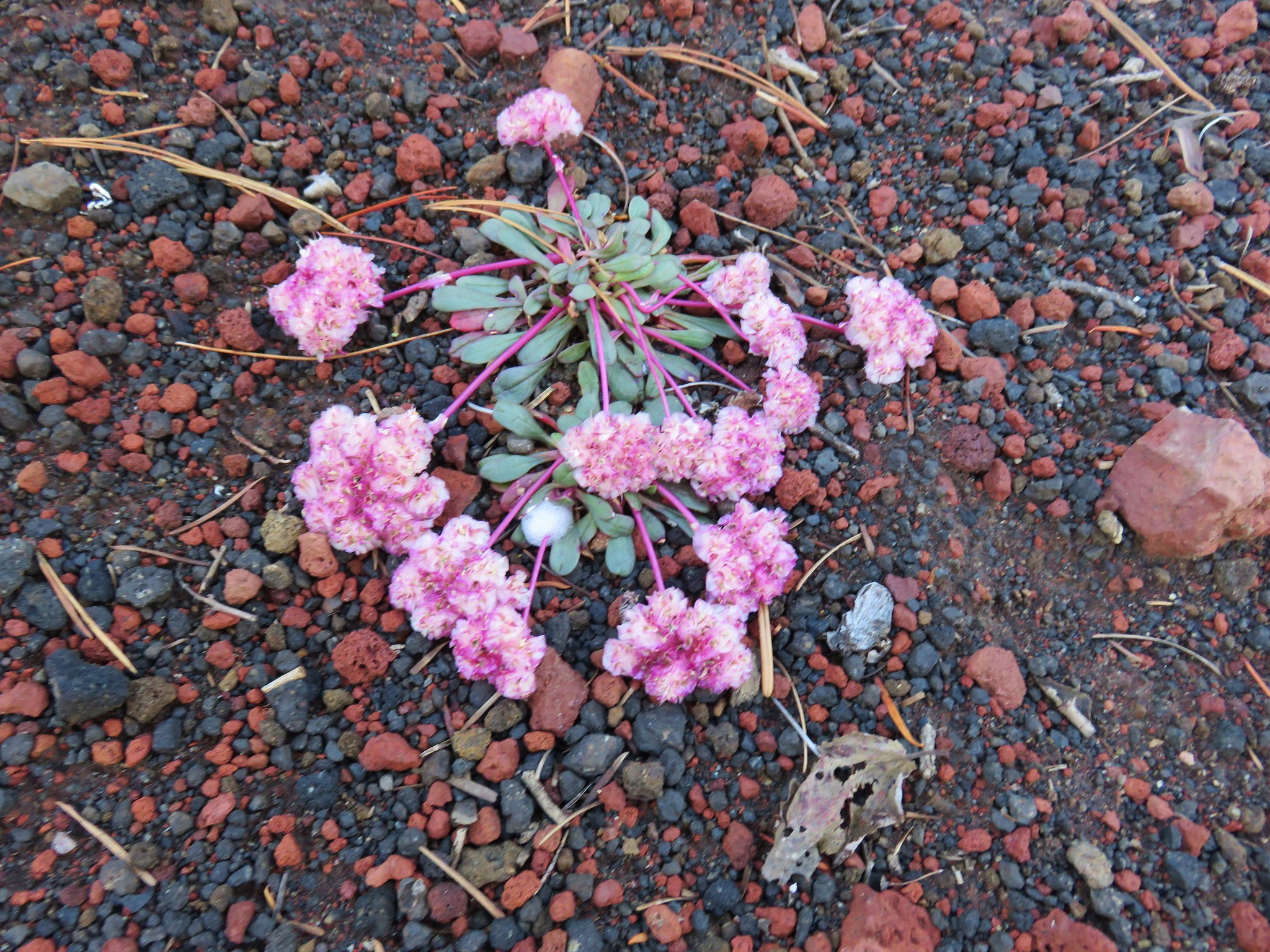 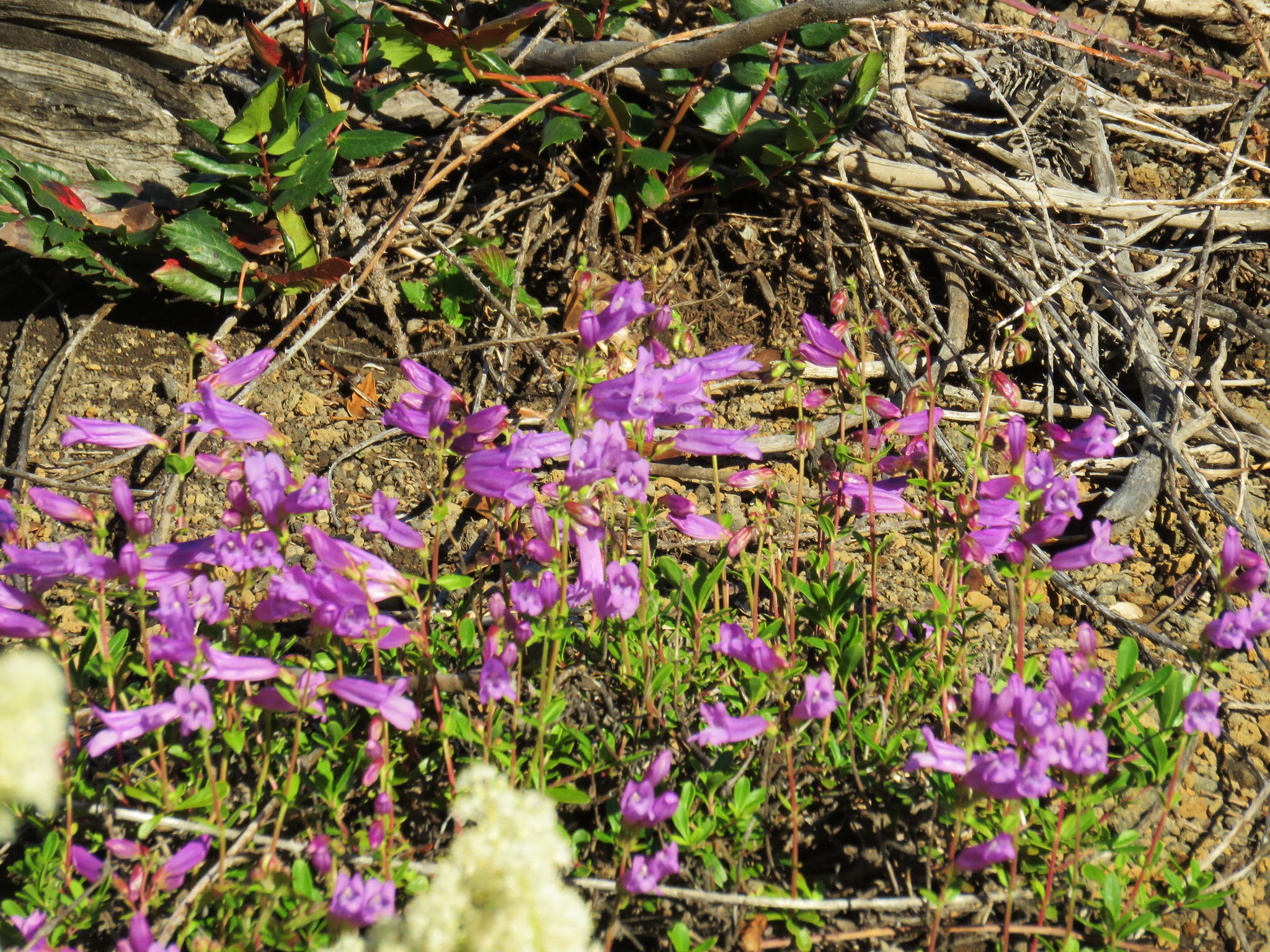 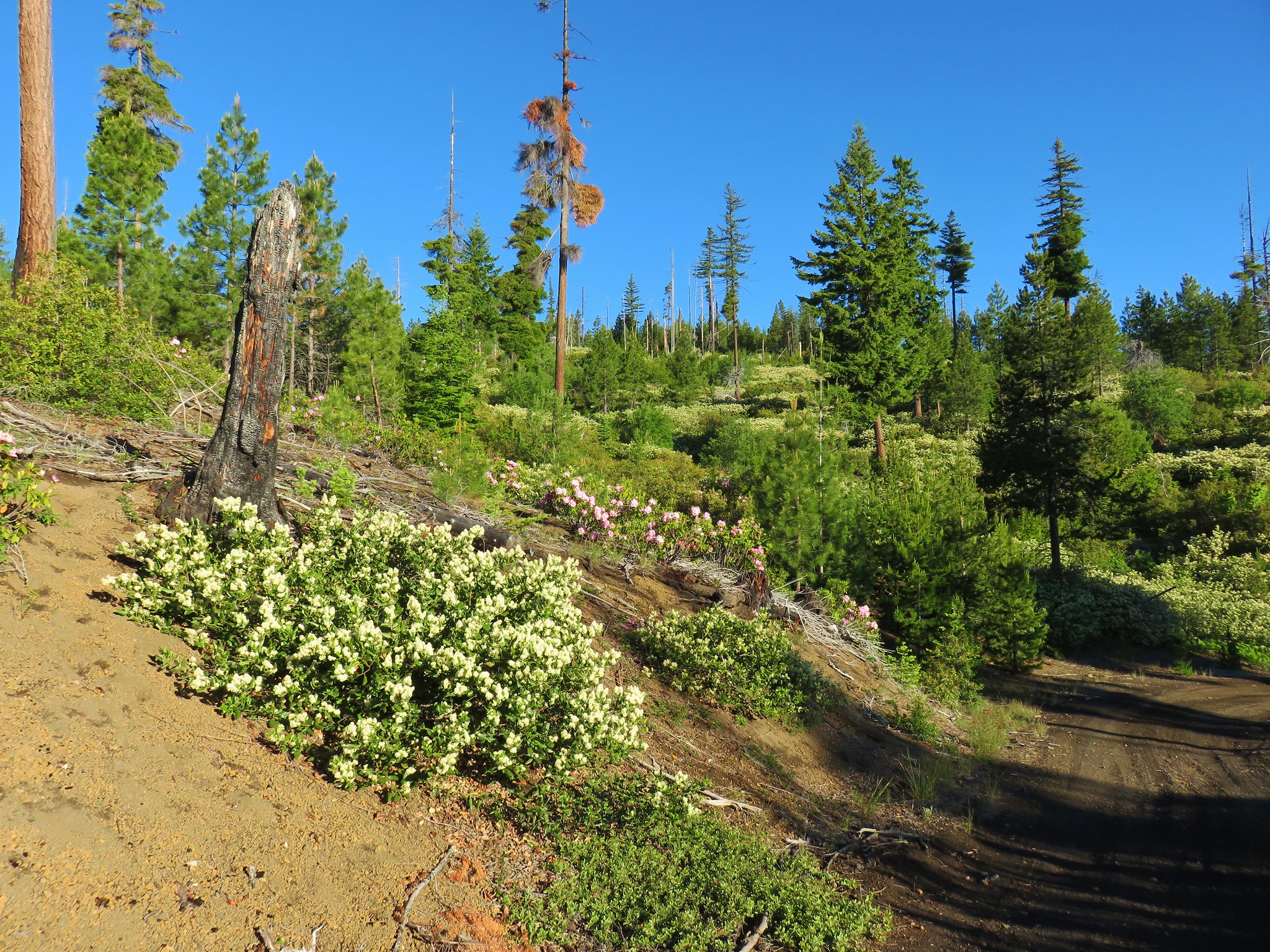 The rhododendron were upstaged by a nice buck with velvet antlers which Dominique spotted. 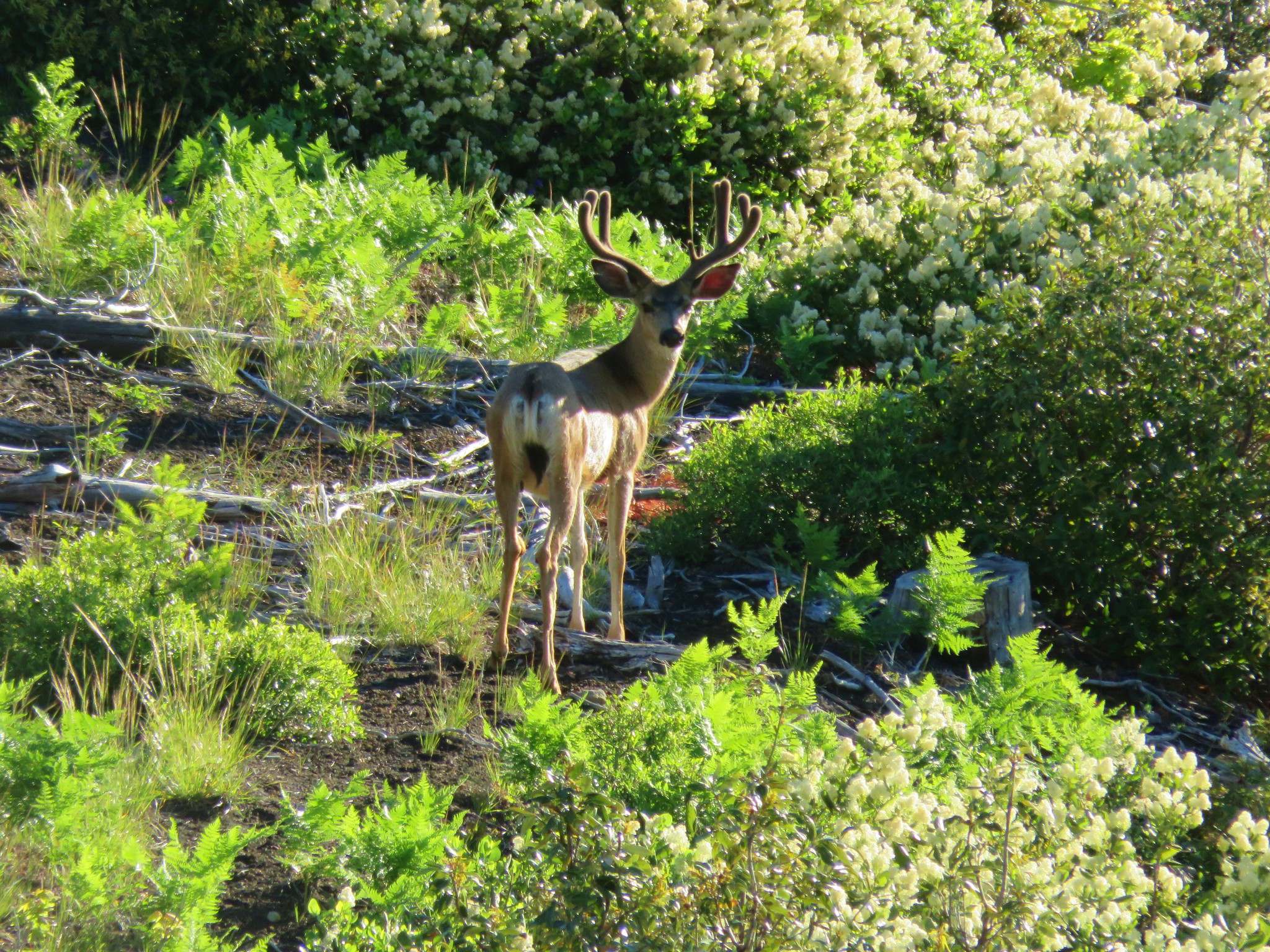 We took our second wrong turn 1.5 miles down Road 200 when we forked right on Road 200 when we should have stayed straight at what appeared to be a pile of rocks. We’d only gone a tenth of a mile when we caught this one and headed back to the rocks to find a road continuing on the other side. Another .4 miles brought us to a parking turnaround. Here we ignored an obvious trail straight up a hill and took a faint path to the left. 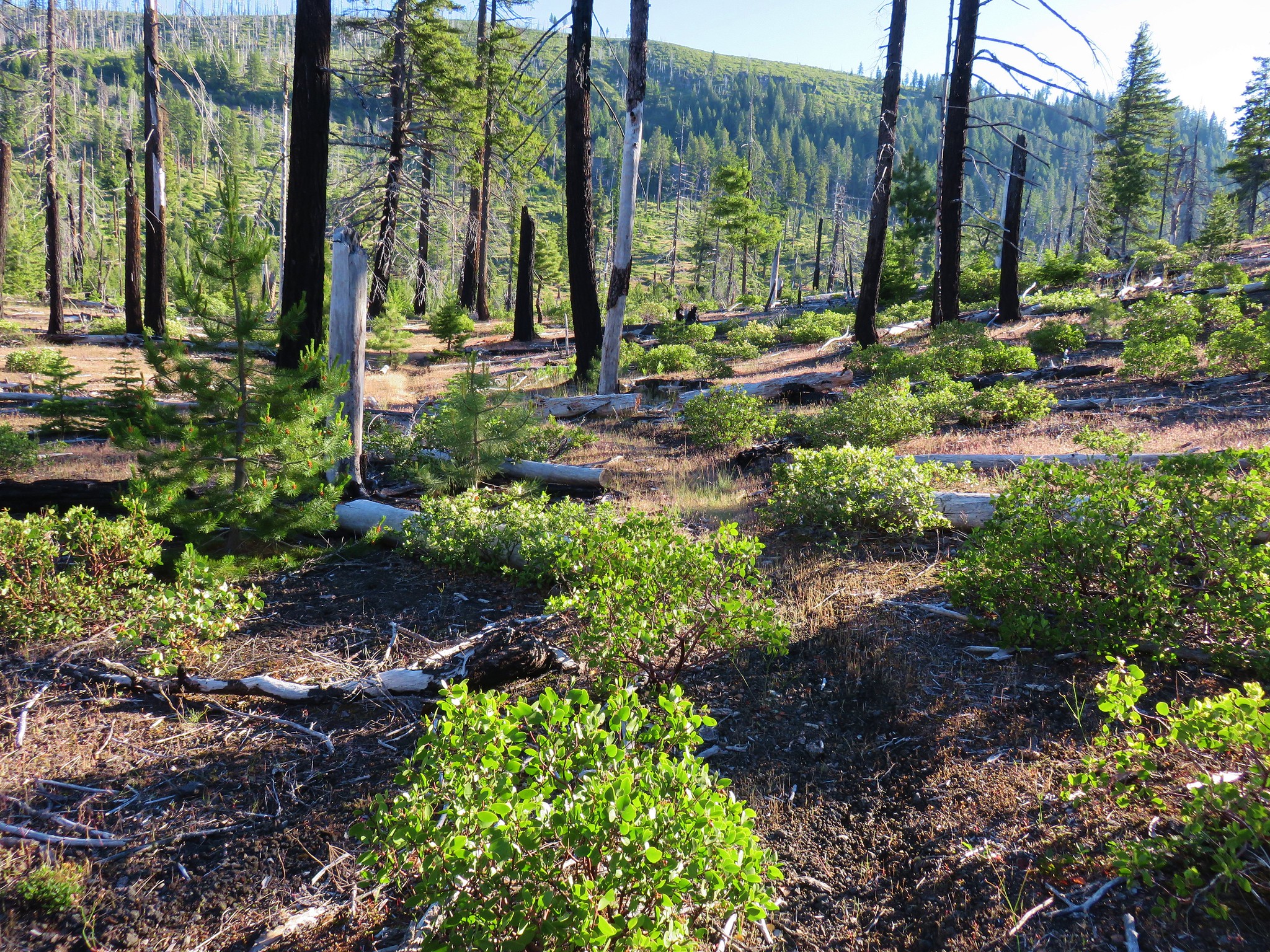 This path began to climb up a ridge to a sign announcing the end of the Blue Lake Nordic Trail. 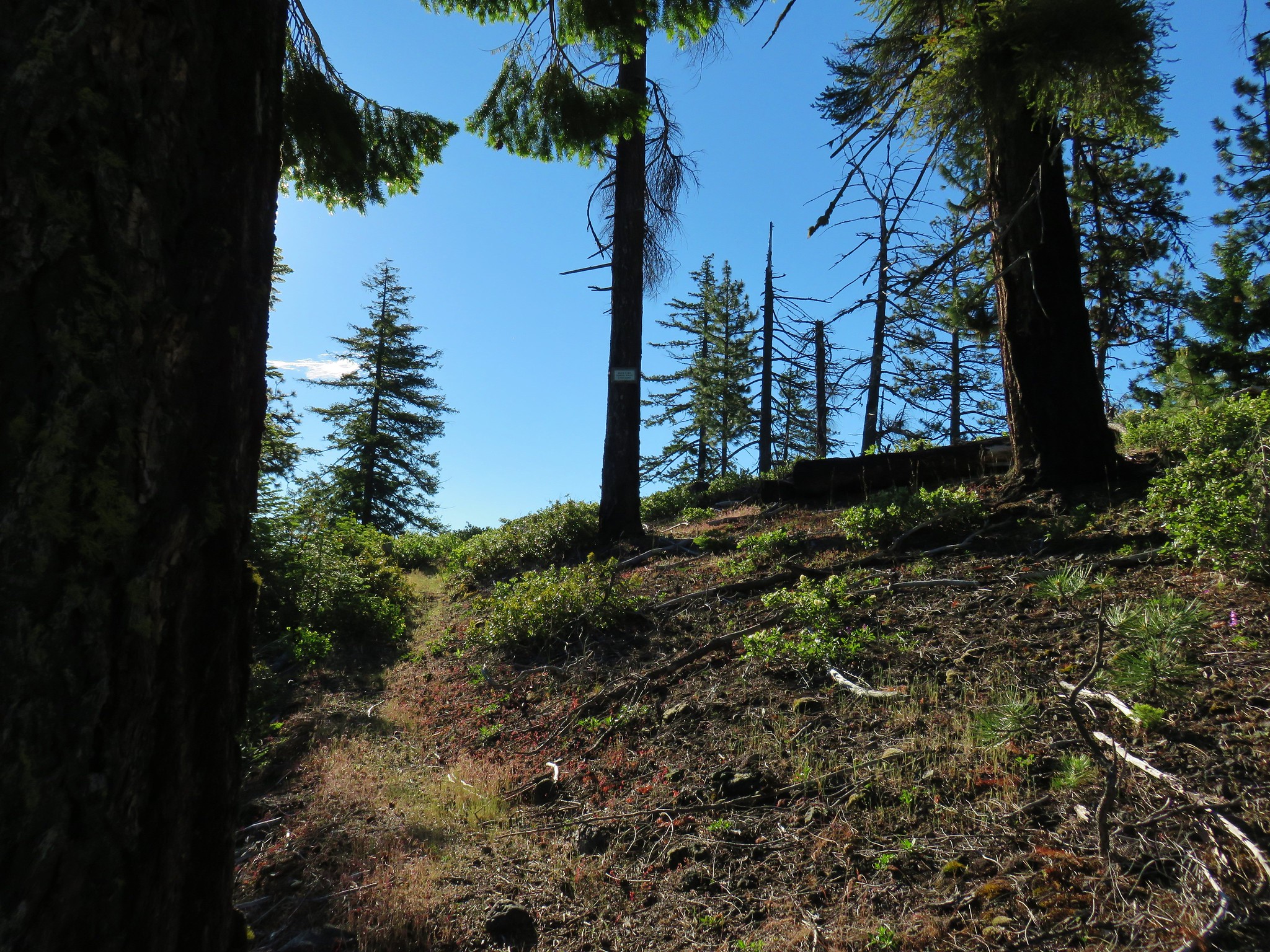 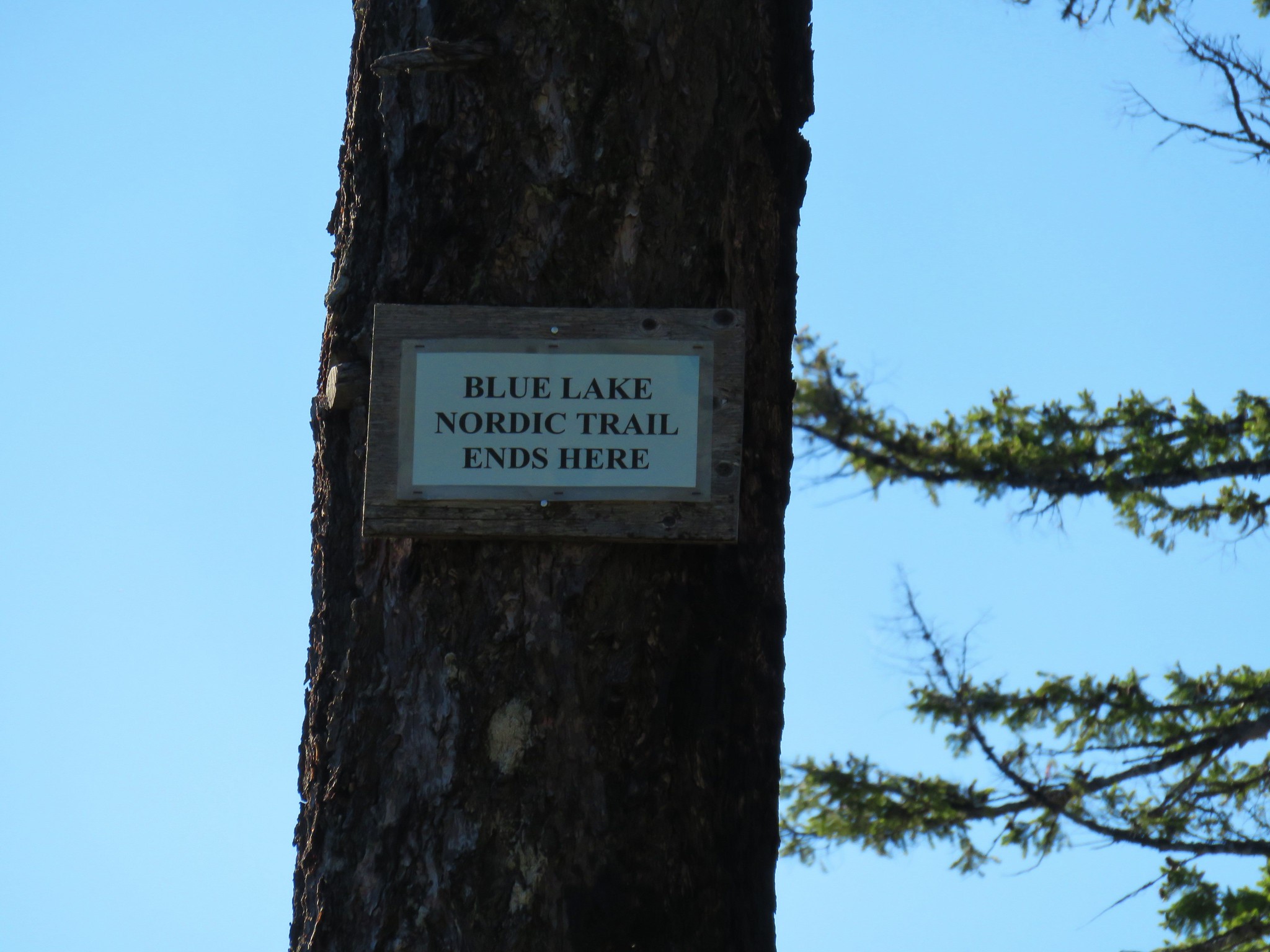 Once we gained the ridge we had a view of Blue Lake below and Suttle Lake a little further to the east. 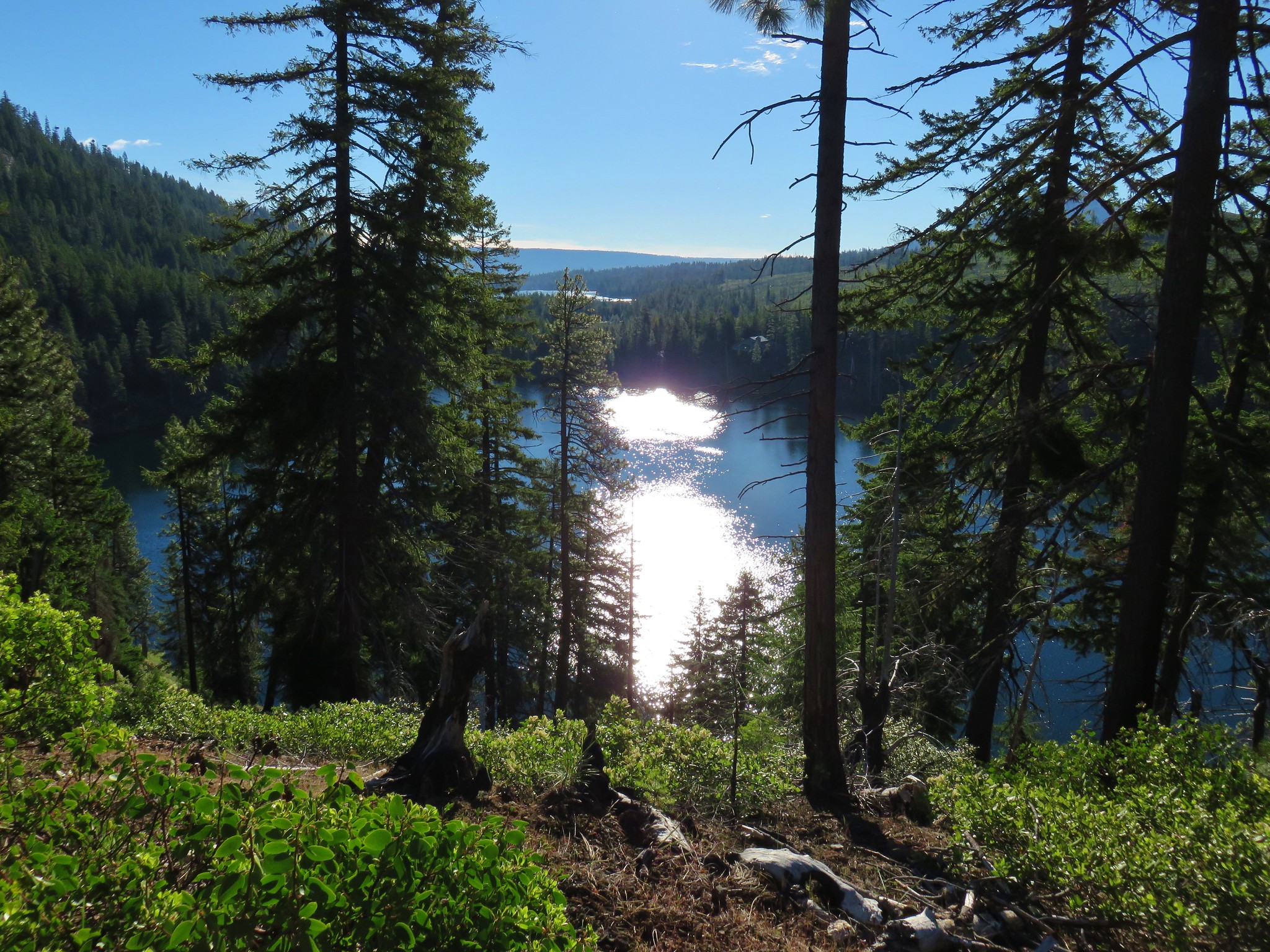 Blue Lake fills a collapsed cladera to a depth over 300 feet. The trail followed the ridge along the western end of the lake. We followed it around to a knoll described in the guidebook as the start of private land. 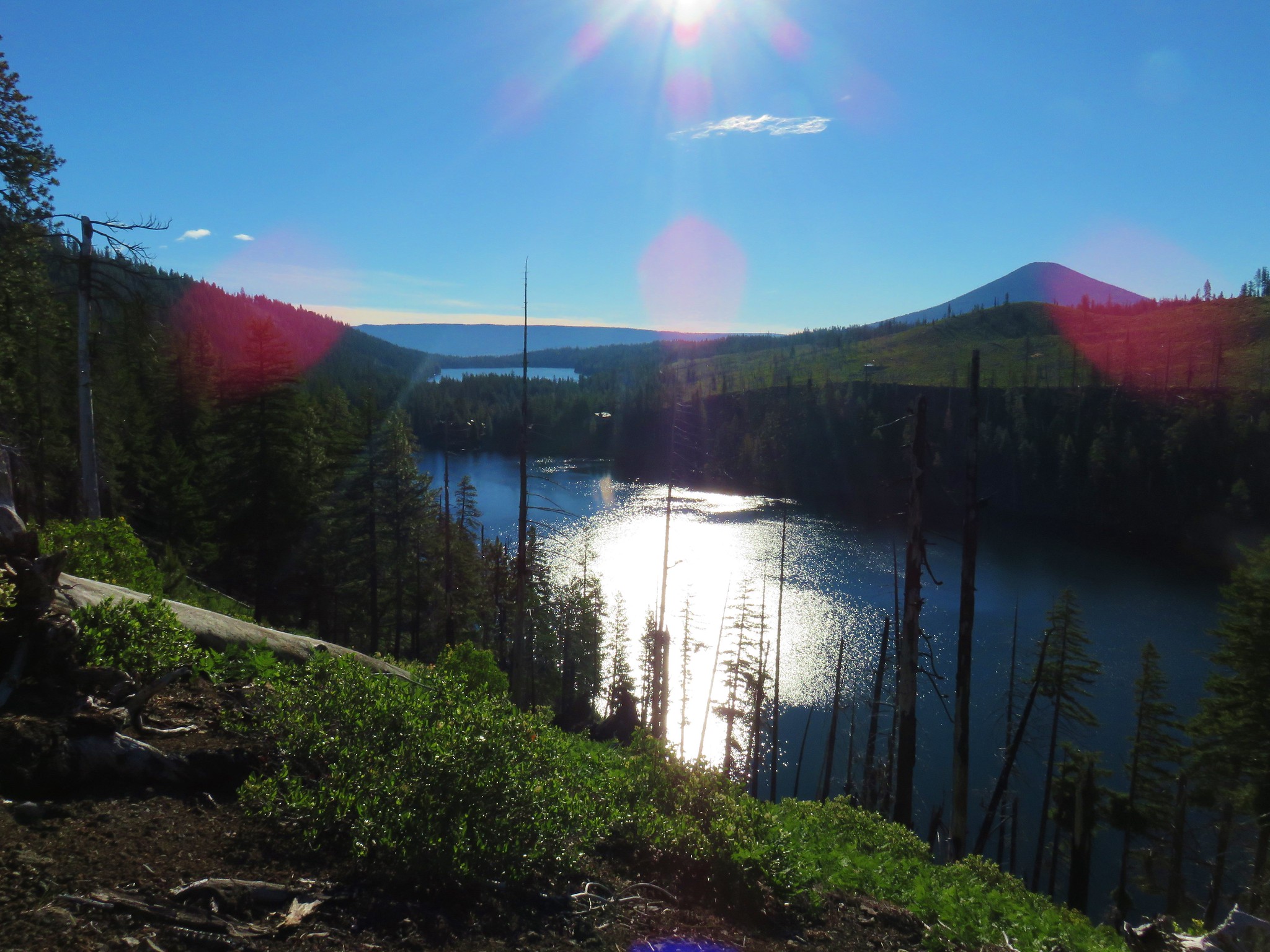 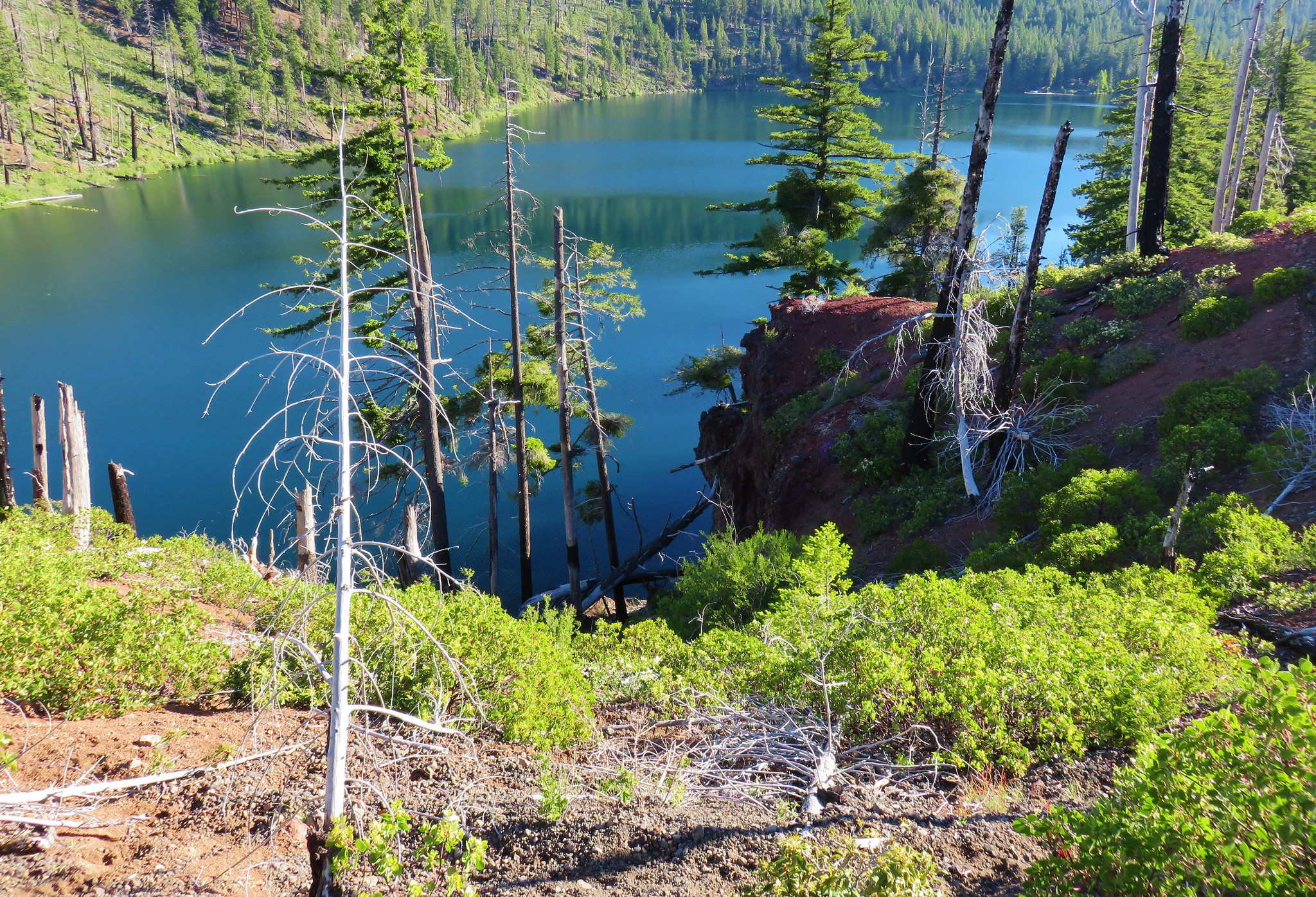 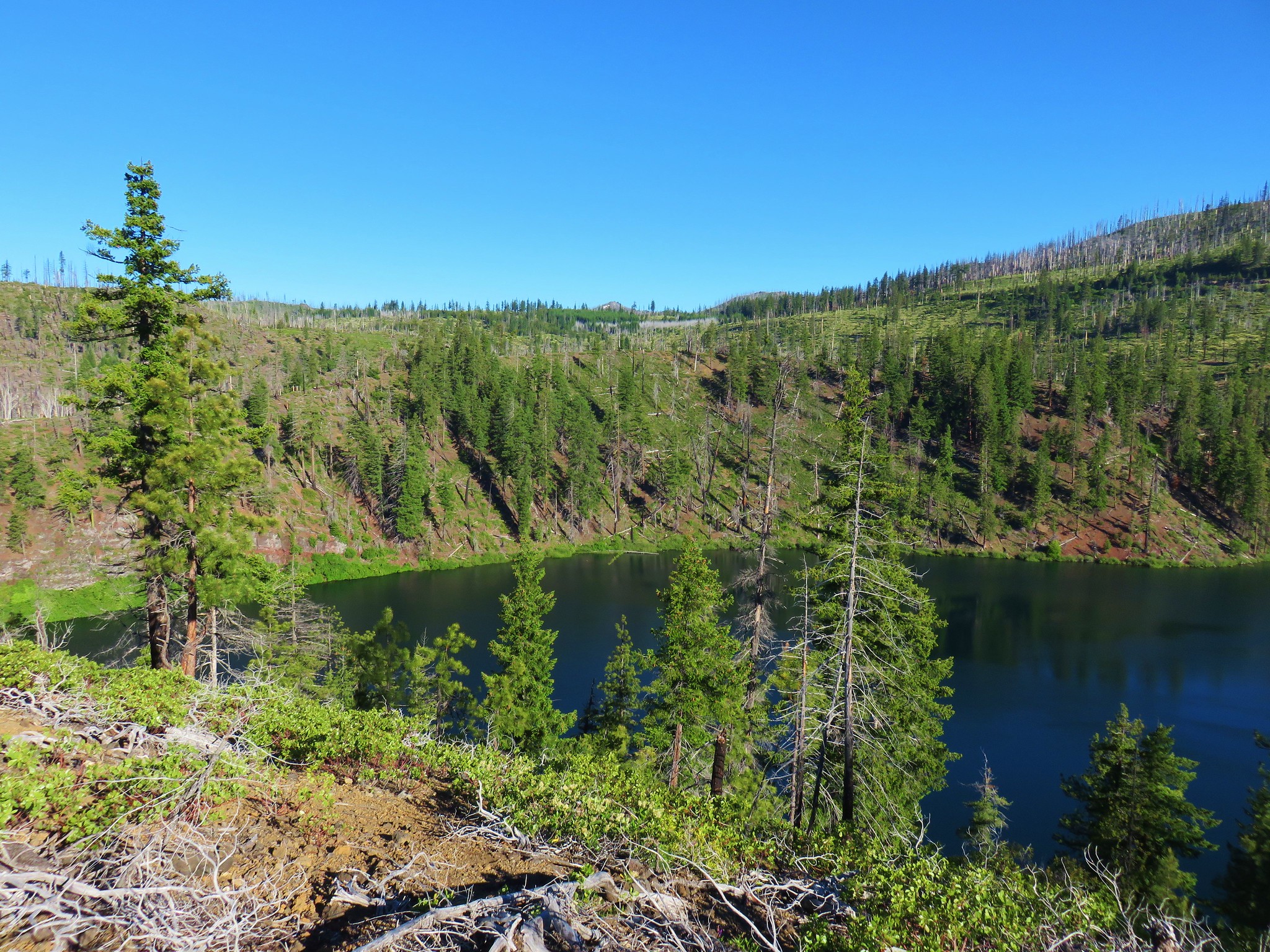 Opposite the lake, on the other side of the ridge, lay a meadow with Mt. Washington looming behind. 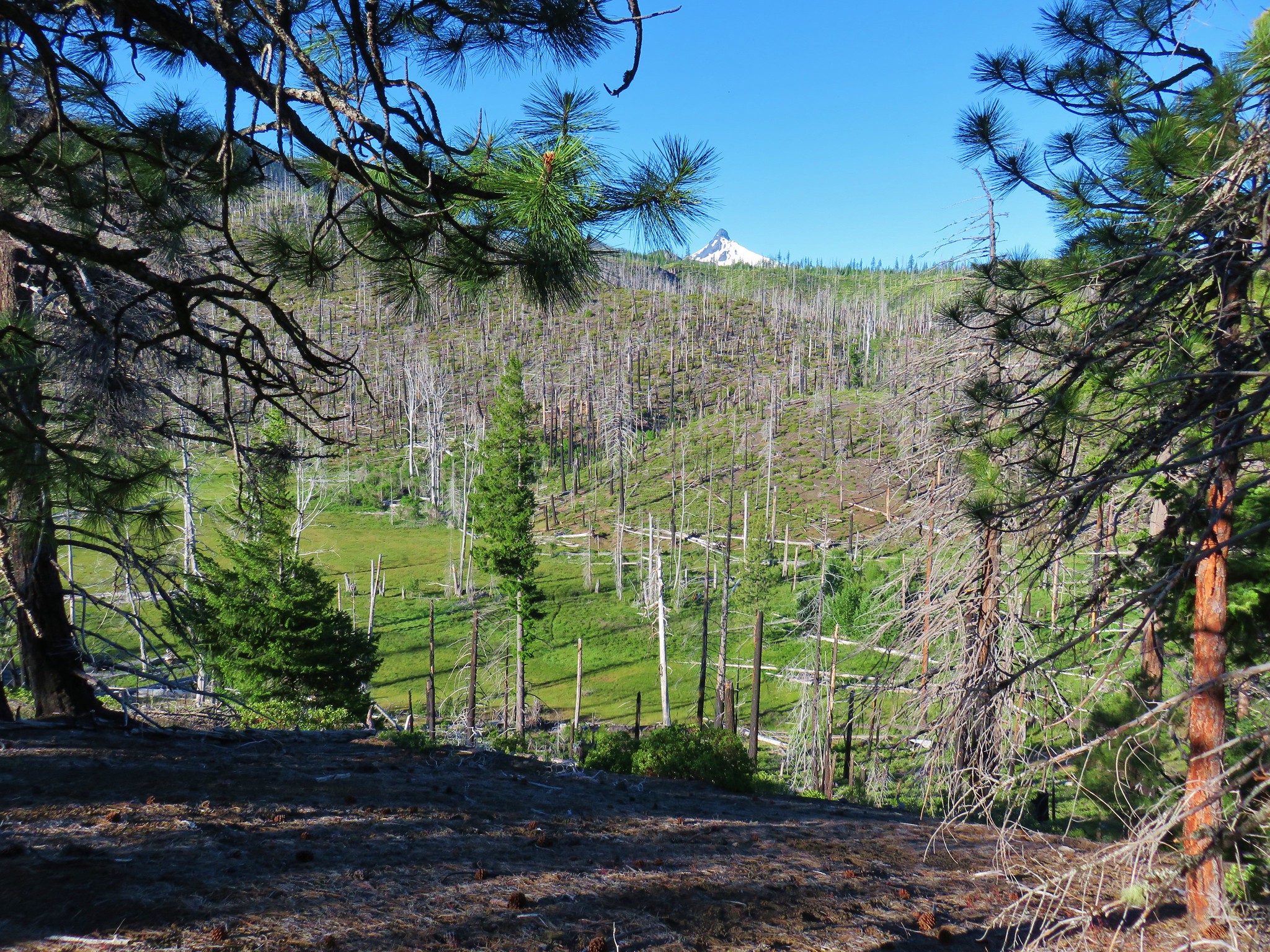 In addition, the seasonal Cache Falls could be seen flowing down the hillside below hidden Cache Lake. 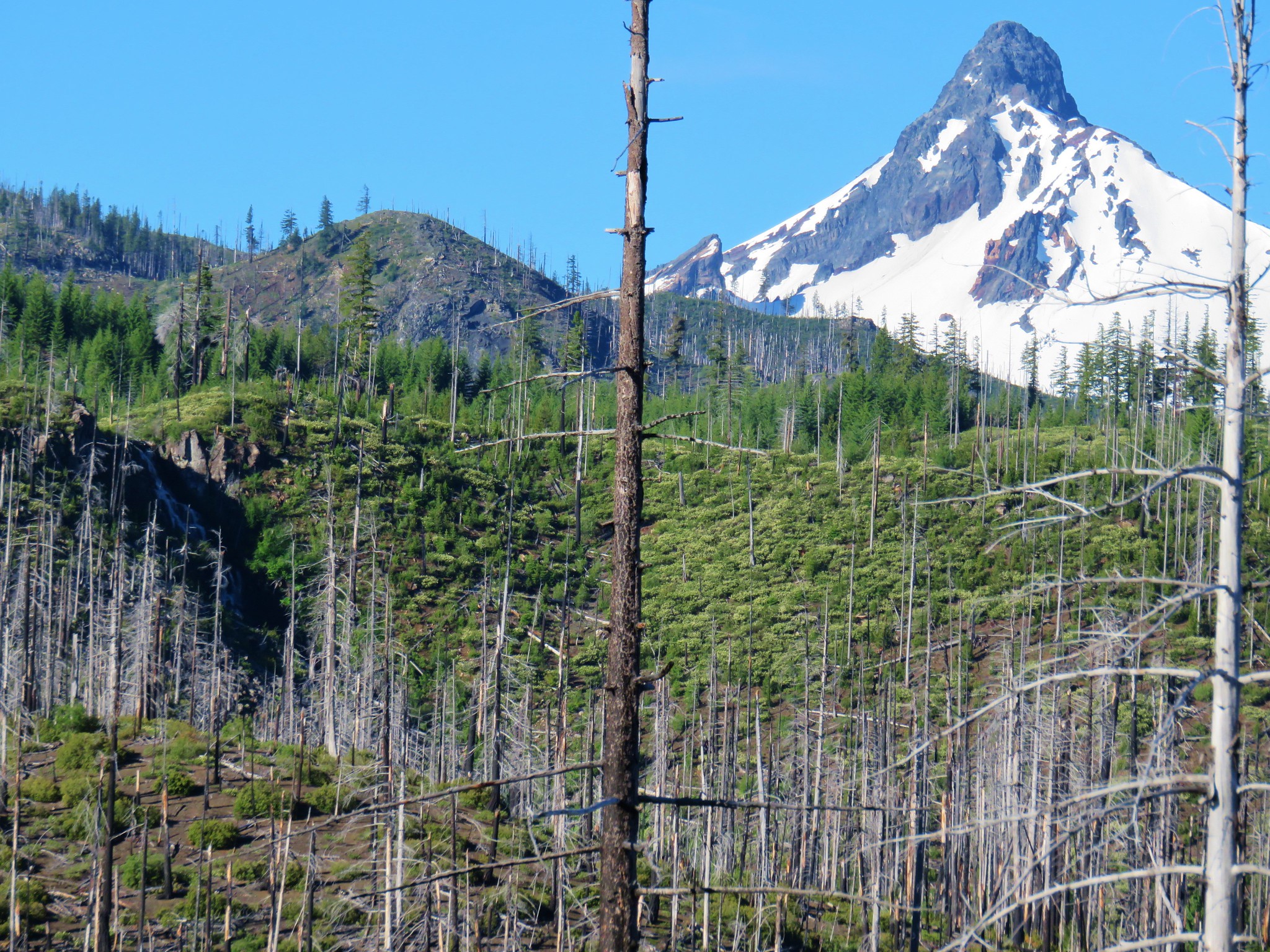 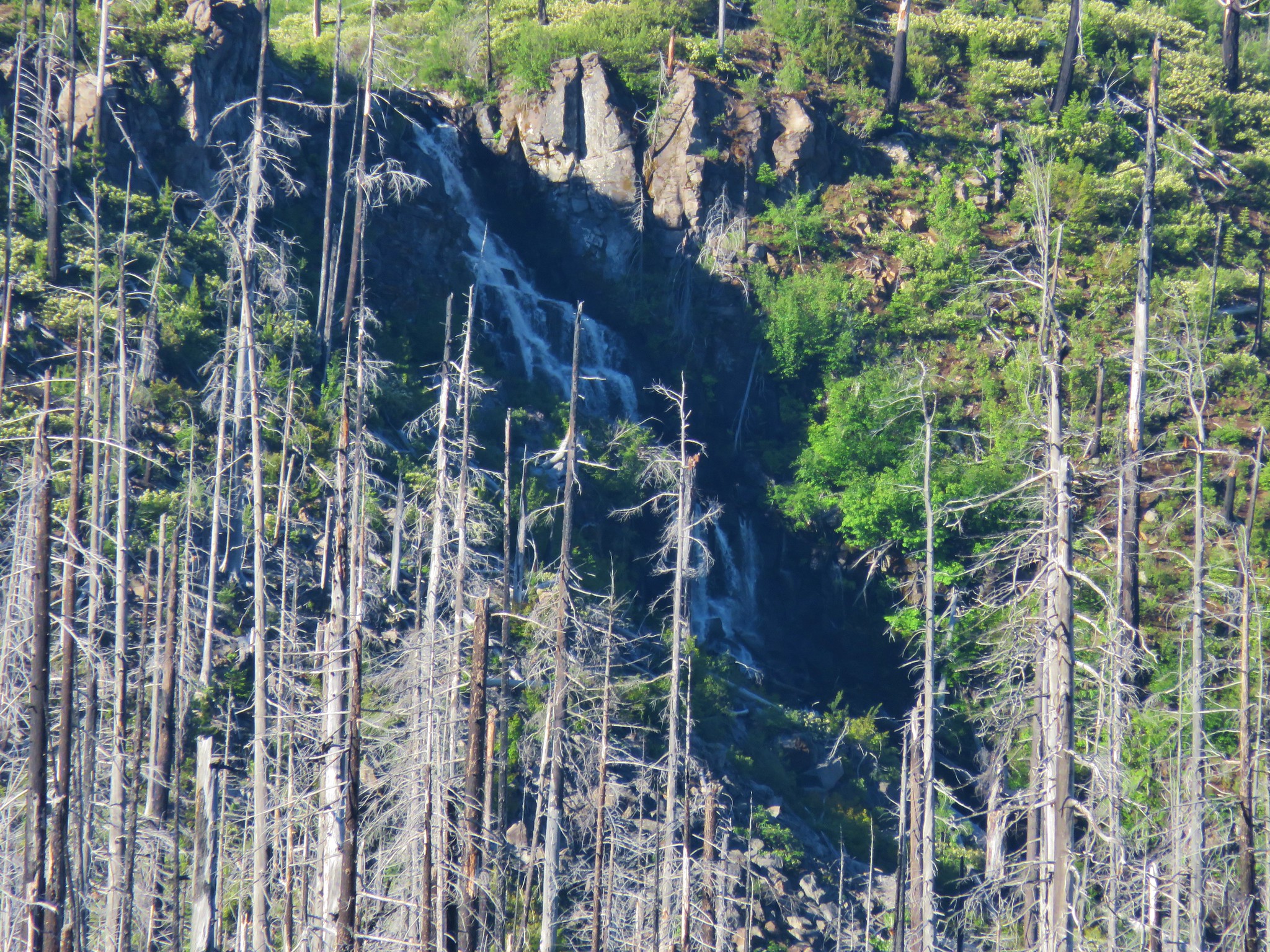 After visiting the knoll we backtracked a tenth of a mile along the ridge then headed downhill on a faint path heading toward what appeared to be an old road bed. There was a bit of maneuvering around blowdown to get to the road bed where we discovered a clearer path coming down from a point further along the ridge. Here was also the memorial plaque for the Elliott R. Corbett II Memorial State Park. 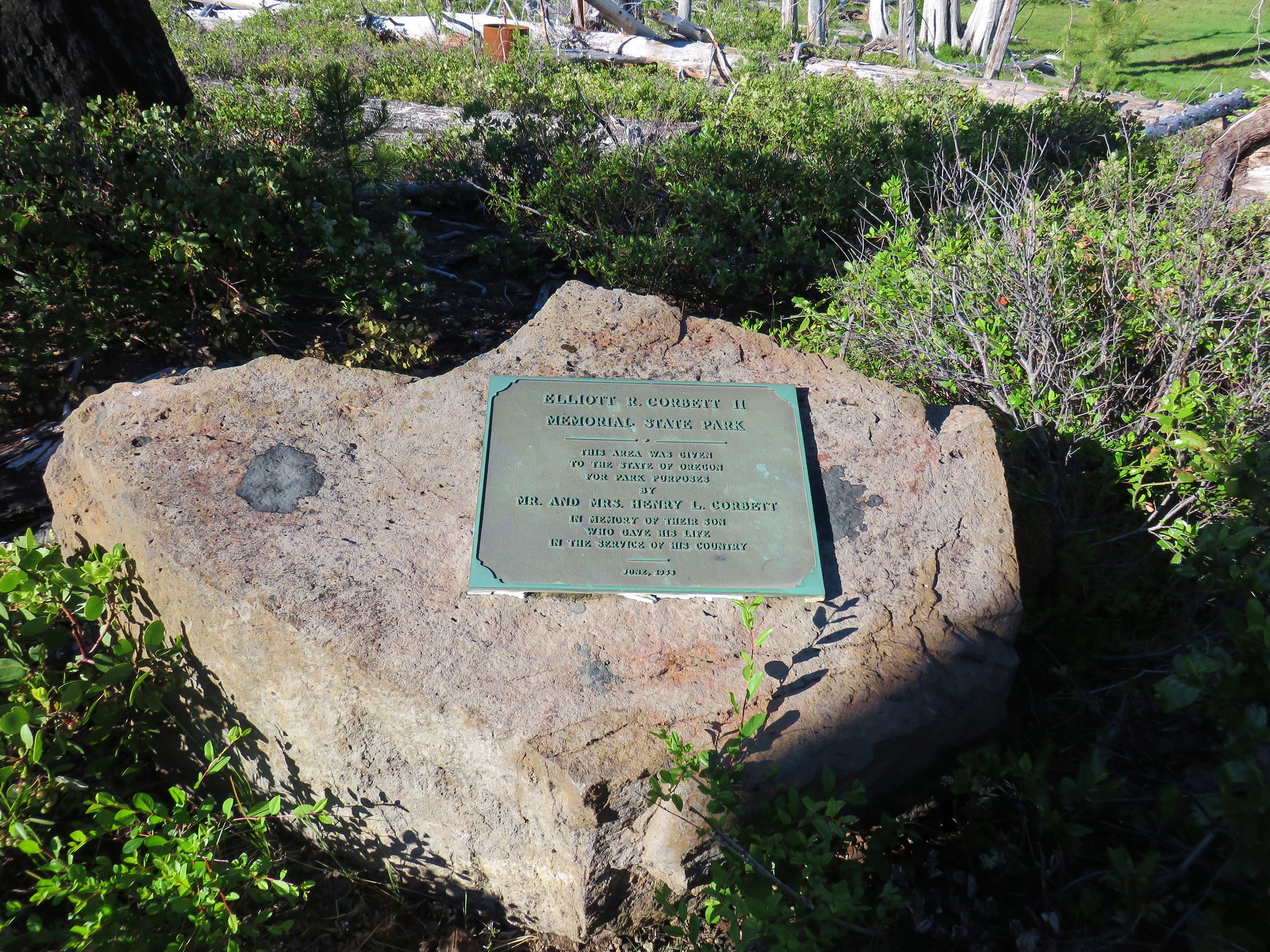 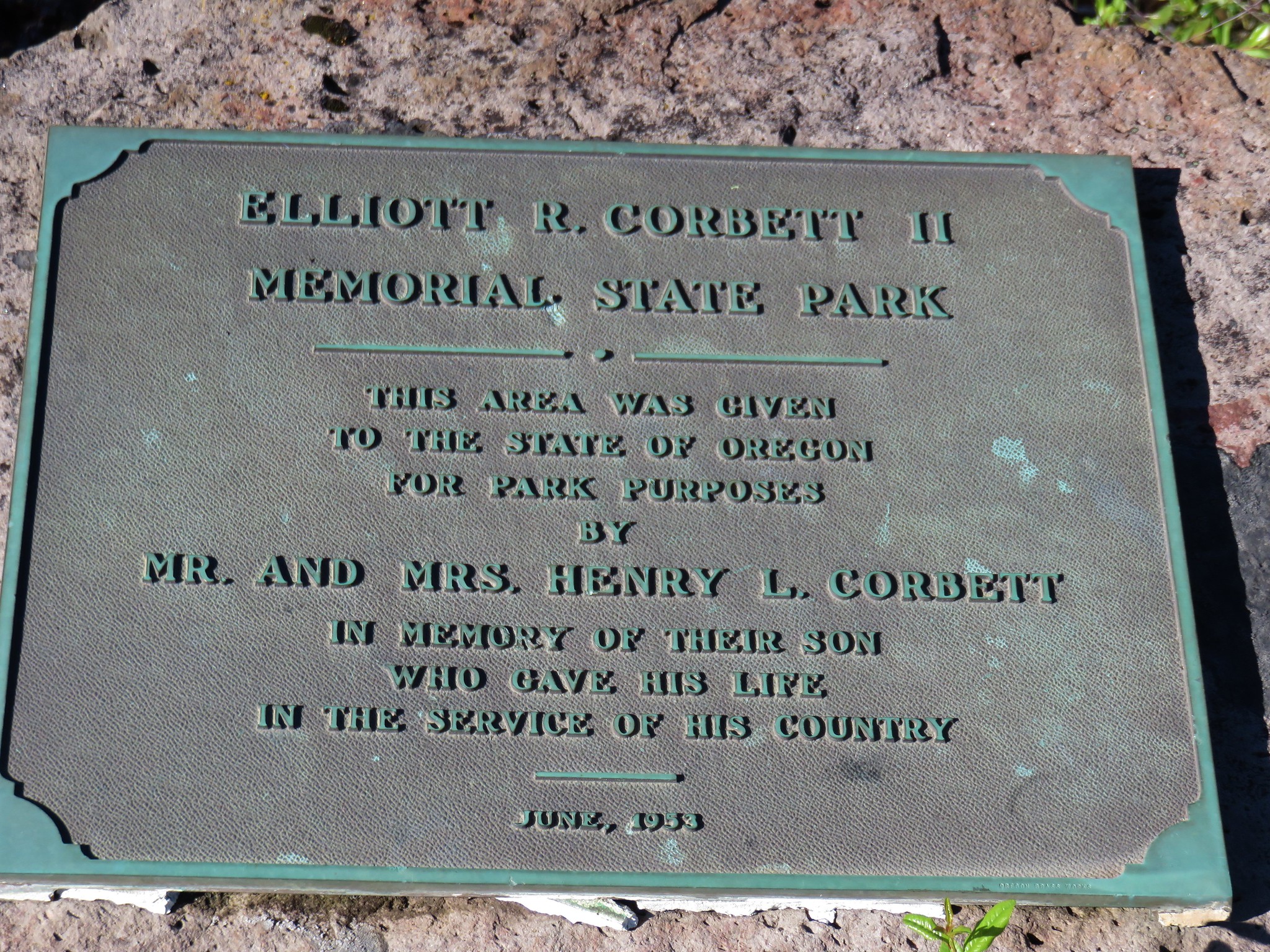 The trail led into and through the meadow before arriving back at the turnaround at the end of the road walk. 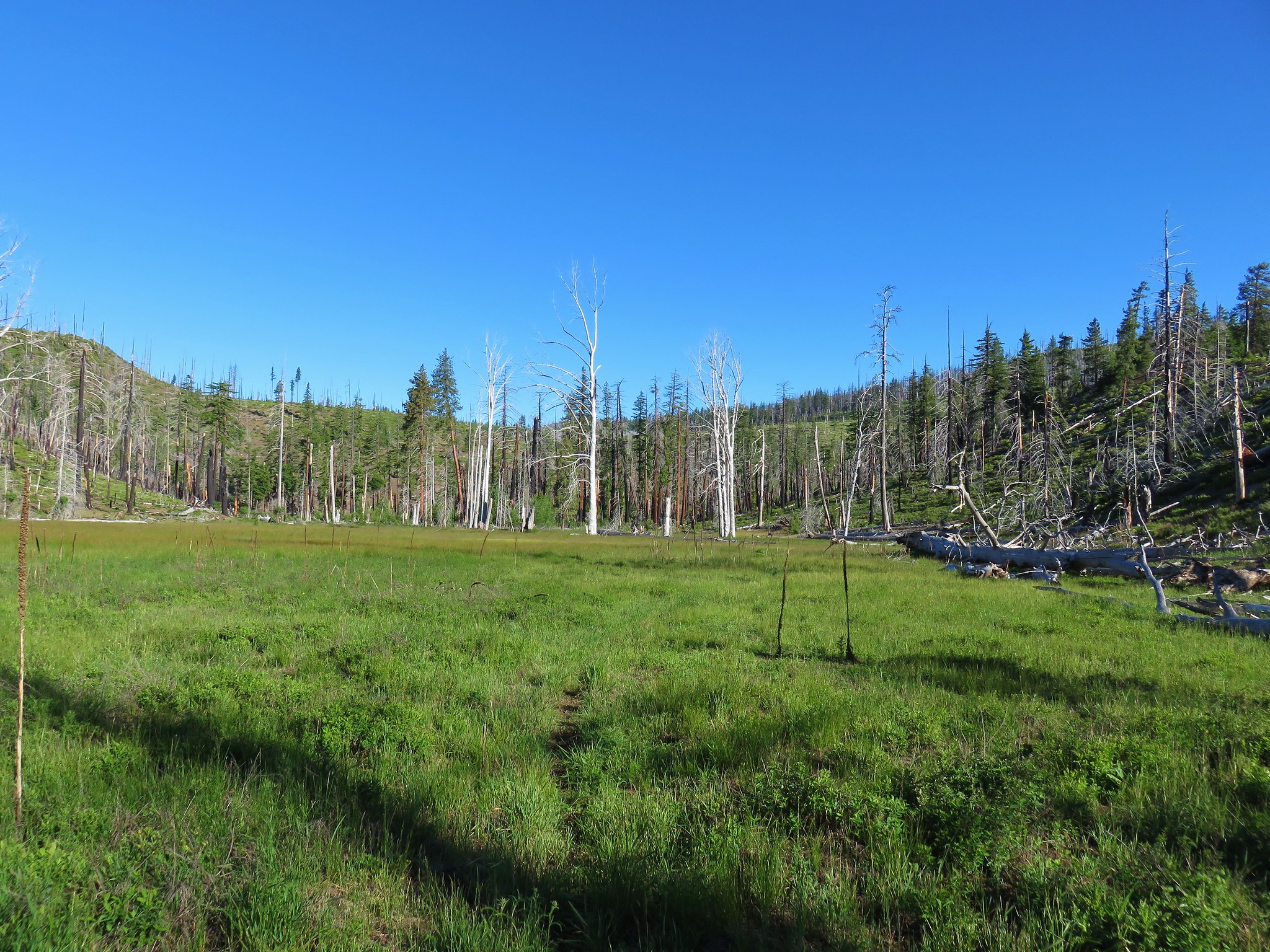 On the way back up we spotted a toad and a frog along the roads. 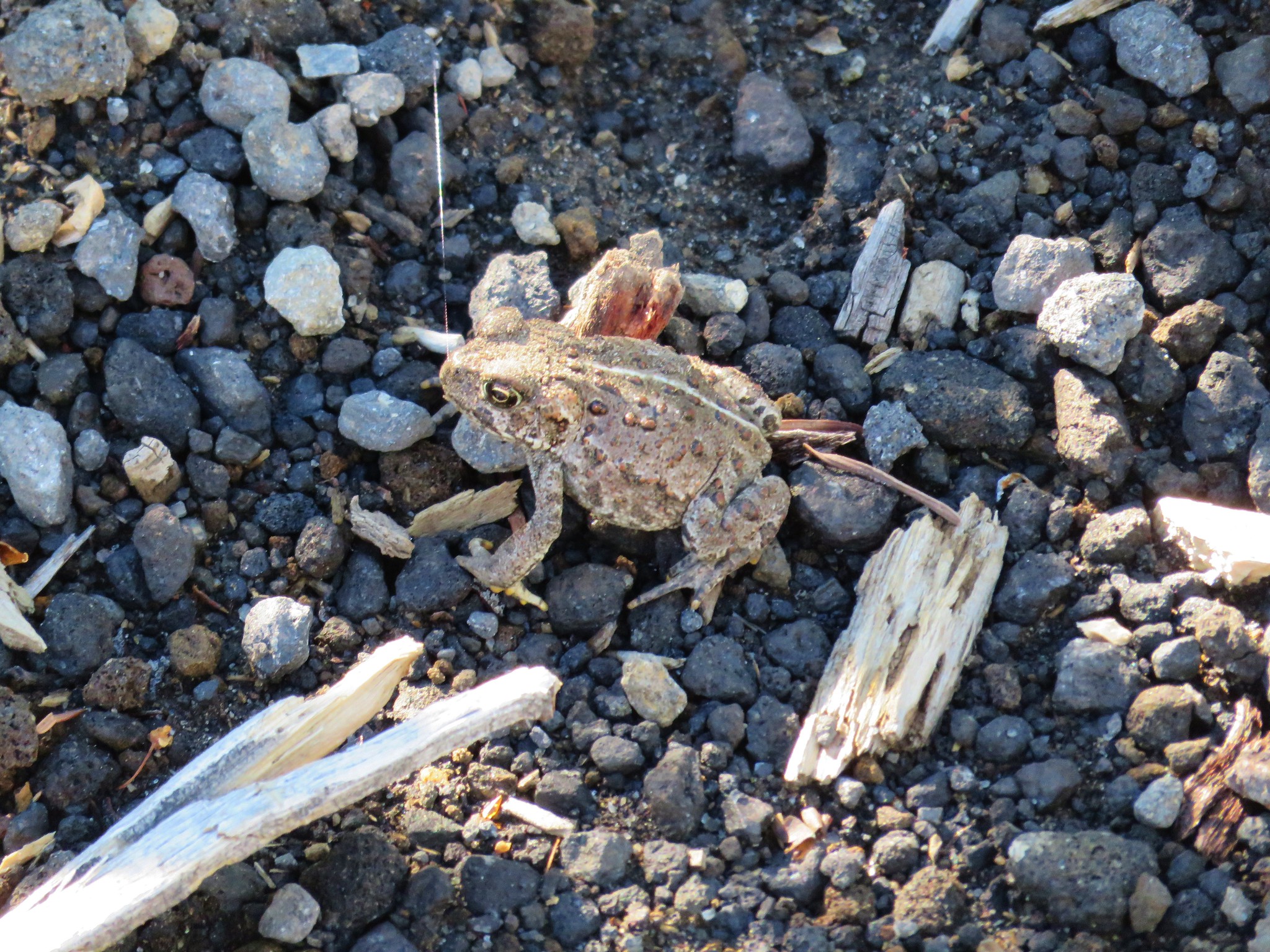 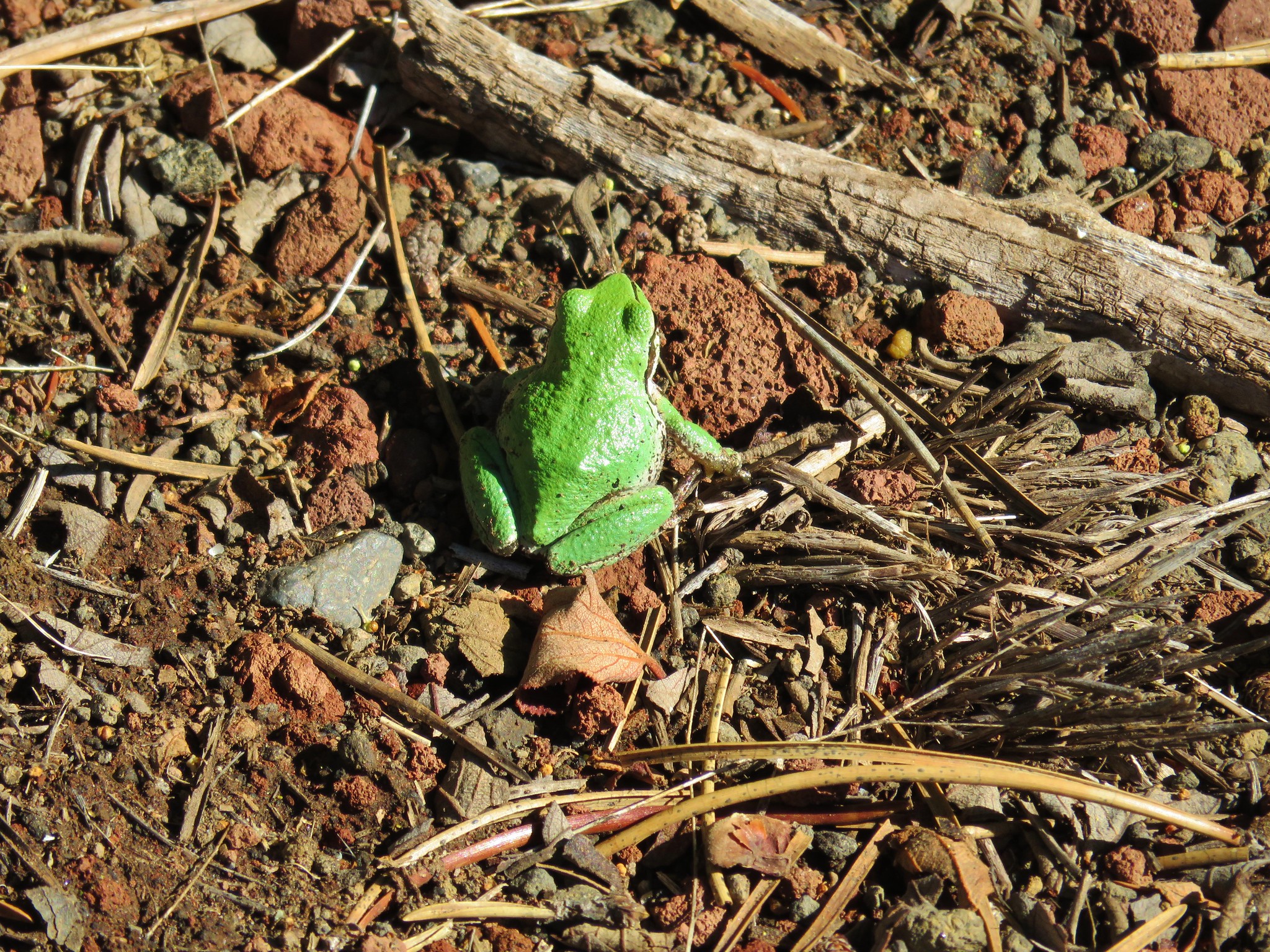 As we neared the sno-park Three Fingered Jack came into view through the trees. 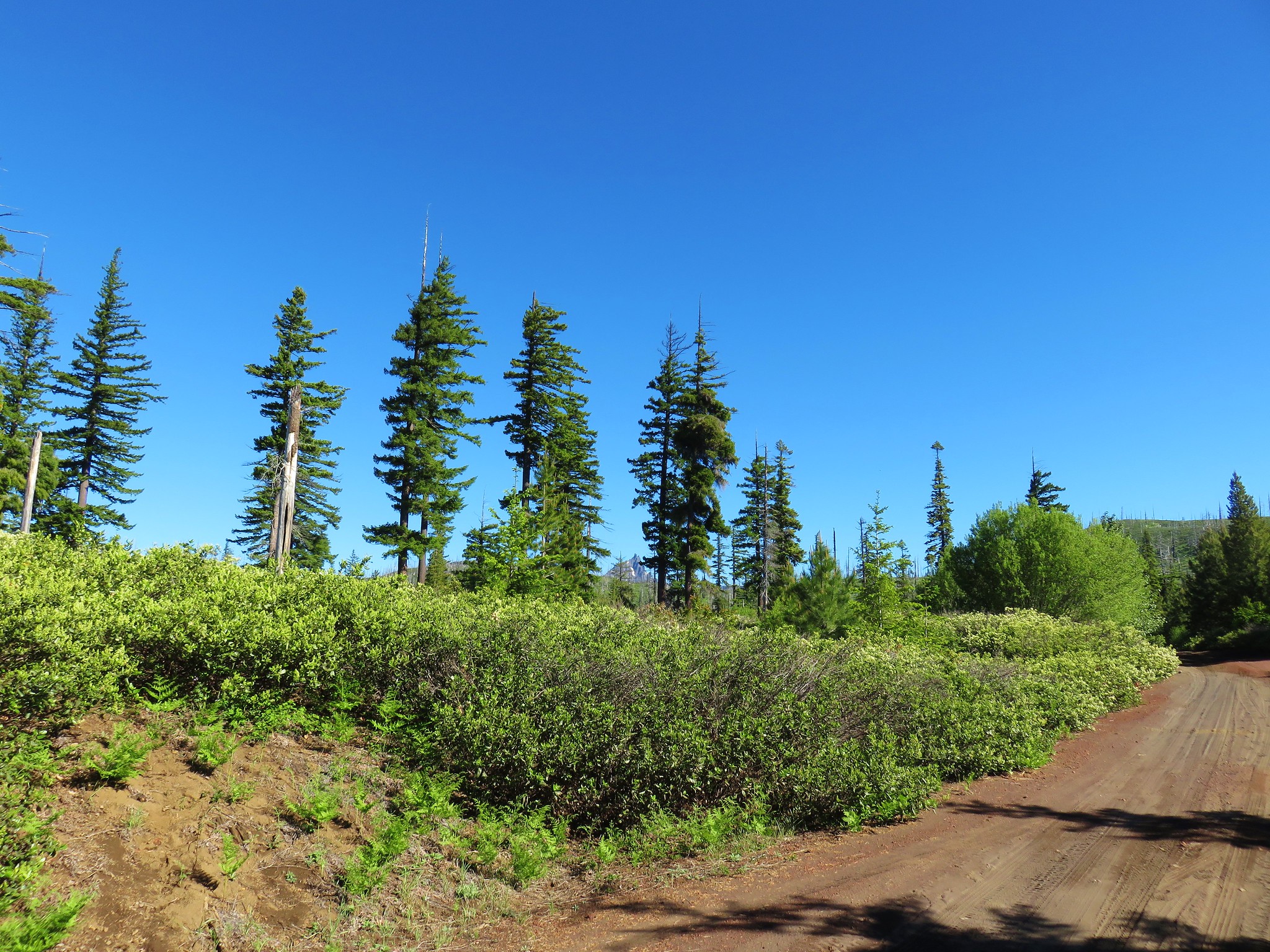 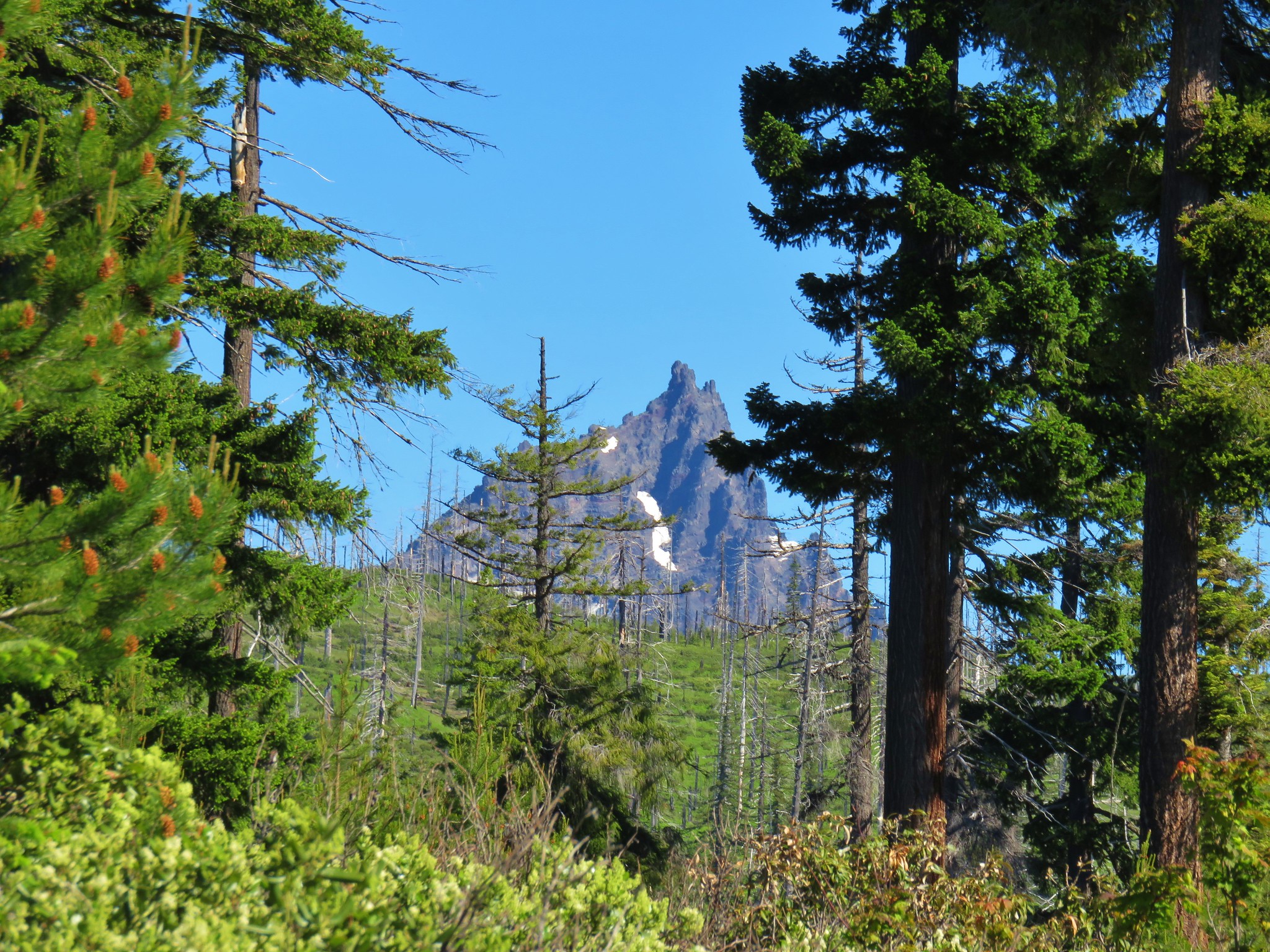 Remember my comment earlier about avoiding any more ugly roads for the weekend? Well Google got us again. We had originally planned on visiting the nearby Skylight Cave after the hike. In June between the hours of 9 and 11 am sunbeams come through an opening in the roof a short lava tube. The driving directions in our “Bend, Overall” guidebook were from Highway 242 but a look at Google Maps had shown what appeared to be a pretty straight forward 5 mile(ish) drive from Highway 20. We had written directions for that route but about 4 miles into our attempt we came to a 4-way junction with no road signs. Our written directions indicated we should go straight but we were on a gravel road crossing a gravel road and the road ahead was a narrow dirt track. We tried using the Garmin to figure out where we were, but the Garmin showed far more roads than Google had and it seemed to agree that the dirt road was the one we were looking for. After some indecision Heather decided to give it a go. It was quickly obvious that that was a bad choice as the road was narrow, overgrown, and rocky in places. When we spotted a wide enough spot to turn around we did so retreating once again to the 4-way junction. It was after 10am and now we had no confidence that we were even where we had meant to be. So we threw up the white flag and decided to try again some other time when we can follow the guidebook directions.

When we got home we looked again on Google and discovered that the dirt track had been the correct route and we’d only been about 3/4 of a mile from the cave. Happy Trails!