Our final October hike brought us to the Diamond Peak Wilderness for our second ever visit. This 52,611 acre wilderness is home to numerous lakes and 8,744′ Diamond Peak. Our plan for this visit was to start at the Trapper Creek Trailhead and take the Yoran Lake Trail to Yoran Lake then head cross-country to the Pacific Crest Trail returning on a loop past Midnight Lake. It was a rainy drive for most of the morning but we arrived at the West Odell lake Access off Highway 58 under clouds that were beginning to break up. Parking for the trail is located across from the Shelter Cove Resort next to some railroad tracks. 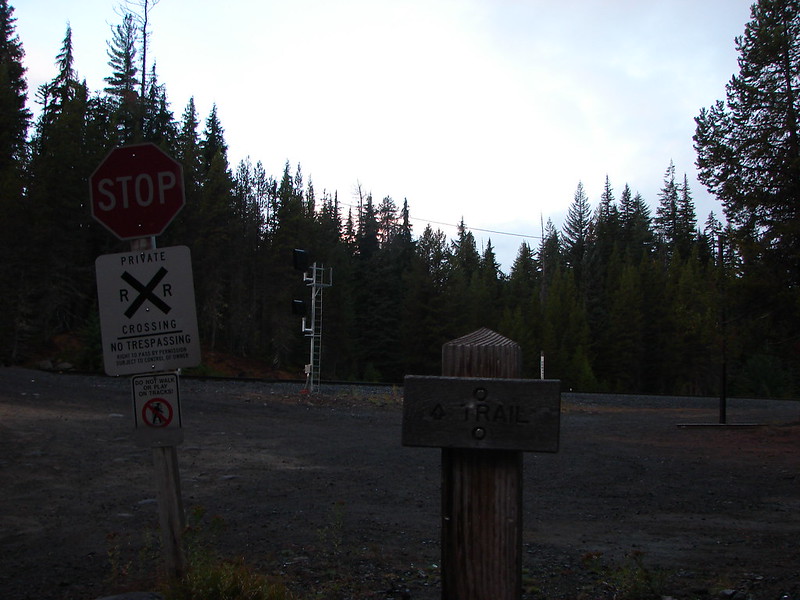 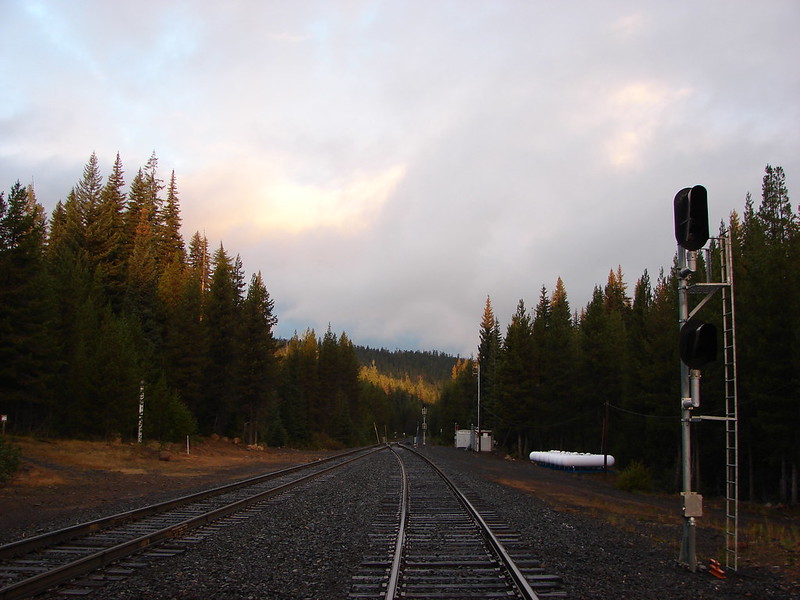 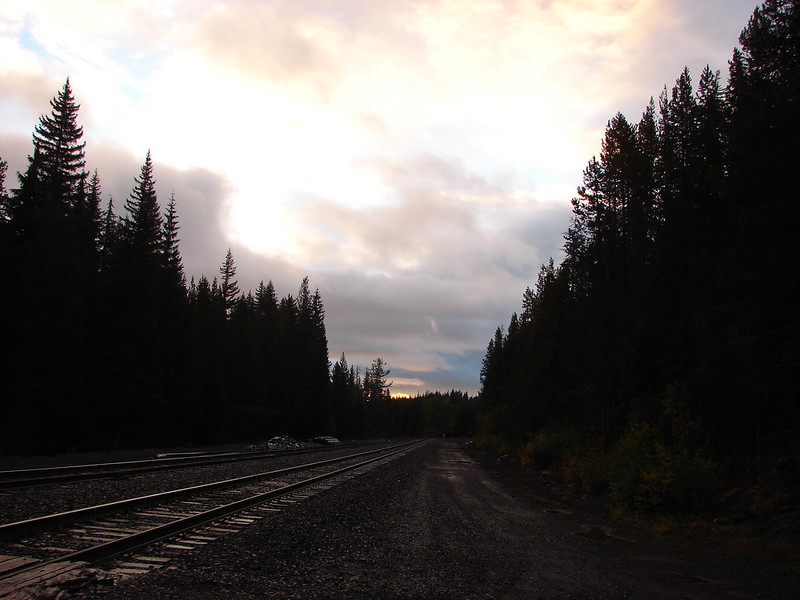 The actual trail started on the far side of the tacks and quickly entered the wilderness. 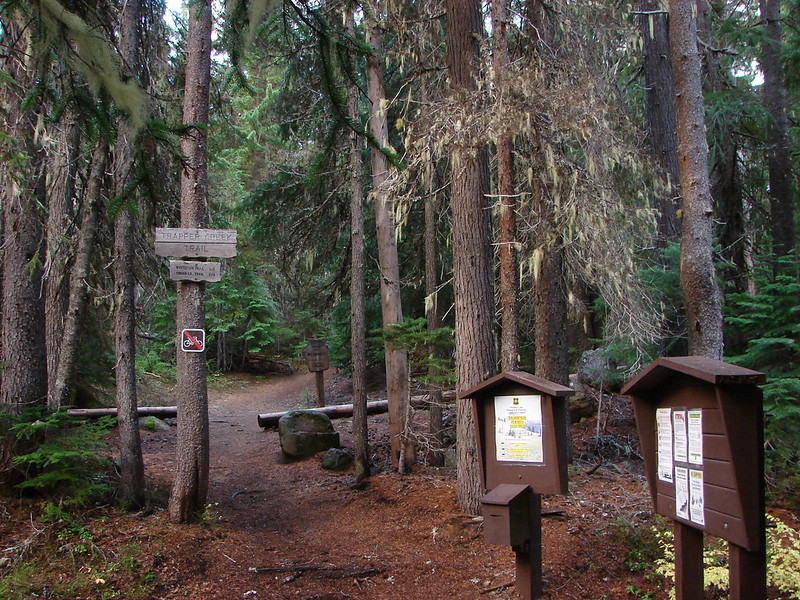 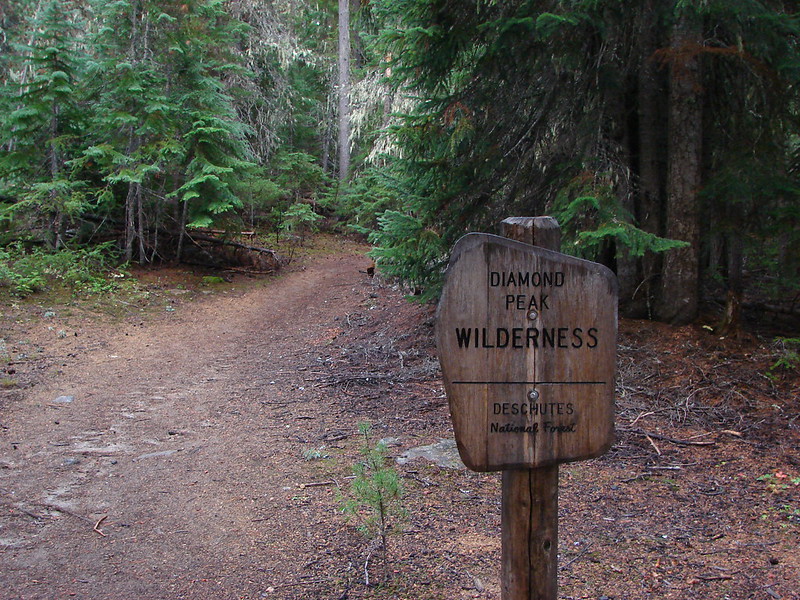 Just a short while after entering the wilderness the trail split. The left fork led to Diamond View Lake and the right to the Yoran Lake Trail. 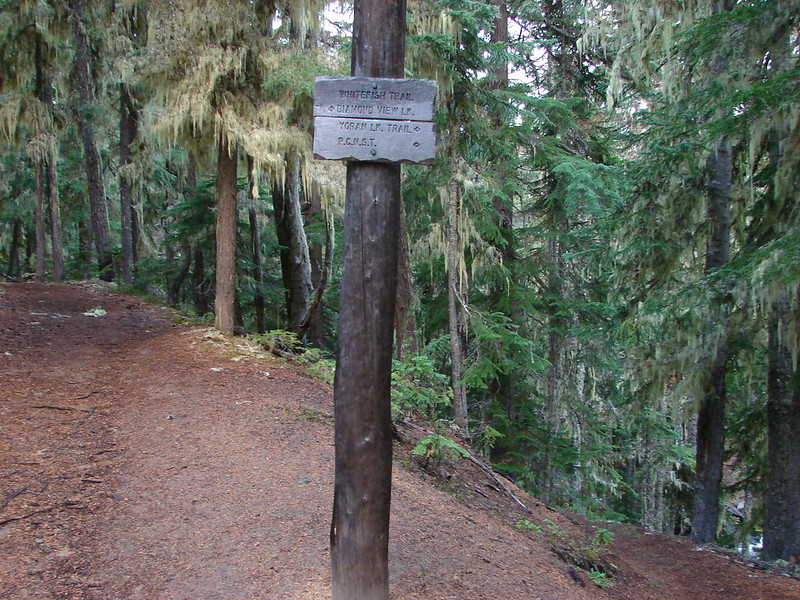 We took the right hand fork which briefly followed Trapper Creek passing a small waterfall just before crossing the creek on a footbridge. 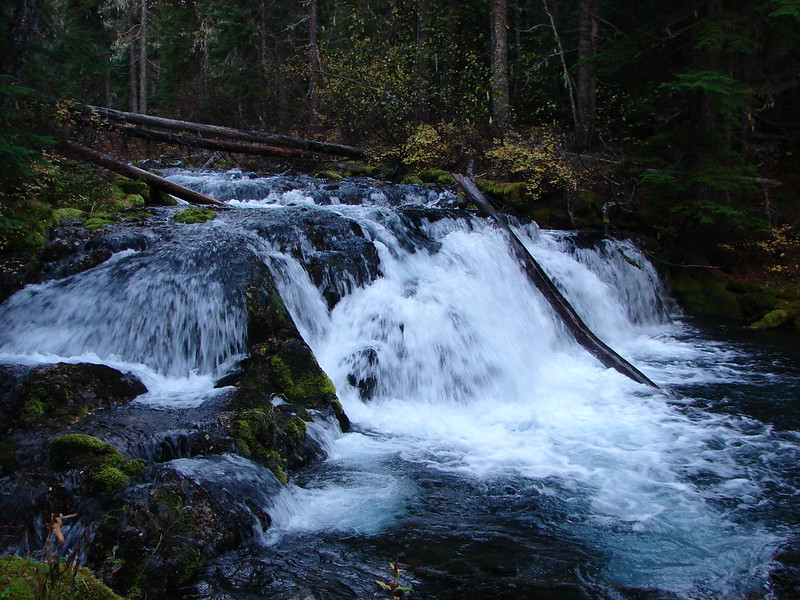 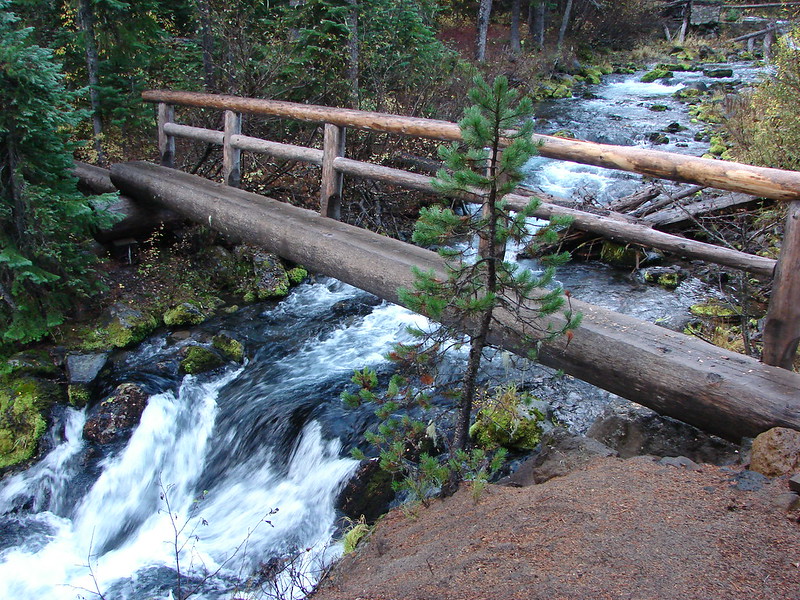 The trail split again at the Yoran Lake Trail which headed uphill to the left while the path on the right led to Pengra Pass and the PCT. We began the steady climb up to Yoran Lake as a little fog rolled through the forest. 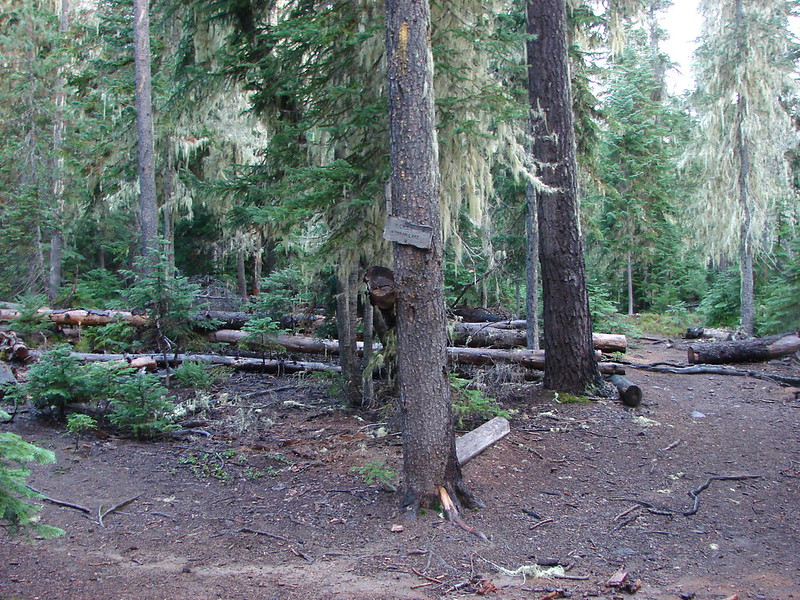 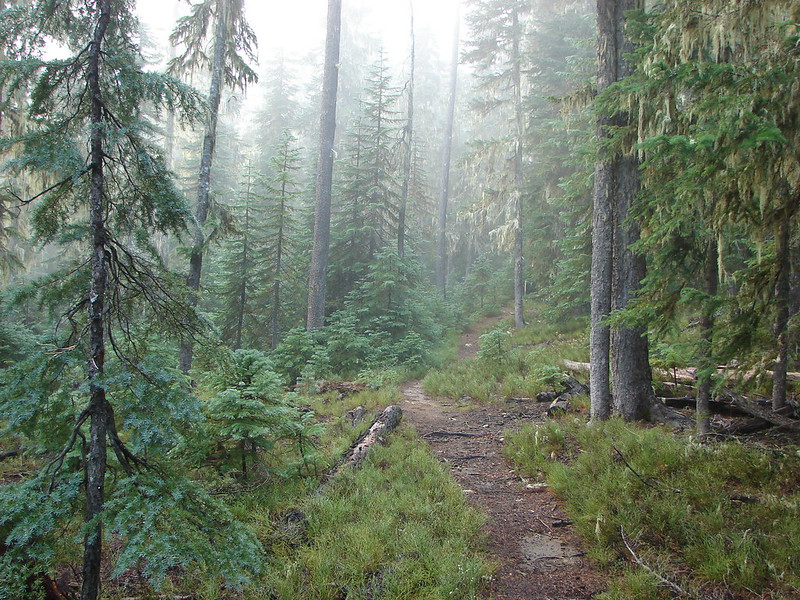 Yoran and Midnight Lakes were only two of several lakes we were going to be visiting on the hike as well as a number of smaller ponds. We came to the first small lake after 3 miles on the Yoran Lake Trail. 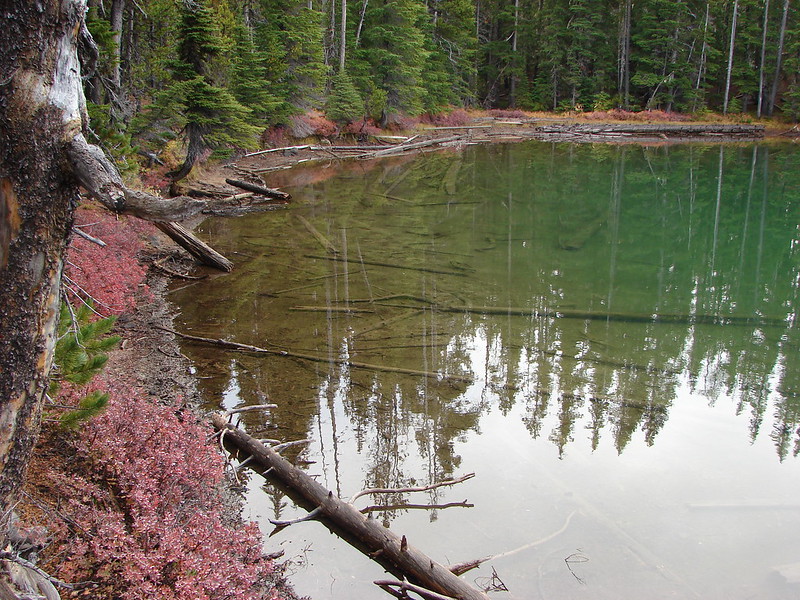 In another mile we arrived at Karen Lake.

On a clearer day we would have had a great view of Diamond Peak but we had to settle for some briefs peeks of the peak. 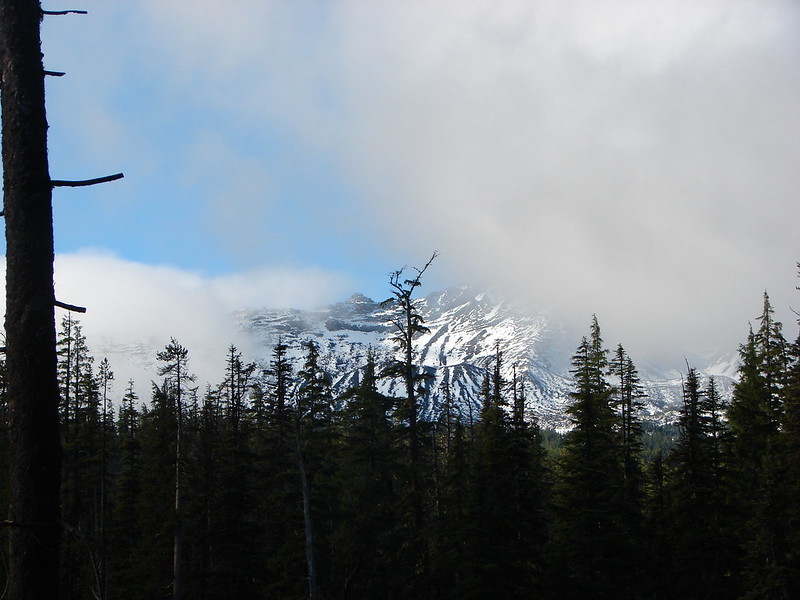 Just to the NW of Karen Lake we found Yoran Lake at the end of the Yoran Lake Trail. Diamond Peak was again hidden by the clouds, but we had a little better view of Mt. Yoran. 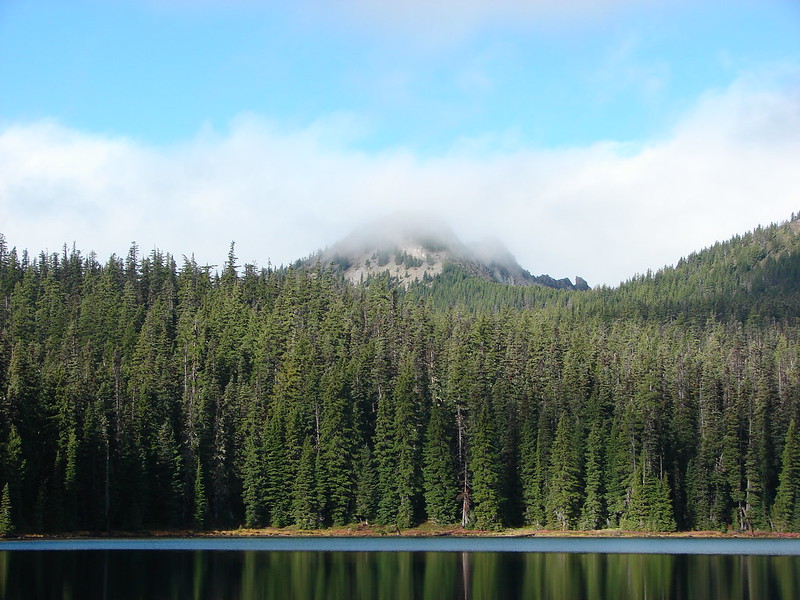 We made our way around the lake to the northern end where there was a pair of small islands. 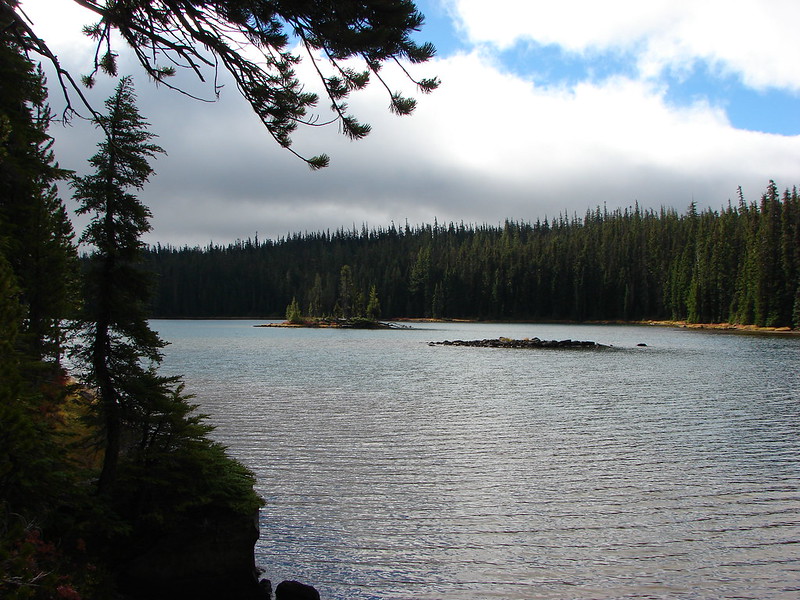 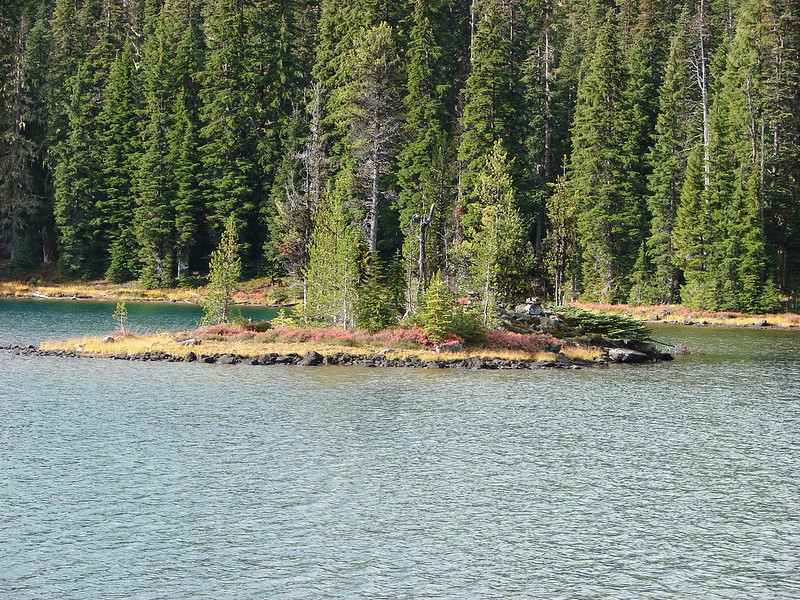 We left the lake shore when we passed the second island, crossing a pretty little inlet creek, and headed true north toward the PCT. 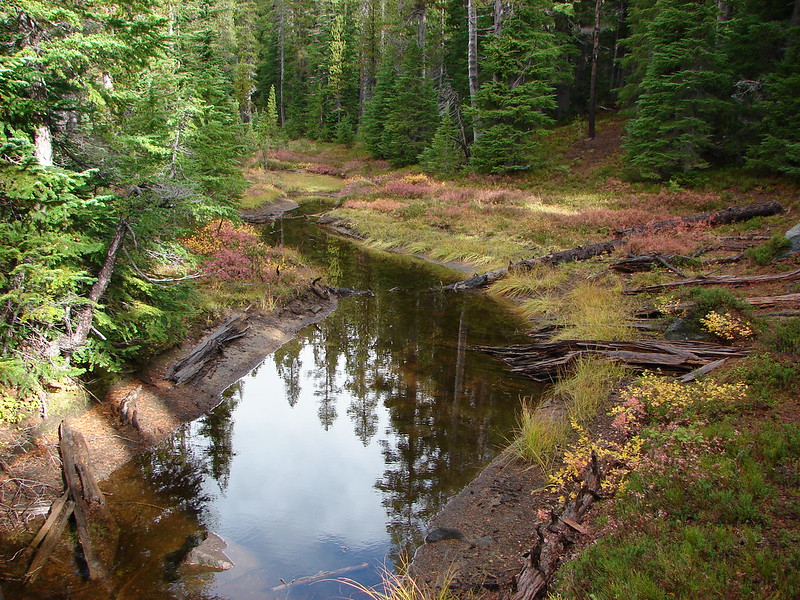 At first we were following a faint path but we lost the tread as we passed by a pair of small ponds. 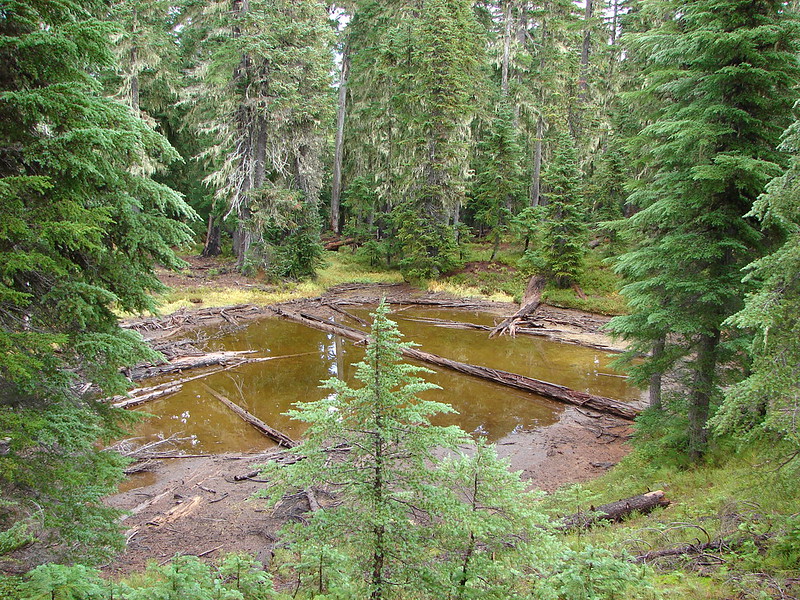 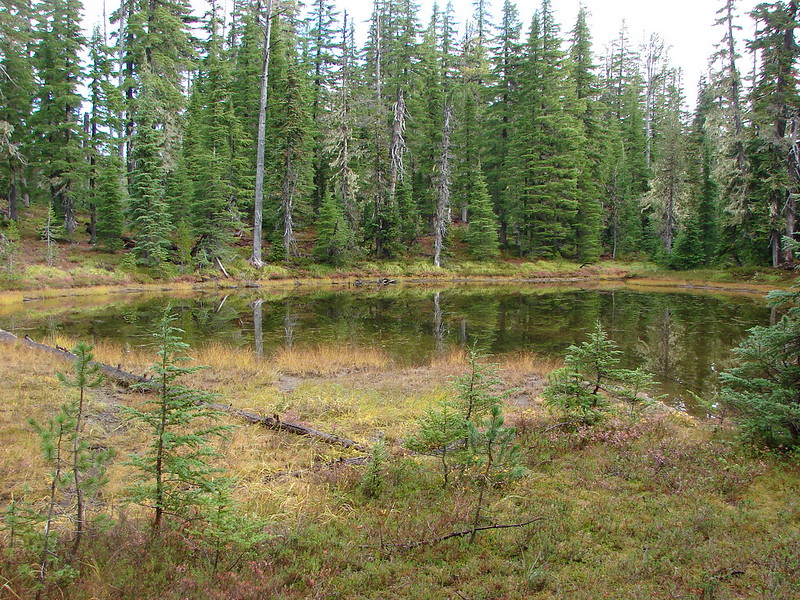 A couple of quick checks of the GPS showed we were on course to arrive at Liles Lake which lies next to the PCT. Our guidebook said to go around the left side of the lake but we arrived closer to the right side. We picked up a trail going around the lake and decided to just follow it around that side. 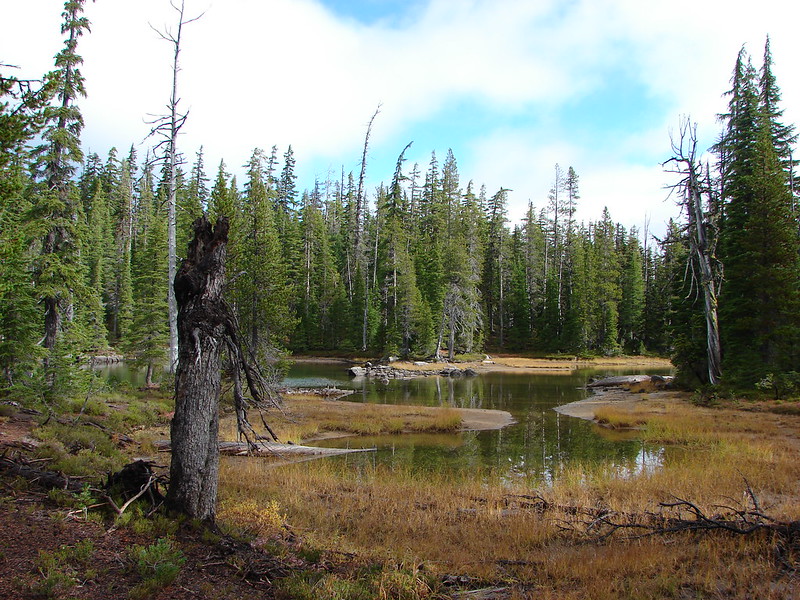 It looked like the right side might be difficult to go around earlier in the year when the water level would have been higher but we had no problem following the path and hooking up with the PCT on the north side of the lake. We turned right and started downhill passing some small ponds and passing through some interesting forest. 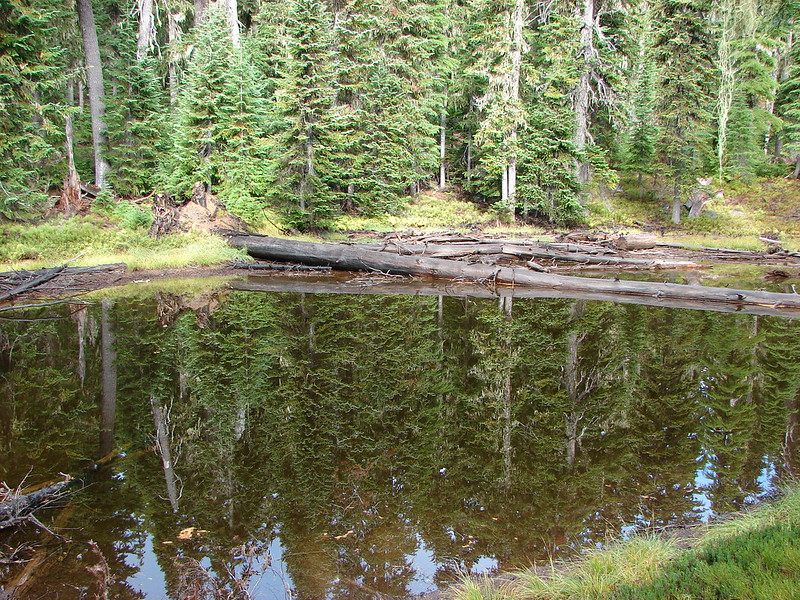 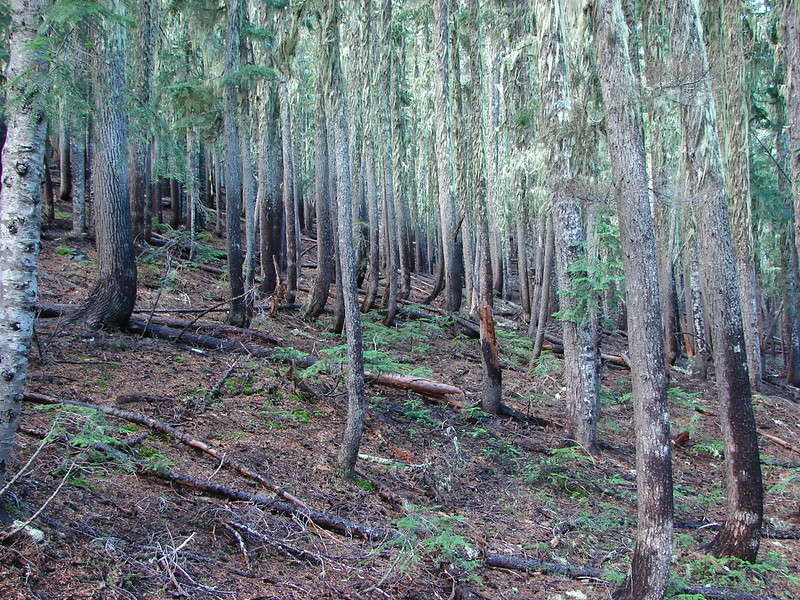 The next lake we came to was Hidden Lake.

We passed several more pretty little ponds between Hidden Lake and the next named lake which was Arrowhead Lake. It was pretty clear why this forest is full of mosquitoes most of July and August with ponds and lakes seemingly everywhere. 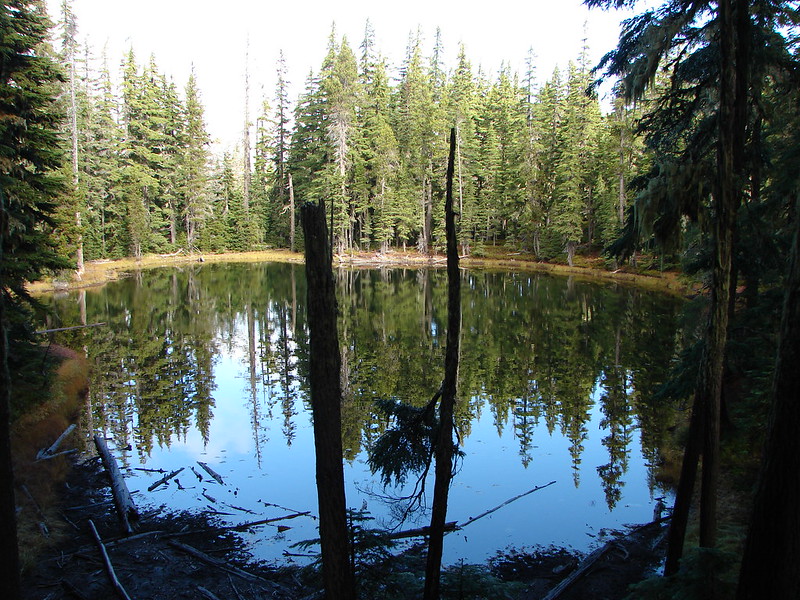 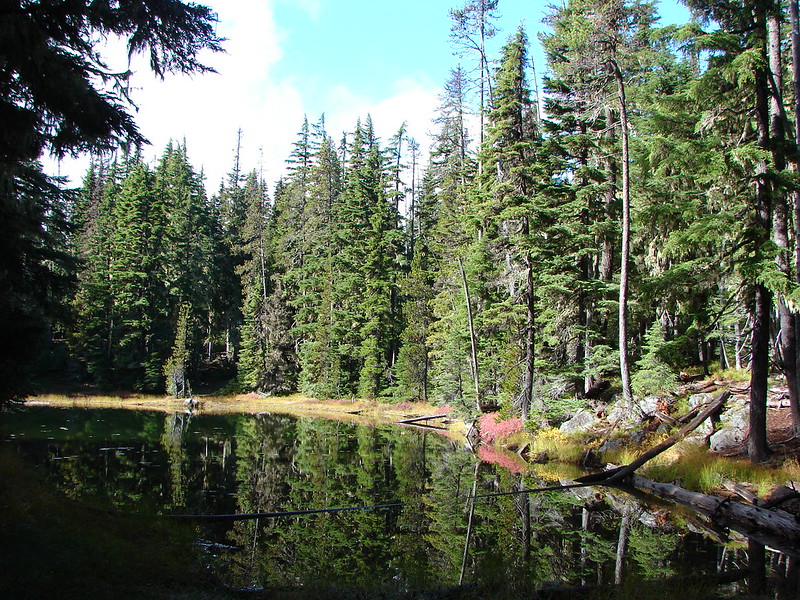 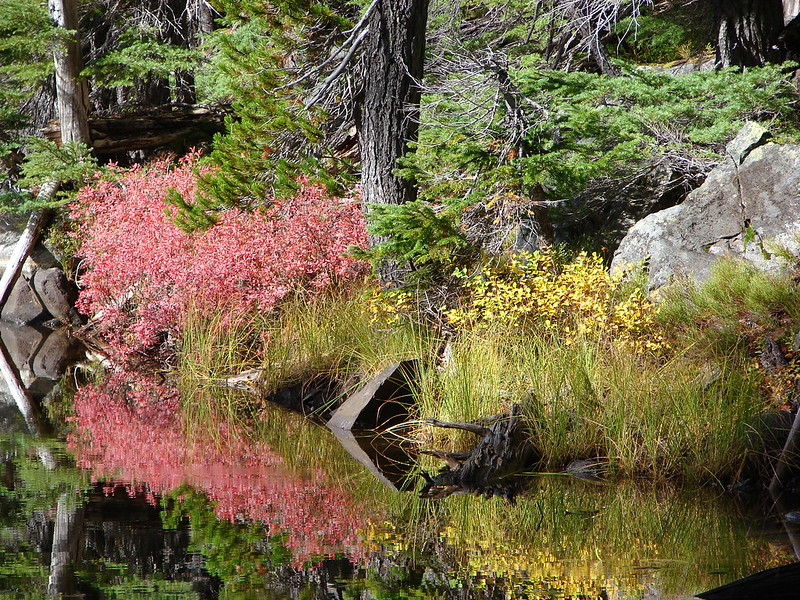 We almost passed by Arrowhead Lake waiting for a clear path to it, but when we didn’t find one we made our own. We were glad we did because this lake had some of the prettiest water we had seen that day.

Continuing down the PCT from Arrowhead Lake we passed a rock that Heather dubbed Gorilla Rock due to it’s interesting shape. She thought it looked like a gorillas head and arm. 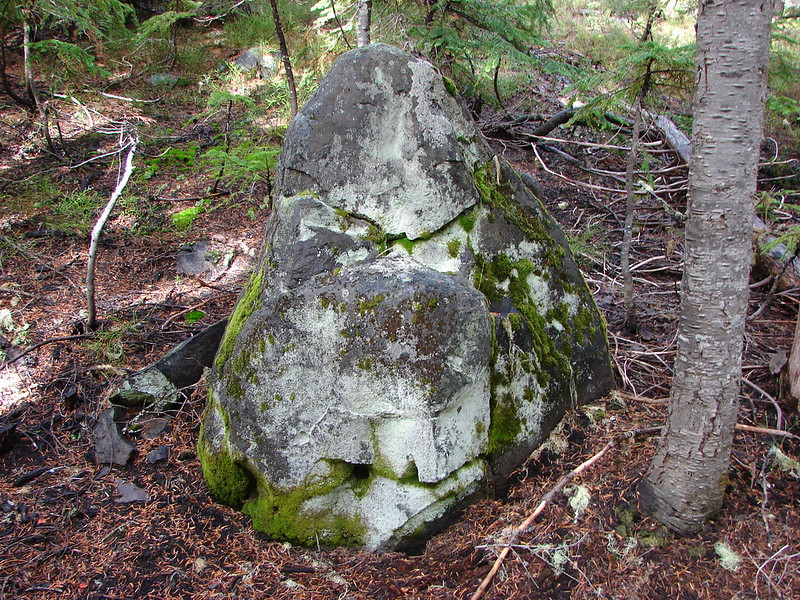 Shortly after passing the rock we spotted movement through the trees further down the trail. I thought we’d seen another person or dog coming up the trail and then we saw a second flash of color which we could tell was an elk. A total of four elk cows had crossed the trail and passed in virtual silence through the forest and over a small ridge. I was snapping pictures every time one appeared through the trees but I never got more than the back half of one. 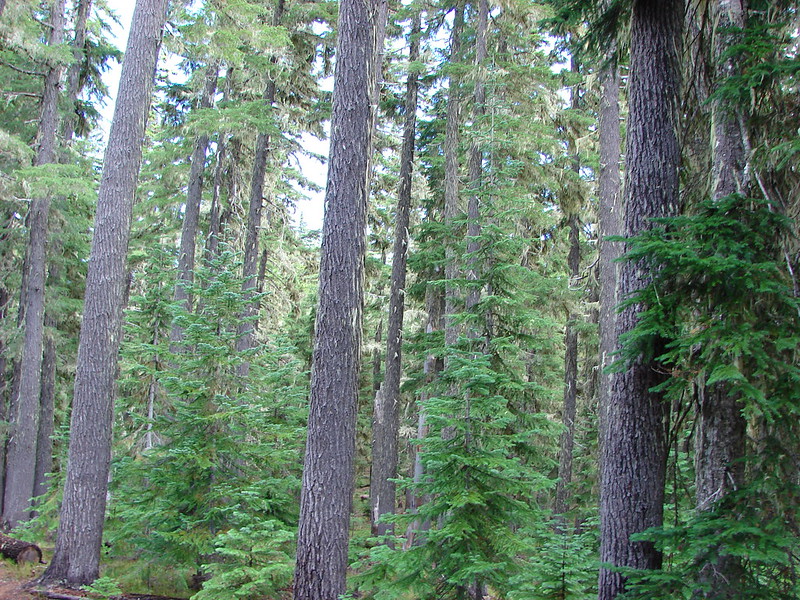 The final named lake we visited was Midnight Lake.

We stopped at one final unnamed lake/pond before arriving at Pengra Pass.

We left the PCT at Pengra Pass and followed an old road right .4 miles where a trail split off from the right hand shoulder. 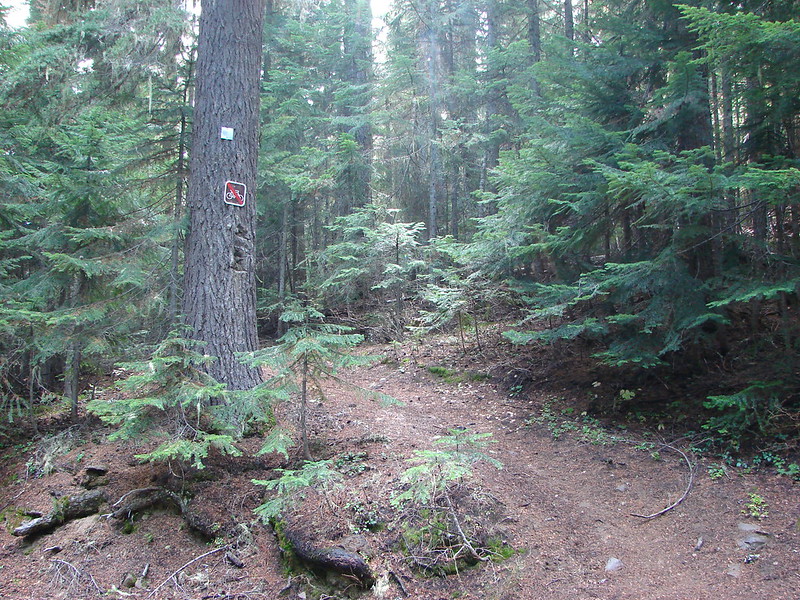 It was only another .6 miles back to the Yoran Lake Trail and .7 more back to our car. On our way home we made a pit stop at Salt Creek Falls, the previous hike we’d taken in the Diamond Peak Wilderness. https://wanderingyuncks.wordpress.com/2013/07/07/salt-creek-falls/ 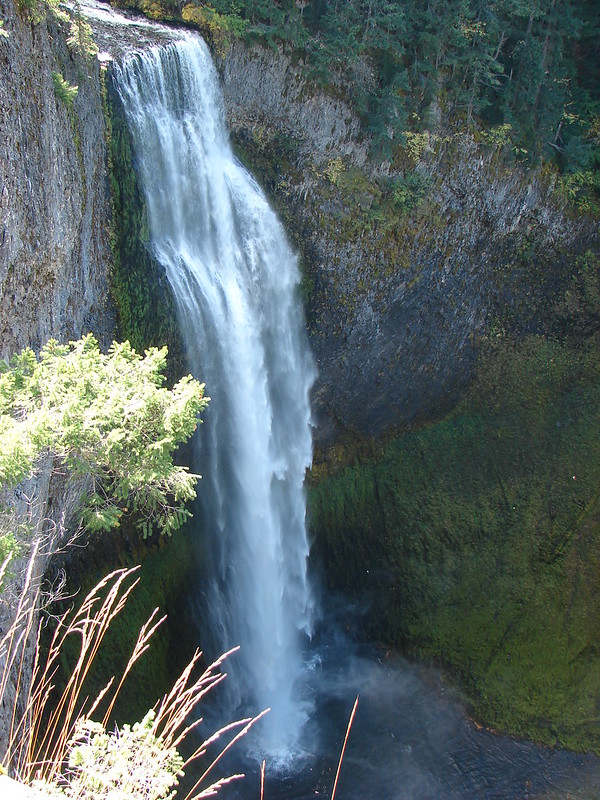 All the lakes were very nice and we are hoping to do some backpacking in the area sometime. Diamond Peak is a non-technical climb and there are trails all the way around the mountain making for numerous possible destinations. More ideas for future trips 🙂 Happy Trails!

[…] Trailhead, a trailhead that we were familiar with having started our Yoran Lake hike there in 2014 (post). After crossing some railroad tracks we arrived at the actual trail and set off into the Diamond […]

[…] Yoran Lake all the way to the Pacific Crest Trail. When we had done our Yoran Lake hike in 2014 (post) we had bushwacked from Yoran Lake to Lils Lake and the PCT so this was welcome news. […]