We are throwing back once again to our August 2011 vacation in Central Oregon.  On 8/4/11, the day after our mosquito infested attempted hike at Benson Lake, we were headed back out to another lake. We had originally planned on visiting the Green Lakes but after reading the snow report and our experience on the previous day we turned our attention to Horse Lake instead.  Although the elevation for the Horse Lake hike was only slightly lower than that of the Benson Lake Trail it’s location on the east side of the Cascade Crest meant less snow.

The trailhead is located across the Cascade Lakes Highway from the Elk Lake Resort just under 33 miles from Bend. On the drive that morning from Bend we spotted a number of deer in a meadow along the highway near Sparks Lake. Broken Top rose behind the trees completing an amazing scene. 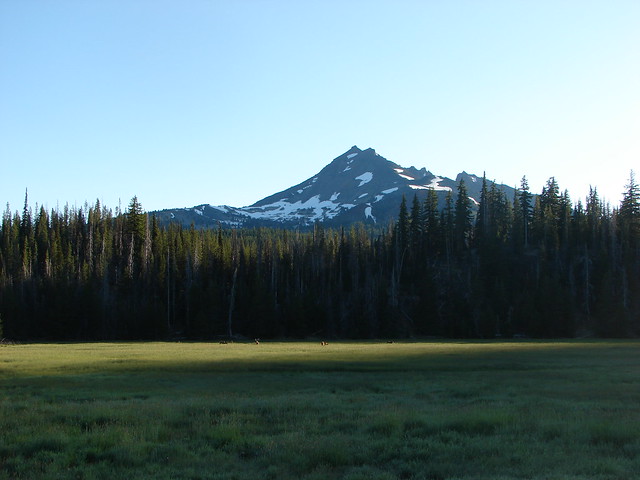 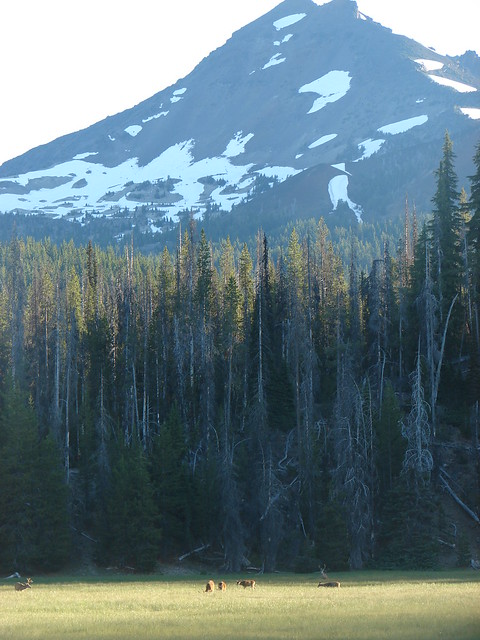 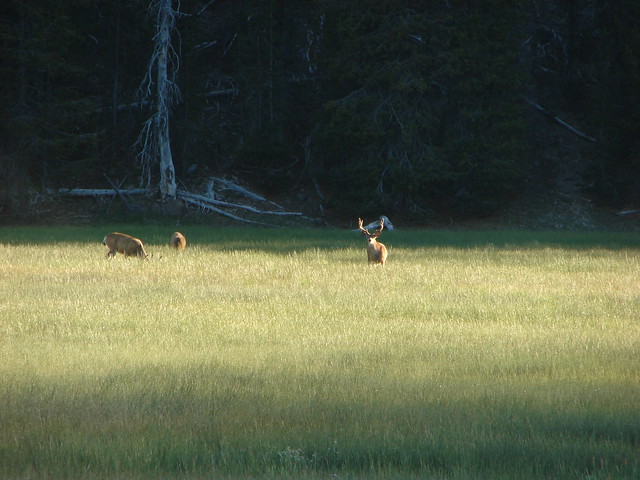 On the south side of the highway Mt. Bachelor loomed over the meadows around Sparks Lake where the heads of canada geese popped up out of the grasses. 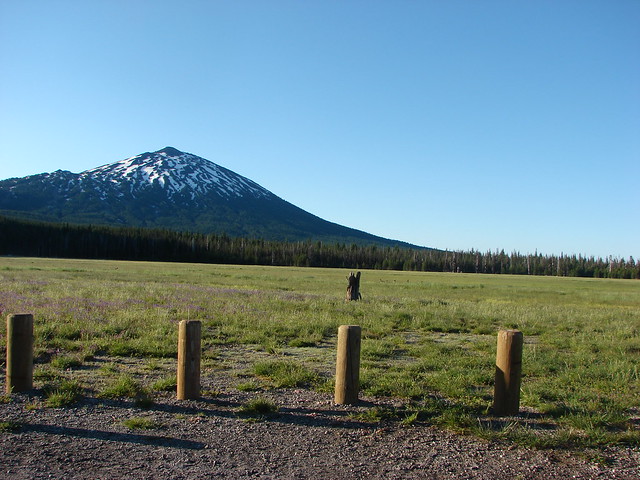 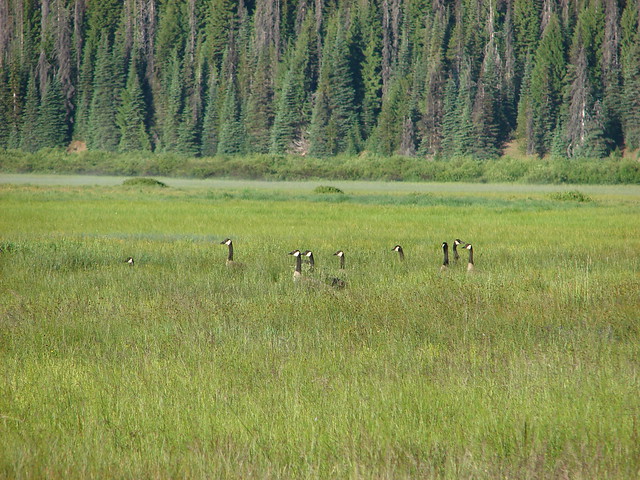 After enjoying the impromptu wildlife show we continued to the trailhead where we set off on the Horse Lake Trail. 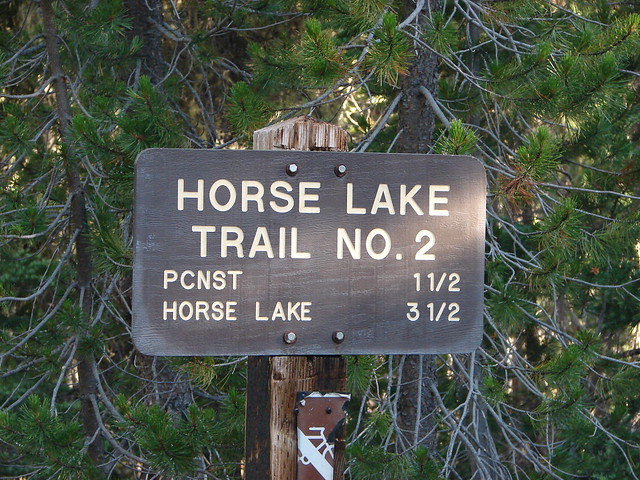 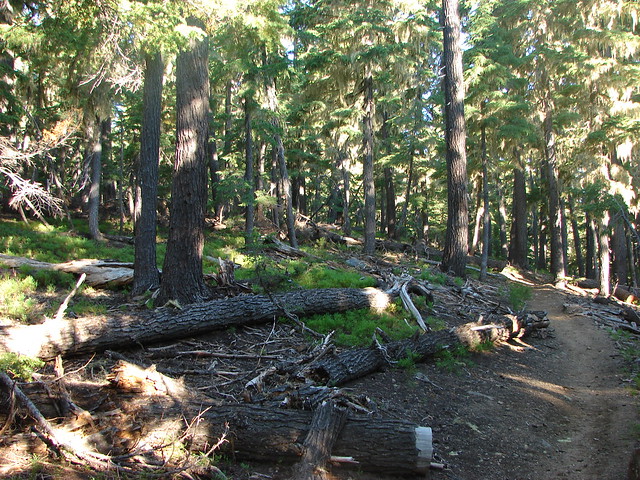 The trail passed through a nice forest gaining 300′ in just under a mile and a half to a junction with the Pacific Crest Trail then lost 350′ over the next 2 miles to another trail junction near Horse Lake. We were not able to take many pictures along this first portion of the hike. Although there was much less snow along this trail there were just as many mosquitoes. Their high pitched whinny buzz was an ever present annoyance, and after Heather’s experience of having one fly into her eye neither of us wanted them anywhere near our heads. We hurried along and came upon a pair of Forest Service employees doing some trail maintenance decked out in mosquito netting. We paused for just a second and they asked us how we were able to deal with the bugs to which we answered that we were covered in Deet and moving as quickly as possible. 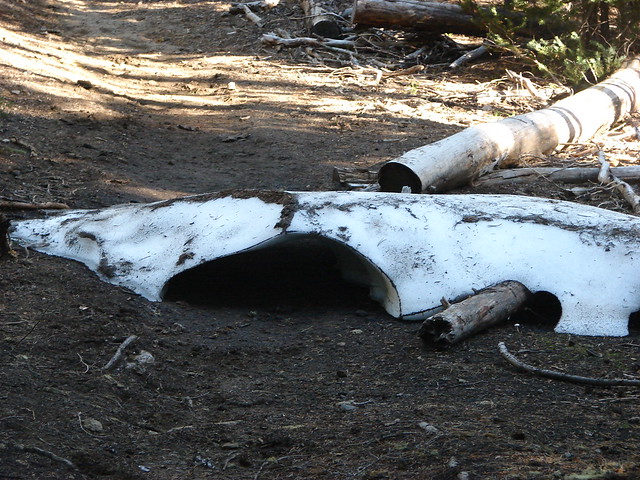 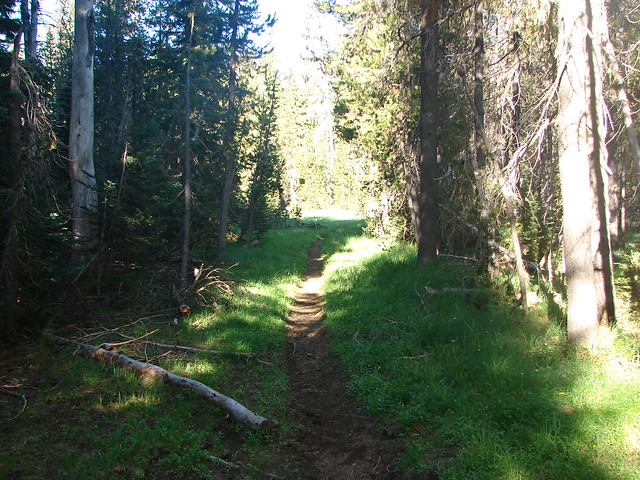 At the junction near Horse Lake the lake was not readily visible. We turned right watching for the lake on our left following a boot path to the water after we spotted it. 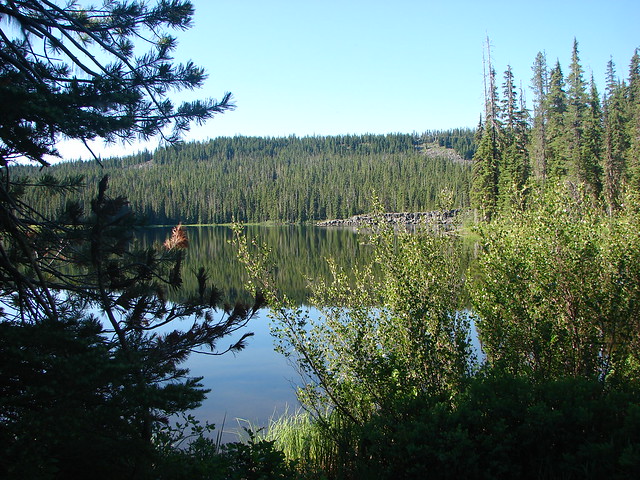 Thankfully the mosquitoes were not nearly as bad at the lake and we were able to take our time and enjoy it. Mt. Bachelor was visible from the NW side of the lake. 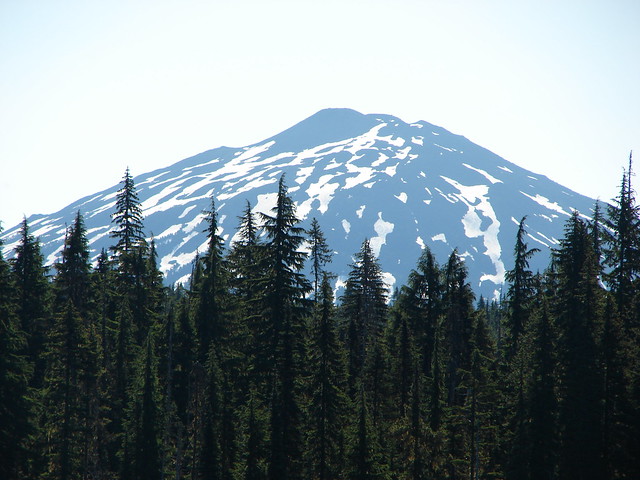 We followed a fisherman’s path around the lake which brought us to a rocky peninsula with a view of the South Sister as well. 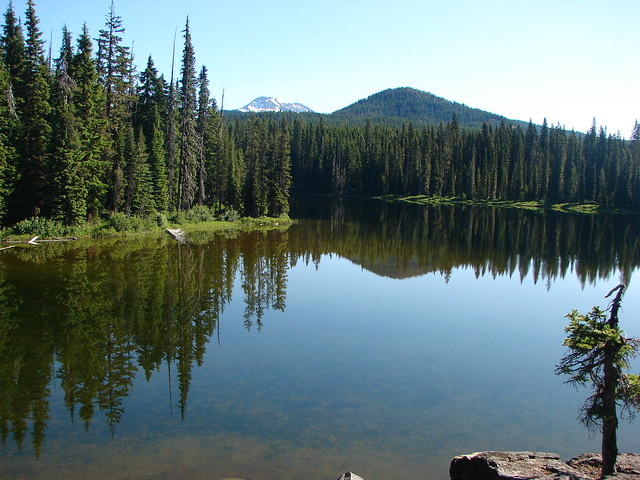 We spent some time on the peninsula eating lunch and watching fish swim by. 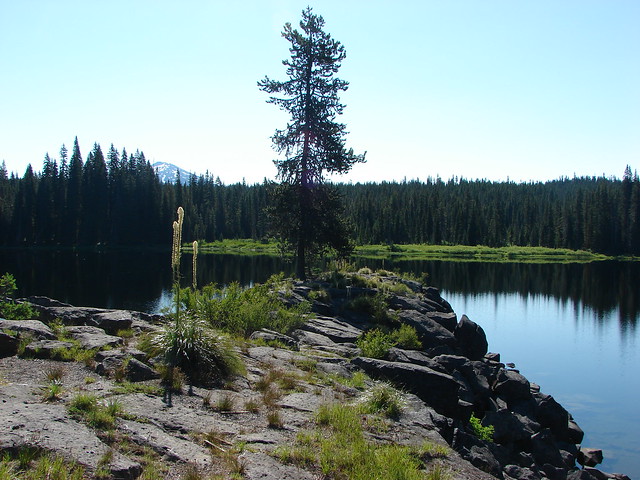 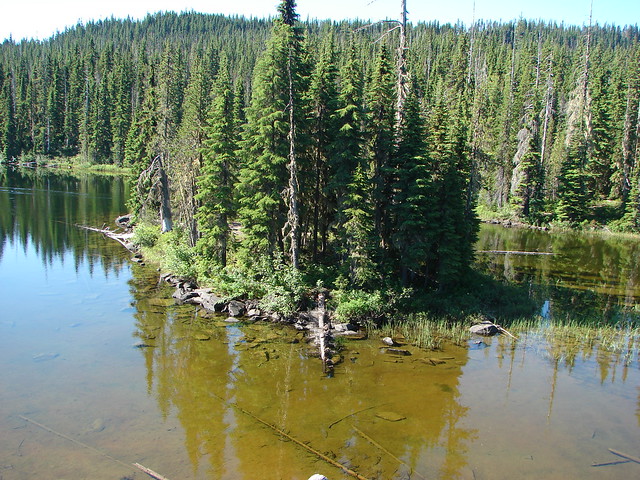 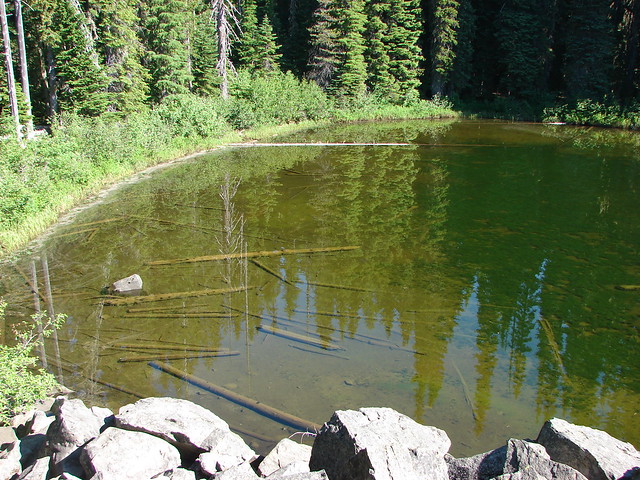 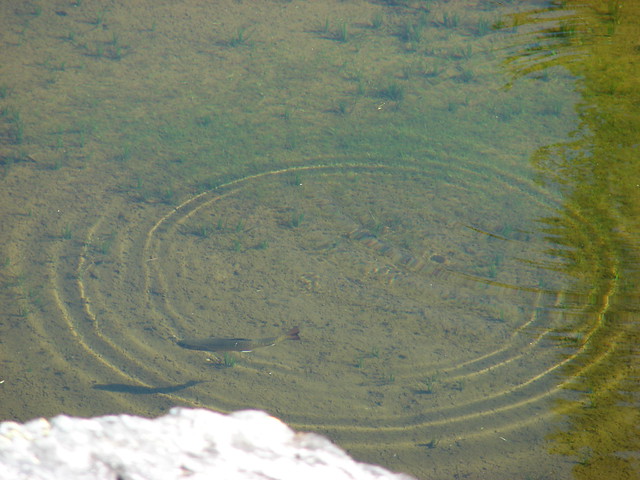 After lunch we finished going around the lake turning left on a good trail past some nice meadows. 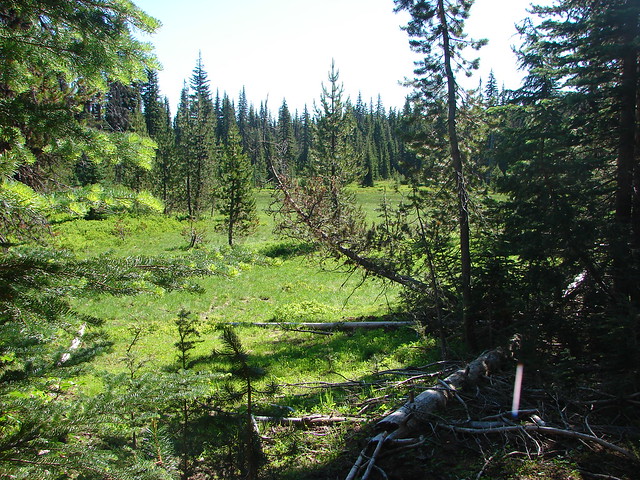 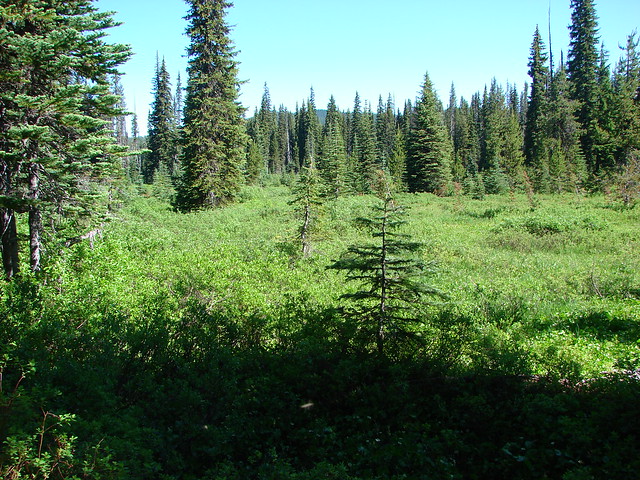 We quickly came to another trail junction and turned right following a sign for Dumbbell Lake. About a quarter mile later we came to yet another junction. This time we did not follow the pointer for Dumbbell Lake which was to our right but instead stayed straight following a pointer fro Sunset Lake. A short distance from this junction an unmarked path to the left led to little Colt Lake. 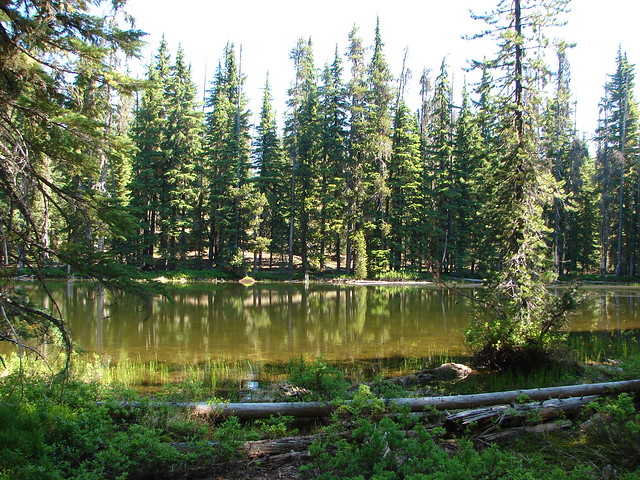 We had found the mosquitoes again so we stopped at Colt Lake just long enough to get a picture then hurried on. Sunset Lake was off the trail to our right and once again we were not able to stop for long. 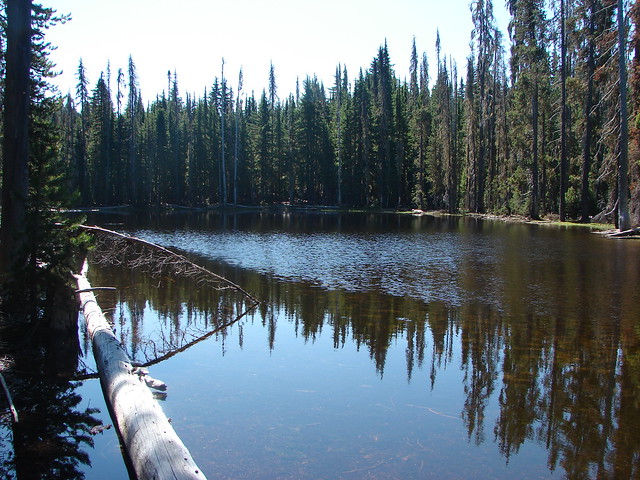 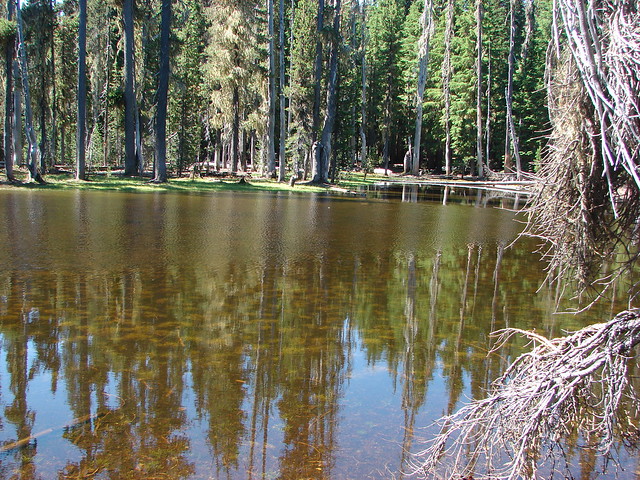 We turned left on the PCT for just over a mile to a trail junction where we followed a point for the Elk Lake Trailhead. Just before the junction the PCT entered a burn area where the mosquitoes once again relented. We were able to enjoy the mountain views as we passed through the burn which took up the majority of the final mile of trail back to the trailhead. 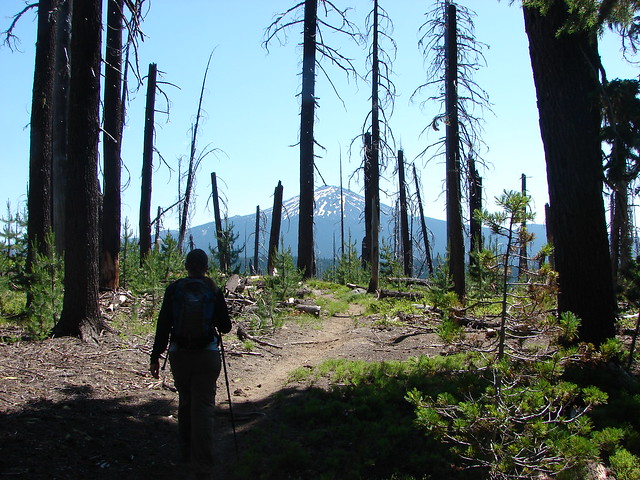 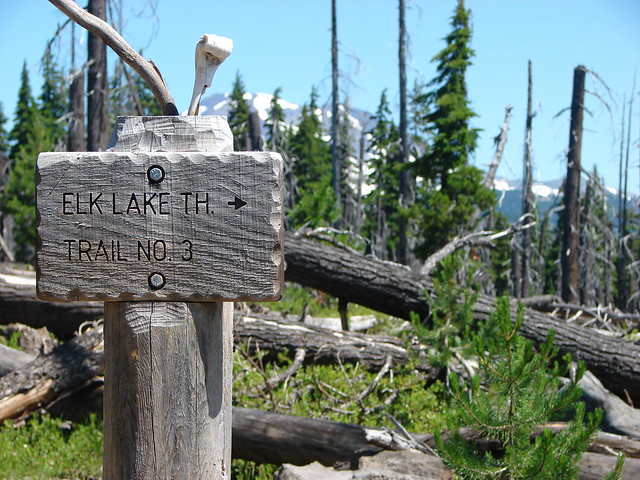 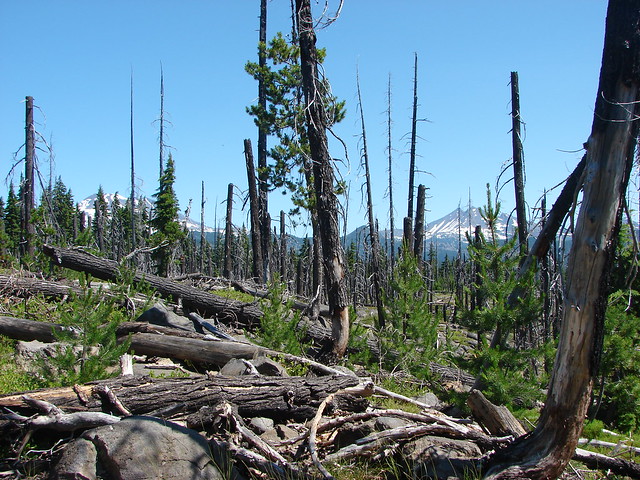 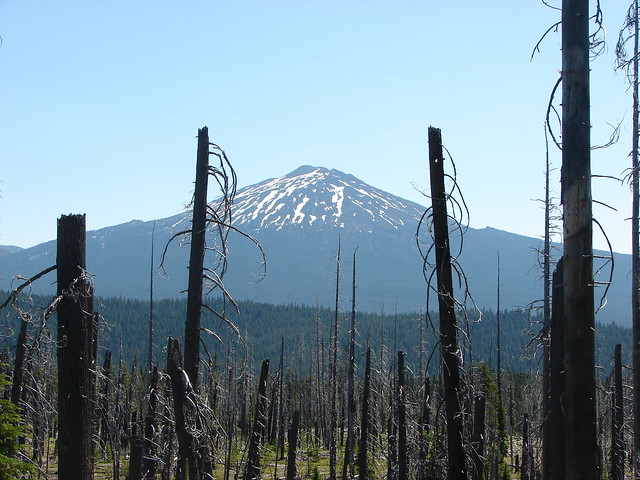 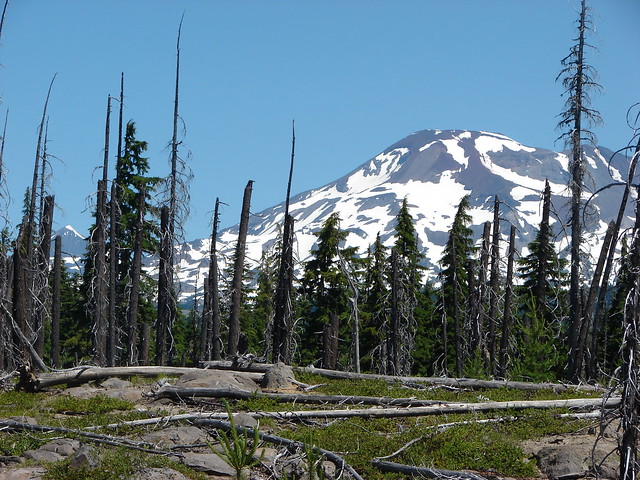 We made two stops on the way back to my parents house. The first was along the Cascade Lakes Highway near Devils Lake to look at its spectacularly green water 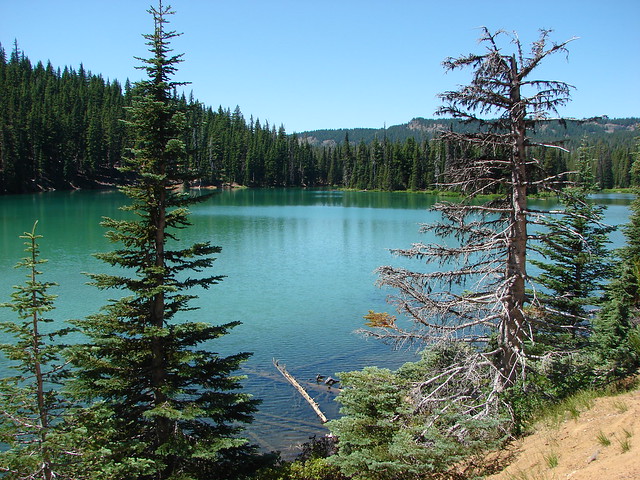 The second was at REI to by Heather a mosquito head net. Happy Trails!

Very nice, except the mosquito part.

We would have to agree, a few we can deal with but the swarms are not fun.

Wow. those bright greens and blues. Wonderful! And the funny geese!

I really enjoy watching geese for some reason, having their heads popping up above the grass just made it even better.

[…] continuing deeper (and fainter) into the Three Sisters Wilderness eventually ending at Horse Lake (post). We turned right though, onto the Olallie Mountain […]