This week’s throwback hike is an example of us being slow learners in our early hiking days. From 2011 to 2013 we took the first full week of August as vacation and headed over to Central Oregon for some hiking. We took that week because it that was the one week when we could be sure Dominique would not have any sports commitments. One of the drawbacks to taking the first week of August off, as we’d learned in 2011 at both Benson and Horse Lake, was the presence of mosquitoes in many areas.   So it shouldn’t have been a surprise that on 8/1/2012 when we picked Miller and Maidu Lakes for our hike that we would wind up losing another round to the little bloodsuckers. 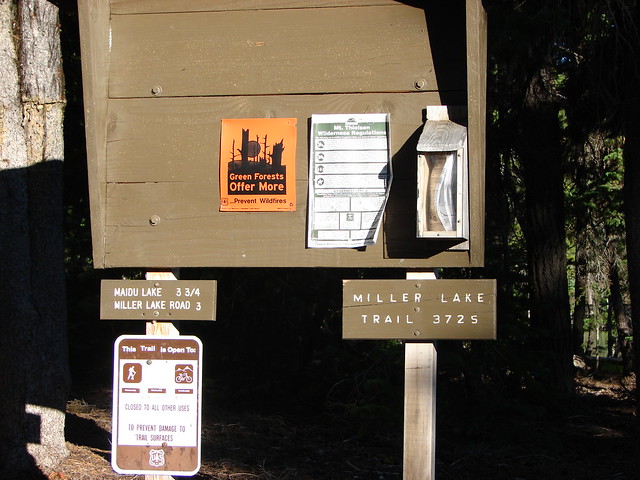 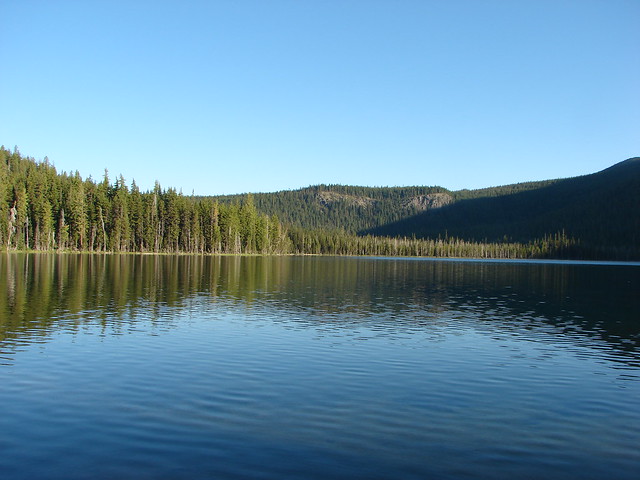 We were covered in Deet and wearing extra layers of clothes including gloves but nothing would keep the mosquitoes from their feast. The trail passed along the SW side of Miller Lake crossing Tipsoo Creek near the trailhead and Evening Creek at the .9 mile mark. Wildflowers including columbine and lupine bloomed along the trail while gray jays ate breakfast and a merganser floated on the water. 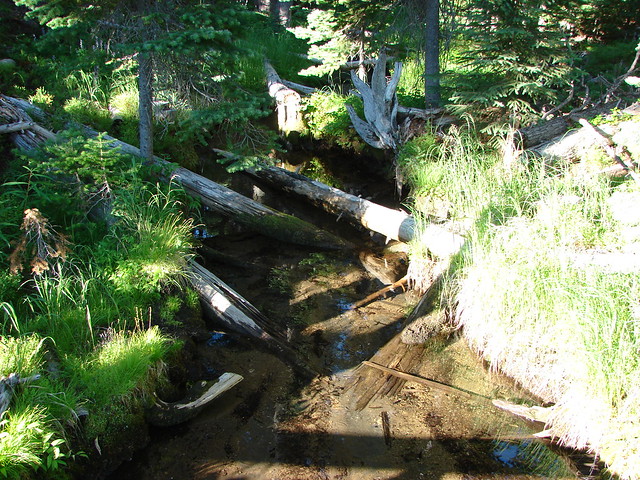 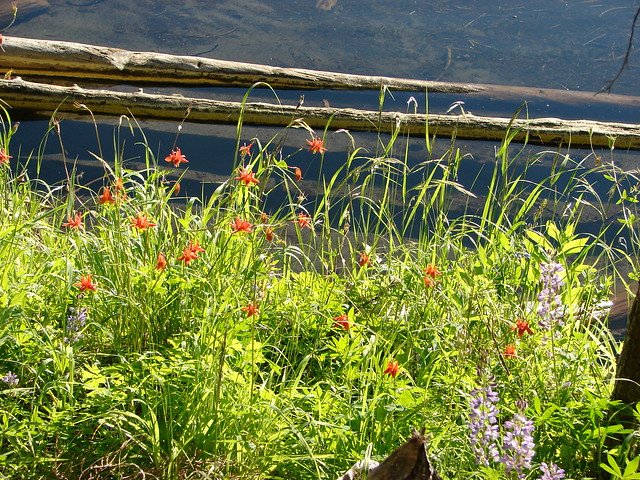 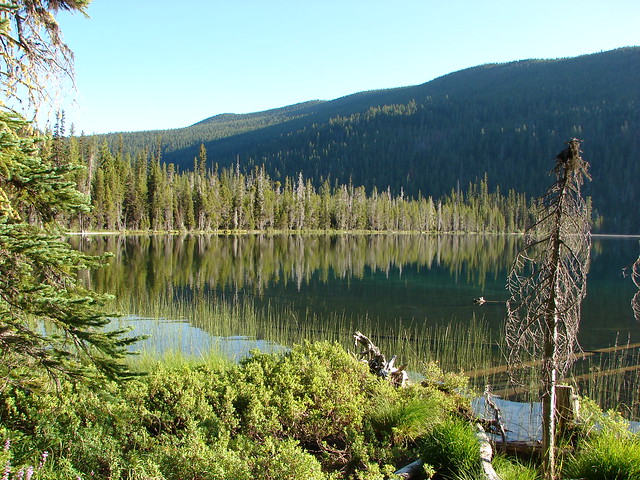 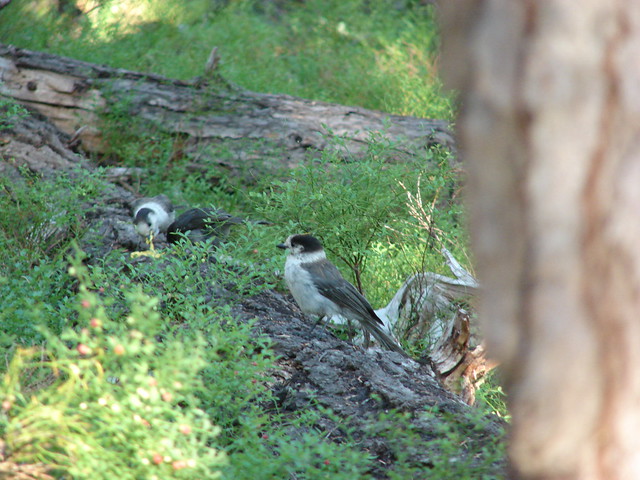 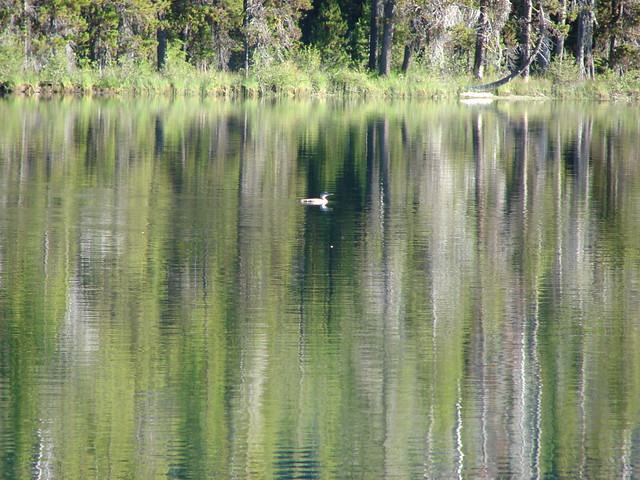 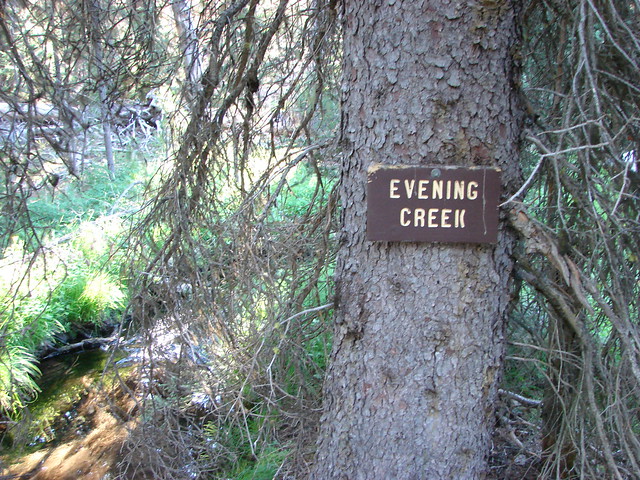 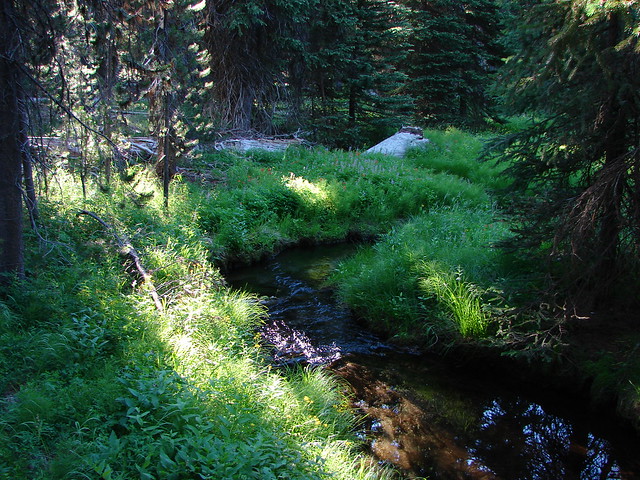 On the far side of Evening Creek was the Maidu Lake Trail which would lead us uphill for 2 miles to the Pacific Crest Trail. 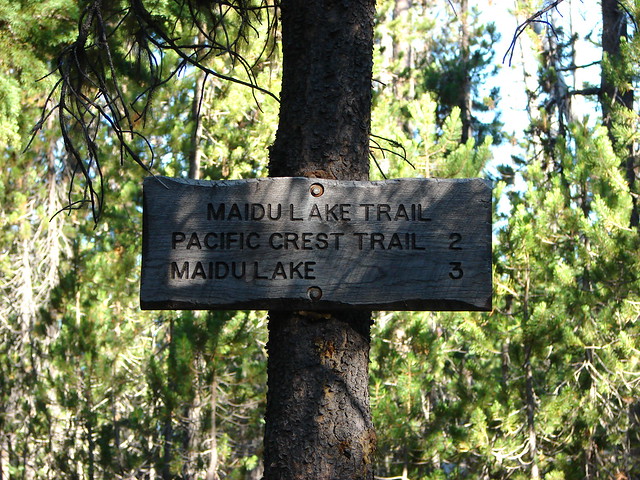 We turned left onto the Maidu Lake Trail and soon entered the Mt. Thielsen Wilderness. 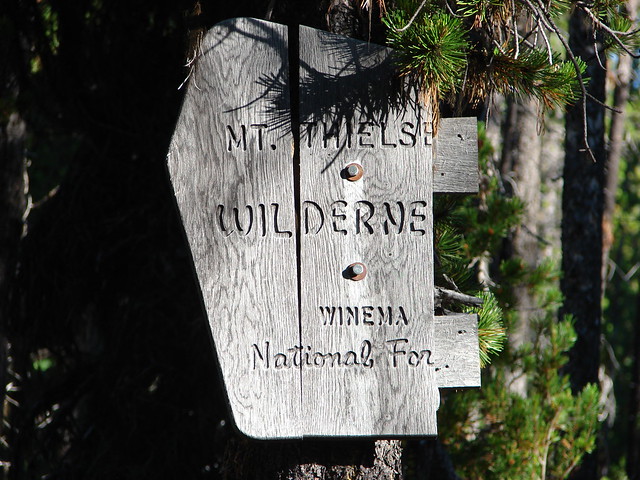 The trail climbed approximately 550′ to the Cascade Crest where it crossed the Pacific Crest Trail and continued another three quarters of a mile to green Maidu Lake. 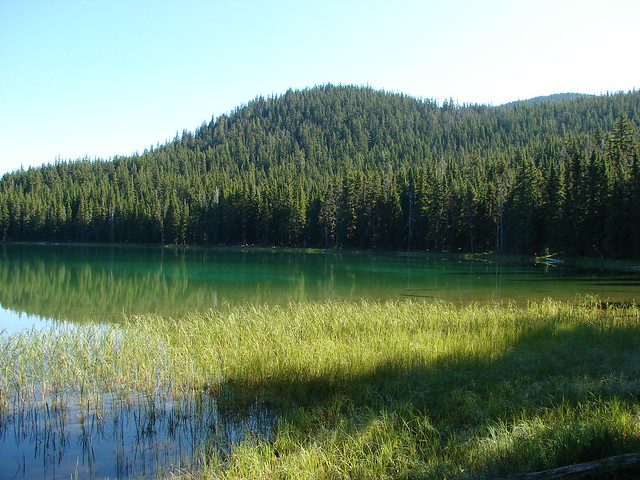 At the lake the trail split with the Maidu Lake Loop leaving to the left while the North Umpqua Trail was to the right. 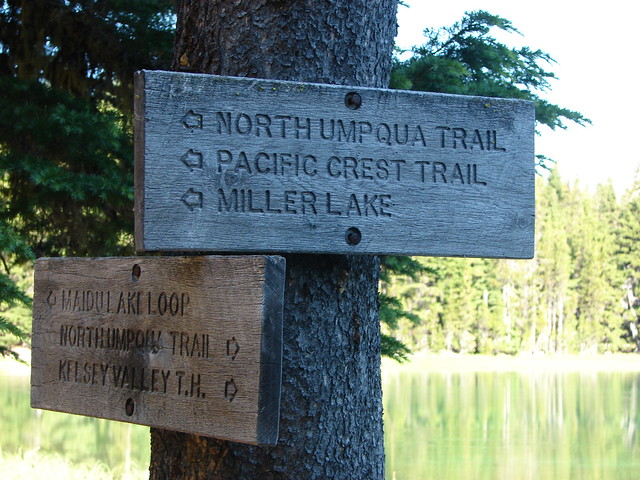 We went left passing along the west side of Maidu Lake for a half mile before rejoining the North Umpqua Trail on the north end. The mosquito situation was better up on the crest and we decided to visit one more lake before heading back. We followed the North Umpqua Trail along the forested ridge for .7 miles to a viewpoint. To the NW the Diamond Peak rose between to lesser peaks. Sawtooth Mountain rose to the left and the spire of Cowhorn Mountain rose to the right of the larger snow covered peak. 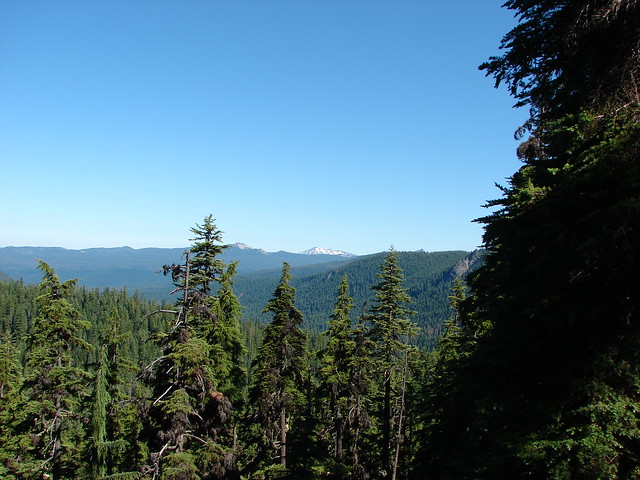 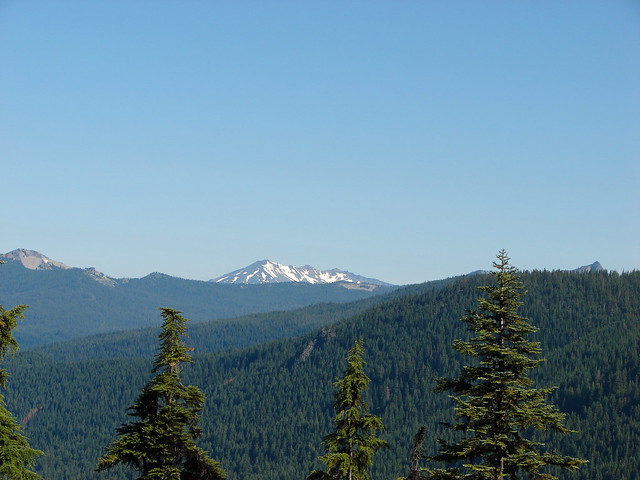 A half mile beyond the viewpoint we came to Lucille Lake which we hiked around on a .7 mile path. 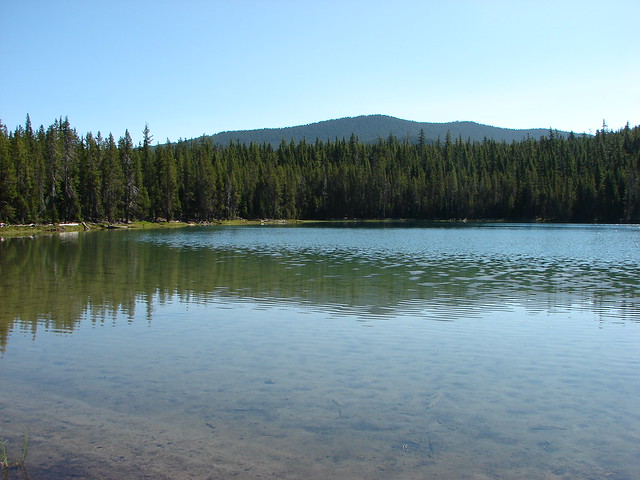 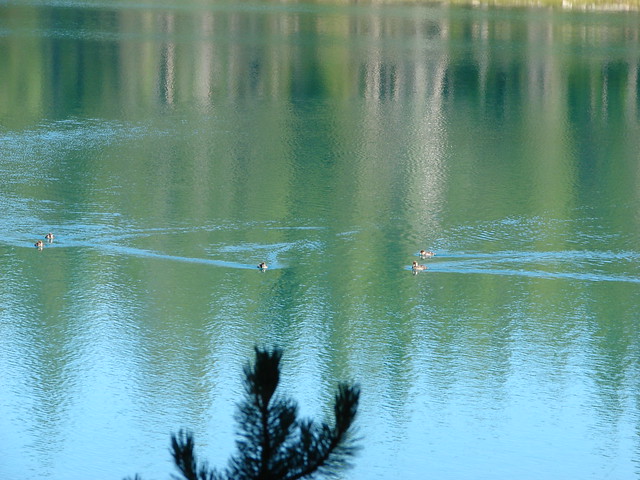 We returned to Maidu Lake and this time stuck to the North Umpqua Trail on the east side of the lake. The view was better on that end of the lake with Tipsoo Peak rising above the forest. 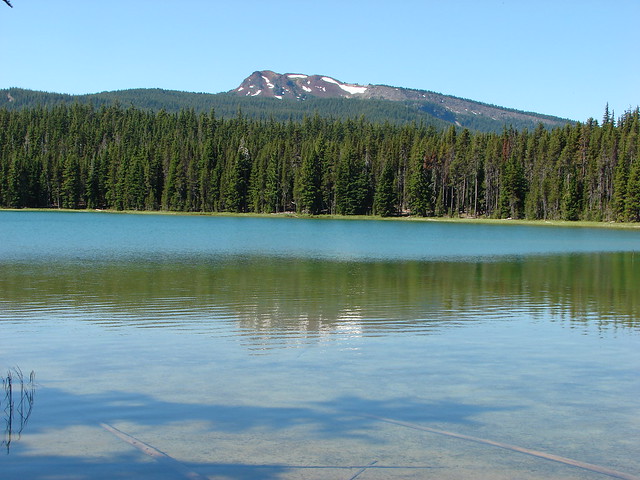 We made one side trip on the way back hiking north along the PCT for just under 3/4 of a mile to a viewpoint above Miller Lake’s glacial valley. 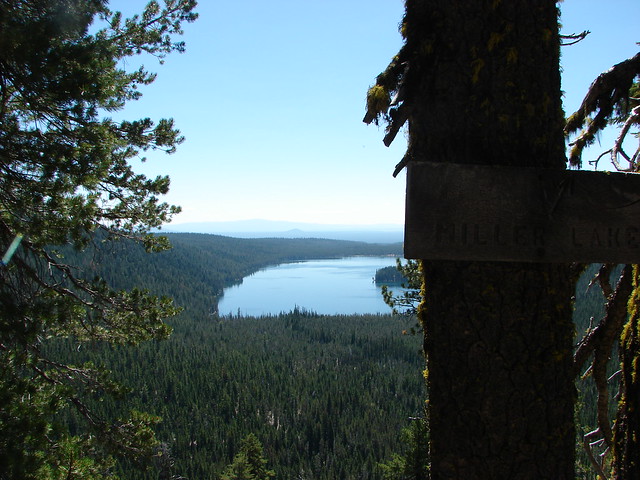 The mosquito situation had not gotten any better in this section and we hurried down from the PCT to the point of jogging. That turned out to be a poor choice. After running a 5k the prior Saturday, hiking 11.5 miles on Sunday, 5.8 on Monday, 12.4 on Tuesday the 10+ we’d done this day was just too much for my right leg. Something popped as I was running downhill and although it wasn’t too painful I knew something was wrong. For the next month my right knee/leg would stiffen up shortly after any running and it wasn’t too excited about going downhill for the better part of the next year. Although it didn’t stop us from hiking it did sideline my running after suffering through the Sunriver Half Marathon in September.

A little research revealed that driving can put additional strain on your IT Band which is what we believe I had irritated and I had done almost all the driving to and from the trailheads that week. We’ve since instituted a one-way driving rule where I get us to the trailheads and Heather drives us home.

One other rule that came as a result of this vacation was no more lake hikes in the middle of mosquito season. Happy Trails!