On our way home from Mount Shasta City we stopped for a quick hike to Pilot Rock in Oregon’s Soda Mountain Wilderness. We took exit 1 from Interstate 5 and drove north on Old Highway 99 for 6.9 miles to Pilot Rock Road (Road 40-2E-33) where we turned east. Instead of starting at the Pilot Rock Trailhead which is located 2 miles up the road we parked after a mile at the Pacific Crest Trail crossing. (If you do start here be sure not to block the private driveway.) 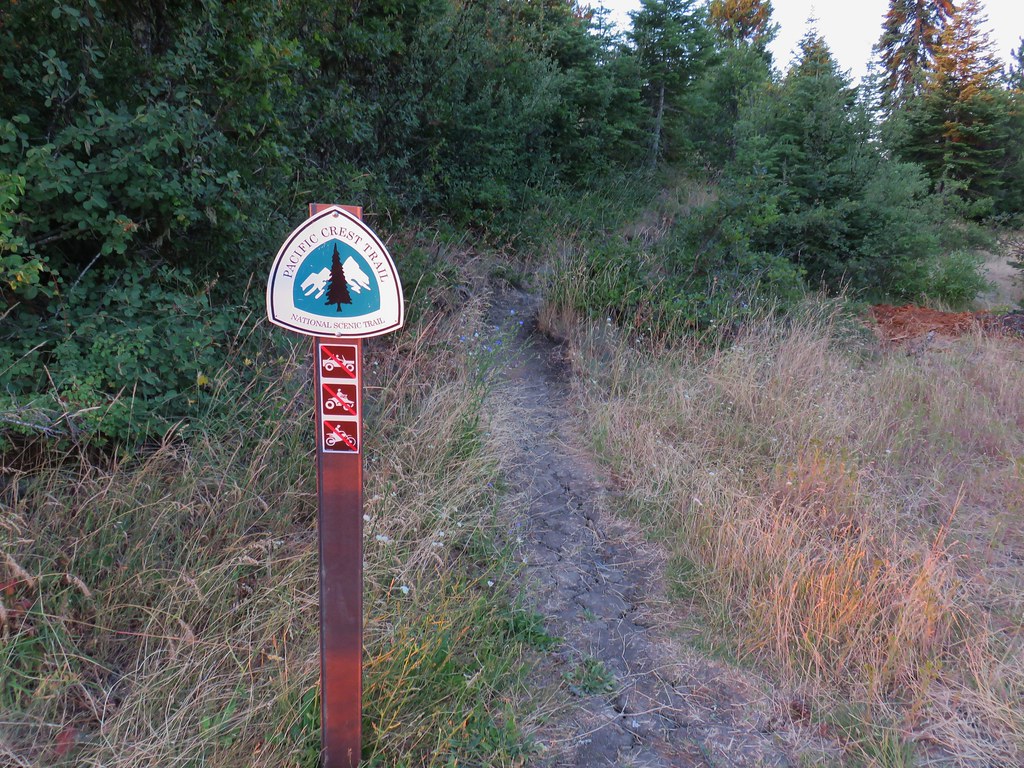 From the road Mt. Ashland to the west and Mt. McLoughlin to the north were visible in the morning light. 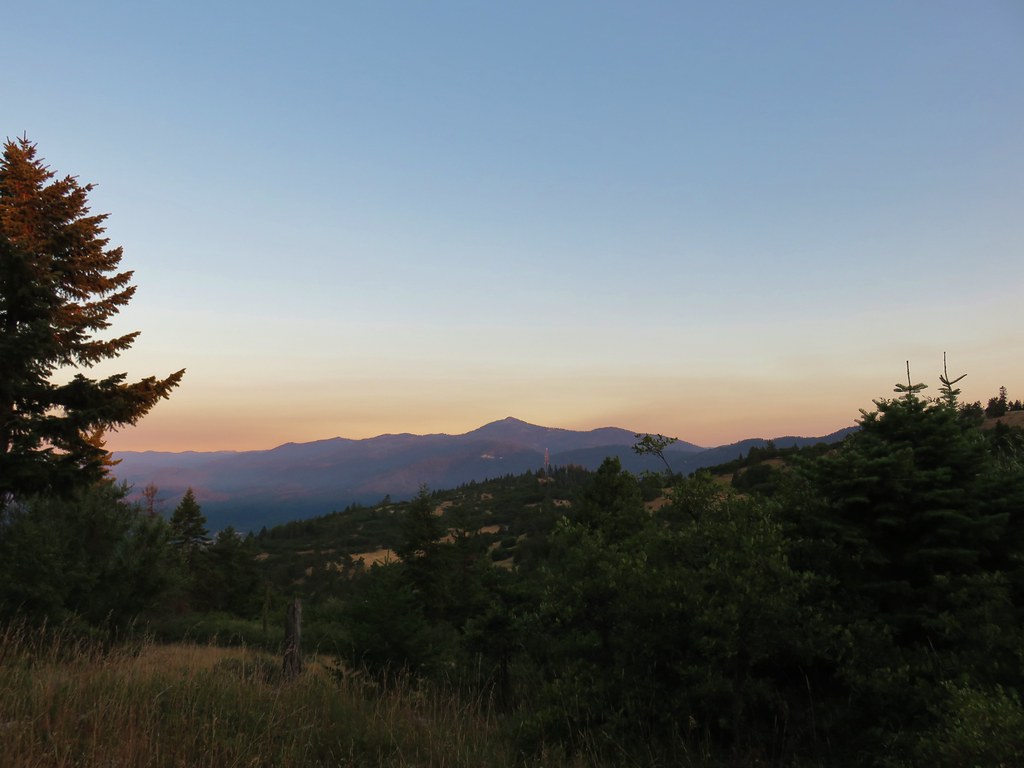 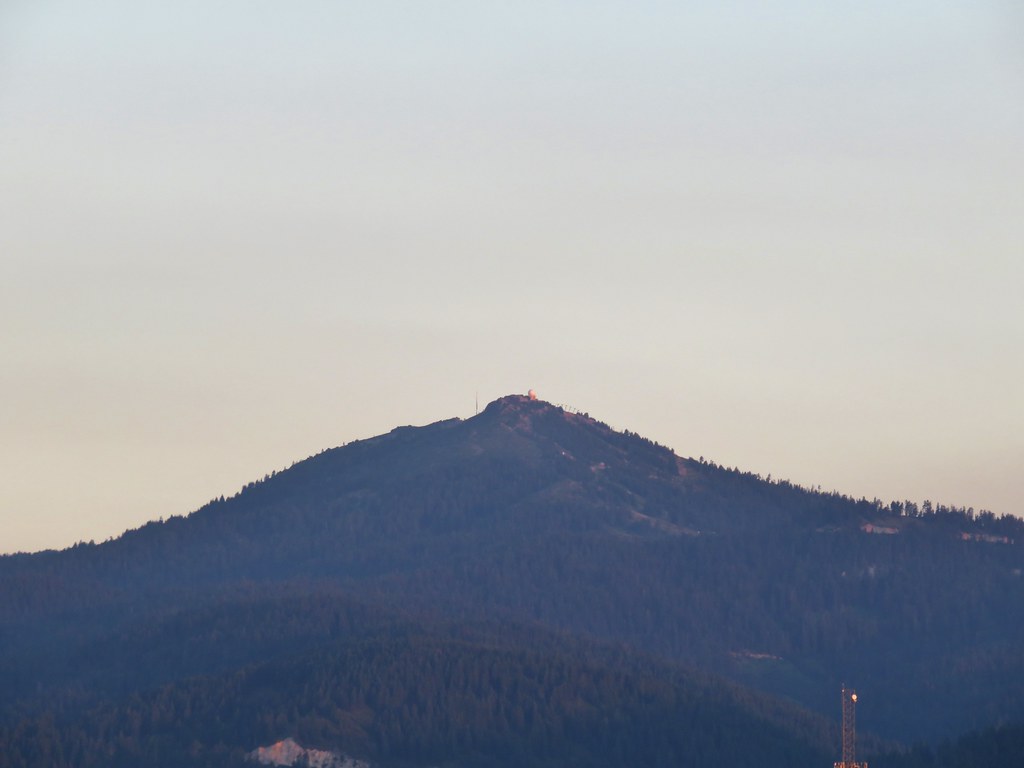 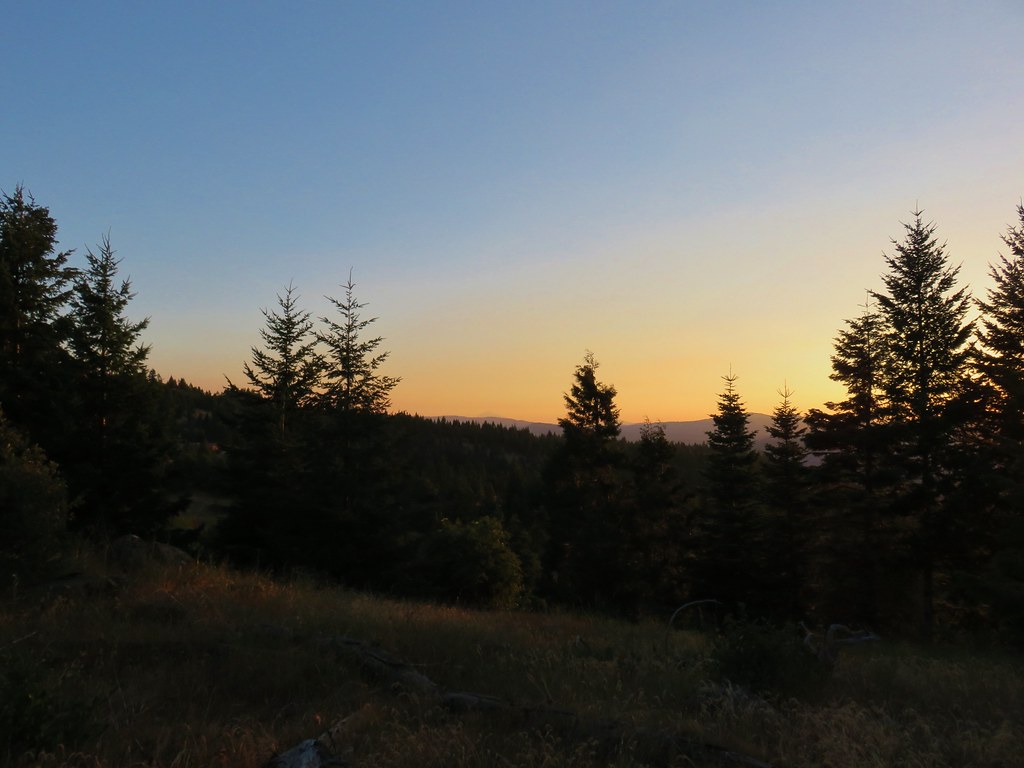 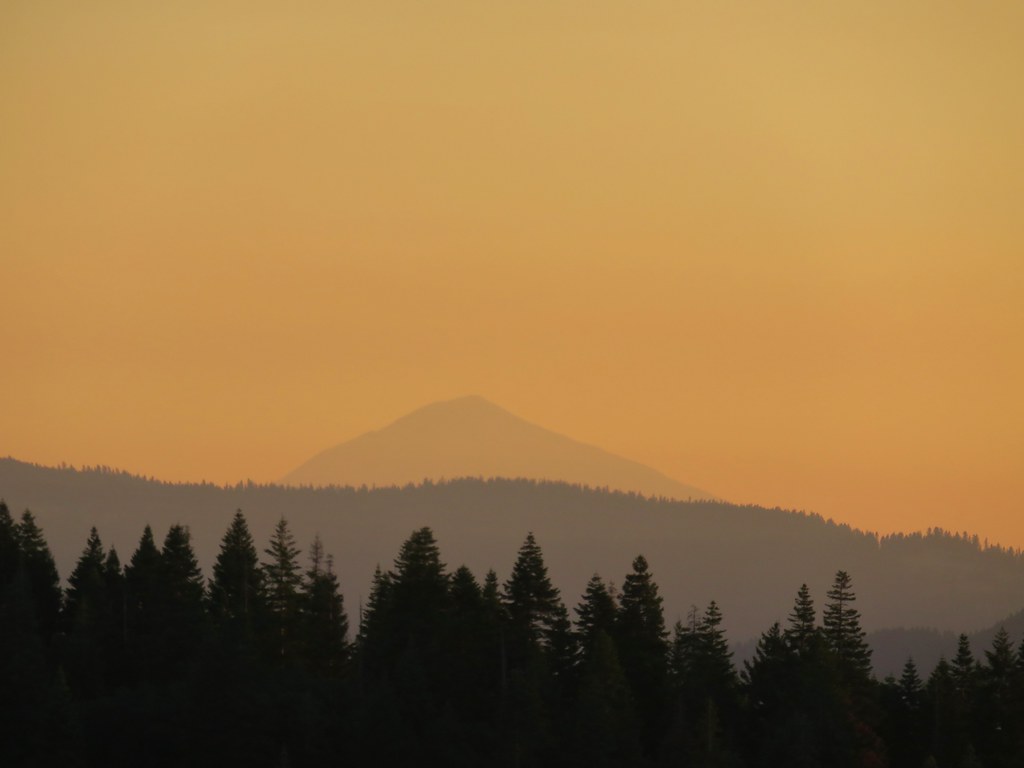 We headed south on the PCT (which ironically meant we were going northbound due to the route the trail takes after crossing I-5). 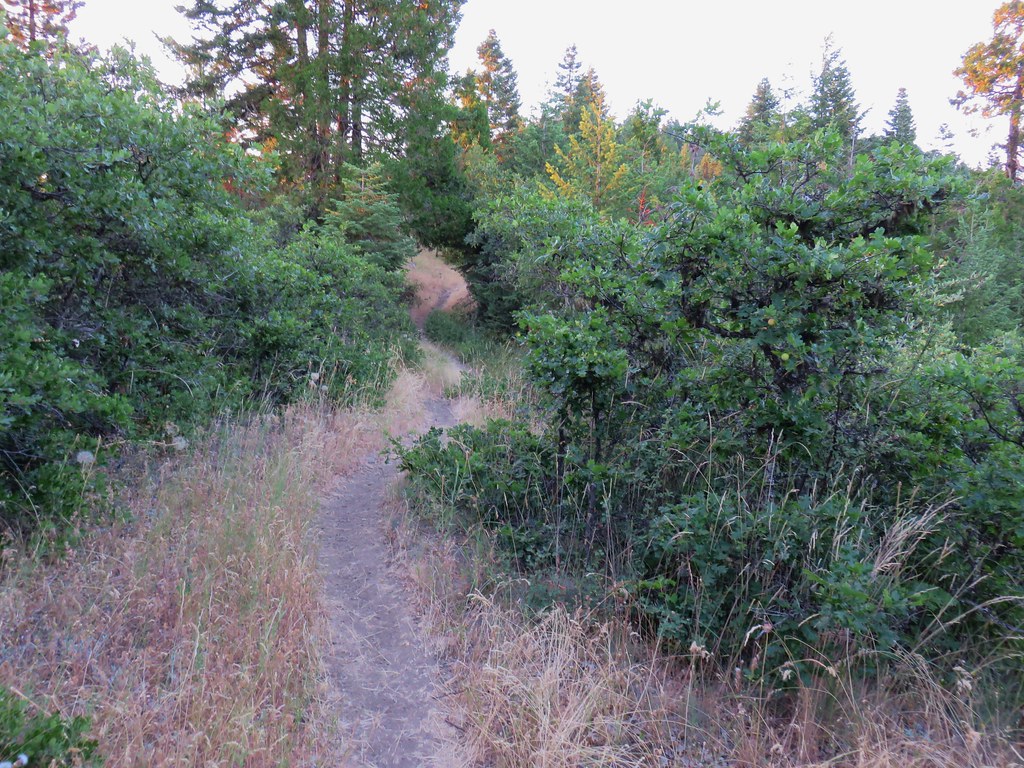 Most of the flowers were finished but by the looks of things there had been quite a few. A number of late bloomers remained and along with those were some juicy thimbleberries. 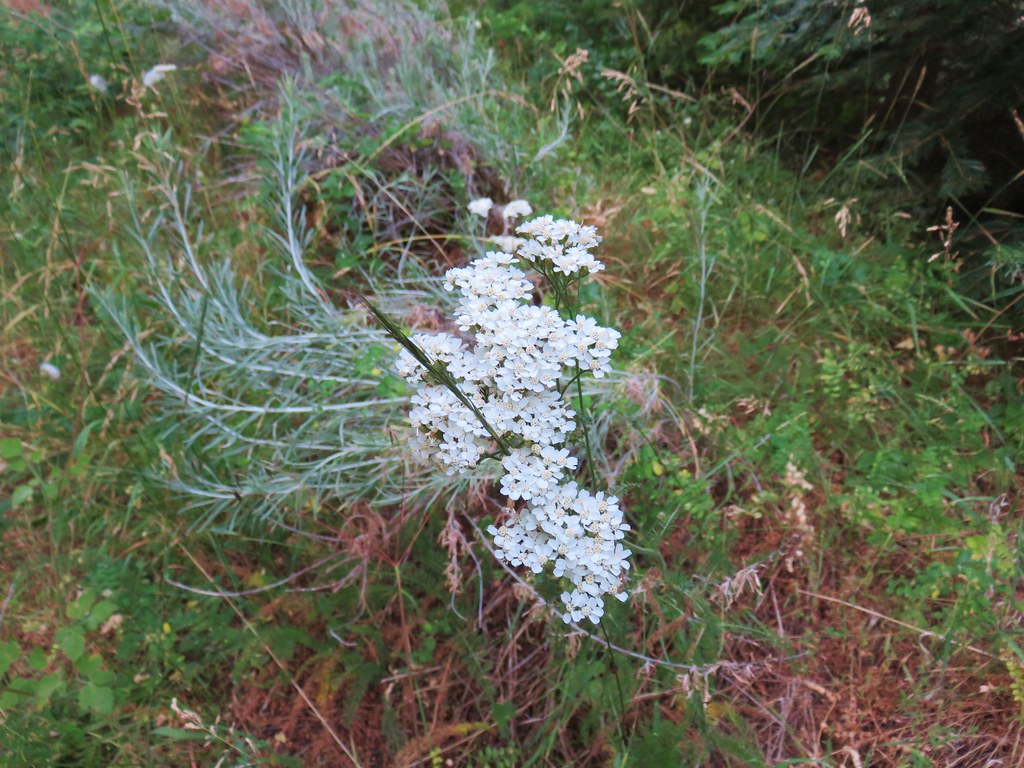 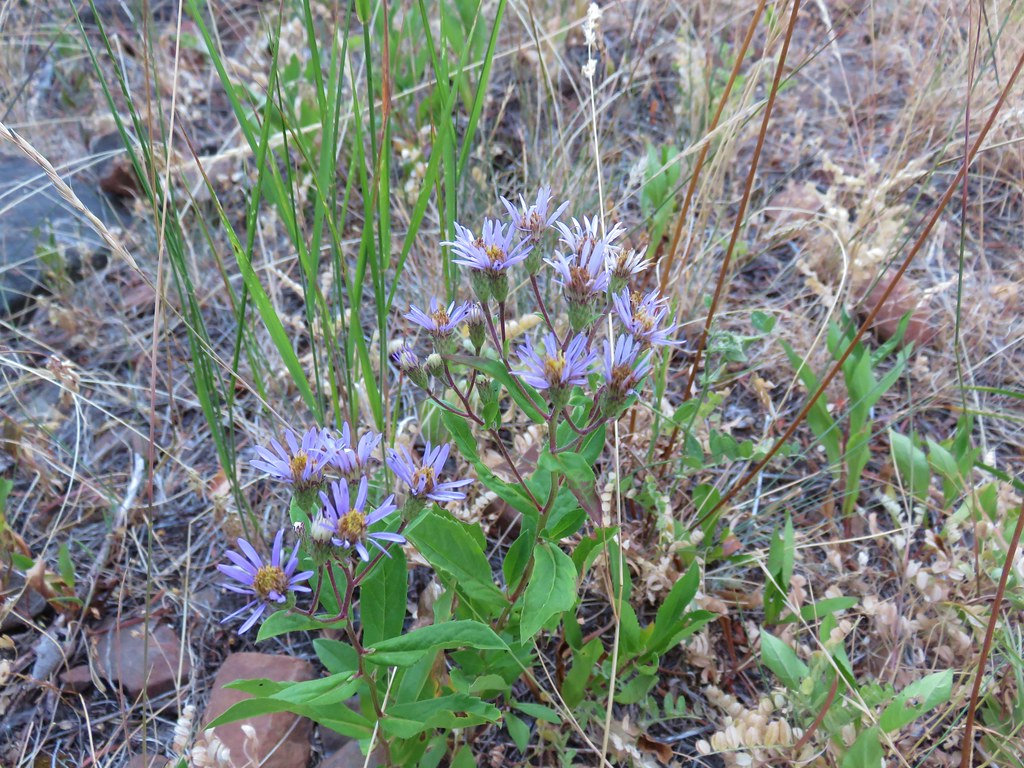 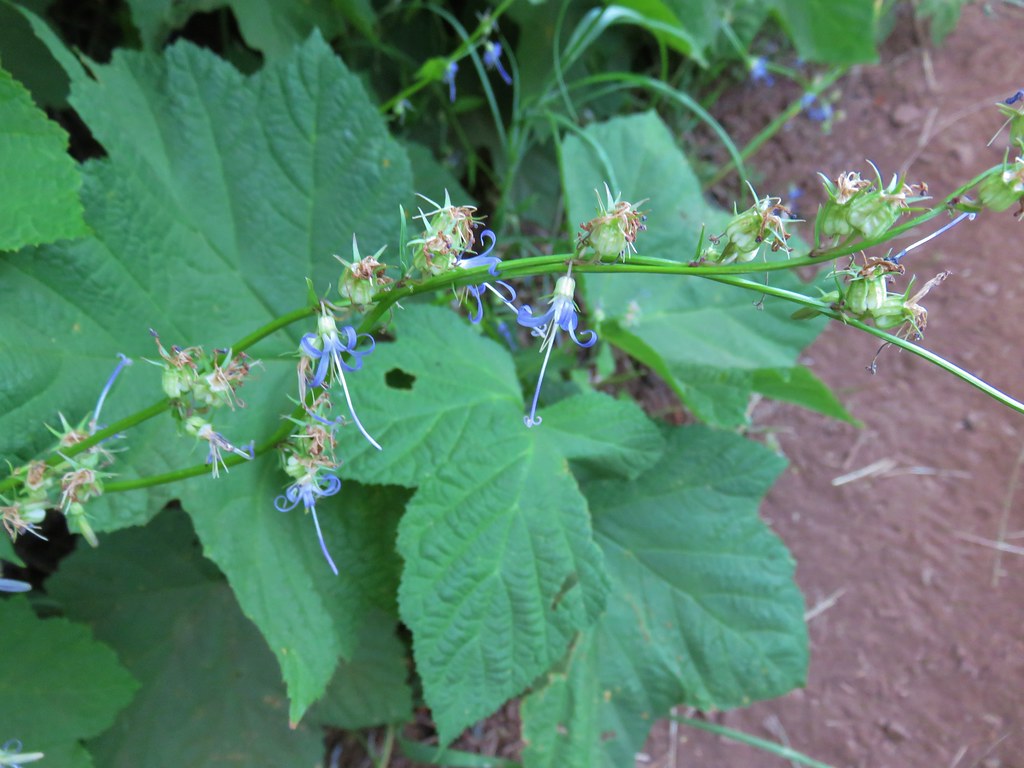 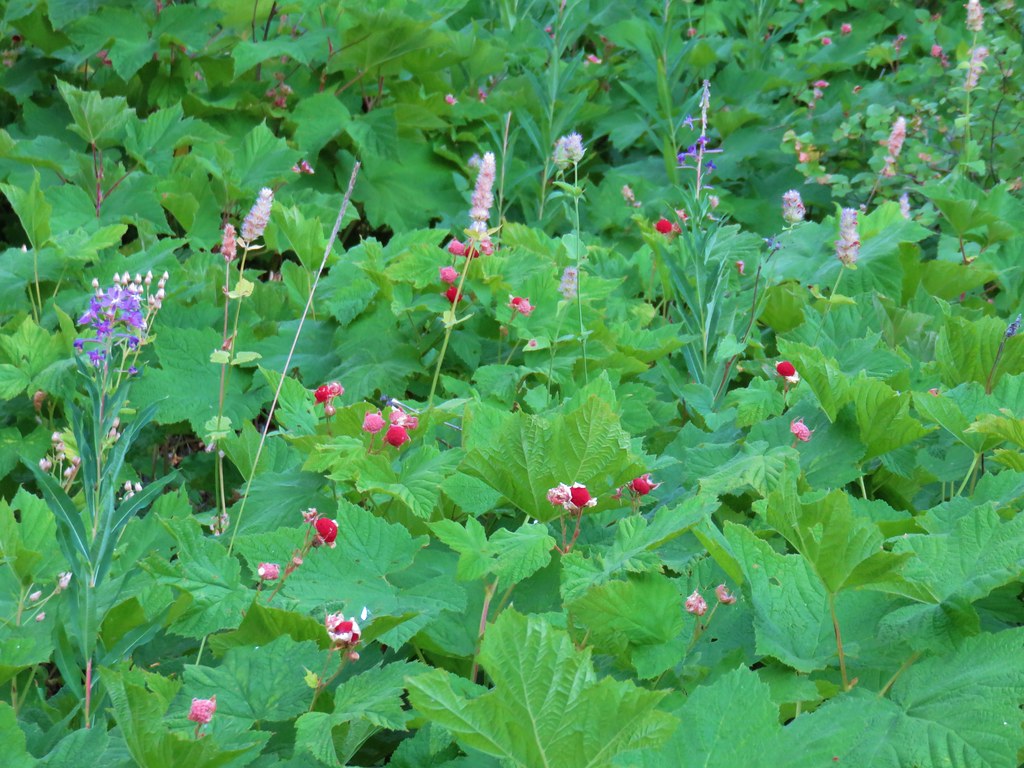 Aside from a couple of very short uphills the trail seemed fairly level and after about 3/4 of a mile Pilot Rock came into view. 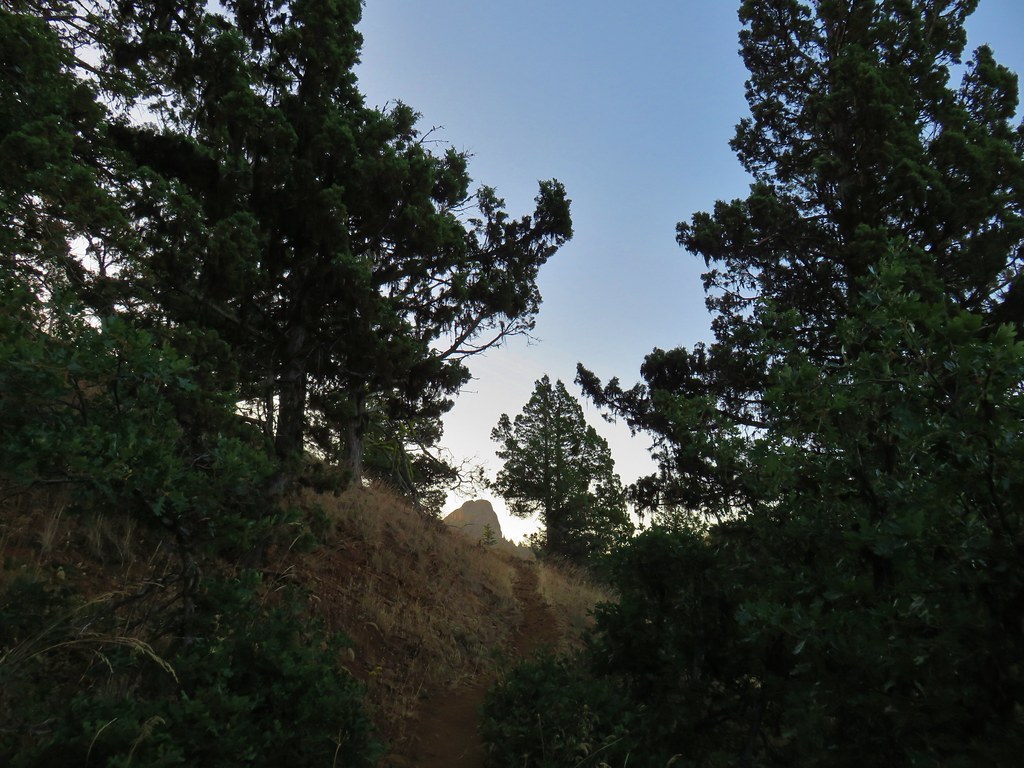 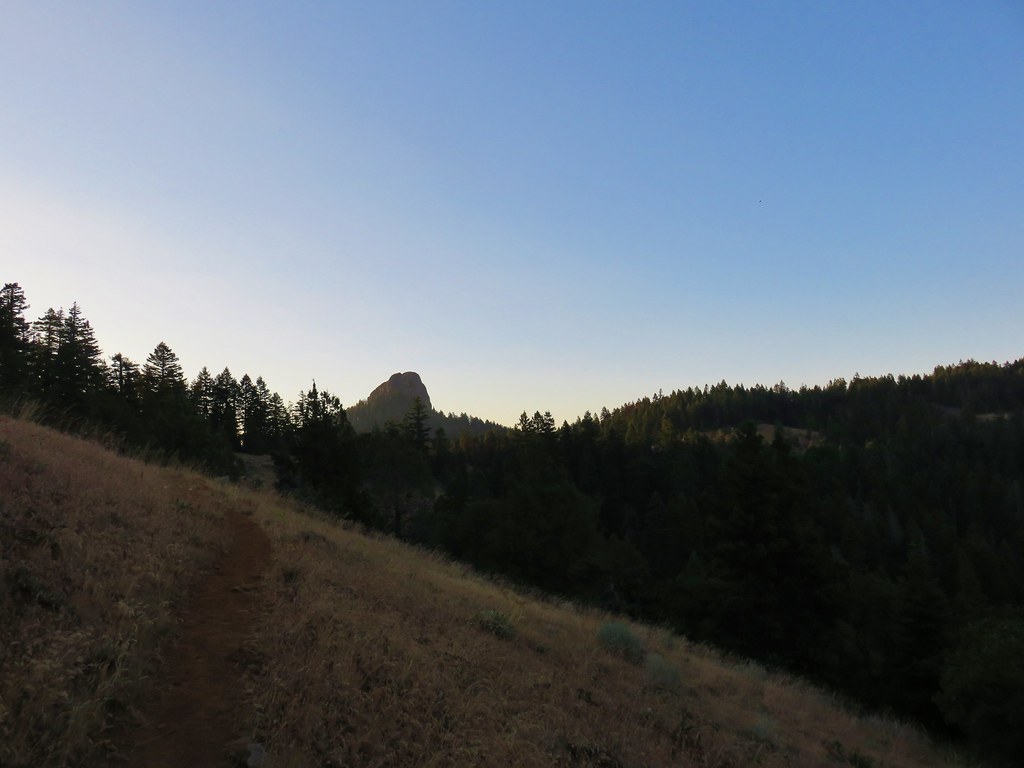 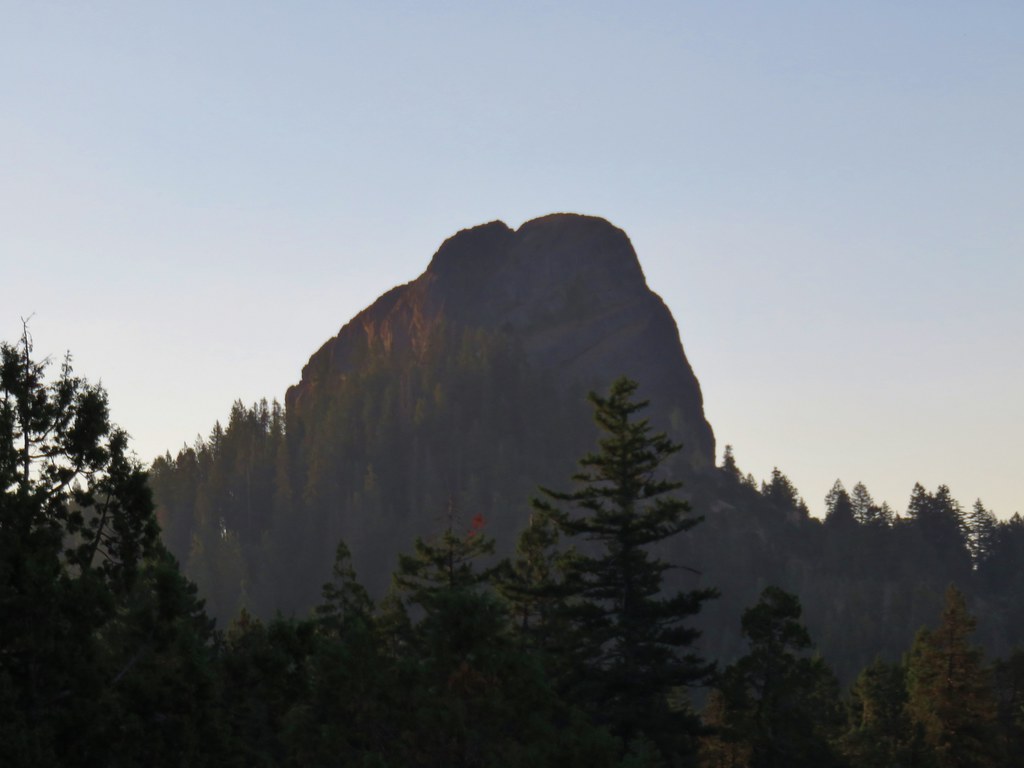 After another .9 miles we arrived at a junction with the closed road that serves as the trail from the official Pilot Rock Trailhead. 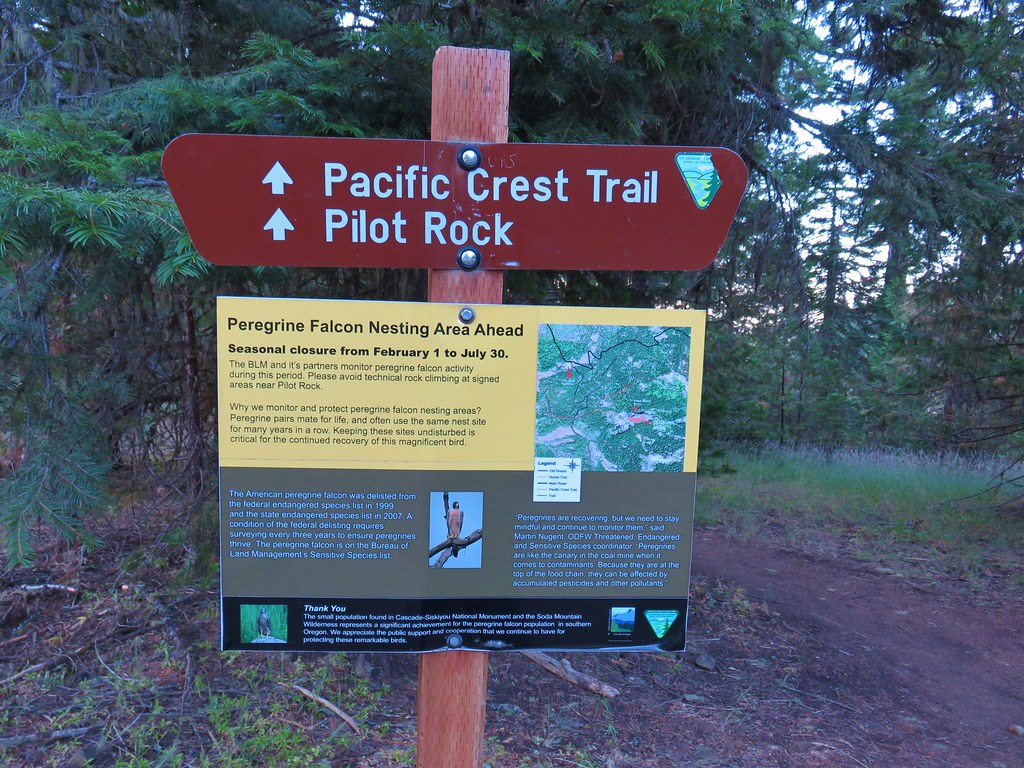 The two trails joined for .2 miles passing through a nice forest before splitting once again. 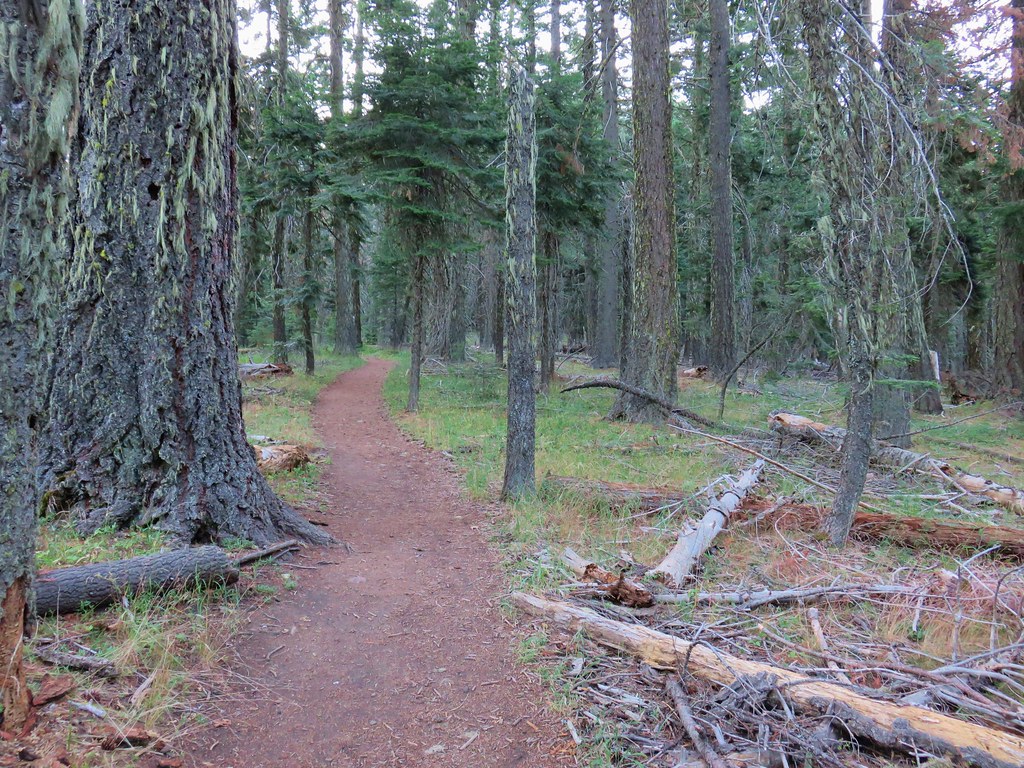 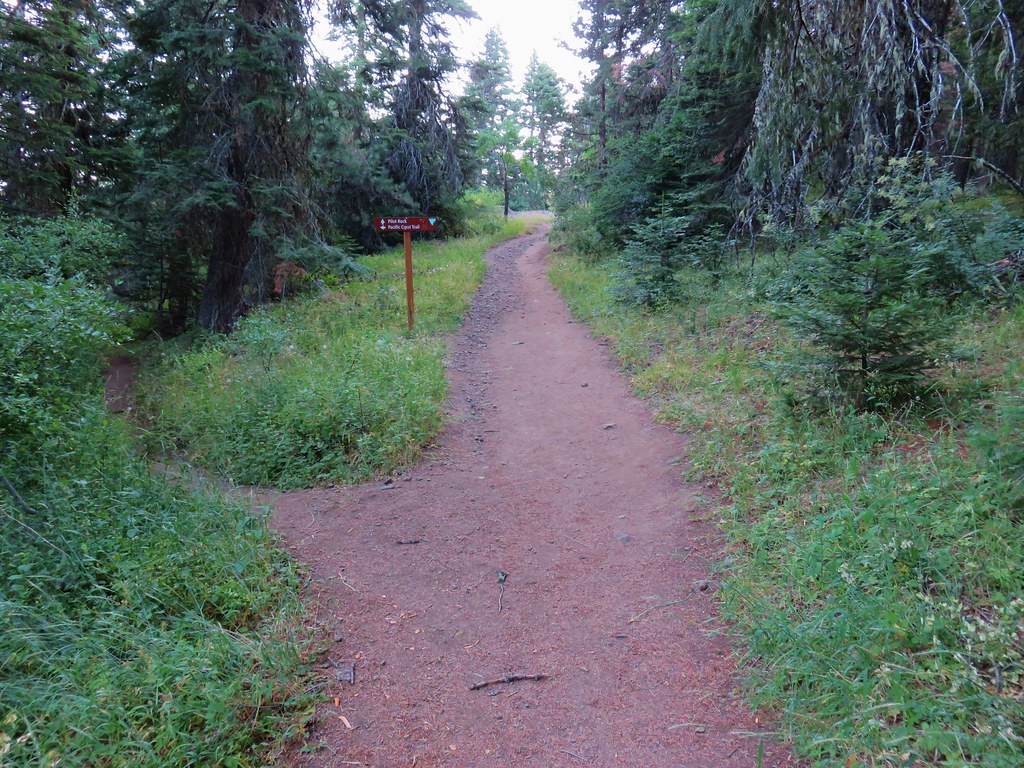 We forked to the right following the Pilot Rock pointer. This trail was much steeper and we climbed about 600′ in .7 miles to the base of Pilot Rock. 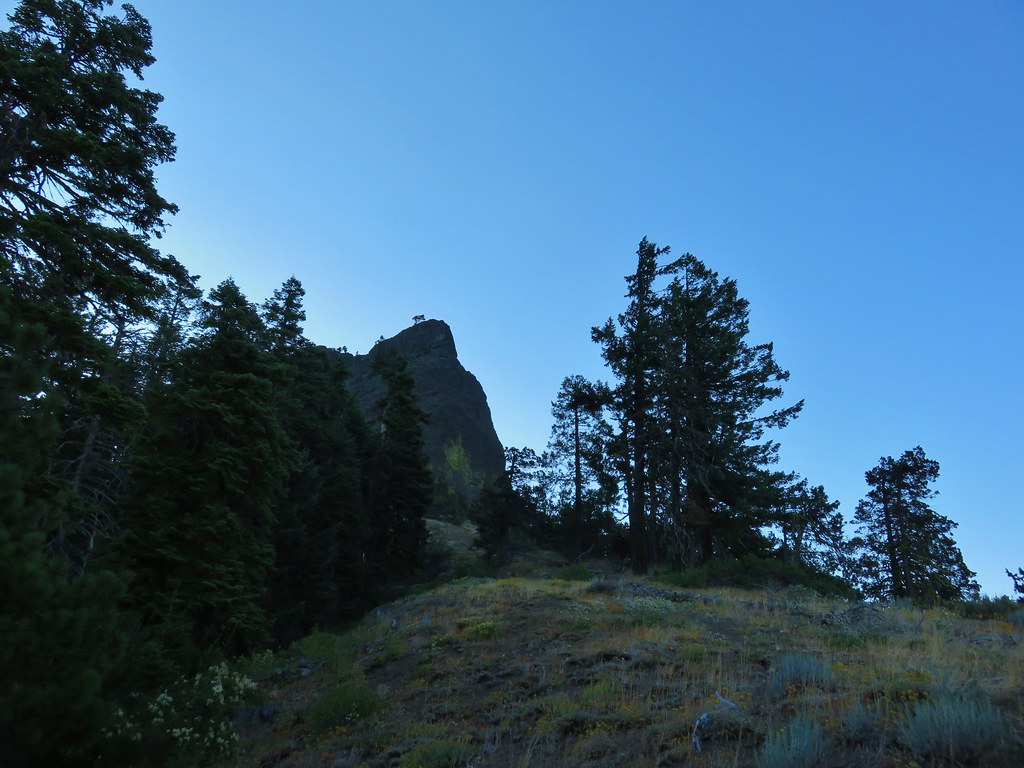 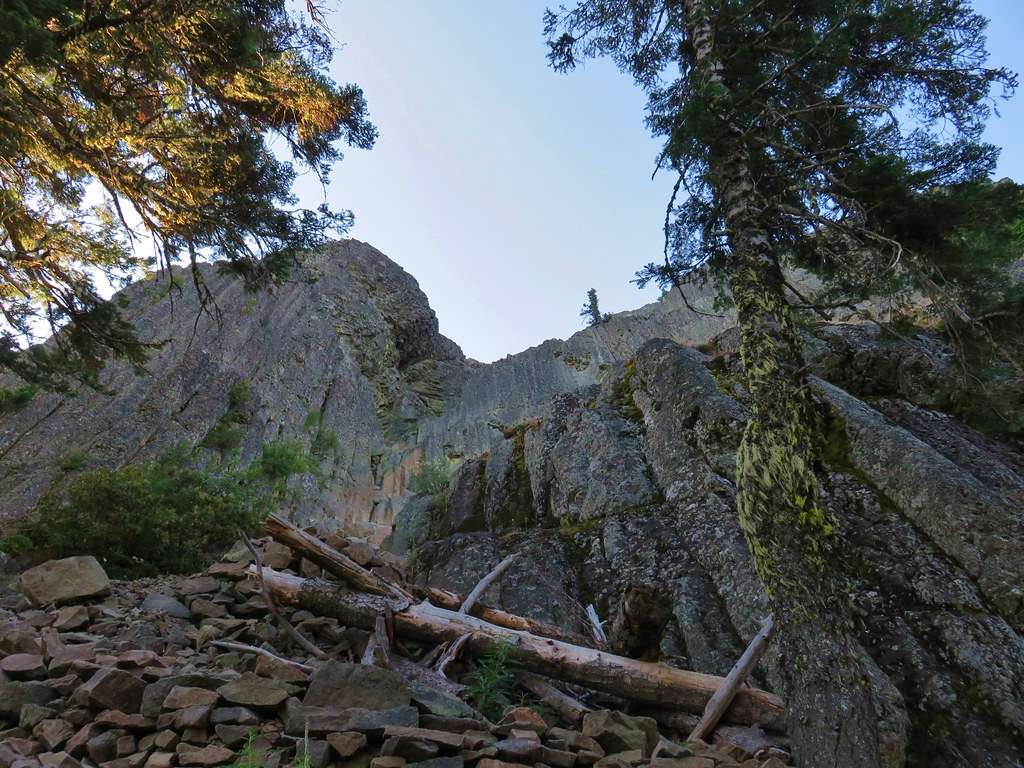 In a perfect world we would have scrambled up to the top of the rock which wasn’t that much higher, but after hiking 80 plus miles and climbing at least 20,000′ over the previous 7 days we weren’t sure that we had the strength and muscle control left to safely climb to and descend from the top.

Rather than risk it we stopped just below the first section where we definitely would have need to use our hands to go any higher. 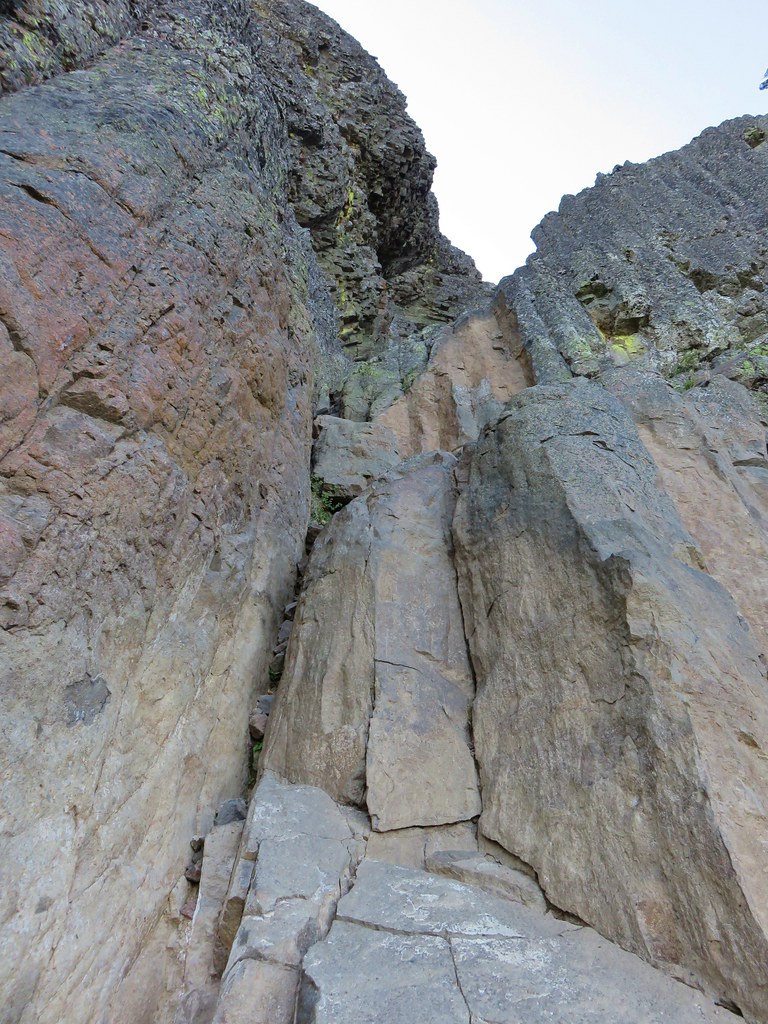 We returned the way we’d come. Starting at the PCT put the hike at a little under 5 miles a little less than double what it would have been from the Pilot Rock Trailhead with some nice scenery which would have been even better earlier in the year when the numerous flowers were still in bloom. Happy Trails!

It looks like you guys had a great trip! I hope you enjoyed the Mount Shasta area and that you’ll come back again sometime! Thanks for mentioning my book too! I really appreciate it!

We’ll definitely be back, still a lot there to get too. Couldn’t have asked for a better experience this time around, thanks for the suggestions too, they were great additions to the hikes.