For this week’s throwback we’re going back to September 22, 2012 for our visit to Mt. Thielsen. When we had summited Mt. Bailey a little over a month before when we had been on the opposite side of Diamond Lake. These two mountains couldn’t look much different. The summit of Mt. Bailey was a walk up, albeit a steep one while the pointy summit of Mt. Thielsen is only accessible via a final 80′ vertical class 4 scramble. We weren’t planning on even attempting the summit, we just wanted to go as far as possible which would be a higher elevation than we had been at on Mt. Bailey.

We parked at the Mt. Thielsen Trailhead off of Highway 138 and set off toward the old volcano. 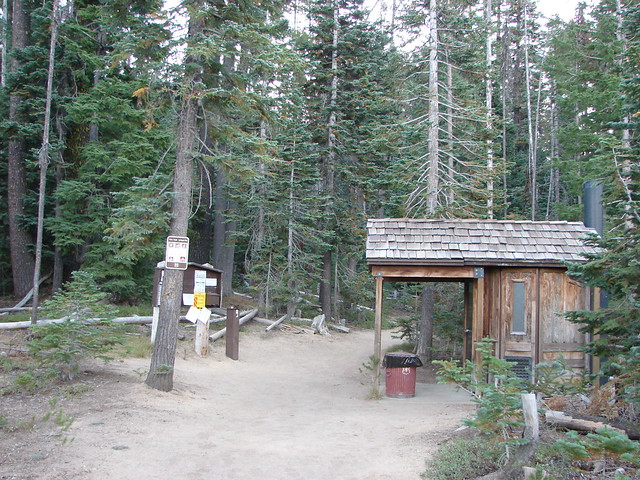 The trail climbed through a forest filled with blowdown for 1.4 miles to a junction with the Spruce Ridge Trail. 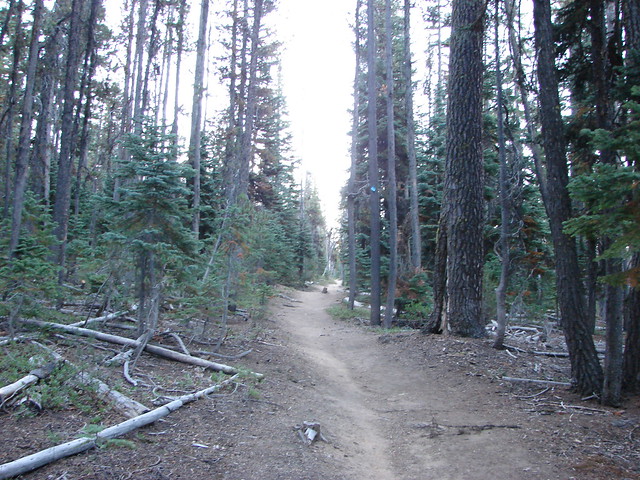 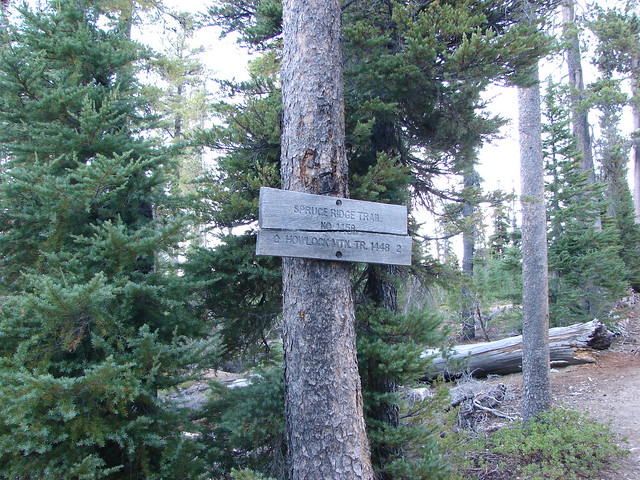 Mt. Thielsen was hidden from view along this section but looking back across the highway we had a decent view of Mt. Bailey in the morning sunlight. 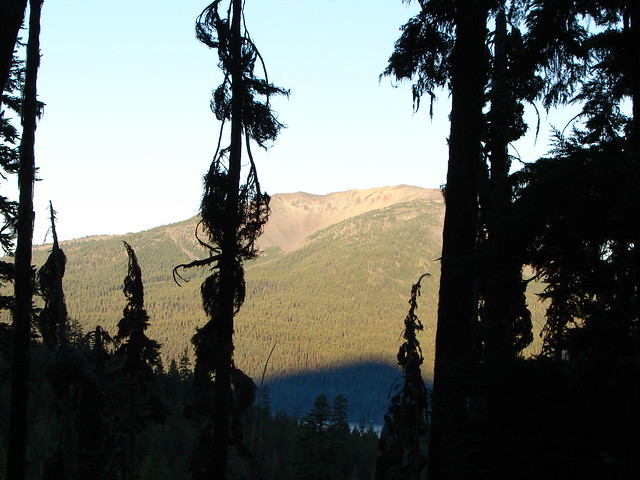 We continued past the Spruce Ridge Trail gaining a view of Diamond Peak to the north. 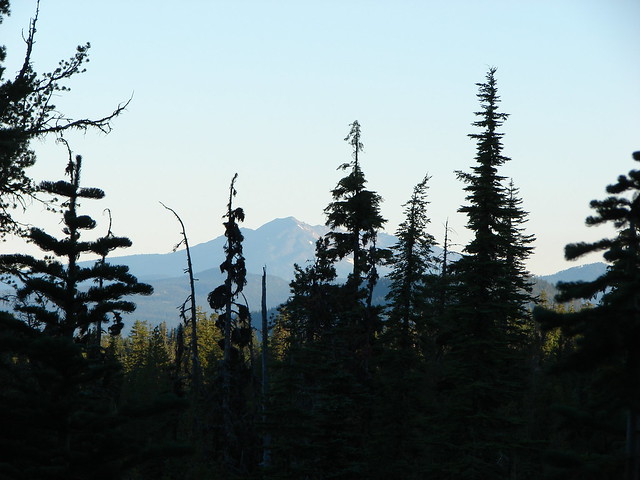 Soon the spire of Mt. Thielsen came into view through the trees ahead. 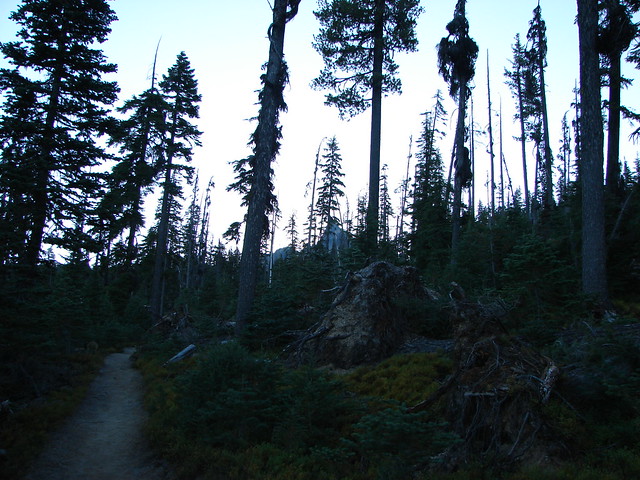 The trail then entered the Mt. Thielsen Wilderness and a section of forest that had been struck by massive blowdown. 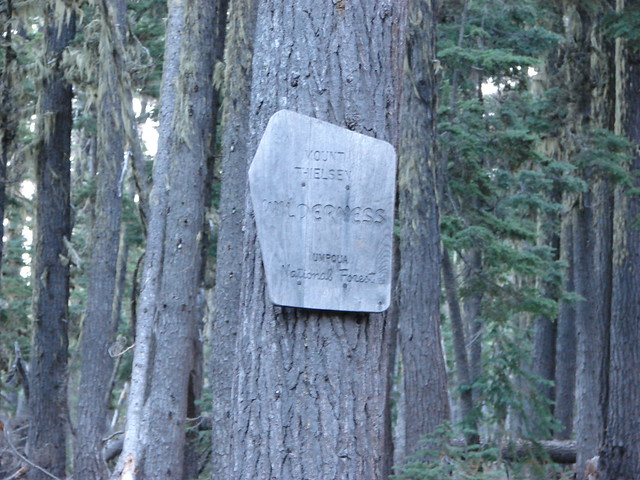 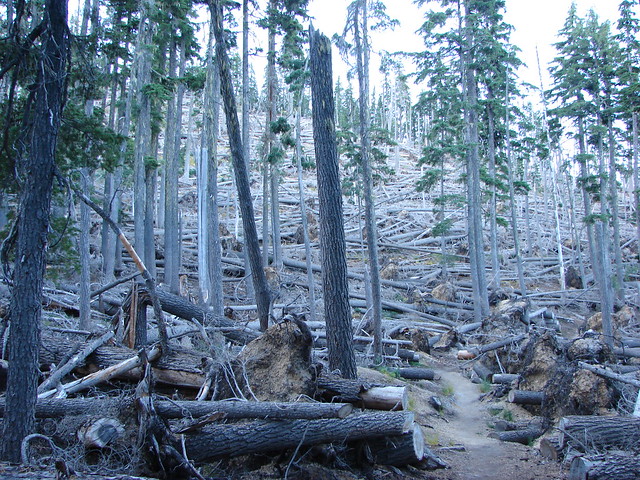 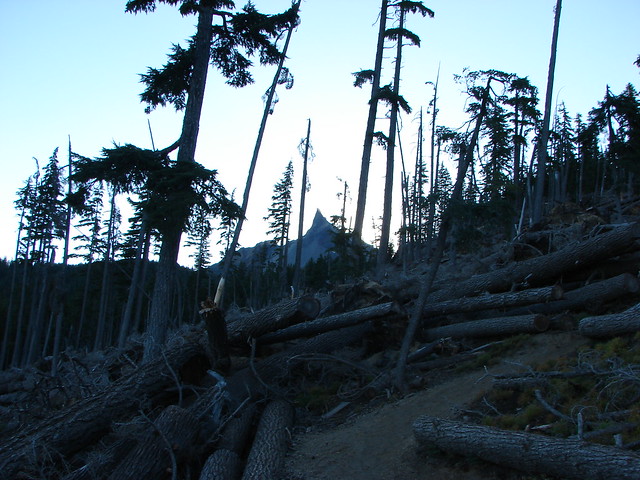 After passing through the blowdown the trail followed a ridge with increasingly better views to the Pacific Crest Trail 3.8 miles from the Trailhead. 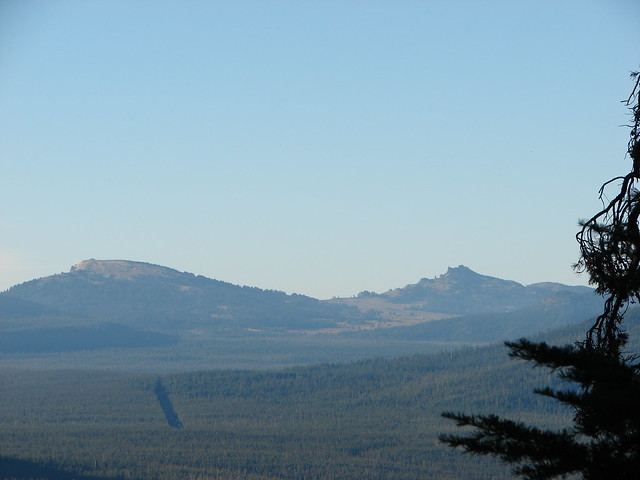 Llao Rock and Hillman Peak along the rim of Crater Lake 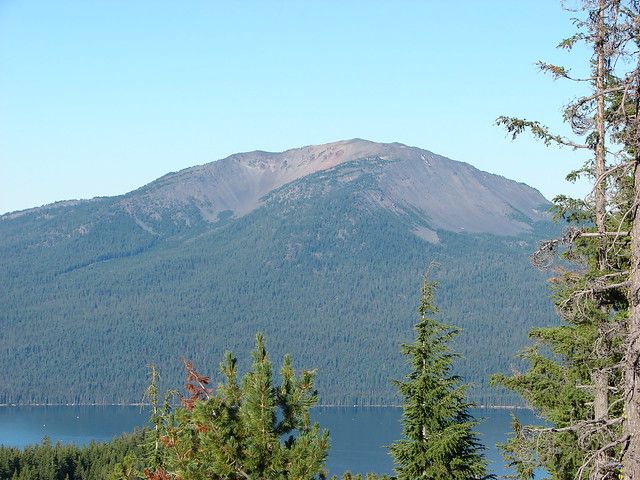 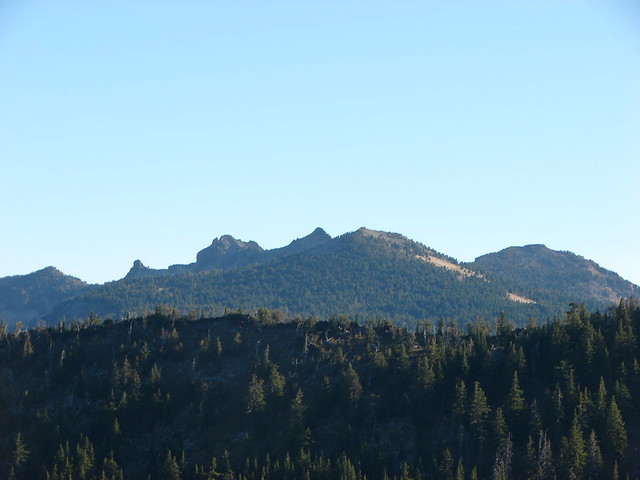 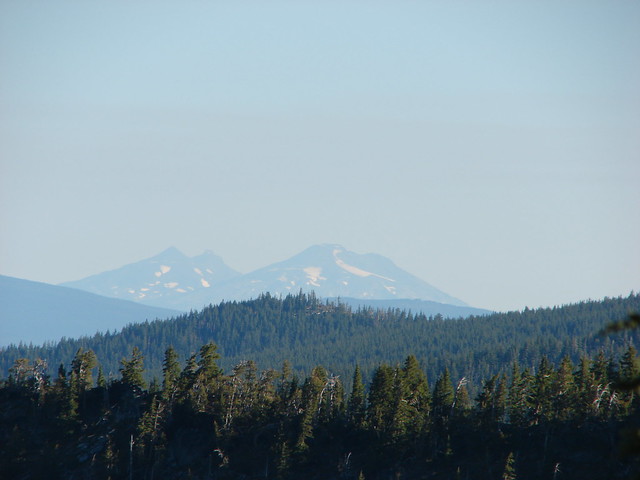 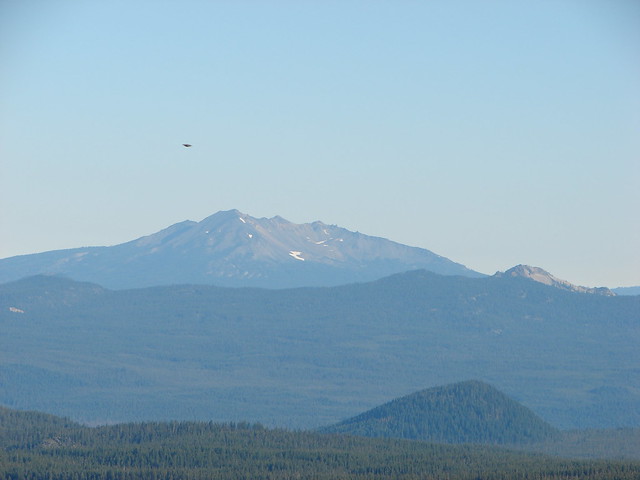 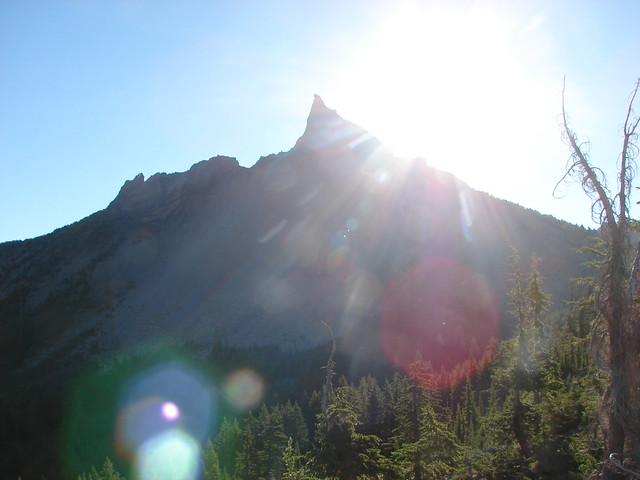 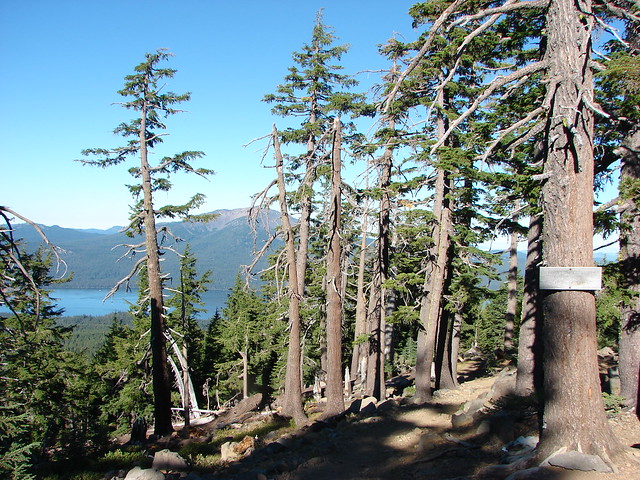 Junction with the Pacific Crest Trail

The official trail ends at the PCT but a clear climbers trail continued on the other side and we followed that further up along the ridge. The first part of the path led along the ridge with views of west face of the mountain revealing it’s swirling volcanic rock. 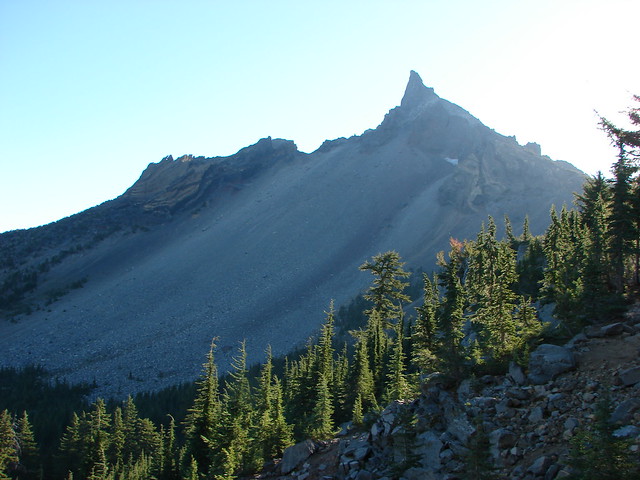 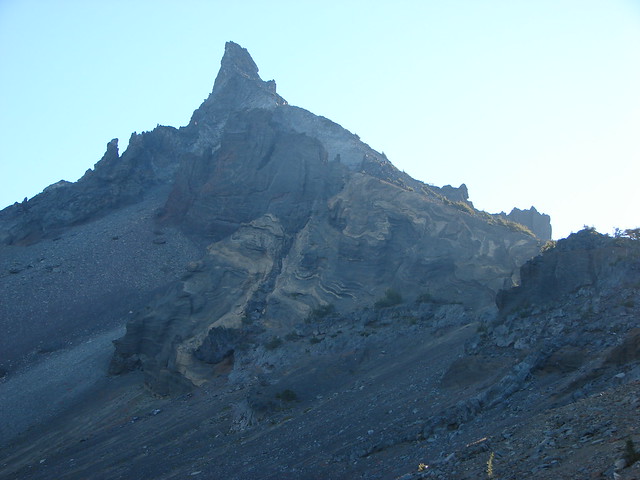 The path then bent slightly SE away from the sheer drop of the north side of the ridge and up a very steep slope of increasingly slippery scree. 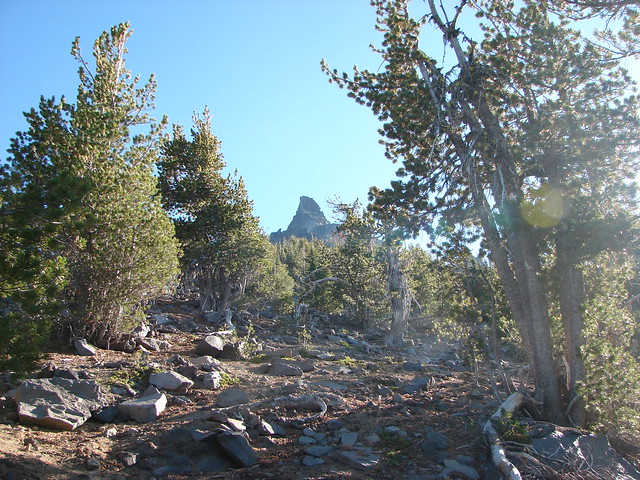 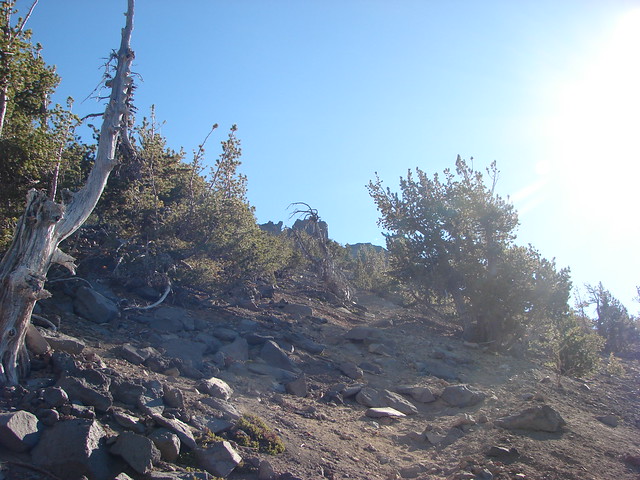 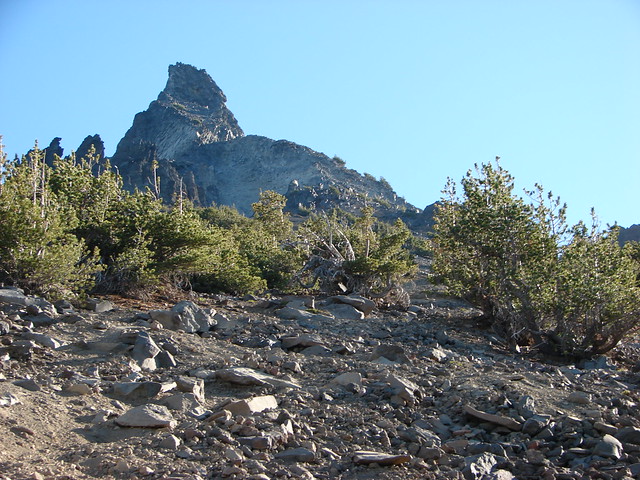 To the south the entire rim of Crater Lake was visible including Mt. Scott. 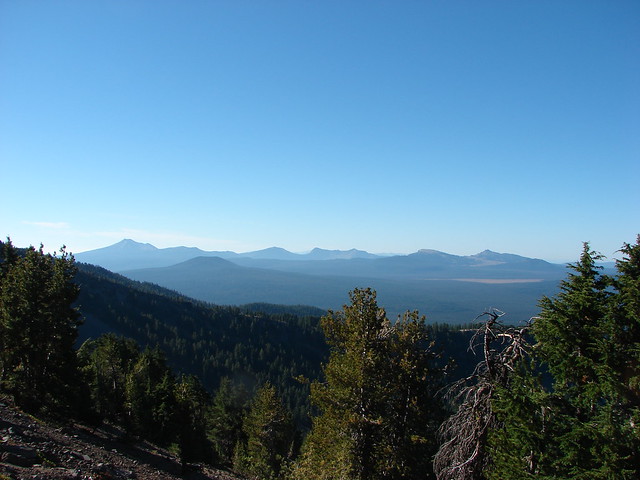 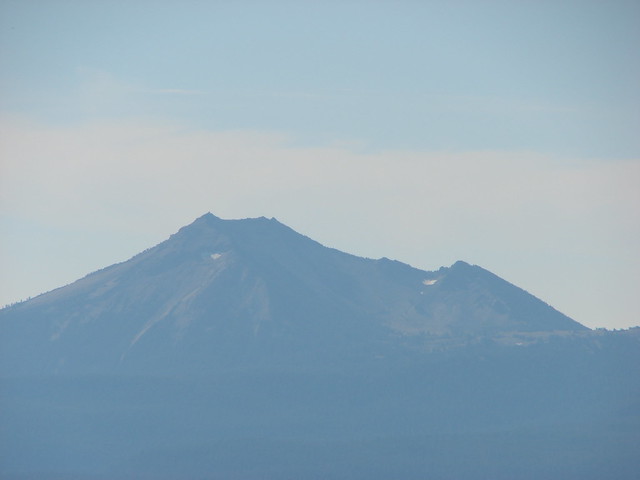 Braided trails crisscrossed up through the loose rock and every step seemed to come with a complimentary slide backward. Although the hike to Mt. Bailey had been steep it hadn’t been this steep nor slick and the drop offs along the way not nearly as daunting. 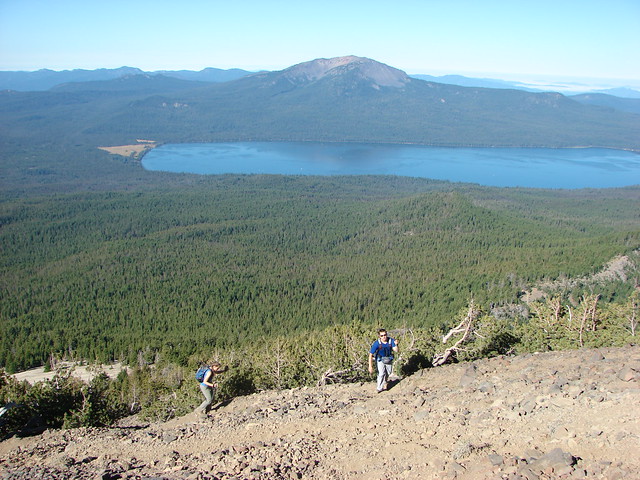 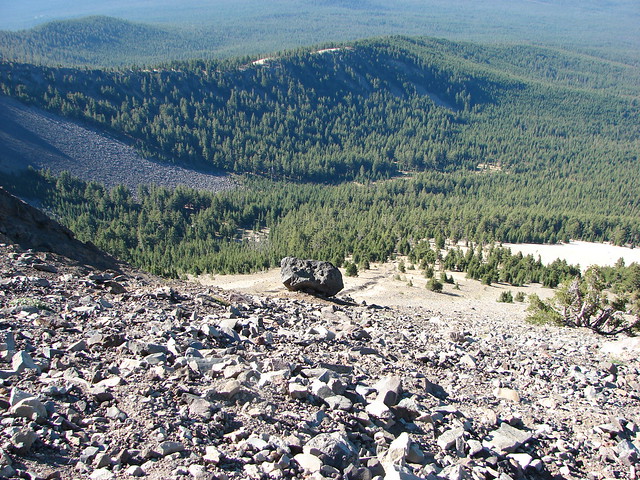 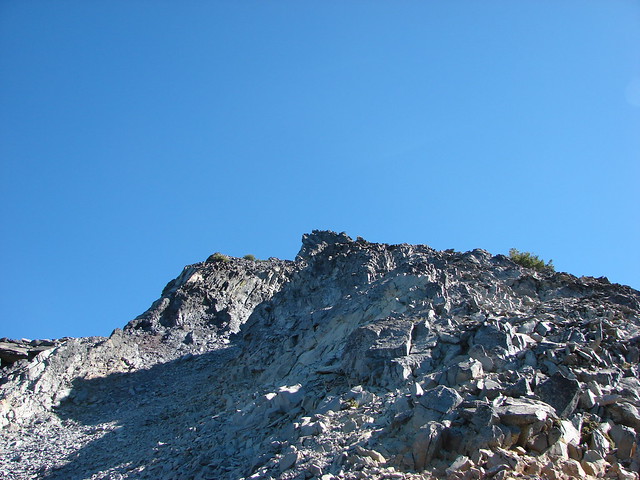 We were the first hikers up the trail that morning and at an elevation of a little over 8700′ I came to, what looked to me, to be an impassable wall of rock. 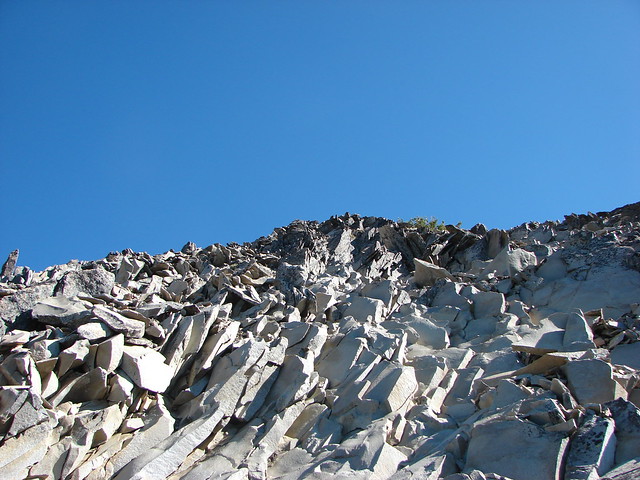 As I waited for Heather and Dominique I searched for signs of where to go from there. I was unsure of the correct route and the longer I stood in the same spot the more I took inventory of my surroundings. The view was quite impressive having now climbed high enough that Mt. McLoughlin was visible to the south of Crater Lake. 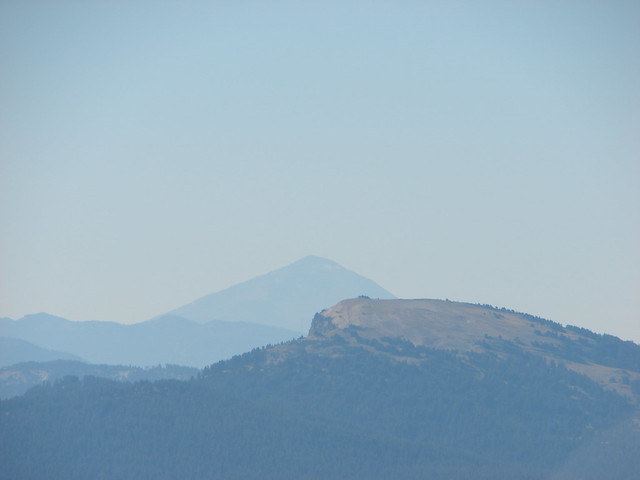 It wasn’t long before I started to feel just how high up we were and how steep the mountain was. At that point the nerves kicked in and butterflies filled my stomach. Apparently Heather and Dominique had begun feeling the same thing and when they were close enough to talk to we made a unanimous decision to turn back.

Shortly after starting back down a lone female hiker passed us going up. We stopped to watch her as she made her way to the point where I had turned around. We were curious to see how she would navigate the section. She didn’t miss a beat and was quickly above the spot and continuing on. We were only about a hundred yards down and I had to fight the urge not to go back and try again after she’d made it look so easy but I was apparently the only one fighting that urge so reason won the day and we continued our descent. 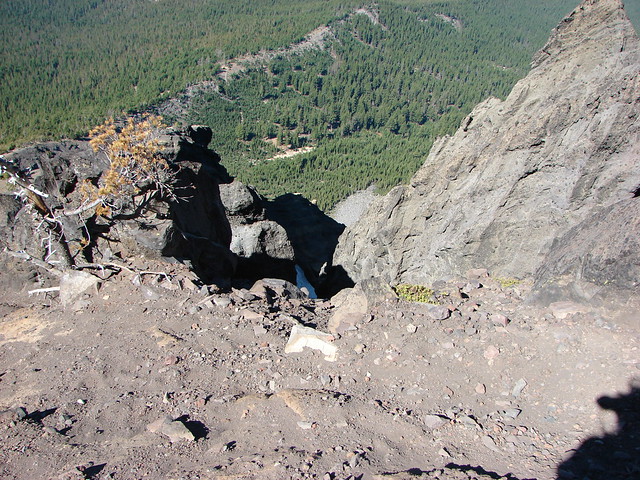 Not liking how close we were to the edge we veered back to the south having to cross a very loos section of scree where Dominique slipped and scratched himself up pretty good. That was the only incident though and we made it back to the trailhead in relatively good shape.

At the time it was the most nerve wracking hike we’d done. Not making it as far up as we’d hoped was a bit of a disappointment but it was a good reminder that knowing when to turn around (and being willing to do so)is important. After all if you keep yourself safe there’s always next time. Happy Trails!

[…] Soon we were back in Alkali Meadows and staring straight at Mt. Thielsen. (post) […]

[…] were a little less cloudy to the south where Cowhorn Mountain (post) and Mt. Thielsen (post) seemed to be cloud free while Diamond Peak wasn’t so […]

[…] were lots of views of Mt. Bachelor on the way down and we could also make out Mt. Thielsen (post) and Mt. Scott (post) further […]